The 2022 Volkswagen Golf R is still the handsome and mature hot hatch it’s always been, but this time around it’s even more capable and extra likely to put a smile on your face. Even if the car doesn’t outwardly look like it, the Mk 8 Golf R is a mammoth change among Golf generations. It brings VW’s little hatchback into the modern world with a touch of abandon and finally uses a proper, high-performance all-wheel-drive system, but is still packaged in the recognizable and friendly shape we all know and admire.

This Golf R is also only one of two Golf variants we’re getting in the United States for this generation. You read about the other one yesterday — the 2022 GTI — but there are no other versions of the Golf on their way. That means no standard Golf hatchback, Golf Alltrack or Golf Sportwagen. It’s hard to complain too much when VW still blesses us with the two spicy versions of its hatchback, but the wagons’ demise will continue to hurt our hearts.

Volkswagen did plenty to this new Golf R to help us forget about everything we’ve lost. The revised EA888 (now in the evo4 generation) 2.0-liter turbocharged four-cylinder makes more power, now boasting 315 horsepower and 310 pound-feet of torque, up 27 and 30, respectively. Power is routed through either a six-speed manual or seven-speed dual-clutch (DSG) automatic transmission. Yes, VW is allowing us to keep the manual, while other markets around the world won’t. That’s abnormal for America to hear, and we’re thrilled.

Where the Golf R turns from an evolutionary vehicle to a revolutionary one is in its all-wheel-drive system. Bid your not-so-sorry goodbyes to the old Haldex-based, family crossover-spec all-wheel drive, and say hello to the new twin-clutch torque-vectoring rear differential. It’s similar in concept to how the drift-tastic all-wheel-drive system in the Ford Focus RS works. This new differential is capable of proper torque vectoring and can send up to 100% of available rear axle torque to either rear wheel. That means extra torque can be directed toward the outside rear wheel in corners to completely eliminate understeer and improve agility in general. It also enables a new “Drift mode” that allows this front-drive-based hot hatch to do donuts by completely overpowering that outside rear wheel, sending you into a purposeful skid. We tried it, and can confirm the donut mode works. The tire smoke was tasty. 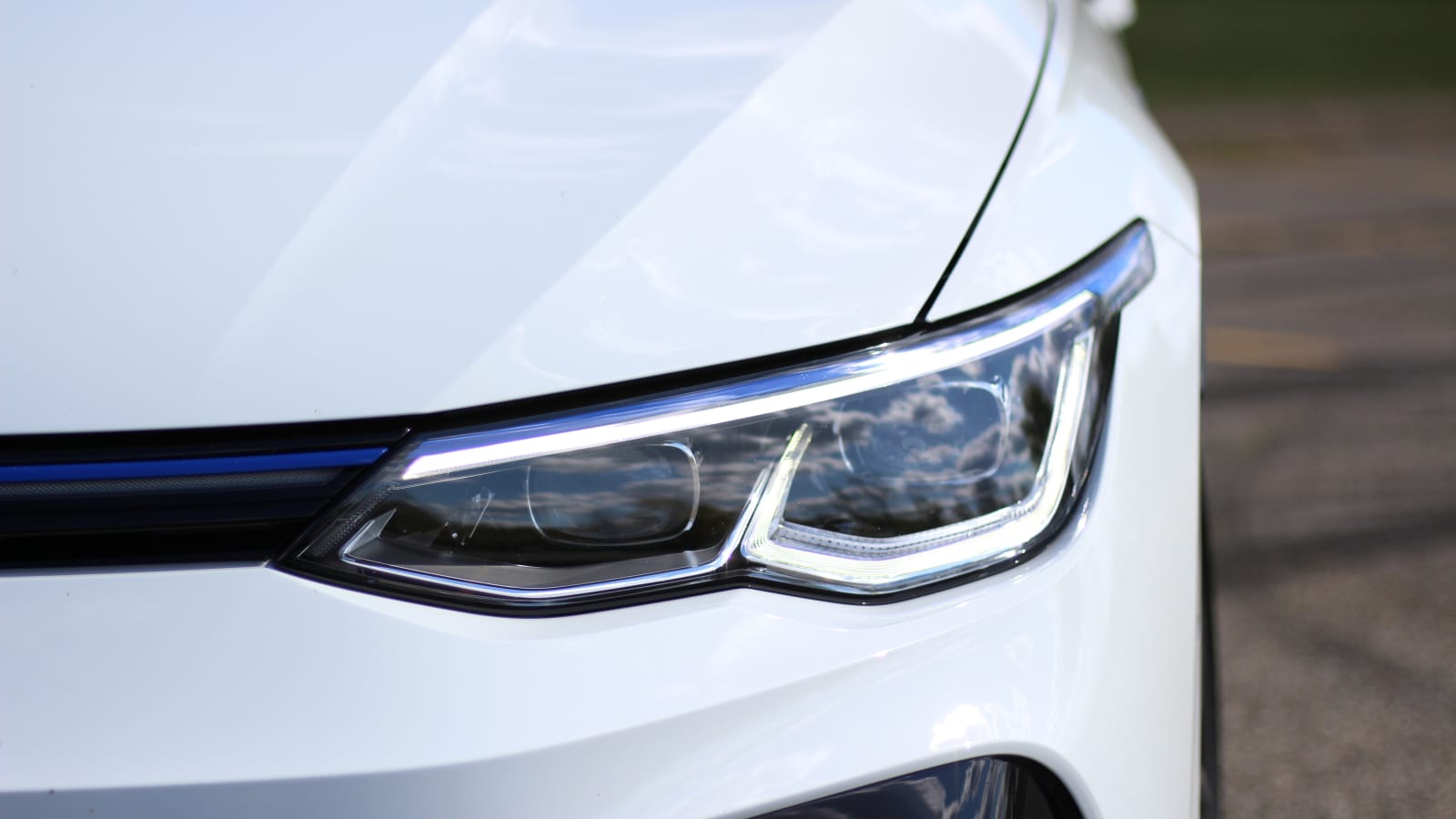 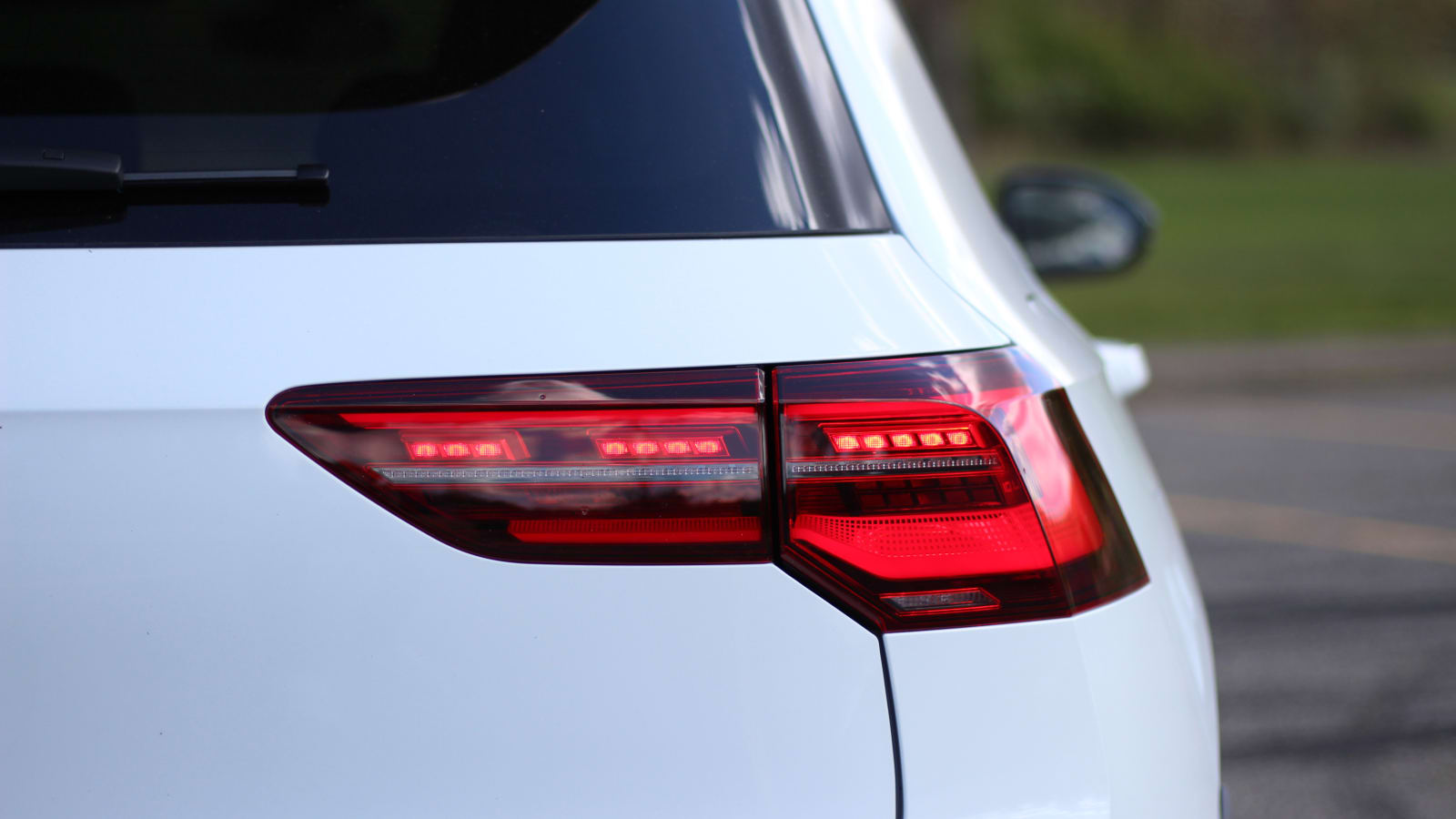 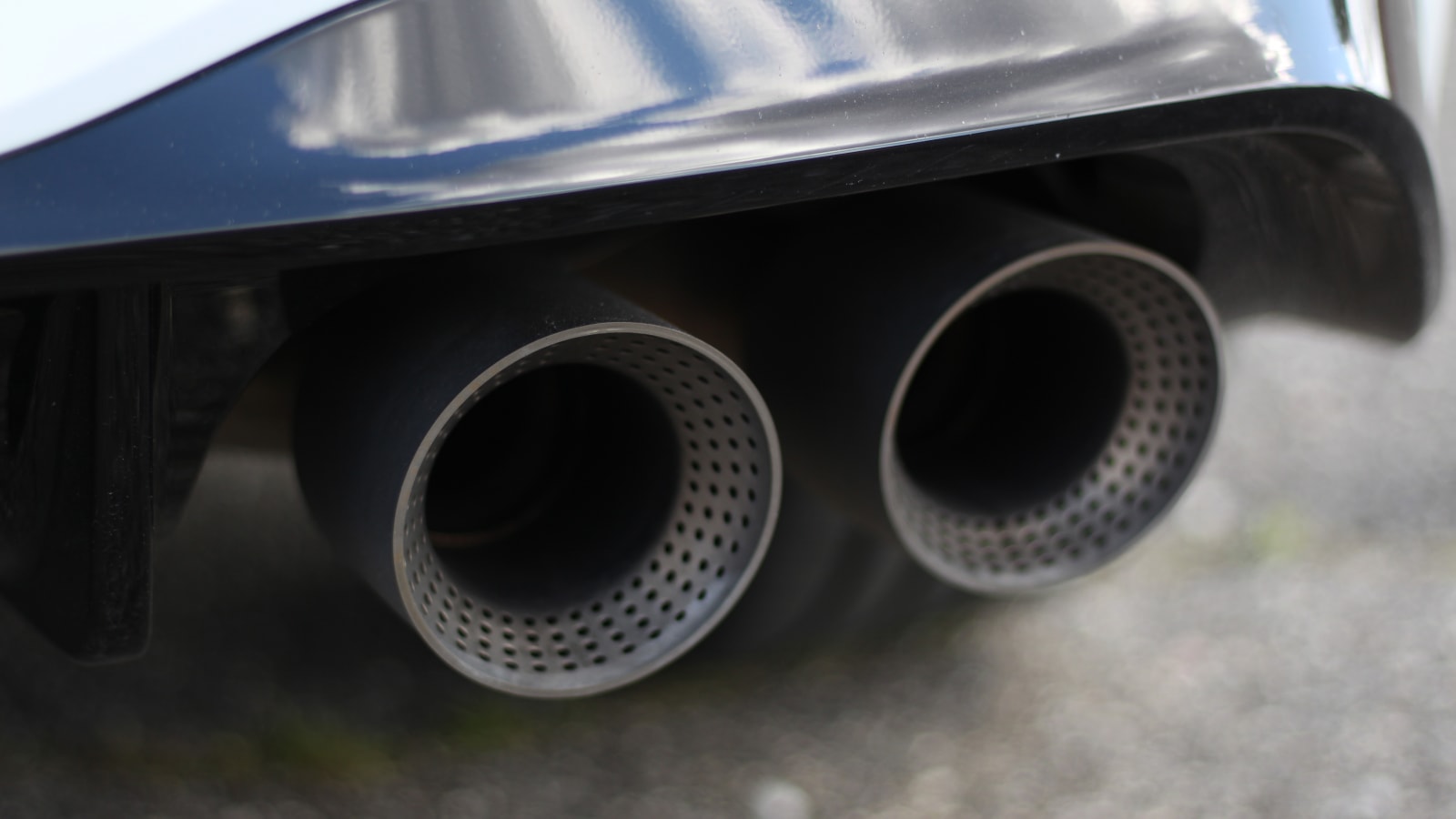 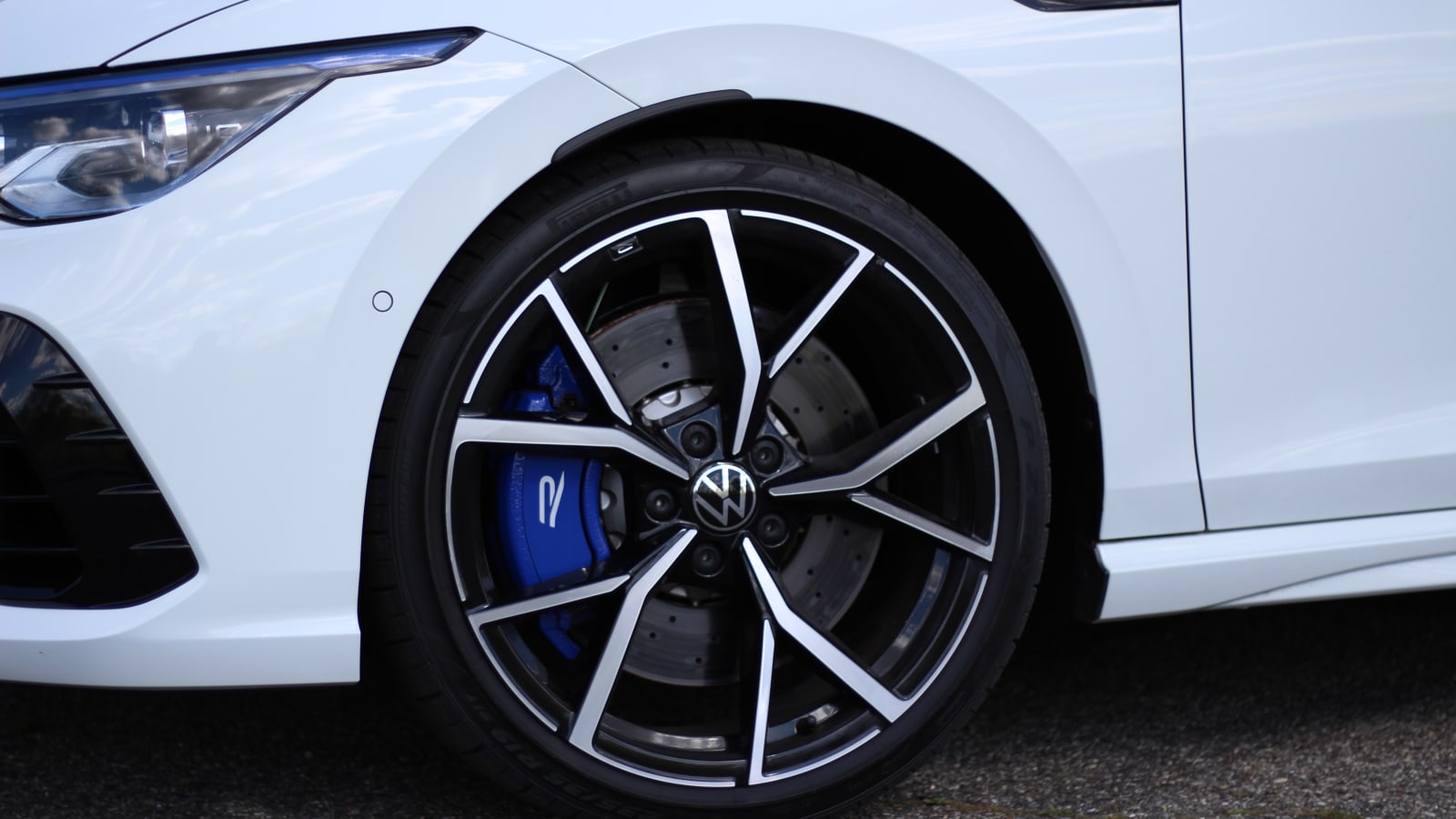 VW totally retuned the Golf R’s suspension for improved handling. Spring rates and anti-roll bar stiffness are up 10%. The DCC adaptive dampers are massaged to fit the car’s newfound stiffness and feature more adjustment than we expected. Pop it into Individual mode, and VW gives you a literal slider to adjust how stiff you want the dampers. There are 15 different settings ranging from mega-soft to racecar-stiff. And while it’s near-impossible to tell the difference when you only move it one slot at a time, there’s an obvious difference in ride quality and body control between larger slider adjustments. Beyond the retuning of components, VW uses a new aluminum subframe in front that saves 6.6 pounds and new transverse mounts and hub carriers on the rear suspension.

The Golf R was no handling slouch before, but all the above makes its body control and rigidity that little bit better through corners. The dampers’ sweet spot for street handling is in between Sport and Race mode. And while that may sound more extreme than usual for the street, VW treats “Sport” mode in the Golf R as what we’d typically call “normal” mode in most cars. The R’s variable-ratio steering rack helps it change direction quickly, and there is very little body roll. It’s agile in the way that a hot hatch is meant to be, feeling light but dead stable when you lean on it. There’s a special “Nurburgring mode” found within a subsection of Race mode that is specifically designed for the ‘Ring, but also works beautifully for enthusiastic backroad driving. It loosens up the suspension to deal with the Nurburgring’s wonky surfaces, but keeps everything else in full-attack, which is perfect for most public roads.

Much of this car’s newfound agility can be traced directly to the rear differential putting in work. The best feel comparison is to the SH-AWD system found in the Acura TLX and RDX. Those are also front-drive-based, but carry rear-wheel-drive handling characteristics and unique power delivery in corners. In the Golf R, you can physically feel a rear wheel powering you through and out of corners. It’s doing much more than just quelling understeer, too, as it maintains the perfect radius that you set with the steering wheel and accelerates through parts of a corner that would require a toe-based balancing act in high-power rear-drive cars. In a way, it’s dummy-proof. You can irresponsibly smash the throttle in the middle of a corner, and the car will simply sort everything out and provide maximum forward momentum in exactly the direction you want to go.

Tail-out action is available if you really ask for it, but it requires ham-fisted steering and throttle applications to get there. Plus, VW makes it as difficult as possible to put the car into its ESC Sport Mode that unlocks all this fun we explained above. There isn’t just a convenient button. Instead, you must dive several layers deep into touchscreen menus where you’ll finally find the options you want. It’s a ridiculous and time-consuming dance compared to a traditional button, especially considering how tight the reigns are when all the systems are on. You’ll only feel a fraction of this car’s true capability if all the nannies activated.

This brilliant drive system is powered by that 315-horse engine that feels more powerful than the numbers suggest. We even mentioned to VW how quick the quoted 4.7-seconds (0-62 mph time) felt, and were surreptitiously told that the official number is conservative. It feels more like a car that hits 60 in 4.1-4.2 seconds when you use its rapid launch control system. The DSG-equipped model we tested snaps through gears just as expected — the new paddles are big, gloriously shaped and way better than anything from Audi. Plus, it’s smart enough to be left in full auto if you don’t want to think about it. We would absolutely have to go for the optional titanium Akrapovic active exhaust system. It offers the best of both worlds by being dead silent in quiet mode, but rowdily loud with the requisite pops and bangs in Race mode.

In that quiet mode, the Golf R’s interior is a relaxing and comfortable space, too. The blue and gray patterned seats are soft and supportive, but also feature massive bolsters to keep you in place. There’s a pile of interior storage options, and most of the basic ergonomics are still done to Golf perfection. We took this hatchback on a long highway haul to go camping, and once again, the hatchback shape proved its worth. Just slap those rear seats down, and the interior becomes a utilitarian cave. All of our gear fit (enough for two people in basic log cabins for three days), and we could still see out the rear window uninhibited. Even a massive 32-ounce Nalgene bottle will fit in the front door pockets — that’s something you don’t even get in most crossovers. 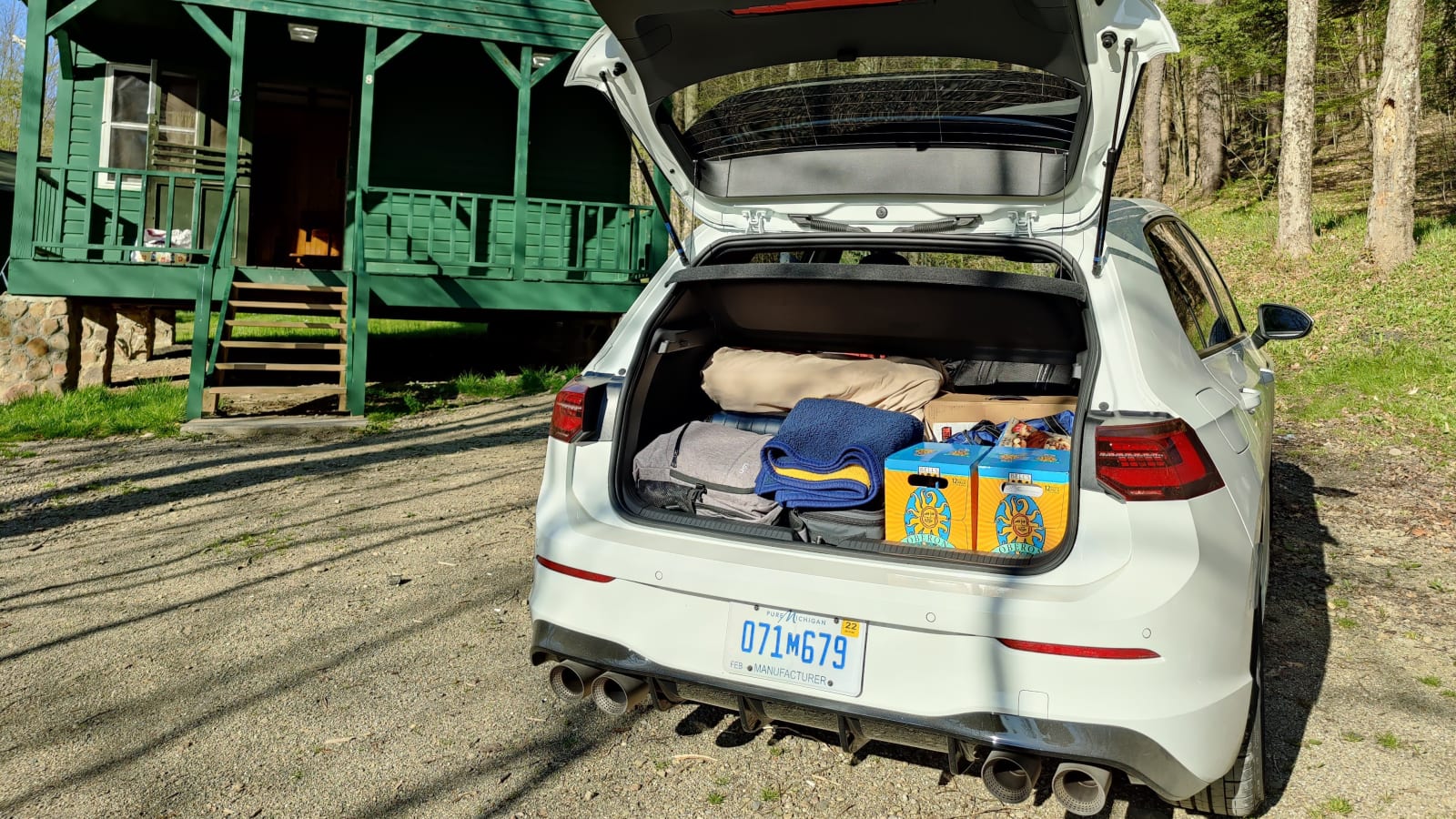 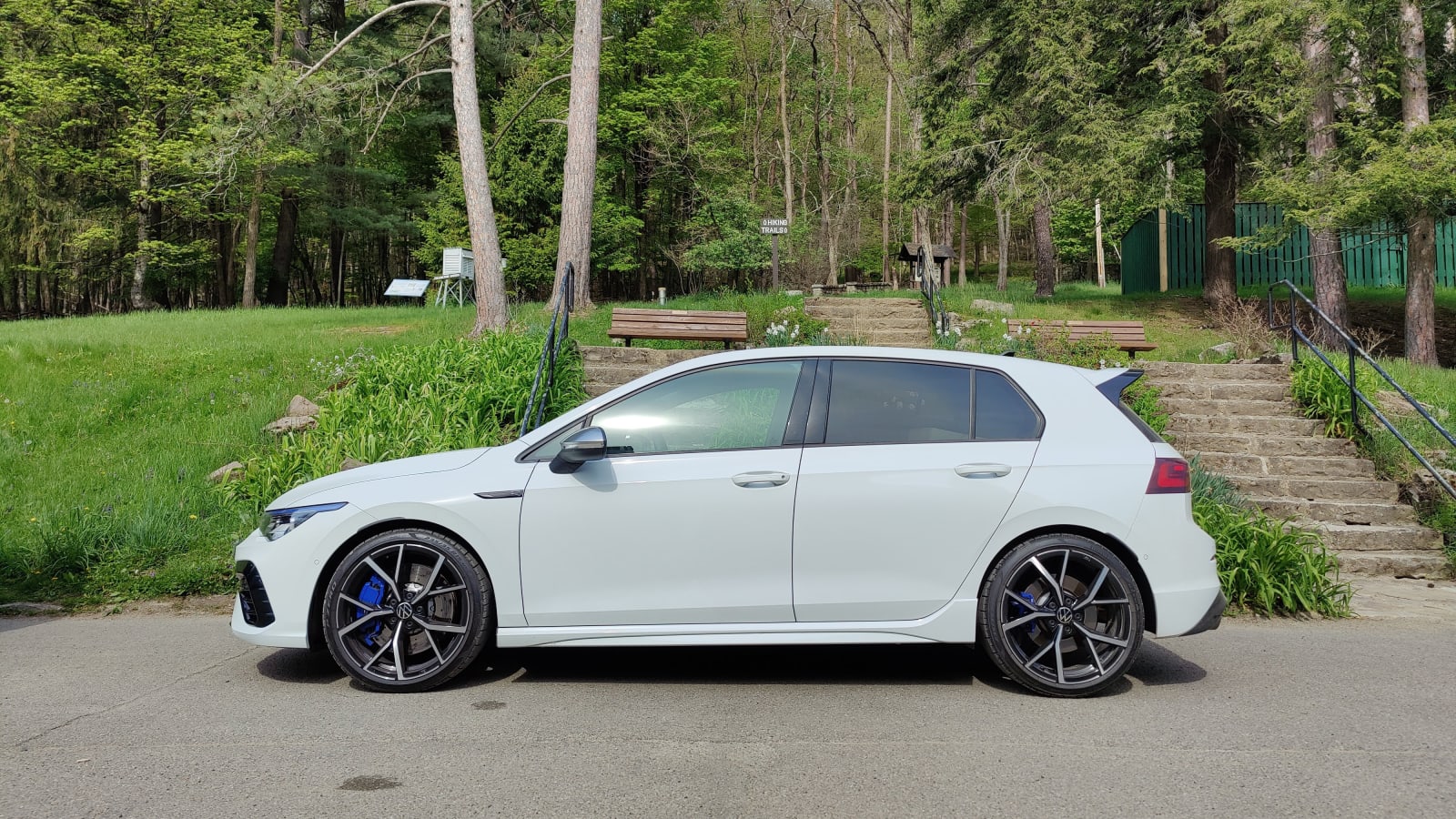 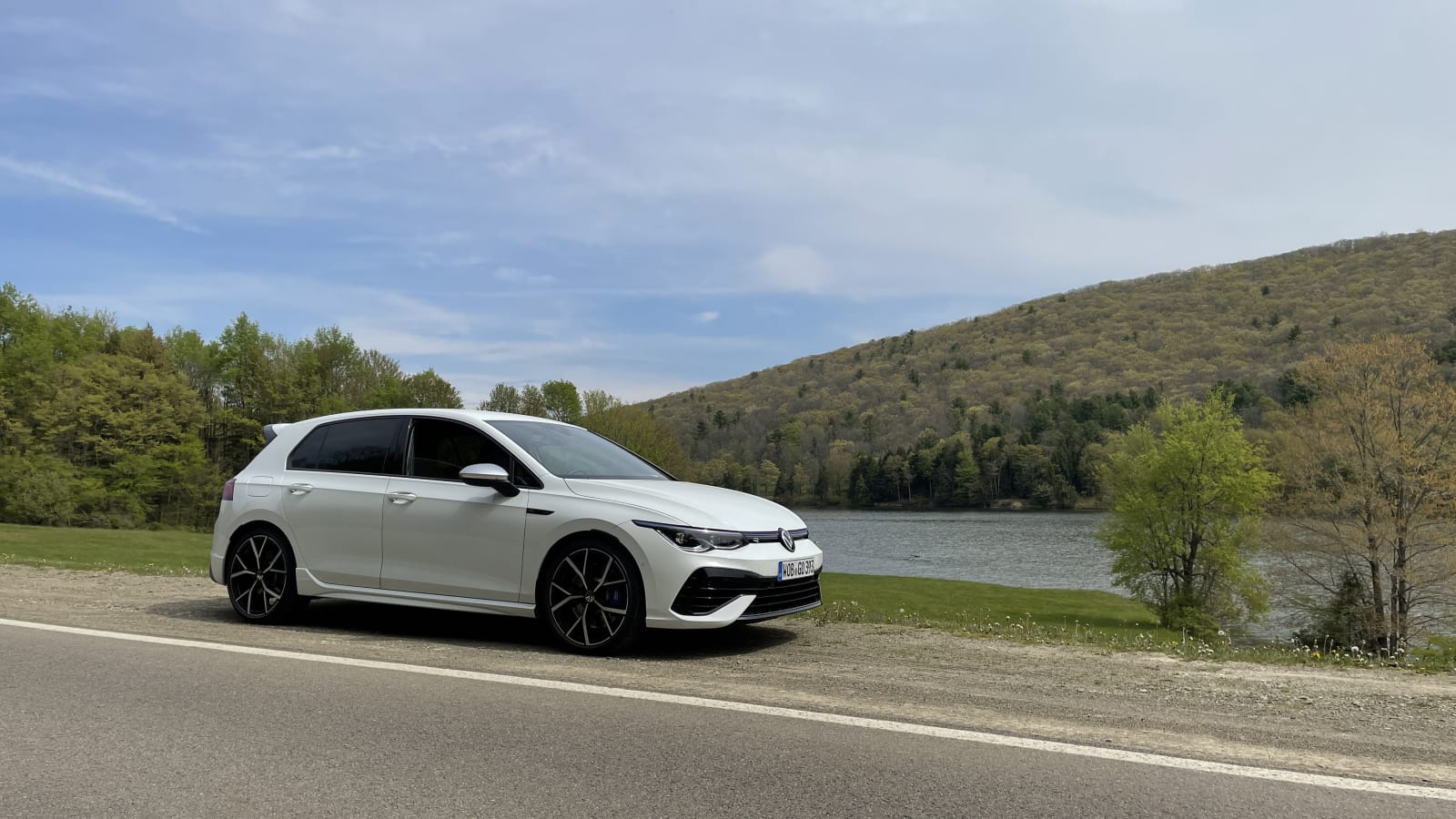 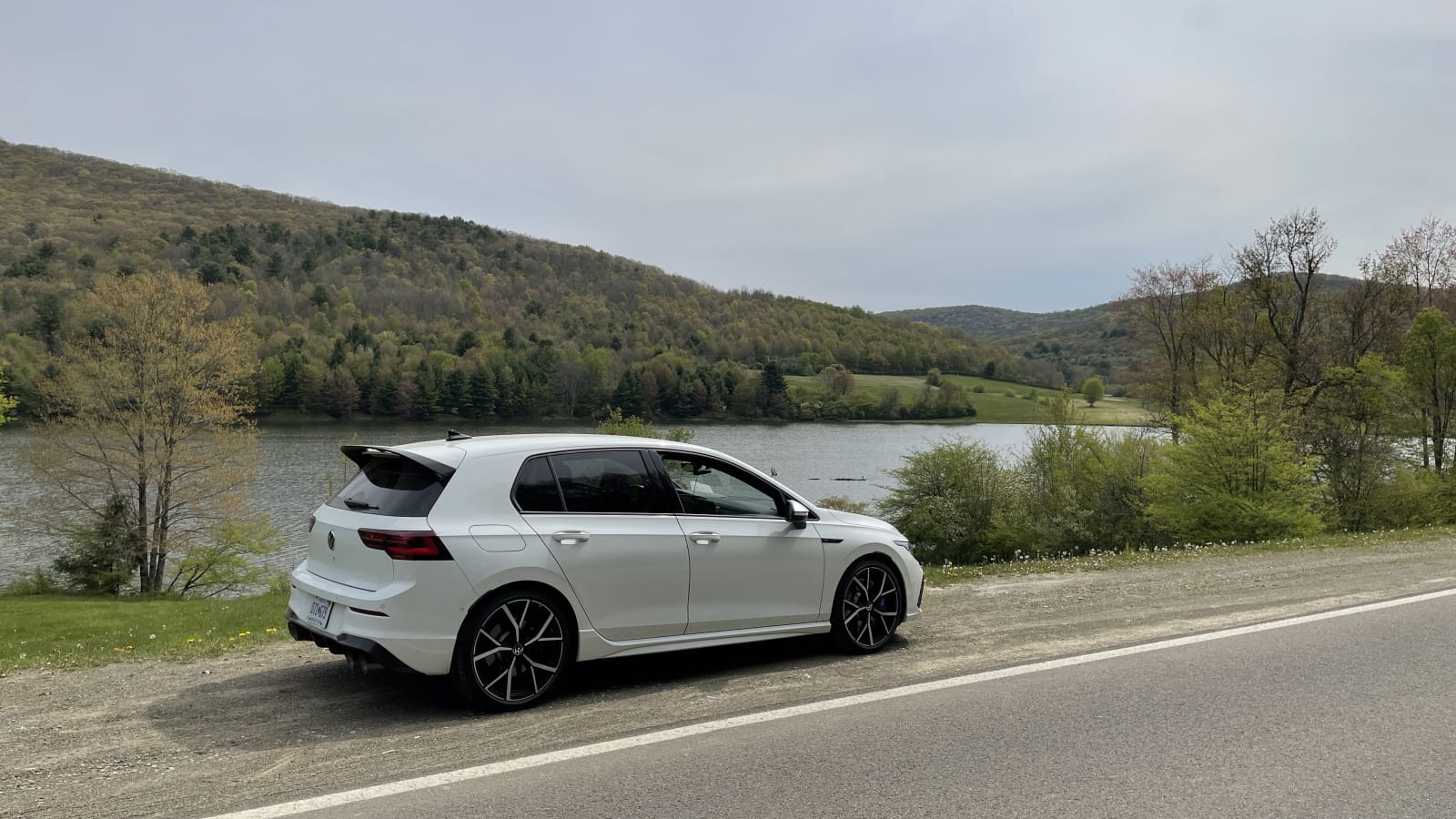 Small quibbles and real complaints did rise from spending elongated periods of time on the road, though. The new climate and radio controls are a mess. VW changed from a center stack dominated by buttons and knobs to entirely touch haptic controls, and the placement of these touch controls wreaks havoc. Both the climate temperature adjustment touch controls and volume slider (there is no knob) are where you might rest your hand to use the touchscreen. We lost track of how many times we accidentally adjusted the climate control or changed the volume while simply using the screen. The infotainment system’s software is much improved in speed and responsiveness (same as the new ID.4’s system), but there’s a learning curve to the new UX if you’re new to it.

Volkswagen could’ve saved itself some trouble by simply integrating most of these frustrating touch controls in a more user-friendly manner, but at least give us a volume knob — many have tried and failed at inventing something better, and VW’s solution is just as bad, if probably worse.

That said, none of our complaints would keep us from putting a Golf R in our driveways. It’s one of the best all-around vehicles in the world at its price, and the design is timeless. The car we tested was a European-spec version, so we don’t know pricing (or many other final specs) yet for the United States, but expect it to come in around the old Golf R’s $40,000 range. The Mk 7 Golf R was a questionable value versus a GTI, but we can safely say the Mk 8 gives great reason to spend the extra dough. We’ll be able to come to a more final conclusion after testing the final U.S. production car, but this first go has us won over.