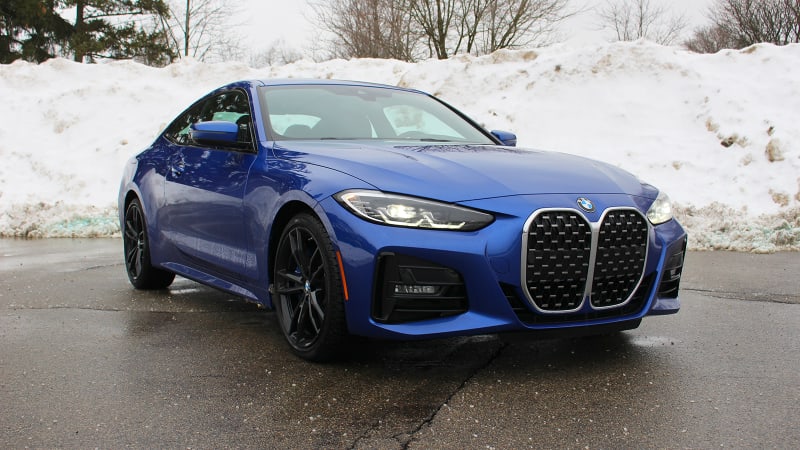 Like Cyrano de Bergerac, it’s impossible to get past the nose of the 2021 BMW 4 Series. Keen to make a bolder, even controversial design statement, BMW has expanded its signature kidney grille to an extent not seen since the early 1950s when tall radiator grilles were still found on virtually every car on Earth. That’s most definitely not the case in 2021, and judging by the uproar by BMW fans and car enthusiasts in general (plus our own guttural reactions to the thing), it hasn’t proven popular. Quite frankly, it’s hard to get past. We could easily see an emergency restyle in two or three years.

However, let’s move beyond that nose for the rest of this 4 Series review and see if this new luxury sport coupe has enough other talents and general panache to overcome its face. Should the metaphor not be clear, just like Cyrano de Bergerac. It’s certainly a sharper, more compelling car to drive than its predecessor – the base 430i in particular is bound to engage more than its few remaining competitors (Mercedes C 300, Audi A5 and Infiniti Q60). It’s also impressively luxurious, with abundant feature content, an impressively refined ride and surprising interior space. Basically, it represents all that a great luxury sport coupe can be … you just have to be OK with that nose.

The 4 Series is completely new for 2021, adapting the current-generation 3 Series architecture that debuted two years ago. Remember, the 4 Series used to be called the 3 Series Coupe and Convertible, and despite the name change (and now a much different face), the connection continues. You can read all about the extensive other updates in our 4 Series first drive review.

The 4 Series Gran Coupe has been discontinued, at least for the time being. 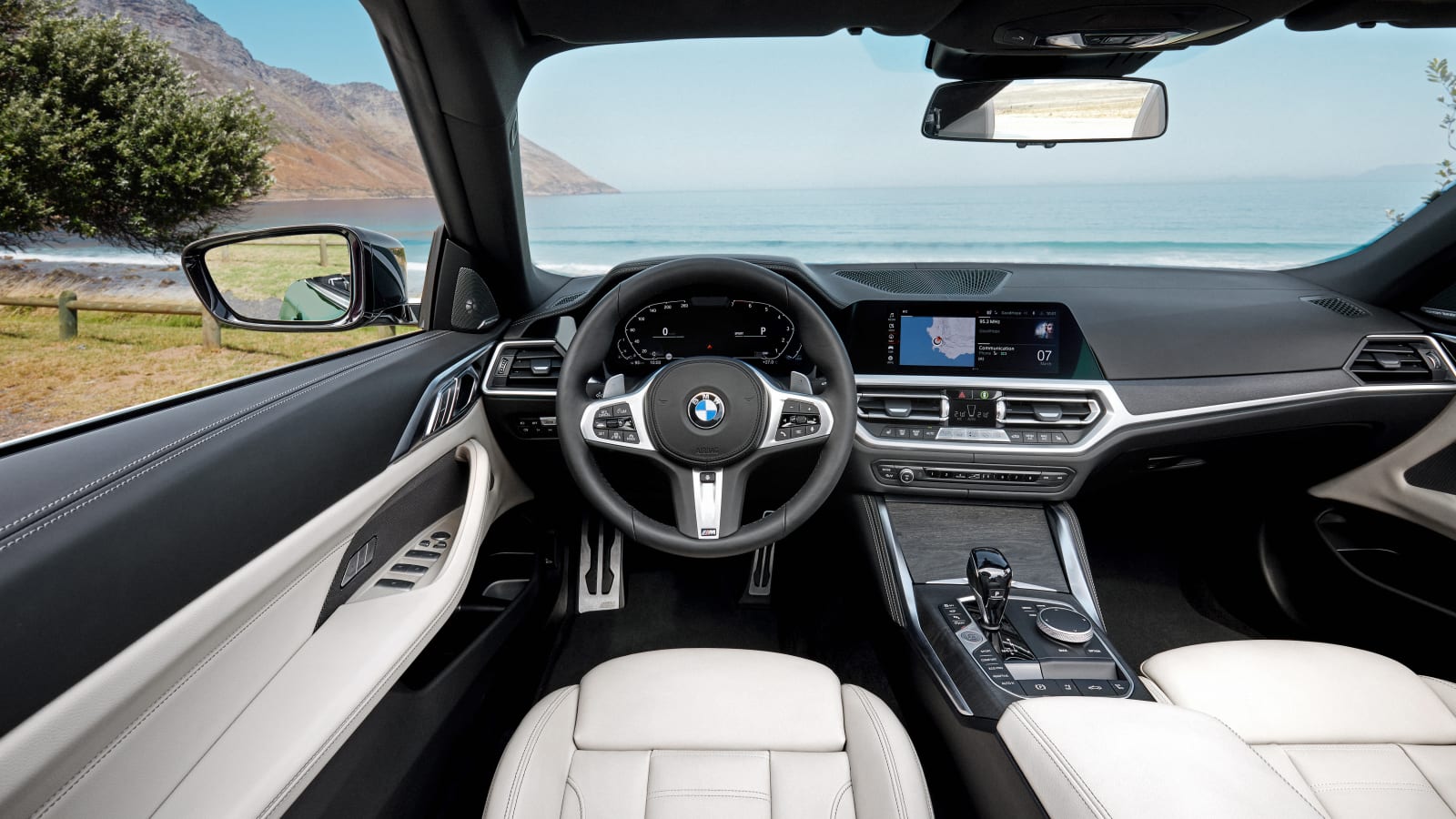 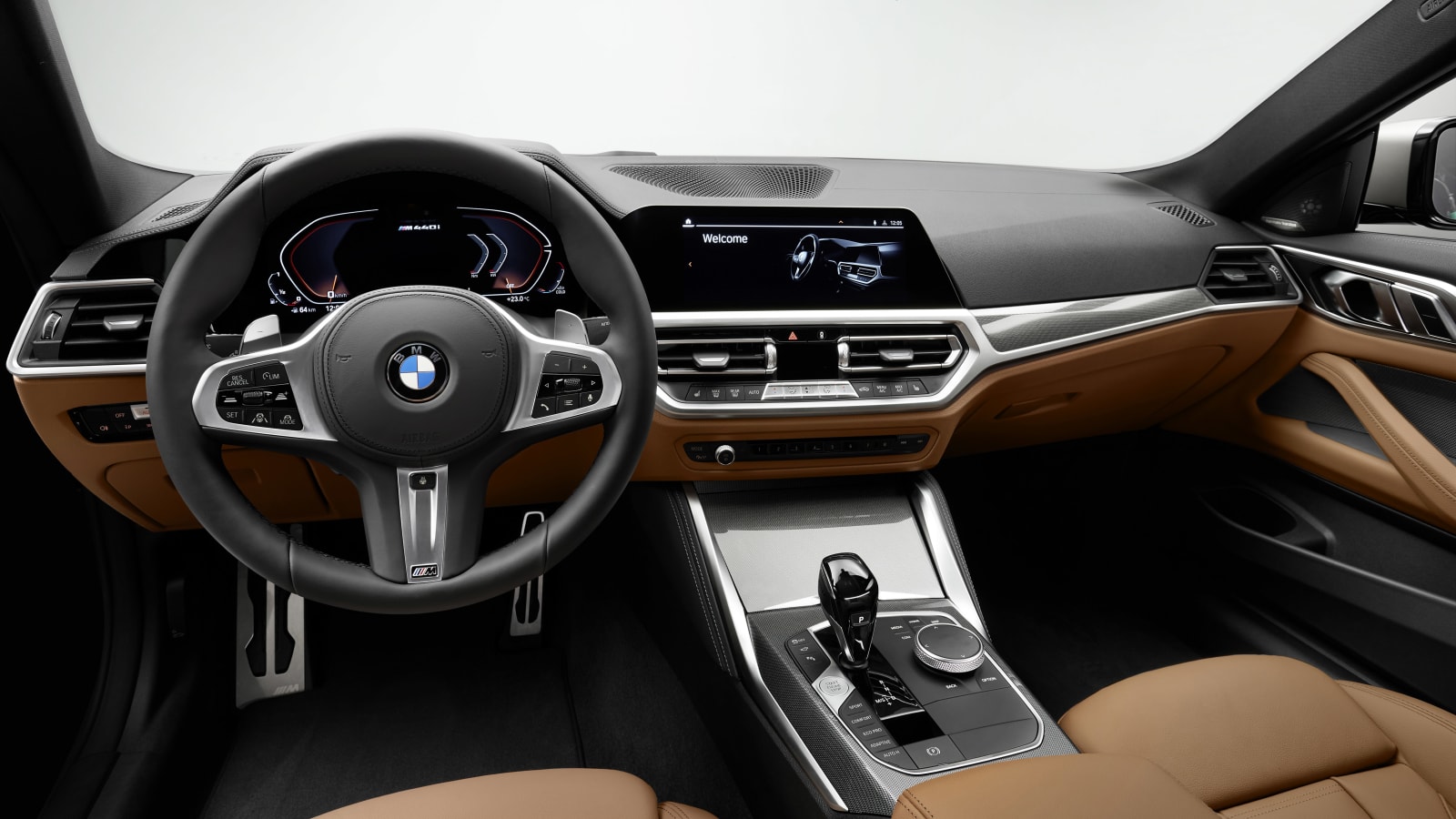 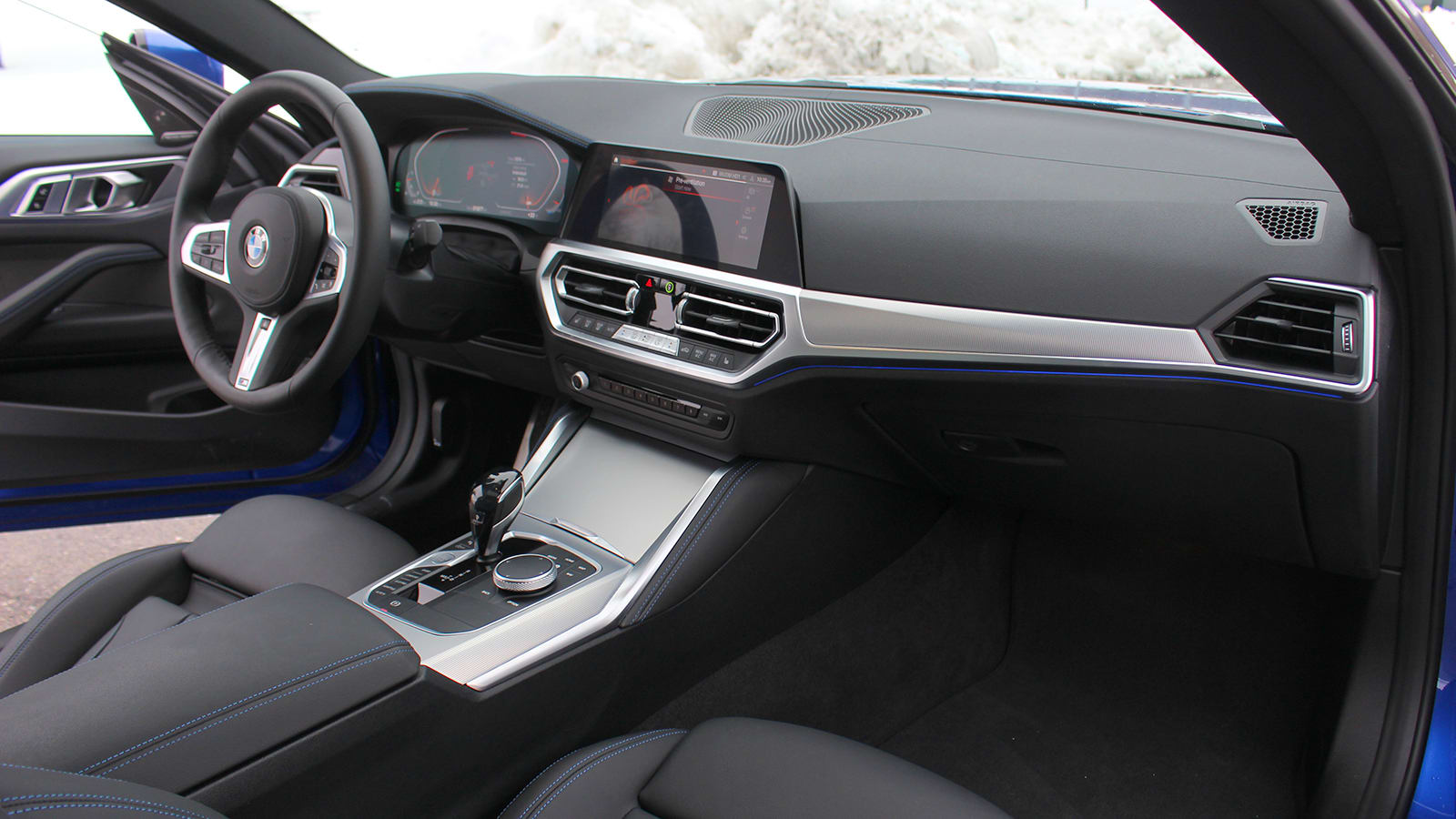 The 4 Series interior design and in-car technology are identical to that of the 3 Series, so forgive us if much of what you’re about to read generously borrows from our 3 Series review. Like that of its four-door sibling, the new 4 Series interior sacrifices some ergonomic functionality in favor of a more eye-catching design with richer materials. Considering that controls are still easily reached and there’s storage aplenty, we think it’s a net positive, even if the design remains more staid than what you’d find in the Mercedes C-Class Coupe. To dig a little deeper, check out our 3 Series Interior Driveway Test as virtually everything we mention in it also applies to the 4 Series.

The 4 Series comes standard with the latest BMW iDrive 7.0 tech interface. We generally like it, especially the myriad ways to accomplish the same tasks – knob, buttons, touchscreen, voice controls. Basically, it allows you to operate the car as you’d prefer. That said, iDrive is still pretty complex, and some may find its menu structure a little overwhelming, especially at first. Android Auto is also added for 2021, and we’re happy to report that we haven’t had the same frustrating connection issues with Apple CarPlay in recent BMW test vehicles. 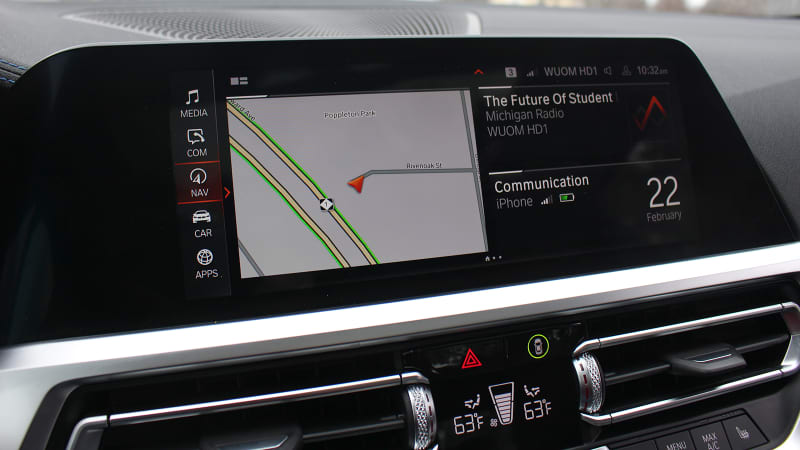 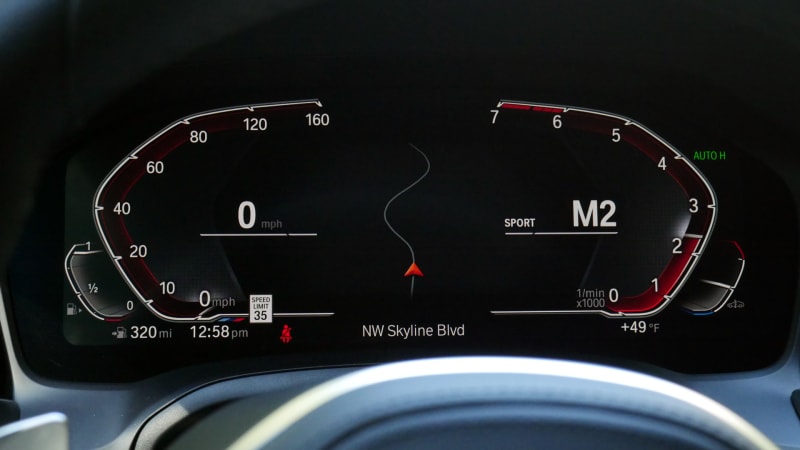 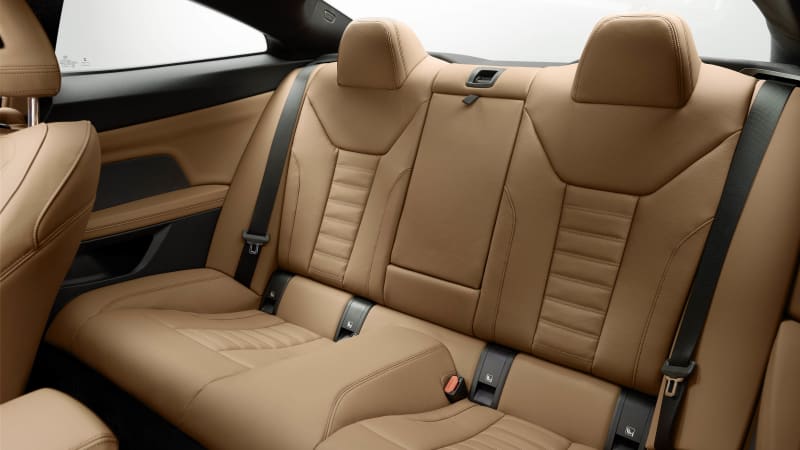 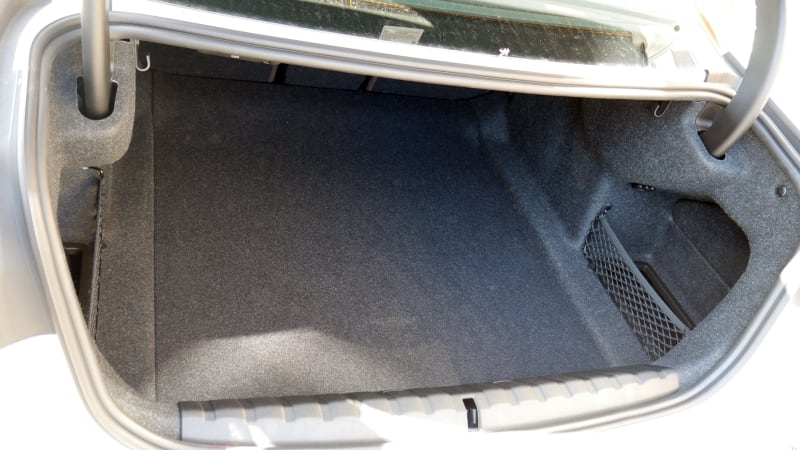 How big is the 4 Series?

This is the biggest 3/4 Series generation ever, growing to proportions that 20 years ago would’ve been in the same ballpark as the 5 Series. While that isn’t great news when it comes to being a lithe, sporting coupe, it does improve the 4 Series’ day-to-day functionality.

The back seat is surprisingly spacious for a coupe. Headroom will be tight for anyone taller than 6 feet, but there’s actually more than enough legroom back there for them. This means that the 4 Series will be even more spacious and less claustrophobic for those of average stature who are realistically bound to end up back there. Getting into the back seat is made tolerable by a power-operated mechanism that, while slow, remembers where the front seat was last placed. The back seat also comes standard with its own auto climate controls and two USB-C ports.

The coupe’s trunk doesn’t seem to lose that much in comparison to the 3 Series sedan (certainly not the 5 cubic-foot difference the specs would suggest). Each passenger should be able to bring along a decent-sized suitcase. The back seat also folds down, and there’s a center pass-through.

We have yet to test the new 4 Series Convertible, so we can’t comment about how much back seat and cargo space it loses relative to the coupe. The specs indicate it loses 2 inches of legroom, though. It’s at least important to note that the convertible roof is a soft top once again, replacing the heavy and complex retractable hardtop of the previous two generations of 3/4 Series Convertible.

What are the 4 Series fuel economy and performance specs?

The 4 Series is only offered as the 430i and M440i, plus the high-performance BMW M4 that we’ll include here for reference but will review separately.

The 430i has a 2.0-liter turbocharged inline-four good for 255 horsepower and 295 pound-feet of torque. An eight-speed automatic is standard – there is no manual transmission available on any 4 Series apart from the M4. This makes us sad. At least rear-wheel drive is standard, but you can add all-wheel drive to the Coupe by opting for the 430i xDrive. BMW’s 0-60-mph estimate is 5.5 seconds for the 430i Coupe and 5.3 with xDrive. The Convertible is 5.9 seconds.

The M440i Coupe is only available with xDrive, while the Convertible is rear-wheel-drive only. Weird. In either case, the engine is a 3.0-liter turbo inline-six that produces 382 hp and 369 lb-ft of torque. Using all four wheels is at least good for a flawless launch as the 0-60 time rests at 4.3 seconds for the Coupe. The M440i Convertible is estimated at 5 seconds flat.

Fuel economy figures were only available for the Coupe at the time of this writing. The 430i returns an exceptional 26 miles per gallon city, 34 mpg highway and 29 mpg combined. Getting xDrive lowers those to 24/33/27. The M440i xDrive Coupe, meanwhile, returns 22/31/25.

As for the new 2021 BMW M4, pictured below, it offers a choice of tunes of a common 3.0-liter twin-turbo inline-six. The standard M4 sends 473 hp and 406 lb-ft of torque to a mandatory combination of rear-wheel drive and a six-speed manual transmission(!). Its 0-60 isn’t that different from the all-wheel-drive M440i at 4.1 seconds, but that’s the unavoidable result of rear-wheel drive producing less traction at launch and humans being slower at shifting than a modern automatic. Oh well.

Now, the other choice is the M4 Competition, which cranks out 503 hp and 479 lb-ft. An eight-speed automatic is mandatory, and although rear-wheel drive is standard, xDrive will become optional starting summer of 2021. The 0-60 drops to 3.8 seconds with rear-wheel drive, and BMW hasn’t published a time with xDrive (it’ll almost certainly be lower).

This is a tricky one. The 2021 4 Series has righted the ship after its rather dynamically disappointing predecessor. The new one is sharper and more involving, with responsive powertrains. The steering is also better than before, imparting more information to the driver’s hands and gaining an increased-yet-uncontrived amount of effort. That said, it’s still numb and artificial in feeling, and certainly doesn’t represent the sort of benchmark status enjoyed by past BMW 3 Series. It’s basically that main element that prevents the 4 Series from being zesty rather than just competent.

At the same time, though, one has to keep in mind how few competitors the 4 Series has left. Is it less fun or engaging to drive than a Mercedes C-Class or Audi A5? Though its German rivals have certainly closed the gap, neither has established a clear lead, either. Meanwhile, fun-to-drive alternatives like the Alfa Romeo Giulia and Genesis G70 aren’t offered as coupes. If there is an outside-the-box suggestion to be made, it would be the Ford Mustang and Chevrolet Camaro. They’re coupes, they’re fun to drive and surprisingly refined with the right boxes checked.

We have yet to test the BMW 4 Series Convertible, and will update this review when we do.

What other BMW 4 Series reviews can I read?

2021 BMW M440i First Drive Review | A chassis for enthusiasts; a face for its mom

Our first drive of the new 4 Series came in an M440i coupe. We were impressed by its performance and chassis, and although a bit underwhelmed by its cabin design found it to have a worthwhile uptick in luxury.

The base model 430i doesn’t really wow us. It’s not a bad drive, but it also leaves too much on the table for those expecting a true sport coupe. 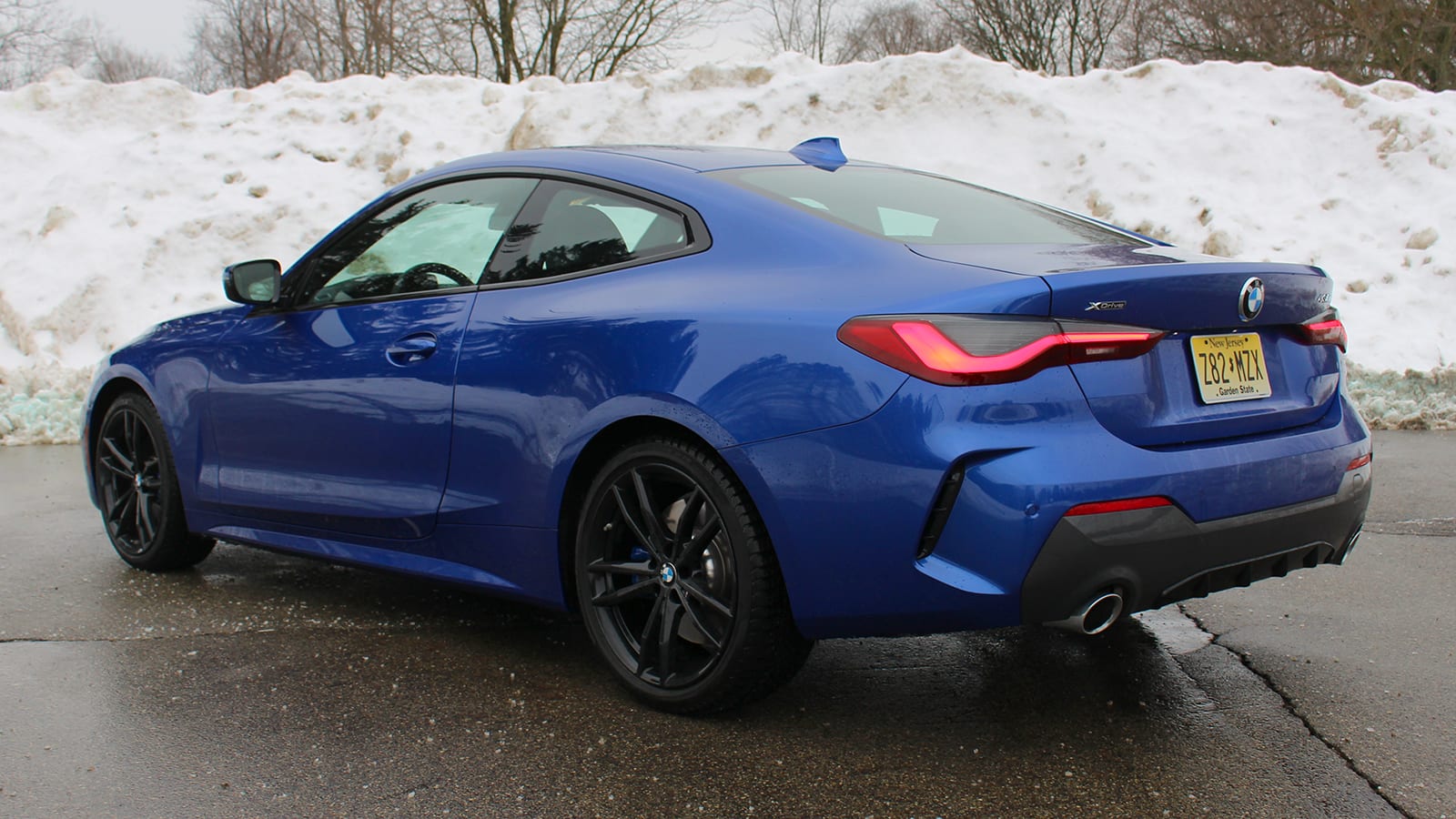 Everything we know at this point about the new drop top, which indeed reverts back to a cloth roof after two generations with a retractable hardtop. We can’t say the grille is any more appealing when the roof behind it is cloth, but we’re certainly fans of that green paint. 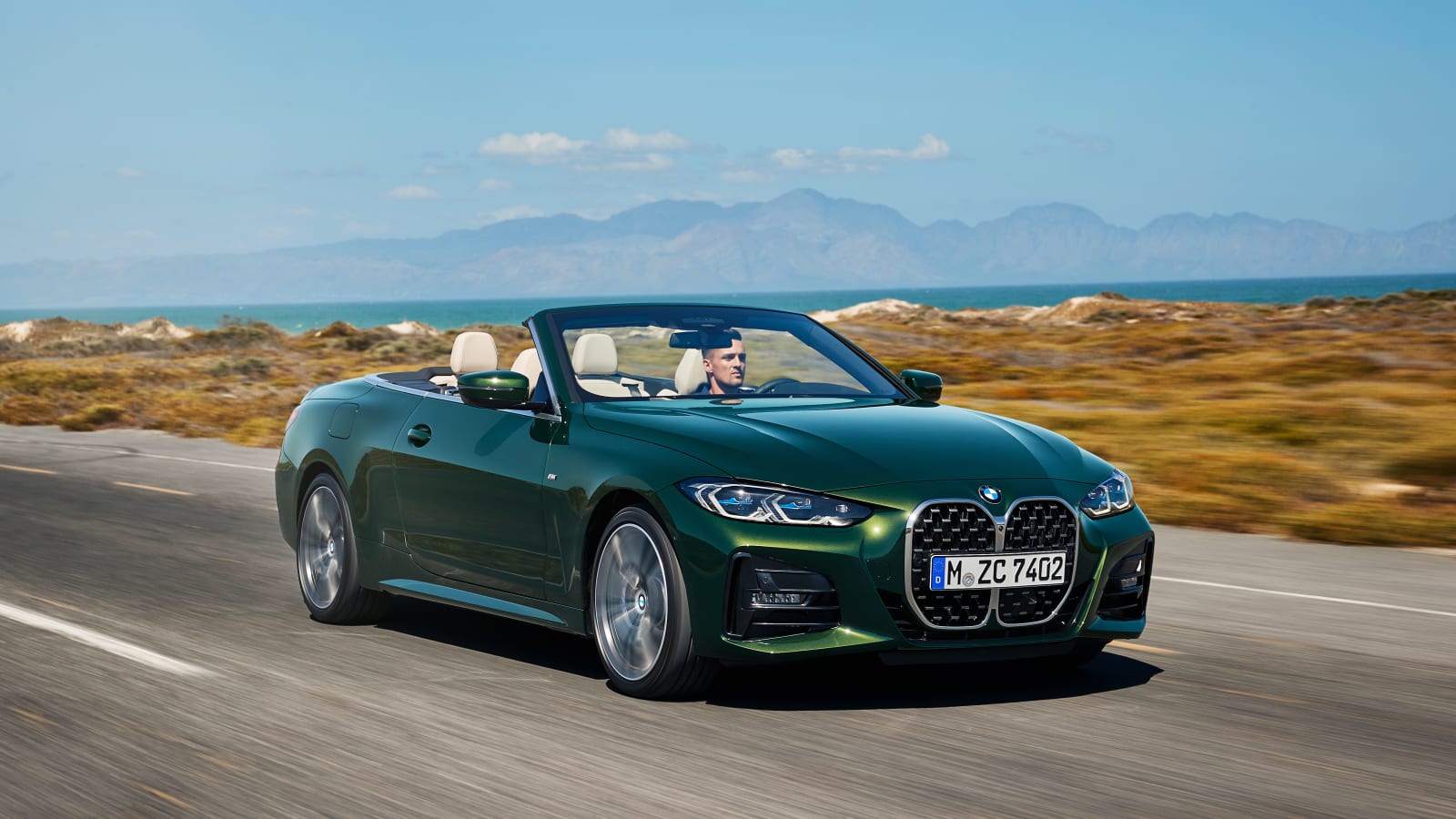 What is the BMW 4 Series price, and what features are available?

Besides its bigger engine, the M440i features a variety of chassis improvements from BMW’s M Division (though not to the extent of the M4). Otherwise, it comes with the same ample amount of standard features.

There are then a multitude of options, available within packages and/or stand-alone items. You can find a full breakdown of features, specs and local pricing for the 430i here on Autoblog and for the M440i here.

All prices below include BMW’s reasonable $995 destination charge.

What are the 4 Series safety ratings and driver assistance features?

The 4 Series had not been crash tested at the time of this writing. Even the IIHS crash barrier was afraid of that face. Sorry, couldn’t resist.