There’s a new Pagani on the block. It’s called the Huayra R, and it’s a track-only version of the regular Huayra. However, leaving it at that wouldn’t do the Huayra R justice, because it’s so much more than just a hotted up Huayra.

The big news is the new and bespoke, naturally aspirated 6.0-liter V12 engine sitting behind the cockpit, a significant departure from the twin-turbo variant used in road-legal Huayras. The new engine was put together by Mercedes-AMG’s racing subsidiary, HWA. The Huayra R makes a furious 850 horsepower and 553 pound-feet of torque. Redline is a scorching 9,000 rpm. Since it didn’t need to follow any road emissions regulations, the engine could be pushed to much higher limits. The Inconel exhaust has removable mufflers for when you want to be extra loud, but can be put in place for use at race tracks with noise restrictions. Unfortunately, Pagani doesn’t quote any specific acceleration figures for the Huayra R.

All shifting is handled by a new six-speed sequential gearbox made with HWA. It’s designed to be extremely light, and in combination with the engine, acts as a structural part of the car. 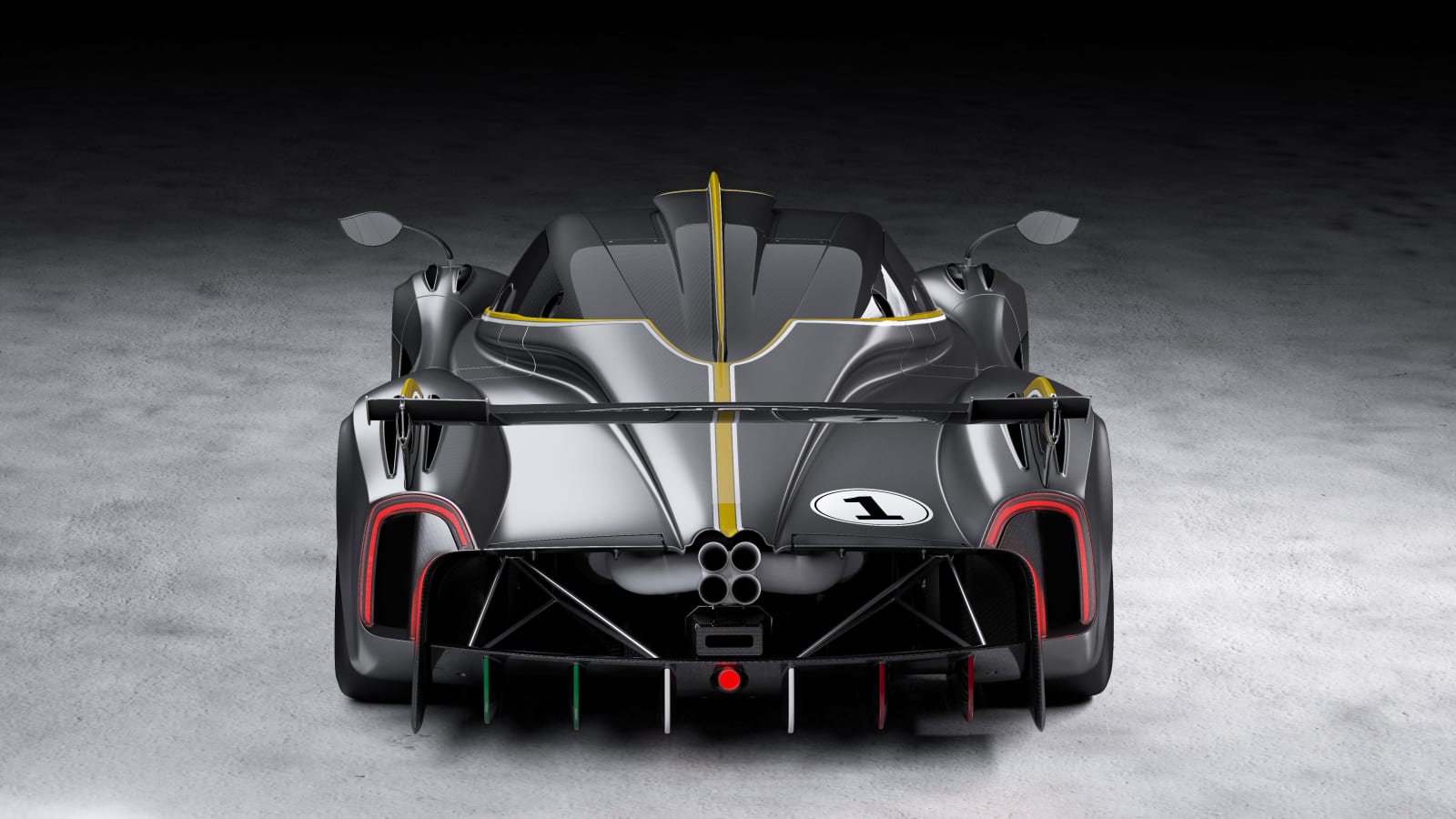 The Huayra R’s chassis is modified from the standard Huayra with new and lighter materials. These efforts, along with additional elements such as a roll bar and chassis-mounted seats, make it both stiffer and significantly lighter than a regular Huayra. Its dry weight is only 2,314 pounds, which is hundreds of pounds lighter than the road car.

Pagani says the suspension is made of forged aluminum alloy and uses helical springs and electronically controlled active dampers — the dampers are designed to constantly adjust to the road conditions on a racetrack. That means that instead of adapting for potholes and frost heaves, it sets the car up for perfect balance under uneven braking zones and predictable behavior through and out of corners. The brakes are the best Brembo has to offer. Pagani uses the Italian company’s latest carbon ceramic self-ventilated discs and racing compound pads. Slick racing tires (wet tires are available) wrap around custom-made 19-inch forged aluminum alloy wheels.

Aerodynamics and design were two huge focuses for Pagani with this car, as the team wanted it to be both beautiful and hugely capable on the track. The final design leaves no question as to its race car status with the gigantic aero elements found throughout. Everything combined results in 2,204 pounds of downforce at 199 mph.

There isn’t much to talk about on the inside, but you get the full array of racing features you’d expect in such a car. Most of your essential controls are found on the quick-release steering wheel, and other controls are on the center console. A high-resolution display as an instrument cluster will feed you all necessary vehicle data while on the track, and it has a telemetry system so a pit crew can monitor and analyze driver performance. Pagani is already promising “Arte In Pista” days for Huayra R owners to have dedicated track days with the assistance of the Pagani team and professional drivers. These will happen all over the globe in North America, Europe, Asia and the Middle East.

You’ll need to be part of a very exclusive club of millionaires and billionaires to enjoy the Huayra R, though. Only 30 will be built, and each has a base price of €2.6 million before taxes. At today’s exchange rates, that’s about $3.1 million. Happy shopping.