Aston Martin has teased a new sports car from its official Twitter account. The image shows the car’s silhouette with a big green and lime swoosh above it. The car appears to be a Vantage variant, with the addition of a rear spoiler and Y-spoke wheels. It’s also finished in the same Aston Martin Racing Green as its 2021 Formula One race car livery.

The spoiler and colors evoke the new Vantage safety car that made its debut over the weekend at the pre-season test in Bahrain. That car features an AMRG paint job with a Lime Essence pinstripe along the front air splitter, side skirts, and rear diffuser. It’s also equipped with a rear wing not found on standard Vantages. Like the car in the shadowy teaser, it also wore the optional vaned grille as opposed to the standard mesh. Could Aston Martin be taking a page from the General Motors playbook and making a pace car edition Vantage? 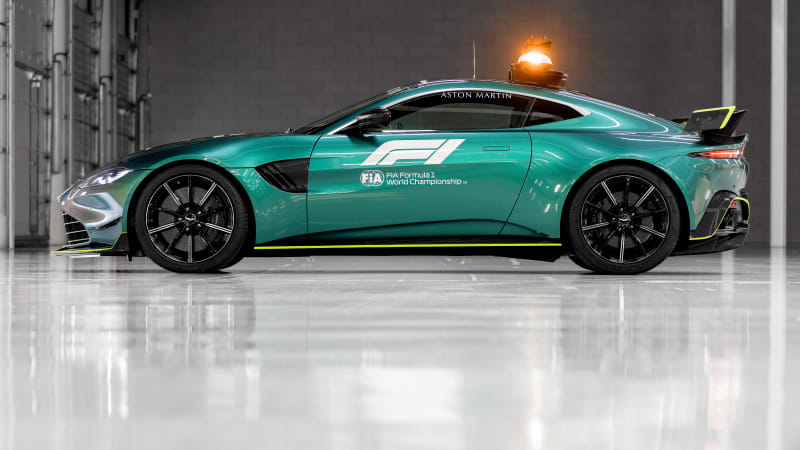 That would be uncharacteristic of the British marque, so perhaps a new Vantage AMR is more likely. The previous AMR was limited to 200 units and, despite having the same power as regular Vantages, made waves for letting you row your own gears with a seven-speed manual. Since then the stick shift has been made standard for the Vantage, but the AMR boasted many other features that set it apart — carbon ceramic brakes, carbon fiber trim, forged wheels, a mechanical limited-slip differential, and 200 fewer pounds of curb weight.

On the other hand, the F1 pace car’s menu of modifications seems like it could easily form the basis for a new AMR. The Vantage safety car increased output of its 4.0-liter twin-turbo V8 by 25 horsepower to 528. The peak torque of 505 lb-ft was unchanged, but Aston Martin claims it could be sustained for longer. Additionally, the transmission was strengthened, the chassis stiffened with underbody bracing, and modifications were made to suspension, steering and dampers. It’s not clear whether the pace car’s bespoke splitter is on the teaser car.

Aston Martin gave no information to accompany the teaser, so we’ll just have to wait until March 22, when the car is scheduled for a full reveal.