Win the most beautiful Jaguar ever made, a 1963 E-Type

What to bring off-roading: Packing a non-winch basic recovery kit

Audi's EV expansion will steer it into new segments, out of old ones

Honda shows off interior design concept, and there's something to it

The 2023 Cadillac Lyriq is the latest electric luxury crossover to enter a quickly growing segment. It brings with it the company’s trademark creased design language along with high-tech features and an impressive amount of range. The Cadillac also happens to have a price and specifications that put it square in the middle of a competitive group, so we had to line up the numbers to see how it compares. We’ve gathered up a selection of premium electric crossovers including the Tesla Model Y, Audi E-Tron and Jaguar I-Pace, all of which seem like the closest rivals for the Cadillac.

We’ve assembled all the raw numbers in the chart below. We’ve also got some additional analysis below that. And now, onto the data. 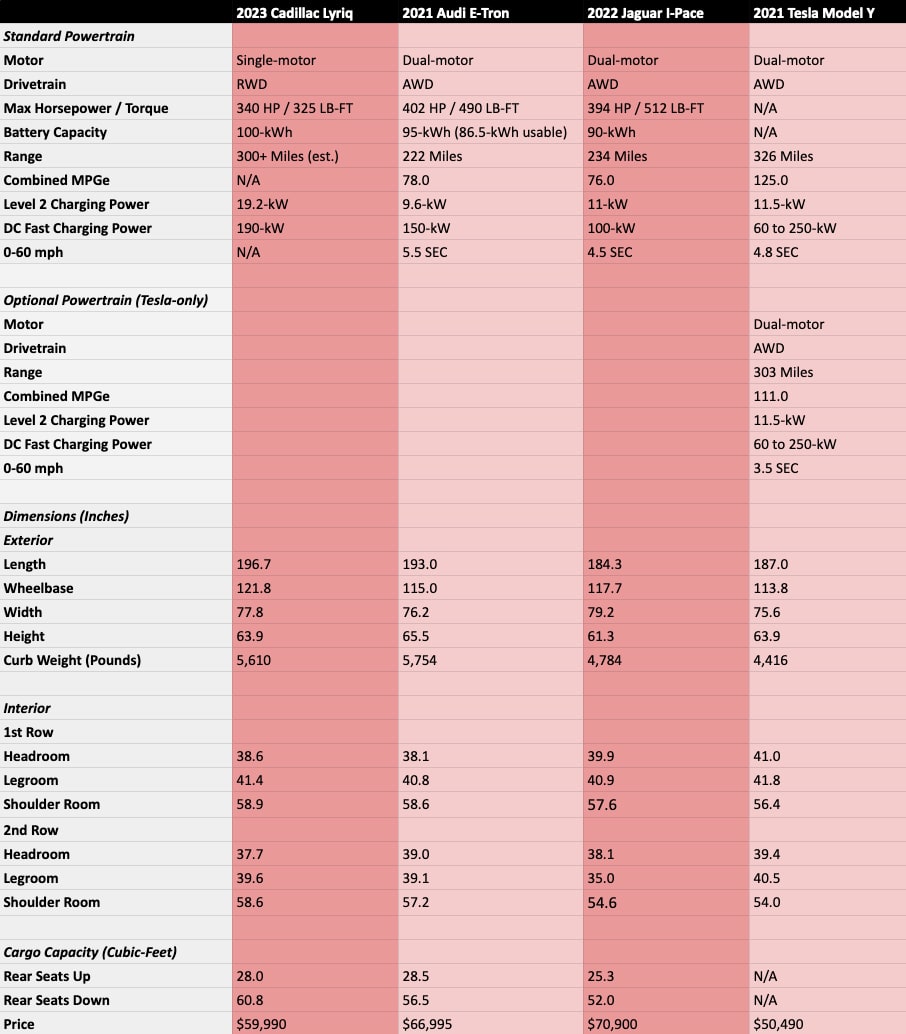 Interestingly, the Cadillac is the least powerful of the bunch. This is a bit surprising considering that GM will have a 1,000-horsepower electric Hummer pickup coming out soon. But in the Lyriq, Cadillac only uses a single electric motor powering the rear wheels. While its 340 horsepower and 325 pound-feet of torque should be more than adequate, it falls short of all the dual-motor, all-wheel-drive competition.

Because Tesla does not provide horsepower or torque numbers, we’re not sure how much the base model makes. We assume it’s close. The true power fiends will likely want the optionally available Model Y Performance, though. It also doesn’t have publicized power numbers, but its 0-60 mph time of 3.5 seconds suggests its substantially more powerful than the other crossovers, here.

Power is all well and good, but range is arguably more important for an electric car. The Tesla is on top, here. The base Long Range trim has an estimated range of 326 miles. The company doesn’t specifically say how large the battery is for it or the Performance, which goes 303 miles. The Cadillac is close behind with a current estimate of more than 300 miles on its 100-kWh battery. Cadillac doesn’t say whether that number is the gross amount or the usable amount. The Audi and Jaguar lag behind with less than 250 miles from their 95- and 90-kWh batteries, respectively. Audi is the only company that notes that the usable capacity is less than the total, which is a common strategy employed to extend the life of the battery and to maintain consistent ranges over time.

While not as broadly discussed as range, we also wanted to touch on efficiency. Even though electric cars don’t use gas, they still use energy, and they aren’t equally efficient at using it. The Tesla is far more efficient, which could certainly explain its superior range. The Long Range has an EPA rating of 125 mpg-e, and the Performance comes in at 111 mpg-e. The Audi follows at 78, and the Jaguar is just barely behind at 76. The Cadillac doesn’t have a rating, yet.

Finally, when it comes to charging, the Tesla offers the fastest available charging through its supercharger stations. The Cadillac comes up second followed by the Audi and then the Jaguar. But when you’re charging at a Level 2 charger, the Cadillac can charge the fastest with its 19.5-kWh on-board charger. It does require your Level 2 home charging station to support that. If the charger isn’t capable of that, the Cadillac will charge at 11.5-kW, similar to the Tesla and the Jaguar. Also, while the faster Level 2 system is included on the first run of Cadillacs, it will be an option on later, likely lower trim variants.

Among this set, the Cadillac is unquestionably the largest vehicle. It’s about a foot longer than the shortest car, the Jaguar, and its wheelbase is 8 inches longer than the Tesla, which has the shortest wheelbase. Its height and width are about in the middle. The 5,610-pound Cadillac is nearly the heaviest, but Audi’s shockingly heavy E-Tron still takes the title belt at 5,754 pounds.

Despite its short wheelbase, the Model Y offers the most headroom and legroom in the group, though the Cadillac are quite close in legroom, and both offer more shoulder room. The Jaguar is also close on front seat space, but the rear seat is a bit tight compared to the others. The Tesla also boasts the only optional third-row of seats, but they only seem to be usable by the smallest of children.

The Cadillac makes use of its large size in terms of cargo space, where it tops the Audi and Jaguar. Tesla doesn’t publish how much space is behind the raised second-row, nor does it specify whether its cargo space measurement of 68 cubic feet includes the front trunk. The other companies clearly state that they separate frunk and cargo area measurements.

The Americans lead the way on price. The Model Y Long Range is the most affordable at just over $50,000, followed by the Performance trim at around $57,000. The Cadillac comes in at just under $60,000 followed by the nearly $67,000 Audi and the nearly $71,000 Jaguar. The Audi and Jaguar still qualify for a $7,500 federal tax credit, though. GM and Tesla have sold enough electric cars they no longer get the credit. As such, the base E-Tron is nearly dead even with the Cadillac. The Jaguar will still be the most expensive.

It’s important to note, however, that a vehicle’s price (and total value) isn’t simply determined by its dimensions and powertrain specs. There’s the matter of feature content, interior design, build quality and what it’s like to drive. That’s something a spreadsheet obviously can’t tell you.