The name and the badge are what everyone wants to talk about. I mean that literally, as every person who stopped me to talk about this Iconic Silver 2021 Ford Mustang Mach-E Premium AWD (and there were many) zeroed in on that mid-gallop horse and had some question or opinion about it. It wasn’t all negative, either. Far from it. Ultimately, though, they’d want to know what it was like. The answer was simple: It’s exceptional.

Of course, the Mach-E is hardly a simple thing. There’s a dizzying array of drivetrain and battery combinations available, resulting in numerous ranges, power outputs and acceleration times. In general, opting for all-wheel drive brings more power and torque, but less range. The Extended Range battery (88 kWh of usable battery capacity versus 68 kWh) adds range as you might suspect, but also increases horsepower. That battery’s availability also differs by trim level: unavailable on the base Select, optional on the Premium and standard on the California Route 1 and First Edition models. The high-performance Mach-E GT adds further range and higher outputs, but it’s still months away.

For now, the configuration we tested is the most powerful version available: the Premium AWD with the Extended Range battery that produces 346 horsepower and 428 pound-feet of torque. Ford says it’ll hit 60 mph in 4.8 seconds. It feels exactly that quick. All that instantaneous torque embeds your body firmly into the soft front seats as it gets the Mach-E up to speed with ease, but as the numbers in the very-Mustang “Ground Speed” indicator rise, it runs out of steam in a way indicative of a car whose horsepower number is so much smaller than its torque figure. Accelerating once at highway speeds is a treat – just toe the accelerator and the Mach-E shoots forward without gears to change or an engine to roar.

It isn’t silent, however. Ford adds artificial noise that seems to emanate from roughly where you’d expect an exhaust would be. It’s a deep rumbly sound, but it’s not excessive nor a contrived copy of a V8’s. In the Mach-E’s normal driving mode, or “Engage” as it’s officially known, the noise is only heard when you gun the motor. In the sport driving mode, or “Unbridled” as it’s ridiculously known, it’s more omnipresent. Basically, the Mach-E makes go-fast noises when you expect a car to make go-fast noises. It adds to the experience. I like it. If you don’t, turn it off. 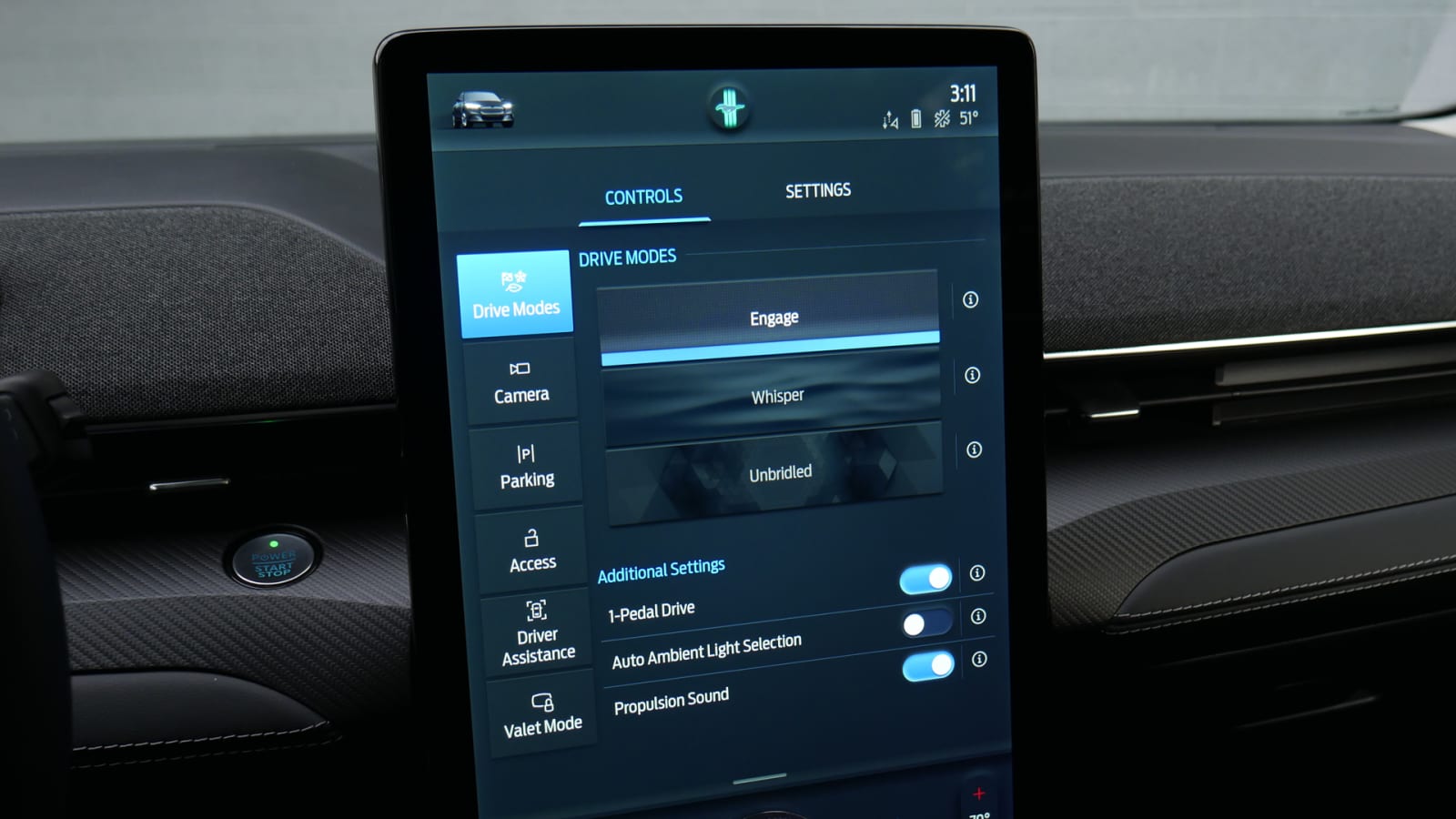 As in many other electric cars, but not all, the Mach-E offers drivers the choice of one-pedal driving. Easily accessed with a press of a button in a touchscreen menu, it is one of the most aggressive regenerative braking applications I’ve experienced. It’s also one of the best. Not only will the Mach-E come to a stop simply by easing off the throttle, it utilizes the Auto Hold function to stay stopped until you toe the throttle again. You quickly start to time the just-right moment for lifting off and by how much, which is curiously satisfying. The same thing happens when hustling along a mountain road – perfectly timing the throttle lift-off point adds a surprising amount of driver involvement.

You can still drive the old-fashioned way if you like, and more aggressive driving or emergency braking still requires a dedicated push of the left pedal. When doing so, you’ll find a firm, reassuring pedal feel without any weirdness associated with transitioning from regenerative to mechanical braking. It feels totally normal. I certainly would’ve used it more under normal conditions on my drive route through northwest Oregon’s mountain roads, but predictably damp pavement kept speeds prudent and usually within the capabilities of the regenerative system.

That said, the Mach-E could be hustled along quickly enough to reveal tightly controlled body motions and a firm, yet well-damped suspension that also managed to gobble up nasty pavement without harshness. Despite its crossover body and significant curb weight of around 4,800 pounds, it feels smaller and lower than the typical sporting crossover. The difference between the Mach-E and the morbidly obese Audi e-Tron Sportback is profound. The curvaceous hood rises at the corners with a hint of Infiniti FX50, making it easy to place in corners. The steering is precise and weighted comparably to a Mustang’s, but response and feel do not equate. It feels more artificial and distant. If there’s a dynamic area the Mustang Mach-E could be better aligned with Mustang O.G., it’s this. 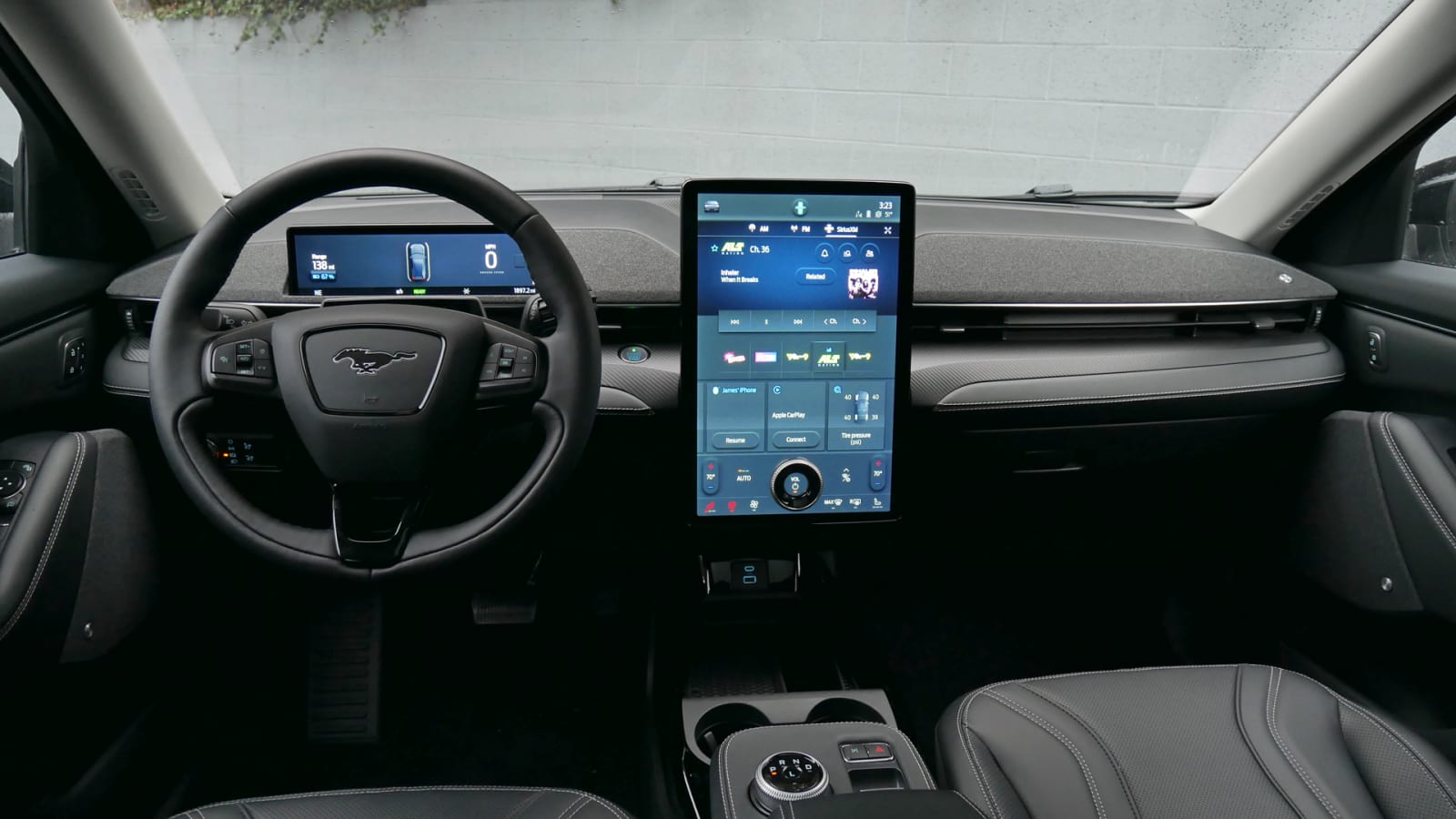 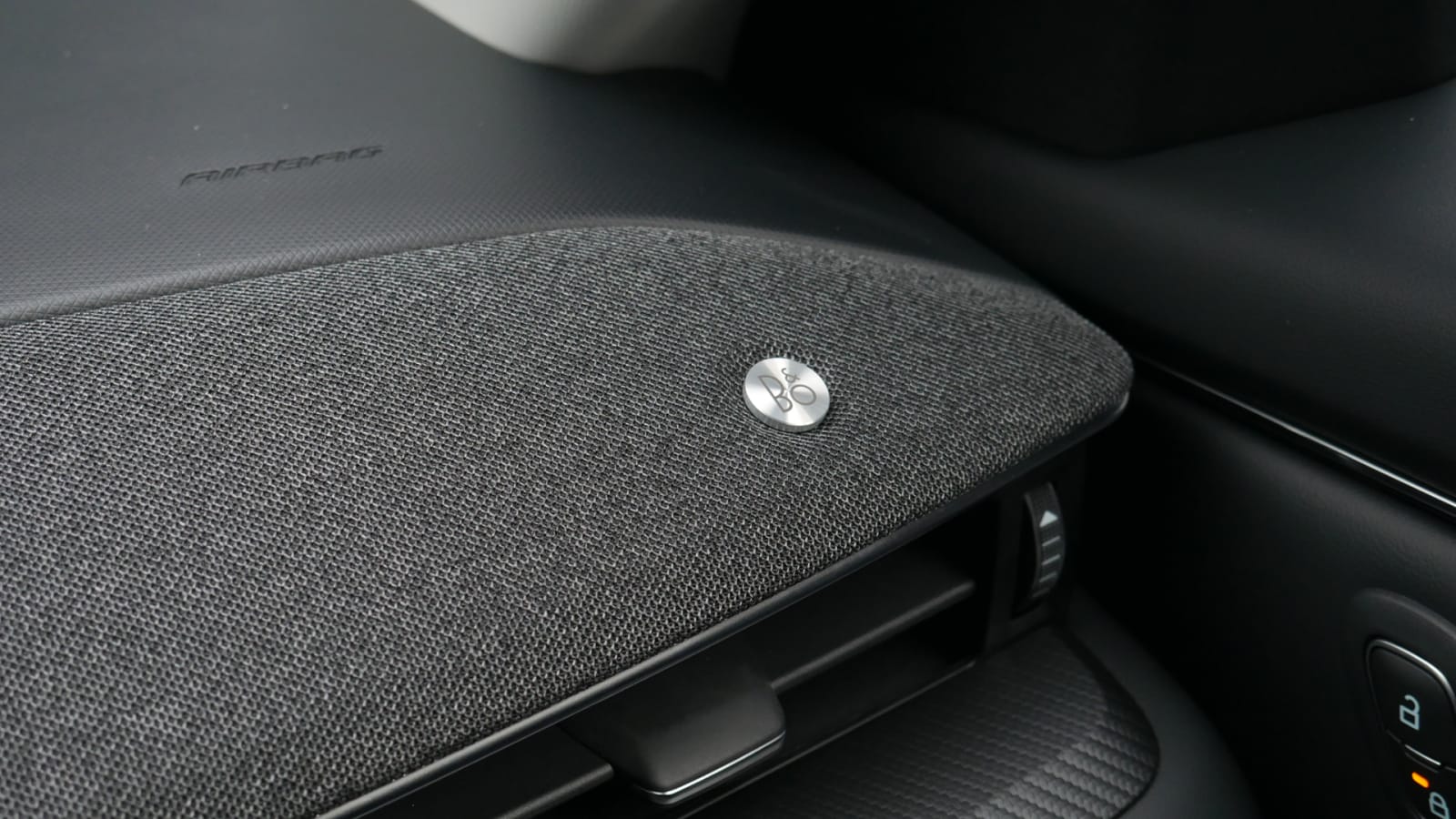 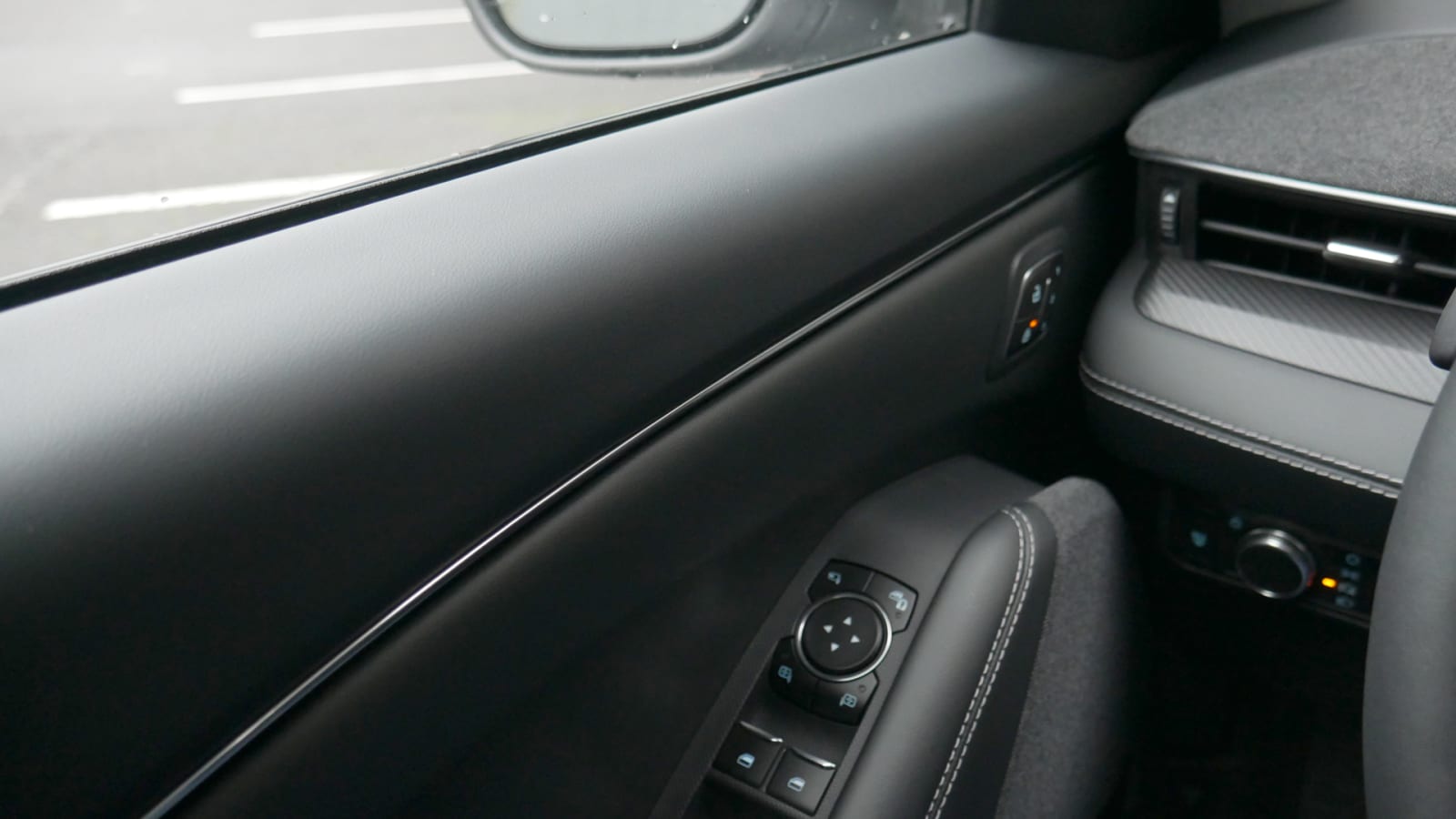 There’s nothing remotely Mustangy about the interior apart from the horse on the wheel, which is just fine. Materials quality is far better than expected, both in terms of regular Mustang as well as Ford’s recent disappointing efforts in the Escape and Explorer. Plastics are of a higher quality, and the dash and doors are mostly covered in a padded, leather-like surface that’s similar to what you’d find in a Lincoln. The Premium also has a classy gray cloth trim across the dash.

Then there’s the design. Slapping a 15.5-inch vertically oriented touchscreen and 10.2-inch letterbox widescreen instrument panel into a retro cabin would’ve looked ridiculous, like putting an Apple Watch on Big Ben. Instead, it’s clean and modern, but with just enough traditional controls. That jumbo touchscreen is also one of the best examples of this growing trend. Rather than stuff as much as possible on the screen, it makes good use of the extra real estate by making buttons and displays bigger and more easily read at a quick glance. Having a separate instrument cluster is also appreciated, which is absolutely a reference to Tesla. Don’t tell me the Model Y’s reliance on one screen is anything other than a cost-saving move.

There didn’t seem to be a way to change what is displayed in the instrument panel, however. A driver assistance icon is perpetually in the middle with the speed readout on the right. Considering the regular Mustang’s customizable, multi-color gauges, not having design options seems like a missed opportunity (admittedly, little amber lines appear when in “Unbridled” mode). You can choose between light and dark modes for both screens, but I left both in dark – the “light” mode is blindingly white for a car interior. 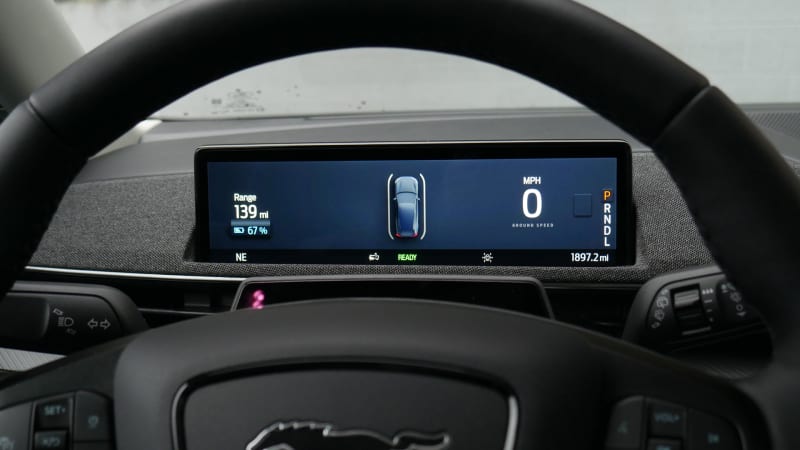 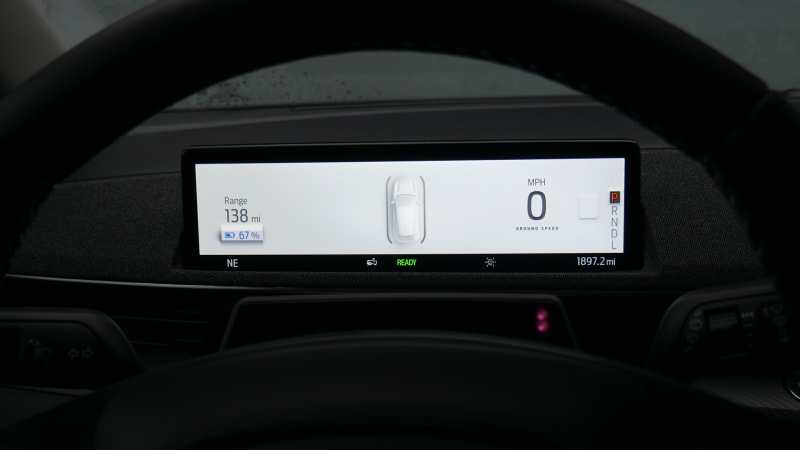 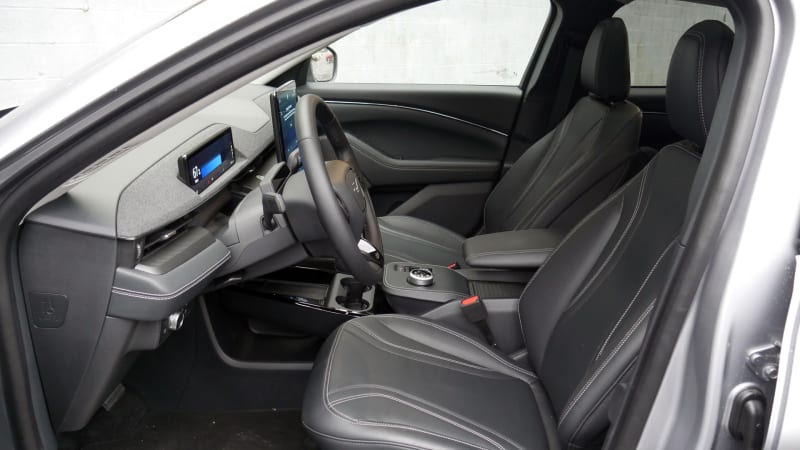 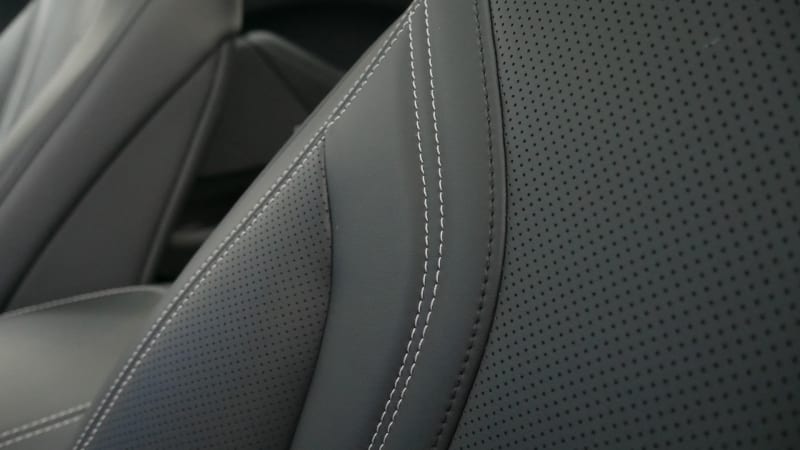 Ford’s new ActiveX fake leather looks and feels like the real stuff, but the seats it covers disappoint. The driver seat annoyingly adjusts only six ways (there’s no tilt-up for the front of the seat) and the seat itself is a bit too squishy with insufficient lateral support. In that way, the Mach-E is exactly like a regular Mustang! There are no Recaros available here as an upgrade, though. The back seat is also flat and doesn’t recline, but space is sufficient for a 6-footer to sit behind himself and for an infant car seat to fit in the middle with the front seat fully rearward. As for the surprisingly spacious cargo area, check out our luggage test.

Regarding the electric range, we’ll happily rely on the official EPA rating of 270 miles for the Mach-E with 88 kWh Extended Range battery and all-wheel drive. Much as with reporting as-tested mpg, my testing regimen is hardly indicative of normal driving conditions (or scientifically repeatable ones for the sake of comparison). Chilly temperatures reduced possible range by 4% according to the car, while my insistence on using the heater further reduced range by 10%. Driving “Unbridled” through the mountains sure didn’t help, either. As a result, my calculated actual range was 220.6 miles after averaging 2.507 miles per kWh. That actually worked out to be more than the 204 miles the car estimated when setting off on my 136-mile journey. 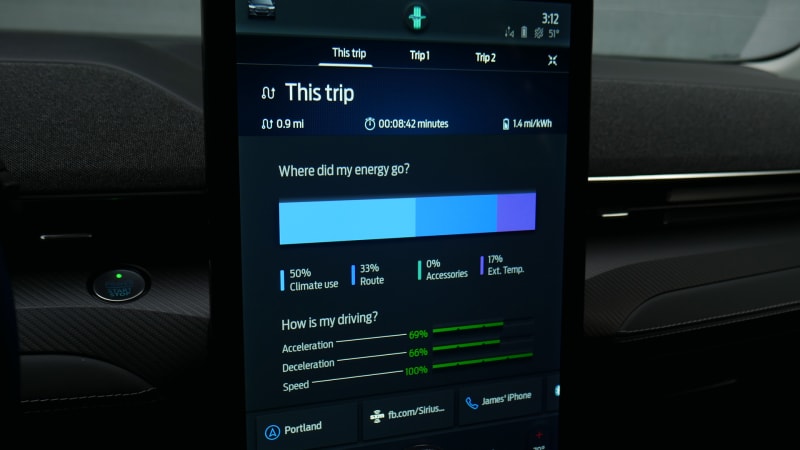 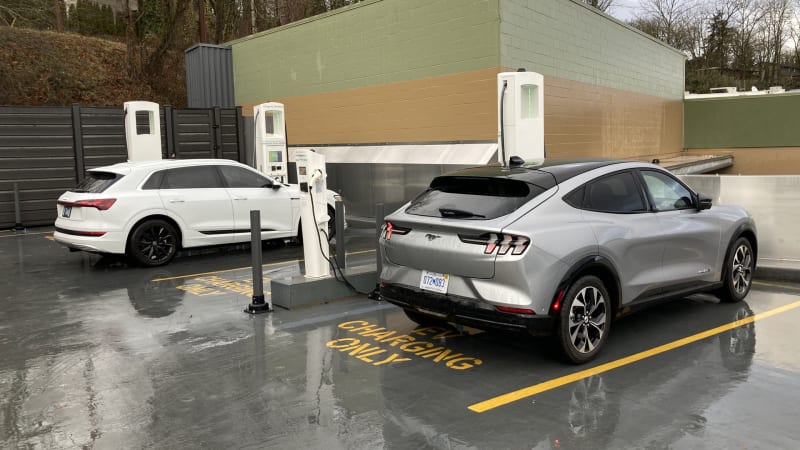 Thereafter, I mostly kept the battery topped up using a regular household plug, but as with all pluggable cars, a proper home charger is a must. I used one of the rare 150-kW fast chargers here in Portland, an Electrify America unit at a Fred Meyer grocery store, and was impressed by the ease in which the FordPass charging service made the process. I simply plugged in and the car automatically sent the account info to the charger – no need to scan a separate card or input information. The owner of an Audi e-Tron using the same station was impressed by this simplicity. The app also helps you keep tabs on the state of charge and find chargers in the FordPass network. Whether those chargers are actually open proved unreliable, but that’s not Ford’s fault.

Many will fault Ford for besmirching the good name Mustang, but they shouldn’t. Besides that already happening long ago, I argue the decision to name it Mustang and then imbue it with just enough Mustangy flavor is a good one. Ford is a time-honored brand, but it’s not a sexy one. It quite simply does not have the brand equity necessary to get an electric car noticed in the places where electric cars are popular (cough, California). Mustang does. In fact, it has so much that it hasn’t worn a Ford badge in decades. You don’t have to know about cars to know about Mustang — it’s a car that’s been driven by Dan Gurney and my grandmother. With the Mustang name and flavor, Ford’s electric crossover is more distinctive, more easily recognized and therefore more competitive against Tesla, whose cars are indisputably buoyed by the elephantine strength of its brand.

The car itself is better for it as well. Does it drive like a Mustang? No, but a Porsche Cayenne doesn’t drive exactly like a 911. Indeed, that is the best analogy for the Mustang Mach-E. Perhaps with time and updates, certain dynamic attributes – most hopefully the steering – will more closely resemble those of its namesake. In the meantime, however, much like the original Cayenne, the Mustang Mach-E has just enough in common with the regular Mustang in spirit to make it far more compelling than any Escape-looking Ford electric car with the same capabilities would’ve been.