It’s been more than two decades since Maserati was in the business of developing an in-house 90-degree V6 engine, and the last one it had traced its genealogy back 30 years. That story started in 1968, when Citroën took a controlling stake in Maserati, and the French requested that the Italians create an engine for the 1970 Citroën SM. Famed Maserati engineer Giulio Alfieri designed a 2.7-liter V6 producing 170 horsepower that could be built using Maserati’s existing V8 tooling, hence the 90-degree angle. Alfieri then revised that V6 and bored it out to three liters, upping output to 187 hp, for use in the 1972 Maserati Merak.

A decade later, Maserati – now owned by Alejandro de Tomaso, who had fired Alfieri — started with Alfieri’s V6 philosophy when developing a mill for a new sports car. The resulting V6 unit, in 2.0-, 2.5-, and 2.8-liter displacements, was the first twin-turbocharged motor put into a production car. That car? The hot, gorgeous mess known as the 1984 Maserati BiTurbo.

When the Ghibli exited production in 1998, Maserati ceded engine development duties to Ferrari by order of Fiat, which owned both automakers.

Now we have the Nettuno, a 90-degree 3.0-liter V6 created to power Maserati’s renaissance and making its debut in the chunky, aerodynamic form known as the MC20. At 630 horsepower and 538 lb-ft of torque, the engine almost picks up where the Ghibli Cup left off: with 210 horsepower/liter, the Nettuno is one of the most power-dense in the world. The Bugatti Chiron, Ford GT, and McLaren 756LT don’t crack 200 hp/l. The only production cars in the ballpark are Euro specials like the Mercedes-AMG A45 (208.4 hp/l). Beyond it are seven-figure hypercars like the SSC Tuatara (229 hp/l) and Koenigsegg Jesko (256 hp/l on gas, 320 hp/l on E85).

The word we’re looking for in Italian is bentornato. Welcome back, Maserati.

The automaker recently hosted a virtual tour of its Engine Lab in Modena to show off the work put into the Nettuno’s intricate internals and assembly, and our first question probed the Nettuno’s origins. We’ve written before about reports that the Nettuno is derived from the Ferrari F154 V8 that Maserati uses in the top Ghibli, Quattroporte, and Levante trims. Alfa Romeo turned the F154 into the six-cylinder 690T engine for its Giulia and Stelvio Quadrifoglio trims. Bozi Tatarevic investigated the Nettuno, scanning everything from part numbers to cooling jackets to determine that while the Nettuno’s heads are unique, fundamental elements of the block’s design and many ancillaries appear cribbed from the Ferrari and Alfa Romeo antecedents.

What’s more, the Nettuno is designed as two three-cylinder motors working off a common crank containing four main journals and three rod journals that each hold two pistons. As an even-fire engine, the crank experiences a firing event every 120 degrees. These principles could all have been lifted from the Alfa Romeo 690T.

We asked Maserati chief engineer Matteo Valentini about the F154 connection. He replied, “Of course it has solutions you can find on other engines, but please don’t be fooled by the external shape of the engine.” He admitted Maserati engineers took advantage of knowledge throughout Fiat-Chrysler – the same resource sharing one finds at other OEM conglomerates like General Motors and the Volkswagen Group. Yet, stressing the in-house, beginning-to-end development of the new V6, Valentini said the engine “is designed by us, developed by us, produced by us, and assembled by us.”

The Nettuno shares its architecture with Alfa Romeo’s 690T but is cast by a different supplier, and the block “has different content inside, it has a different bore, [and] it has different oil ducts.” In his assessment, the heart of Maserati going forward is “a brand-new project that makes use of all the experience we had in the past.” 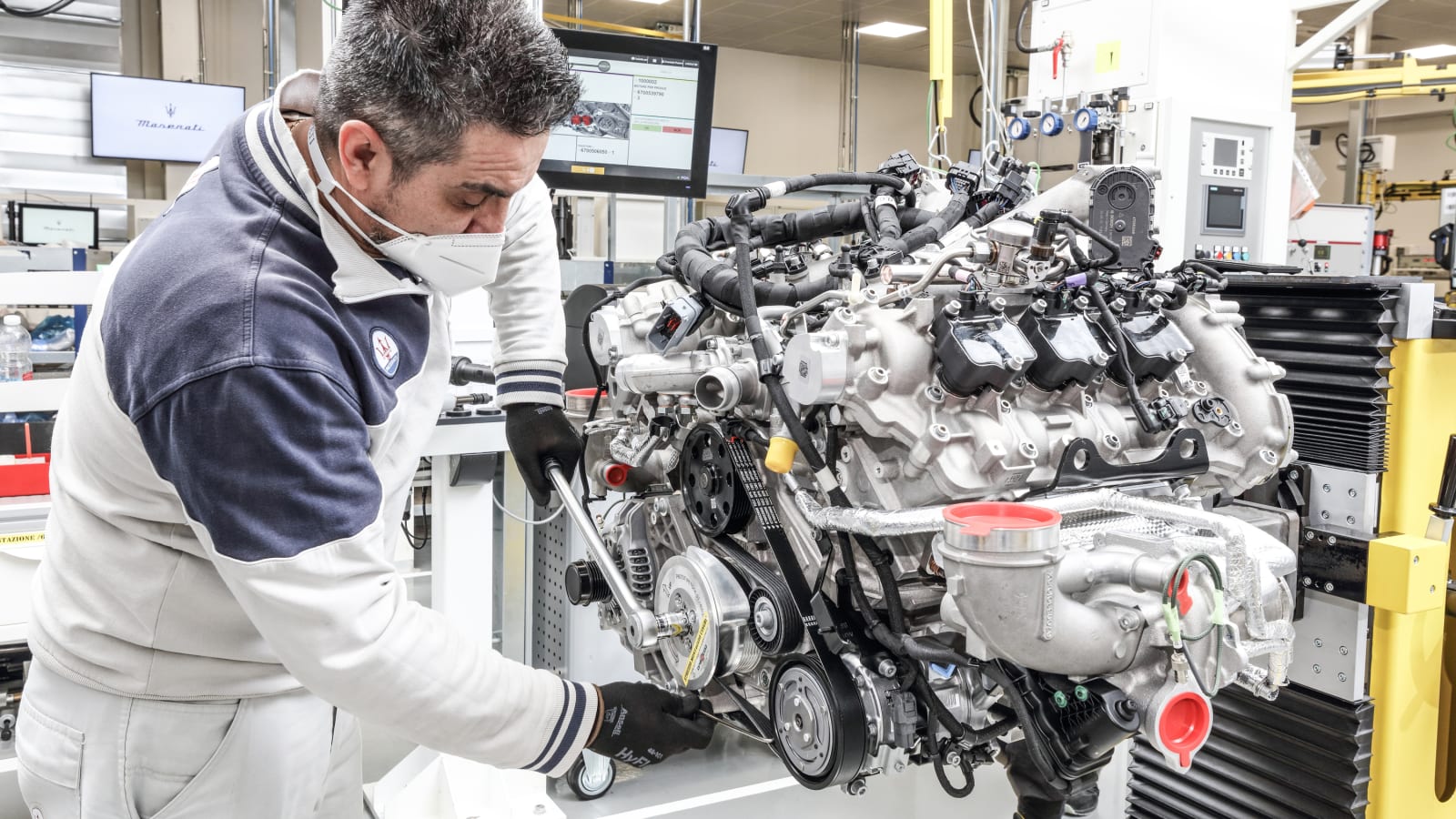 The twin-turbo V6’s killer app is unequivocally not shared with the Ferrari and Alfa engines: pre-chamber combustion, an ignition technology German supplier Mahle started working on in 2010. Mercedes-AMG Petronas F1 adopted it in 2014, and Mahle provided it for Ferrari Formula 1 cars in 2015. The tech has served large-bore stationary gas engines for decades, and Honda put a variant of this technology on its CVCC engine more than 40 years ago.

Under certain conditions, a pre-chamber atop the combustion chamber shoots directed jets of flame into the cylinder during ignition. This induces more complete combustion and reduces emissions. A cost-effective solution for modern car engines, however, needed to address shortcomings including unwanted NVH, substandard efficiency at low engine loads, and stringent emissions regulations.

Pre-chamber ignition, which comes in active and passive forms, generally uses one spark plug. Maserati’s passive method fills in the pre-chamber’s weak spots by using two. One plug sits in the 1.5-cc pre-chamber. A second plug pokes its electrode into the side of each oversquare chamber. This makes the Nettuno a twin-spark engine with dual injection; port-injection works on a 6-bar fuel rail, direct-injection on a 350-bar fuel rail. Maserati’s patent application for the tech says it enables a 15% increase in compression ratio and a fuel consumption reduction of up to 30%. (Before anyone accuses Maserati of stealing Alfa Romeo’s twin-spark cleverness, Maserati was making twin-spark engines as far back as the 1950s for the inline-six in the 250 F race car, and later for road cars like the Mistral that also featured dual overhead cams, fuel injection, and hemispherical combustion chambers.)

“At mid and low loads,” he said, “the standard injection is predominant. When you go from mid to high loads, the prechamber takes the advantage, and we … play with the spark advance in order to give the right priority to one of them.”

We asked how much power the pre-chamber ignition adds, he said a touch more than 100 horsepower. The Nettuno goes from roughly 510 horsepower on standard injection to 620 or 630 with pre-chamber assistance.

Speaking of power contributions, the Nettuno’s turbos have been programmed to wind up to 3 bar (43.5 psi) so far and have electronically controlled wastegates. As for why the turbos hang off the side instead of being nestled between the cylinders, Valentini said the team looked into a hot-vee setup, but couldn’t find a simple, reliable solution able to hit the targeted 210 horsepower/liter. The traditional arrangement is cleaner and creates a lower center of gravity. 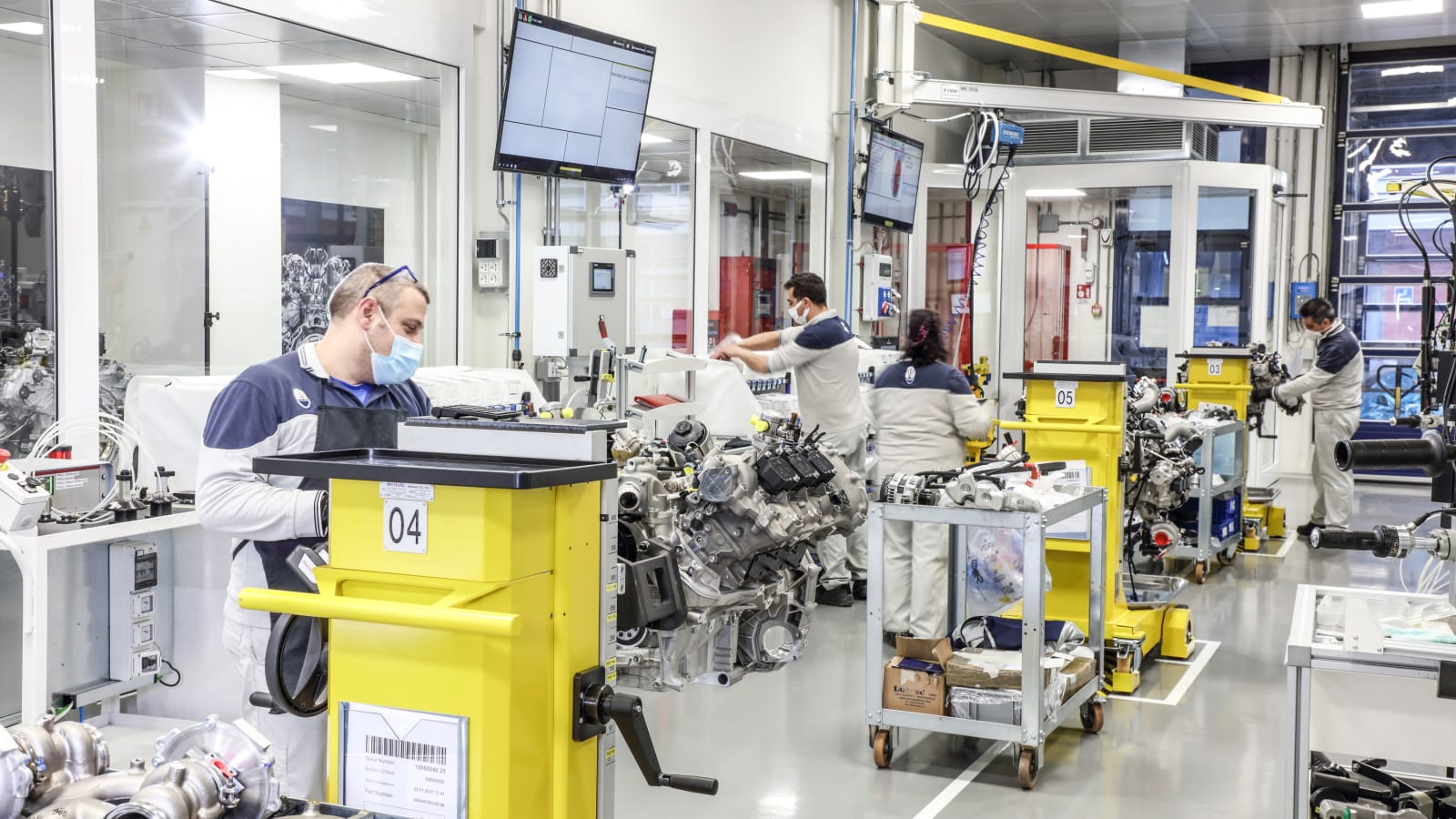 The dottori will build you, now

Maserati has not only given the Nettuno a supercar home, the engine gets supercar production techniques. There are about 1,300 parts in total, divided into roughly 100 sub-assemblies and pieces. Inside a clean room at the Engine Lab at the automaker’s historic Viale Ciro Menotti facility, a tiny number of technicians – Maserati calls them dottori (“doctors”) – turn those 100 constituents into a Nettuno in six stages. Each stage requires three to four hours, so one engine can take three full working days to complete. Powertrain facility manager Jonata Azzali told us the length of time required is partly why Maserati felt it better to spread the process among technicians instead of having one person build one complete engine.

But let’s face it, while Maserati has been lauded for hand-crafted luxury, the brand hasn’t always fared well with hand-built technology. On the Nettuno, the automaker is far more focused on eliminating failure points than celebrating individual artisans. Azzali’s tour of the build room was really a tour of the numerous digital safeguards Maserati has implemented for quality control.

The HVAC system keeps the build room at positive pressure to expel errant particles. Two screens at each build station illustrate what must be done and how it must be done. Cameras placed on the ceiling, on fixed equipment, and on tools monitor items such as proper seal placement on the cylinder liners and pistons. Electronic wrenches and screwdrivers monitor and record the torque applied to screws and bolts on every Nettuno. For the exhaust manifold, the screwdriver’s digital sensors are backed up by a camera that ensures the screws are inserted in the proper order. When assembling main and rod bearings on the crank, bar-code sensors control a set of drawers that only allow the technician to access the proper bearing for the next step in the procedure.

Toward the end of the build, a 21-point helium test checks for leaks in the injection and fuel systems. This follows leak checks performed during the assembly, like that done just after the valves are installed. Finally, every Nettuno is sent to a test bench for 40 minutes to verify its horsepower and torque figures. And once per month, Maserati selects a random engine for a four-hour bench test.

The current setup produces four to six engines per day, up to a maximum of 10. Unsurprisingly, with the Nettuno being prepped to earn its keep on racing circuits around the world – and designed without a balance shaft – Maserati engineers tuned its personality “to underline the race soul of the engine.” NVH calibration was set at idle, whereas stints at full power impart a “race feeling.”

And despite the voluminous technical considerations, feeling is what this is ultimately about. A brand preaching Italian character and passion for nearly 90 years won’t be served by mechanical excellence bereft of a soul. The answer to whether the Nettuno possesses such anima awaits in our first drive of the MC20.