CANTIL, Calif. — To be honest, I never really got the appeal of side-by-sides. The only place I encountered them was while off-roading my 2003 TJ Jeep, which seemed compact and rugged enough, but could also be a fully functioning street-legal car with air conditioning. Luckily, Honda forced me out of my bubble by giving me a spin in a 2021 Talon when we took a new Ridgeline (more to come on that) to the company’s Mojave Desert proving grounds for testing. It was lucky because as it turns out, this side-by-side is an absolute riot.

Introduced in 2019, the Honda Talon is a relatively new player in the sport side-by-side class. It debuted with two versions — the nimble 1000X and the brawnier, wider-tracked 1000R. Though it was a latecomer, Honda quickly catapulted to the No. 2 spot in sport SxS sales. Part of that has to do with the fact that the lineup expanded to include a four-seater (1000X-4) that can be had with or without Fox Live Valve shocks. Now, for 2021, those shocks can be had on the two-seat models, bringing the number of Talon models up to six: 1000X, 1000R, 1000X-4 and the Fox Live Valve versions of each.

Moreover, the Honda Talon has some serious racing cred. Not only did it win the naturally aspirated SxS class in last year’s Baja 1000, it came in second overall. And it did so with a stock engine (with a tuned ECU and minus its emissions equipment). 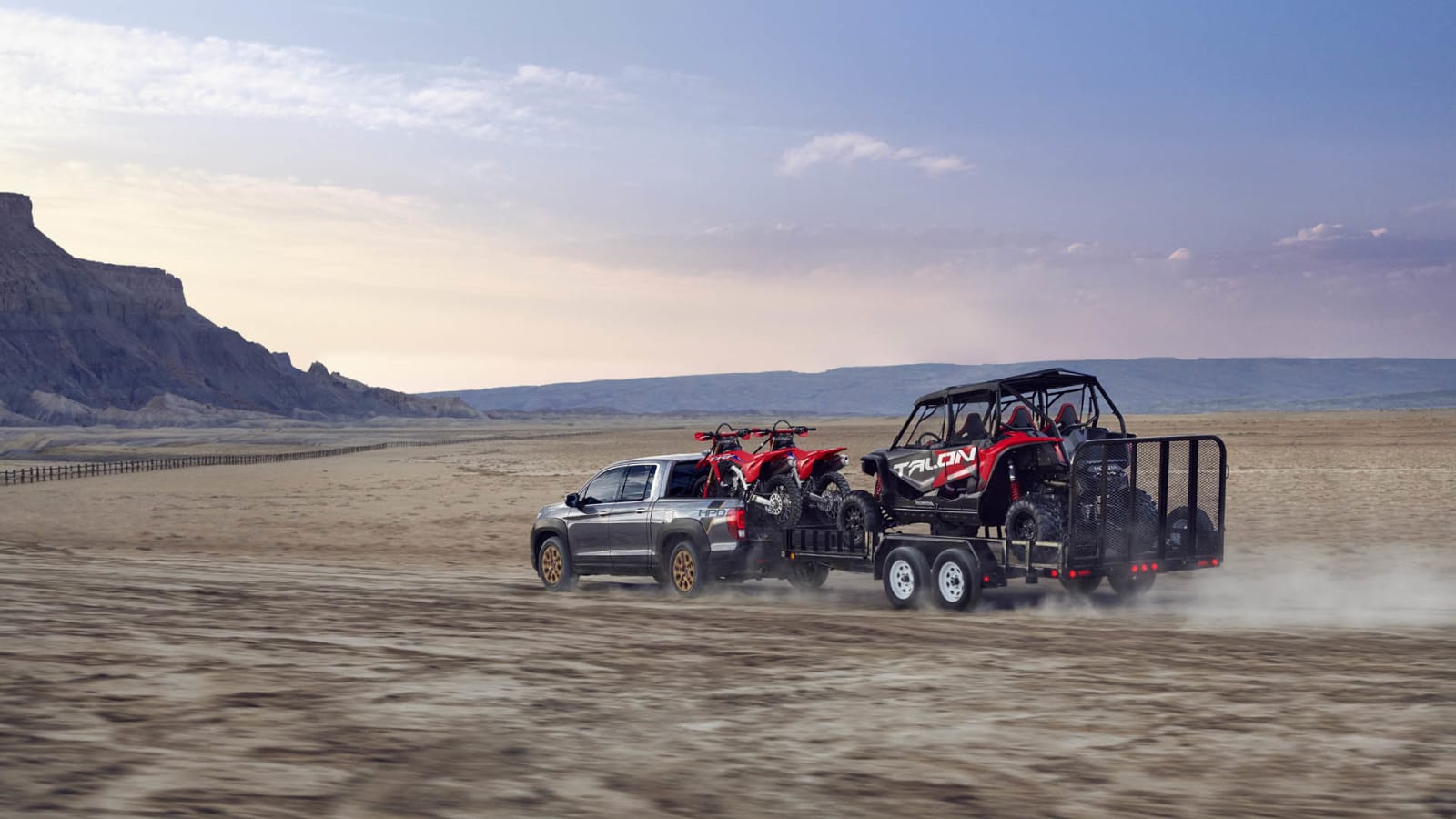 The Talon driving experience doesn’t differ much from when we first tested it in 2019. Part of the SxS’s appeal is that anyone who can drive a car can drive one intuitively (unlike, say, an ATV). There’s a steering wheel, gear selector, as well as auto, manumatic, and sport driving modes. Even the Talon’s seats are automotive-grade and provide car-like comfort, albeit with easily hose-able upholstery.

The throttle’s a touch sensitive, but it doesn’t take long to get used to the rearing launches. The 104-horsepower 999cc inline-twin shared among all Talons burbles like a dual-sport as the 1,545-pound machine claws its way up to speed. One of the Talon’s sleeve aces is its six-speed dual-clutch automatic, with paddle-shift manual mode. The Talon’s biggest competitor, the Polaris RZR, uses a CVT. As it does in cars, the DCT snaps into gear with immediacy, with none of the rev-hanging or wheezing a CVT would evince.

Perhaps the biggest change since 2019 was last year’s introduction of the aforementioned Fox live-valve semi-electronic shocks. Using a Bosch control unit, the Fox-built dampers adjust rates every 20 milliseconds, keeping the body flatter by stiffening up the front on braking or the outside wheels while turning. They’re available on any Talon model for a $2,000 premium on four-seaters and $2,100 for two-seaters, which can seem steep. But the result is quite a bit more command and confidence as you swing the rear out in a sandy, throttle controlled drift. Soon, you’re eagerly hunting for loose surface bends, grit in your teeth be damned. 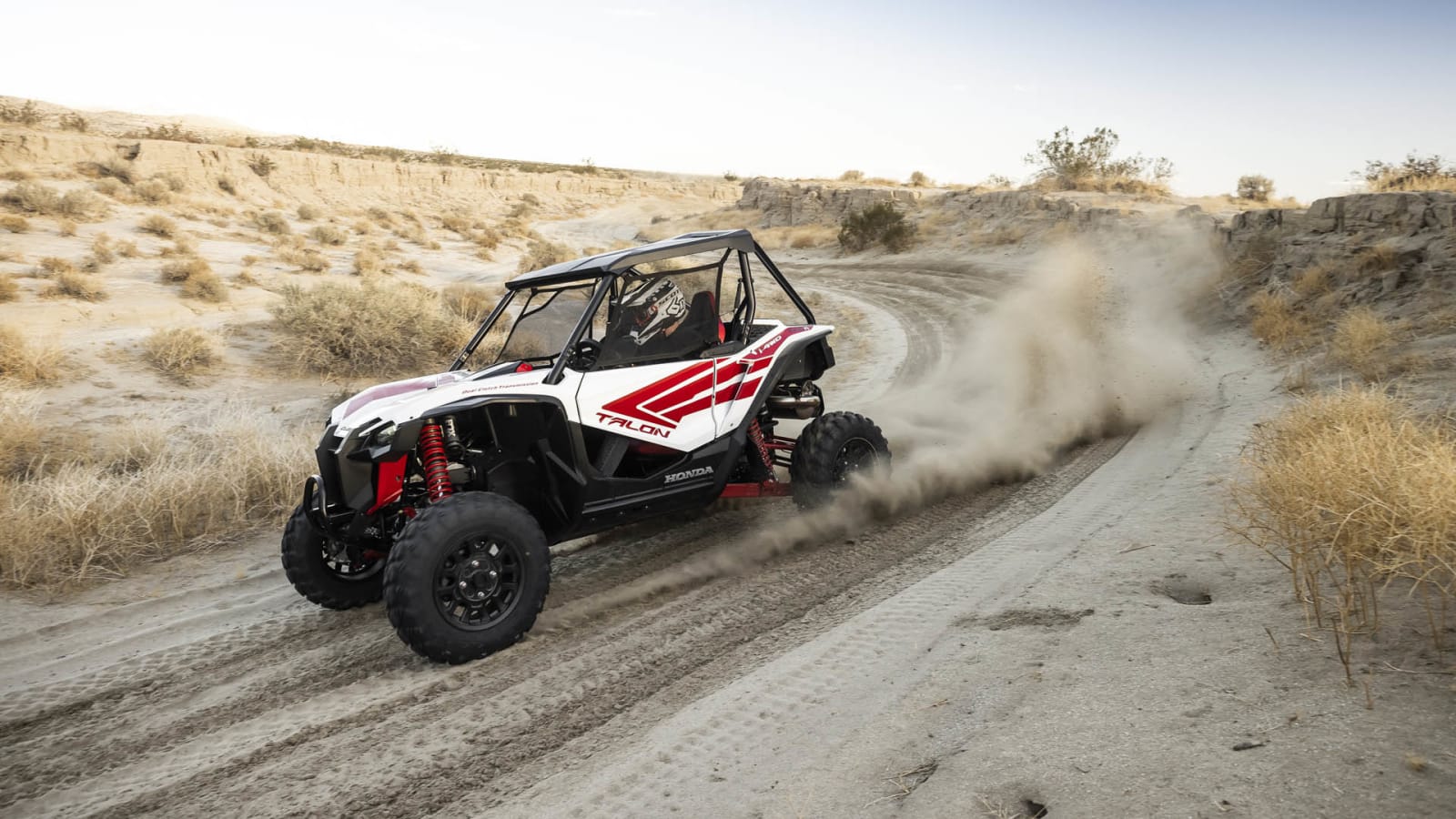 Watching the wheels articulate like squid arms over whoops and getting the tires off the ground as you crest a slope, I see the appeal now. It’s a Tasmanian devil on wheels, furiously scampering through the desert like a soldier of Immortan Joe. It’s no wonder side-by-sides have exploded in popularity — they deliver barrels of fun in a bare-bones package.

Still, the Talon starts at $20,000 for the 1000X and goes up to $24,000 for the 1000-X4 Fox Live Valve. That’s not exactly a bare-bones price, and that doesn’t include the expense of getting your non-street-legal machine to a place where you can unleash the grins. You’d still need a truck, so the auto enthusiast in me then wonders, “Why not just use the truck?”

Thanks in part to the pandemic, though, business is booming over at Honda Powersports as people pursue outdoor, socially distant activities. It certainly makes sense. RV sales are strong for the same reasons. I’m ultimately just biased towards the automotive. When I think of Talon my brain still conjures up the image of an Eagle-badged Mitsubishi Eclipse. This is most definitely not one of those.