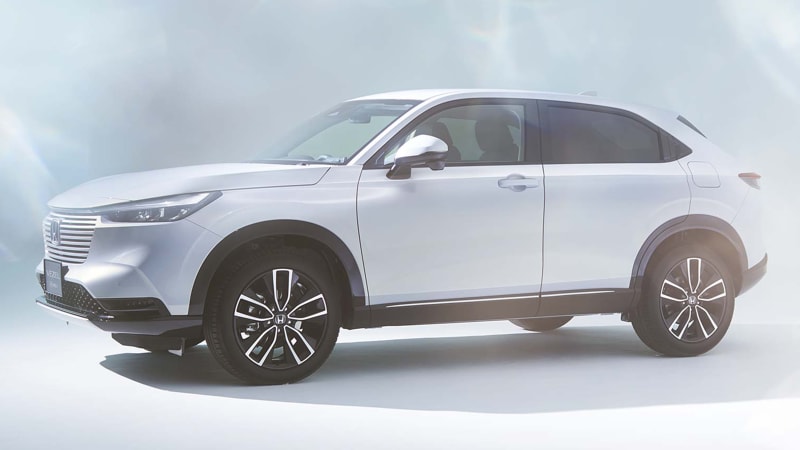 The next-generation Honda HR-V has been revealed, and in many ways it’s a major departure from the old model. Not only does it have a sportier stance, but it’s now a hybrid only. But there are still some classic HR-V features sprinkled about.

The shape of the HR-V (shown here as the Japanese-market Vezel) is much more coupelike with the forward leaning rear hatch. The tall, wide headlights and more vertical nose make it look wider and more imposing. The myriad diagonal creases of the outgoing model are gone, making the new car cleaner overall. The slatted grille is also quite interesting, as the slats appear to blend into the body work. Like the old HR-V, the new one has a rear door handle that’s integrated into the door frame, giving it a two-door appearance.

Inside, the interior looks like what has been previewed for the 2022 Honda Civic. The dash is low, wide, and minimalist, and has the popular single air vent motif. In the center stack, there are dedicated, physical controls for climate control with three stylish knobs. Pulling from the old HR-V again, the rear seat still has the versatile split fold-down and flip-up functions. Exact dimensions for the interior and exterior haven’t been provided, though, so we’re not sure how much larger the new HR-V is.

Only one powertrain has been announced for the HR-V so far: the naturally aspirated 1.5-liter four-cylinder hybrid. Though exact numbers haven’t been given, it should be the same powertrain found in the new Fit. The gas engine makes 96 horsepower and 97 pound-feet of torque while the electric motor makes 106 horsepower and 187 pound-feet. Front-wheel drive and all-wheel drive are available.

In Japan, the HR-V goes on sale this April. No release announcements have been made for the U.S., but we would expect Honda to offer it, here, considering the general popularity of crossovers. And as far as Honda’s offerings go, it sold slightly better than the Odyssey, and more than double either the Passport or Ridgeline last year. It’s possible it could use the same hybrid powertrain as in Japan and Europe, but it could also get the closely related but higher output 1.5-liter hybrid from the Insight. It’s rated at 151 horsepower combined, and its electric motor makes 197 pound-feet of torque.