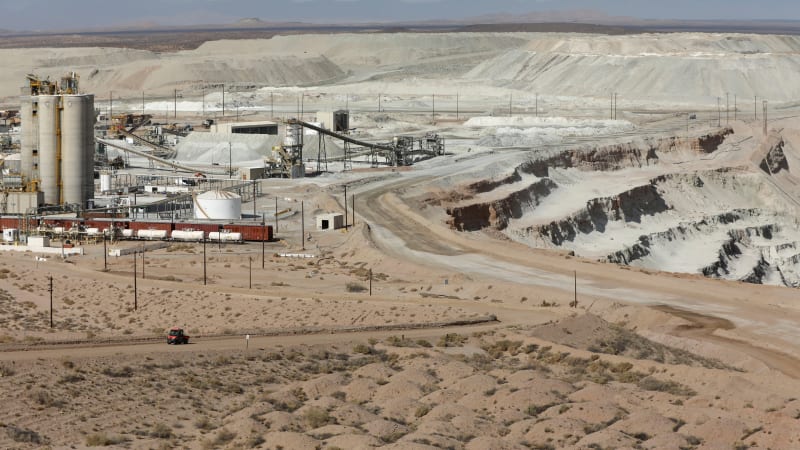 Last September, in the arid hills of northern Nevada, a cluster of flowers found nowhere else on earth died mysteriously overnight.

Conservationists were quick to suspect Ioneer, an Australian firm that wants to mine the lithium that lies beneath the flowers for use in electric vehicle (EV) batteries.

One conservation group alleged in a lawsuit that the flowers, known as Tiehm’s buckwheat, were “dug up and destroyed.” The rare plant posed a problem for Ioneer because U.S. officials may soon add it to the Endangered Species List, which could scuttle the mining project.

Ioneer denies harming the flowers. Their cause of death remains hotly debated — as does the fate of the lithium mine.

The clash of environmental priorities underpinning the battle over Tiehm’s buckwheat — conservation vs. green energy — is a microcosm of a much larger political quandary for the new administration of President Joe Biden, who has made big promises to environmentalists as well as labor groups and others who stand to benefit by boosting mining.

To please conservationists, Biden has vowed to set aside at least 30% of U.S. federal land and coastal areas for conservation, triple current levels.

But that aim could conflict with his promises to hasten the electrification of vehicles and to reduce the country’s dependence on China for rare earths, lithium and other minerals needed for EV batteries. The administration has called the reliance on China a national security threat.

The administration will be forced into hard choices that anger one constituency or another.

Rare earth magnets are used to make a range of consumer electronics as well as precision-guided missiles and other weapons.

Two sources familiar with White House deliberations on domestic mining told Reuters that Biden plans to allow mines that produce EV metals to be developed under existing environmental standards, rather than face a tightened process that would apply to mining for other materials, such as coal.

Biden is open to allowing more mines on federal land, the sources said, but won’t give the industry carte blanche to dig everywhere. That will likely mean approval of mines for rare earths and lithium, though certain copper projects — including a proposed Arizona copper mine from Rio Tinto opposed by Native Americans — are likely to face extra scrutiny, the sources said.

The White House declined to comment for this article.

Biden has promised to convert the entire U.S. government fleet — about 640,000 vehicles — to EVs. That plan alone could require a 12-fold increase in U.S. lithium production by 2030, according to Benchmark Minerals Intelligence, as well as increases in output of domestic copper, nickel and cobalt. Federal land is teeming with many of these EV metals, according to the U.S. Geological Survey.

“There is no way there’s enough raw materials being produced right now to start replacing millions of gasoline-powered motor vehicles with EVs,” said Lewis Black, CEO of Almonty Industries, which mines the hardening metal tungsten in Portugal and South Korea.

Despite that shortage, proposed U.S. mines from Rio Tinto Ltd, BHP Group, Antofagasta, Lithium Americas, Glencore and others are drawing stiff opposition from conservation groups. The projects would supply enough lithium for more than 5 million EV batteries and enough copper for more than 10,000 EVs each year.

Mining companies insist that federal lands can still be protected while the U.S. boosts output of minerals needed to accelerate the EV transition.

Former U.S. President Donald Trump and the mining industry “pushed the narrative that we need to mine everywhere and undercut environmental safeguards in order to build more batteries,” said Drew McConville of The Wilderness Society, a conservation group. “We have confidence that the Biden administration is going to see through that false narrative.”

Earthworks and other environmental groups are now lobbying automakers to only buy metals from mines deemed environmentally friendly by the Initiative for Responsible Mining Assurance (IRMA), a nonprofit group. BMW, Ford and Daimler have agreed to abide by IRMA guidelines, and other automakers may follow suit.

Tom Vilsack — the secretary of agriculture, the department that oversees the Boundary Waters — has in the past opposed the Twin Metals project, arguing that it threatened wilderness and marshlands.

Deb Haaland, the new secretary of interior, the department that controls most federal land, previously voted for a bill that would have banned copper sulfide mining in northern Minnesota. That bill, authored by U.S. Representative Betty McCollum, a Minnesota Democrat, will be reintroduced this month, her aides told Reuters.

Conservationists nonetheless remain concerned that the appeal of copper for EVs and other renewable energy devices may help the mines ultimately get approved.

“If these were coal mines, I’d feel much more comfortable knowing they wouldn’t be approved,” said Pete Marshall of Friends of the Boundary Waters.

In Arizona, Biden promised Native Americans — whose votes helped him win the battleground state — that they would have a “seat at the table” if he defeated Trump. Many Native Americans are worried that Rio Tinto’s Resolution proposed copper mine would destroy sacred sites considered home to religious deities.

Other controversial projects include Idaho’s Stibnite proposed mine, from John Paulson-backed Perpetua Resources Corp, which is under fresh scrutiny by U.S. Environmental Protection Agency staff over fears it would pollute Native American fishing grounds. The mine would produce gold and antimony, used to make alloys for EV batteries.

In Nevada, the Department of Wildlife worries that the lithium mines planned by Lithium Americas and others would harm trout, deer and pronghorn habitats. The Lithium Americas mine received federal approval last month, but ranchers have sued the U.S. government to reverse that decision.

In Nevada, the death of the Tiehm’s buckwheat flowers at Ioneer’s proposed mine site remains a point of contention. The U.S. Fish and Wildlife Service said that thirsty squirrels may have gnawed the roots of more than 17,000 flowers for water amid a drought in the state.

The Center for Biological Diversity, which opposes the mine, said there was evidence that humans destroyed the flowers. “The targeted nature of the damage, combined with the lack of feces, pawprints, hoofprints, or other evidence of wildlife suggest human involvement,” the group said in a court filing.

The Fish and Wildlife Service is now set to rule this summer on whether the flower is an endangered species — a designation that would prevent development on much of the land Ioneer is trying to mine.

Ioneer has hired scientists to move the flowers to a new site, though it’s unclear if that process will succeed. “We can extract this lithium and also save this flower,” said James Calaway, Ioneer’s chairman.