Audi’s volume seller hasn’t been playing with a full deck. You see, the Q5 was redesigned before Audi introduced its latest MIB 3 infotainment system and updated design language that features angrier grilles differentiated by model and accented in matte silver trim. As a result, taking a peak at the other Audis in the showroom would quickly reveal the Q5 to be behind the times. The updated 2021 Audi Q5 changes that, but only to a point.

Since there aren’t any significant mechanical updates, we’ll table the driving experience for a moment and focus instead on that infotainment system, since the majority of changes, benefits and detriments are directly associated with it. Although MIB 3 brings with it faster processing speeds, higher-resolution graphics, natural voice commands and a larger standard central display (10.1 inches), it’s the switch to a touchscreen interface that makes the biggest difference.

As in those other, newer Audi models, the touchscreen is an impressive unit. Actually, “press screen” is probably a more accurate term since it a requires a more dedicated press that engages the icon you want with a reassuring haptic response and a click not unlike you get with the brand’s high-quality switchgear. This also makes it 100% reactive to gloved hands and ultimately more like regular-old physical buttons.

Yet, the Q5 keeps more of those regular-old physical buttons than its more recently redesigned siblings. Specifically, it keeps physical climate controls rather than switching to a second touchscreen as in the A6, Q8, e-Tron, etc. The reason is the Q5’s older architecture just isn’t compatible, but honestly, we can’t say you’ll miss the second screen. It’s pointlessly showy and our staff unanimously prefers the buttons and knobs anyway.

By switching the infotainment system to a touchscreen, however, the old MMI controller and surrounding menu buttons have been removed from the center console. In their place is nothing – just a hole big enough for a Kleenex packet. It’s as vestigial as it looks. A bin a few inches forward is similarly only big enough for a Kleenex packet and therefore too small for any smartphone sold in the last decade, which seems like a missed opportunity given that it’s adjacent to a USB port. A third, skinny bin to the right of the shifter can hold a phone, but is not adjacent to a USB port. Wireless charging is available, but herein lies another problem. It’s on a sliding tray that covers the cupholders or slides back into the small under-armrest bin, thereby crushing larger items in that bin.

Basically, the whole thing needed a re-do – both to better utilize the space vacated by the MMI controls as well as correct existing flaws. It’s a surprisingly half-hearted effort on Audi’s part and it’s not the only one. The wood trim is unconvincing compared to past Audi efforts, and the plastics quality on the center console and doors is substandard for the brand as well as the compact luxury segment. The pieces look and feel like they were sourced from Volkswagen. The interior even smells a bit like a Volkswagen, though that’s more an observation than a problem.

There are other changes for 2021. The styling has been tweaked, but said tweaking differs by powertrain. We’ll leave the image below to explain the front fascia differences. At the rear, the lower bumper and exhaust is the key differentiator: the 45 TFSI has hidden exhausts, the plug-in hybrid ironically has them visible and the SQ5 has quad round pipes.

Little has changed about the way the Q5 drives, which is just fine. It’s one of the smaller compact luxury SUVs and it feels like it behind the wheel, transitioning through successive corners with poise thanks to a well-sorted chassis and intelligent Quattro all-wheel drive. The ride is buttoned down and sophisticated, striking a terrific ride/handling balance without fancy adaptive dampers. The steering is rather numb, though, and the Dynamic effort setting is more like the one-size-fits-all setup of previous-generation Audis. In other words, it feels like the normal setting – Comfort and “Auto” have too much play and accentuate the numbness.  Thankfully, an Individual mode allows for the heftier(ish) steering without the caffeinated Dynamic powertrain settings.

As for the powertrain, only the base 2.0-liter turbo (officially dubbed 45 TFSI) gets an upgrade. A 12-volt mild hybrid system has been added, but it provides no motive force. The added 13 horsepower for 2021 is the result of mechanical changes to the engine itself, and brings output up to 261 hp and 273 pound-feet of torque. A seven-speed dual-clutch automated manual and “Quattro with ultra” continue to be standard, the latter indicating the front-biased version of Audi’s all-wheel-drive system that sends power rearward when conditions demand.

The SQ5 (pictured below) and its 349-hp 3.0-liter turbo V6 carry over unchanged, but a recalibrated eight-speed automatic results in 0.4 second getting lopped off the 0-60 time, which now sits at 4.7 seconds. It gets the regular version of Quattro with its default 40:60 rear-biased torque split. We tested the plug-in hybrid 2021 Q5, however, which is completely carryover having been only introduced last year. This is our first drive of this powertrain in the Q5. 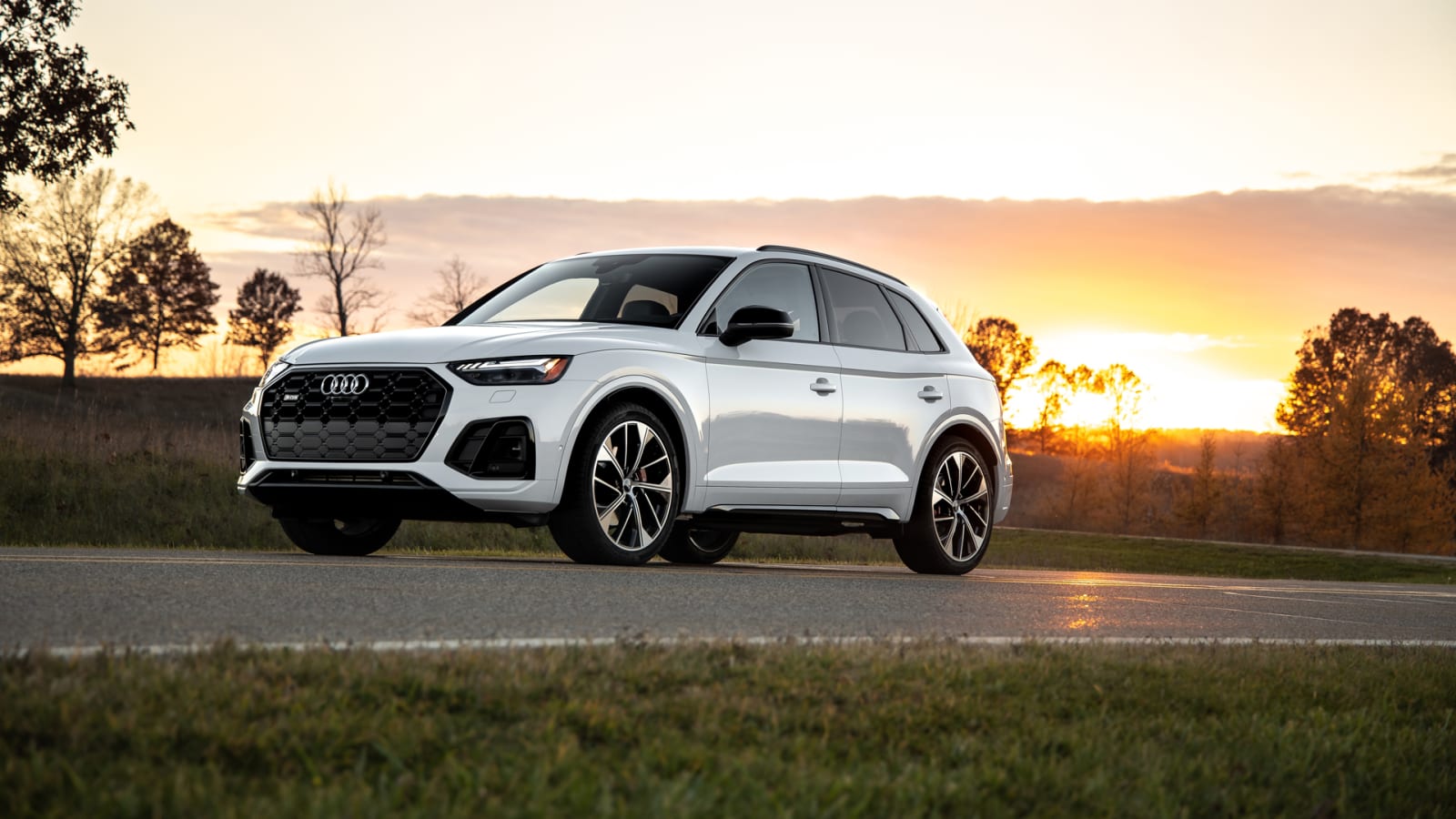 That the Q5 still manages to feel as agile as it does despite adding a 14.1 kWh battery pack under the cargo floor is impressive. So too is the acceleration, as the 2.0-liter turbo-four and single electric motor pump out a combined 362 horsepower and 369 pound-feet of torque. Even with the battery’s all-electric range depleted, acceleration remains pleasingly brisk (that’s not always the case with plug-in hybrids). The 0-60 time is 5 seconds flat. The electric motor also smooths out the four-cylinder’s edges in sound and feel, resulting in a level of refinement reminiscent of a V6. Having a dual-clutch automatic rather than some e-CVT helps, too.

Of course, ultimate refinement can be found when running in all-electric mode. We’d avoid the Eco drive mode and its disconcerting detented accelerator, and the regenerative braking tends to increase inconsistently at times (most notably downhill), but in general, it’s a well-executed electrified effort. The official range is 19 miles and we saw a little less than that in steady driving around suburbia with few stops and starts. That may seem uninspired, and perhaps it is, but it’s also essentially the same as the BMW X3 and Volvo XC60 plug-in hybrids. We also saw an indicated 29.3 mpg in 84 miles of mixed suburban, highway and mountain road driving. That compares to the base 45 TFSI’s combined rating of 25 mpg combined.

That may not be a huge gain, but like all plug-in hybrids, the more you drive in that all-electric range, the more efficient it becomes. There’s also the matter of its significant performance advantage and the $6,712 federal tax credit that effectively brings its base price of $52,995 to within striking distance of the 45 TFSI’s $44,395. Throw in the extra tax credits many states offer and the plug-in hybrid essentially becomes the cheapest Q5.

Yet, a similar value story can be told about the plug-in-hybrid versions of the BMW X3, Mercedes GLC and Volvo XC60, which hybrid or no, remain stronger overall than the Q5 despite the updates for 2021. Their interiors are a big part of that: they are more spacious, have better materials, and don’t look or feel as retrofitted (most notably the Mercedes, which was similarly updated with a new infotainment system). So while the 2021 Q5 will fit in better in Audi showrooms, there’s certainly more that could have been done.