The Geneva International Motor Show will return for 2022

Win an SUV | The best giveaways of the week, including a Defender EV

Travel numbers climb as Americans hit the road for holiday

Rolls-Royce last year trademarked the name Silent Shadow with the German patent office, and that moniker is likely to be applied to the British luxury carmaker’s upcoming battery electric vehicle. In an interview with Bloomberg Television, Rolls CEO Torsten Müller-Ötvös confirmed that the company is working on a purpose-built EV. While he would not reveal the scheduled launch date, Rolls-Royce has previously said an EV model would arrive before the end of the decade.

The Silent Shadow name echoes the Silver Shadow of 1965-1980. Although Rolls-Royce has previously ruled out doing a plug-in hybrid, the German-owned British automaker has been inching toward full-electric vehicles for some time. At the 2011 Geneva auto show, it introduced an electric version of the last-generation Phantom named 102EX. More recently in 2016, it unveiled the stunningly futuristic 103EX concept, which was fully electric.

“Electrification fits perfectly with Rolls Royce — it’s torquey, it’s super-silent,” Müller-Ötvös said. It’s true that, at Rolls-Royce, the sound of the car’s engine has never been a selling feature. Instead, the brand has long promised near-silent motoring.

Indeed, a 1958 ad for Rolls-Royce by advertising legend David Olgivy, makes a claim to the car’s quietness. And that ad has become what many consider to be the most famous auto ad of all time: “At 60 miles an hour the loudest noise in this new Rolls-Royce comes from the electric clock.” Maybe they’ll want to revisit that claim when the Silent Shadow makes its debut. 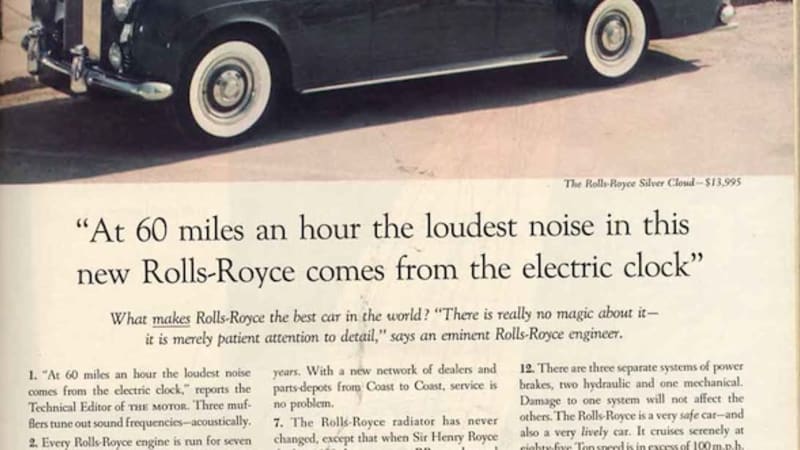