Maserati has started testing the Grecale, its second SUV, on the streets of Modena, Italy. Aimed directly at the Porsche Macan, the Levante’s smaller sibling will take the 107-year old Italian firm into a lucrative new segment.

Klaus Busse, the head of Maserati’s design department, told Autoblog that the new MC20 coupe points to the direction stylists will take the rest of the range in, and official spy shots give us a better idea of what he meant. It looks like the Grecale’s front end is dominated by an oval grille shaped a lot like the MC20’s. An image we took at the company’s headquarters in the fall of 2020 provides an even clearer view of what the model will look like. 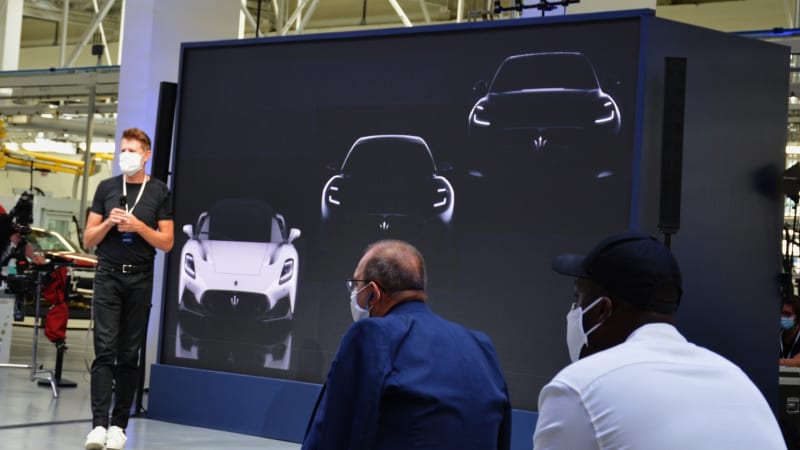 Its overall proportions remind us of the Levante‘s, meaning it’s far more sporty than utilitarian — you didn’t think Maserati would try to rain on the Ford Bronco‘s parade, did you? Even several layers of psychedelic camouflage can’t mask the shapely quarter panels and the sloping roof line accented by a spoiler.

It’s too early to tell what’s under the camouflage, let alone what’s lurking beneath the sheet metal, but unverified rumors claim the Grecale shares its basic underpinnings with the Alfa Romeo Stelvio, which is widely praised as one of the best-driving SUVs on the market. If the report is accurate, Maserati’s next SUV could land with four- and six-cylinders on its palette of available engines. One might be the 3.0-liter Nettuno developed for the MC20.

Maserati will take the Grecale on a world tour to put it through its paces in the freezing cold, in triple-digit heat, on challenging race tracks, and even on a few off-road trails. Its official unveiling is scheduled for later in 2021, and series production will start in Cassino, Italy, shortly after. We expect to see it in America as a 2022 model.