The full-size SUV segment gets a major new player this year in the form of the 2022 Jeep Wagoneer. This new body-on-frame beast packs a standard Hemi V8 with nearly 400 horsepower, seating for either seven or eight, and enough towing capacity to move a small house. The regular Wagoneer will compete with the mainstream Chevrolet Tahoe and Ford Expedition, while the Grand Wagoneer will go up against the premium entries from Lincoln, Cadillac and GMC.

Jeep’s entry is actually a good bit more expensive than the Chevy and Ford at the low end, but Jeep’s angle with its fixed-roof SUVs has long been more premium than its mainstream contemporaries. For the purposes of this spec comparison, this really only matters in one category: powertrain. However you choose to ingest this, we just want you to remember that when we say “Chevy” here, we could just as easily be referring to the GMC Yukon, which plays in a more premium space. Let’s take a look at the chart and go from there. 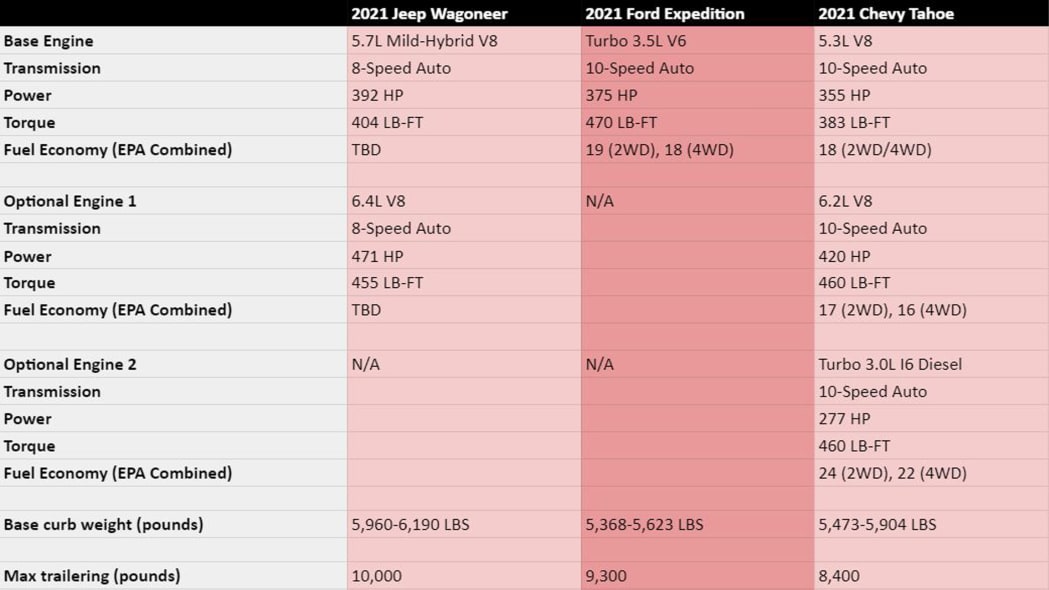 The Wagoneer comes out swinging in this department. As it turns out, the Jeep’s premium comes with some serious benefit here in the form of a standard 392-horsepower V8. The 5.7-liter mill is fitted with a mild-hybrid setup and produces 404 pound-feet of torque. This is the most powerful standard engine in the segment, though it falls short of the Expedition’s 470 lb-ft of torque. Those thirsty turbos pay dividends in that regard.

Jeep also has a leg up when it comes to its optional 6.4-liter V8. With 471 hp, it puts a bit of a hurting on GM’s 6.2-liter, but can’t top the Expedition’s torque output. Ford counts on the 3.5-liter EcoBoost’s flexibility here; no optional engine exists (although if you do want a more powerful Ford-built SUV, there’s always the 450-hp Lincoln Navigator). We expect at least a third powertrain offering from Jeep in the form of a 4xe hybrid, likely due to debut within a year or two. For the time being, it has no fuel-efficiently alternative to GM’s available diesel. Jeep takes the top nod again in towing capacity, thanks at least in part to its beefy V8s. The capability of this optional V8 comes at a cost, however. The 6.4-liter is exclusive to the much more expensive Grand Wagoneer variant.

Externally, all three are about the same size. The Wagoneer is a few inches longer and about an inch-and-a-half to two inches wider than the Expedition or Tahoe, which, in combination with its tall and wide stance will probably give it an even more substantial road presence. Jeeps advantage in powertrain turns into a bit of a hindrance in this category, however, as its iron-block V8s contribute a good bit of heft to its curb weight; the lightest Wagoneer weighs nearly 600 pounds more than the equivalent Expedition and 500 pounds more than the Tahoe. 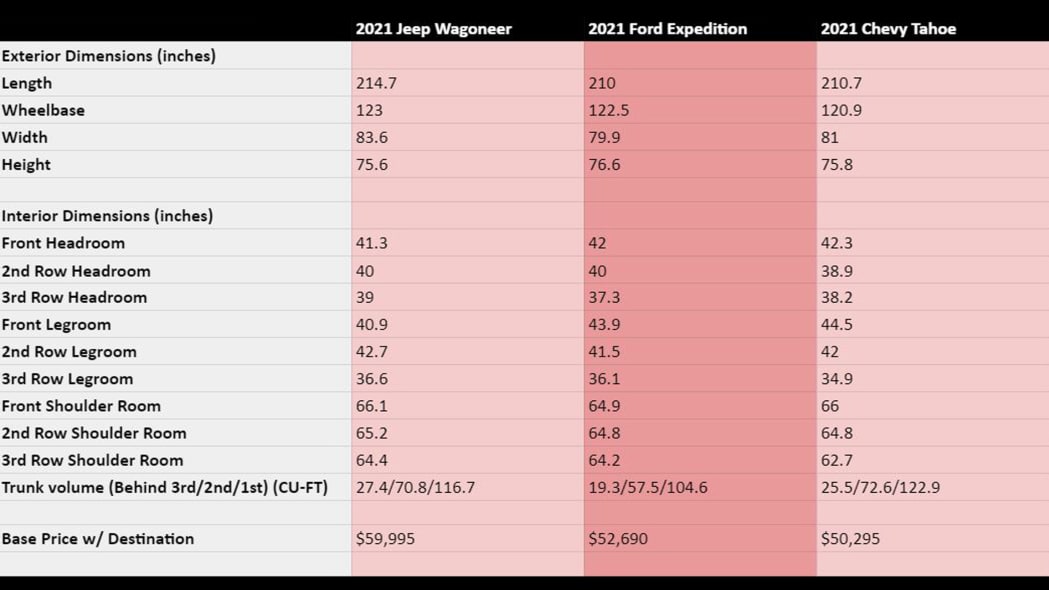 The dimensional similarities continue inside, and keep in mind that the Tahoe and Expedition numbers are almost identical to their respective Cadillac and Lincoln cousins. And by just about every measure, all these full-size American SUVs will compete quite closely. On paper, it appears the Jeep’s third row will be about as roomy as the Ford’s, with both having a slight edge over the Chevy. Jeep also appears poised to claim the most available cargo space with all three rows of seats in use, but that advantage disappears when the third row drops.

Now, let’s talk about Grand Wagoneer. It should be noted that Jeep is taking a different approach to its full-size SUV than either Ford or GM. They offer extended-length versions (the Expedition XL and Navigator L; the Chevy Suburban, GMC Yukon XL and Cadillac Escalade ESV), whereas Jeep’s is one size fits all. The “grand” in Grand Wagoneer refers to its power, prestige and price tag, not any extra size.

That’s all we have for now. We expect to get our hands on the Wagoneer in a few months. Until then, happy spec racing.