Even if it’s not your cup of tea, you can’t deny that the new Toyota Sienna’s interior design is a stunning departure from the minivan norm. That it’s found in the Sienna, forever a conservative entry in the most conservative of segments, is all the more surprising. It’s as if Toyota’s designers stumbled upon a Previa in the company museum and found some inspiration. As we go over in our full 2021 Toyota Sienna review, it’s one of the key reasons to consider this all-new minivan.

The best thing about this new design is that it helps you forget you’re driving a minivan, a fact that can be a bit depressing for those who came to the ultimate family hauler segment kicking and screaming. The high-mounted touchscreen is angled toward the driver. The center console is also high and comparable in relation to the steering wheel as a car’s might be, with a traditional shifter instead of a rotary knob (Chrysler Pacifica) or weird button arrangement (Honda Odyssey).

Now, this newfound style and car-evoking design is all well and good for perception, but what about functionality? After all, the Sienna is still a minivan and 100% of buyers will be getting one because of its outsized functionality relative other vehicle types. Well, the answer is that not only does the new Sienna not betray a minivan’s end goal of practicality, it actually enhances it. Prepare for a deep dive. 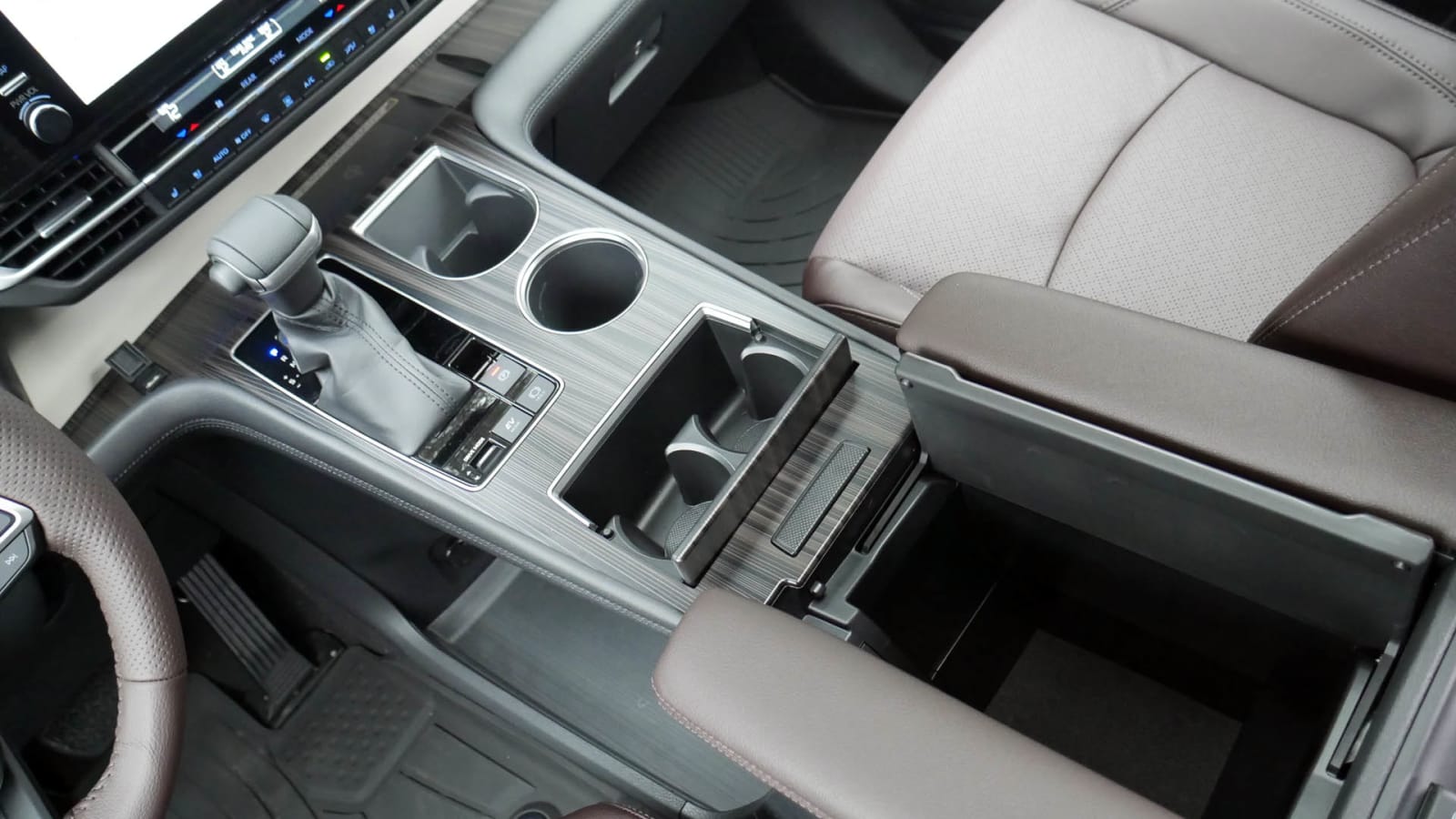 Let’s start with that center console. Traditionally, minivans had an open space in between the front footwells with some sort of storage area between the seats. The Kia Sedona was the first minivan to offer a more car- or SUV-like center console, but it did sacrifice that inter-well open space in the process. The Chrysler Pacifica (below right) tried to split the difference with a “floating” center console that has an open area below. The Sienna (below left) builds on that concept with a substantially larger and more useful area under the console. 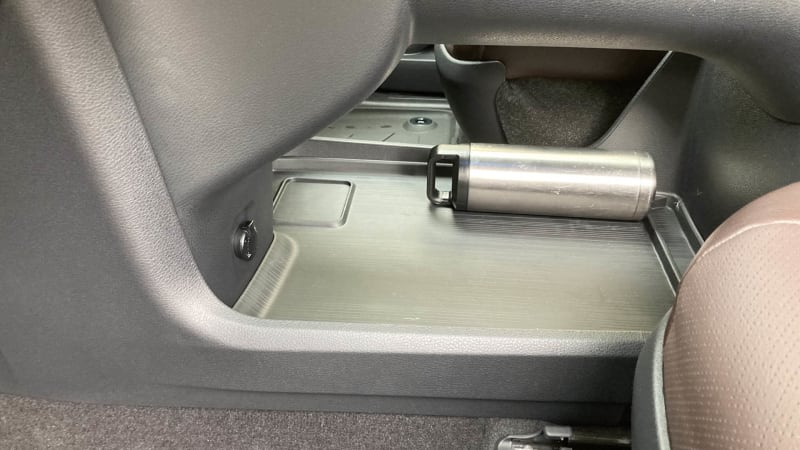 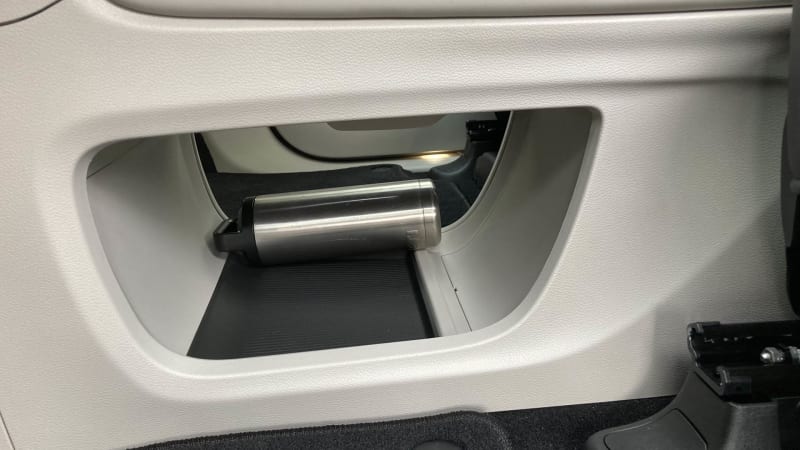 One of the appeals of this open space is the ability to accommodate a purse (my mother used to love the open footwell in her ’97 Honda CR-V for this very reason), and as you may know, a mom’s purse can get awfully big. In this case, bigger is definitely better.

The Sienna’s space is indeed big enough to store a purse, and as such, can keep it off the floor or a seat. I didn’t have a purse handy, but this Skip Hop diaper-changing clutch should be a decent fill in. 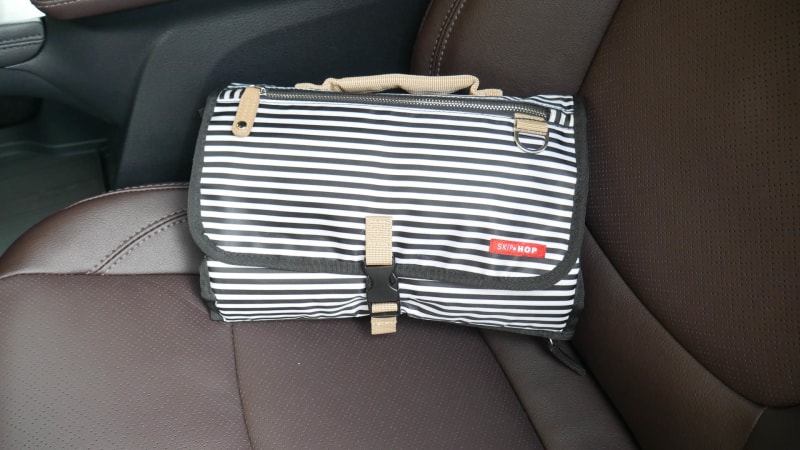 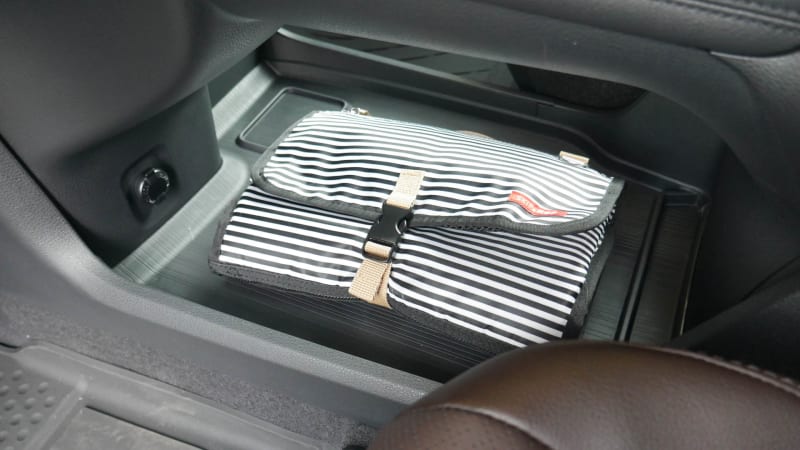 And since we have that bag handy, let’s use it to show how large of a space you get in the center console bin. 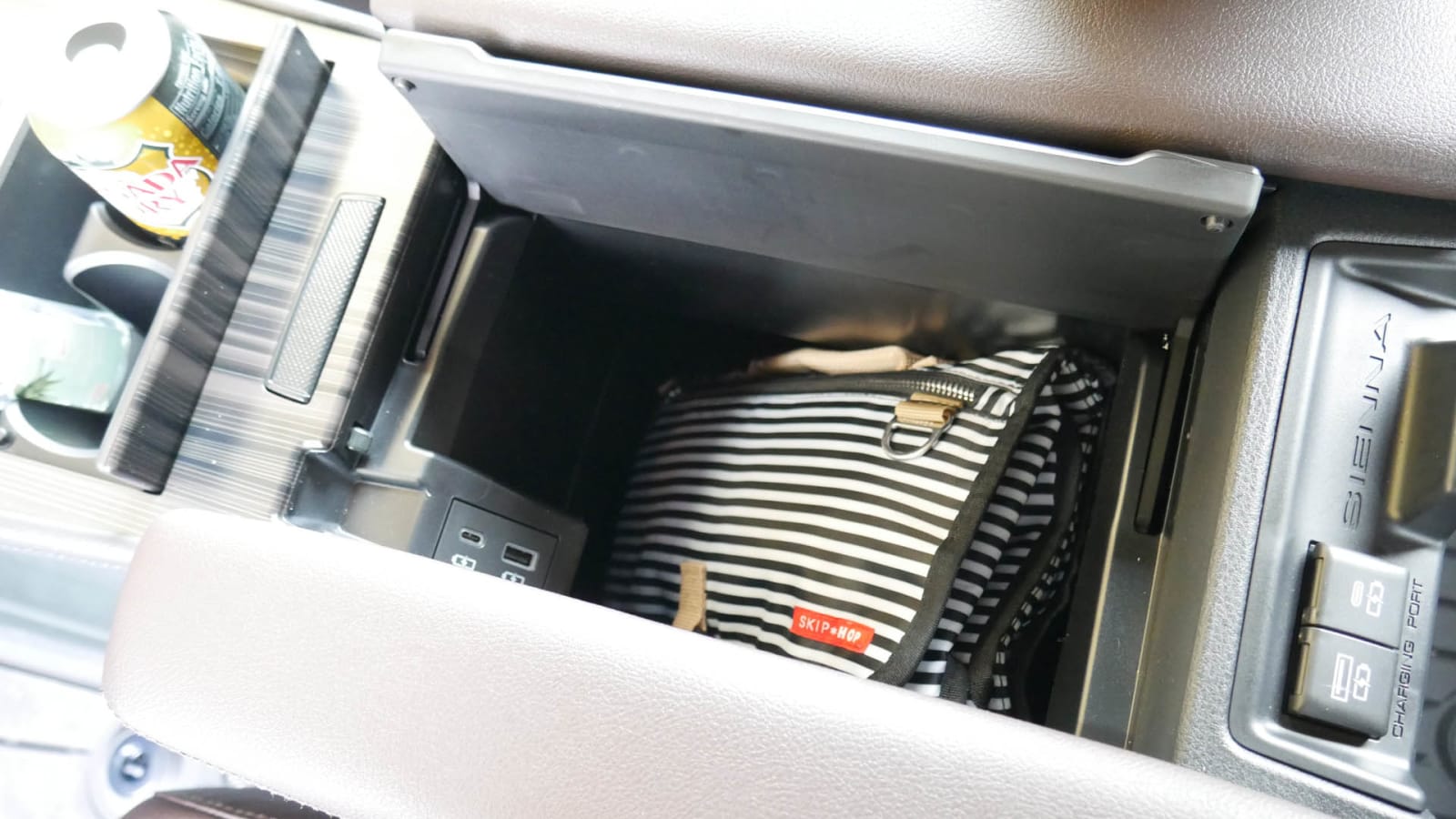 A smaller purse will therefore also fit in there, as did the Yeti bottle shown above.

OK, let’s move forward up the console and start dealing with cupholders. 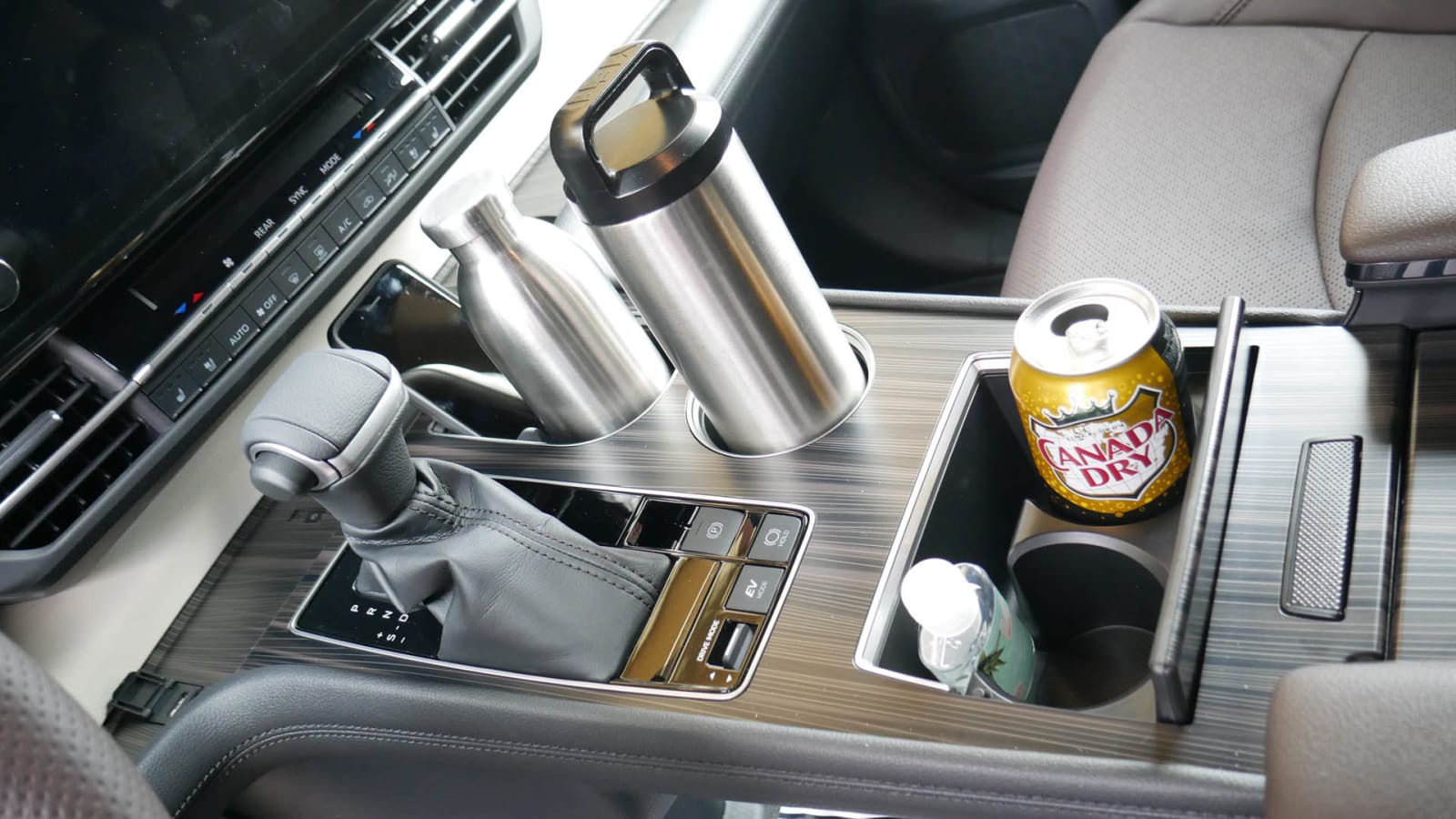 The Sienna has four cupholders in its center console. The two main ones are big enough to hold that Yeti, while the two smaller cupholders covered by a lid are good for a can or coffee cup. Each of these areas also has bonus storage. 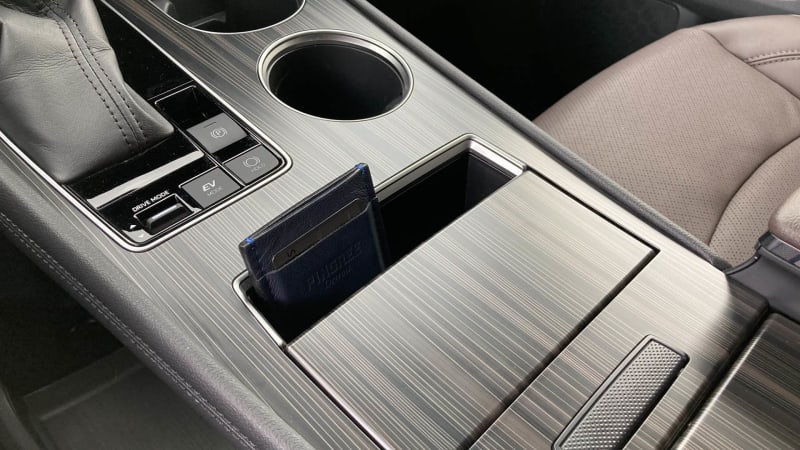 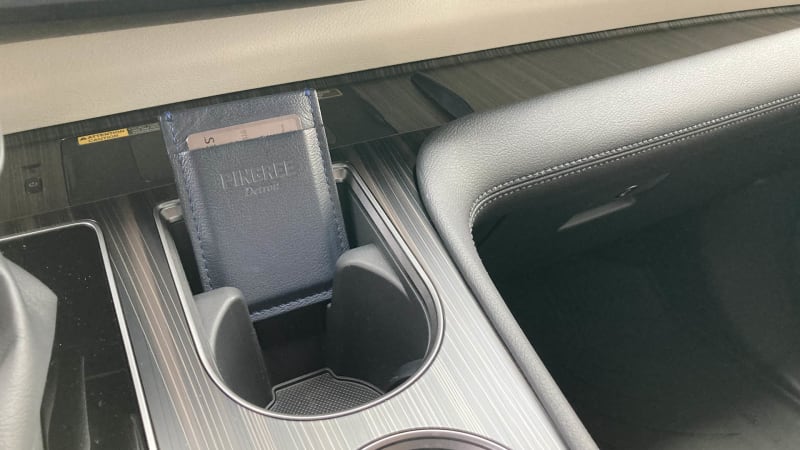 The bin lid leaves a skinny rectangular channel open so you can store things like wallets or hand sanitizer or a mask or whatever. I found it quite handy, especially since said items would usually end up in a cupholder. The forward one is probably suited for a smartphone, but not exclusively, especially considering what’s behind it … 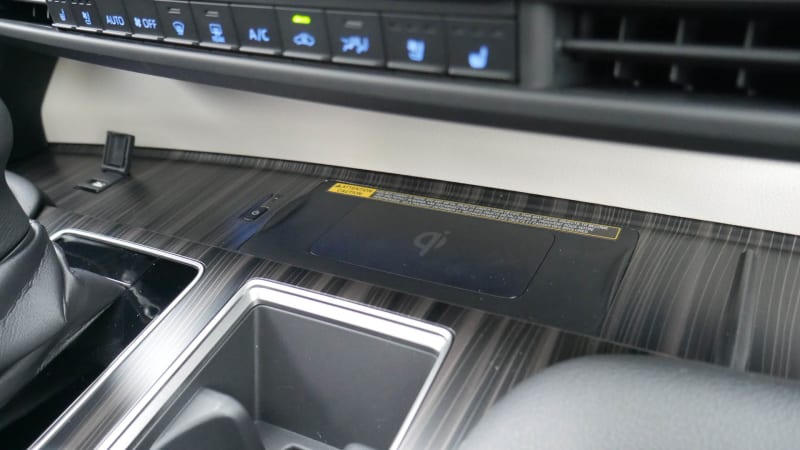 Borrowing a page from the last Highlander, the Sienna has a shelf that spans the dash from steering wheel to passenger door. It’s here where the available wireless charger resides, complete with little bumpers on each side. Unfortunately, the USB/media port is also up there, meaning that if you’re connecting your phone with a wire (necessary for Apple CarPlay and Android Auto), that wire is either snaking around that shelf or dangling down into the footwell area. I’d prefer one of the charge-only ports in the center console bin to be the media connection — especially since there are both USB-C and USB-A connectors in there. 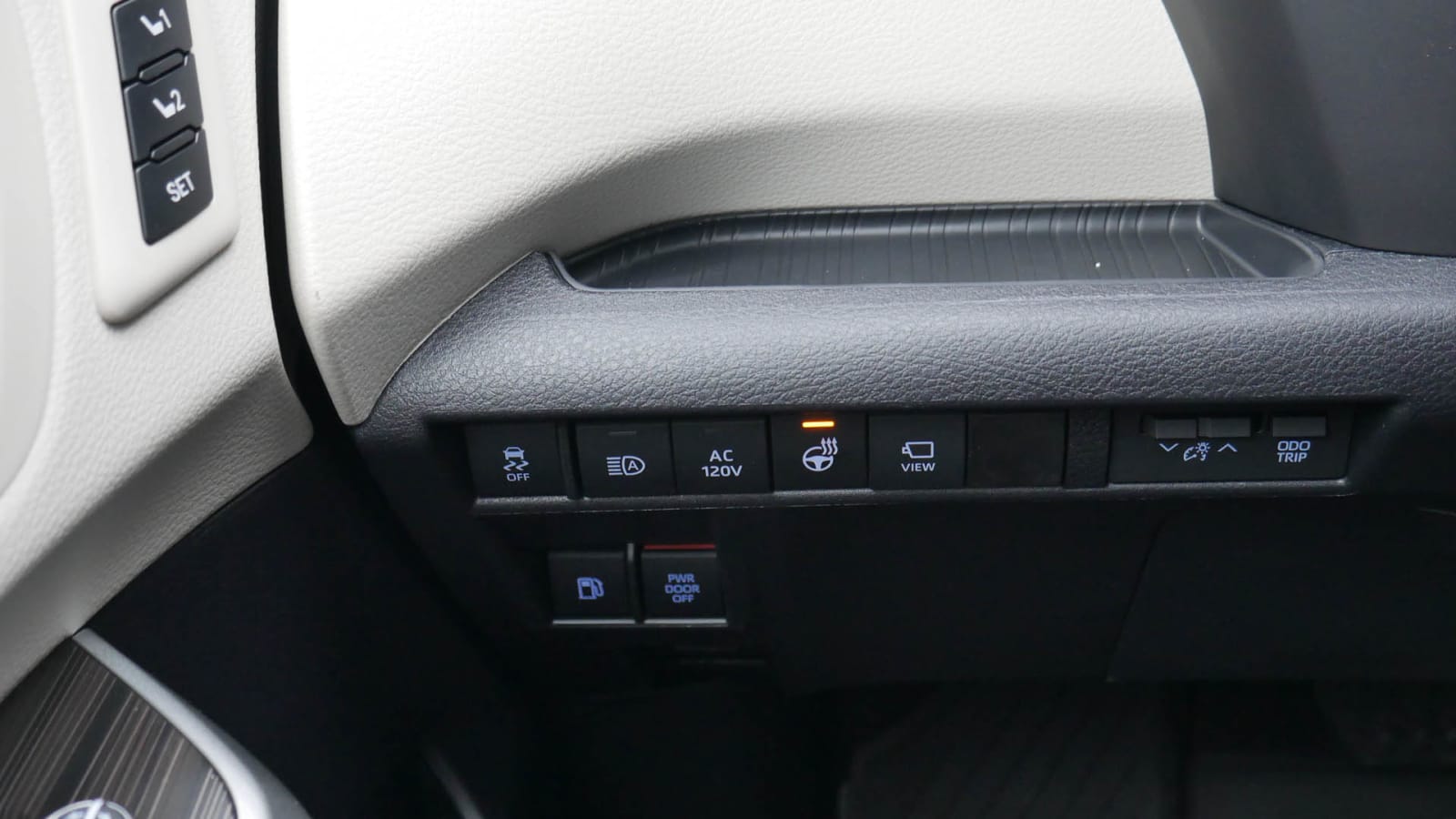 There is another little tray on the left side of the steering wheel, much like in the Toyota RAV4 interior. 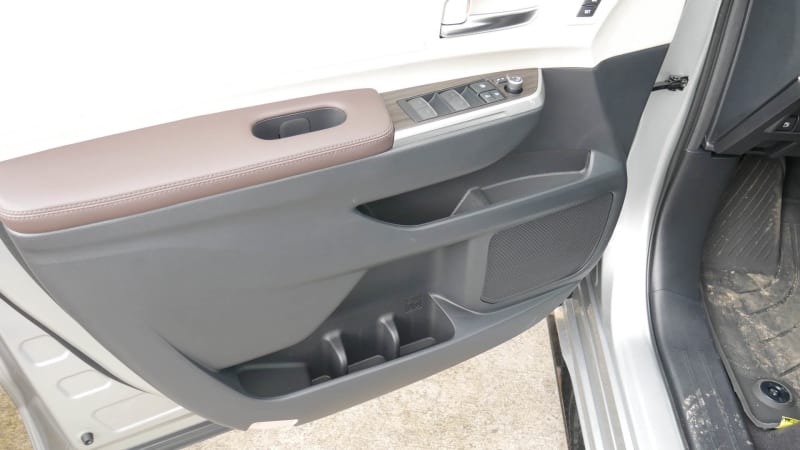 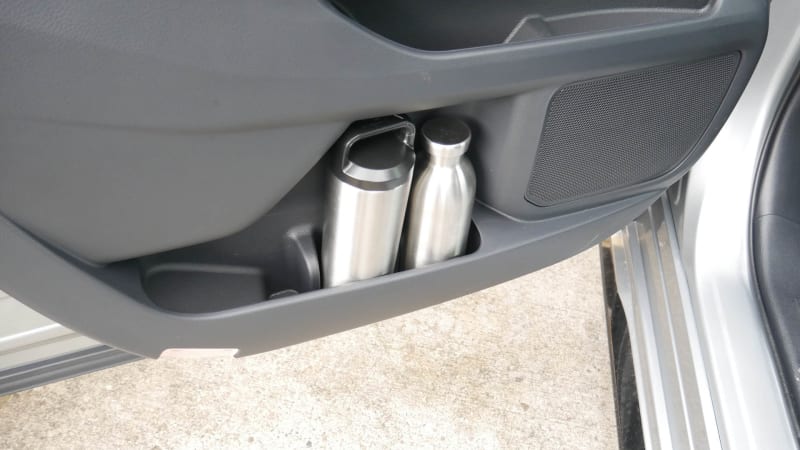 Here’s the front door. There is a little bin half-way up for whatever (more hand sanitizer?) and two bottle holders. It was a bit of a squeeze for the Yeti, but it’s also pretty tall and wide. Two could still fit in each door, meaning you could have six of those suckers in the front seating area alone. And two cups of coffee. Hope the route has bathrooms along the way.

Let’s move to the second row. 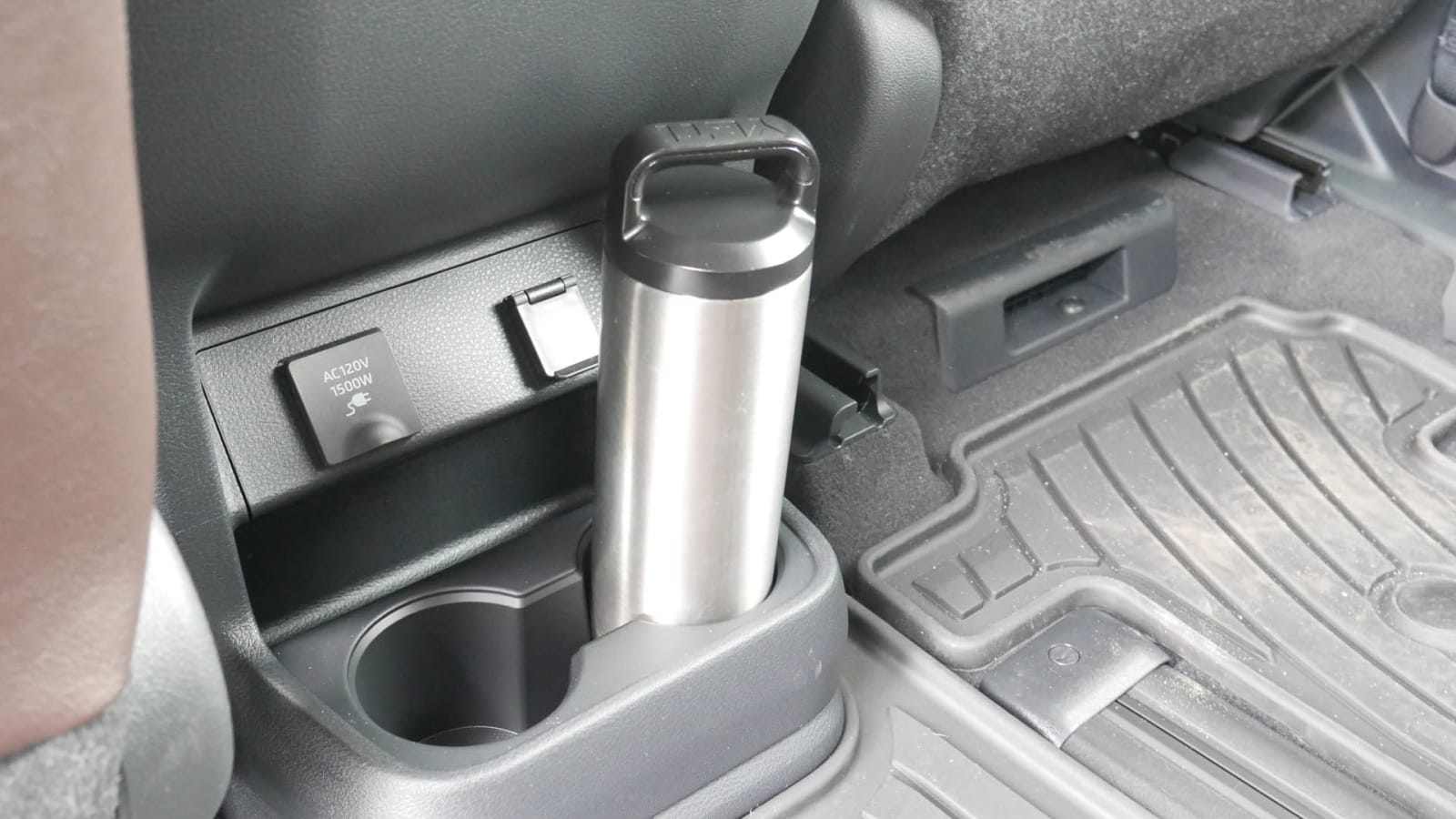 At the back of the center console is this plastic unit on the floor that, yep, can hold another two Yetis. There’s also a little tray forward of the two cupholders, plus one of the Sienna’s two house-style outlets (the other is in the cargo area) and an HDMI port. Two USB ports are above. 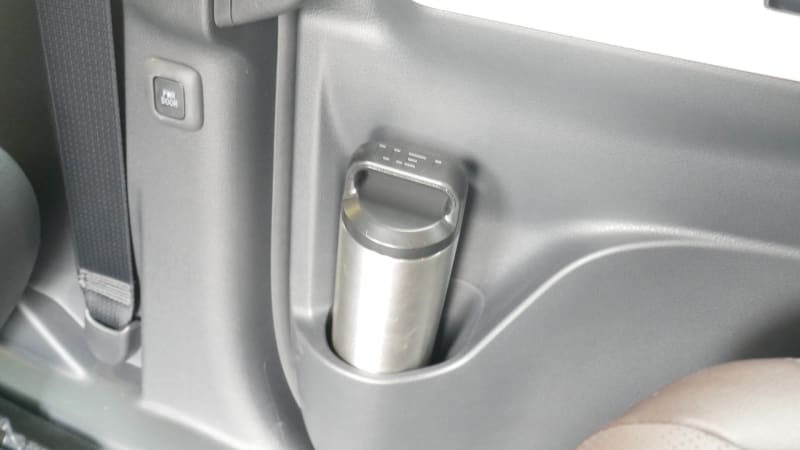 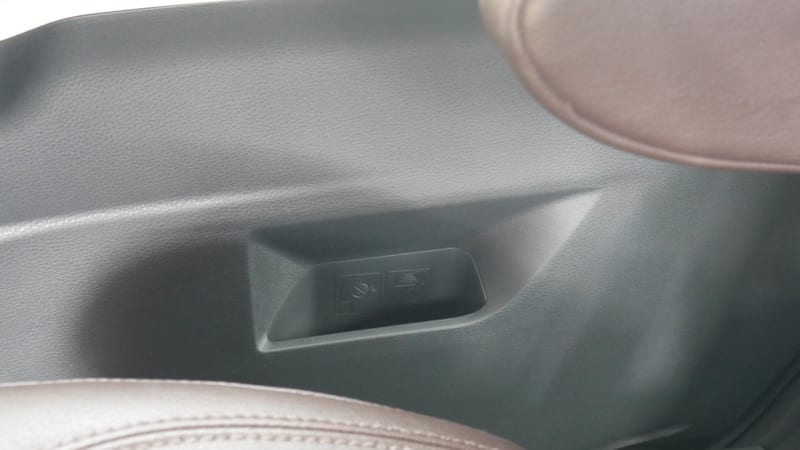 Each sliding door has another Yetiholder and this phone-ish-sized bin. 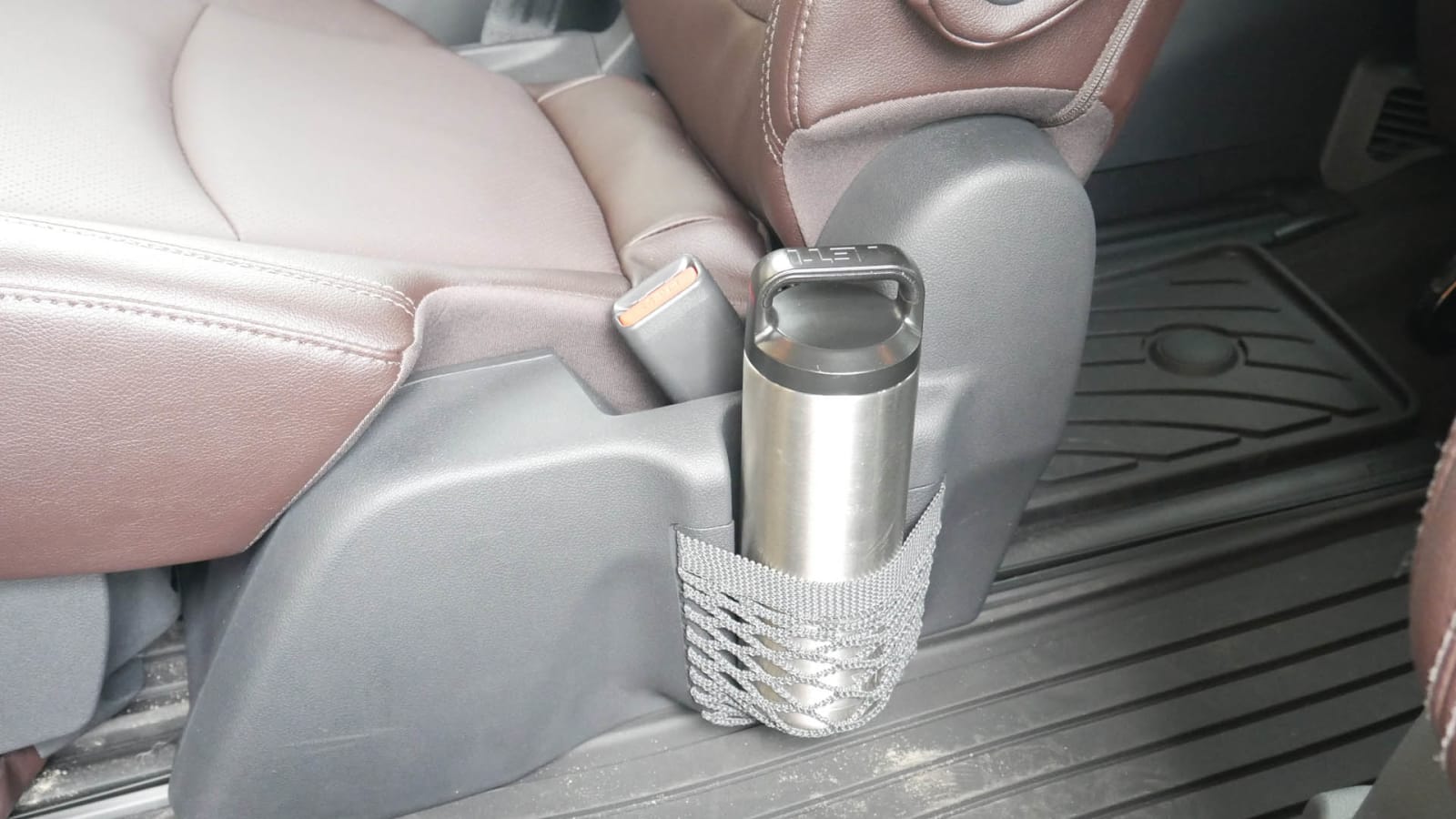 Each captain’s chair then has this net cup/bottle holder. At first glance, they might seem a tad janky, but once you use them and realize how much they can expand to hold a variety of bottle sizes (bring on that Nalgene bottle Mr. Snyder!), they can be appreciated as a refreshingly simple and effective solution. They don’t take up much space and aren’t some flip-down plastic piece that will inevitably break. I suppose the elastic might start to wear out after a while, so there’s that potential downside. 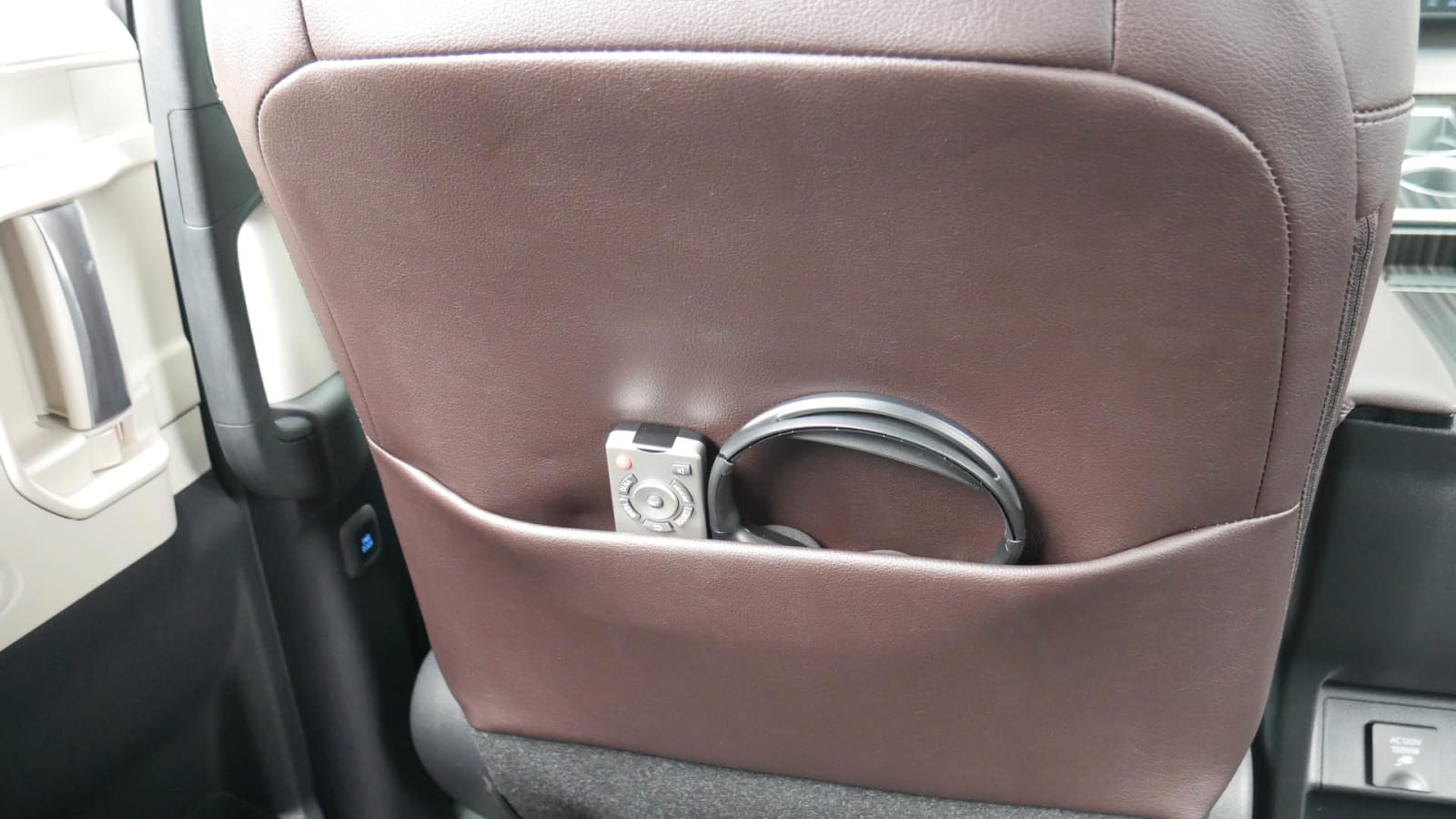 The Honda Odyssey and Chrysler Pacifica have multiple pockets built into the backs of the front seats for various items, including the entertainment system’s headphones and remotes. The Sienna just has a plain single map pocket design. A rare missed opportunity here in the Sienna. Oh, and by the way, the Sienna has a one-screen entertainment system. The Pacifica continues to reign supreme with its twin screens.

Let’s move to the caboose. 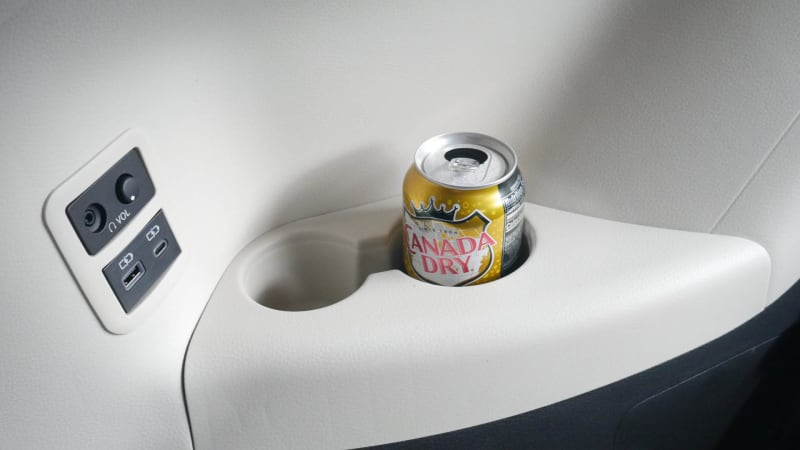 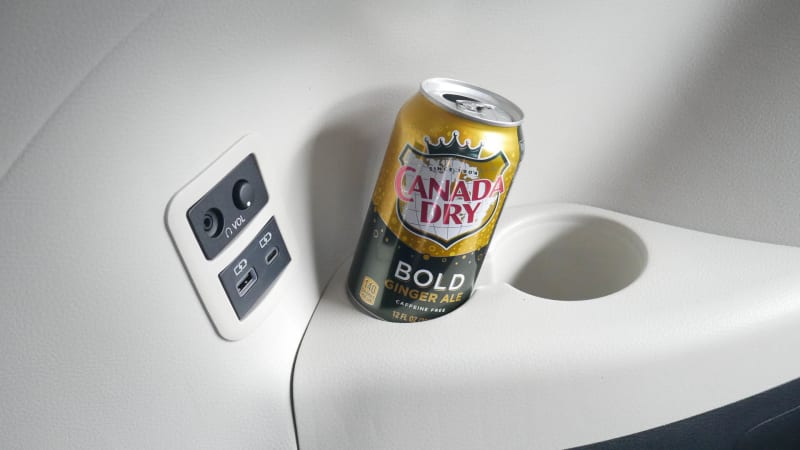 The third row is a no Yeti zone. Although there are four cupholders, none are big enough to store that water-storing artillery shell. Curiously, the size of the cupholders actually differs on each side.

Those on the right side have one that’s the size of a standard soda can (top left), but the other one is more Red Bull sized. 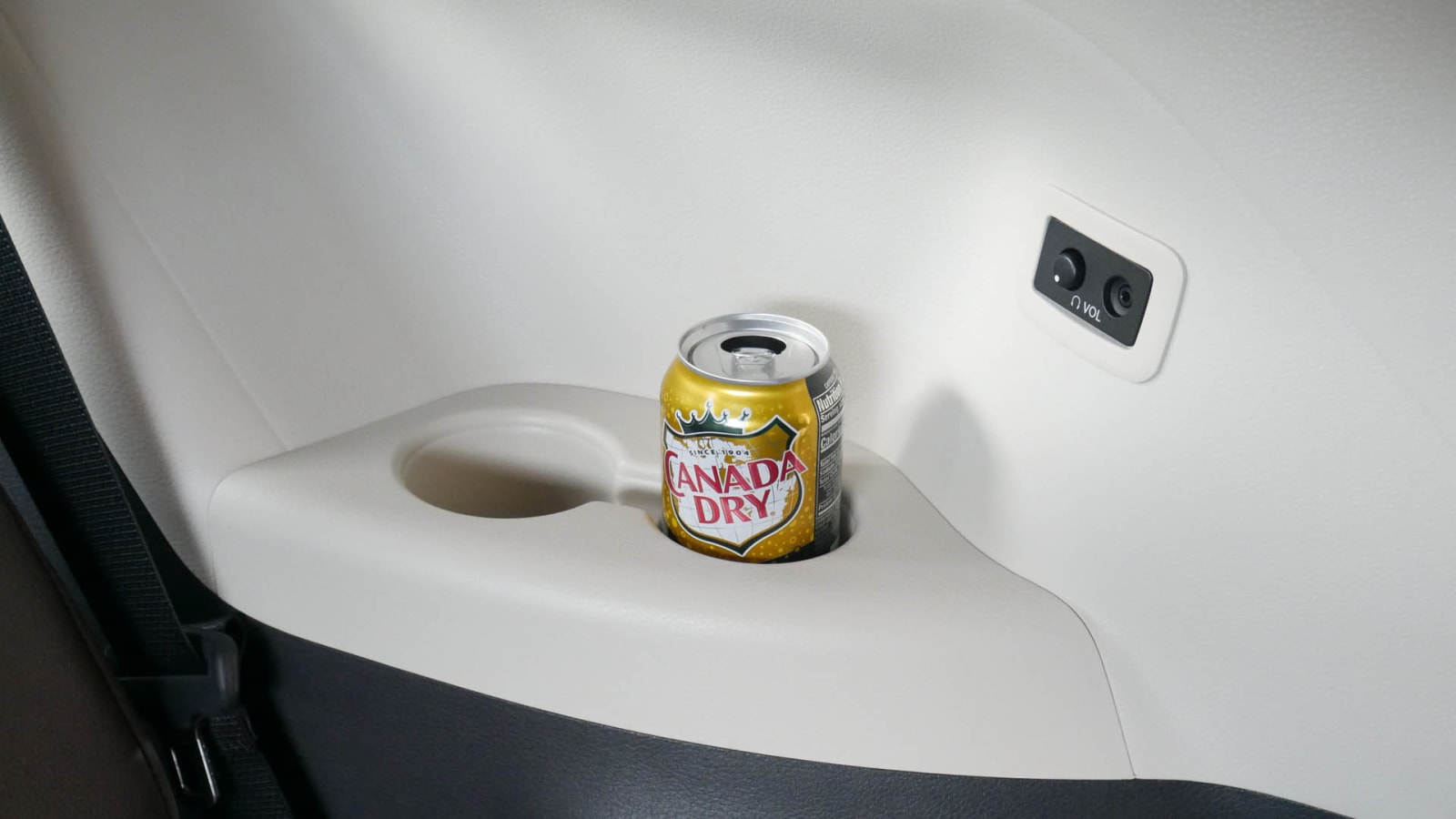 On the left side, though, both cupholders are the same size and capable of holding a regular soda can. Canada Dry Bold is delicious, by the way.

So fans, if you’re scoring at home, the 2021 Toyota Sienna has 18 cupholders. Twelve of those are big enough for a large water bottle, five are can-sized and one is for the caffeine-starved child in Row 3.

And finally, in the cargo area … 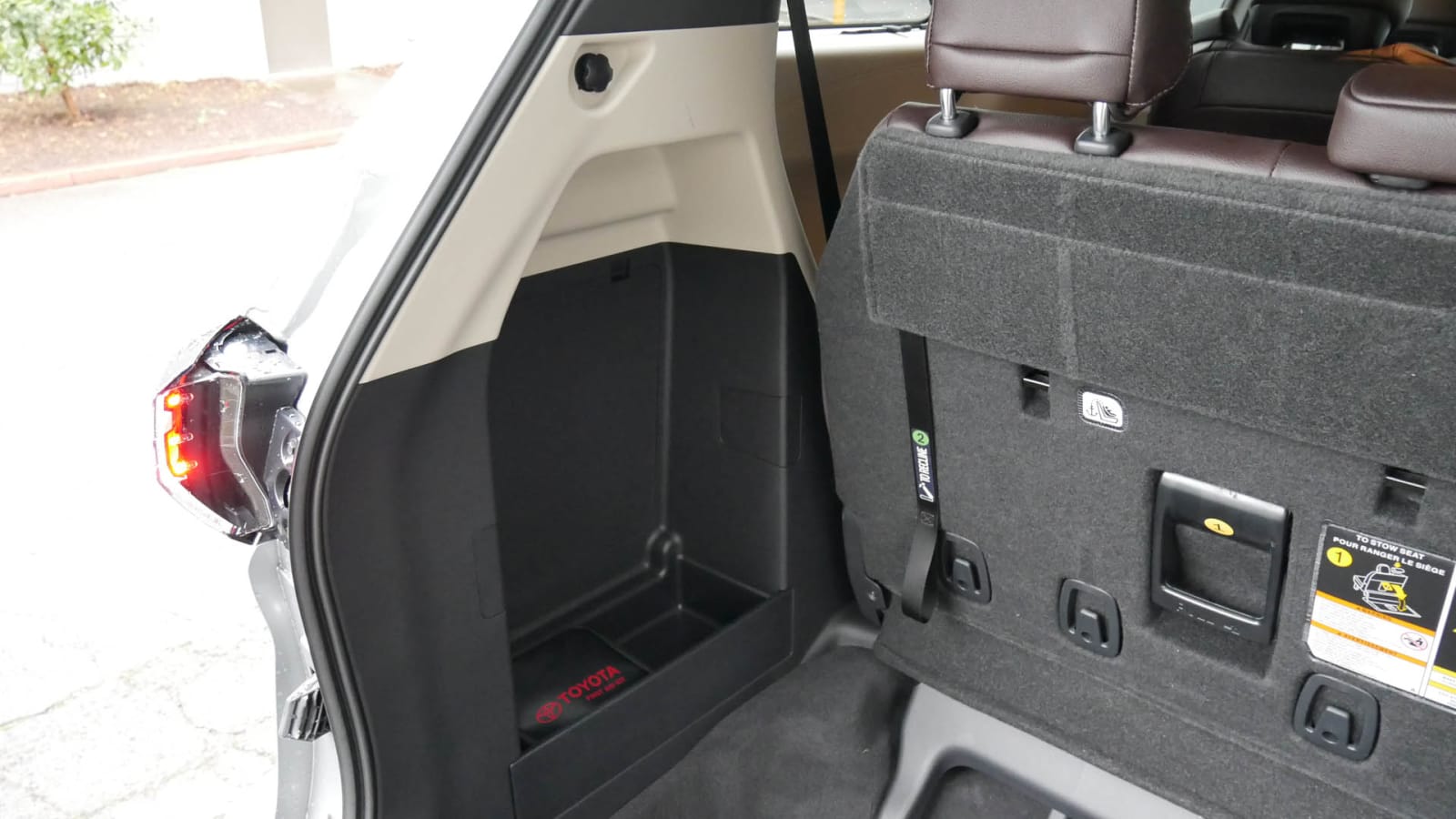 There are grocery bag hooks in the third-row seatbacks, plus there’s this large open area. This would be where the in-van vacuum is supposed to go, but that’s been delayed due to pandemic-related supplier shortages. So, despite this being a loaded $53,000(!) Sienna Platinum, the vacuum is missing. That sucks. Or, literally, it doesn’t.

So there you go. If that doesn’t satisfy your insatiable appetite for Toyota Sienna cupholder and bin content, I’m afraid nothing will.