2022 Hyundai Tucson makes U.S. debut with all the details and photos you want

The next-gen Hyundai Tucson has already been revealed in Korea, but only a few details were available at the time. We saw the wild new design, and were treated to some powertrain figures, but that’s about it. Now, Hyundai has given us Americans a full rundown with detailed photos inside and outside the new crossover. On top of that, we also got some decent shots of the upcoming N Line trim you can check out here.

To begin, take a gander through the gallery at the top of this post where you can see every final detail of this angled and geometric design. It’s still a funky look, but we’re starting to become accustomed to it. The interior photos have us even more intrigued, though, as this is where Hyundai was stingy on photos and details previously. Hyundai blended the vented plateaus on the dash perfectly into the doors, and it looks spectacularly classy. The wide vent outlets will blow diffused air out to passengers, treating folks to less abrasive airflow.

Technology takes center stage inside. An optional 10.25-inch touchscreen sits in the center stack in the model pictured — the standard Tucson has an eight-inch touchscreen. However, both run wireless Apple CarPlay and wireless Android Auto. Hyundai has also planted a hoodless gauge cluster right behind the steering wheel, and it looks rather futuristic. Glare is always a worry with such a design, so we’ll have to wait on the verdict there. Regardless, the graphics look slick, and it punches above its weight for the segment and price. 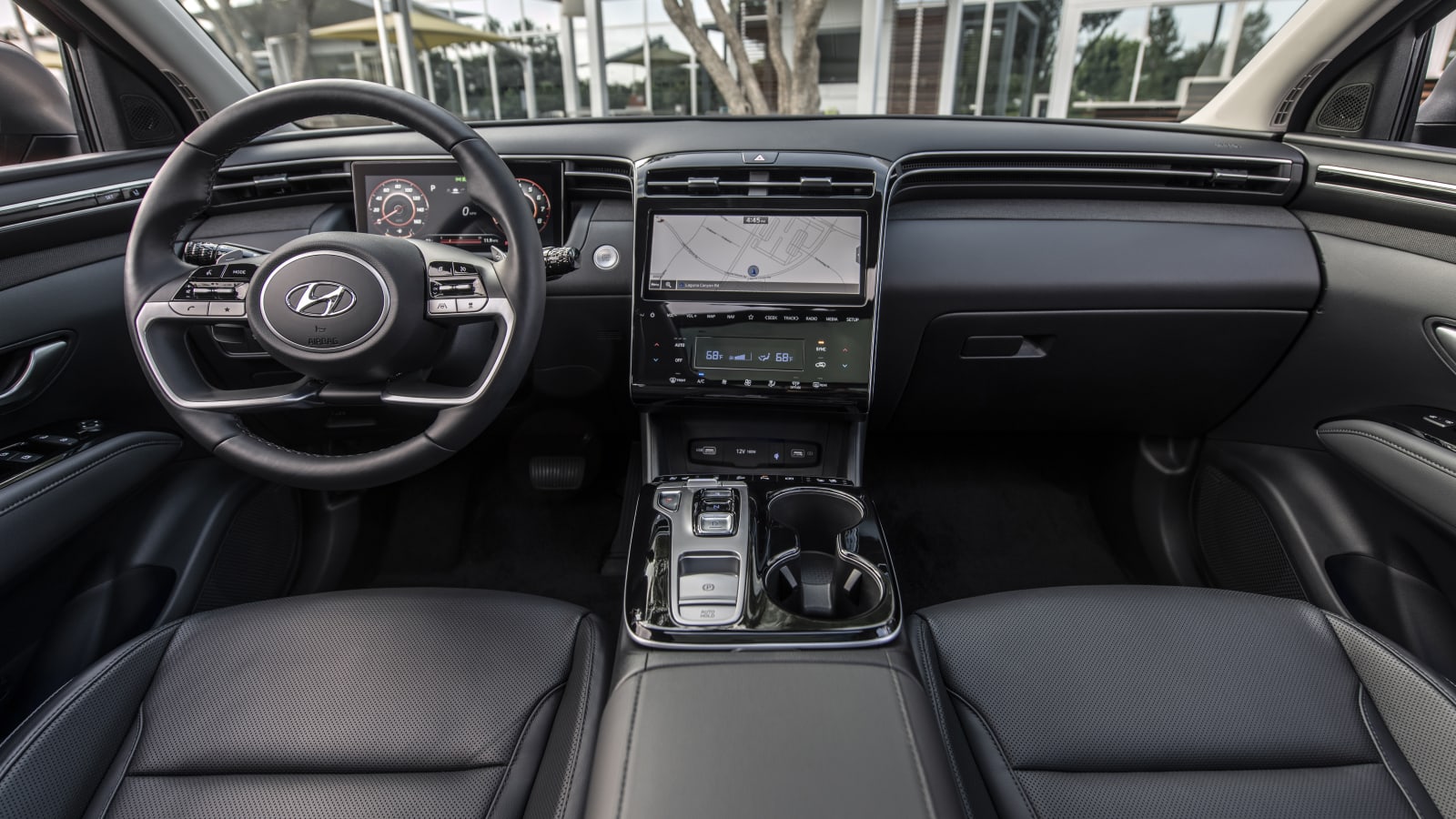 Similar to the Palisade, you get a push-button shifter on the center console. There aren’t any buttons for the climate controls, though. Instead, it’s all touch haptic feedback controls. We’ve found similar controls to be endlessly frustrating to operate in other cars. Let’s hope Hyundai’s implementation here is improved, because we do like the look of the flush center console slab.

As for interior functionality, Hyundai says the U.S. is only getting the long-wheelbase version of the Tucson here (other markets get a shorter car). Cargo volume goes up by 7.7 cubic feet this year, making it much more competitive with RAV4 and CR-V. It’s a bigger car than before, measuring 6.1 inches longer overall.

Three different powertrains will be available. The standard engine is a 2.5-liter four-cylinder that makes 187 horsepower and 178 pound-feet of torque. Hyundai says that’s going to return 28 mpg combined, a three mpg improvement over the 2.4-liter offered in the current Tucson. Shifting is handled by an eight-speed automatic that Hyundai says adds ratio range at the bottom (for extra thrust off the line) and top (better highway fuel economy). All-wheel drive is optional, and Hyundai says that Sport mode is capable of sending more torque to the rear wheels, though Hyundai doesn’t specify how much more.

Hyundai has also received the memo from Toyota that its hybrid models should be fun, quick and efficient. The standard Hybrid model has a 1.6-liter turbocharged four-cylinder engine and single electric motor that combine for 226 horsepower and 258 pound-feet of torque. Shifting is handled by a six-speed automatic. It will undoubtedly be much quicker than the non-hybrid Tucson. Hyundai also says it offers 30 percent better fuel efficiency than the standard gas engine. That’d put it around 36-37 mpg combined. That underperforms versus the RAV4 Hybrid and Escape Hybrid, and just misses the CR-V Hybrid, too. We’ll circle back around to this when proper EPA numbers come out, but it looks like the added power does come with a slight hit in fuel economy. 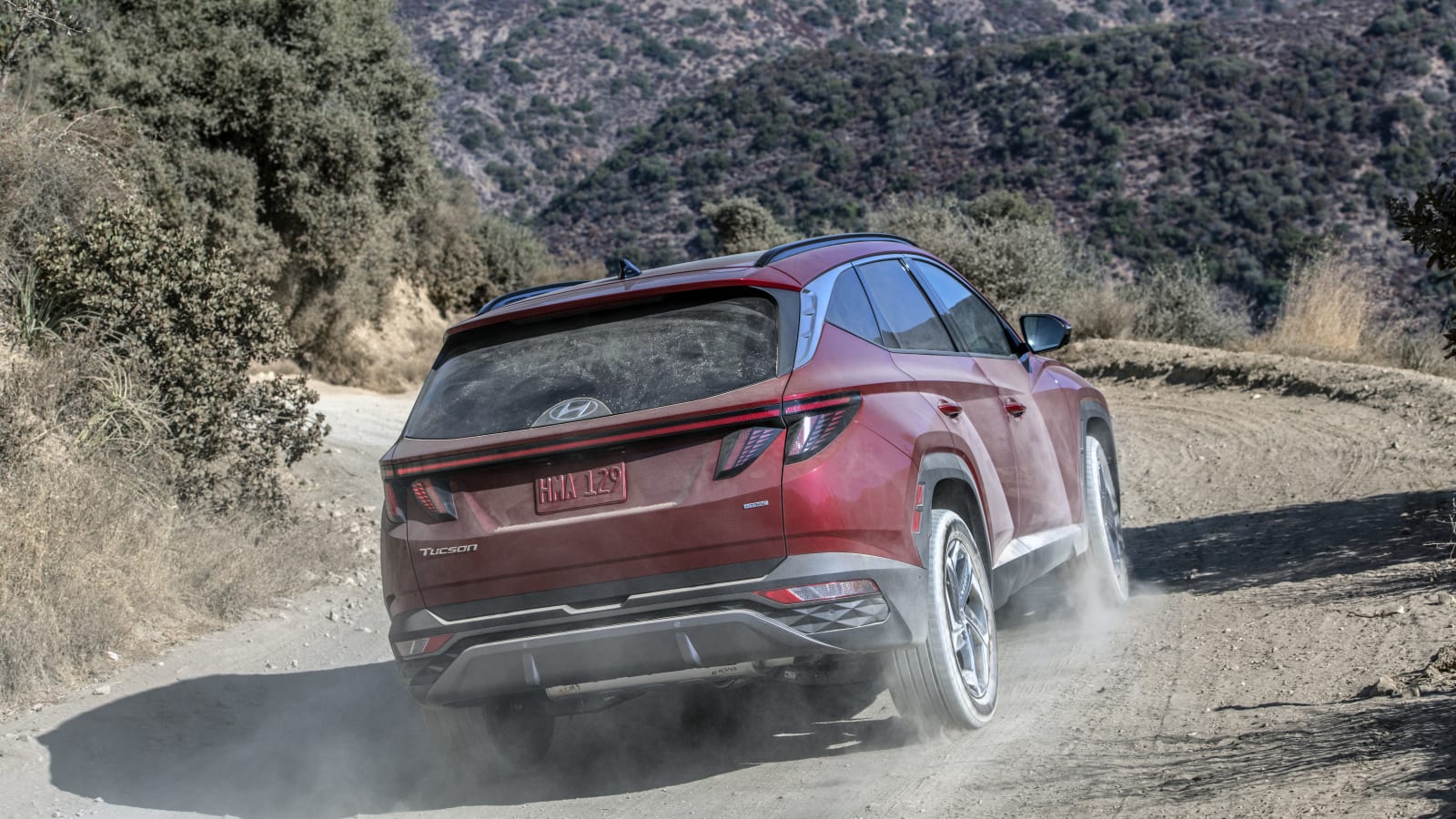 A plug-in hybrid model will also be available with the same 1.6-turbo and PHEV-tuned six-speed auto, but Hyundai hasn’t revealed power figures for this model yet. It’s packing a 13.8 kWh battery pack that Hyundai claims will be good for approximately 28 miles of all-electric range. Estimated MPGe is sitting at 70 MPGe now, way low compared to the RAV4 Prime’s 94 MPGe. Toyota’s PHEV also takes the cake with its 42-mile electric range. Both the hybrid and plug-in hybrid models will come standard with all-wheel drive.

We haven’t driven the Tucson yet, but Hyundai is already bragging about its improved handling characteristics. Specifically, hybrid models will have what Hyundai is calling e-Handling technology that “precisely applies electric motor torque control according to dynamic inputs and road conditions to improve cornering performance.” Hyundai says the electric motor system applies incremental braking force to the front wheels for better steering response on initial turn-in. Then on corner exit, the electric motor applies torque to the rear axle for better traction and acceleration. It sounds like a quasi torque vectoring system that isn’t quite full-on torque vectoring. We’re excited to see how it compares to the RAV4 Hybrid’s shockingly good driving dynamics.

Tucsons will be available with Hyundai’s latest technology advancements like the Digital Key and Smaht Pahk. A huge suite of driver assistance features are standard, and many more are optional, including the blind-spot tech that won Autoblog’s Technology of the Year award.

Look out for the Tucson to land here in spring 2021 with gas-only and hybrid models coming first. The PHEV will be arriving months after in summer 2021.