Tiger Woods crash: Detectives determine the cause but won't reveal it

Enter here to win the 2021 Ram TRX, the fastest pickup on the market

The full debut of the Hyundai pickup is just around the corner, but today we’re getting a revealing preview of what’s coming. It’s called the 2022 Hyundai Santa Cruz, just as we’ve been expecting.

Four shadowy but decent photos are being shown today alongside a few undefined details. We can see that it’s quite obviously a small truck with a short bed and what looks like a roomy cabin. Just like the Honda Ridgeline, the Santa Cruz will be built on a unibody platform, but based on its size, it looks like more of a compact Ford Maverick competitor than a mid-size truck.

And before we type “truck” again, know that Hyundai is not calling it one. Instead, Hyundai is naming it a “Sport Adventure Vehicle,” which speaks to this vehicle’s purpose more than what it is. Make no mistake, this vehicle with a bed is most definitely still a pickup. Seeing the length of the bed, shape of the cab and car-inspired grille puts it in a gray area between tool and adventure-mobile, though. 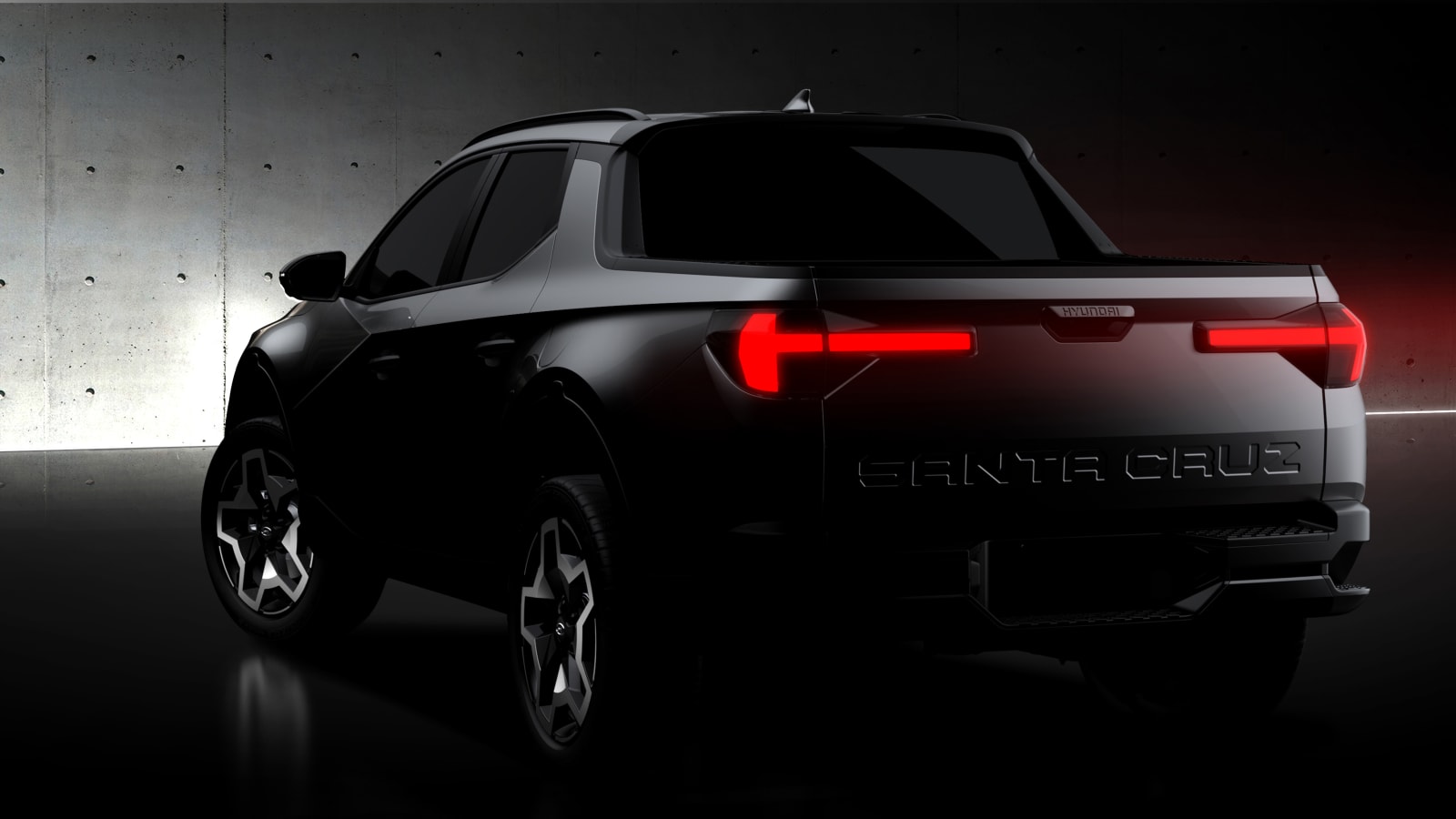 You don’t have to look too far away in the Hyundai lineup to see where the grille comes from. It’s a derivative of the new Tucson’s and Elantra’s face, only made taller and bolder. The same exotic front running light scheme is used here again, and we can see the actual headlights mounted much lower in the front bumper. The body lines are muscular to the max with an especially strong Y-shaped crease pattern extending from the hood and front fenders into the door and down the side. Its windshield is crossover-like with its rake, unlike most trucks with more vertically-oriented windshields. The cab meets the bed from a diagonal angle. Out back, the tailgate has “Santa Cruz” stamped in it and features the Hyundai text on the handle. Strong, T-shaped horizontal taillights complete the lighting picture. One neat feature we can already make out are the bed steps incorporated into the rear bumper to reach items inside the bed.

Hyundai says the Santa Cruz will have a “flexible bed for gear, cutting-edge connectivity and a highly maneuverable all-wheel-drive platform.” It’s going to be suitable for “adventure-focused environments,” so we’ll be expecting a little more than your average crossover’s all-wheel-drive system. Additionally, Hyundai promises “powerful and efficient engines,” guaranteeing that there will be more than one engine option.

Beyond that, we’ll have to wait for the truck’s reveal on April 15 this year. Hyundai says the Santa Cruz will go into production this summer at its Montgomery, Alabama plant.