The 2022 GMC Sierra 1500 is getting Super Cruise! Exclamation point required, because this is exciting news. Cadillac has been the sole owner of Super Cruise at GM from the start, and though we knew it was coming to the Hummer EV, we didn’t know a fast-selling full-size pickup would be getting the technology.

GMC says it will launch Super Cruise on the 1500 Denali, which is the most expensive and luxurious trim of the Sierra. It’s scheduled to arrive for the 2022 model year, but GMC qualifies that by saying “late model year 2022.” That means it’s probably coming right toward the end, with 2023 scheduled as the first full year of Super Cruise in the Sierra 1500.

GM also claims that the version of Super Cruise coming to the Sierra is capable of towing. Yes, hands-free towing, folks. We’re a little antsy, too. The tech is the same as the newest generation of Super Cruise coming in the Cadillac CT5 and CT4. It’s an improved version with more capability than the first-gen system that won Autoblog’s Technology of the Year award a couple of years ago.

Questions still remain to be answered, though. GM hasn’t said anything about what it will cost on the Sierra 1500. We’re also left in the dark when it comes to other Sierra 1500 trim levels; and what about the Silverado 1500? It makes sense that GM would give the Sierra Super Cruise first, but it’s certainly compatible with the Chevy version of the truck now, too. As for other GMC products, GM is quiet on when they’ll be blessed with Super Cruise. The redesigned Yukon would be the most obvious candidate being the flagship product, but GM says the program timing worked out best to launch on the 2022 Sierra, not the Yukon. It’s likely that the SUV will be updated with the system in the near future.

Besides Super Cruise, GMC’s photo also reveals that the 2022 Sierra is getting a fully digital instrument cluster. It’s surely an optional item, but could very well be standard on Denali. GM has flipped the speedometer and tachometer to opposite sides, but their digital versions still have that straight-edged GMC look to them. You can see the Super Cruise graphic in the center, and all the gauges are dropped down to the bottom of the display.

But wait, there’s more. The photo also shows the beginnings of a totally new interior design, different from both the current Sierra, standard Yukon and Yukon Denali interiors. It’s immediately and obviously different everywhere we look. The air vents directly to the right of the steering wheel are new and horizontal where they were previously vertical. These look similar in design to the Yukon Denali, but the push-button shifter is nowhere to be seen — it’s likely still a big stalk on the column. Instead, we can see a volume knob and the beginnings of a touchscreen. And if the screen is starting there, it’s likely a big one. GM has gone so far as to restyle the hood over the instrument cluster, too. Just like the rest of the surrounding areas, it looks nothing like the current Sierra. We’ve put one next to the other below. Scour away. 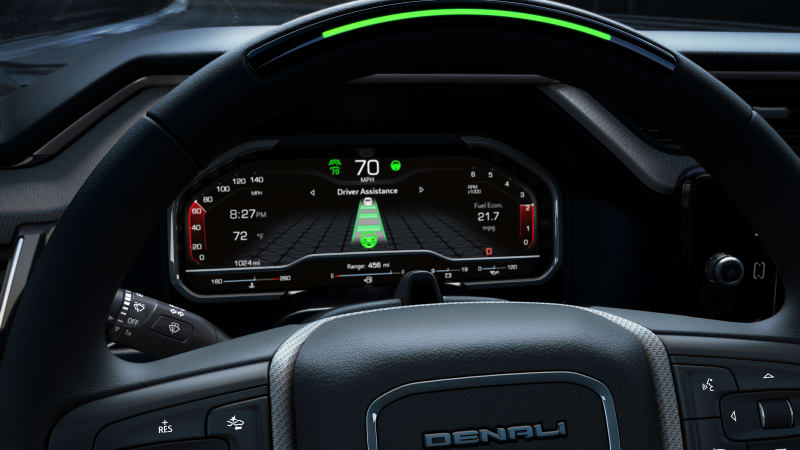 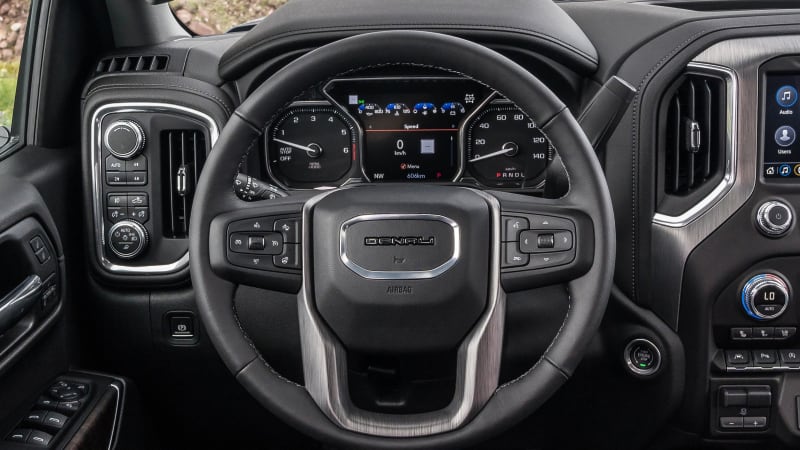