The much-anticipated battery-powered 2022 Ford F-150 Lightning pickup has finally made its debut, a moment that feels like a sea change in the U.S. auto industry. The F-Series pickup has for years been America’s bestselling passenger vehicle, and Ford’s decision to offer it as an electric vehicle sends the message with a bullhorn: The EV’s moment is upon us.

Now that the truck has been unveiled — officially, that is; we saw it demurely hanging out in the background during President Joe Biden’s speech yesterday pushing his plan for EVs in America — we can get a sense of how Ford’s big pickup will work as an EV.

The truck will come in a single body configuration: SuperCrew four-door with a 5.5-foot bed (the F-150‘s most popular configuration). The three Lightning trim levels are also from the heart of the lineup: XLT, Lariat, and Platinum — although there’s also “a commercial-oriented entry model.”

Ford will offer standard-range and extended-range battery packs, with the extended-range pack optional on the two lower trims and included on the Platinum. The truck comes standard with a dual-motor powertrain and four-wheel drive. The standard-range version makes 426 horsepower, while the extended-range model boasts 563 hp; both have 775 pound-feet of torque. For the larger-battery version, Ford estimates a 0–60 time in the mid-4-second range.

Ford is estimating 230 miles of range for the base battery pack and 300 miles for the extended-range version (although it appears the Platinum trim will come in slightly lower). There are multiple options for recharging, as outlined below: 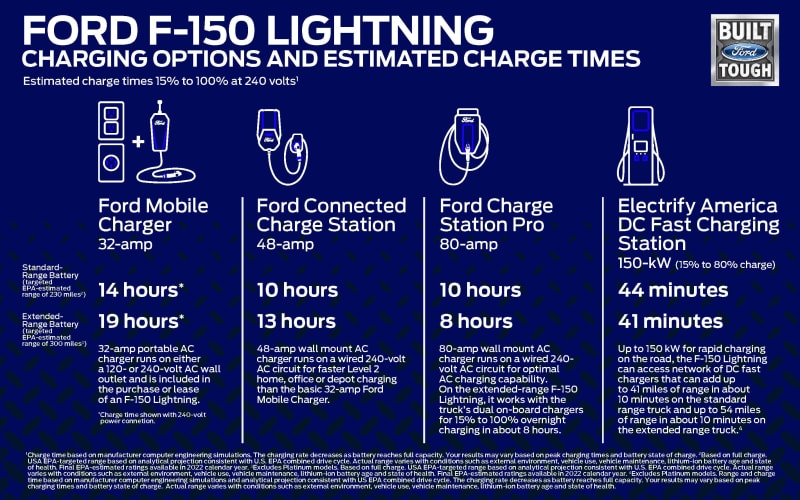 Ford is partnering with Sunrun for in-home charger installations, while on the road, Ford is part of the EV America network.

Ford heavily emphasizes the electric pickup’s utility as a power source, which could be a key aspect of its appeal for those who might not be swayed by the green argument. The base truck will offer 2.4 kW of output available via eight 120-volt AC outlets sprinkled throughout the cab, bed, and front trunk. Upper trims (and the XLT, optionally) can crank out 9.6 kilowatts of power and adds two more 120-volt outlets plus a 240-volt outlet in the bed. Ford boasts that a connected truck with the 9.6-kilowatt system, working through the 80-amp Ford Charge Station Pro and home-integration system, can supply an average house for three days during a power outage. And it would do so automatically, with the system switching back to charging once grid power is restored.

Ford says the Lightning rides on a new frame, and the chassis ditches the standard F-150’s live rear axle for an independent suspension. Exterior dimensions are not much different than the current truck, though, with the wheelbase 0.1-inch longer, overall length greater by 1 inch, width up by 0.1 inch, and cab height taller by 1.7 inches. Interior space is unchanged. Ground clearance at 8.9 inches is half-an-inch less than the standard 4×4.

The Lightning will offer a 12-inch digital instrument cluster, and upper trims get a 15.5-inch touchscreen running Ford’s latest SYNC 4A operating system. Ford’s BlueCruise hands-free highway-driving feature will be offered, part of a Co-Pilot360 option package. A new Pro Trailer Hitch Assist automatically steers, brakes, and accelerates when hitching up a trailer. A phone-as-key feature also makes its first F-150 appearance here. The F-150’s recently introduced onboard-scale feature, which can measure the weight of items in the truck bed, gets an EV twist here, as the truck can adjust the predicted range based on the weight of the current payload. Ford also promises the ability to provide over-the-air software updates (as on the current Mustang Mach-E).

Prices start at $52,974 for the XLT — you can find the trim breakdown here — with the commercial model (details and specs of which are still to come) at $39,974, and that’s before federal and any state tax credits. Ford says the Lightning effectively will be at cost parity with comparably equipped gasoline models. Here’s how you can reserve one.

Production is set to start at Ford’s Rouge River complex in Spring 2022. But Ford is happy to take some of your money now: a $100 deposit reserves your very own F-150 Lightning.