The updated Ford Expedition has been spotted on public roads again. This time, we have spy photos that show off its new, tech-centric interior with limited coverings. They confirm several details about Ford’s refreshed people hauler expected to bow in time for the 2022 model year and take the fight to GM’s redesigned Chevrolet Tahoe and Suburban.

While the exterior camo indicates that we can expect some updated styling elements for the 2022 Expedition, the real news here is the interior. While previous photos gave us some hints as to what Ford has in store, this is our first good look at that huge, vertical infotainment screen sitting front-and-center on the Expedition’s dash.

Photos we saw previously have hinted at this update, but given the somewhat cobbled-together nature of early road-going prototypes, we weren’t entirely certain whether we were seeing a built-in fixture of the redesigned cabin, or merely some sort of diagnostic/testing equipment being used strictly for development purposes. This time, it’s quite clear that we’re looking at a new design that draws heavily from Ford’s Mustang Mach-E electric car. 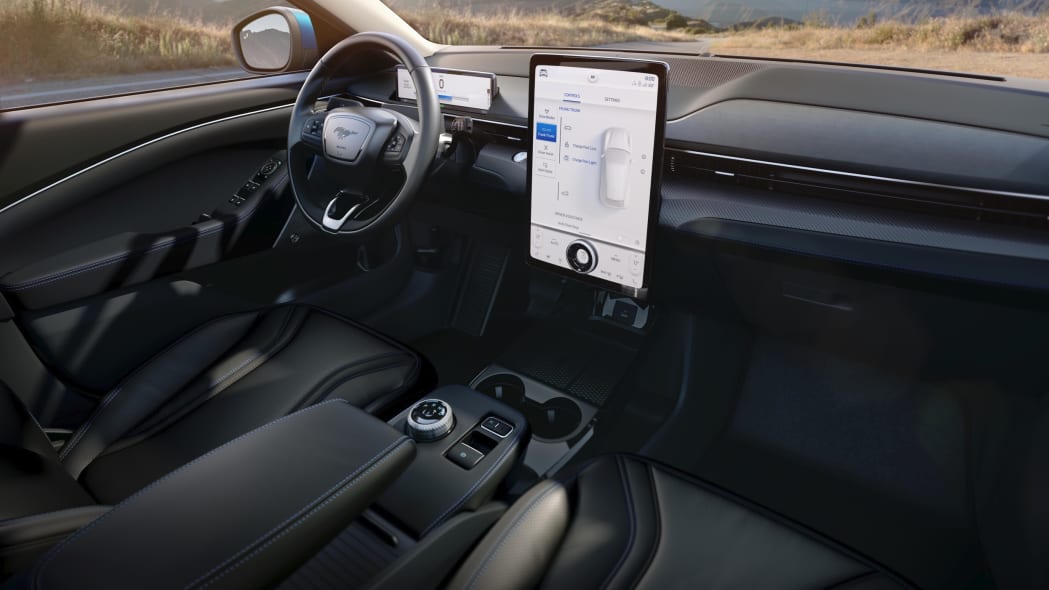 As you can see, the Expedition will pretty much directly lift the Mach-E’s central screen (above left), which boasts a far larger, more dominant infotainment screen than anything found in current Fords, such as the Explorer pictured here (above right). The rest of the dash is more of a departure from the Mach-E, with the center sections coming out to meet the screen, rather than the screen floating in front of it. There’s a thick center console that joins with the center stack, too.

Just as importantly, this also signals a shift in Ford’s interior planning for the Expedition, which has traditionally taken its front-seat area almost entirely from the Ford F-150. No longer. This configuration is a major departure from the cabin photos we’ve seen of Ford’s redesigned pickup, due out later this year.

Ford obviously has plenty of work left to do on this interior, as even some of the fitted panels are missing or unfinished. For instance, the note on the dash topper indicating that has not yet been grained/textured, meaning the surface treatment is not what we can expect from the finished part.