BMW revealed the iX electric crossover to us late last year, but it was only a partial reveal. We got to see the EV from every angle, mull over some preliminary specs and look at some of the tech features. Today, we get to learn about the iX’s final production specs and countless other details.

We’ll start with the important, final power figures. The iX is launching in xDrive50 spec only in the U.S., giving it standard all-wheel drive. Output is 516 horsepower and 564 pound-feet of torque combined from its two electric motors. Its rear motor is stronger than the front, maxing out at 335 horses, while the front motor’s output is 268 horsepower. BMW revealed today that an iX M60 model is on its way “with over 600 hp” as the first electric M crossover. Timing on that model is not yet available. The standard xDrive50 model will cover the 0-62 mph sprint in just 4.6 seconds, so expect the M60 to be closer to or under 4.0 seconds. BMW is choosing to use a single-speed transmission, unlike the Porsche Taycan’s two-speed transmission.

BMW went over charging speeds and range at a surface level before, but there’s even more to learn today. There’s only one battery option available. It’s a 111.5 kWh battery pack, but BMW limits it to 106.3 kWh. This practice of limiting the battery from being charged to maximum capacity is common among EVs. There’s still no official EPA-estimated range available, but BMW is continuing to claim a range of “around 300 miles” on a full charge. Plug the iX into a DC fast charger, and it will take 40 minutes to charge from 10% to 80%. In useful terms, feeding an iX at 200 kW charge speeds would increase the range by 90 miles in 10 minutes, assuming you’re starting from a 10% charge. BMW is making EVgo its public charging infrastructure partner, offering a more seamless charging experience for iX owners and a free $100 of charging to get you started. 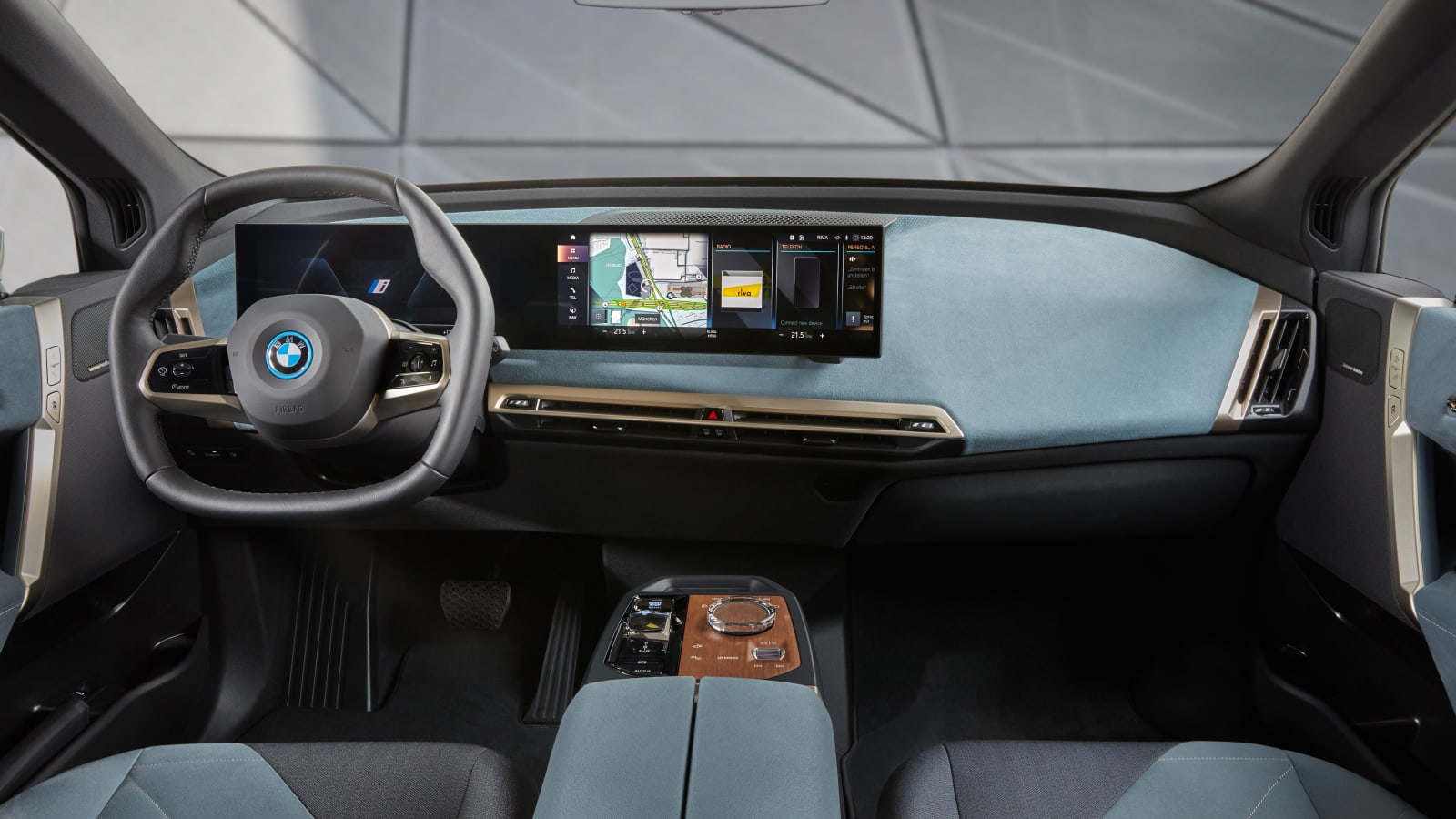 Also new today are details about its suspension and chassis technologies. BMW is using “lift-related shock absorbers” as the standard suspension. There’s extra hydraulic damping incorporated into the shocks, which can adjust the firmness according to the changing suspension travel. With great suspension lift, a second piston drops down into the inner sleeve to generate an additional damping effect. BMW says the tech ultimately results in less body dive over large bumps and higher levels of comfort over minor road imperfections.

You can also forget about the above and option BMW’s adaptive air suspension that includes electronically controlled shocks and adjustable suspension height settings. Damping is continuously adjusted with these shocks as it is in BMW’s other electronically controlled adaptive suspensions. Maximum ground clearance isn’t stated, but it’s possible to raise the iX 0.8 inch on command or lower it by 0.4 inch in Sport mode. The iX automatically drops to its lower ride height at speeds exceeding 87 mph up to its top speed of 124 mph.

BMW says it’s using a new steering gear (debuting in the iX) for its standard variable ratio steering rack. However, the company’s optional Integral Active Steering system is also available and adds rear-wheel steering to the mix. The rear wheels can turn opposite the fronts to increase agility in corners/decrease the turning radius when parking, and they can also turn with the fronts to provide greater stability at speeds. 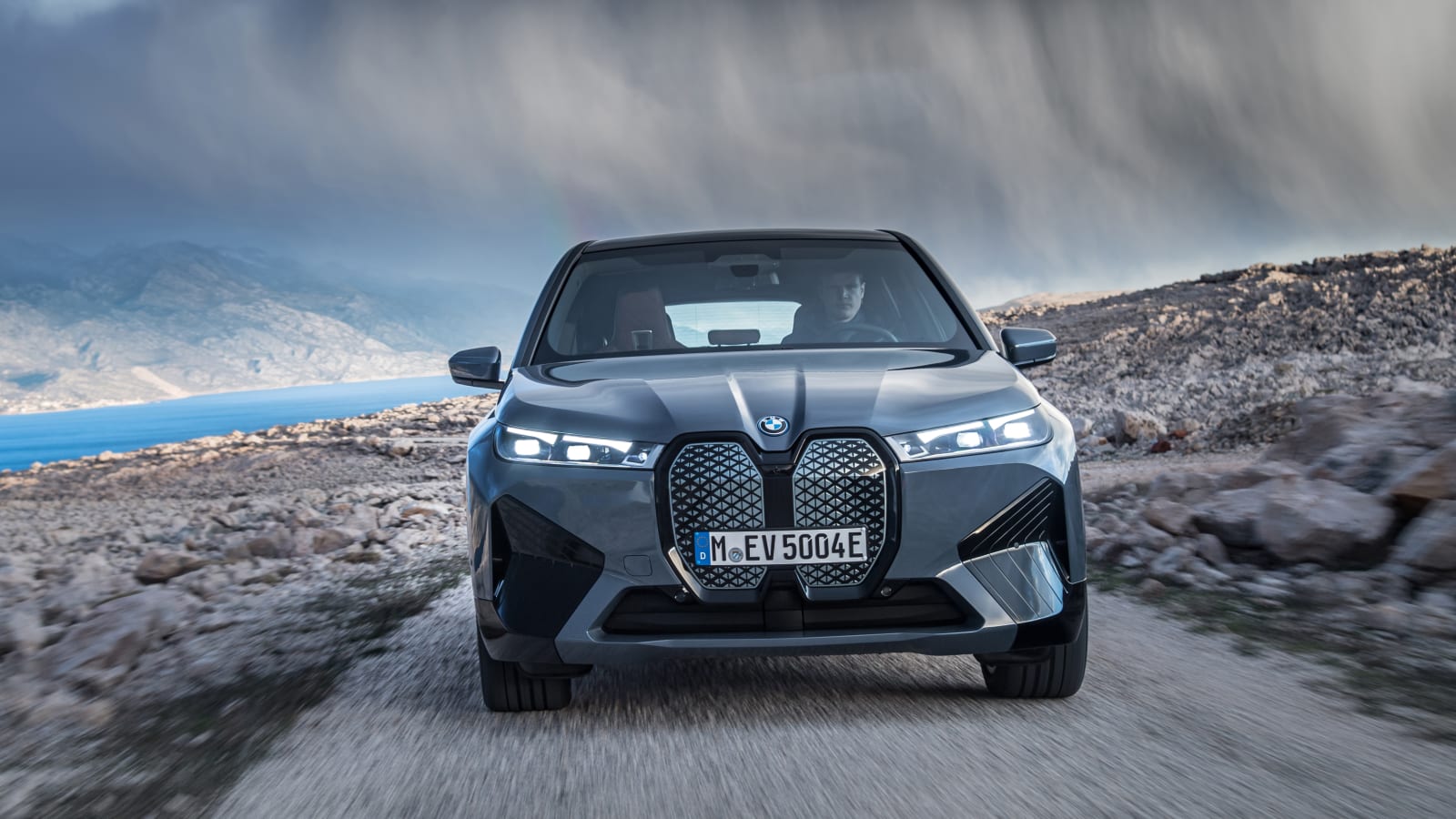 A new electric all-wheel-drive system is coming to the iX that is fully variable and can split torque to be either rear-drive-only for maximum efficiency or all-wheel drive for maximum traction. The traction control system designed for new BMW EVs also features “near-actuator wheel slip limitation” tech. This TCS system is integrated into the motor management system in an effort to eliminate any sort of signal travel lag to apply any corrective inputs quicker and more precisely between the front and rear wheels.

The brake-by-wire system allows you to select your preferred brake pedal experience. BMW says that one-pedal driving will be possible, but there’s also a coasting option and a combination of the two that sounds like it will be the closest to what a traditional gasoline engine car’s brakes feel like. Hiding the brakes are standard 20-inch aero-focused alloy wheels. You can step up to optional 21-inch or 22-inch options that BMW calls Air Performance wheels — BMW claims they are about 15% lighter than conventional light-alloy wheels. These optional wheels are also the ones fitted with special tires developed specifically for the iX to reduce tire noise on account of it being an EV.

Lastly, BMW revealed a starting price for the iX xDrive50. It begins at $84,195, including the $995 destination charge. BMW says that we should see the first iXs roll into the U.S. come the first quarter of 2022.