Biden is open to electrifying 'The Beast' limo

The 2022 Acura MDX is the luxury brand’s three-row family crossover, and it received a complete overhaul for this new generation. It’s Acura’s best-selling model of all time with more than a million total sales, and for good reason. Nevertheless, Acura found ways to make it even better. Its new underpinnings improve things like ride and handling, and the new design is attractive, with a sporty exterior and high-quality interior. It’s good for families, with its utility and three rows of seating, but acceptable for enthusiasts, too, with a sporty powertrain and an intelligent “Super Handling All-Wheel-Drive” system that provides confidence even when seeking out the twistiest of roads.

If you’re looking for a luxury ute that offers something a little different than the rest of the herd without sacrificing quality, utility or performance, the 2022 MDX might just be the crossover you’re looking for.

For 2022, the Acura MDX has been completely redesigned from the ground up. 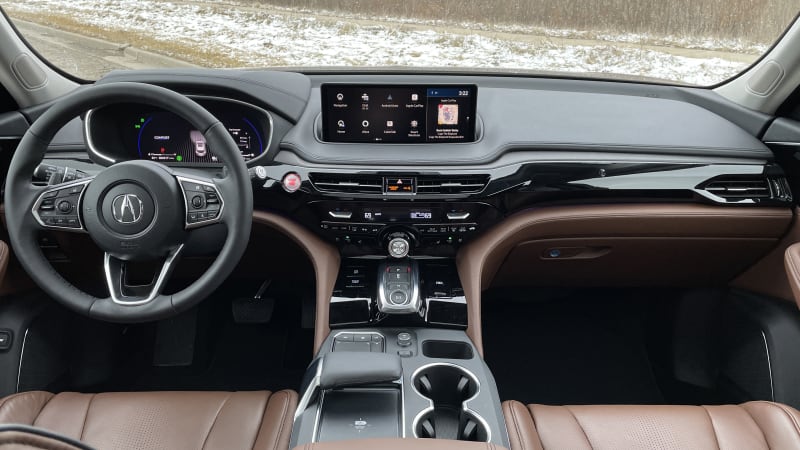 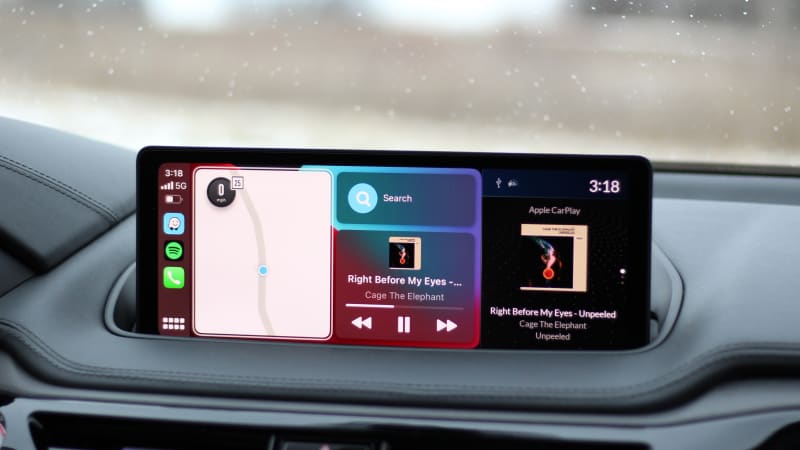 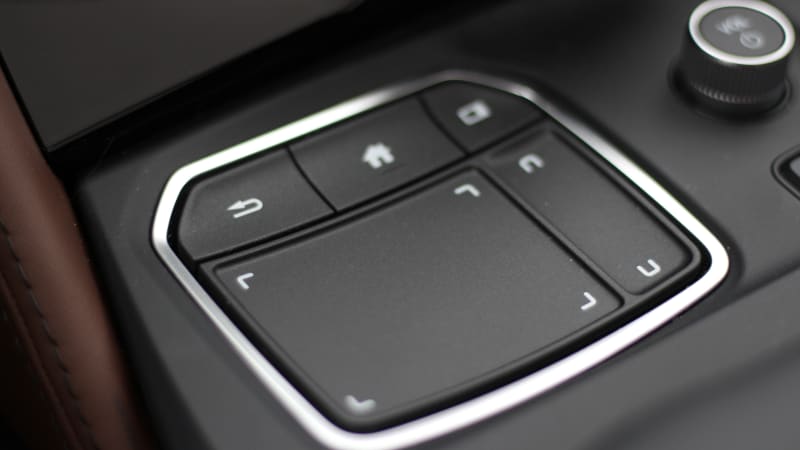 The new cabin clearly shares visual DNA with the RDX and TLX designs, but it’s a more expansive, elevated take that skews more towards luxury than sport. Material quality also sees a significant jump upmarket. Sure, a Mercedes-Benz, BMW or Audi will still outclass the MDX, but Acura isn’t very far behind anymore, and all the German competitors are significantly more expensive. Acura promises that if you see a material that looks like wood or metal, it’s genuine. Fancy LED ambient lighting can be customized with tons of different themes. The seats are both pretty (nice piping and patterns in the leather) and comfortable.

Its 12.3-inch infotainment system is loaded with features, and the available ELS Studio audio system will bump with the best of them. The MDX also marks Acura’s first application of a fully digital instrument cluster, and it’s a good one. You can choose between a couple base layouts for the 12.3-inch screen, but those can be changed/customized even further via the drive mode dial — each mode has its own layout. A 10.5-inch head-up display is available with the Advance package. Apple CarPlay, Android Auto, Amazon Alexa Wi-Fi hotspot and wireless phone charging are standard on all trims. 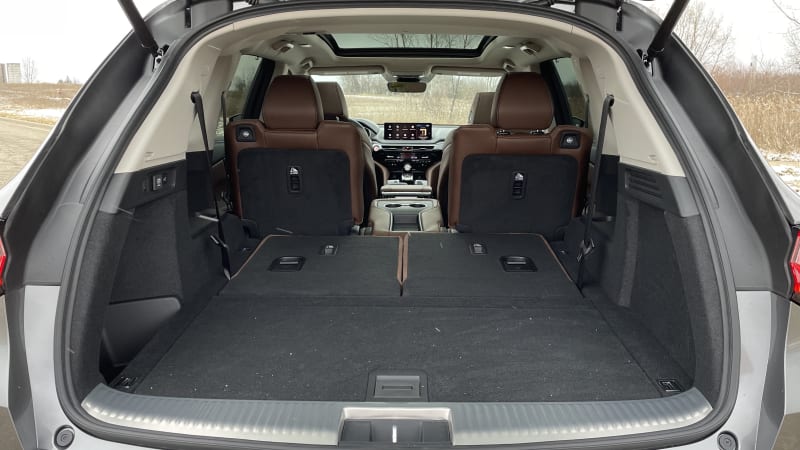 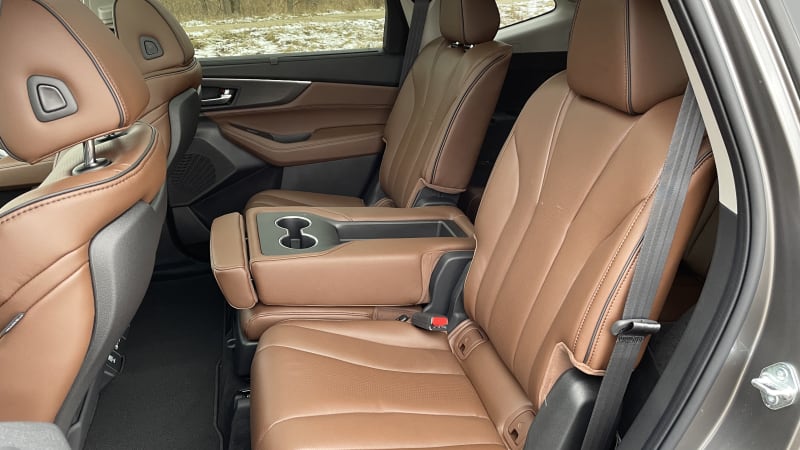 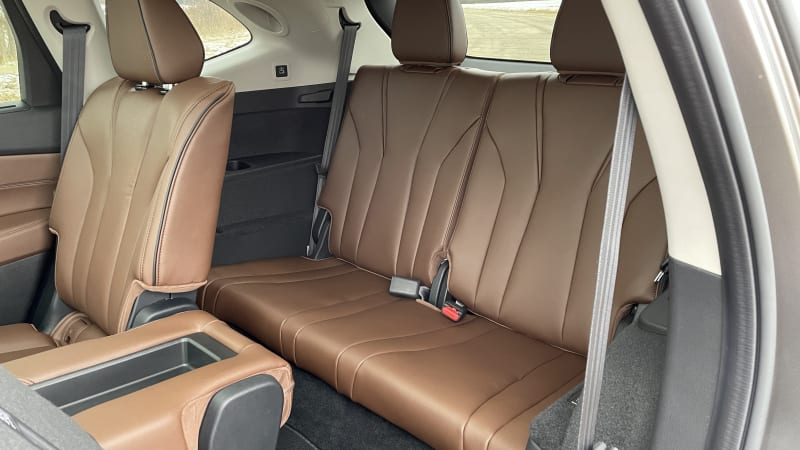 How big is the MDX?

The MDX has three rows of seating, but it’s still a midsize crossover, which means that third row is on the small side. Still, Acura has added 2.4 inches of legroom back there, and found a touch more headroom despite raising the seat bottom by 2 inches, making it more usable than before for teens or adults. Its novel second-row seats can sit three-across (seven-person maximum capacity), fold the center seat down for a massive center console, or completely remove the middle seat to leave yourself with a pair of quasi captain’s chairs.

Cargo space is up over the last generation, with 16.3 cubic feet behind the third row — the same as the Lexus RX — which is enough for a grocery haul. A clever storage bin beneath the removable floor panel gives more room for taller items, or can be used to stash infrequently used items like a first aid kit or ice scraper. Cargo volume expands to 39.1 cubic feet with the third row folded, or 71.4 cubic feet with both rear rows folded flat — handily beating the Lexus RX’s 58.5 cubes, and more in line with the BMW X5’s 72.3. 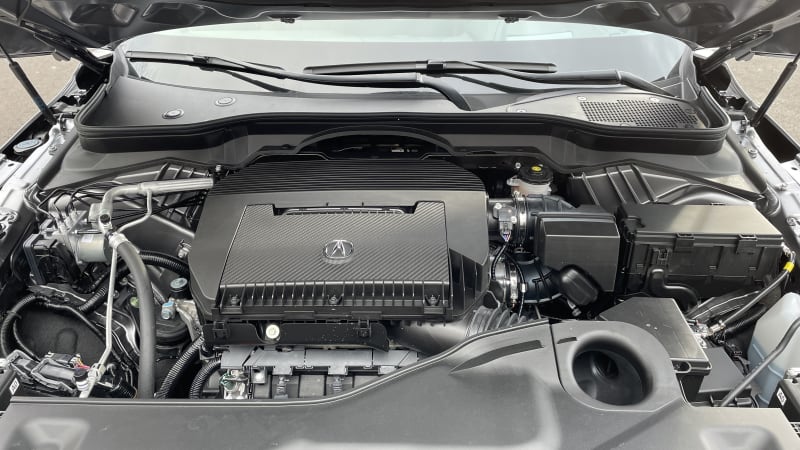 What are the MDX’s fuel economy and performance specs?

The sole engine offered in the 2022 MDX is a 3.5-liter V6 producing 290 horsepower and 267 pound-feet of torque. In both front- and all-wheel-drive versions, that is routed to the wheels via a 10-speed automatic transmission with sequential paddle shifters. Compared to the last generation with its nine-speed auto, the 2022 MDX offers far better pull off the line and at low speeds than we were expecting. It requires a lot of shifting to get the job done (you’re at the top of third gear by 60 mph), but Acura successfully used gearing to make the MDX feel more potent than the numbers suggest it would be. Plus, it’s above average when you toss it into manual shifting mode, responding eagerly to inputs from the nicely shaped paddles.

An MDX Type S with the 3.0-liter turbocharged V6 (355 horsepower and 354 pound-feet of torque) is coming in the summer, so if you desire more power, we suggest waiting. Acura also left the door open for a return to hybrid power in this generation of MDX, but we don’t know any details about it or when it might be coming.

Fuel economy for the MDX with front-wheel drive is 19 miles per gallon city, 26 highway and 22 combined. SH-AWD models lose 1 mpg in highway and combined ratings, putting it at 19/25/21 mpg.

The MDX with front-wheel drive is rated to tow 3,500 pounds, while the SH-AWD model gets a 5,000-pound tow rating. 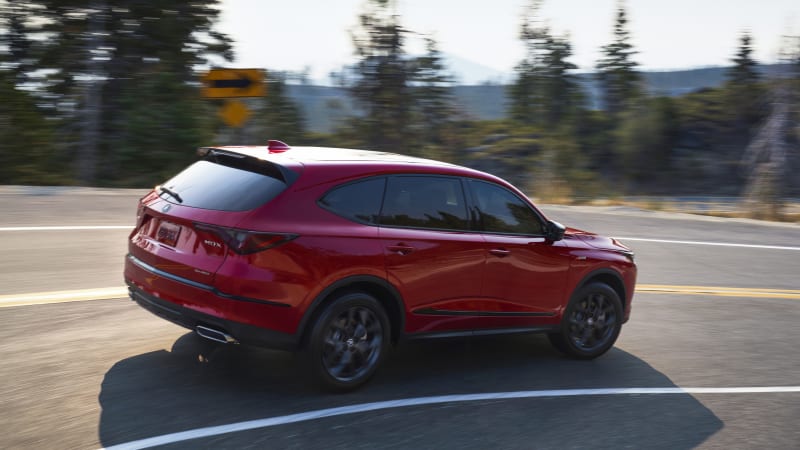 The 2022 MDX’s ride and handling benefits from a substantially stiffer platform with independent double wishbone suspension. The structural changes contribute to a greater sense of nimbleness and stability to the chassis you wouldn’t expect in a vehicle its size. The confidence it instills in you to keep trying to extract more in corners and push harder is not the norm for this segment. The torque vectoring of the SH-AWD system improves things even more, so much so that we believe it’s well worth the $2,000 upgrade over a front-drive model, even if you live somewhere that doesn’t experience winter weather.

Thankfully, Acura hasn’t neglected ride quality and usability in the name of performance. The MDX soaks up poor city streets and bad roads with the best of them. It’s remarkably comfortable to just peaceably cruise around in. That V6 is unobtrusive until you step on it, and only then it makes the typically-satisfying Honda growl. There’s a modicum of wind noise that intrudes at highway speeds, but the cabin is generally serene.

The new brakes with the electric brake booster system are the only big flaw we found, with a vague, mushy feeling that doesn’t offer the precise brake feel we’ve enjoyed in other Acuras, like the TLX.

What other Acura MDX reviews can I read?

Our first outing with the new MDX left us thoroughly impressed with the crossover’s design, fit, finish, material quality performance and handling.

How much is the 2022 MDX price and what features are available?

The base price is $47,925. That gets you a front-wheel-drive model with 12.3-inch displays for instruments and infotainment. A 350-watt, nine-speaker sound system is also standard as is wireless Android Auto and Apple CarPlay, wireless charging, Amazon Alexa integration, a panoramic sunroof, and the AcuraWatch suite of driver-assistance features. As before, AcuraWatch includes automatic emergency braking, adaptive cruise control and lane-keep assist, but it’s been bolstered for 2021 by rear automatic emergency braking and stop-and-go functionality for the adaptive cruise control. All-wheel drive is a $2,000 option on the base MDX and the MDX with Technology Package, and it’s standard on the A-Spec and Advance Package models. Base prices for all MDX models are listed below. You can find a full breakdown of the other trims’ extra features, plus specs and local pricing here on Autoblog. 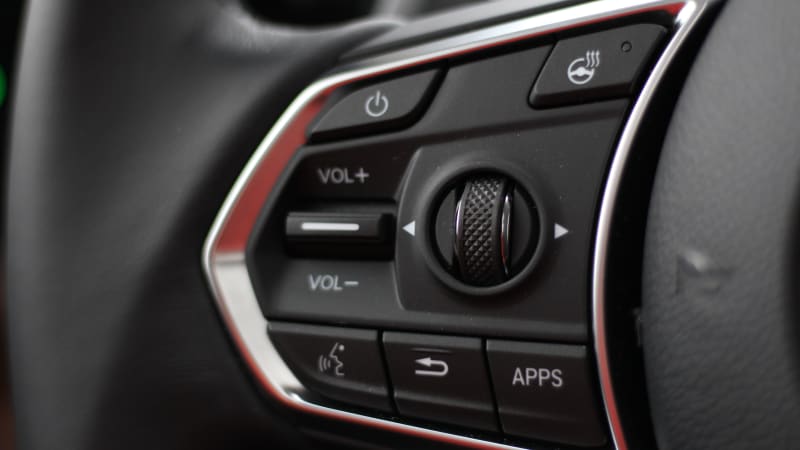 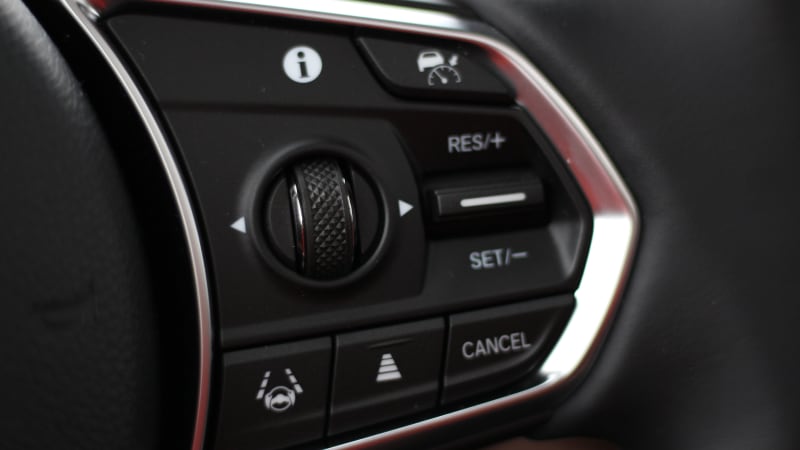 What are the MDX’s safety ratings and driver assistance features?

The 2022 MDX receives the top safety ratings from both major third-party crash-testing organization. It receives five (out of five) stars overall from the National Highway Traffic Safety Administration, receiving five stars in each various department except rollover crashes, for which it earned four stars. It earns an Insurance Institute for Highway Safety rating of Top Safety Pick+, earning the highest “Good” rating in each type of crash test, as well as top headlight, crash avoidance and LATCH ease-of-use ratings.