Biden is open to electrifying 'The Beast' limo

SALINAS, Calif. — A lot has changed since Acura offered its last Type S model over a decade ago. Tesla’s EVs have plundered a sizable chunk of market share, Korean manufacturers have stormed the near-luxury and luxury segments, and Acura, in an effort to restore the luster of their once-revered nameplate, rebooted the legendary NSX as a hybrid-powered supercar halo with the hopes that desirability (and some hardware) will trickle down into the rest of the lineup.

That last part is key to understanding the mission of the new 2021 Acura TLX Type S. Though the premium sport sedan segment isn’t necessarily hotly contested, the Type S still plays a critical role in bolstering the brand’s credibility. Positioned as a step above the turbo four-cylinder-powered TLX ($39,500) and the better-equipped TLX A-Spec ($45,500), the TLX Type S starts at $53,325 and packs a number of performance upgrades that make it high-performance capable. Just don’t expect it to be as track-worthy as a Honda Civic Type R.

The Type S is built on Acura’s stiffest sedan chassis to date. Packing an all-new twin-scroll turbo 3.0-liter V6 under its flared hood, the Type S makes 355 horsepower and 354 pound-feet of torque. Despite gains of 83 hp and 74 lb-ft, combined fuel economy drops only 3 points to 21 mpg with the hotrod V6. Aiding the cause is a cylinder deactivation system and active vibration control to mask the transition between six and three cylinders. 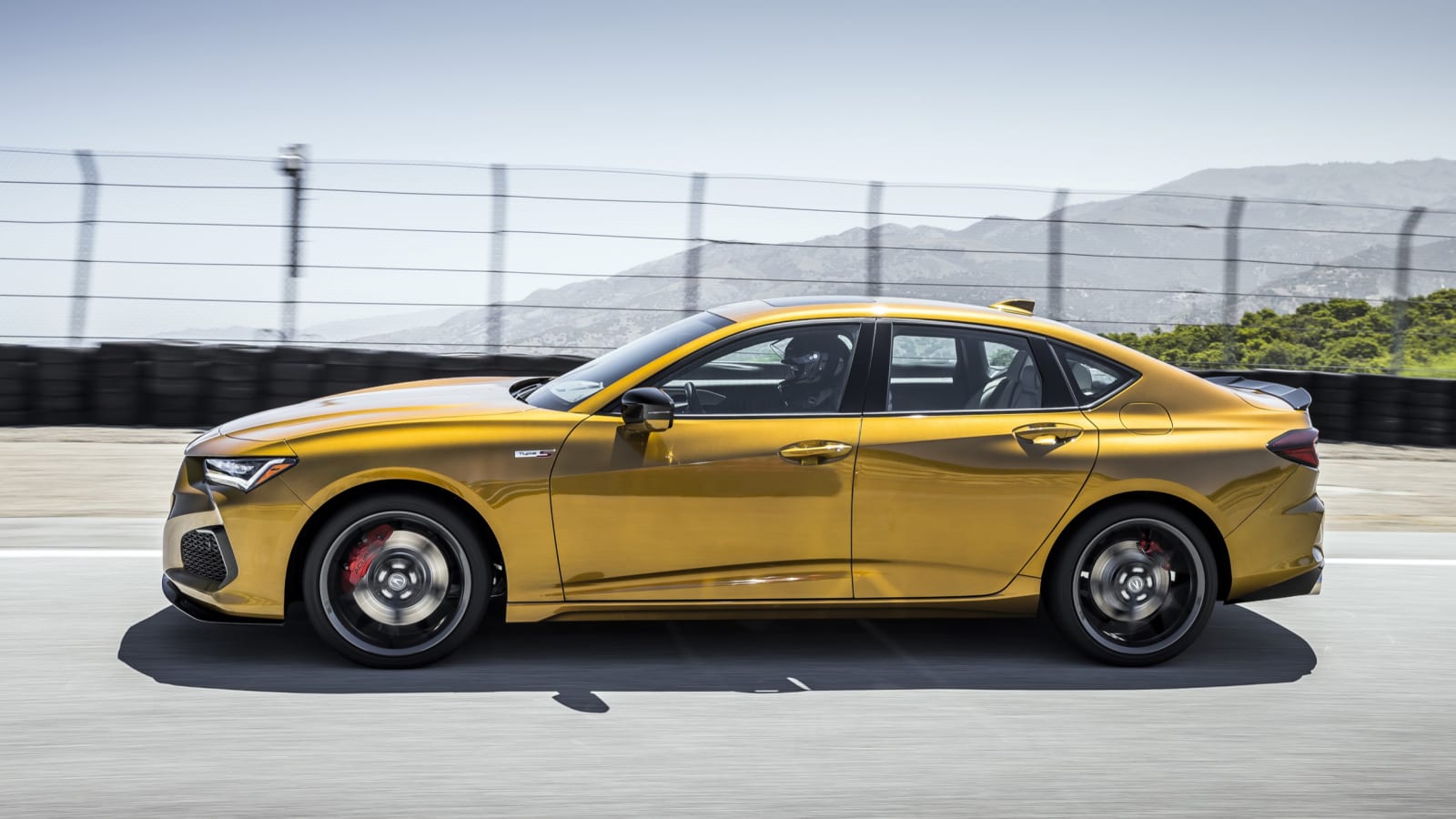 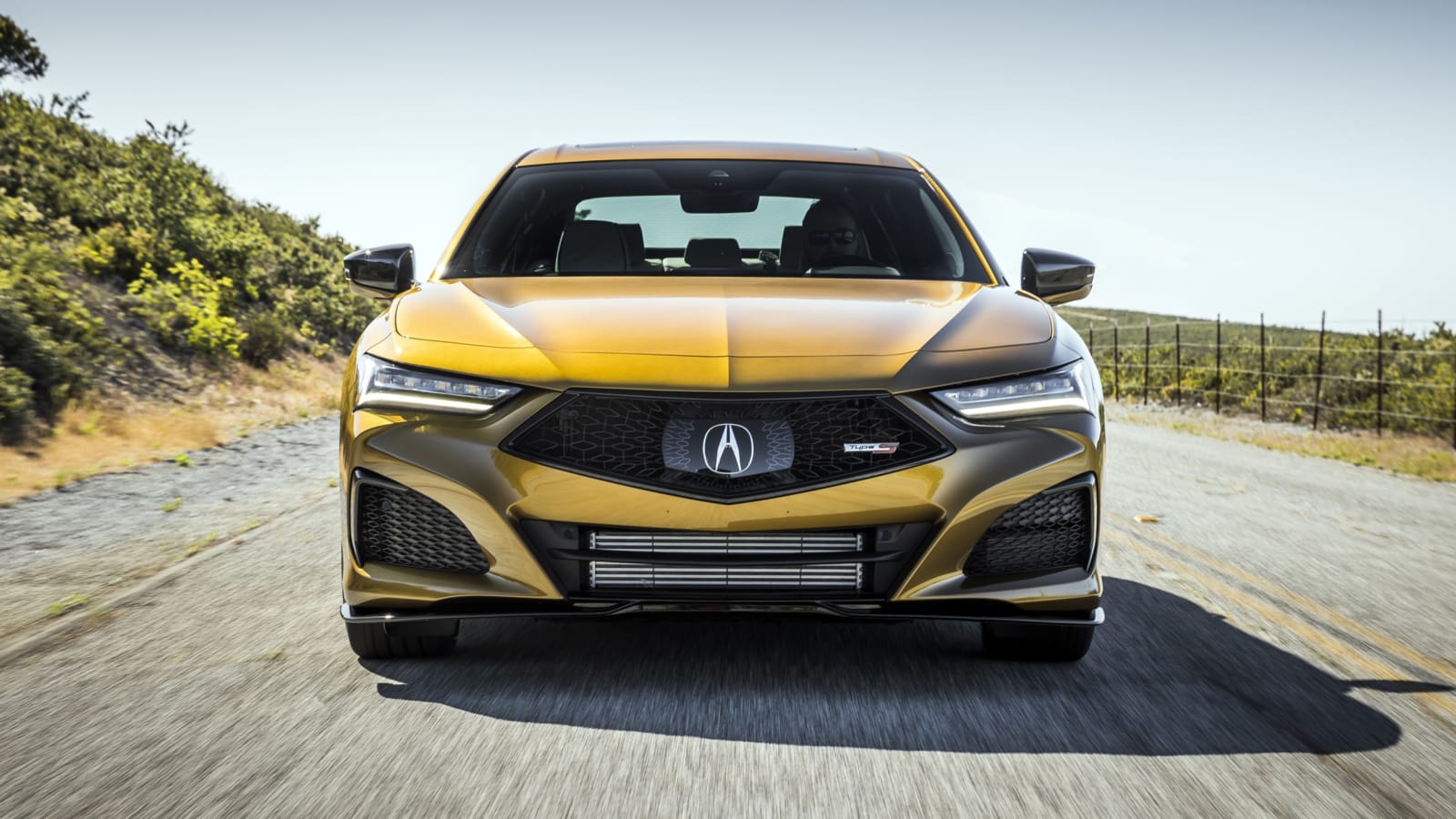 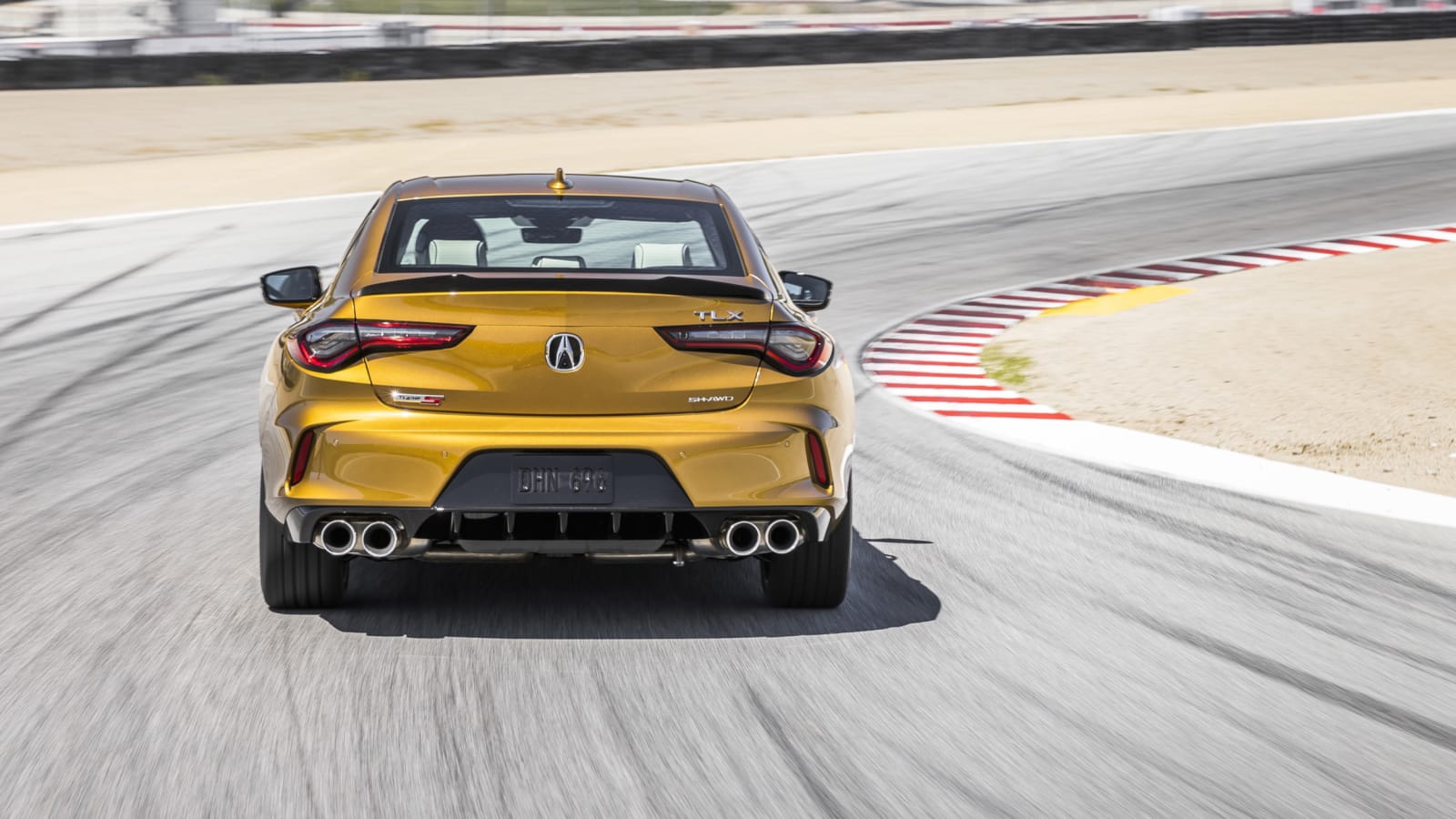 To showcase these enhancements, Acura held the Type S first drive at WeatherTech Raceway Laguna Seca, hauling up a few historic vehicles for good measure including a first-gen NSX and a Honda S2000 CR. Old school Type S specimens included a 2001 CL, 2007 TL, and a 2007 RSX. The perspective was intriguing — for revealing the backstory of the Type S trim level, but also the fact that Acura once built naturally aspirated 8,200-rpm screamers and three-pedal setups, which have since been replaced with turbos and automatics.

Priorities and regulations change, and for better or worse, the 2021 TLX Type S has ditched the free-breathing configuration for a more sensical (but arguably less visceral) single turbo setup and a 10 (!) speed auto. 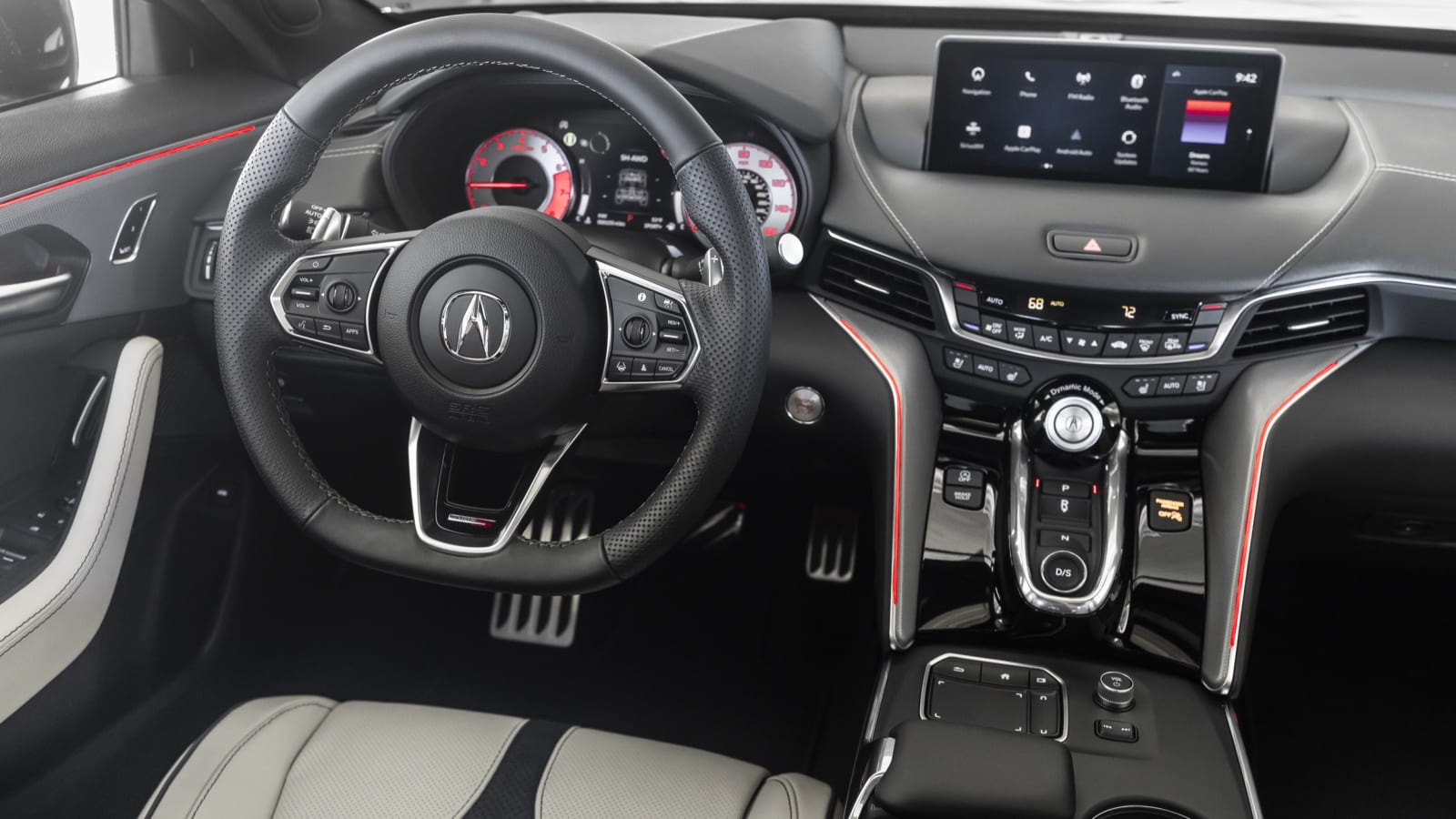 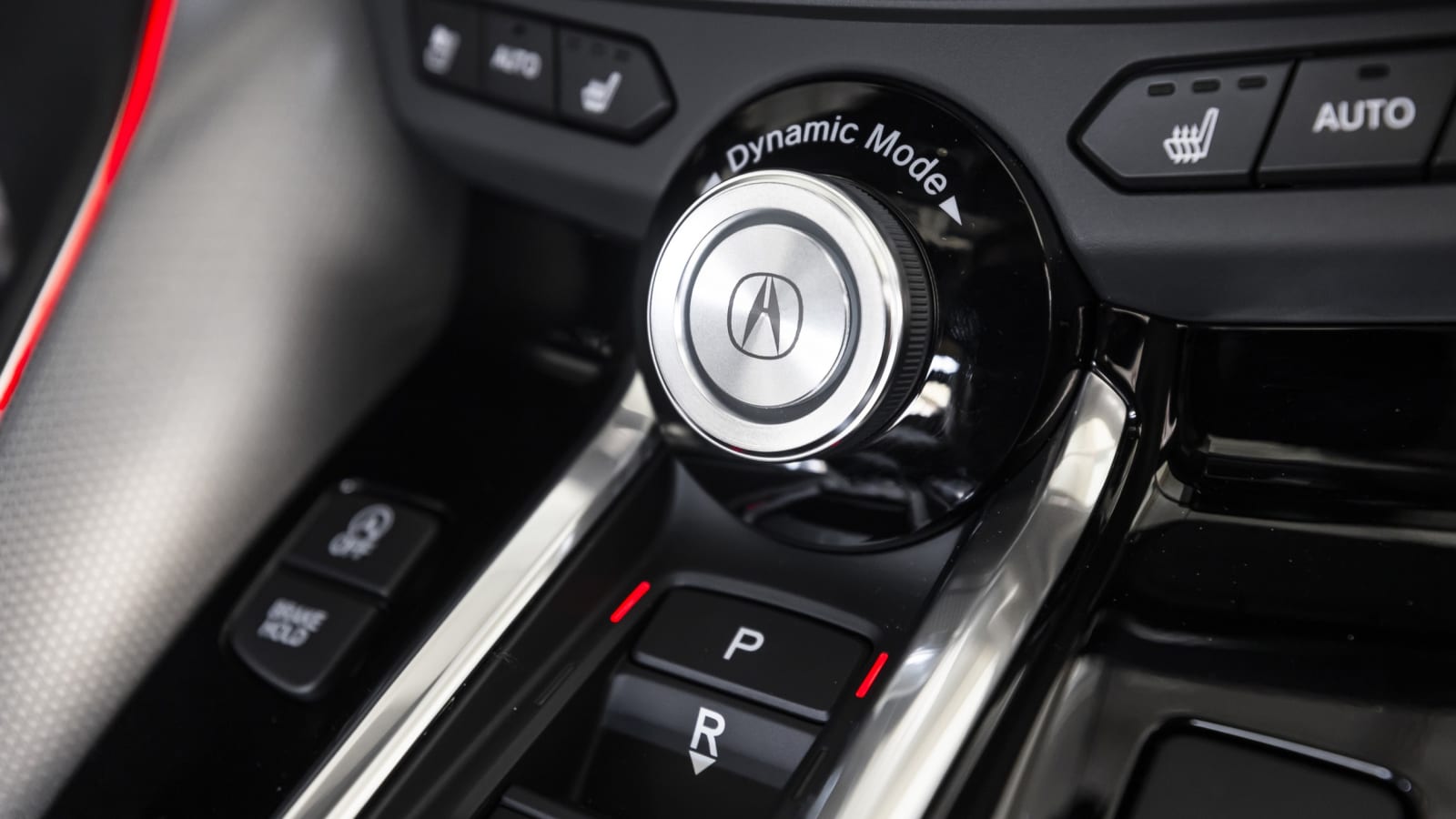 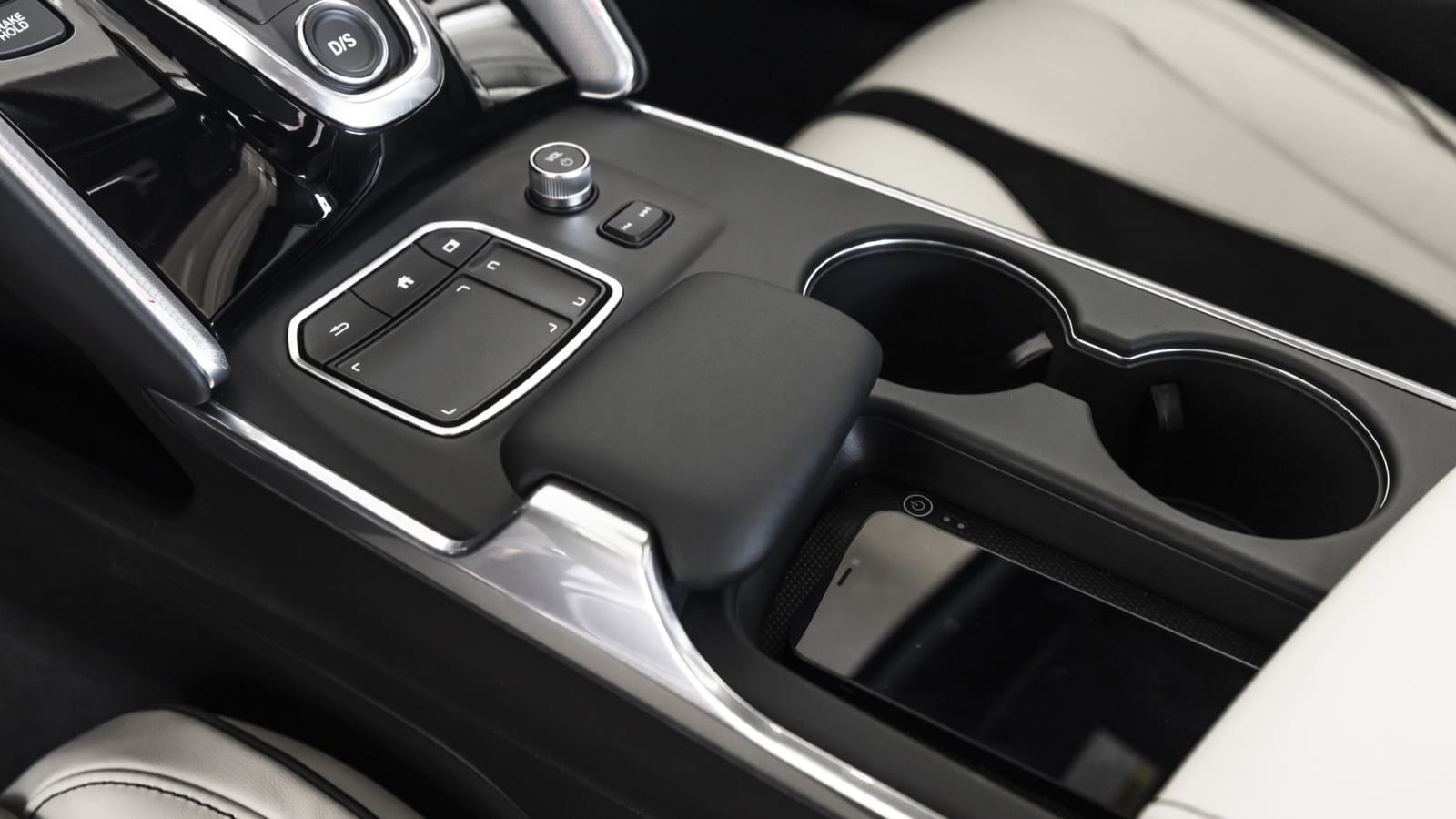 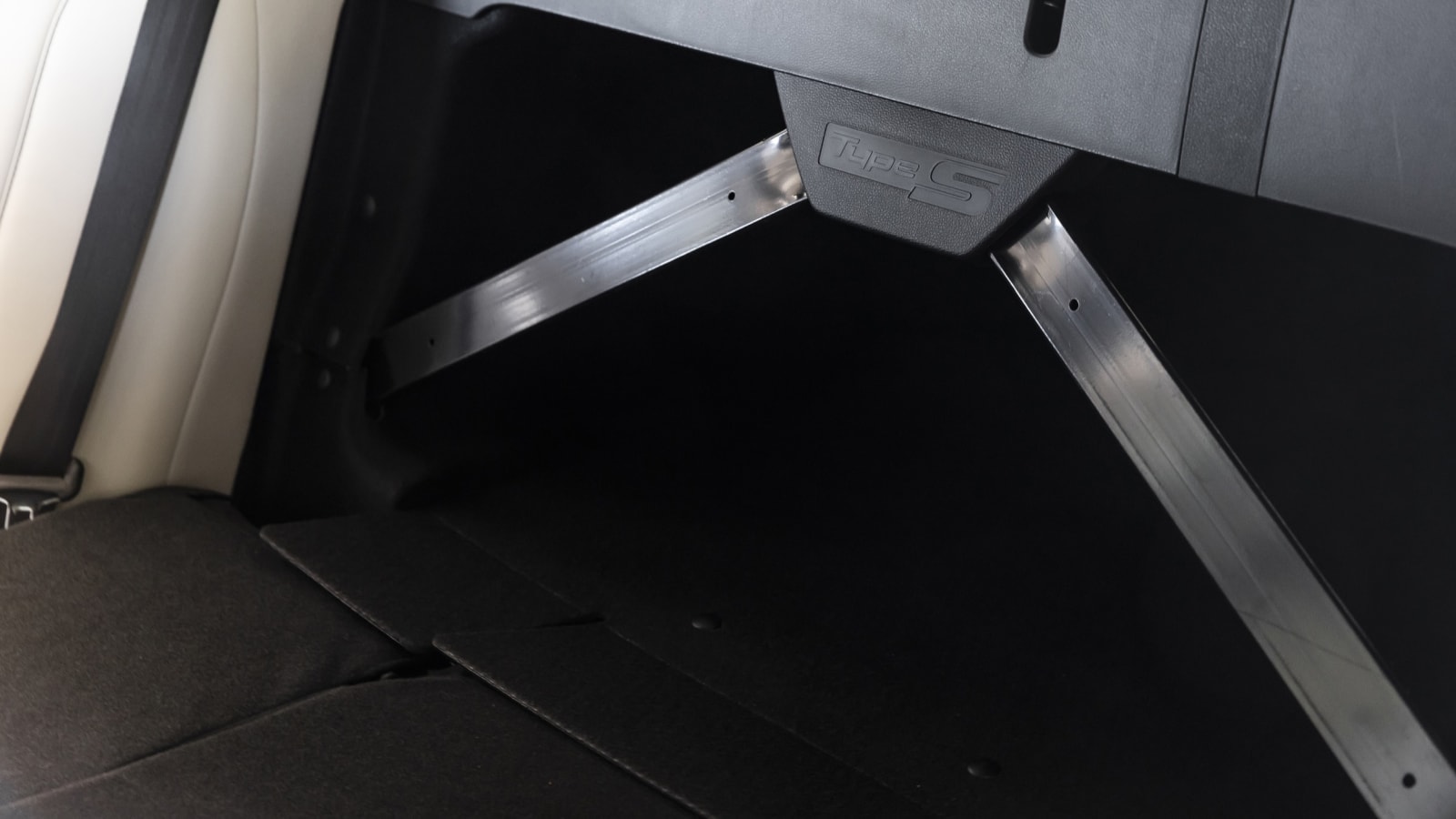 Climb inside, and a relatively busy dashboard and center stack arrangement combine sculpted surfaces with Acura’s so-called True Touchpad Interface and a few conventional hard buttons. Although at least one Autoblog editor has made peace with it, I cannot be counted as a fan. The non-touchscreen 10.2-inch display is a clunky and frustrating way to manage some of the car’s simplest settings.

On the flipside, at least the Type S comes standard with a 17-speaker ELS Studio 3D sound system with outstanding audio quality aided by active noise cancellation to deliver crisp, clean-sounding tunes. Also good: The hard buttons below the volume knob for skipping or backing up track selection. The feature is largely extinct in modern cars, and this holdover is a reminder that not all change is good when it comes to human/machine interface design.

Our first impressions behind the wheel of a TLX Type S come in a lead-follow formation behind a current-gen NSX at Laguna Seca. Twist the dial for Sport+ in pit lane, and the idle climbs from 680 rpm in Comfort (or 800 rpm in Sport) to a more manic 1,000 rpm. Similarly mood-setting is the instrumentation and interior lighting, which shifts to a shade of crimson … Grrrr, let’s get this chase started.

Pressing the D/S button enables a more aggressive shift pattern for the enhanced 10-speed and tapping a paddle shifter overrides the transmission into manual mode. When accelerating onto the track, having 10 cogs to choose from means it’s almost impossible to select the wrong gear since the ratios are so close together. Slowing down? Simply tap the left paddle once, twice, possibly even three times and you’ll still be within the powerband with rev-matched downshifts occurring 40% faster than in the four-cylinder TLX. Similarly, the fact that the gearbox doesn’t hold a gear is less of a bummer than you might think; with so many gears to choose from and the engine’s ability to spin beyond its indicated 6,200 rpm redline, manually determining a shift point would be that much more of a hassle. It’s just as well that the computer does the shifting when the time is right. 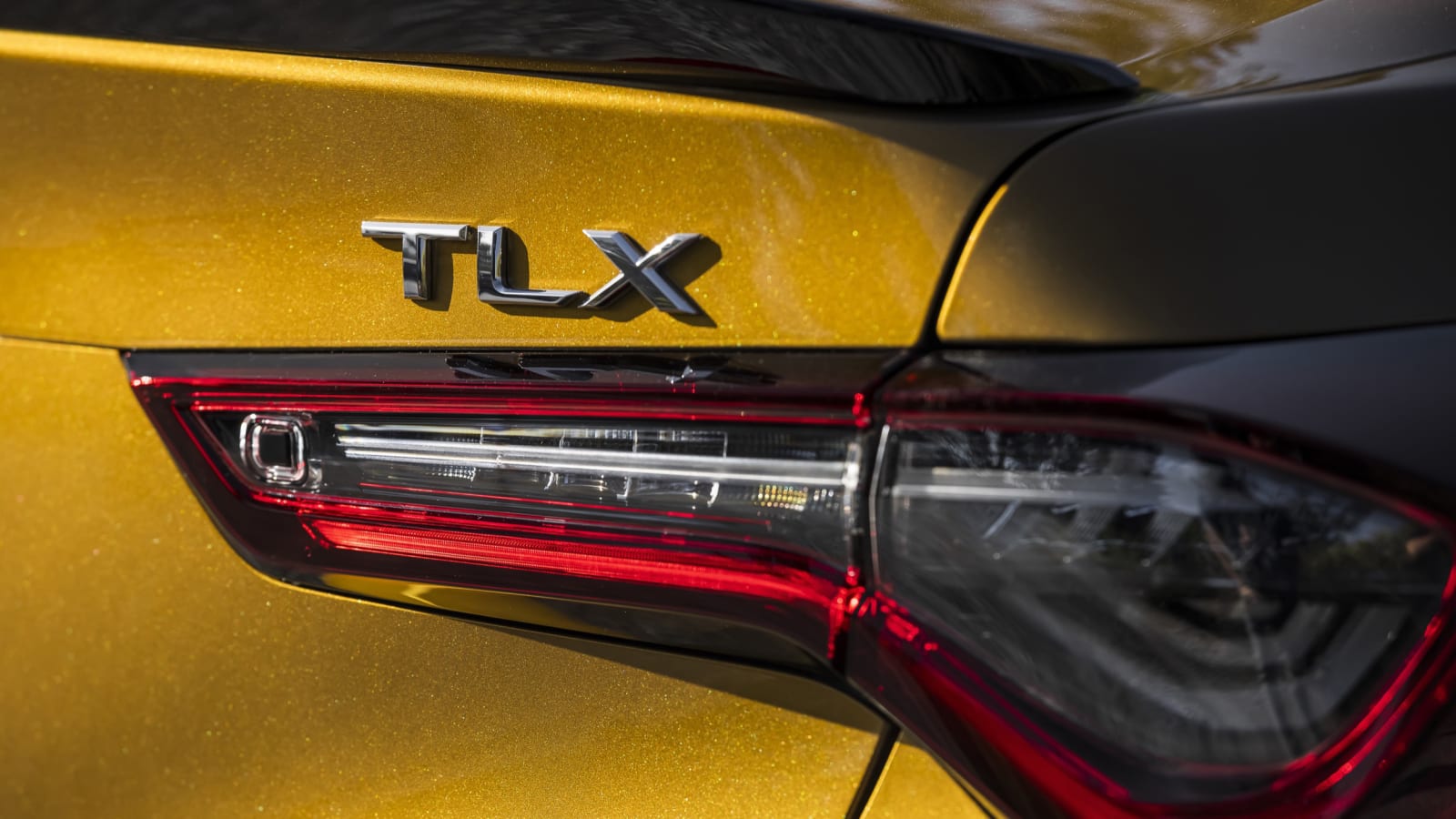 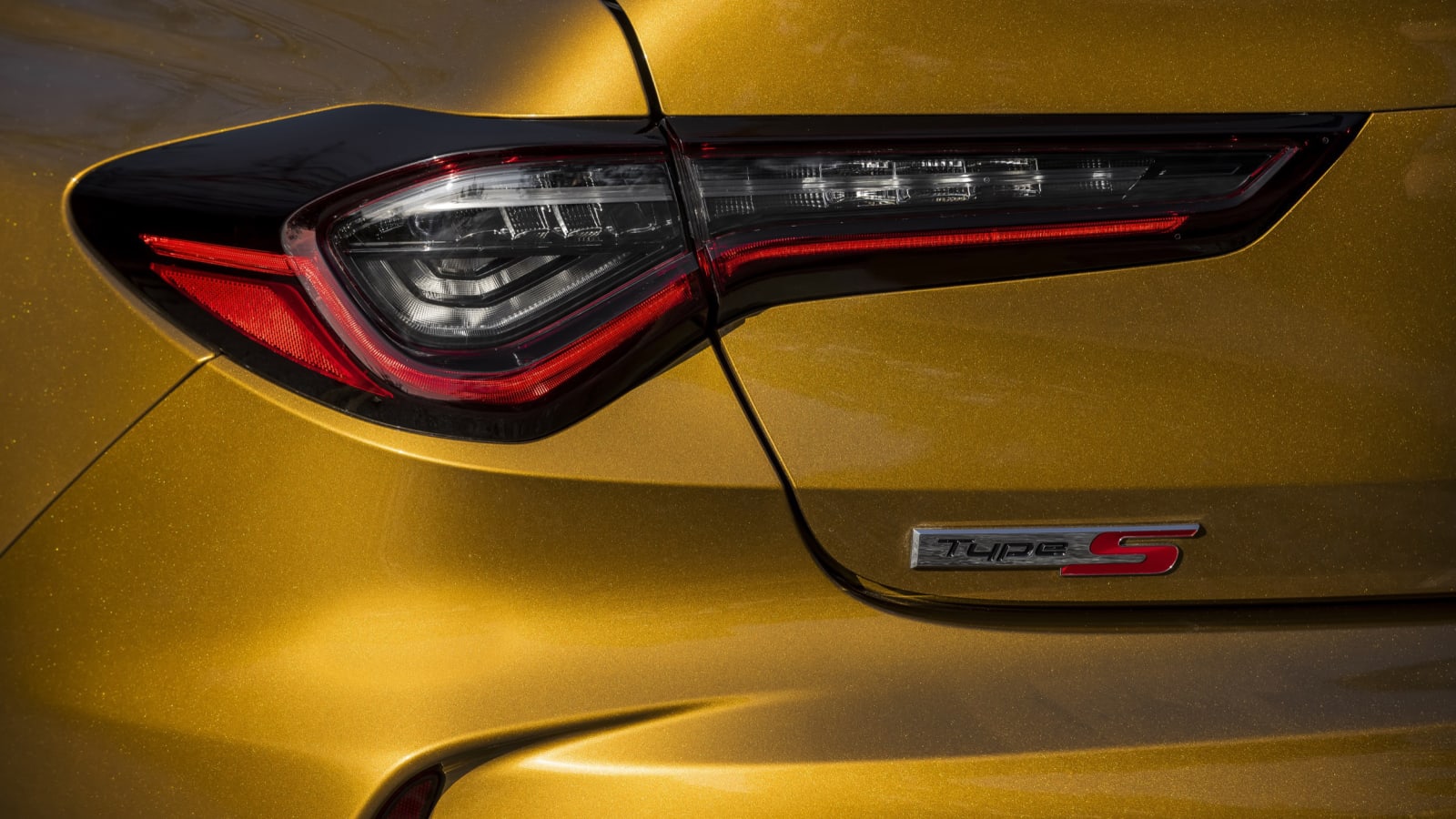 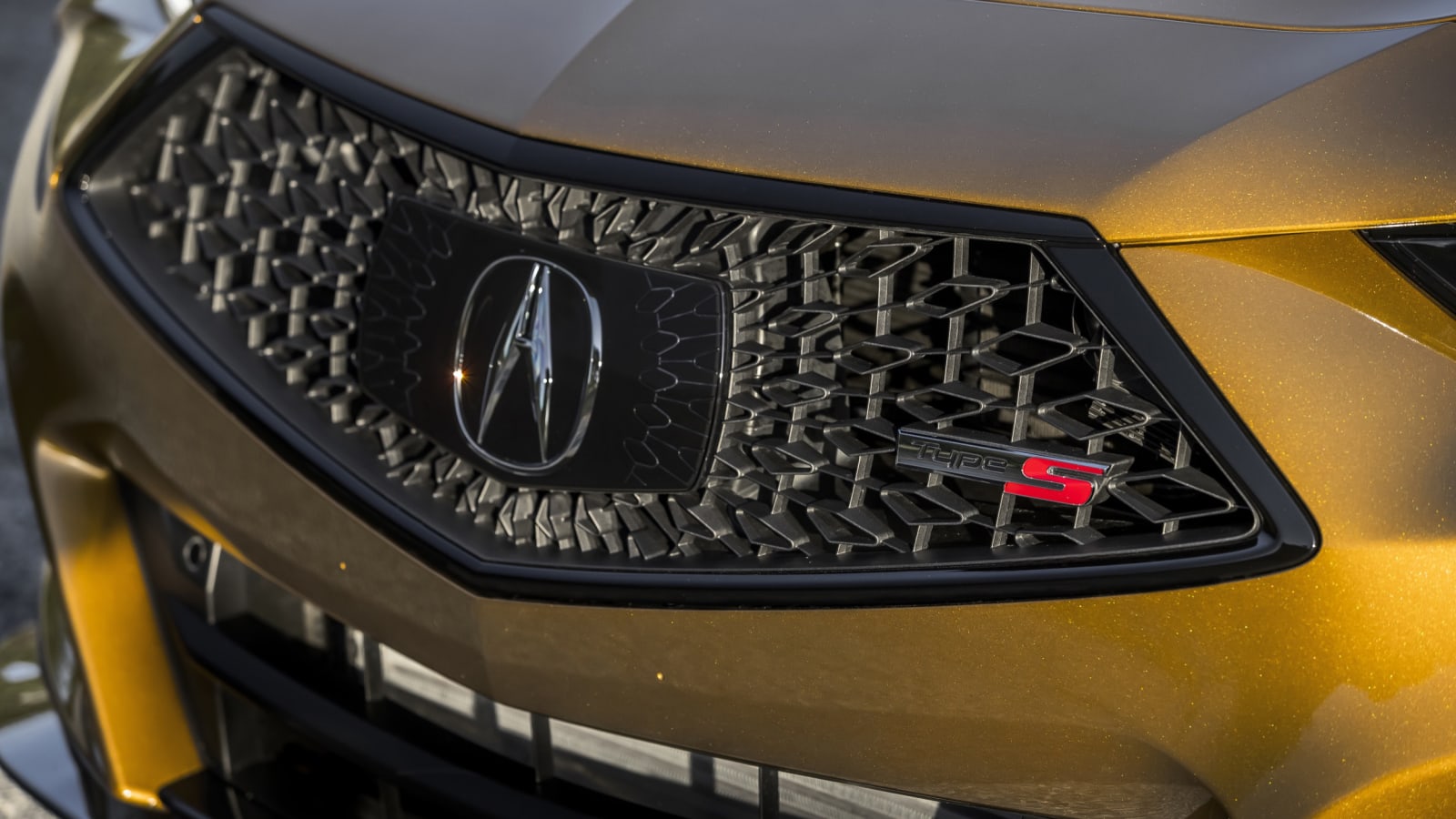 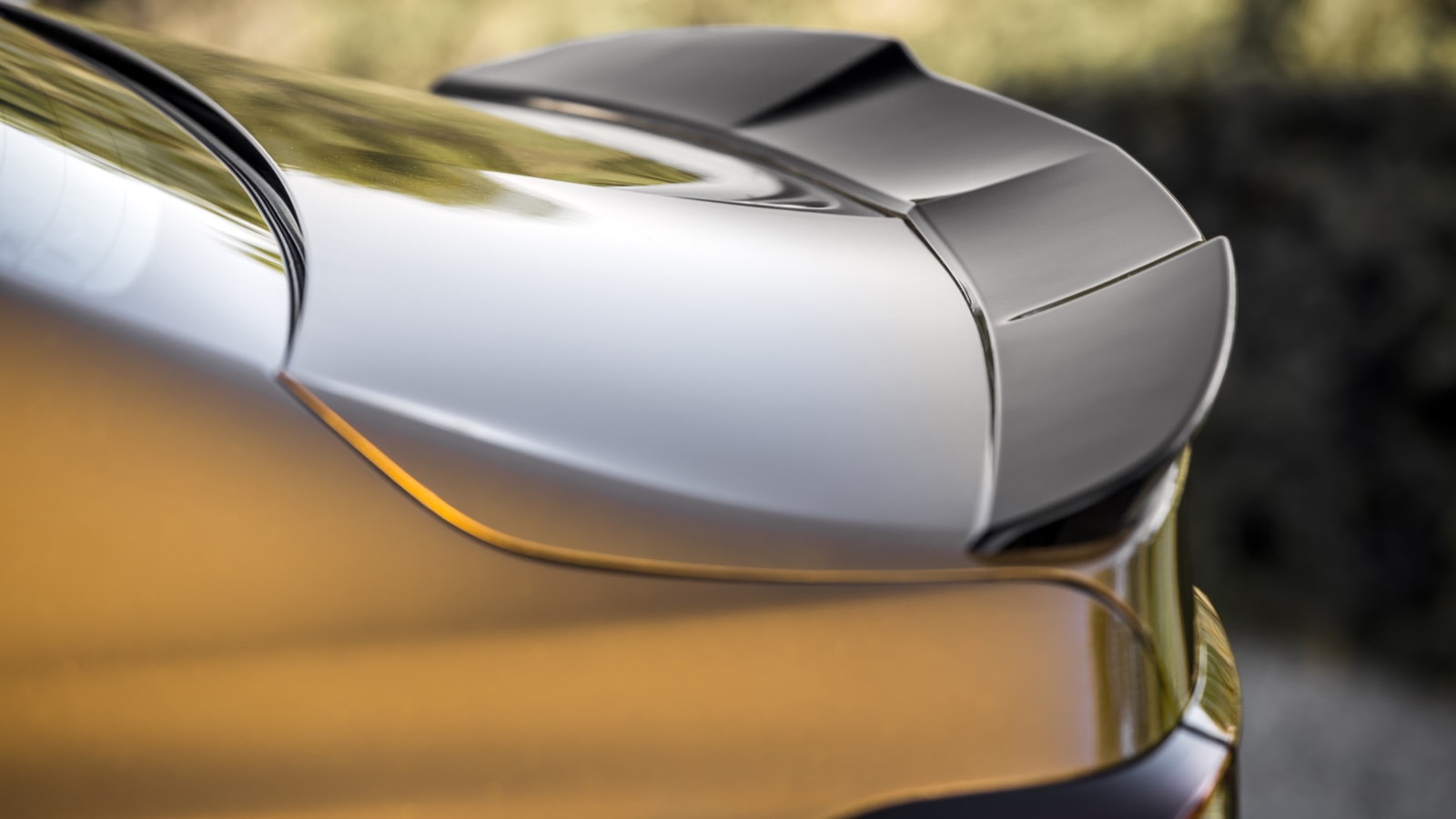 The Type S 10-speed auto has been reinforced for the increased engine output. Though Sport+ mode coupled with the transmission in the ‘S’ setting keeps revs appropriately high in automatic, there’s a bit of a paradox in how the transmission relates to using the engine’s powerband. Max torque arrives at an expansive plateau between 1,400 and 5,000 rpm, which makes for smooth cruising on the road. But with horsepower peaking at a lofty 5,500 rpm, tailing an NSX on a closed course means that revs must be kept in the last 2,000 rpm or so to keep up. Power delivery is relatively smooth even in Sport+ mode, so there isn’t a whole lot of longitudinal drama while attacking Laguna’s 2.238-mile course; mash the pedal, and you’re not exactly shoved back in your seat due to the linearity of the V6’s power delivery and the relative smoothness of the shifts.

However, lateral Gs are considerably more fun thanks to upgrades to the Type S’s suspension and Super Handling All-Wheel Drive system. With more aggressive tuning than standard models, the Type S diverts more power to the rear wheels in Sport+ mode and uses vectoring — both through engine power and brake torqueing — to rotate the car. According to Acura’s metrics, the all-wheel-drive system’s side-to-side torque bias climbs 40% in Sport+, and the system can overdrive the rear axle by 2.9% in order to accentuate the yaw effect in corners. What does that mean in plain English? Aiming the wheel in the desired direction and jamming the accelerator tucks the nose and slides the tail in a delightfully satisfying slide.

Despite the TLX Type S’s considerable mass – 4,221 pounds – and challenging weight distribution – 59% front, 41% rear – clever engineering helps mask the unfavorable physical limitations. Brake vectoring helps turn the car, while drivetrain hardware elements including a rear differential with an electric motor powering a pair of hydraulic pumps, which in turn actuate clutch packs to distribute power left and right. We suspect the reliance on brakes to help with cornering might have something to do with the fact that our leader led us on two cool-down laps before pitting. While there’s a lot of intervention going on here to help the car corner, it somehow all works. Though we suspect a higher pace than our already elevated speeds might have turned the Type S into a bit of a handful, we managed to knock off surprisingly quick laps while still feeling in control of this 2-plus ton sedan.

A street drive reveals the TLX Type S to be far more capable than its four-cylinder stablemate. There’s enough power to keep the drive entertaining, while the 10-speed shifts seamlessly enough to not draw undue attention to itself. While road noise noticeably increases at higher speeds, the Type S remains focused enough on its underpinnings as a comfortable touring sedan to not feel abusive or excessively bumpy, with the adaptive suspension managing to smooth out most surface irregularities without feeling disconnected from the road. One aspect that works better on the track than the road are the brakes. Using an electro brake servo system — essentially brake-by-wire hardware —  derived from the NSX, the setup delivers short pedal throws which are better suited to sudden hard applications than gentler slow-downs that require progressive modulation, like when approaching a stop sign at a moderate speed. 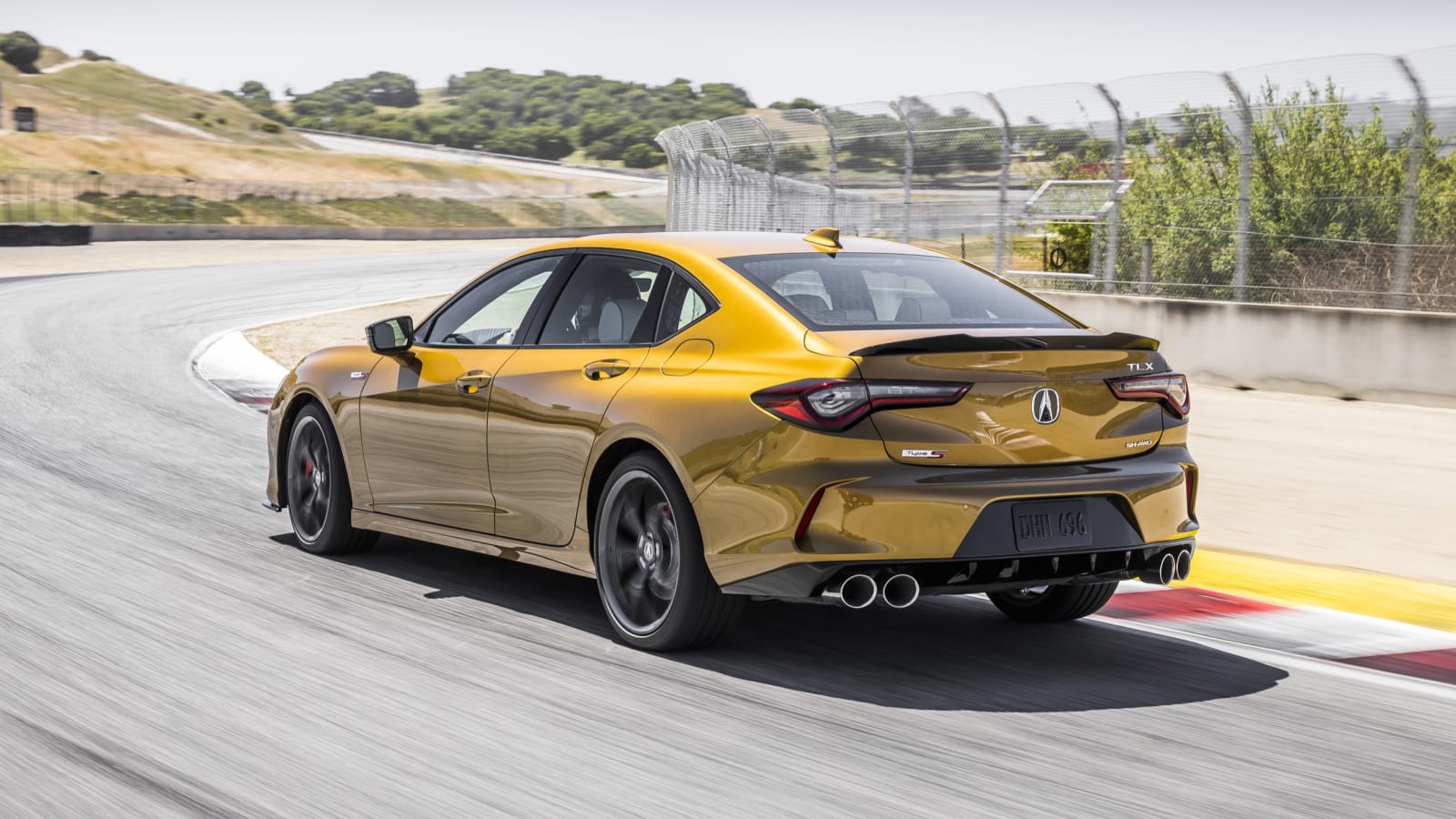 But perhaps the most telling experience came from driving a four-cylinder TLX A-Spec 350 miles from Carmel back down to Los Angeles after the press introduction. Though somewhat hampered in corners by its all-season tires, the A-Spec was comfortable and quiet enough to make the drive a pleasure, aided by the superb ELS stereo system. The 10-speed makes highway cruising easy, with the engine humming below 2,000 rpm at 80 mph in top gear. Driving the more pedestrian model at speed on local canyon roads also surprised a few friends, who were trailing in some formidable hardware: a 991.2 series Porsche 911, a first-gen Nissan GT-R, and a 996 series Porsche 911 Turbo. “That’s a four-cylinder engine?!” they marveled, illustrating how clever all-wheel drive hardware can counteract an unfavorable power-to-weight ratio.

Perhaps that experience sums up the difference between the 2021 Acura TLX Type S and more familiar players like the Audi S4, Mercedes-AMG C 43, and BMW M340i xDrive. Similar to relative newbies like the Genesis G7 , the TLX isn’t the obvious choice — Acura also probably doesn’t tick the box for those seeking fancy blue-chip name recognition. However, it does manage to surprise and delight with its unexpectedly well-executed dynamics.

For drivers less concerned with luxury car status and more interested in enjoying a healthy flog down a country road, the Type S underpromises and overdelivers thanks to its thoughtfully engineered upgrades and improvements. Even more promising? The idea of a future TLX Type R, which wasn’t ruled out when we pressed Acura about the possibility of an even more aggressive spinoff. Here’s to hoping.