The name Tiguan comes from putting the words “tiger” and “iguana” together. We’re not kidding. We mention that because it’s pretty much the only thing interesting about the 2021 Volkswagen Tiguan, a pretty sensible-shoes compact crossover that mostly blends into the background with its restrained styling, plain interior and indifferent driving experience. Yet, like sensible shoes, it also makes plenty of good sense with its plentiful feature content, simple controls, a strong warranty and enough space that there’s even room for a third row. Its standard turbocharged engine, which provides the stronger acceleration and lower fuel economy of rival optional upgrade engines, represents a rare contradictory element to the story.

It’s also ultimately a significant downside, because being the only powertrain choice means it has no hybrid or plug-in hybrid version. The top-recommended Honda CR-V and Toyota RAV4 do (plus the Ford Escape), while also offering more efficient base engines. They’re also more interesting to drive (as are most other competitors), while choices like the Mazda CX-5 and Nissan Rogue provide the sort of stylish, premium interior that VWs used to be known for. In other words, the Tiguan gets a lot right, but it could also try a lot harder. Within the VW family, the similarly sized ID.4 electric crossover is a far more distinctive, compelling choice.

Every Tiguan but the base S gets Volkswagen’s next-generation MIB3 touchscreen infotainment system. The SE trim now comes standard with adaptive cruise control, while the SEL Premium R-Line gains a standard power passenger seat. Mirroring a trend throughout the industry, the destination charge also gets a hike up to $1,195. This contributes to the Tiguan’s higher price for 2021.

Note that there will be more substantial updates made for 2022, including revised exterior styling and some new interior trimmings. 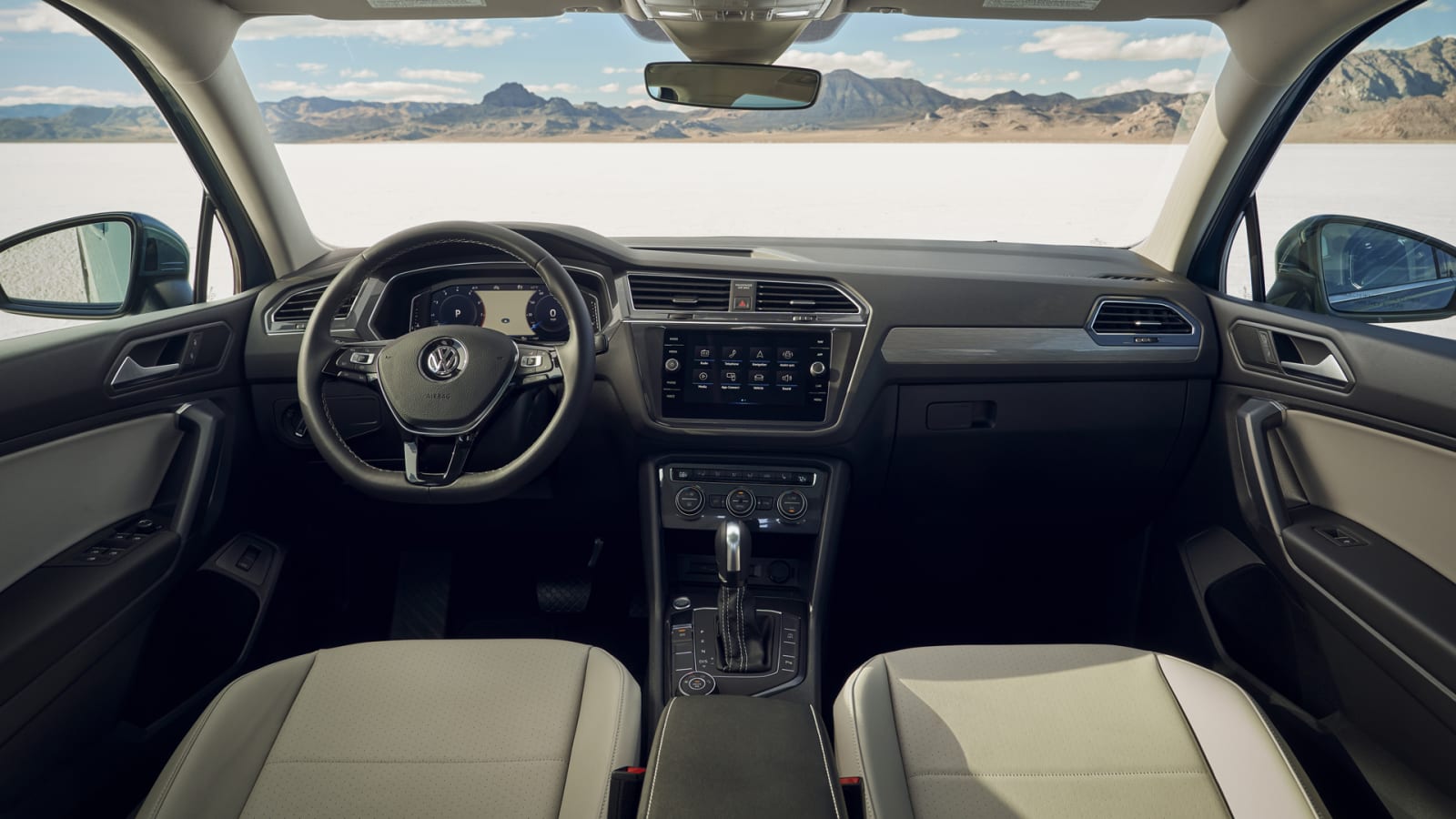 The Tiguan’s interior is designed and laid out in a similar manner as Volkswagen’s previous-generation Golf. It’s not especially stylish, and some would even call it plain. VW’s newer designs featured in the Jetta and ID.4 indicate that VW is moving the ball forward considerably. Nevertheless, everything is easy to use and find, and the materials are of a competitive quality. As expected for a crossover, the driving position is high, and visibility is phenomenal thanks to a tall roof, and low windowsills and dashboard.

Depending on trim, there are 6.5- or 8-inch touchscreens available, but the software and menu structure are similarly easy to use (though different due to the bigger screen being updated for 2021). The 8-inch screen, however, does come with touch-sensitive menu buttons around its perimeter rather than 6.5-inch unit’s conventional buttons, which we’re never in favor of. The interfaces are clean and simple, and the screen is very responsive. Apple CarPlay and Android Auto come standard. Overall, it’s one of the better systems available.

Buyers who choose a Tiguan SEL or higher will also be treated to the Volkswagen Digital Cockpit, which is basically the same all-digital instrument panel as Audi’s Virtual Cockpit. It’s a bright, high-resolution screen that’s highly attractive. It operates so smoothly you could be forgiven for thinking it had real dials, but importantly, it places infotainment displays such as the navigation map and audio information prominently in front of the driver. 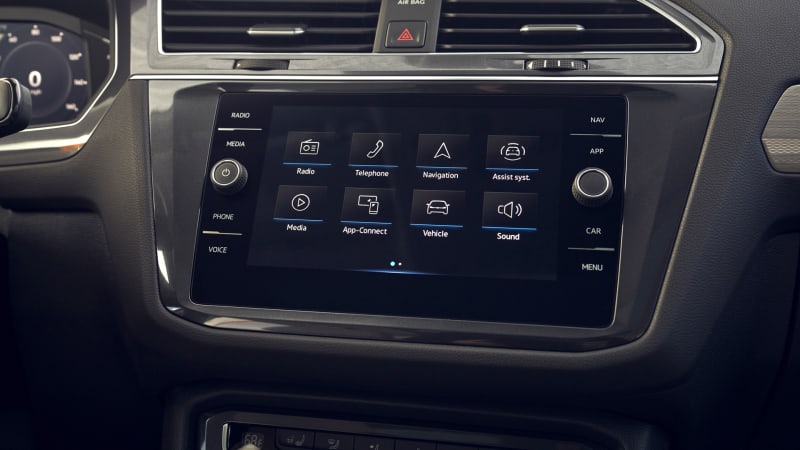 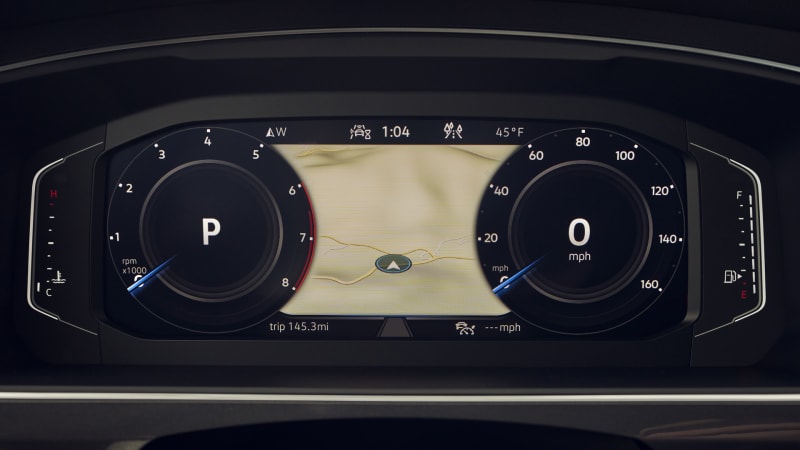 How big is the Tiguan?

The VW Tiguan is the longest “compact” crossover, and it matches that with the longest wheelbase, too. Perhaps not surprisingly, then, it’s also the heaviest in the segment. Inside, it’s a slightly different story. It’s indeed one of the most spacious in the segment and you should find more family-friendly space than in most competitors, but it’s also not a class leader in terms of rear seat or cargo room. The Honda CR-V, Nissan Rogue and 2022 Hyundai Tucson best it, while the Toyota RAV4 matches it. One Tiguan advantage, though, is the back seat’s sliding capability that lets you bring kids closer to you up front (good for wiping noses) or expanding cargo volume.

The Tiguan has another ace up its sleeve, too: a third-row seat that comes standard on all front-wheel-drive models, and is optional with all-wheel drive. Although primarily intended for children, and for infrequent use, only the Mitsubishi Outlander and the slightly larger Kia Sorento offer three rows in this general size class. Note that cargo space is reduced with the third-row seat, pictured below right. 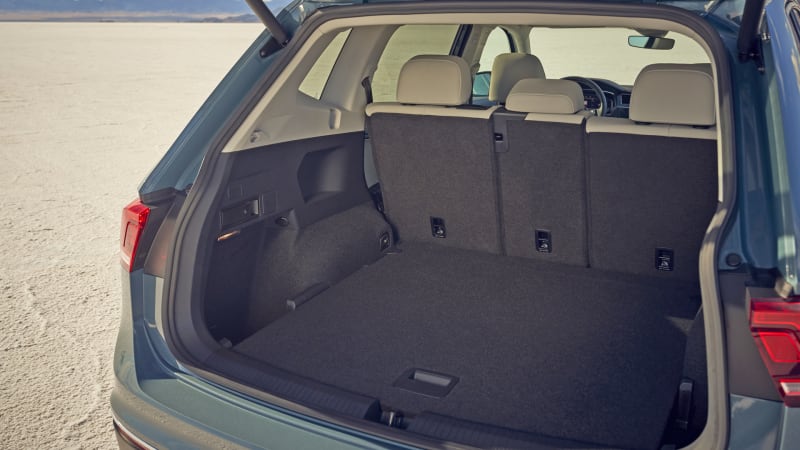 What are the Tiguan fuel economy and performance specs?

Every 2021 Tiguan comes standard with turbocharged 2.0-liter inline-four that makes 184 horsepower and a strong 221 pound-feet of torque. Power goes to an eight-speed automatic transmission. The only powertain choice is whether you want front-wheel drive or “4Motion” all-wheel drive.

The FWD Tiguan offers fuel economy numbers of 23 mpg city, 29 highway and 25 combined. The AWD Tiguan does slightly worse with 21/27/24 mpg. Those numbers are on the low side when compared to the CR-V, RAV4 and Subaru Forester, but keep in mind the Tiguan’s considerable extra torque that makes it a stronger performer. In that light, its fuel economy is about the same as the Ford Escape and Mazda CX-5‘s optional turbocharged engines.

We’re happy to report that the Tiguan drives like a big VW Golf. That’s not entirely surprising, as it shares the same MQB platform that underpins, well, almost every VW, and its engine is a close relative of the GTI’s 2.0-liter. More specifically, the Tiguan feels much lighter than its portly curb weight would suggest, which boosts confidence when hustling through corners or doing the traffic slalom. Steering is light and disagreeably numb on center, but ultimately precise. There’s also a fair amount of body roll, and the ride is on the soft side, but it feels stable and instills confidence.

Moreover, the standard Tiguan engine is equivalent to the upgrade option on some of its competitors, and provides enough power that you’ll never feel left behind by traffic. The turbo 2.0-liter is quiet at low rpm, but becomes gruff and loud when accelerating hard. It’s disappointing when the cabin is otherwise extremely quiet.

What other Volkswagen Tiguan reviews can I read?

An in-depth review of what changed for the Tiguan when it was completely redesigned, including information about its engineering and design.

How much is the 2021 VW Tiguan price and what features are available?

Pricing starts at $26,440 for the base Tiguan S, including the $1,195 destination charge. There are five trim levels: S, SE, SR R-Line Black, SEL and SEL Premium R-Line. Like Honda, these function as all-encompassing feature increases – there are no factory options besides all-wheel drive. This simplifies find a Tiguan considerably, but also increases the chances of paying for features you don’t want.

The R-Line trims stand out for their racier styling elements, but beyond that, you can find a full breakdown of the other trims’ extra features, plus specs and local pricing here on Autoblog.

All prices below include the $1,195 destination charge.

What are the Tiguan safety ratings and driver assistance features?

The National Highway Traffic Safety Administration has only subjected the Tiguan to a side crash test where it received five out of five stars. The Insurance Institute for Highway Safety named it a Top Safety Pick for its best possible crash test performance and sufficiently forward collision prevention system. Its base halogen headlights got a “Poor” rating, but the SEL trims’ LED headlights got the best-possible “Good” rating.