There’s no shortage of strong competitors in the compact car segment, meaning a car needs to make a case for itself to stand out. The 2021 Toyota Corolla does this by offering an impressive amount of variety and standard safety features, while also being stylish and a solid if not remarkable driver.

The Corolla is available as a hatchback or sedan, with a pair of gas engines and a hybrid powertrain, and it’s even available with a manual transmission for diehards. Its main weakness is that there aren’t really any versions that are particularly quick or fun to drive, such as the peppy variants from Honda, Mazda, Hyundai and Kia. You also won’t find all-wheel-drive versions like Subaru and Mazda offer. But as a sensible, feature-packed commuter with a sterling reputation for variety, it’s easy to see why the Corolla continues to be so popular. That’s it’s no longer as dull as it once was is icing on the cake.

Changes for 2021 are minor except for a couple of special edition trim levels. All Corollas now get Android Auto and automatic engine start-stop as standard. Blind-spot and rear cross-traffic warning are now standard on the XSE hatchback and sedan, as well as the XLE sedan. They’re an option on the SE hatch and sedan, and the LE sedan and hybrid. Available on all hatchbacks is an “Enhanced Cargo Space” option that swaps the spare tire for a tire repair kit and lowers the cargo floor to add 5 cubic feet (for a 23 cubic-foot total).

Both the hatchback and sedan once again offer Nightshade trims that are powered by the 2.0-liter engine and come with black exterior accents and wheels. The hatchback has an exclusive Special Edition that features a unique body kit and red paint. Only 1,200 will be made, all of which will come with a CVT. The sedan gets the Apex Edition, which is less exclusive at 6,000 units but features more equipment. In addition to a special body kit, it also gets a sports suspension and a cat-back exhaust. Particularly rare will be the manual-equipped Apex, of which only 120 will be built. 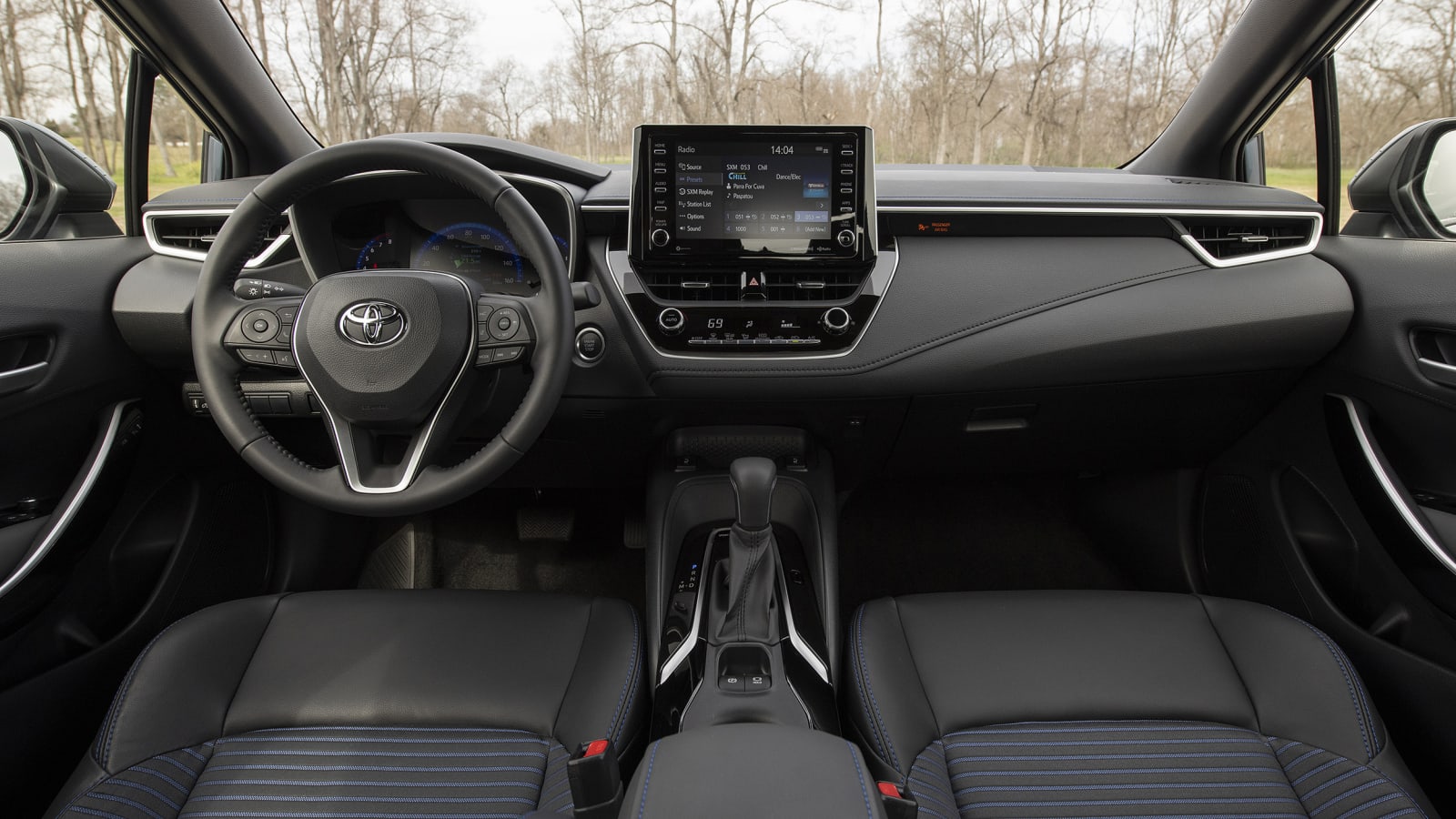 What is the Corolla’s interior and in-car technology like?

The interior in the new Corolla is not bad for the price point. The higher trim levels, especially, have quality materials and adornments like genuine stitching on the leatherette throughout the cabin. We weren’t in love with the look of the cream-colored plastic interior we saw in the Hybrid, but overall, that’s nothing to complain about, especially at this price point. Niceties including heated front seats, proximity key and push-button start, wireless smartphone charging and an upgraded JBL sound system are on offer in higher trims.

Where the Corolla truly wins is in its suite of standard and available technology. Every Corolla comes standard with Toyota Safety Sense 2.0 (more on that in a bit), in-car WiFi, as well as Apple CarPlay, Android Auto and Amazon Alexa capability. The included touchscreen interface is a mixed bag. It’s large, prominently placed and easy to reach. The menu structure is simple and basic controls for the radio, for instance, are easy to use. On the other hand, we’ve often found this system is slow in its responses and a bit rudimentary in its appearance and capability. A choice for early adopters it is not. That makes relying on the Apple CarPlay and Android Auto functionality that much more important. 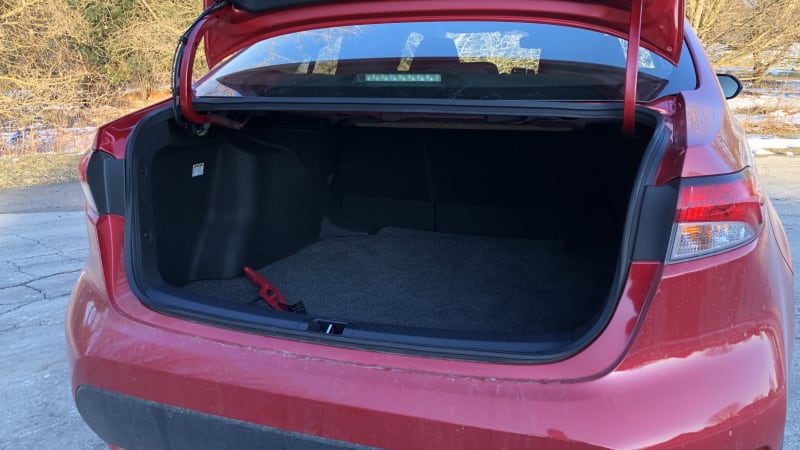 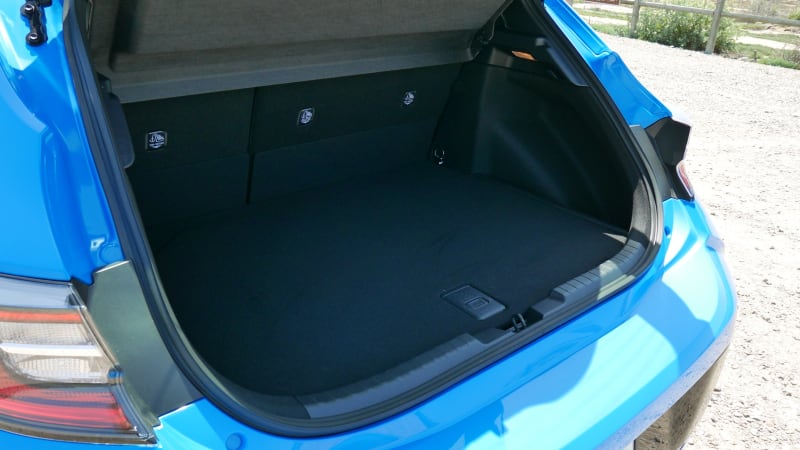 How big is the Corolla?

The sedan is 182.3 inches long with a 106.3-inch wheelbase — the same as the Honda Civic and close to the Hyundai Elantra. Overall width is 70.1 inches, and overall height is 56.5 inches. It has an interior volume of 88.6 cubic feet, with 13.1 cubic feet of trunk space, which is less than both the Elantra (14.4) and Civic (15.1). It seats five. Headroom is in short supply, and rear legroom is less than the previous generation at 41.4 inches, though it beats much of the competition, and two adults can sit comfortably in the back.

The Corolla Hatchback is even smaller at 169.9 inches long with a 103.9-inch wheelbase. Back seat room can be a pinch compared to the sedan, and although its 18.0 cubic feet of cargo space behind the second row seems reasonably competitive, in practice, it’s shockingly tiny. In particular, there’s barely enough height between the floor and cargo cover to fit a paper grocery bag. That’s why the new “Enhanced Cargo Space” option for 2021: you lose the spare tire, but the 5 cubic-feet it gains can be a game changers. Either way, unlike most hatchbacks, this one is actually less versatile than the sedan.

The non-hybrid 2021 Toyota Corolla is available with two engine options. One is a 1.8-liter carryover from the previous generation, available in the L, LE and XLE trim levels. It provides 139 horsepower and 126 pound-feet of torque. It’s paired with a continuously variable automatic transmission (CVT) that features a physical first gear for smoother launches. L and LE trims have EPA estimates of 30 mpg city, 38 highway and 33 combined, while the XLE is rated at 29/37/32 mpg.

A new offering for the 2021 model year is an all-new 2.0-liter four-cylinder engine good for 169 hp and 151 lb-ft. In the S trim level, it is offered with either a CVT or a six-speed manual. The SE CVT gets 31 mpg city, 40 highway and 34 combined, while the SE 6MT gets 29/36/32 mpg. The XSE sees the 2.0-liter paired only to the CVT for 31/38/34 mpg. The Apex with a CVT gets 31/38/34 mpg and the manual version gets 28/31/36. With either transmission, this new engine is a great fit for the Corolla, providing a good amount of power and fuel economy with little fuss or effort, but the manual-equipped version is the most entertaining.

The Corolla Hybrid features a version of the 1.8-liter four-cylinder engine assisted by a battery pack and a 53-kW electric motor. It offers an adequate 121 peak hp, which doesn’t make this a fast car — though it can easily keep up with the flow of traffic — but makes it effortlessly efficient. We had no trouble exceeding its estimates of 53 mpg city, 52 highway and 52 combined. That’s the same combined rating as the Toyota Prius, if you’re keeping score.

The new Corolla feels more refined and responsive from behind the wheel, and the addition of a 2.0-liter option only serves to make the driving experience better, especially if you tend to pass and lead rather than follow along in traffic. While the CVT does cause the engine to groan when pushed, using the paddle shifters to simulate shifts helps to avoid that, if you care enough to make the extra effort. The manual transmission allows you to make the most of the available power and had us appreciating the smoothness of this new engine. The transmission’s automatic rev-match feature is something usually found in sports cars, but makes for smoother and easier manual driving.

The Hybrid is impressively quiet, with a little tire noise and a faint engine rumble under acceleration. It offers Normal, Eco and Power modes to allow you to cater the powertrain’s response to your needs or whims.

The suspension has been upgraded to a multi-link setup for the latest generation of Corolla, which helps to make this car feel well sorted in corners, and keeps things calm on rougher roads. The steering is above average, and we’ve actually had fun driving the Corolla, especially the hatchback, which is not something we’ve often said previously about a Corolla, if ever.

In all, the Corolla is also pretty quiet and definitely a very easy car to drive, whether you’re a long-time commuter or a first-time driver. Having the standard suite of active-safety equipment helps build confidence, even for the most attentive pilots. Furthermore, the Corolla’s relatively small size makes it easy to navigate through heavy traffic or park in a crowded lot.

The Corolla Apex tries to be sporty and is somewhat successful, but at the cost of many of the standard Corolla’s positives. It has almost no body roll, but it has an objectionably firm and bumpy ride. The throaty exhaust makes it sound droney and buzzy, particularly with the CVT, which is found in nearly every Apex. That exhaust doesn’t add any extra power, either, which is an issue when even regular Honda Civics and Mazda3s make more power for less money. Meanwhile, the steering is unchanged and feels slow for a sporty car, and the CVT is not eager to be driven hard.

What more can I read about the new Toyota Corolla?

Toyota’s attempt at a sporty Corolla isn’t fun enough to make up for its compromises. It’s also expensive.

2019 Toyota Corolla vs. compact hatchbacks: How they compare

We examine how the Corolla’s specifications stack up against the competition. 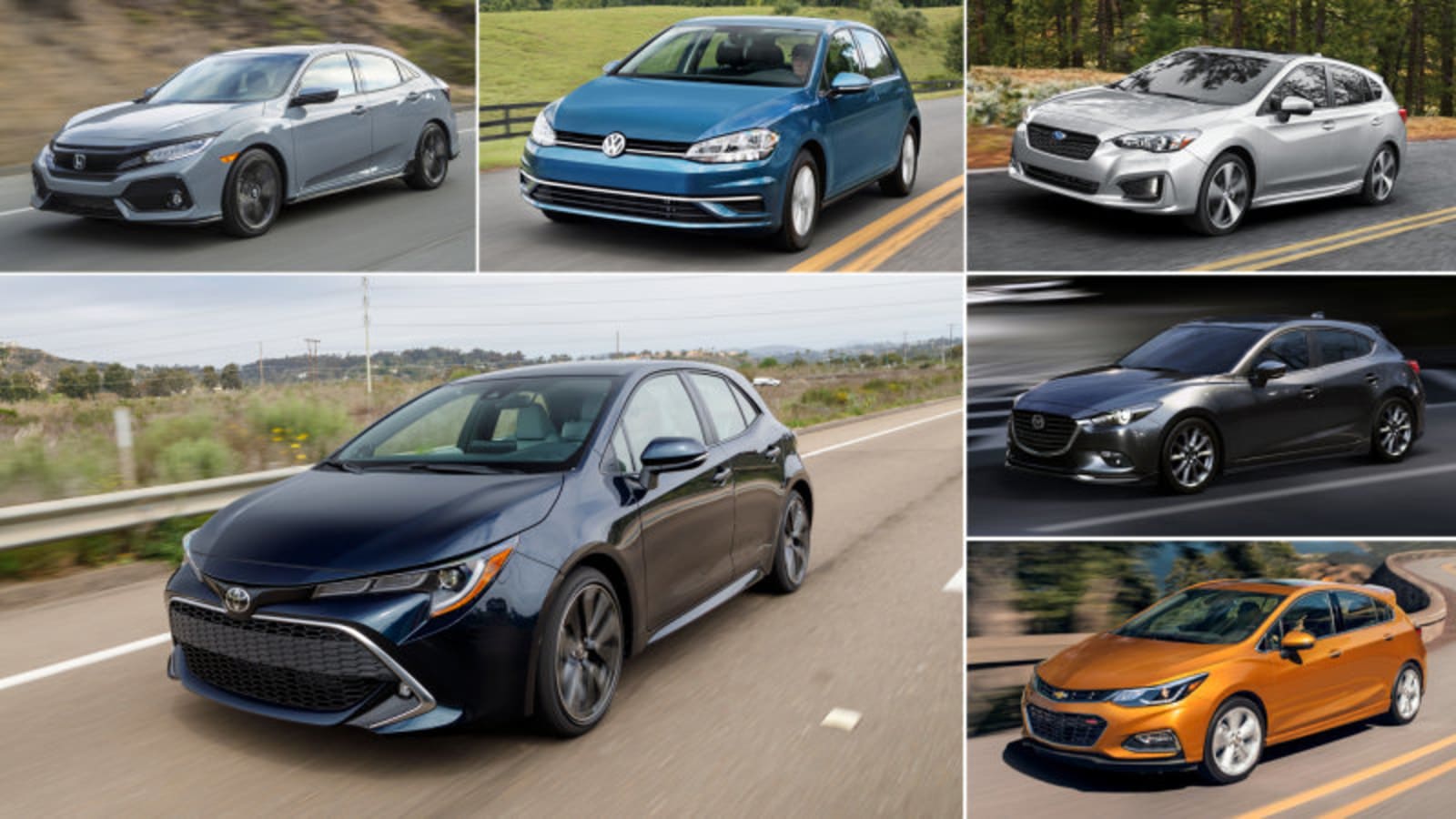 What features are available and what’s the Corolla’s price?

All the models with an “L” in the trim level come with the 1.8-liter engine. To get the more powerful 2.0-liter engine, you’ll need to spring for the SE or XSE. Only the SE is available with a manual transmission, while all other models are paired with a CVT. Base prices for all models are listed below, and you can find more information on pricing and features on Autoblog at the following links for the sedan, the hatchback, and the hybrid.

In addition to the usual airbags and stability systems, the Corolla comes standard with Toyota Safety Sense 2.0, which includes a forward collision warning with pedestrian detection, full-speed adaptive cruise control, lane-keeping assist and road edge detection, automatic high beams, and road sign assist. We’ve found this feature suite to work quite well, it takes a lot of the stress out of driving in traffic, and it’s impressive that this is available as standard in an entry-level sedan. It also has a backup camera an available blind-spot monitor and adaptive front lighting.

The IIHS has rated both the Corolla hatchback and sedan as a Top Safety Pick, with crashworthiness ratings of “Good” in every category, “Superior” crash avoidance and mitigation, “Acceptable” for headlights and “Good +” for ease of use for child-seat anchors. NHTSA gives all Corolla models a five-star rating overall, with five-star ratings in each crash test. For the rollover resistance test, it gets four stars.