ANN ARBOR, Mich. — The all-electric Taycan is a fantastic first step for Porsche into an electric future. Now in its second model year, it has seen both acclaim and sales success, and for good reason. The Taycan 4S on up to the very hottest Turbo S are able to feel distinctly Porsche. But until now, there have been two things missing from the formula: rear-wheel drive and some semblance of affordability. The 4S, Turbo and Turbo S all have all-wheel drive, as well as price tags starting north of $100,000. The new model year changes that with the base 2021 Porsche Taycan, period, no alphanumeric or “Turbo” appendage. The name is simple. Pure.

The base Taycan might be able to tickle an itch for purists. For someone who prefers the traditional feel of a rear-wheel-drive sports car — as one might eschew any 911 with a 4 designation — there’s now a Taycan for you. Even better, it starts at $81,250 (after destination fees but before a $7,500 federal tax credit or any local incentives). This base Taycan lowers the barrier to entry by $23,900 compared to the Taycan 4S.

Without a motor driving the front wheels, power is down compared to the AWD stablemates. Equipped with the standard, 79.2-kilowatt-hour Performance Battery, power comes in at 321 nominal horsepower, 402 peak horsepower using launch control, and 254 pound-feet of torque. It can also charge at up to 225 kW at a capable DC fast charger, which only Tesla can currently beat. Range is still unannounced as of this writing, but whatever it is will probably be understated. 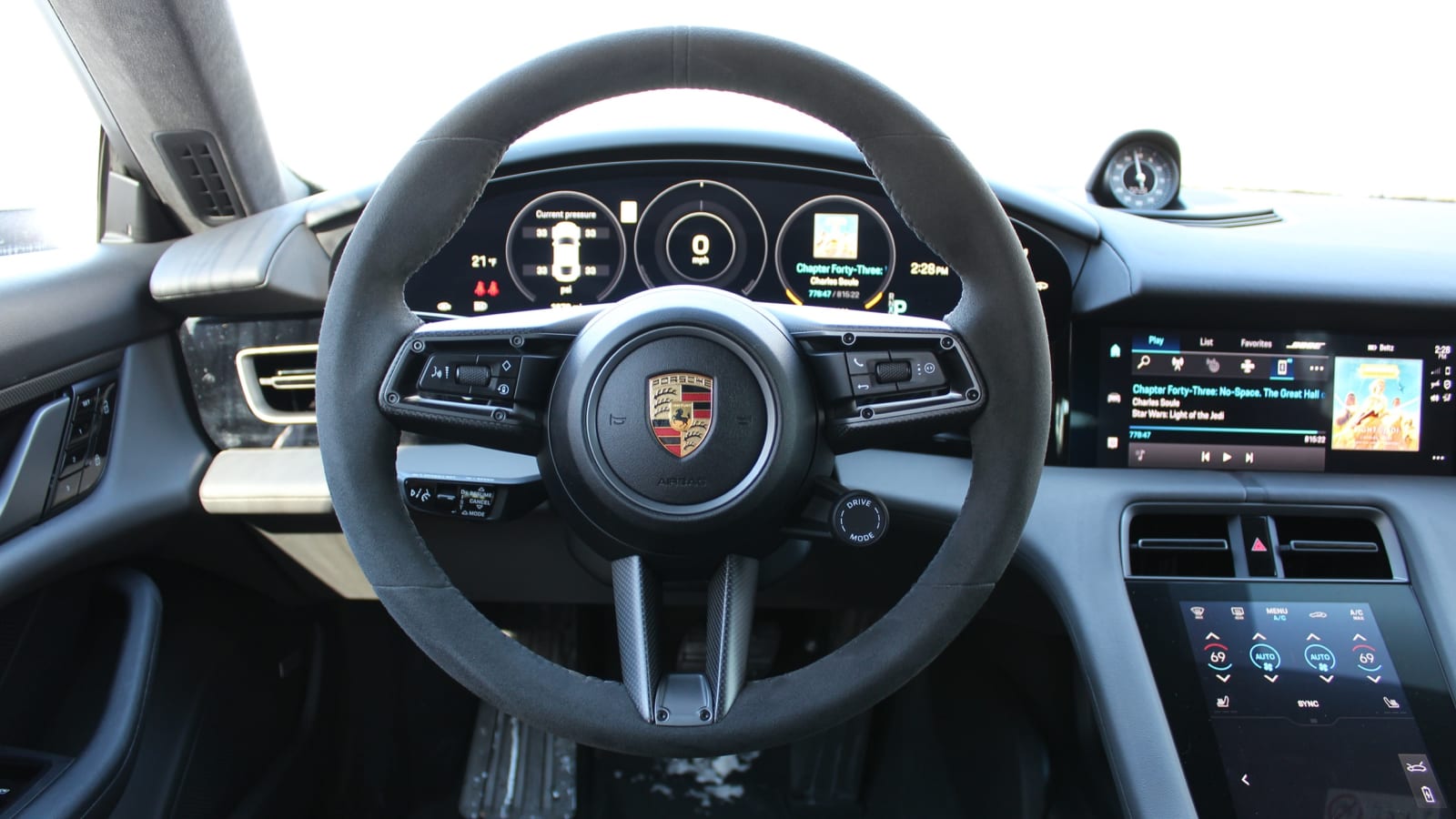 So sure, this base Taycan is down on power, but it’s still potent and punchy. In fact, Porsche notes the Taycan is the most powerful base version of a car it has ever sold. It’s quiet, but it pounces with the swiftness of a jungle cat when prompted. With loads of torque available from low in the rev range, the Taycan will kick you in the small of the back when you jam your foot down from a stop — or from 20 mph, or from a 40-mph cruise. Even at highway speeds, it comes to life to slingshot you past traffic, though the tummy-turning effects are dulled at the high end.

The various modes include (from mildest to hottest) Range, Normal, Sport and Sport Plus. There’s also an Individual mode that lets you pick and choose your own settings. Normal and Sport are fairly straightforward. Range noticeably deadens the accelerator response, prioritizes climate control efficiency and puts the suspension in its lowest setting. Sport Plus, though, is the one that caters to your ears as well as your sense of motion. Its “Sport Sound” adds a bassline to the high-pitched whine of the electric motors, giving one the sense they’re piloting the muscle-car version of a UFO.

It’s easy to forget that the Taycan, unlike most electric vehicles, has a two-speed gearbox at the rear axle. Under most driving, it’s imperceptible in both sound and feel. At least, that is, until you put it in Sport Plus mode. A few times during our drive, when slowing down past 60 mph or so, we could hear the sound of a crisp downshift. It’s easy to think it’s just a completely fabricated simulation, but then you remember that, yes, the Taycan does indeed downshift, and it’s an aural treat when it does.

We were a little concerned that all the power going just to the rear wheels could make for a suboptimal first drive considering we’d received a couple inches of fresh snow overnight to add to the few inches that had already accumulated. That, plus the well-below-freezing temperatures, could have meant this would get sideways at the mere thought of hitting the right pedal. Thankfully, our tester came with its wheels swaddled in Pirelli P Zero Winter rubber, and Porsche’s stability control management was similarly up to the task. 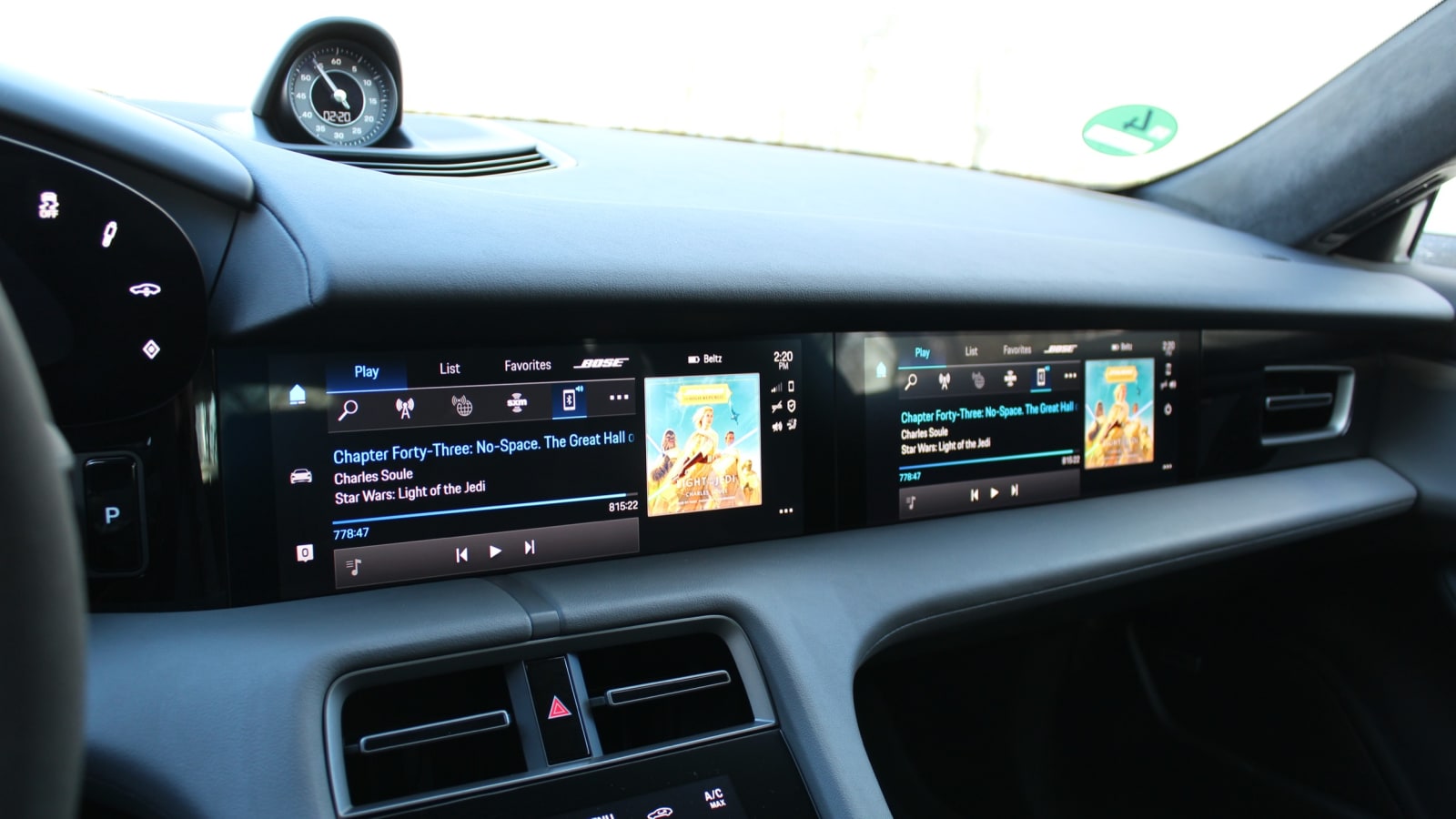 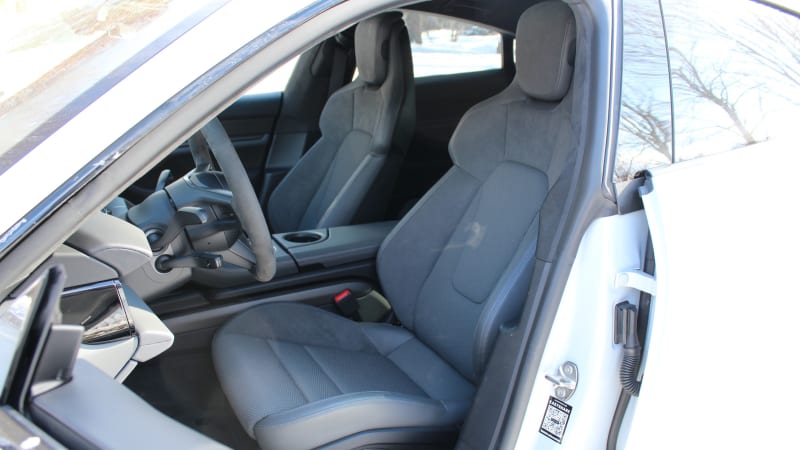 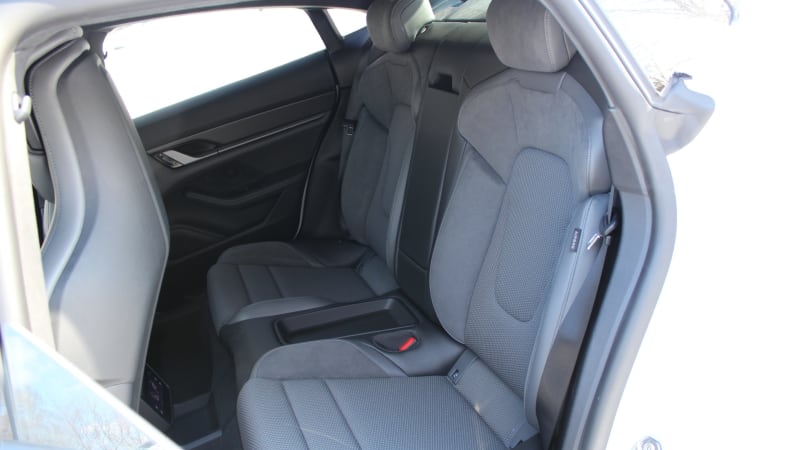 With all the nannies engaged, the rear-drive Taycan does a decent impression of an all-wheel-drive car. In normal driving, as well as some blasts down some of our favorite country curves, the difference is imperceptible There’s still a little giddy loosening in tight, fast corners without the front wheels pulling the nose around the bend, but the electronics do keep the car from getting too wily, even in snow. Of course, stability on snow comes at the sacrifice of the speed you could muster with the traction of an AWD vehicle, but it’s simply difficult to get the Taycan to misbehave. Normally.

That doesn’t mean there’s no opportunity for hooning. Toward the end of our time with the Taycan, we found an empty, unplowed parking lot, and pulled in. We thought it a good sign when we didn’t get stuck, so we poked off the traction control with a long press of the button on the dash. Then we enjoyed the pure thrill of a baker’s dozen of all-electric powdered donuts.

Now, there are obviously a few situations where the Taycan’s drivetrain makes a practical difference. Say, if you absolutely need to drift, this base Taycan is the one to get. Or, if you live in the Snow Belt, AWD is going to provide that extra confidence when it’s really coming down. Otherwise, what’s really different here isn’t some great question of handling. It boils down to power and price. If you can forego blistering speed and make do with mere exciting acceleration, you’ve just saved yourself multiple tens of thousands of dollars. 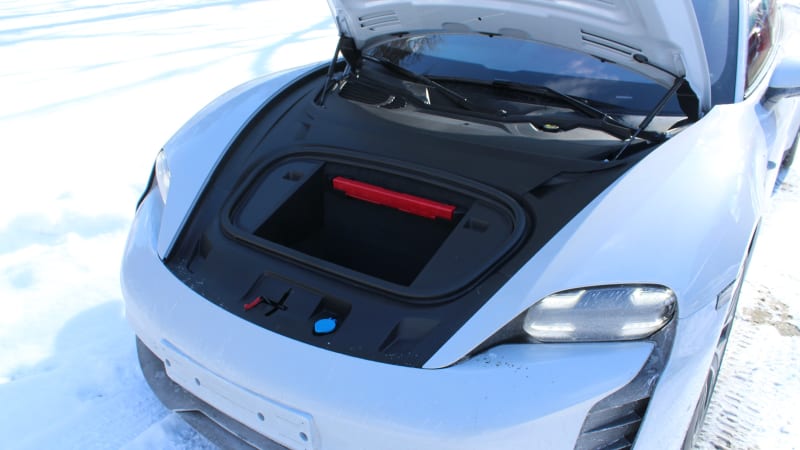 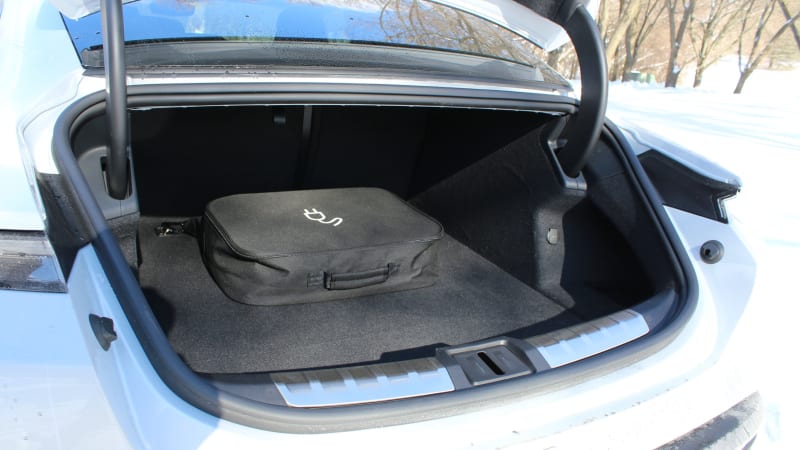 That’s not to say you can’t spend more on your base Taycan. There is still a wealth of available options – it’s still a Porsche after all. Our tester had the bigger battery, 21-inch wheels, the Sport Chrono package, upgraded suspension, brakes, torque vectoring and climate control, a Bose sound system, passenger infotainment display, and more. There are myriad visual options you can choose in the configurator, from the color of the model designation to upholstery material to ambient lighting. Heck, even any paint color other than black or white will cost you extra. Trying to recreate our Euro-spec tester in Porsche’s configurator brought the price well past that of even the $104,825 Taycan 4S before we gave up the seemingly endless box-checking.

But, the important thing is you can — and should — get in for well under $100,000. If you’re picking the base Taycan for the sake of purity, are you really going to opt for the ionizer ($350) or deep pile floor mats with Race-Tex edging ($1,070)? No. You’re going to get in your clean, meagerly equipped Taycan and, if you’re lucky, find an empty parking lot for some rear-wheel-drive electric snow donuts.