Nissan created a schtick that stuck to the Maxima back in 1989. The car was marketed and sold in North America as the 4DSC, which is an abbreviation for “four-door sports car.” There was a 4DSC sticker on the window and everything. Whether it lived up to the name is up for considerable debate. For some historical perspective, MotorWeek’s review of the car when it was new saw it hit 60 mph in 8.2 seconds. The car’s propensity for significant body roll was brought up more than once. Neither of those sound like laudable sports car qualities, but regardless, the 4DSC branding inevitably comes up in any Maxima discussion.

One reason for that is Nissan’s continued use of the four-door sports car slogan. It hasn’t been around as long as BMW’s “Ultimate Driving Machine,” but it’s definitely one of the older ones at this point, with more than 30 years spanning its first and most recent usage. That said, the Maxima name itself is even older.

“Maxima” was first spelled out on the back of a Datsun 810 for the 1981 model year, with the model’s full name being the Datsun 810 Maxima. This model transitioned into being named the Datsun Maxima one year later, and then Nissan Maxima after the official Datsun-to-Nissan switchover. Nissan’s second-gen Maxima hit the road in 1985, lasting four years. It was the third generation in 1989 that was crowned the 4DSC Maxima. Throughout the ’90s, it saw its greatest success as Nissan’s midsize sedan entry, but when the Altima started to fill that slot, the Maxima was pushed upmarket. Each generation of this century went on to adopt a slightly different concept than the one that came before.

So that’s 40 years of Maxima, distilled, and now there’s a car to ring in the culmination and celebration of those decades: the 2021 Nissan Maxima 40th Anniversary Edition. It’s a sharp-looking sedan in modern sheetmetal. Sharp enough (and perhaps intriguing enough) that the car’s reveal was one of Autoblog’s most-read stories last fall. We’re not entirely sure why. Just know that the internet isn’t always logical. Seeing the rabid interest, we figured we’d better get one of these into the fleet for testing to satisfy all of our apparently Maxima-hungry readers. You’re welcome. 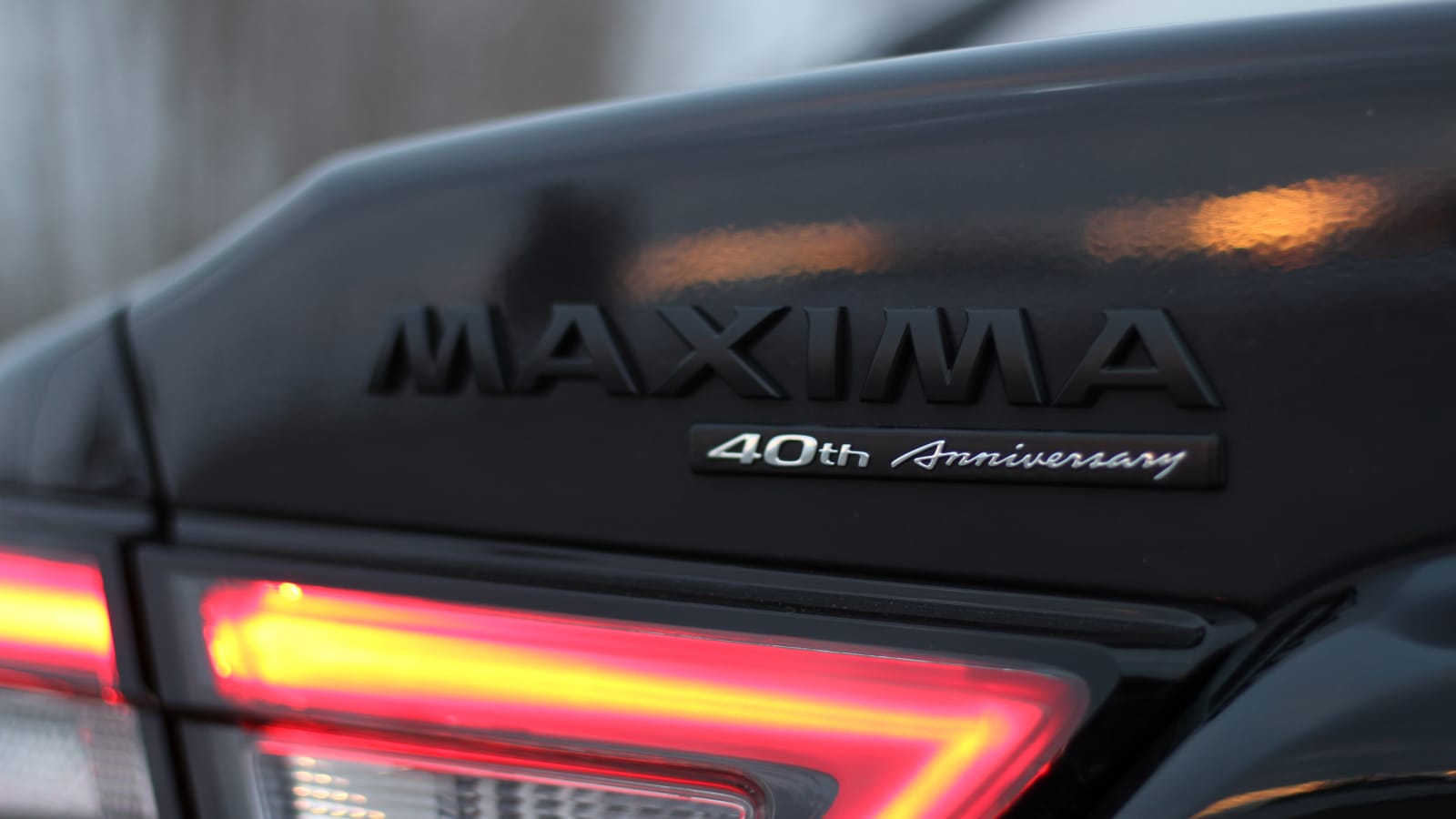 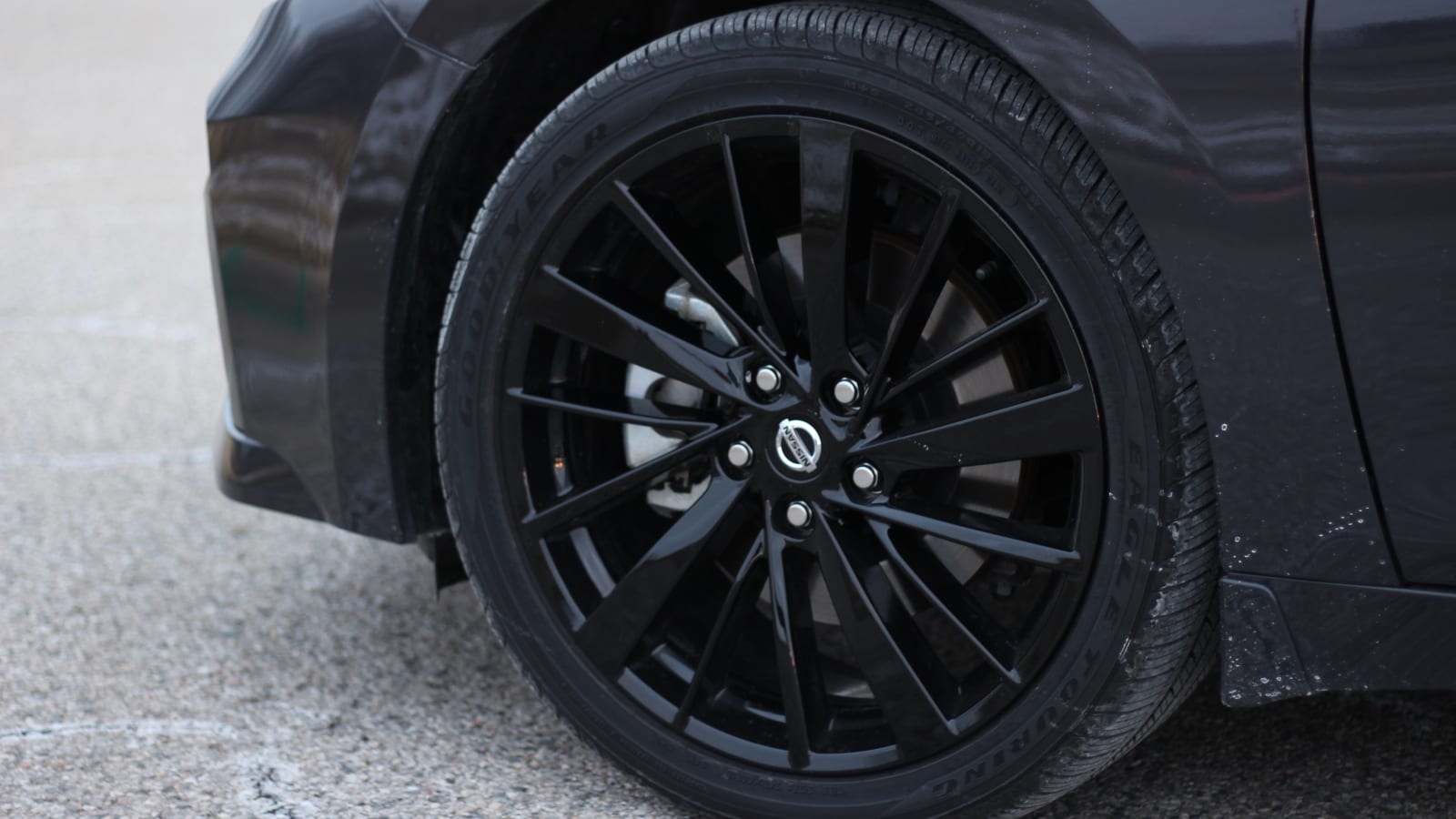 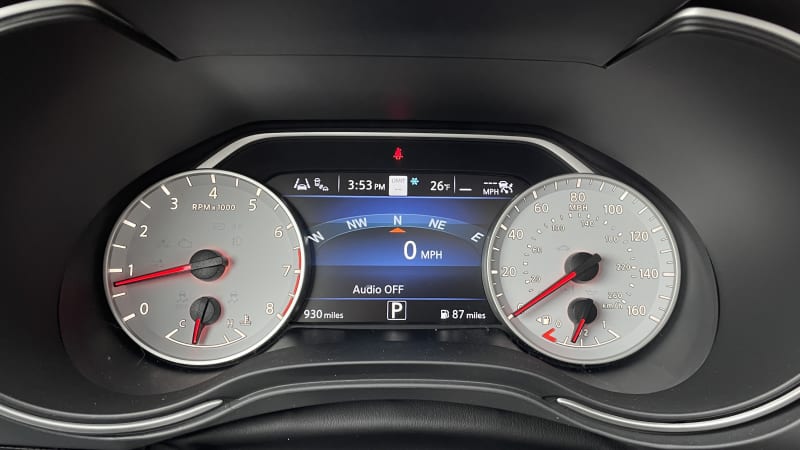 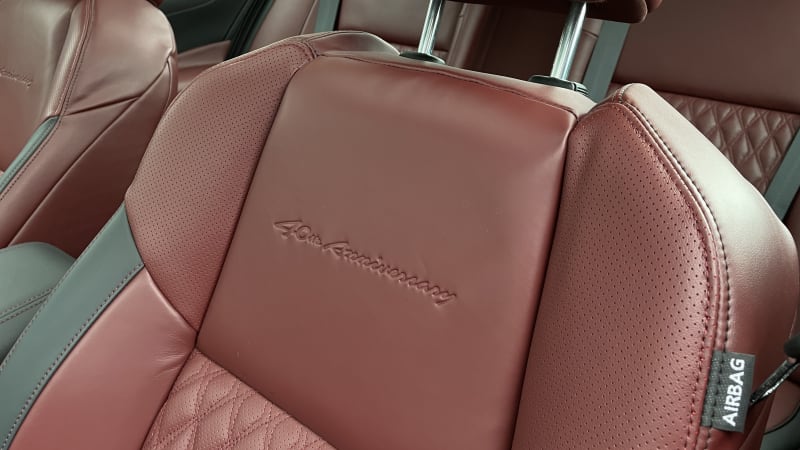 The 40th Anniversary Edition model essentially boils down to a comprehensive appearance package. Like most special-edition cars these days, this one leans heavily into the dark trim theme. Its stealthy and exclusive Ruby Slate Gray Pearl paint is combined with a black roof and black 19-inch wheels. The two shades of darkness play well off each other, and they work with the Maxima’s general design aesthetic. Black trim is used where gaudy chrome was before, though there is curiously still a single strip of shiny trim used to mark the bottom window line. A 40th Anniversary badge finishes the exterior job up nicely. It’s an upgrade over the standard Maxima as a whole, which is a stylish car from the outset.

This package really hits its stride once you open the door. Dark red semi-aniline leather graces the doors and comfortable seats (embossed with the 40th Anniversary logo), and red stitching is used throughout the cabin. It’s genuinely luxurious in look and execution, and comes off as a thoughtful, contrasting effort to balance the exterior’s darkness. White-faced speedometer and tachometer gauges are added as an homage to those in Maximas past — including that 4DSC in the MotorWeek review. It’s a lovely touch, and their functionality and visibility isn’t reduced as a result of their retro aesthetic. The worst part of the interior are the “satin dark chrome” faceted interior finishers Nissan uses as trim. They are horrendously cheap-looking, and they feel the part, too.

There are no mechanical changes to speak of with the 40th Anniversary Edition. That means it’s still trudging onward with a 3.5-liter V6 mated to a CVT that sends all power to the front wheels. A throwback to the manual transmission days would’ve been lovely, but that will remain a fever dream. Output from the engine is sufficient at 300 horsepower and 261 pound-feet of torque. It’s enough to spin the front wheels up from any stop, which is a testament to how quickly the CVT is capable of launching you forward. And how much this car would benefit from the option of all-wheel drive. 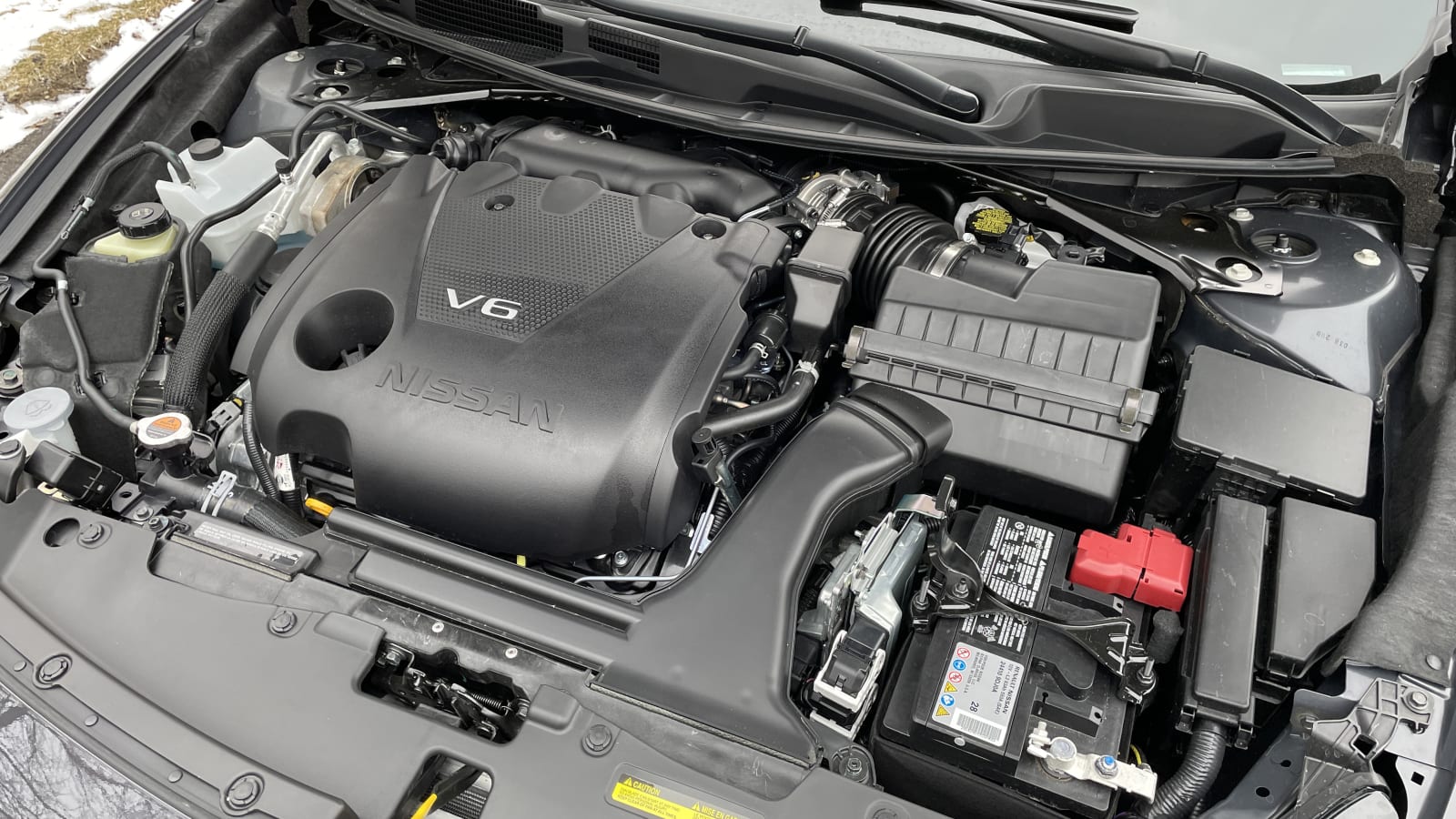 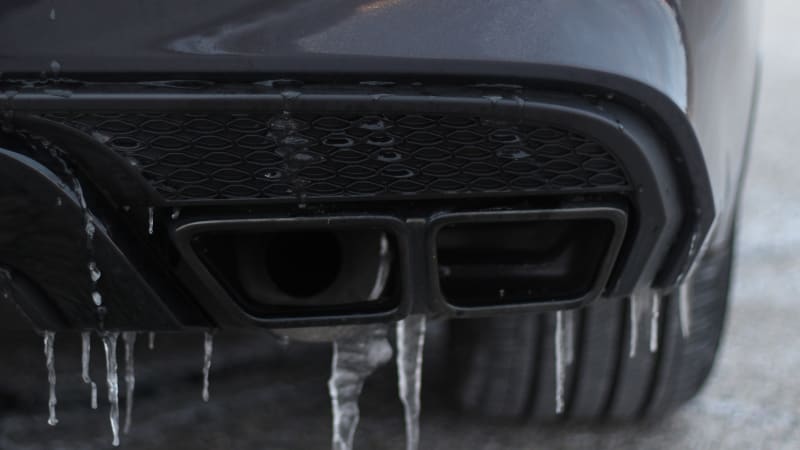 The 5.7-second zero-to-60 mph time is a lot quicker these days than the 8.2 seconds it took in 1989. Neither is excessively slow for its era, but neither is especially quick, either. The Maxima’s CVT bounces about the upper rev range when you have it pinned with simulated “shifts.” Acceleration is still super smooth with nary a pause in forward momentum, and the V6 produces a semi-enticing growl that is augmented through the speakers.

Driving the Maxima like a sports car (as Nissan’s marketing would suggest you can do) has its ups and downs. The transmission is fickle in Sport mode, keeping the revs up where they should be occasionally, but then randomly dropping them down super low intermittently. It’s a frustrating experience. Putting it in “Manual” mode lets the driver resolve the issue, but there are no paddle shifters, and the slap-shift gear lever is oriented in the wrong direction — it should be pull back for upshift, and push forward for downshift.

The chassis is a bright spot, as the Maxima strikes a lovely balance between handling ability and road comfort. Nissan’s fixed damper technology is much less exciting than the sonar road-scanning adaptive suspension of the 1989 Maxima (how cool is that?), but it gets the job done. Body motions are kept in check as you’d expect in a sedan with a performance slant. Unfortunately, the hydraulic-electric steering system ruins much of the good that this chassis is doing. It has a numb, floaty feeling off-center that musses up the initial turn-in feel, creating a disconnect between the wheels and what you’re doing with your hands. Putting it in Sport mode helps correct this with a heavier weight to the wheel, but it’s still ever-present and off-putting. The strangeness in the steering is even a bit concerning for everyday driving, as gently arcing onto on-ramps or other gentle curves results in the same disconnect.

Eating up highway miles is where the Maxima is in its element. It’s well-insulated to road noise and wind buffeting, plus the suspension is compliant over rough surfaces. Just as we posited in our first drive review a couple of years ago, the Maxima is still more 4DGT (four-door grand tourer) than 4DSC. In that way, the current Maxima isn’t all that different from the old. And with pricing that pushes it into luxury territory — this 40th Anniversary Edition starts at $45,295 — it faces the same issue that more recent Maxima generations have dealt with.

It may have a nicer cabin, more standard power and sleeker styling than various cheaper midsize sedans, including the Altima, but it still carries a non-luxury badge and does not compare favorably in numerous practical regards. For instance, the much-cheaper midsize Honda Accord has more cargo space and backseat room (there’s plenty of legroom in the Maxima, but anyone approaching 6 feet will find their heads in the roof). The Accord also drives far better than the Maxima does, offers more tech and safety features, and is stylish in its own way. At the same time, similarly priced sedans like the Acura TLX and Lexus ES outdo the Maxima in various ways while wearing actual luxury badges.

Perhaps not surprisingly, Maxima sales dropped considerably since moving upmarket, averaging only about 56,000 units between 2005 and 2018. For comparison, Nissan moved 109,000 back in 1989 and peaked at 163,000 in 1994. Then in 2020, things really fell off a cliff as only 18,000 found homes. When folks can scoop up a well-equipped Murano or Pathfinder for the same money as a Maxima, they tend to do that these days. Perhaps nothing can save any sedan, then, but at least the Maxima could have a better chance at succeeding if it made a more credible case as a four-door sports car. As it is, anybody who wants a fun, big sedan is much better off with an Accord 2.0T, Mazda6 Turbo, or newly available, the Kia K5 GT.

Spending more than $40,000 on this 40th Anniversary Edition is tough no matter what perspective you see it from. It’s great that Nissan is still trying to make the Maxima work here when so many others have packed up their sedans and left, but unless it gets a full re-think soon, the 4DSC is difficult to recommend.