Airlines meet with Biden officials to push for green-fuel breaks

This is why Acura hasn't yet announced its EV strategy

It seems like compact luxury SUVs are multiplying like rabbits, with new choices constantly popping up with various new takes on the segment. With this constant churn, one might think that the Mercedes GLC-Class is starting to show its age and be less competitive as a result. After all, it dates back to 2016. In this case, however, the GLC was so well-executed from the beginning that it continues to be a top choice. Even its thorough update last year largely just ensured that its features and technology kept up with newer Mercedes models (most notably the GLB).

Although most buyers are likely to take home the well-rounded 2021 Mercedes-Benz GLC 300, there are nevertheless a multitude of variations. There’s the GLC 350e plug-in hybrid and two high-performance AMG models: the AMG 43 and AMG 63. All but the hybrid are also available in the GLC Coupe body style. This variety can really only be matched by the BMW X3/X4, and in general, we think the Mercedes’ style inside and out give it an edge. Now, with so many choices in the segment, it’s still smart to take a long look around, but whatever you do, don’t let the GLC’s shelf life put you off.

After a comprehensive mid-life update last year, the GLC carries over unchanged for ’21. It does add a few noteworthy standard features, though: rear cross-traffic warning, automated parking and proximity entry with push-button start (Keyless-Go). The GLC 63 now comes standard with a surround-view parking camera. 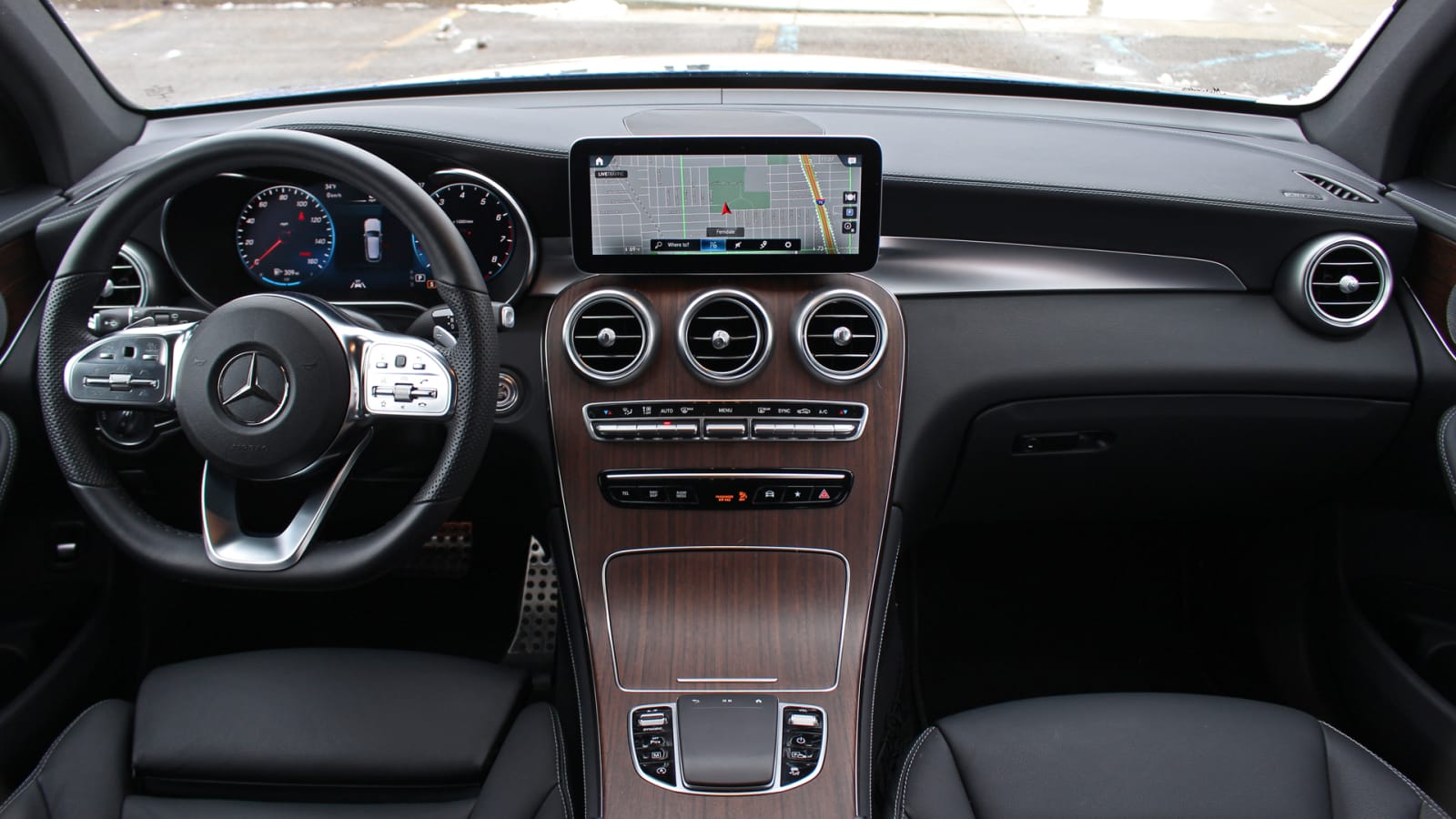 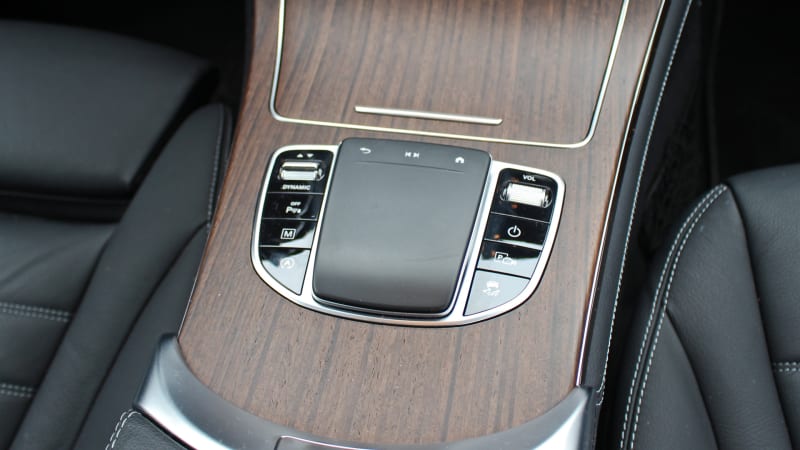 It may not have the current Mercedes aesthetic on display in the new GLB-Class, but newer doesn’t necessarily mean better. In this case, just different. The GLC cabin remains special with its broad, waterfall-like center console of real wood trim, high-end switchgear and snazzy rotary airvents. Materials quality is excellent. The standard MBTex vinyl upholstery will fool your friends into thinking it’s the real stuff – distinctively, you can even get it in colorful hues. The AMG models add Dynamica faux suede upholstery and red seatbelts, but like every GLC, you can upgrade to real leather.

Standard on every GLC is the MBUX tech interface. The central display measures 10.25 inches and the instrument panel can be upgraded from its traditional gauge pack (speedo, tach, trip computer) to an all-digital 12.3-inch display. Supporting them are MBUX’s multitude of inputs: center console touchpad, touchscreen, steering wheel track pads and natural speed recognition voice controls. We generally appreciate such redundancy, but the touchpad isn’t as functional as a control wheel and the voice commands don’t work particularly well. The system in general is also awfully complex as there’s so much available to control and options to tweak to your preferences. We’d highly recommend trying it out thoroughly during a test drive (as you should with all tech interfaces). GLC top and above left; GLC Coupe above right.

How big is the GLC?

The GLC is one of the smaller “compact” luxury crossovers. It’s as wide as most competitors, but it’s a few inches shorter overall, which can mostly be seen in its diminished cargo space. Although we’ve found Mercedes is short-changing the GLC’s cargo capacity (the official spec is so low it’s not even worth noting here), it still can’t hold quite as much as a Volvo XC60 or Acura RDX (or the smaller-yet-boxier Mercedes GLB).

On the upside, the GLC has a longer wheelbase than all of those, and as a result, boasts a competitive back seat. In back-to-back testing, we found a bit more legroom in the RDX and XC60, but it was basically equal to the X3 and Q5. Head- and shoulder room are comparable all around.

Note that there’s also a Mercedes-Benz GLC Coupe, which is effectively the GLC reviewed here but with a sloped roofline that reduces rear headroom and cargo capacity. You can see the differences in their cargo areas above with the Coupe pictured on the right.

There are four powertrains available for the GLC-Class, all of which are indicated with the different model names.

Finally, there’s the GLC 350e 4Matic plug-in hybrid. It produces a total combined output of 315 hp and 516 lb-ft of torque. Its 0-60 time is an estimated 5.6 seconds. EPA figures for ’21 weren’t available at the time of this writing, but the 2020 version was estimated to go 22 miles on a charge with an 68 mile-per-gallon-equivalent rating.

Although it’s now been around a while, the GLC remains one of the most refined and well-executed vehicles in its segment. There’s a solidity and poise to the way it moves down the road, ably swallowing up bumps yet maintaining composure around corners, feeling more like a C-Class hatchback than a small SUV. Its steering is communicative, quick and fluid in its motion with weighting that feels natural. Throttle and brake response are excellent as well. In short, it drives like a proper modern Mercedes, not a small SUV slapped together using bits and pieces from other vehicles.

The vast majority of GLC buyers will end up with the GLC 300, which means you’ll get a smooth and powerful turbocharged four-cylinder. Admittedly, it exists in a segment rife with smooth-and-powerful turbo-fours, so it’s not like it represents any great advantage.

The other GLCs are a different matter. We have yet to drive the plug-in hybrid GLC 350e, but we suspect that like the Volvo XC60 Recharge and Audi Q5 PHEV, its combination of more power and all-electric range (not to mention hefty tax incentives) mean you should give it serious consideration. On the other end of the spectrum there’s the mighty AMG GLC 63, which you can fully read about in our first drive review. Its fire-breathing V8 flies in rarified air with the Porsche Macan Turbo, Jaguar F-Pace SVR and Alfa Romeo Stelvio Quadrifoglio. They’re all bonkers-powerful with astonishing performance capability for compact SUVs.

The more reasonable upgrade is the AMG 43. It sharpens the GLC’s reflexes and makes the ride firmer courtesy changes to the suspension (which can be further upgraded with air springs). Its acceleration is a substantial improvement over the base GLC, but it’s also not absurd overkill like the 63. There aren’t many competitors at its performance level or price, either, but against a BMW X3 M40i or Audi SQ5, the GLC 43 could easily be chosen as pick of the litter.

What more can I read about the Mercedes GLC?

Our first drive in the new GLC 300 highlights in-depth all the changes for 2020.

Experience the mightiest GLC, also updated for 2020. Read this for more info about the GLC 63 S Coupe.

More in-depth information about what’s new for the plug-in hybrid GLC, including its improved performance and electric range. We load up the GLC’s cargo area with luggage and discover that it can haul far more than its meager specs imply. 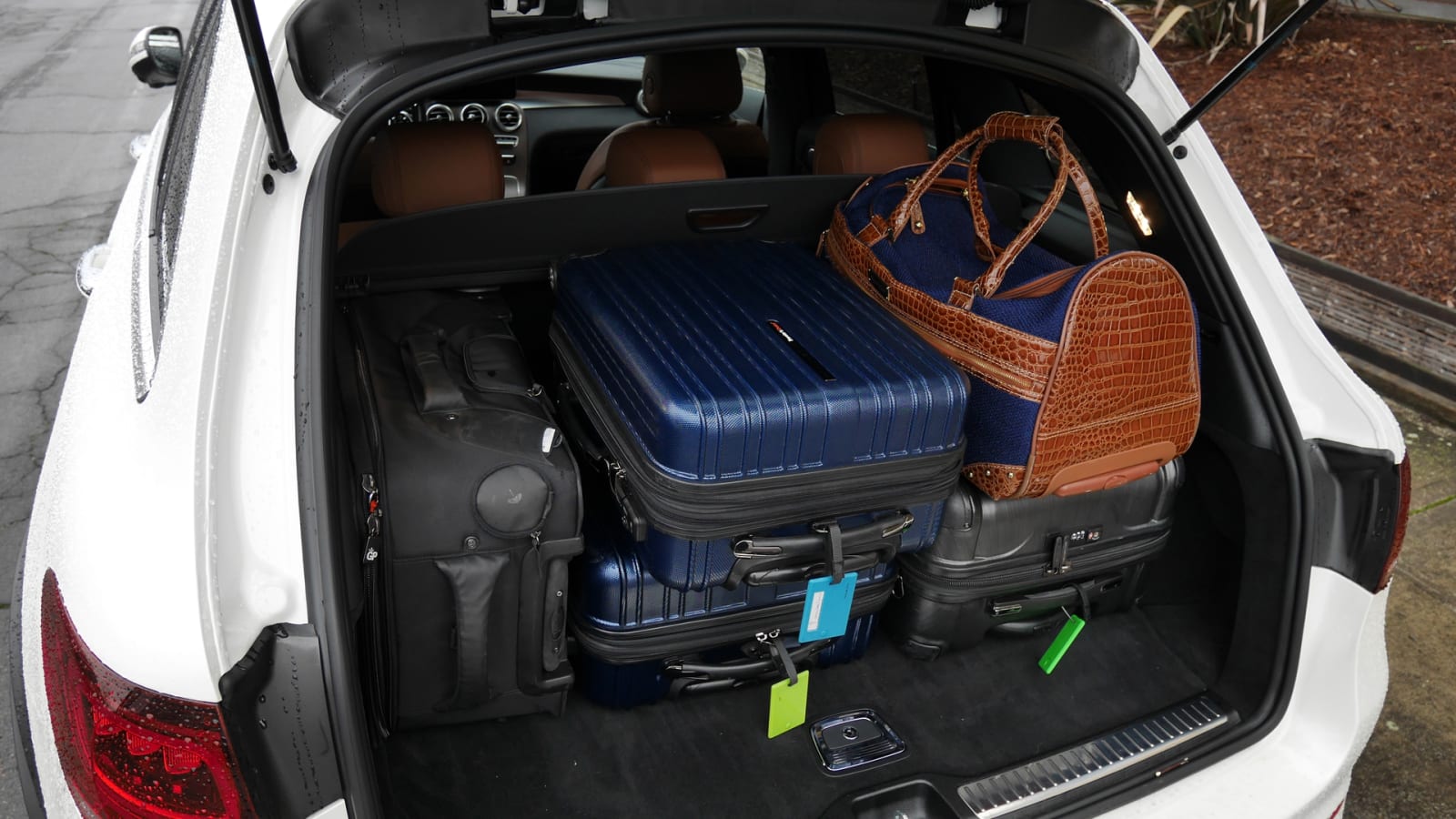 Two editors go for back-to-back drives in the top compact luxury crossovers. The GLC does very well. (Note, that each vehicle has been updated since this was written, most notably the GLC and Q5, but our conclusions would remain broadly unchanged.) 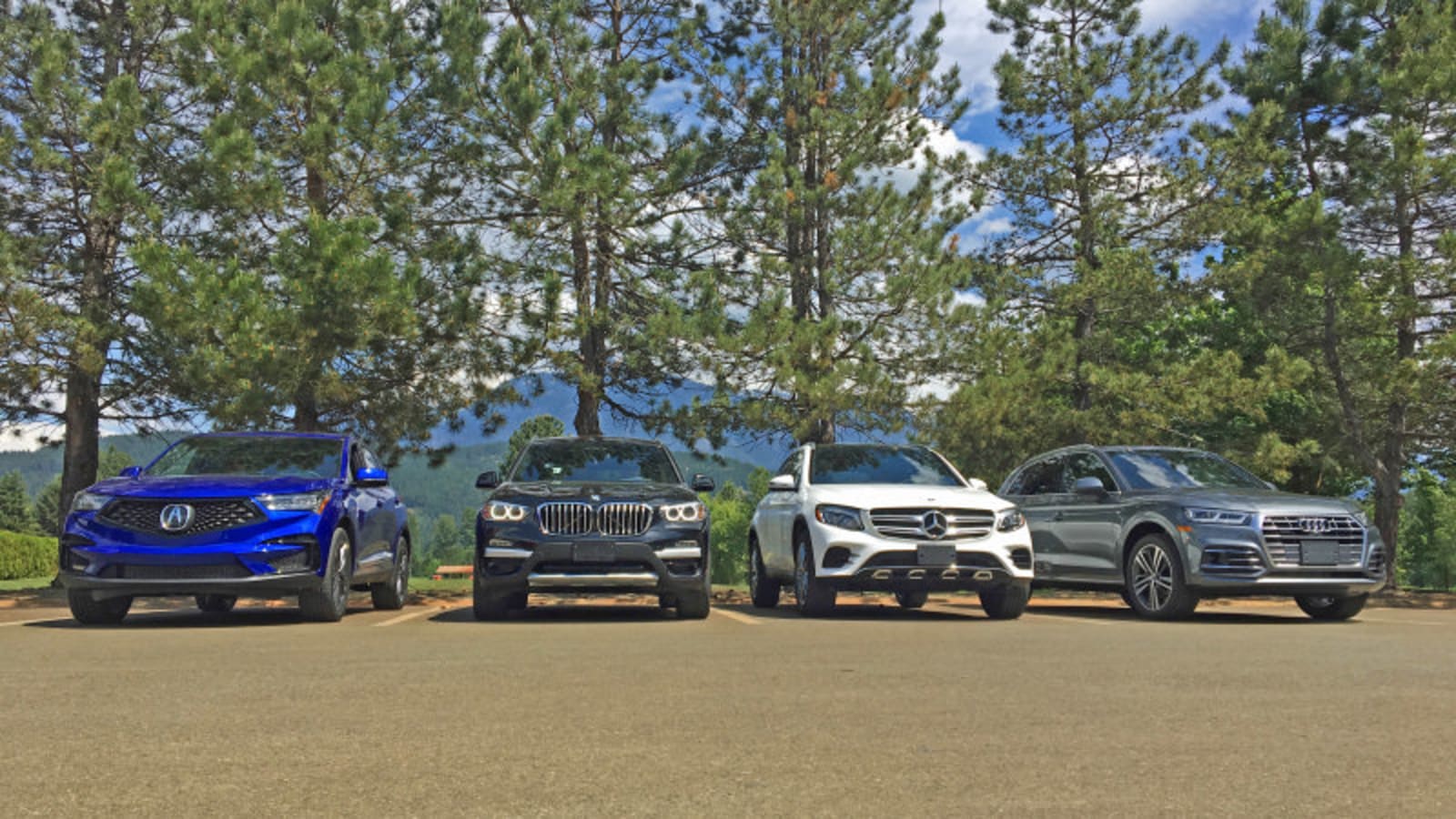 Pricing is broken down into the five GLC-Class models: GLC 300, GLC 300 4Matic, GLC 350e plug-in hybrid, AMG GLC 43 and AMG GLC 63. All but the hybrid are then available with the Coupe body style, which carries a hefty price premium, especially for the GLC 300 version.

There are far too many options and packages to list here (including those included in the AMG models), so to dig deeper, you can find all the GLC-Class features, specs and local pricing by following the links below. All the prices include the $995 destination charge.

The GLC 350e plug-in hybrid was not priced at the time of this writing, but we don’t expect a significant increase from last year’s $52,895. Also keep in mind that it’s eligible for a $6,462 federal tax credit with additional state credits possible.

Then there are the extra features (many of which are unique) included in the $1,700 Driver Assistance package. These include evasive steering assist and higher speed thresholds for the forward collision avoidance system, active steering intervention for the blind-spot system, a cross-traffic automatic braking system, lane keeping assist and one of the most advanced adaptive cruise control systems on the market that can operate in stop-and-go traffic, do most of the steering (you have to keep a token hand on the wheel) and can even automatically adjust your speed based on speed limit signs and input from the navigation system. We find the latter element overly HAL 9000, and although buried in submenus, we thankfully managed to turn it off for regular human-set adaptive cruise. Everything else, though, are extremely well-executed driving aids/tech that are worth the extra cash.

In government crash testing, the GLC got a perfect five stars for overall, frontal and side crash tests. It was also named a Top Safety Pick by the Insurance Institute for Highway Safety.