ANN ARBOR, Mich. — Looking at the 2021 Lexus ES sedan, one couldn’t be faulted for thinking it unchanged from the previous model year. There is a significant new element, however, with Lexus offering an all-wheel-drive ES for the first time. The ES 250 AWD is a bone tossed to customers living in the Snow Belt, many of whom find the confidence of all-wheel drive an easier investment than a set of snow tires for their front-drive vehicle. With our first drive of the new AWD model, we’d have the opportunity to take it on a long trip to Northern Michigan and, as luck would have it, a terrific storm was headed our way complete with snow and bone-chilling temperatures. Aside from pushing lateral grip and balance to its limits on a race track — and, really, who tracks their ES? — it seemed the perfect opportunity to test the ES lineup’s newest improvement.

The new feature comes with a caveat, though, which could be a deal-breaker for fans of the ES 350’s 3.5-liter V6: All-wheel drive can only be had in the also-new-for-2021 ES 250 designation, which indicates the sedan’s naturally aspirated, 2.5-liter four-cylinder engine. Unlike the I-4 in the ES 300h — ‘h’ standing for ‘hybrid’ — the 250’s mill doesn’t come linked to any electric motors. The engine and drivetrain go hand in hand. You can only get all-wheel drive with the I-4, and you can only get the non-hybrid four with all-wheel drive.

Interestingly enough, the ES 250 AWD costs exactly as much as the V6-powered ES 350 in each of its trim levels. Both start at $41,025, and go up from there. If all that sounds familiar, perhaps it’s because the mechanically related Toyota Avalon has the same price and drivetrain situation going on. It too is locked into the combinations of FWD/V6 and AWD/I-4, with equal price tags for both and for ultimately the same reason: the also-related Toyota Camry AWD. Because of the minuscule numbers the V6-powered Camry sells in, Toyota saw no need to invest in engineering the all-wheel-drive system to work with a V6. And since the lower-volume Avalon and Lexus ES are really only getting AWD because it can be essentially pulled off a shelf and plugged into the TNGA platform shared by all three, well, that’s how you end up with this unusual ES 350 and ES 250 AWD situation. 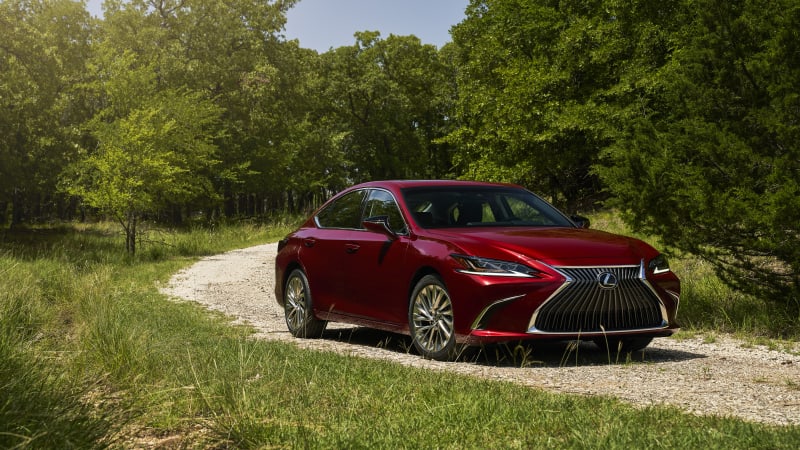 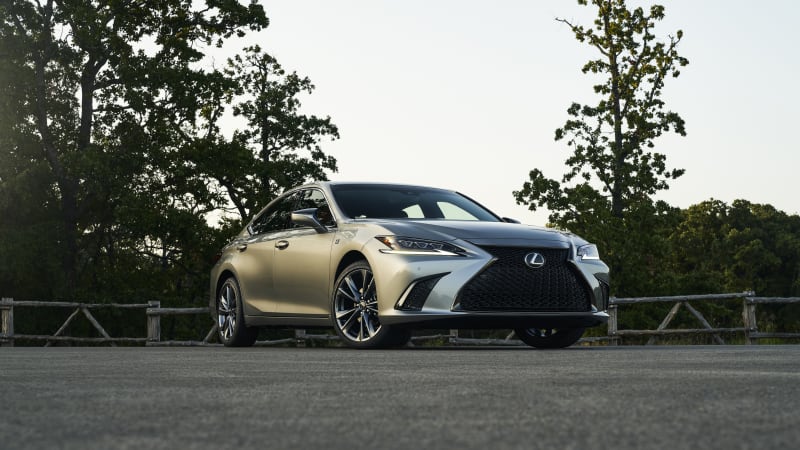 AWD isn’t the only thing you gain in trade from the sacrifice, though the other consolation prize is nearly negligible. The ES 250 is rated at 25 mpg city, 34 highway and 28 combined. Compared to the ES 350’s 22/32/26 mpg rating, you’d have to put a lot of miles on your ES before you’d likely notice the fuel savings’ impact on your bank account.

Once you shake the hp-vs.-mpg tradeoff equation out of your head and look at the ES 250 AWD on its own, the naturally aspirated four isn’t all that bad. It feels a little sluggish the first couple times you get on the gas, but you get used to it quickly. In town on wet and snowy roads, we weren’t subject to launches delayed by the stability-control system searching for traction. The AWD system, which can direct as much as 50% of torque to the rear wheels, meant the ES happily marched forth without complaint or suspect wiggling. Meanwhile, the eight-speed automatic transmission kept the revs in the appropriate range. 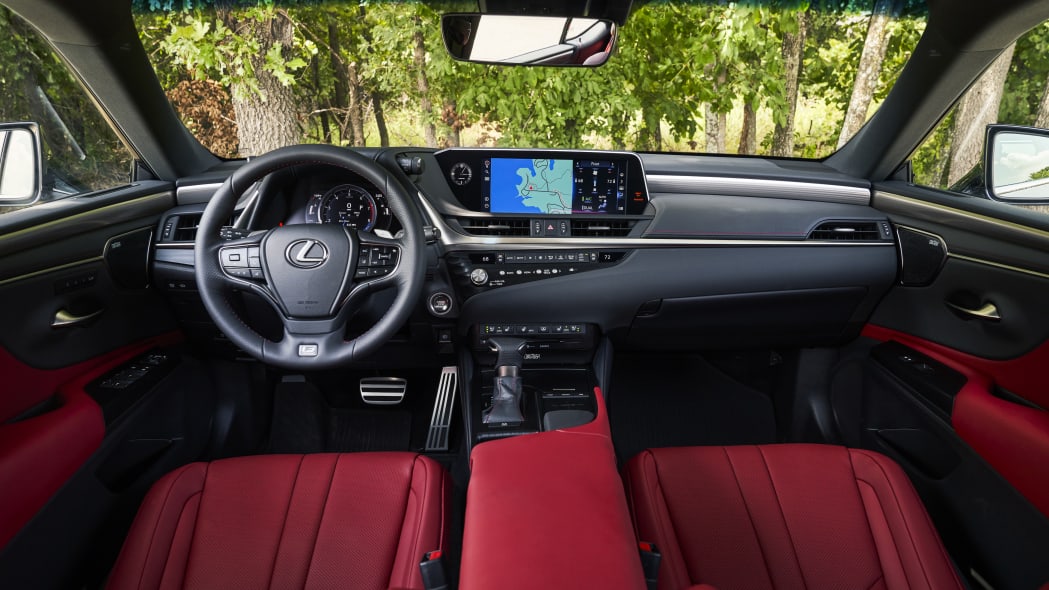 On our long drive up north, we didn’t have second thoughts about passing slower vehicles on two-lane highways the way we did in our many trips with our long-term Subaru Forester. The Lexus even felt sure-footed crossing the still-snowy lane markers at full highway speed. Really, the only thing that kept us from traversing some of the unplowed roads as snow reached several inches in depth was the sedan’s lack of ground clearance, but we were happy to follow in the tracks blazed through drifts by my wife’s small crossover down the gravel lanes terminating at our cottage.

And it really was a pleasant trip. Even with the F Sport trim’s sportier suspension tuning and larger, 19-inch wheels, the ride was remarkably smooth. It was quiet, too, making for easy conversation with my son in the back seat, and helping us to clearly comprehend the audiobook we played to pass the time. Adaptive cruise control worked well when we used it, although on multilane highways even the closest setting left a gap large enough to encourage others drivers to fill it — a minor nitpick not unique to this trim, model or brand.

While we liked the look and layout of the infotainment screen and its menus, the Lexus Remote Touch touchpad on the center console is not always the easiest interface to use. The ES does not get the touchscreen functionality added to the RX and LS. Thankfully, many of the audio controls are repeated with hard buttons both on the center stack and the steering wheel to take some of that pain away. We had no issues with the Bluetooth connection, and the wireless phone charger was a welcome touch. We especially liked the location of the charging pad, inside the center console, keeping the phone both secure and free from the temptation of distraction. 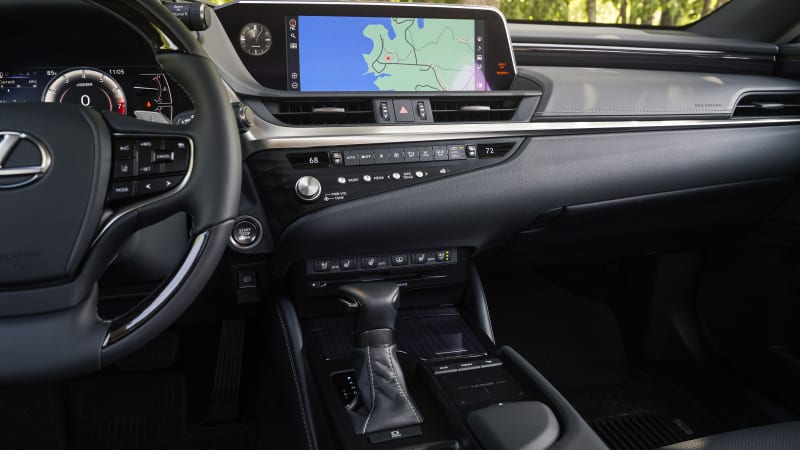 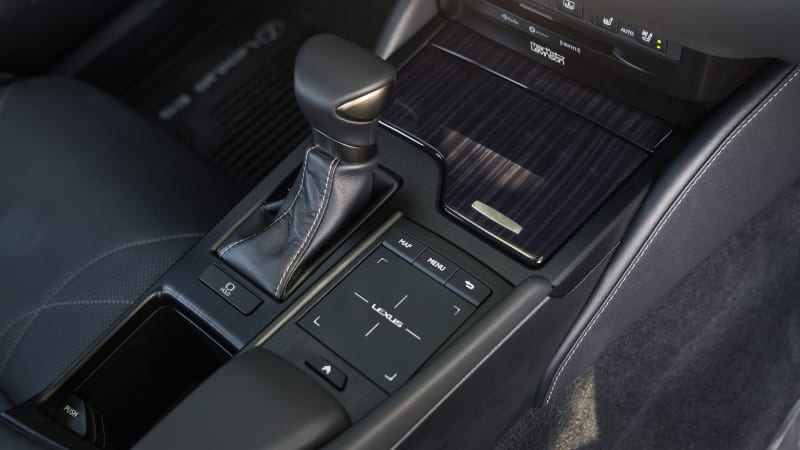 So, back to that tradeoff of about 100 horsepower and 2 seconds from 0-60 for the peace of mind of all-wheel drive plus a couple extra mpg. Do you drive in the snow or on slippery pavement a lot? Do you really care about power? If you answer no to either question, your choice is easy either way. But if, like us, your answer to both is yes, it’s tricky, and the tradeoff is something you’ll have wrestle with. In this test, we found the 203 hp of the ES 250 AWD to be perfectly agreeable, and mostly didn’t miss the extra oomph here. Of course, not everyone will agree. If only there were something that could sweeten the lower-power AWD deal — like, say, an actual, noticeable improvement in fuel economy.

Toyota — and, by extension, Lexus — has an excellent solution at its disposal in its e-AWD technology. We’ve tried it out in the Prius, and it works quite well with a negligible sacrifice in fuel economy. It’s a clever system, in which the electric motor driving the rear wheels can disengage when not needed in order to save fuel, much as the coupling on the rear axle in this all-wheel-drive but all-gas-powered Lexus can disconnect to the same end.