To understand the 2021 Kia K5 GT, think of it as a front-wheel-drive Dodge Charger Scat Pack. It’s an immature, OK-handling, affordable performance sedan that burns rubber like it wants to shake its Pirellis right off the rims. Kia might eschew some of the fundamentals of a good performance car with the K5 GT, but just like the Charger, this sedan unleashes your inner child in ways you never thought possible given its humble beginnings as the Optima replacement.

What is a K5 GT, you ask? We weren’t totally sure what it was before slipping behind the wheel, either. Kia isn’t exactly running around talking up this four-door sedan. It gets passing mention in the broader K5 press kit on Kia’s media-facing website, and you have to dig deep into the consumer site to find a slideshow of Kia casually claiming their sedan is better than a base BMW 3 Series in every measurable way. That’s some casual flexing.

Kia has the specs and mechanicals to back up some of what it’s saying. Power comes courtesy of a new 2.5-liter turbocharged four-cylinder that pumps out a strong 290 horsepower and 311 pound-feet of torque. This comes hooked up to an also-new eight-speed dual-clutch transmission, and trust us when we say this DCT is nothing like the pedestrian ones found in other Hyundai-Kia products like the Elantra N Line or Forte GT — it’s several steps better. A 0-60 mph time of 5.7 seconds is possible via an actual launch-control system.

What’s missing is just as important as what Kia stuffed into this car. There’s no trick limited-slip differential to keep those front wheels under control. Neither is there torque vectoring to help you slither through corners with all that power. With no systems in place to rein in that 311 pound-feet of torque, the front wheels run roughshod. We’re talking torque steer, which depending on how you look at it, is either good or bad. 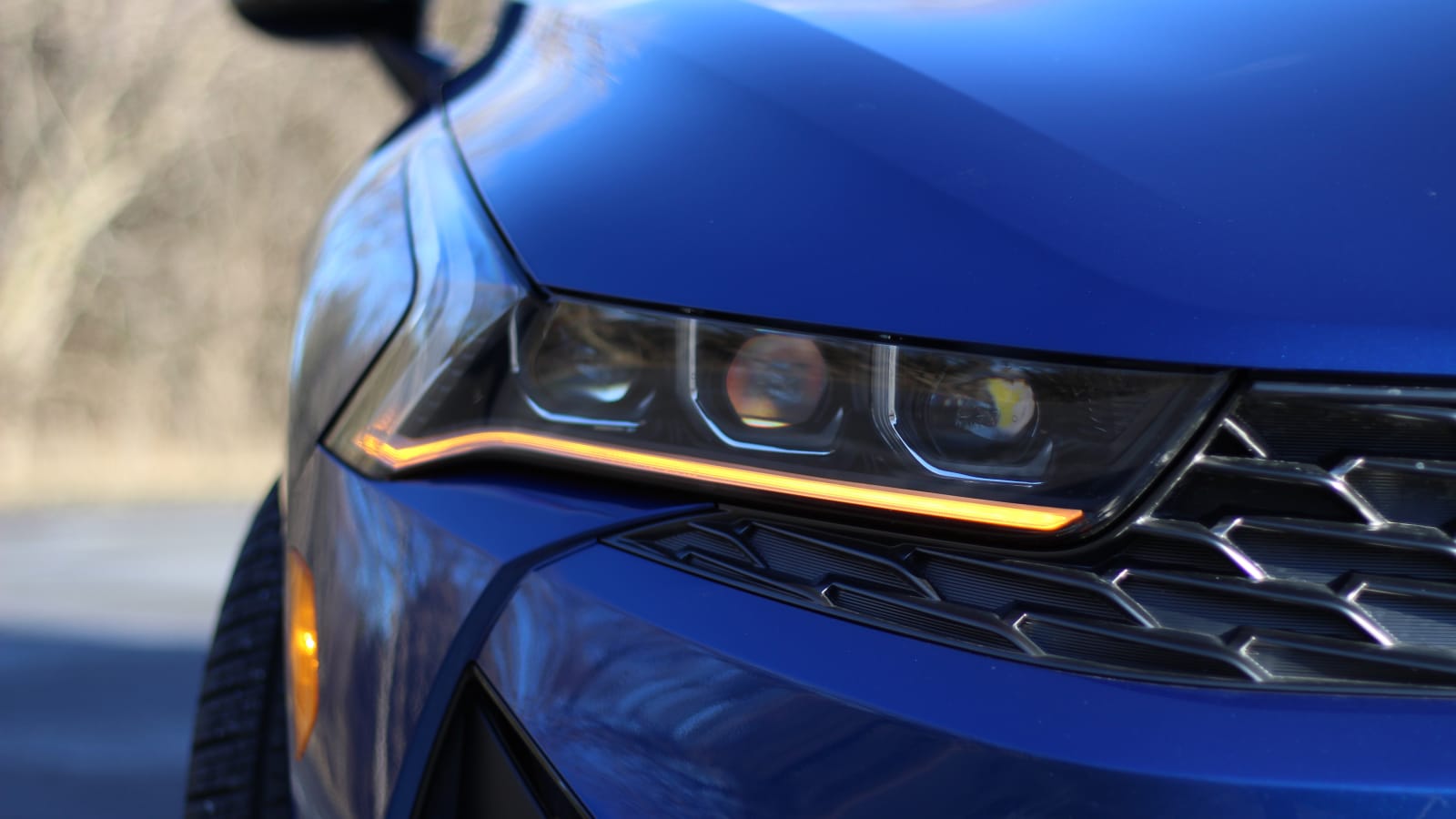 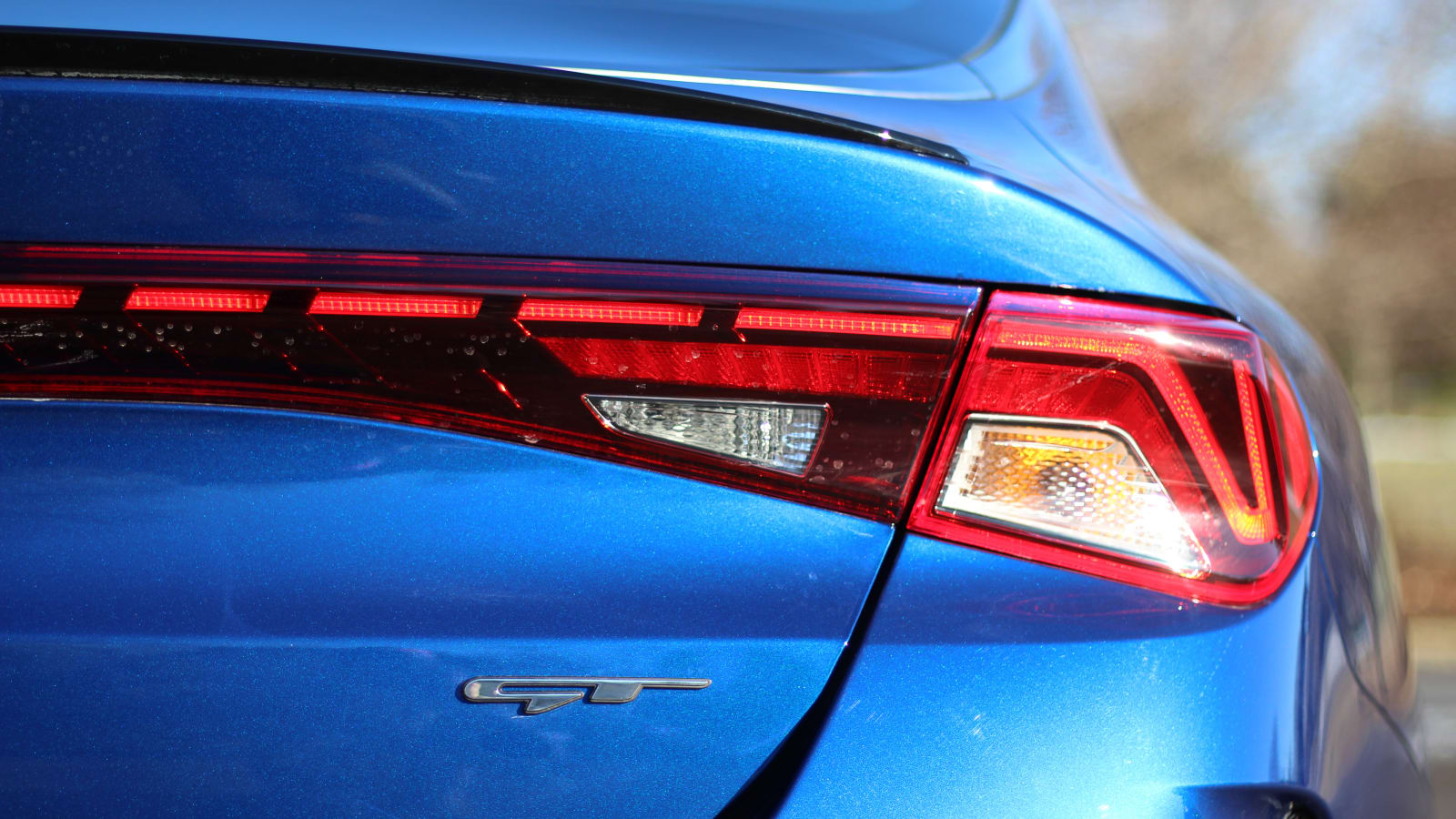 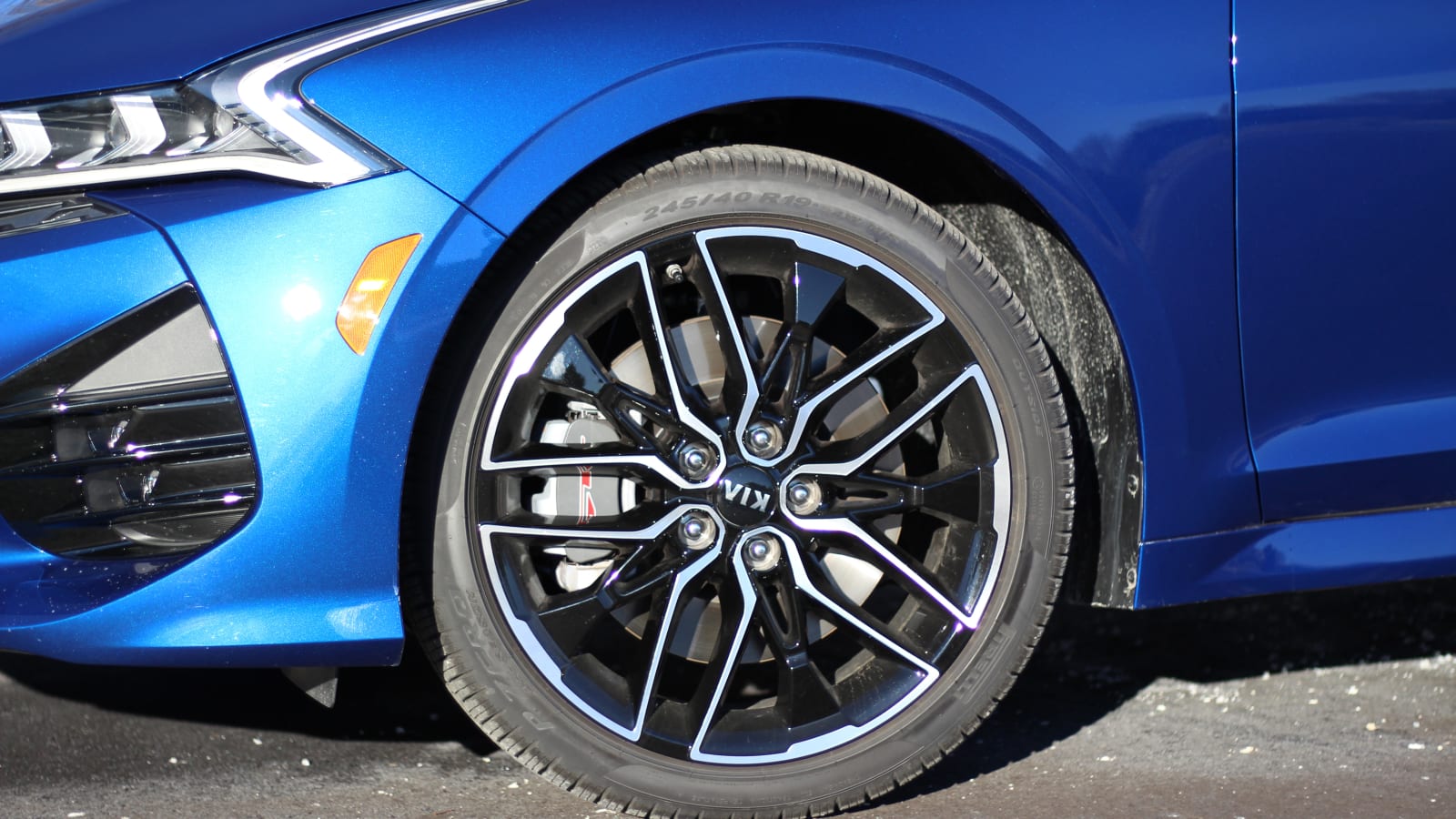 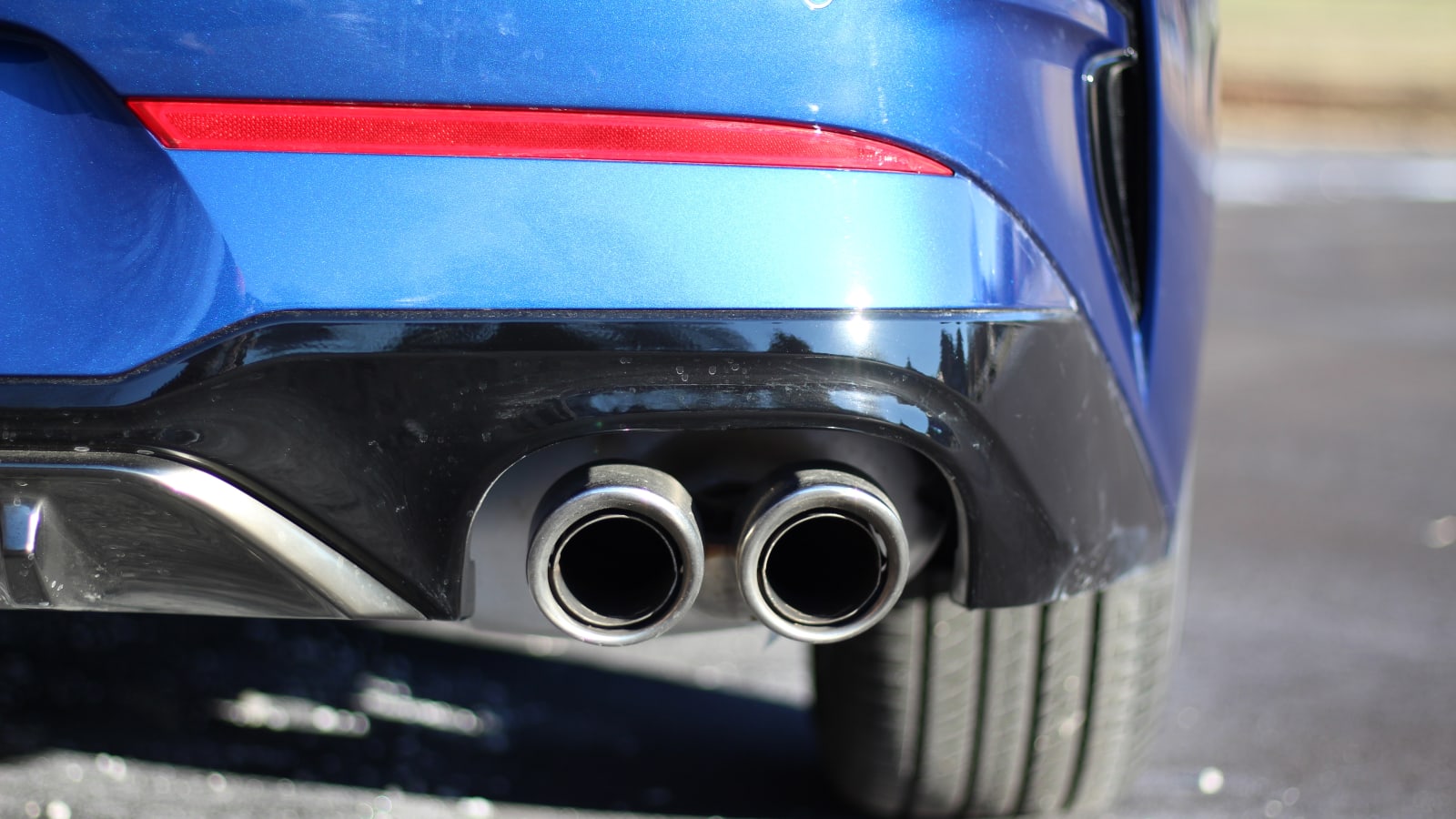 On the positive side, the power will let the car do a walking burnout all the way through first gear and keep the tires spinning after grabbing second. The steering wheel remains mostly straight provided you’re going straight. On the other hand, getting on the throttle with any sort of steering lock dialed in while traction control is off will bring about the scourge of torque steer. In a Scat Pack, overpowering the driven wheels mid-corner brings skids and smiles. Here, it takes you for an understeer ride that you never wanted. The cure is to be careful with the sensitive throttle, and only begin to unleash the torque once you’re past the apex and unwinding the wheel. Driving like a ham-fisted buffoon as you can do in cars like the Hyundai Veloster N or Honda Civic Type R will not bring about good results — those FWD cars will magically yank you through corners with little-to-no steering disturbances.

Unlike some other turbocharged options in this class of sedans (Honda Accord 2.0T, Mazda6 Turbo), this one is more than just an engine. The suspension is worked over, too, and it’s a great deal sportier than the standard K5. Kia didn’t go as far as adding expensive adaptive dampers, but the standard state of tune is much stiffer, and stiffer bushings are also used. It’s perfectly dialed in to make carving up a twisty road far more enjoyable, but doesn’t go so far as to make normal driving unpleasant. It recalls the well-damped and sophisticated ride quality found in a European sports sedan. There’s a firmness and solidity to the ride, but it never punishes.

The steering ratio is quicker than a standard K5 and the brakes are bigger, with 1.6-inch larger rotors in front and back, plus GT-specific calipers. A wider 19-inch wheel-and-tire package — 245-section-width Pirelli P Zero high-performance all-season rubber all around — comes standard on the GT. It’s one hell of a package for the price of entry: $31,585.

All of the above means the K5 can now meet the Accord and Mazda6 on a level playing field for best-handling sedan in this segment. Both the Honda and Mazda are splendid-handling cars to begin with, whereas the standard K5 falls flat. A comparison test is in order to sort out which is the best, but it’s safe to say that Kia has lifted itself right to the top of the enthusiast food chain with the GT. Still, its power is what unquestionably sets it apart from the rest. 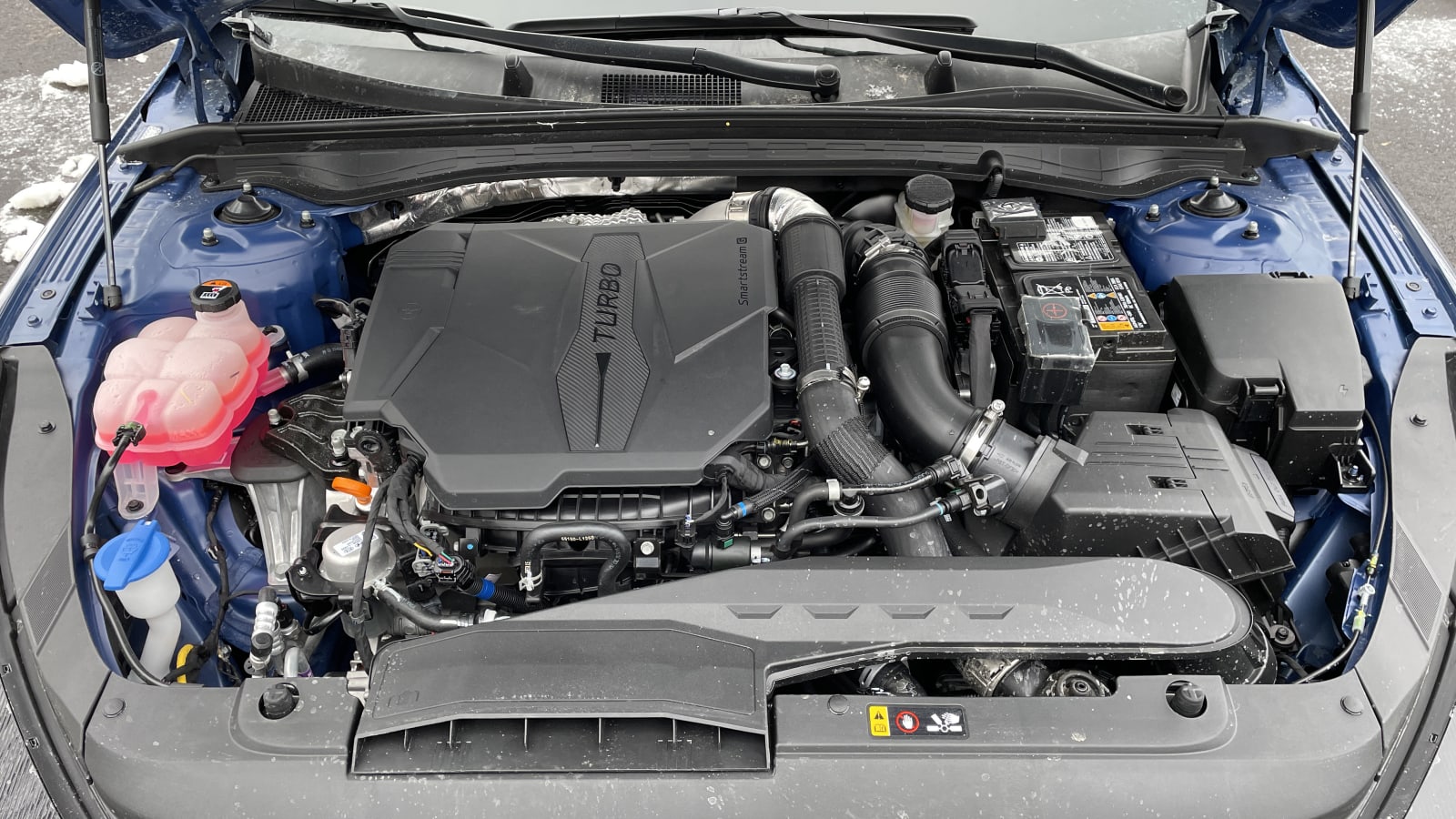 Kia claims 311 pound-feet of torque, and you feel every last pound of it with your foot flat. It’s a stronger shove in the back than any of the turbocharged competition, and it’s also the only one with a proper launch-control system that deftly controls wheel slip to get you up to speed efficiently. Power doesn’t seem to let up when you reach highway speeds either, as it accelerates strongly for far longer than you might expect. It even sounds halfway decent with a deep and low exhaust note — Kia lets you choose between four different levels of enhanced exhaust noise being pumped into the cabin. It definitely gets cartoonish at the highest level, but both of the two midlevel exhaust modes strike a nice balance. If you hate the idea of fake exhaust noise, Kia will also let you turn it completely off.

The dual-clutch transmission is another shining star. Shifts are rapid with each paddle pull, making the car a legitimate hoot to shift yourself. It’s still not to the performance level of dual-clutch units in pricier sporting cars, but it’s way more fun to paddle away in this than any of the classic torque converter-style transmissions available in its family sedan competitors (or, gulp, their CVTs). As expected, it’s also rather smart in Sport mode when left on its own, holding gears as it should in corners and promptly downshifting under braking.

Kia made the GT most recognizable from the rear where it gains a quad-tip exhaust exit. There’s no fakery going on here. It also gains a subtle “GT” badge in back and a black-painted spoiler. A new grille painted in “Hyper Silver” headlines the front, but it’s tougher to tell the difference between a GT and a GT Line here. The distinctive orange running lights stick around, and it also gets the already-mentioned GT-exclusive 19-inch wheels.

Inside, Kia adds a GT-specific sport steering wheel with decent-sized paddle shifters. It also gets special GT-embossed leatherette seats with bolsters just high enough to keep you from sliding out in corners without gauging your leg with each entry. Unfortunately, black is the only interior color available in the GT. It does come with red contrast stitching, but the GT Line’s all-red interior needs to be available as an option for the fully caffeinated K5 GT.

There’s just one option box to check, the GT1 Package at a hefty $4,000, but we highly recommend springing for it. It includes a host of awesome features: LED headlights, a 10-way power driver seat, heated and ventilated front seats, a heated steering wheel, a leather-wrapped shifter, larger 10.25-inch infotainment screen, a 12-speaker Bose audio system and every driver-assistance feature in Kia’s arsenal. The Highway Driving Assist included in this package is one of the best lane-centering systems on the market, and makes highway journeys remarkably easy. At $35,585 with this package, the K5 GT is an astonishing bargain.

It’s more of a performance car than anything else in the non-luxury midsize sedan world. There’s no exact equivalent, but if Honda made an Accord Si, this would be a reasonable result. The toughest competition is coming from within the Hyundai family with the Sonata N Line. That car is essentially the Hyundai version of this, with all the vital mechanicals remaining the same. Kia’s sedan looks better with its Stinger-like disposition, but Hyundai’s sedan is a bit classier, and you can get the tech-y digital instrument cluster that Kia doesn’t offer. 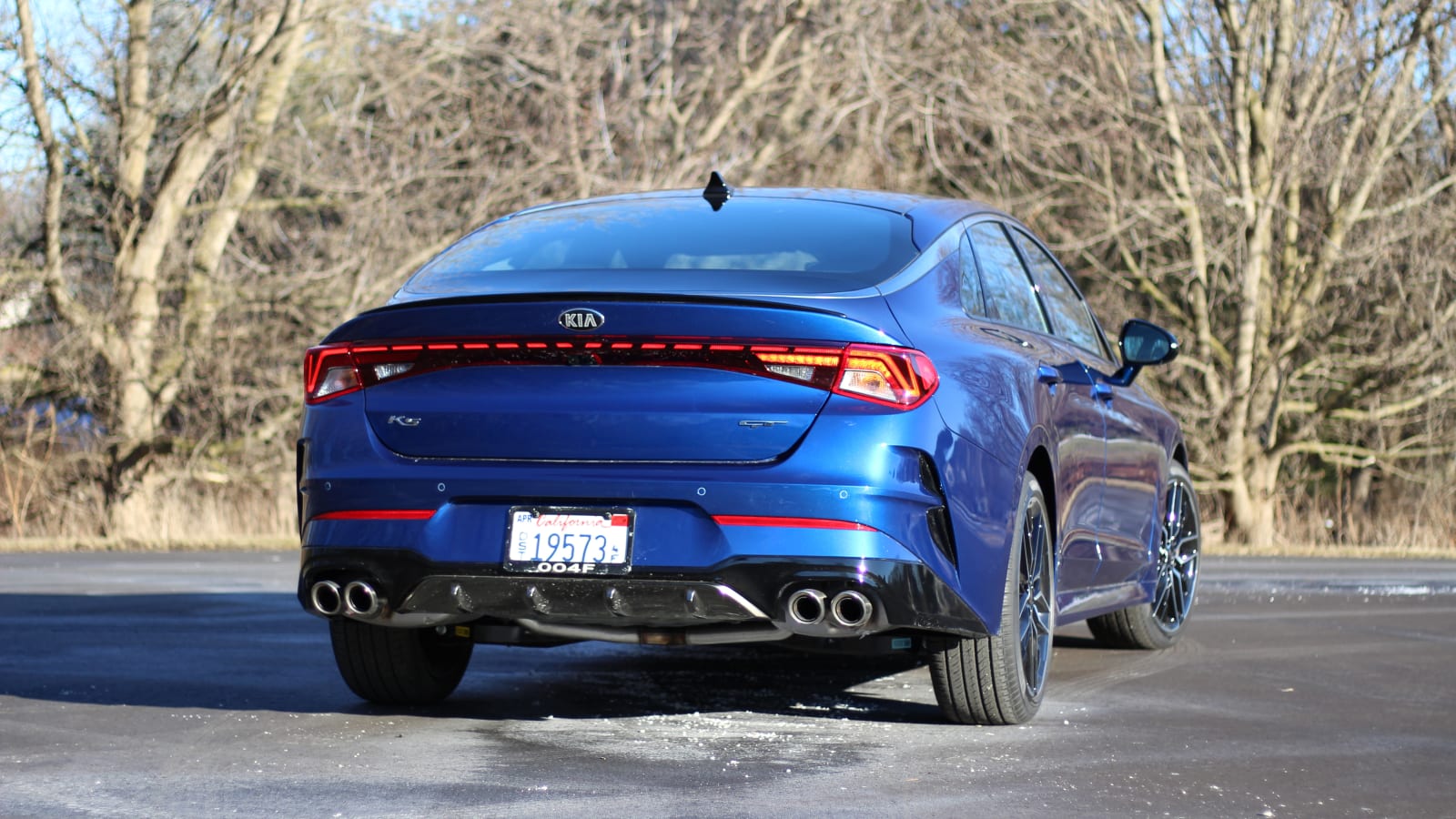 There’s also the BMW comparison that Kia has brought upon itself. Fully loaded, a K5 GT is $6,660 less than a base 330i. You’ll need to take the BMW up much higher to get all the tech gizmos that the K5 GT comes with. None of that changes the drive layout conundrum, though. A 3 Series is rear-drive or all-wheel-drive, whereas the K5 GT is front-wheel-drive, and it doesn’t hide that fact. The remedy here would be an all-wheel-drive K5 GT — Kia already offers AWD in the standard K5, but there’s no indication that the performance version will get it. As it stands, the K5 is indeed more fun to drive than a 330i, but BMW’s interior is far superior, and it’s a more fundamentally sound sports sedan.

What’s most important is that despite the K5 GT not being a perfect car, it puts a big smile on our faces. Kia knows what it’s done; one of the quick-toggle drive modes you can choose is literally just a traction-control-off Sport mode, because it knows how fun laying some fat strips of rubber is in this car. It’s not about setting Nürburgring lap times. The same ethos that gave us the riotous Charger Scat Pack is on display here, and while the methods might be vastly different, the K5 GT is prodding the same whimsical section of our brains.