2021 Honda Accord Hybrid First Drive | Still at the mountaintop

We won’t bury the lede. The 2021 Honda Accord is still a stupendous sedan and arguably the best in its segment. The car was completely revamped for 2018, and none of its competition have overtaken it since. Some among us will contend that the Mazda6 is top dog for pure driving enjoyment, but the Accord stands tall alongside the Mazda and is only getting better as this latest generation is treated to its mid-cycle update.

That said, there is one specific change that does have us bummed, and that’s the loss of the manual transmission. With a take rate of just 2%, Honda decided it wasn’t worth the trouble anymore. Guess you’ll just have to buy a Civic Type R.

In typical Honda fashion, changes are subtle enough that you may not notice them without a deeper look. The biggest appearance switch-up is a larger and restyled grille. It looks grander than before, even if you’d be hard pressed to tell the 2020 apart from the 2021 at first glance. Honda also redesigned the LED headlights for better illumination (likely the result of IIHS testing). Lastly, designers reduced the size of the fog light openings and added new wheel designs.

Tech enhancements are more abundant, and they’re nice enough that you may want to spend the extra dollars on a 2021 over a potentially discounted 2020. Even the base trim now gets Honda’s 8-inch touchscreen with Apple CarPlay and Android Auto. And if you snag an EX-L or Touring (or EX on Hybrid models), CarPlay and Android Auto are upgraded to wireless connectivity — a Honda first. It worked flawlessly for us, never crashing or failing to load. Even when running navigation and streaming music with our phone on the wireless charger, our phones never overheated, which is something we can’t say for BMWs. Honda also added two rear seat USB ports. 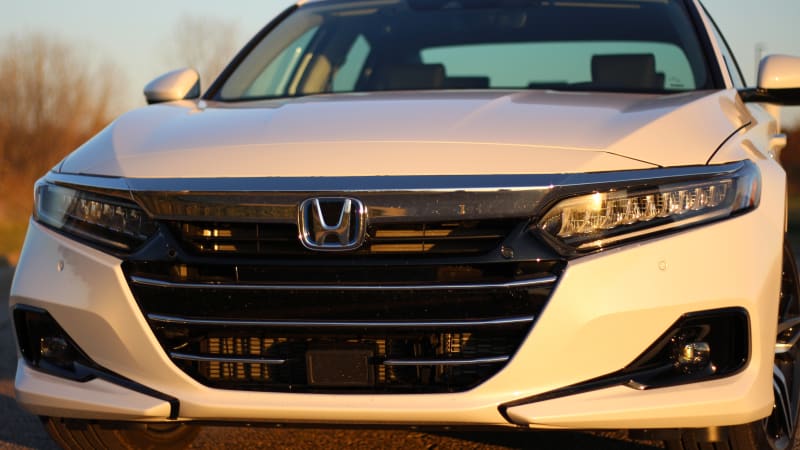 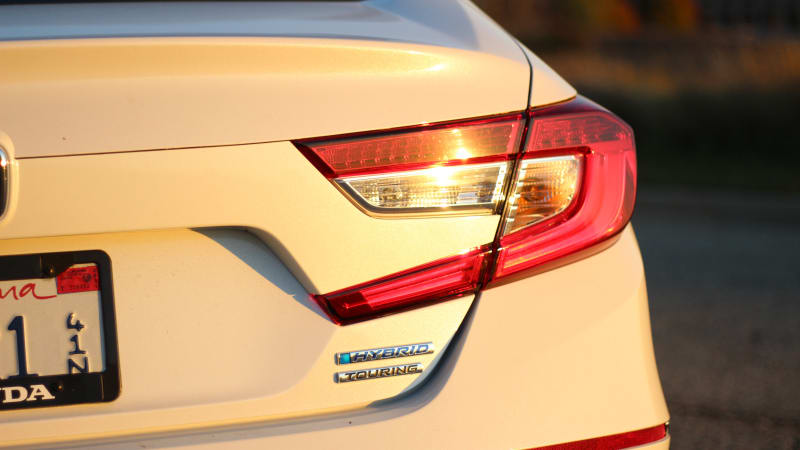 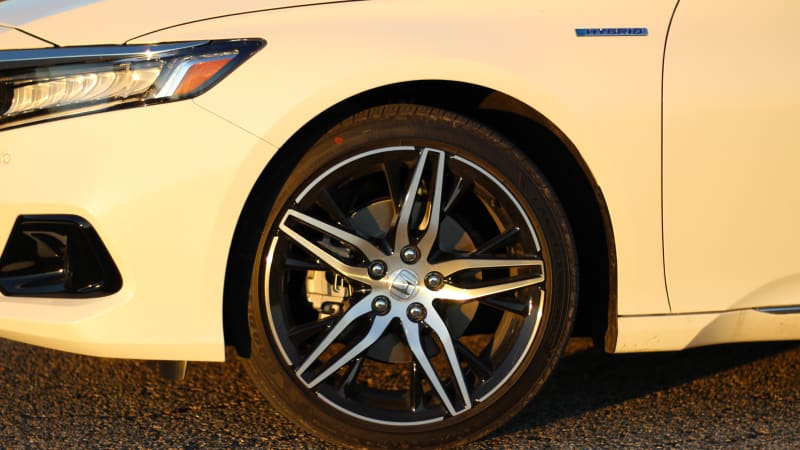 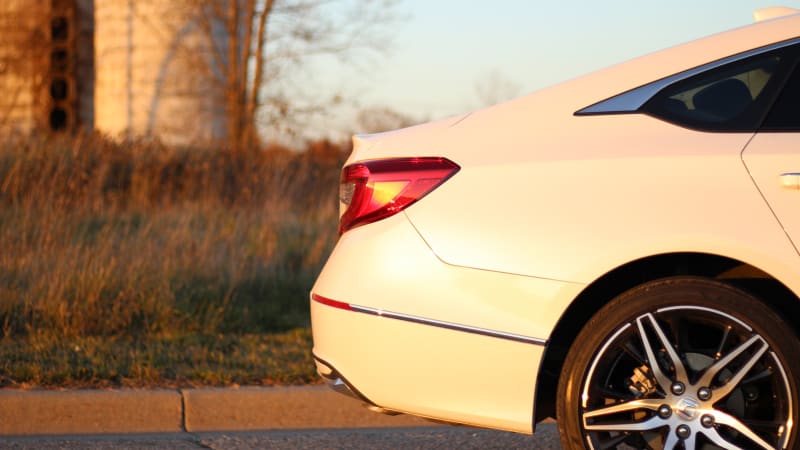 To fully understand that, we’ll give you a quick refresher on how the Accord Hybrid’s powertrain works, because it’s rather unusual in operation. In most circumstances, the electric motor solely powers the front wheels. Its battery pack is then replenished by regenerative braking and the naturally aspirated 2.0-liter four-cylinder engine acting as a generator. The benefit here is that you get supremely smooth acceleration with an unnoticeable switchover from electric to “gas” power. Plus, the Accord Hybrid is significantly quicker than all of its competitors. Only when you’re cruising at highway speeds does a clutch engage allowing the engine to directly drive the wheels. By contrast, a parallel hybrid, such as Toyota uses, employs an electronically controlled CVT to constantly meter out power to the wheels from the gas engine, the electric motor or both depending driving situations.

Due to the engine acting as a generator, the noises it makes don’t always align with what the human ear is accustomed to hearing as revs rise and fall. Honda thinks its 2021 updates make this process more normal even though the physical components are all carryover, and it fundamentally works the same as before.

As we drove through the steady misting from the northern edges of Tropical Storm Zeta in super tropical southeast Michigan, the disconnect between throttle position and engine revs was still abundantly noticeable. The complete lack of musicality from the engine itself, however, does a decent job of masking where exactly the revs are. It goes from a low buzz, to a medium buzz, and eventually with the throttle flattened, to a slightly higher and louder buzz. If you’re familiar with a CVT’s operation, this won’t seem unusual. Ultimately, the disconnect between sound and throttle position is less of an issue than Honda is making it. It’s a hybrid — a little weirdness is expected. 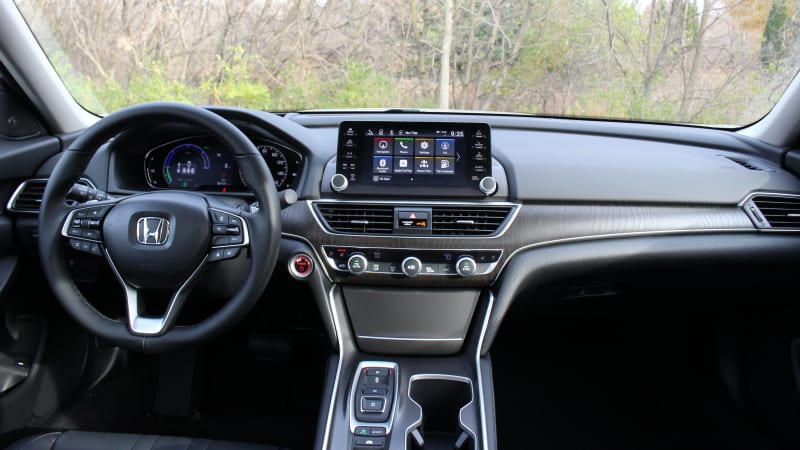 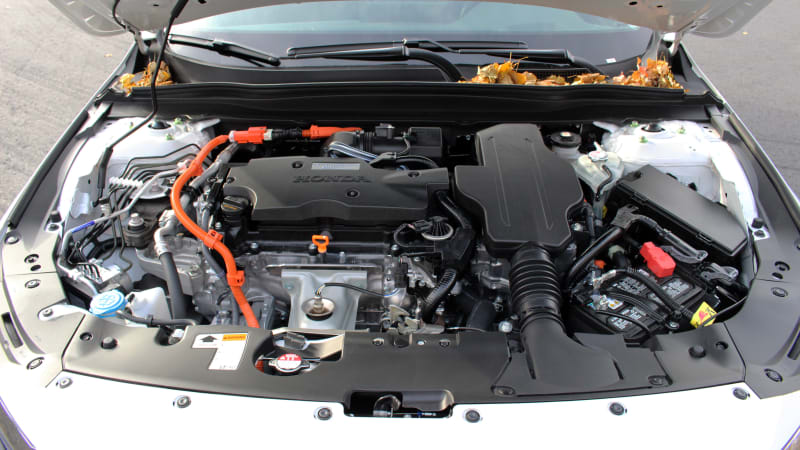 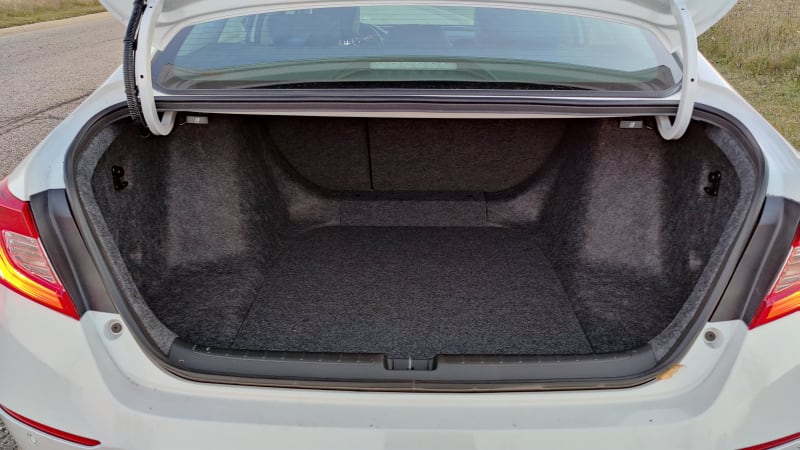 Honda claims a 0-to-60-mph time of about 6.5 seconds, which is outrageously quick for a large hybrid sedan that’s rated at 48 mpg combined or 43 mpg for the Hybrid Sport and Touring. It’s also a full second quicker than the significantly less efficient 1.5T. The electric motor gets the car off the line quickly, but throttle response at speed is disappointing. It’s a one potato, two potato, thr- count from when your foot goes down to when the Accord Hybrid begins its surge forward. Similar to a turbocharged engine building boost, the Accord scoots once it’s caught up to your foot. Response improves by a bit in Sport mode, but who wants to drive a fuel-efficient hybrid around in a mileage-sapping “Sport” mode all day?

The Accord Hybrid still encourages backroad shenanigans should you so desire. Our Touring trim tester had the adaptive dampers that can be firmed up by a tap of the Sport button. Just as we found in our last Accord Hybrid review, this one can tear up a twisty section of road and leave you grinning at the end. Its composure through back-to-back corners is laudable. We’ll credit some of this car’s excellent balance in these situations to its battery location below the back seat and therefore in between the axles. There’s a beautifully controlled lean when pushed, as the suspension has just enough forgiveness in it to sop up mid-corner bumps without upsetting the chassis. It’s just stiff enough to give the driver total confidence to keep pushing, and it’s frankly astonishing how well this big, front-drive sedan handles. We’re also grateful for the low seating position and skinny A-pillars, more icing on an already delicious cake.

The 2.0T is still the go-to for enthusiasts who want power, but Accord Hybrid owners are denied none of this car’s cornering chops. Plus, the attractive new 19-inch wheels don’t seem to hurt ride quality too terribly on rough pavement, even if a smaller size would be cushier.

All 2021 Accords gain some new and/or updated safety equipment. A Rear Seat Reminder is new and standard, while upper trims add rear automatic emergency braking. Honda also says it fine-tuned the adaptive cruise control and lane-keeping assist systems for better operation. Though better than the rather rudimentary systems in the Pilot and Passport siblings, both are still disappointing. Even on the closest setting it leaves far too large of a gap between cars, which encourages other highway users to constantly cut in front of you. The lane-centering system works well, but others such as Hyundai’s Highway Drive Assist and Nissan’s ProPilot Assist require even less driver input.

When you start to look at pricing and features, a new strategy from Honda comes into focus: Honda wants you to buy the Hybrid. In addition to being quicker and way more efficient than the 1.5-turbo, Honda is also giving trim-equivalent Accord Hybrids more feature content than their gas-only counterparts. Basically, Honda has cherry-picked a number of notable features from higher trim levels on the gas engine Accords to tack onto lower trim Hybrid models. It’s a better value, and that’s even before taking into account your potential fuel savings over time.

The way we see it, there are two excellent options — Hybrid and 2.0T — and one just OK option, the 1.5T. Enthusiasts desiring more power alongside the 10-speed automatic transmission and every possible luxury feature should go for the 2.0T. Everybody else will be better off with any Hybrid trim. The base Hybrid is $1,600 more than a base 1.5T, but you’ll likely recoup that money in gas savings in a few years and enjoy the better acceleration and fewer gas station stops while you’re at it.

Compared to other green competitors like the Sonata Hybrid or Camry Hybrid, the choice to go Accord is even more obvious with the 2021 updates. Efficiency is mighty close, but the Accord is significantly quicker and it handles more like a sport sedan. It’s the hybrid for both the green car traditionalist, and for a driving enthusiast wishing for an efficient daily driver.