It’s impossible to talk about the 2021 Ford Mustang Mach-E without first mentioning the elephant in the room, or rather, the horse in the grille. By naming its new electric crossover “Mustang,” Ford invited the scorn of car fans everywhere who equate that name and badge with 56.5 years of iconic V8-powered coupes. “That isn’t a Mustang!” Fair enough, but the name has nevertheless accomplished two things: it has attracted the attention of non-car fans everywhere in a way most new EVs haven’t, and it has ensured that Ford’s new electric crossover is far more interesting and just far better than some generic, Escape-looking electric vehicle would have been.

So think of it simply as Mach-E if you must, and then move on to appreciate the fact that Ford has created a well-executed electric car that’s enjoyable to drive, handsome to behold and functional on a daily basis. It has the interior design, quality and features to help justify its high-for-a-Ford price tag, but then it also grossly undercuts various luxury-branded EVs. We also appreciate its more conventional interior to Tesla’s and are more confident in its build quality, though its EV specs certainly fall short of the Model Y’s impressive capabilities. The important thing, though, is Ford has created something good enough and cool enough to give EV seekers a more affordable Tesla alternative that isn’t a cheaply finished subcompact hatchback.

The Mach-E is all-new for ’21, but not all versions will be available right at the beginning. Specifically, the Mach-E GT will be a late availability and we can’t rule out it being launched as a ’22.

There’s nothing remotely Mustangy about the interior apart from the horse on the wheel, which is just fine. Material quality is far better than expected, compared to either the regular Mustang or Ford’s recent disappointing efforts in the Escape and Explorer. Plastics are of a higher quality, and the dash and doors are mostly covered in a padded, leather-like surface that’s similar to what you’d find in a Lincoln. The ActiveX fake leather sure looks and feels like the real stuff, and the Premium steps things up further with a classy gray cloth trim across the dash.

Then there’s the design. Slapping a 15.5-inch vertically oriented touchscreen and a 10.2-inch letterbox widescreen instrument panel into a retro cabin would’ve looked ridiculous, like putting an Apple Watch on Big Ben. Instead, it’s clean and modern, but with just enough traditional controls and useful center console storage.

That jumbo touchscreen is also one of the best examples of this growing trend. Rather than stuff as much as possible on the screen, it makes good use of the extra real estate by making buttons and displays bigger and more easily read at a quick glance. Having a separate instrument cluster is also appreciated, which is absolutely a reference to Tesla. We go into the Mach-E’s infotainment system more thoroughly in this Driveway Test Review.

How big is the Mustang Mach-E?

The Mach-E’s dimensions are unusual. It’s longer than compact crossovers like Ford’s Escape, but not quite as long as midsize models like the Edge. It is considerably shorter in height than both and its wheelbase is longer – both contribute to its sleek proportions that are not only different than crossovers with internal combustion engines, but various EV crossovers, including the Tesla Model Y and upcoming Volkswagen ID.4 and Nissan Ariya.

So what does that mean inside? The back seat offers sufficient legroom for a 6-footer to sit behind himself and for an infant car seat to fit in the middle with the front seat fully rearward. There’s also more than enough headroom. However, the seat itself is a bit low and awfully flat, and the seat back doesn’t recline. The front seats aren’t that comfortable, either, come to the think of it, but that’s more to do with their shape than space.

With its aggressively raked roofline, it shouldn’t be surprising that the Mach-E isn’t the most utilitarian crossover. It basically just has a really big trunk with a hatchback lid. The space is deep and wide, and there’s a handy folding cargo cover. In the end, we managed to stuff six pieces of luggage into a space officially listed as 29.7 cubic-feet. 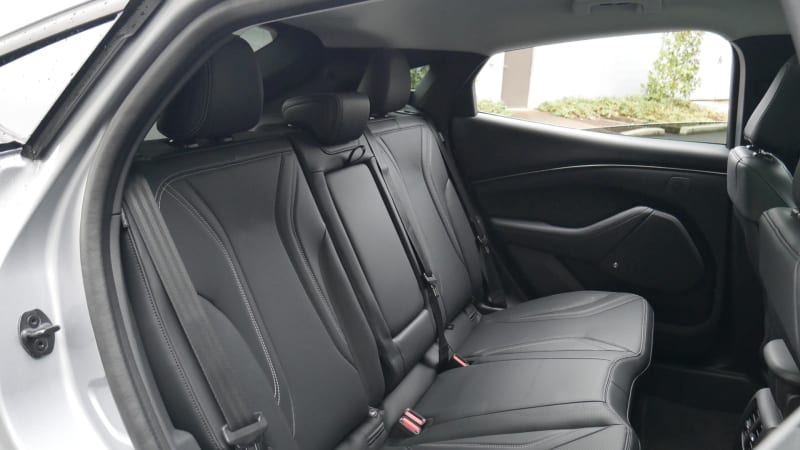 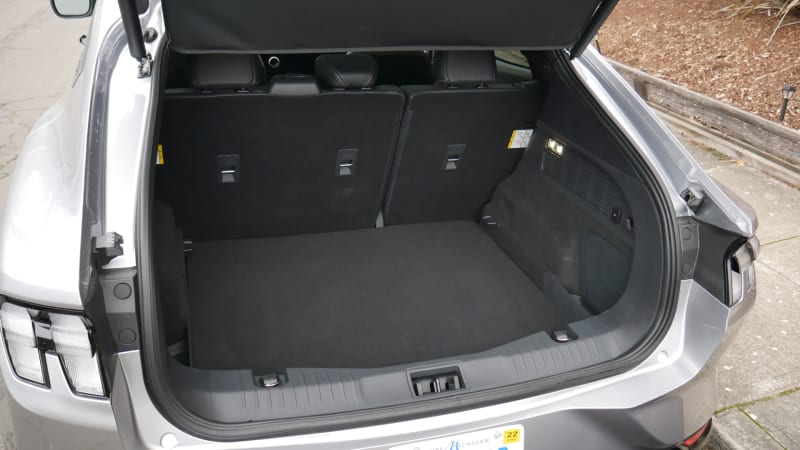 With battery packs and drivetrains, the Mustang Mach-E’s performance hierarchy is frankly a bit confusing, but we’ll do our best to break it all down.

The “Standard Range” Mach-E battery pack has a useable capacity of 68 kWh. Many EV makers list total capacity even though the vehicle doesn’t have full access to it. Either way, it results in an apples-to-oranges spec comparison at times.

With the standard 68-kWh pack, the Mach-E produces 266 horsepower regardless of drivetrain. With rear-wheel drive, it produces 317 pound-feet of torque, goes from zero to 60 mph in 5.8 seconds and has an EPA-estimated range of 230 miles. With optional all-wheel drive (a second motor is added to the front axle), torque is greatly upped to 428 lb-ft, the 0-60 time falls to 5.2 seconds and range falls to 211 miles.

As for charging, Ford will offer two sets of 240-volt chargers with the Mustang Mach-E. The permanent home charger can add 32 miles per hour of charging, while the portable version can add 22 miles for each charging hour. The Mach-E has DC fast charging compatibility, and provided that the charger is rated at 150 kW, it can go from a 10% charge to 80% in 38 minutes, with the first 47 miles being added in 10 minutes. Last and least, there’s also a 120-volt mobile charger that gets you 3 miles of charge per hour.

We have yet to drive all those variants of the Mach-E, but can at least say that the Premium AWD with the Extended Range battery impressed. It has tightly controlled body motions and a firm, yet well-damped suspension that also manages to gobble up nasty pavement without harshness. Despite its crossover body and significant curb weight of around 4,800 pounds, the Mach-E feels smaller and lower than the typical sporting crossover. The curvaceous hood rises at the corners, evoking any number of sporting cars and making it easy to place in corners. The steering is precise and weighted comparably to a Mustang’s, but response and feel do not equate. It feels more artificial and distant. If there’s a dynamic area the Mustang Mach-E could be better aligned with Mustang O.G., it’s this.

As in many other electric cars, but not all, the Mach-E offers drivers the choice of one-pedal driving. Easily accessed with a press of a button in a touchscreen menu, it is one of the most aggressive regenerative braking applications out there. It’s also one of the best. Not only will the Mach-E come to a stop simply by easing off the throttle, it utilizes the Auto Hold function to stay stopped until you toe the throttle again. You quickly start to time the just-right moment for lifting off and by how much, which is curiously satisfying. The same thing happens when hustling along a mountain road – perfectly timing the throttle lift-off point adds a surprising amount of driver involvement.

As for the powertrain, we’ve only experienced the most powerful version currently available (the Premium AWD 88-kWh) and it feels every bit as quick as its 4.8-second 0-60-mph estimate. All that instantaneous torque embeds your body firmly into the soft front seats as it gets the Mach-E up to speed with ease, but it doesn’t have that take-your-breath away violence of high-end Teslas or the Polestar 2. And as those speeds rise, it runs out of steam in a way indicative of a car whose horsepower number is so much smaller than its torque figure. None of that should be taken to mean that the Mach-E is slow. It’s not, all versions are bound to impress, whether you’re coming from a sporty car or SUV, or from another EV. It’s just that there’s definitely room in the hierarchy for the spicier GT versions.

What more can I read about the Mustang Mach-E?

Our review of the current top trim level, the Premium AWD with the 88 kWh Extended Range battery. 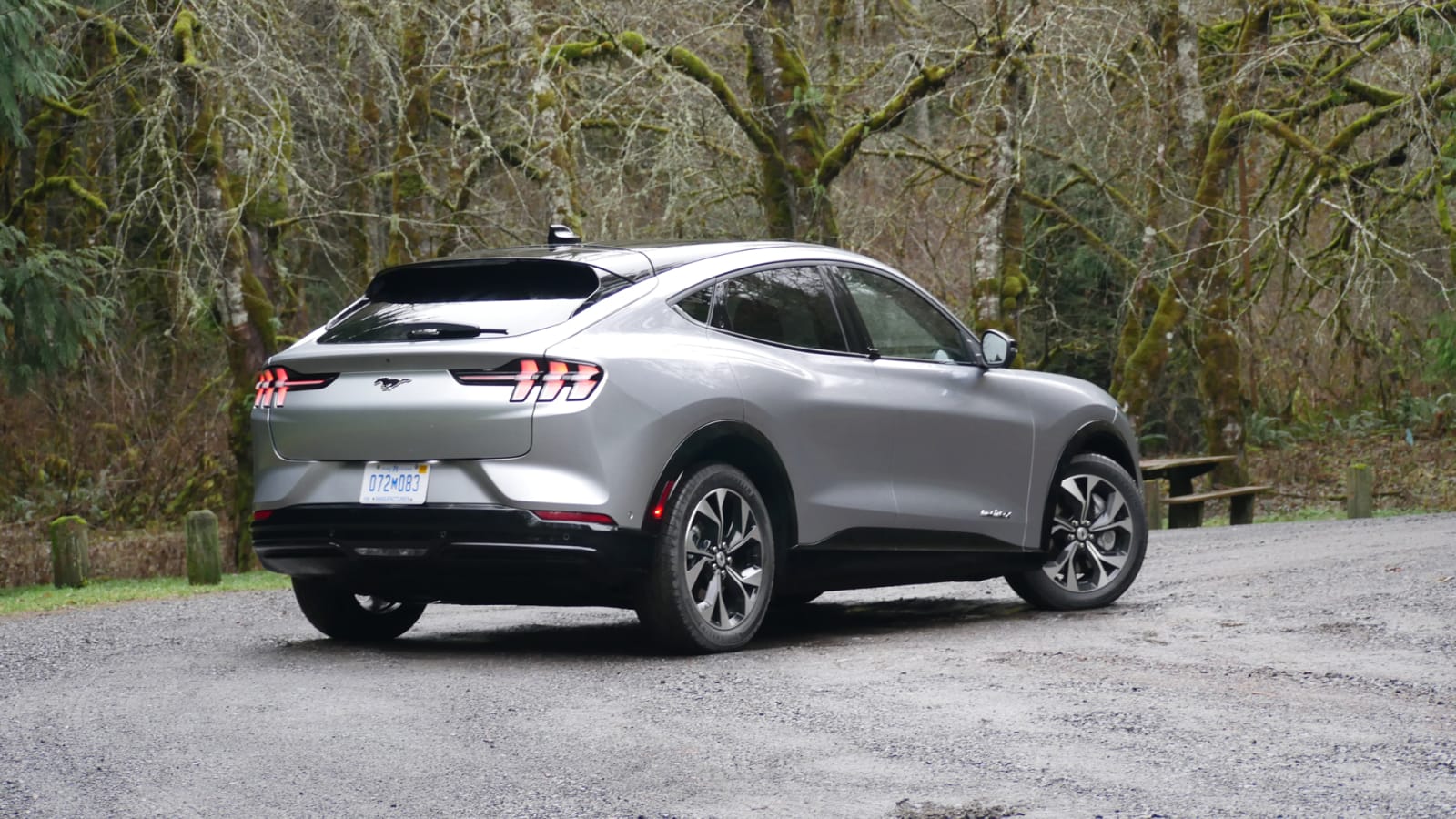 Our first official test of the Mach-E, including comparisons with the Tesla Model Y. 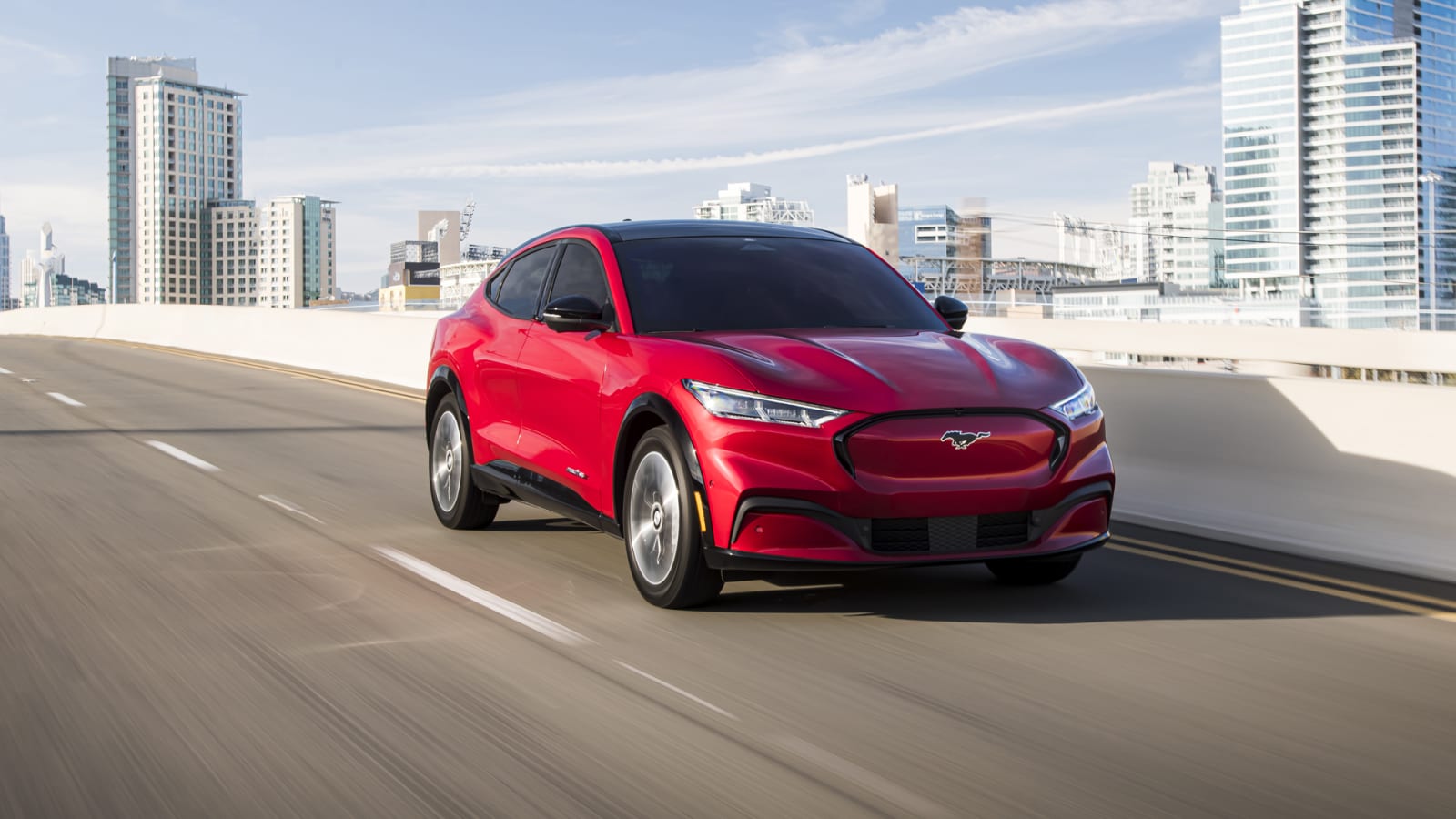 The 15.5-inch touchscreen may wow with its size, but it’s the added functionality that really matters. 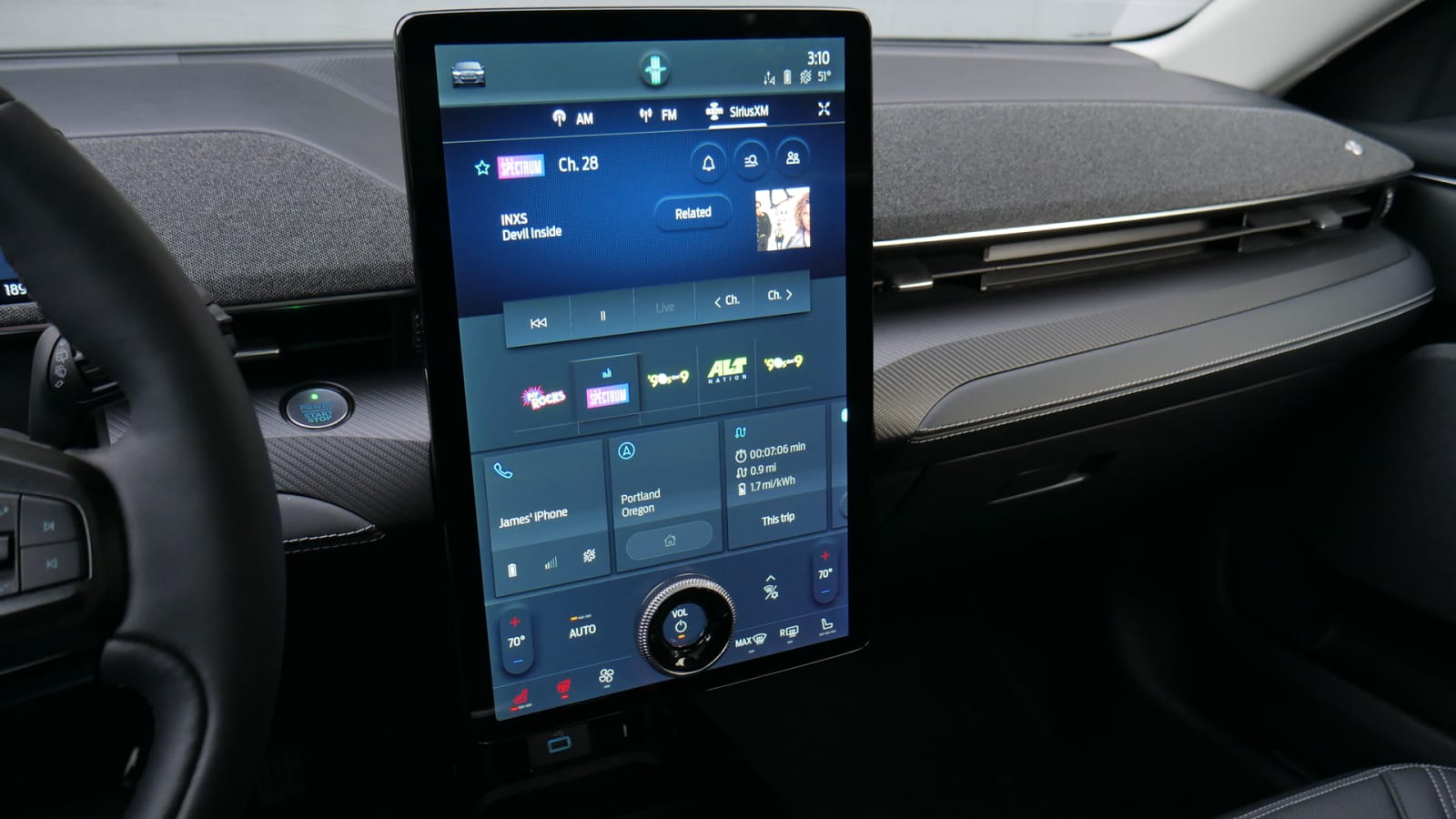 See how much you can fit in the cargo area, including when compared to other coupe-like crossovers. 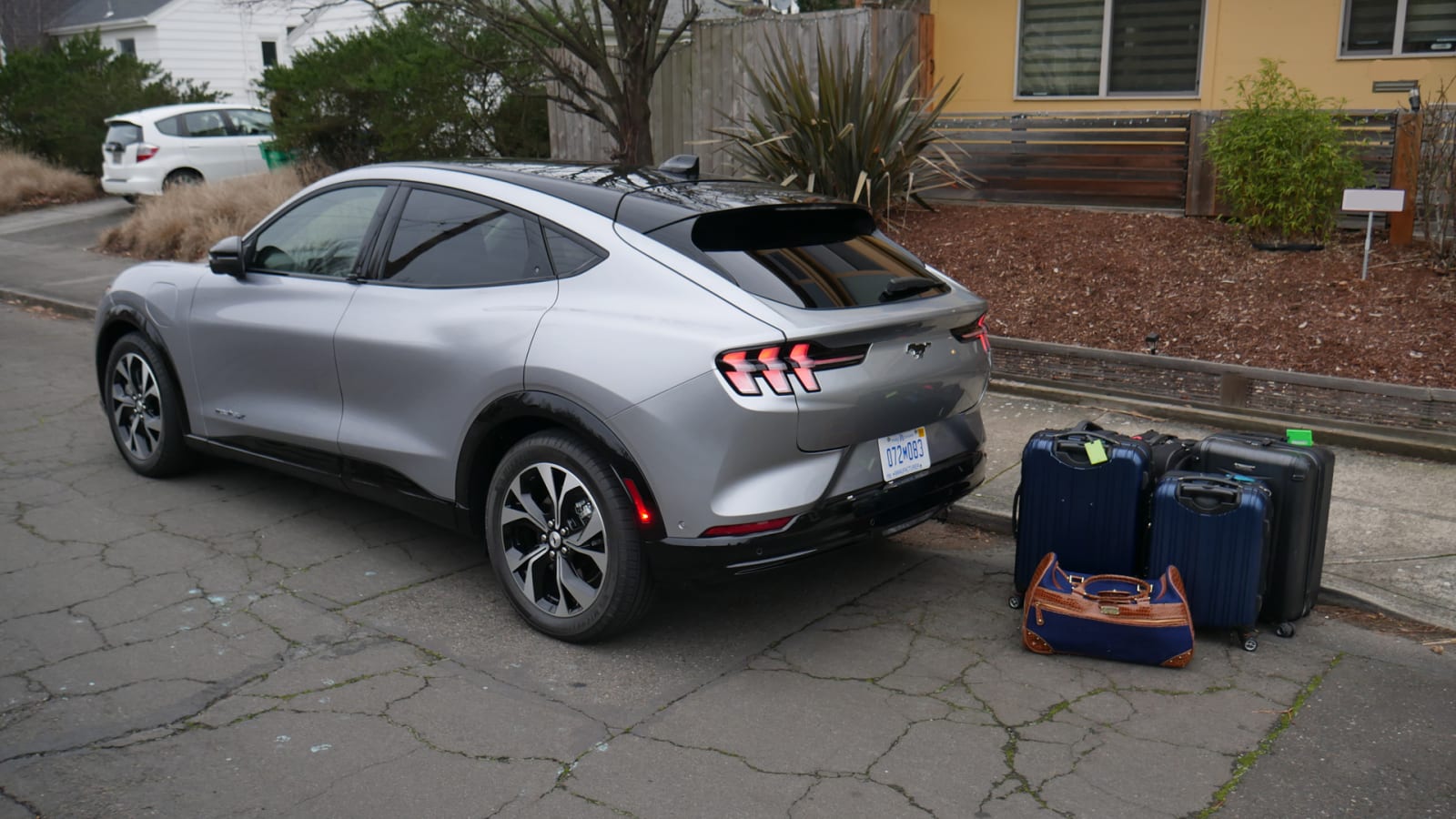 What can I watch about the Mach-E?

Pricing starts at $43,995 for the base Mach-E Select with rear-wheel drive and the standard battery. That includes the $1,100 destination charge, but not the $7,500 federal tax credit and any potential state EV credits. The visual differences between all the trim levels can be seen in the gallery above.

The California Route 1 trim comes standard with the more powerful battery, a panoramic fixed glass roof, unique exterior trim, a 360-degree parking camera and the “Active Drive Assist Prep Kit” that outfits the car with the hardware that will be needed once the software for a more comprehensive driver assistance suite is ready.

Besides its performance upgrade and standard all-wheel drive, the GT gets 20-inch wheels, unique exterior flourishes and ActiveX upholstery, a 10-speaker B&O sound system, and all the Premium’s upgrades.

Besides performance/battery upgrades, only the Select is eligible for traditional options that are restricted to Comfort/Appearance and Comfort/Technology packages.

What are Mach-E’s safety equipment and crash ratings?

The Mach-E has not yet been crash tested by a third party.