Yep, the F-150 Raptor is back, though you’d be forgiven for not noticing that it ever left. Ford’s off-road model is taking a few months off to accommodate the broader 2021 F-150 redesign from which it benefits. And the fine folks over at Ram took full advantage of that lull to launch the new 702-horsepower TRX, which in one big way (hint: it’s the engine) stands at the top of the performance pickup heap.

Ford says that’s all going to change in 2022, but for now, the Raptor returns with a familiar 3.5-liter EcoBoost V6 (albeit with an unspecified power figure) along with several other revisions to Ford’s tried-and-true formula. The 2020 Raptor was already a worthy adversary to the beefy Ram despite the latter’s definitive power advantage, so how has that picture evolved for 2021? Let’s take a look. 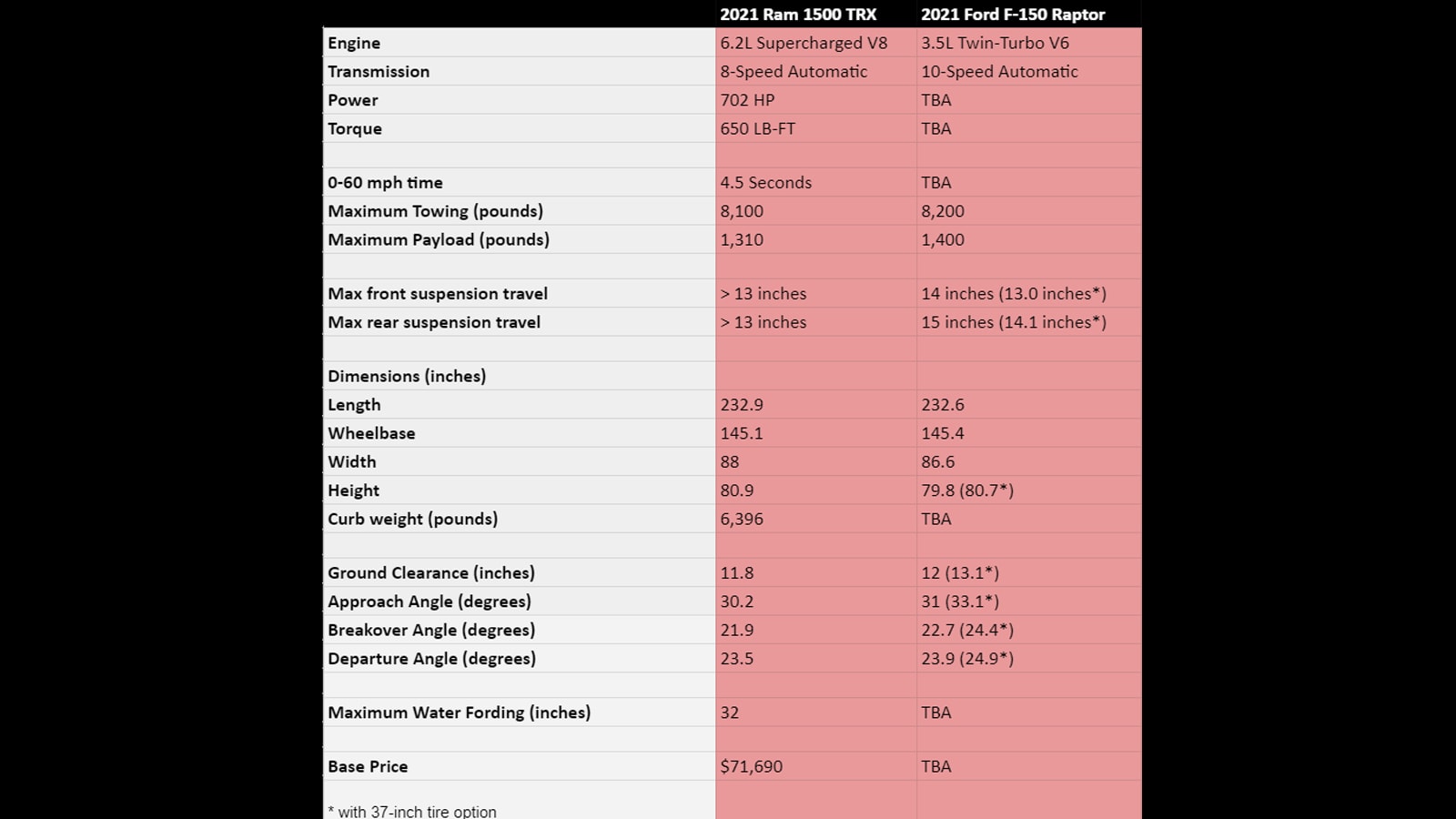 This is a big question mark for the Ford right now, but it seems reasonable to expect a bit more than the outgoing model’s 450 horsepower and 510 pound-feet of torque. The TRX’s Hellcat-sourced powerplant needs no introduction. Its 702 horsepower will easily eclipse whatever Ford has planned for its 3.5-liter twin-turbo V6, even if the V6 has more grunt than it did before, but that’s OK. It’s not the base-model Raptor’s job to dethrone the TRX in straight-line speed; that honor will go to the 2022 Raptor R. We also don’t know what the Raptor’s fuel economy will be like, but we suspect it will be better than the TRX’s, if only slightly.

Both these trucks come with four-wheel-drive standard, and they both have a number of drive modes that alter the powertrain’s characteristics depending on the terrain. Baja mode transforms the trucks into the desert runners that they both are at heart, but they’re plenty capable of crawling around rocks, too. We won’t know for certain which is best at specific tasks until we can get them both on (or off) equal ground. 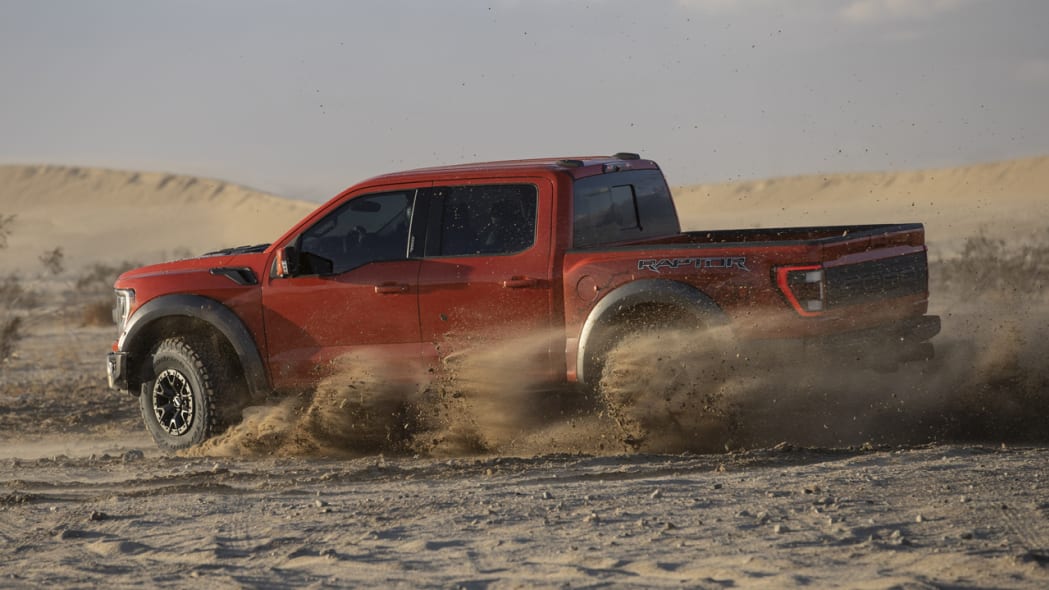 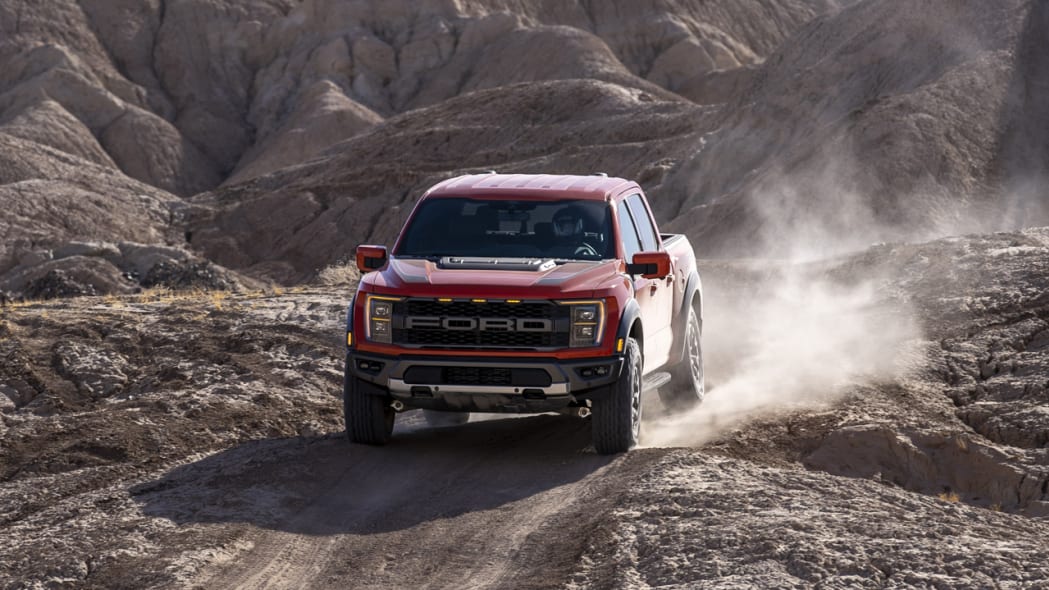 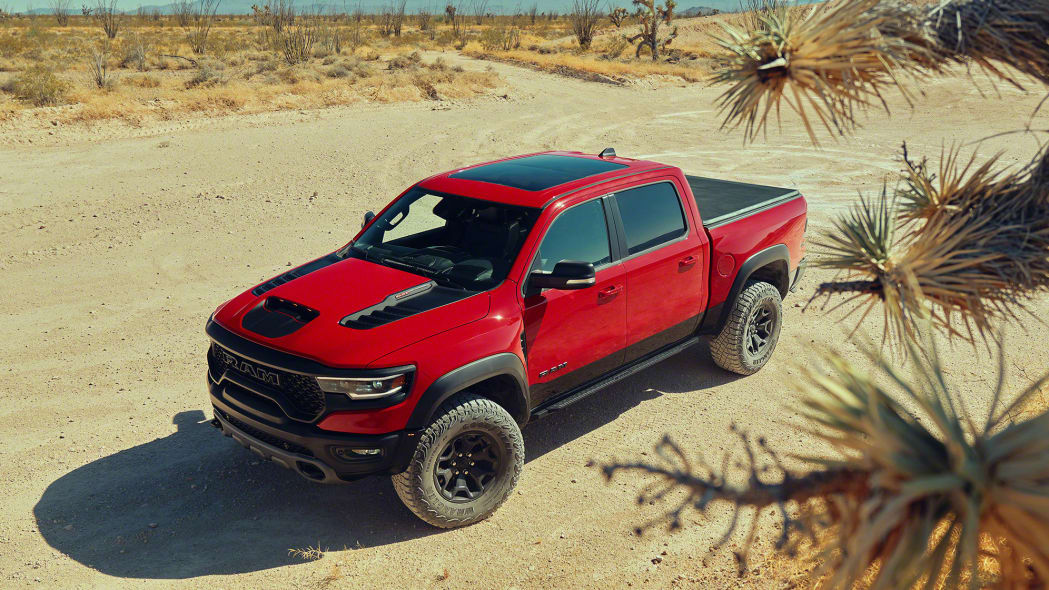 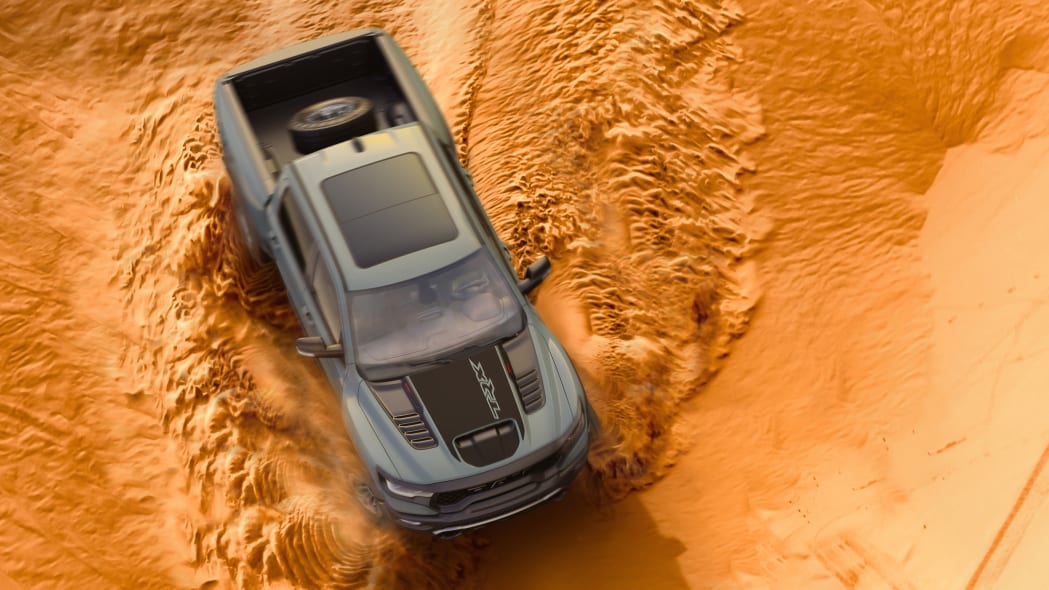 And the ground is where things narrow significantly, both on- and off-paper. The specs are freakishly similar when we compare ground clearance, approach/departure angles and water fording, but the Raptor’s leapfrog here is clearly evident. Both trucks utilize a coil-sprung rear suspension now, with Ford having abandoned the Raptor’s previous leaf-spring setup with the redesign.

The two use different shocks to handle 100-mph-plus desert running. Ram has bought into Bilstein Black Hawk e2 adaptive shocks, whereas the Raptor uses FOX Internal Bypass shocks with Live Valve technology. Both continuously adapt their damping characteristics with the terrain. They both use electronically-controlled valves to do this, taking a number of factors into account. Bilstein and Fox are two companies we trust to put together a lovely product for this application, but it’ll take time behind the wheel to ascertain which offers better real-world performance.

Ram also went a similar route as the Raptor with its modified control arms and general chassis improvements. Both have beefed-up frames to handle jumping, but of course, Ram is claiming that their frame is stronger.

The F-150’s optional limited-slip differential up front looks like it has an advantage over the TRX’s open front differential. Neither prioritize low-speed crawling with locking differentials in front, but both have electronically-locking rear differentials. The 35-inch tires on both trucks should work wonders for both high-speed and low-speed maneuvers, and the optional 37s on the Raptor will be a nice show-off piece for the Ford faithful; they buy a little extra ride height and clearance room to boot. Skid plates are everywhere on these trucks, so unless you do something especially sketchy, you’re likely to make it home in one piece.

As for weight, we should note that while Ford did not provide curb weight figures for the 2021 Raptor, we suspect it will undercut the TRX in this department thanks to the F-150’s extensive use of aluminum body panels and likely aluminum-block engine (all SRT engines are iron-block). The outgoing Raptor weighed a comparatively svelte 5,525 pounds; the 2021 figure remains to be seen.

We know that the TRX isn’t cheap, but we’re not sure how bad it might look compared with the Ford, since its price is a mystery. We expect it’ll start around the same $60k-ish mark as the previous truck, with the R likely rivaling the Ram TRX’s $72,000-ish base price. The Raptor is slated to go on sale some time this summer, so we shouldn’t have to wait terribly long to get the full story. Raptor R? Well, we’re another year out from that, most likely. We’ll just have to see how that develops.