After being thoroughly impressed with seeing and driving the 2021 Ford Bronco Sport, we decided to sit down (virtually) and have a chat with some of the key folks who designed it. The little crossover’s design contributes heavily to how it feels behind the wheel, which in a nutshell, is very truck-like.

Paul Wraith, chief designer of both Bronco and Bronco Sport, and Brian Paik, Ford senior exterior designer, explained how Ford went about making an Escape-based crossover turn into the plucky off-road monster that it is.

“This vehicle shares a lot of its underbody with the Escape, but side-by-side they are miles apart,” Wraith tells us. “The front end overhang is really aggressive, and it’s short, that upright rear end, so many unconventional things that we’ve done on this vehicle.”

The team moved the A-pillars way back and adjusted their angle to make them upright, similar to the big Bronco. Its hood is so high and horizontal so you can see the corners of it from the driver’s seat.

“How many contemporary cars when you look forward, the most forward thing you can see is the windshield wipers. That’s no good,” Wraith says.

The edges of the hood are raised so you can see exactly how wide it is on a tight trail. Wraith says they intentionally kept the windshield itself lower than normal. This was done to keep you from being blinded by the sun or a bright sky in wide-open spaces where Ford expects folks to take the Bronco Sport. Wraith says the design team really challenged the platform to work for Bronco Sport. There’s no doubt that they’ve succeeded in making it a wholly different experience from the Escape.

The team deviated from Ford norms when it came to things like trim levels and badging. You won’t see the typical XL, XLT or Titanium plastic badges on the Bronco Sport. Nope, Ford designed totally new, texturized (and reflective) badges for the new trim levels: Base, Big Bend, Outer Banks and Badlands. Even the Ford badge has taken on a secondary role to “Bronco Sport” being spread across the rear liftgate. This unique design touch was made possible by Ford moving the license plate down into the rear bumper, a move you don’t typically see in the tiny crossover space.

“Every aspect of the vehicle deserved secondary and tertiary thinking to make sure we were getting all the juice and stuff out of it.” Wraith tells us.

We asked both Wraith and Paik for some background on how Ford handled this project internally. Ford knew it couldn’t screw this one up.

“Bronco naturally had a lot of eyes on it in the company … but all of your children are important to you, but, you know, some of them get better grades,” Wraith tells us laughing, referencing how the company treated the Bronco and Bronco Sport versus the rest of the lineup.

The design team that worked on Bronco Sport was tight, consisting of approximately three to four designers on the exterior, and the same amount for the interior. Secrecy was vital, as it is in every new car project. But as we know and see, leaks were in extra high demand for a vehicle like the Bronco.

“There was no shortage of motivation for this. Just to be on a nameplate design like this was motivation enough for all of us to stay late, come in early, do what we had to do,” Paik says. 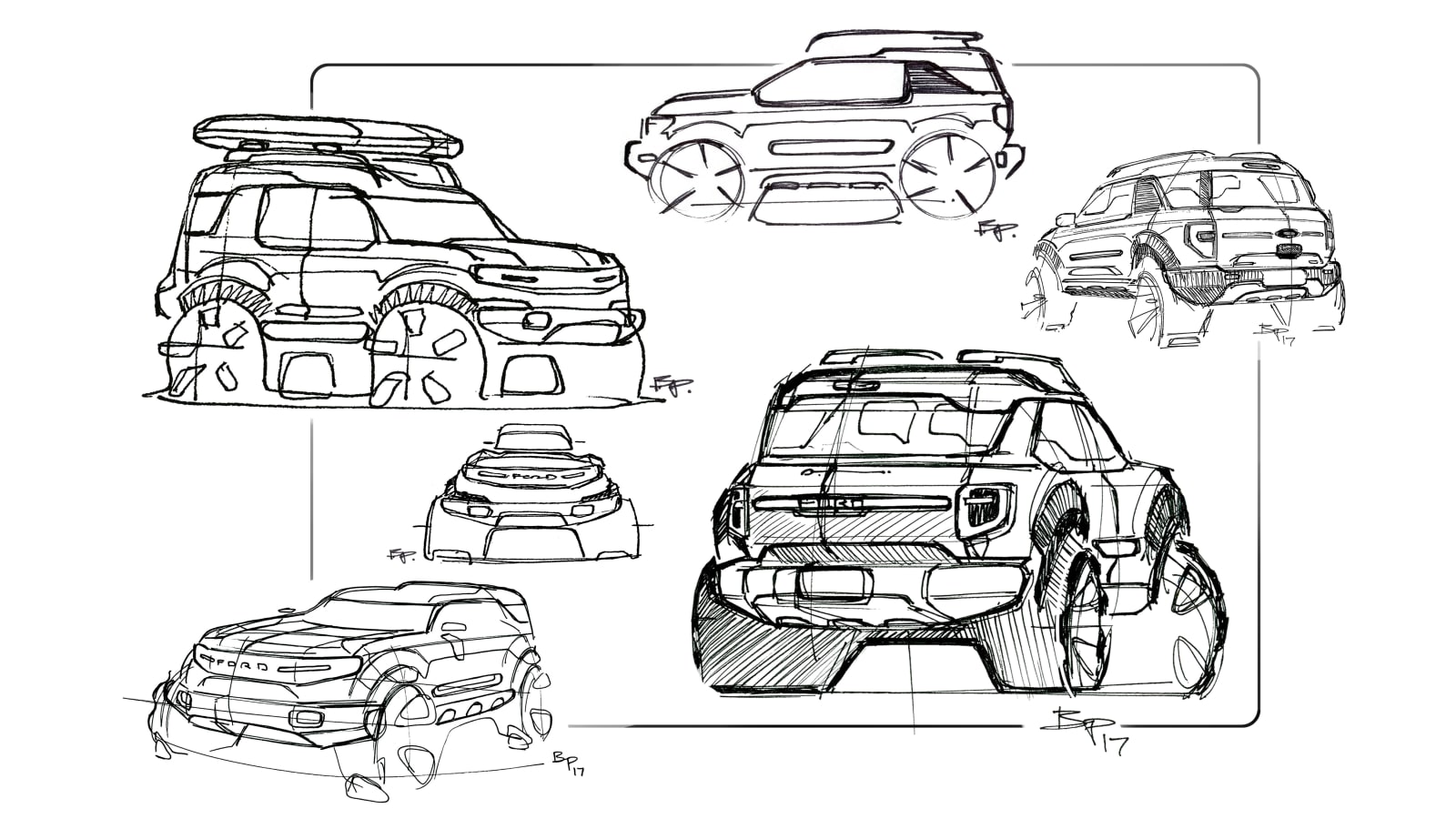 “What has been stunning about all the Bronco work is that throughout the entire organization,” Wraith says, “there’s this level of questioning where we’re saying: Well that’s good enough normally. Ya know it’s a very high standard within the industry. But ya know what it doesn’t feel right for is Bronco. Should we do something else?”

The result of all this hard work is a little crossover that looks and goes like a vehicle with the Bronco name should. There’s such a strong resemblance appearance-wise between the Bronco Sport and big Bronco. Paik was the designer who originally sketched out the Bronco Sport, and his vision has translated to reality.

“Normally when you pick your battles, you kind of accept that you’re probably going to lose a few on the way, but what I’m happiest about is that vision that Brian offered up in the early days is now turning up in dealerships,” Wraith says.

For more on the Bronco Sport’s engineering and how it drives, check out our first drive review that published earlier this morning.