Hindenburg, which accused Nikola, now does the same to Lordstown Motors

2021 Porsche Taycan base model gets its official EPA ratings

Joey Ruiter's Consumer Car is hyper-minimalist and for sale

ANN ARBOR, Mich. — It takes a car-minded person, or even someone well-versed in BMW, to really notice an Alpina in passing. The Bavarian tuner, which trades solely in BMW, doesn’t plaster its performance-enhanced cars with carbon fiber or overwrought aerodynamics. Instead, there are subtle, Alpina-specific design cues: special wheels and lower body work, plus Alpina badging, including the additional “B” in the model designation. It all looks consistent for a BMW, but if you look long enough, you can pick out an Alpina in a parking lot, especially if you’ve spent a lot of time looking at the BMW models they’re based upon.

But for a sub-brand that has historically dealt in cars — with the 7 Series-based B7 long being the only offering in the United States — Alpina has now given its special treatment to BMW’s flagship SUV, the X7. The Alpina XB7 tops the X7 lineup in terms of power and price, and carries on with a tradition of tactful styling and sterling quality. While BMW didn’t exactly hold back when penning the X7, Alpina didn’t go overboard with anything … except maybe performance. It’s a superlative BMW that somehow has nothing to prove.

Alpina’s visual upgrades to the already-flashy X7 are tasteful. If you can pry your eyes from that massive kidney grille, you can see the Alpina has tweaked the front fascia, notably adding its name/logo to the very lower lip of the bumper as in its past creations. While our tester wore the 21-inch Alpina Dynamic wheels shod in Pirelli winter tires, the optional 23-inch, 20-spoke Alpina Classic turbine wheels are more certain to catch the eye of other drivers while still being, well, classic. Seriously, they’re rad. In back, the XB7 sports a rear diffuser flanked by quad stainless steel exhaust outlets that promise to give the Alpina a voice all its own.

Inside, we see more special touches. The Alpina emblem on the steering wheel — a coat of arms containing a pair of velocity stacks and a crankshaft side by side on a red and blue field — is the first thing to catch one’s eye when sliding into the driver’s seat. Our tester came upholstered in ivory Merino leather with Alpina-specific Myrtle Wood trim that’s roughly the color of Mars. There’s another Alpina logo etched into the trim on the passenger’s side of the dash as well as on the iDrive wheel interface, plus a metal plaque affixed to the cover of the cubby containing the cupholders below the center stack. Our vehicle featured second-row captain’s chairs and the LED panoramic “Sky Lounge” roof that gives it an ambient, digital starlight look at night. It looks classy, not saucy. 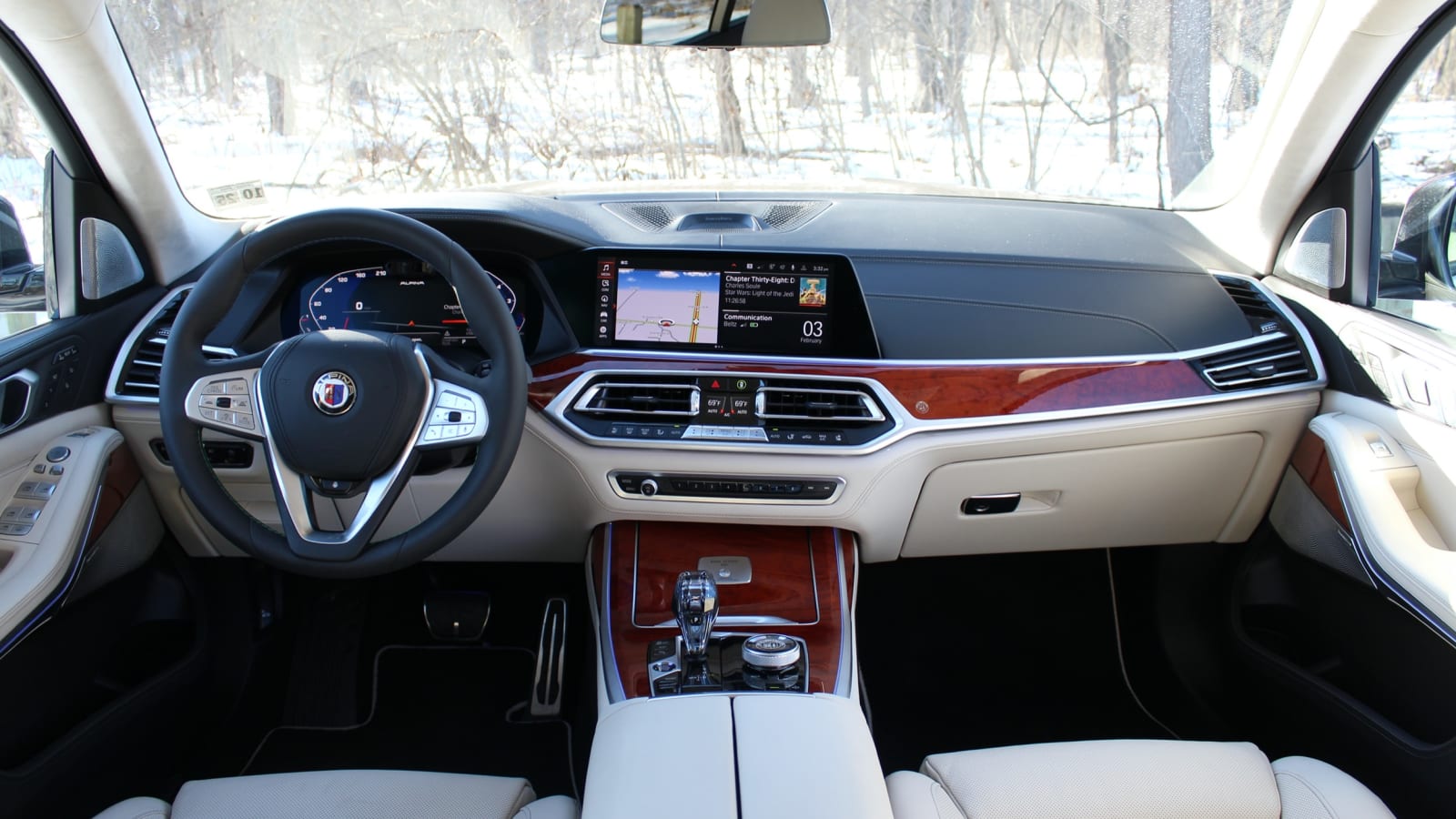 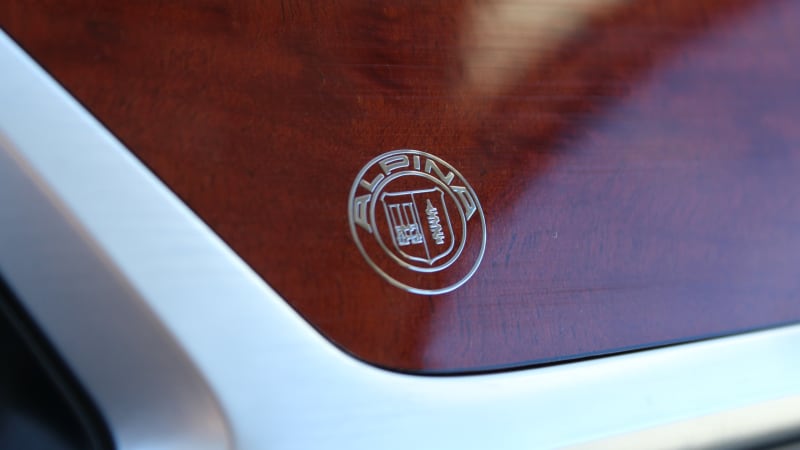 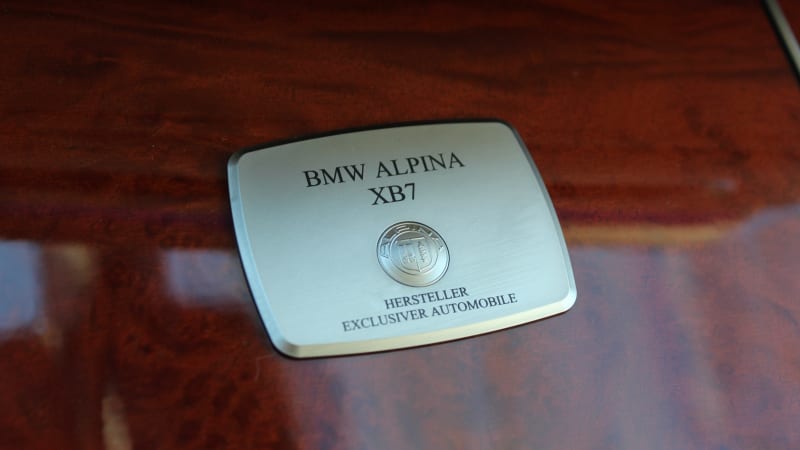 But the visual changes are truly secondary to what really defines the XB7’s personality. The most important work Alpina performs is mechanical. For the XB7, it took BMW’s 4.4-liter V8 and tuned it to an impressive 612 horsepower peaking from 5,500-6,500 rpm, and 590 pound-feet of max torque available from 2,000-5,000 rpm. Remember, much like the 7 Series, there is no M version of the X7: the Alpina is the most performance-oriented version available. Alpinas have always been less hardcore than M cars, more about Autobahn road trips than Nurbürgring track days, which definitely seems appropriate for a three-row SUV.

Alpina also applies its own “Switch-Tronic” tuning to the eight-speed automatic to manage that power in quick, smooth shifts. That goes to all four wheels via an Alpina-calibrated version of BMW’s xDrive all-wheel-drive system. Alpina also tuned the two-axle air suspension for a smoother ride with sportier handling, plus a lower ride height in the Alpina-exclusive Sport mode.

You’re probably wondering what all this costs, and you might not be surprised to learn that it’s a lot. The Alpina XB7 starts at $142,295, which includes BMW’s relatively reasonable $995 destination fee. For that princely sum, though, you get a lot. The upgraded powertrain, suspension, exhaust, brakes and extra-special comfort features like heated armrests, massaging front seats, remote start, the hands-free traffic jam assistant, head-up display and heated and cooled cupholders are baked in as standard. Our tester’s sticker price totaled $156,345, which included an upcharge for the Ametrin Metallic paint ($1,950), the white Merino leather ($1,500), a rear-seat entertainment system ($2,200), a Bowers & Wilkins sound system ($3,400), five-zone climate control ($800), those captain’s chairs ($500), the trick LED sunroof ($750), and the 23-inch wheels ($2,600) that are probably sitting in a garage somewhere until late spring. 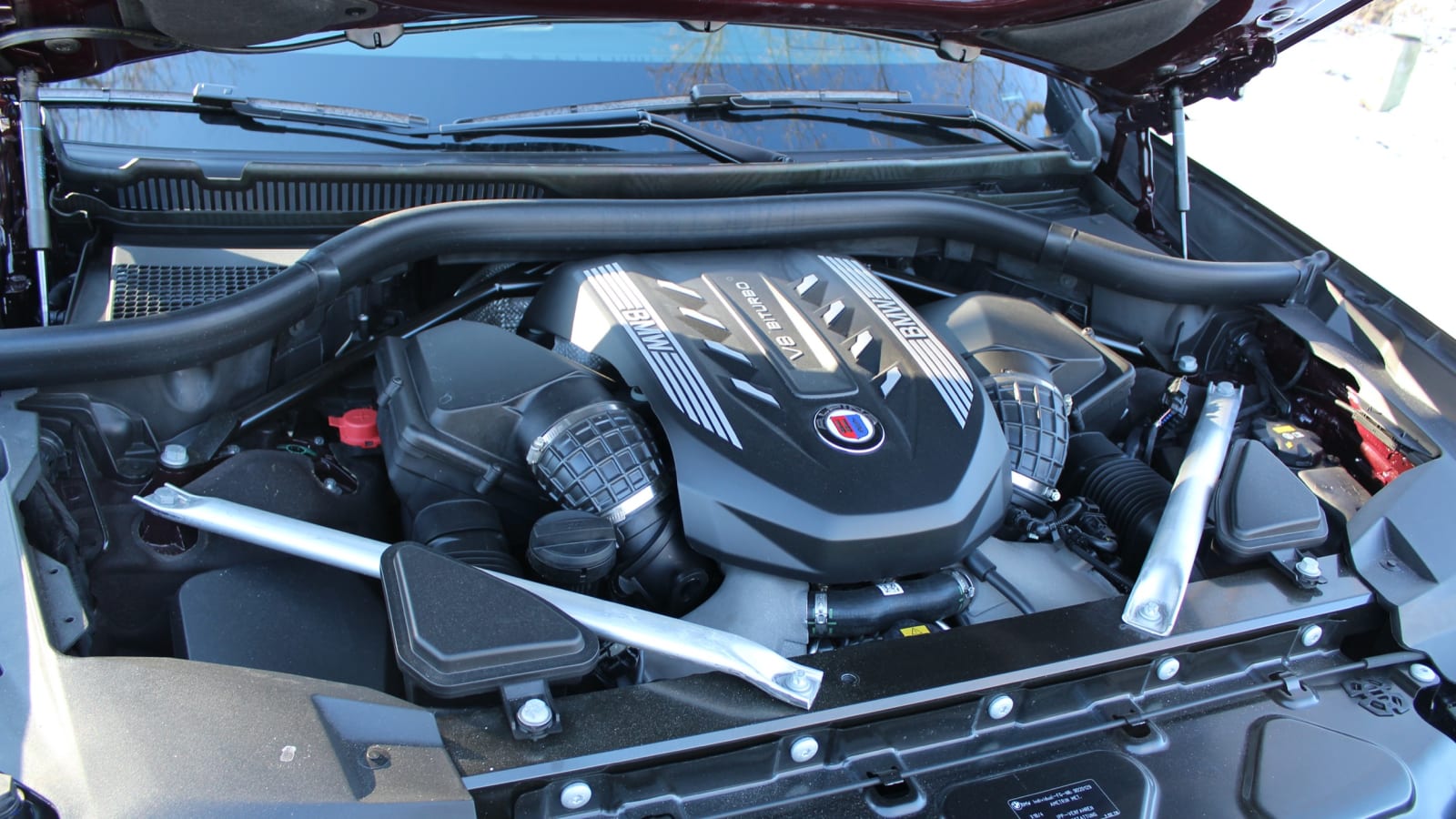 I didn’t tread gingerly with the XB7 in the snow — this big boy felt as confident as you’d expect an X7 to feel in inclement weather — but I didn’t exactly flog the thing, either. The high ride and all-wheel drive handle the powder just fine, and the winter tires helped this 5,860-pound behemoth tread solidly and brake quickly on the packed snow. In fact, much of our driving, done within the bounds of sanity and prudence on public roads, was uneventful. In casual, everyday driving, little of the Alpina personality shines through. If you pay close attention, you begin to notice what you don’t notice; things like noise, vibration and body roll are kept in check brilliantly. Kudos to the adaptive suspension in particular. When running errands, we could easily forget about the 612 horsepower and the gearshifts happening quietly in the background.

A well-timed green light on the right road or a highway on-ramp may help you remember, though, that this is the sportiest version of the X7 you can get, by far. When asked, the Alpina XB7 springs to life, hurling forward with a brappy growl issuing from the exhaust. Oh yeah, it reminded me as the roads began to clear up later in the week, this thing can party.

Eventually, there was enough dry pavement on some decent roads to wake up this sleeping giant. After putting it into Sport mode at a stoplight, watching the body settle down onto its haunches helps set the tone for what’s about to happen. Slam the gas, and the XB7 leaps to life, with the twin-turbo V8 kicking you back into your seat. BMW claims a 0-60-mph time of 4.0 seconds, which, for something weighing almost three tons, is a testament to Alpina’s powertrain tuning chops. It pulls hard from the get-go and through the mid-range, just tapering off subtly high in the rev range. The transmission manages swift shifts without interrupting the feeling of utter speed. It’s smooth, refined, even polite as it pulls your scalp rearward. The exhaust note — aggressive, but not overly intrusive — is the final ingredient to this rich reward.

We didn’t fling the XB7 around corners at full tilt, but It felt adept at managing its bulk as forces acted upon it from their various vectors. The suspension managed to keep me from sliding around in my seat as the XB7 mitigated body roll and managed the chassis’ relationship with the crumbling pavement beneath it. The tuning that manages comfort in herky-jerky city traffic does an equally adept job at providing poise when one decides to take advantage of the power at hand.

Our Alpina XB7 arrived one snowstorm after our slushy week with the Mercedes-Maybach GLS 600, so it’s nearly impossible not to draw comparisons. While the Mercedes-AMG GLS 63 might be a more directly analogous, the Alpina seems to blend a bit of the ethos of both AMG and Maybach, and then translates it into a Bavarian dialect. There’s no denying that Alpina puts performance at the forefront, but it doesn’t do so at the sacrifice of class. The XB7 is more temperate in its styling than the brash AMG and certainly the opulent Maybach (that two-tone paint, man!). It doesn’t shout at you with carbon fiber and severe lines, but it also doesn’t ply you with throw pillows and a champagne fridge. Alpina, instead, rewards its driver with the kind of comfort that doesn’t quite cosset, and the kind of performance that doesn’t wage war on the occupants’ senses. And that somehow makes this $140,000, 612-hp crossover seem … well, practical is not the right word. “Good value” isn’t right, either. How about “a more tasteful middle ground than its Mercedes competitors”?

If you have the means and are looking for a usable but remarkably potent German ute, the Alpina XB7 delivers. If you need your full-size crossover to precede your personality — whether you’re an aggressive person who needs an aggressive ride (AMG), or want to indicate that you’ve probably got a thing for decorative fountains (Maybach) — Mercedes has some very good options for you. If you like nice, fast, comfortable things, but don’t need your three-row vehicle to make a bold statement for you, try the Alpina. Just be ready for the rush when the pedal hits the floor.