Today’s BMW 5 Series doesn’t have the same mission statement as it did a decade or two ago. For years, the German automaker’s middle sedan was designed to be the absolute sharpest tool in the luxury car shed. Its steering was perfect, its ride was crisp and its engines were punchy. In short, it was meant to be the most rewarding sports sedan that money could buy. And for years — particularly over the course of the E39 glory days — that’s exactly what it was.

Somewhere along the way, the 5 Series’ foremost objective shifted as the sedan morphed into a rolling showcase of BMW’s technological know-how, even if that meant the actual driving experience was numbed and dumbed to match the shifting tastes of luxury car buyers. Thing is, as much as enthusiasts bemoan the effects that cutting-edge technology has had on the feel behind the wheel, the fact of the matter is that the 2021 BMW 540i is a very pleasurable car to drive, and it is measurably the best mainstream 5er that has ever rolled down the line.

The 2021 BMW 5 Series represents a meaningful refresh on the last clean-sheet redesign that we first tested in 2017. The pointy ends have been restyled, making it a little over an inch longer than before. The kidney grille is now one conjoined piece instead of two and more prominent for 2021, but thankfully not comically so like the latest 4 Series. The headlights have also been pinched and pulled more taut.

Our tester looked stately in white, only slightly livened up with Y-spoke wheels with red calipers. The 5 Series remains distinguished, but not over-the-top, like some of BMW’s crossovers. 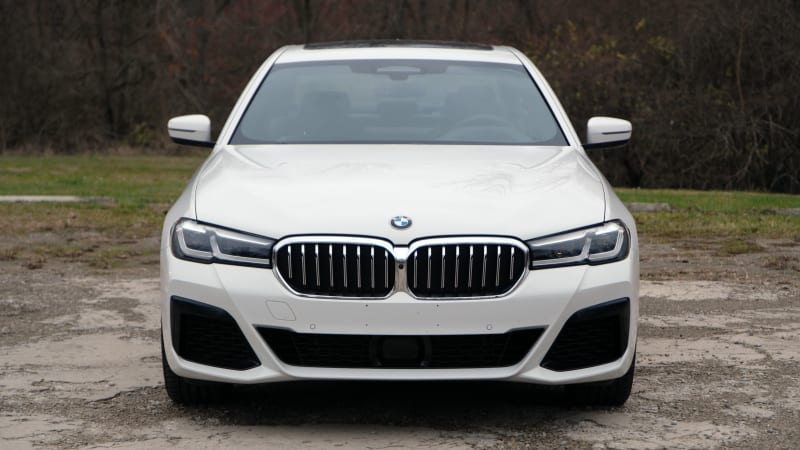 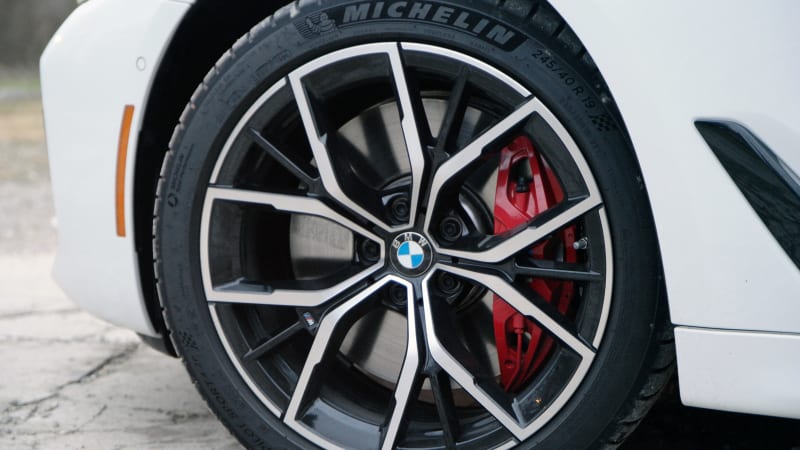 Inside, the angles and forms are a bit more severe than the previous 5 Series, but the overall look is calmer than the decadent, and frankly nicer, Mercedes-Benz E-Class. Most will say the Mercedes is more luxurious in its presentation, while the Bimmer is more subtle.

Dual 12.3-inch displays dominate the dashboard, one directly in front of the driver delivering need-to-know data in between digital speedometer and tachometer gauges that change in design based on the driving mode. The other is in the center running BMW’s latest iDrive 7 infotainment system. Apple CarPlay and Android Auto are standard, as is navigation. There are real tactile buttons for the climate control and audio system, along with the automaker’s well-known control knob on the center console with accompanying menu buttons.

You can read all about iDrive 7 here, but in short, there are still a lot of layers but it’s mostly logical in layout and relatively simple to learn. We especially appreciate that it can be controlled through both the touchscreen and the wheel-shaped knob. 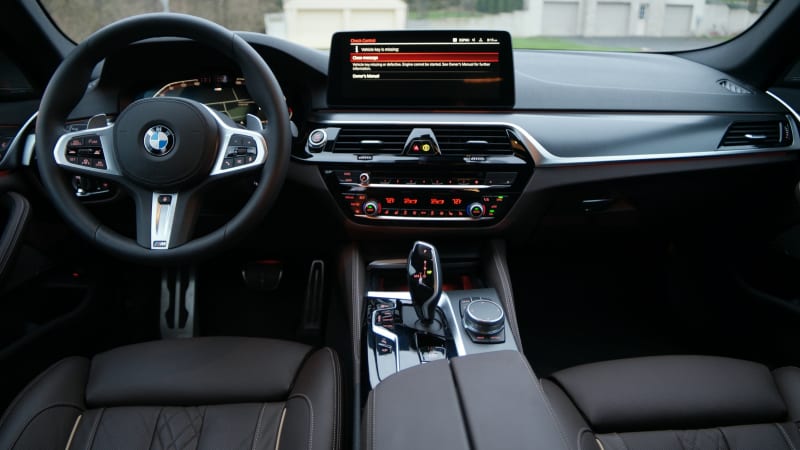 Besides the primping and prodding inside and out, the big news for the 2021 540i is a mild-hybrid powertrain that incorporates a 48-volt electrical system. The little electric motor adds a little more than 10 horsepower to the car’s rating of 335 horsepower and 331 pound-feet of torque, so the vast majority of thrust is provided by a 3.0-liter turbocharged inline-six-cylinder engine. Those ponies are sent to the rear, or, as was the case with our 540i xDrive test car, all four wheels through an eight-speed automatic transmission.

BMW quotes a 0-60 time of 4.6 seconds for the 2021 540i xDrive (three tenths quicker than the rear-drive version), which is quite good. That’s about the same as the previous non-hybridized version, but we found that the extra push from the electric motor smoothed out the overall feel of the turbocharged powertrain, particularly right off the line, and before and after gearshifts. There are steering wheel shift paddles and a manual mode for the transmission, but the electronic brains are so good in the default and Sport modes that they aren’t really needed.

The mild hybrid powertrain helps the 2021 540i xDrive’s fuel economy improve to 23 mpg city, 31 mpg highway and 26 mpg combined. Compared to the non-hybrid 2020 model, that’s 1 mpg better in the city and combined ratings and two better on the highway. It’s also 1 mpg better than the Mercedes-Benz E 450 4Matic’s highway rating and better than a comparable Audi A6’s ratings across the board, making the BMW a segment leader in fuel efficiency. It’s also worth noting that the less powerful 530i xDrive’s EPA ratings of 23 city and 32 highway mean there’s no great sacrifice to the extra power of the 540i’s six-cylinder engine.

The 2021 5 Series’ ride is smooth and refined. We never hit a bump that upset the chassis, and it remains commendably flat through hard corners. The sedan tackles corners and maintains bearing in a way that will please enthusiasts, yet won’t leave them or their passengers feeling queasy during aggressive maneuvers. Its steering offered proper, substantial feedback that we found feels rewarding and engaging when hustled at speed but overly light the rest of the time. It may not move its driver in the same way as the E39 or E60 vintages did, but compared to its present-day peers, the 2021 5 Series’ manners are mostly without fault.

We did find fault with the latest generation of BMW’s driver assist features, however. The automated cruise control system works well, keeping a good (and adjustable) distance even down to a complete stop, but BMW’s Active Lane Keeping Assistant trails that of its competitors. In our week-long experience, the 5 Series tended to pogo from one side of the lane to the other and oftentimes just disengaged entirely, even on relatively straight roads with clear lines and markers. After much fiddling and irritation, we turned it off.

Pricing for the comparable Mercedes-Benz E 450 4Matic sedan is basically equal to the 540i, and in keeping with history, the Audi A6 undercuts them both by a few thousand. Of course, very few of these luxury sedans are ever sold without any options, and pricing rises dramatically with just a few clicks of the mouse. An example like our test car, blessed with the M Sport package, driving aids and a few packages will cost around $75,000.

Besides a few nitpicks, we really enjoyed our time in the 2021 540i xDrive. When this sedan is at its best, it is the perfect bridge between the 3 and 7 Series, combining power with the right balance of agility and luxury features. If push were to come to shove, we’d pick an E-Class over the 5er, but we’d completely understand if someone were to prefer the more subtle touch of the BMW over Mercedes’ slightly more ostentatious take on German luxury.

The 2021 5 Series is not what it used to be, because of course it isn’t and neither is anything else. What is is, though, is a grown-up, state-of-the-art and state-of-the-times sedan with all the bells and whistles. Smooth, comfortable, quick and serene, but just a notch below the prettier E-Class on our luxury chart.