Travel virtually though cities worldwide with the 'Drive & Listen' app

The best-selling luxury car used to be an Acura. The brand’s combination of reliability, quality, design and driving dynamics clearly resonated with buyers. In the past decade-plus, however, those last two elements stopped resonating, while the Acura brand subsequently lost its luxury luster. Simply put, the 2021 Acura TLX is intended to turn things around. Its look is bold and athletic in a way not seen since the best-selling TL of the 2000s, while its long-hood/short-deck proportions are like no Acura that’s come before. Although they’re usually indicative of a rear-wheel-drive luxury sedan, the TLX remains based on a front-wheel-drive architecture with Acura’s brilliant Super Handling All-Wheel Drive system. A return to a double-wishbone front suspension ensures truly charismatic handling. That architecture is also unique to Acura as opposed to being related to the Honda Accord.

All of the above adds up to a new TLX that’s a far more compelling and competitive luxury sedan. If you’re considering a BMW 3 Series, Audi A4 or Mercedes-Benz C-Class, it’s definitely worth expanding beyond the German borders and giving Acura a try. It’s different to be sure, but different can be good, especially for driving enthusiasts who’ve seen some zest ooze out of the 3 Series in recent generations. Even its interior is suitably luxurious in quality and distinctive in appearance – it looks like nothing else out there and, importantly, doesn’t give off the vibe of an Accord in dress pants. While we’re not ready to declare it any sort of class leader, it’s worthy of playing with the big boys.

The TLX was completely redesigned for 2021. 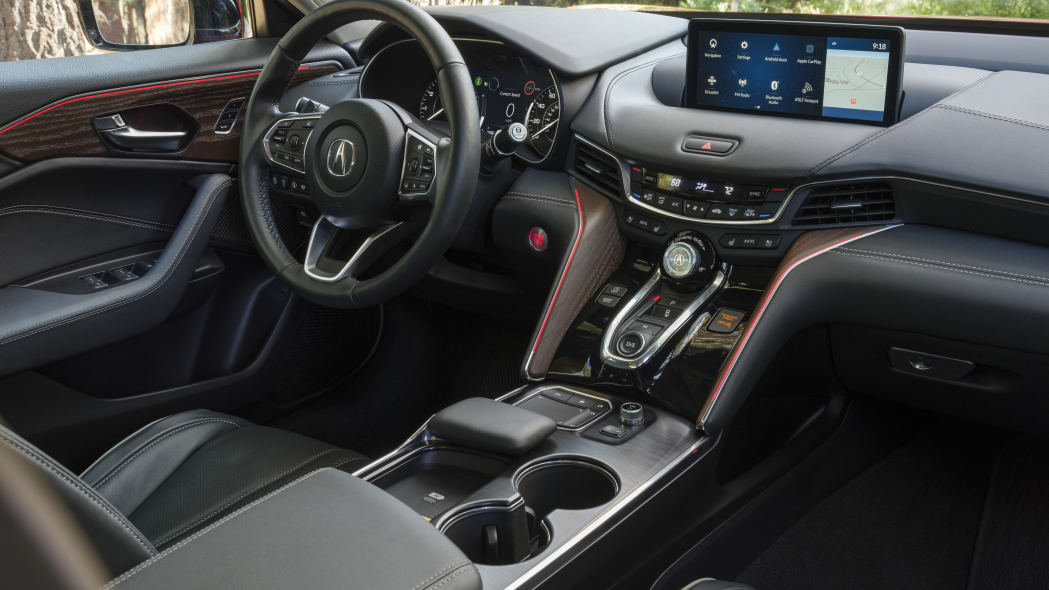 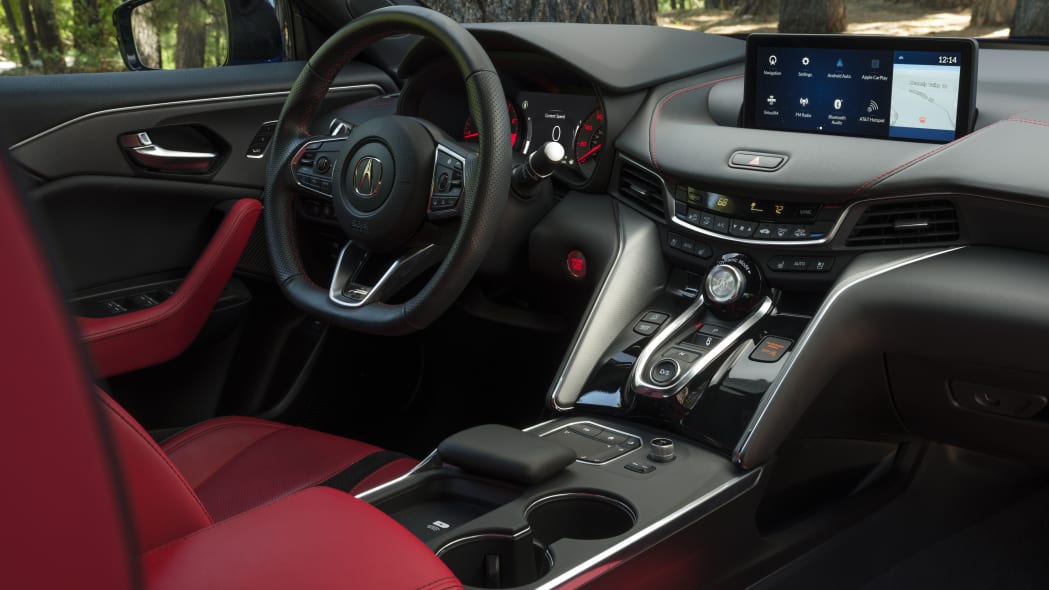 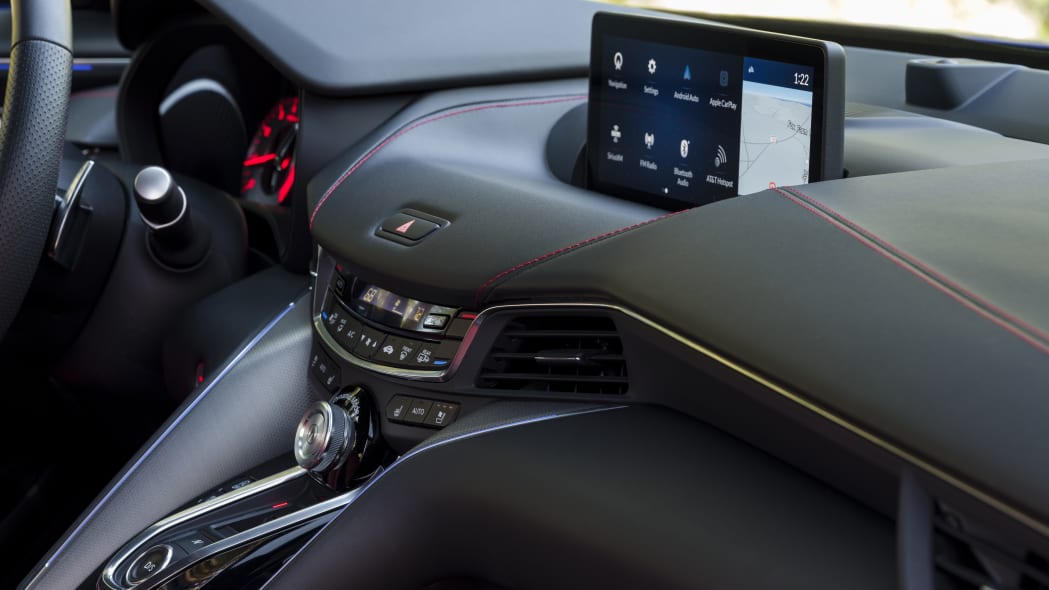 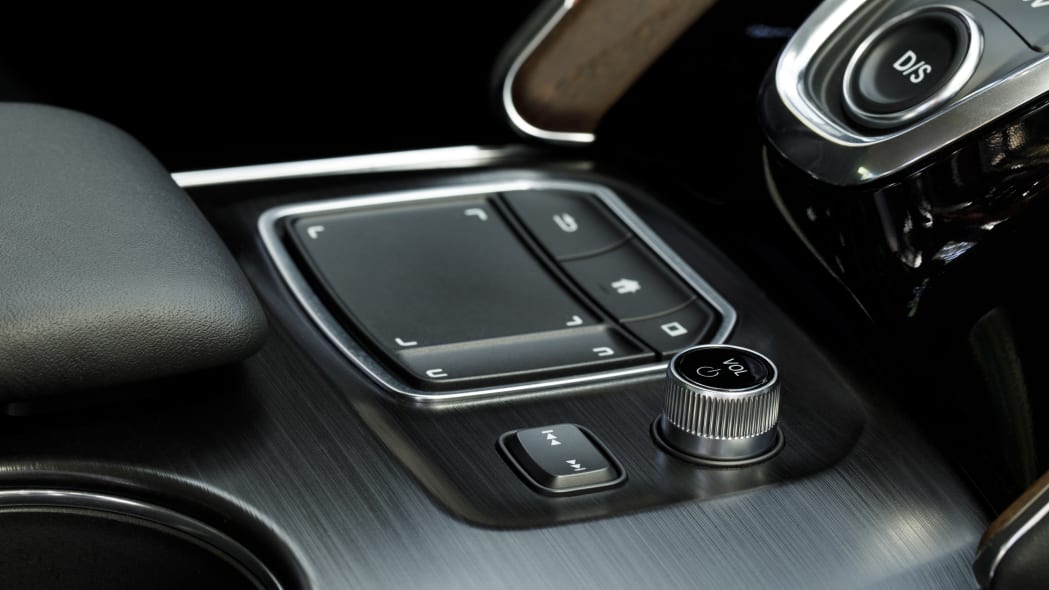 The TLX cabin has a modern, high-tech look that won’t be confused with something in a European luxury sedan. Materials quality is excellent, while padded simulated leather on the dash and doors provides an undeniable air of luxury. There are style differences between trim levels as well, most notably the open pore wood trim and ambient lighting in the Advance (above left) and the A-Spec’s sport gauges, unique aluminum trim and available red leather (above right). There’s still some switchgear shared with Honda – particularly the annoying push-button shifter – but at least Honda makes some nice switchgear.

There are notable, Acura-only exceptions to that. First is the large silver knob prominently placed on the center stack that controls the car’s driving modes. Considering most owners never change driving modes, this “hey look at me!” placement is more about Acura declaring that it’s serious about being a brand for car enthusiasts again than it’s for actual functionality.

The second would be Acura’s infotainment system. It consists of a large, widescreen display mounted high atop the downward-sloping dash. This placement makes it easier to keep your eyes on the road, but we’re not sold on its unique touchpad controller. Basically, the pad corresponds to the screen – if you touch the lower left corner, for instance, you engage whatever is in the screen’s lower left corner. This works in theory, but there are still too many errant presses, only four radio presets can appear at a time, and using Apple CarPlay basically turns the touchpad into a mouse-like controller not unlike Lexus‘ Remote Touch. And believe us, it’s never good to be compared to that infernal thing. In general, though, we think you can get used to this unusual infotainment system, especially since so few competitors have something that’s definitively better or at least simpler. 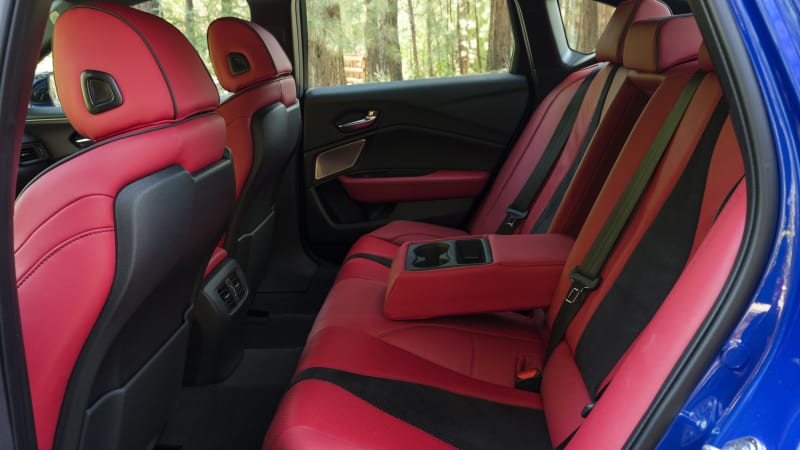 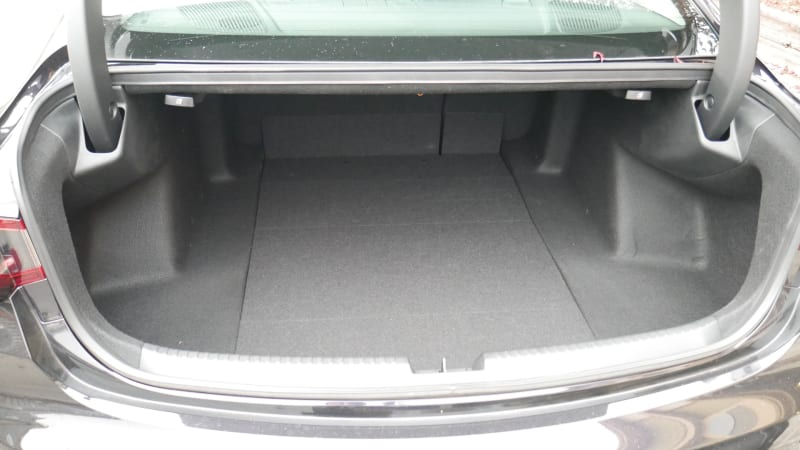 How big is the TLX?

On the outside, the TLX is roughly the same size as a midsize family sedan. Its length is basically within two inches of the shorter Toyota Camry and the longer Honda Accord. That makes it considerably bigger than its primary competitors from Europe … on the outside. Inside, it’s a different story as the dimensions say the TLX actually has a bit less legroom than a 3 Series, Audi A4 or Volvo S60. In practice, however, we were genuinely impressed with the amount of legroom back there and found that we could even mount a rear-facing infant seat without it coming close to the front seatbacks (and we had a 6-foot-3 driver). You can also mount that infant seat in the middle by “borrowing” the outboard seats’ inner LATCH anchors, which isn’t always possible.

Its 13.5-cubic-foot trunk is similarly less than what you’d find in a midsize mainstream sedan, but it’s also better than most of those luxury sedan competitors. In our luggage test, we were able to fit all six bags in the trunk.

Every 2021 TLX comes with the same engine, a 2.0-liter turbocharged inline-four that produces 272 horsepower and 280 pound-feet of torque. That’s one of the largest standard outputs in the segment. A 10-speed automatic and front-wheel drive are standard, but every trim level (or “package” in Acura-speak) can be paired with the exceptional torque-vectoring all-wheel-drive system dubbed SH-AWD.

If you’re at all interested in the TLX as a sports sedan, it quite simply needs to have the available Super-Handling All-Wheel Drive system (SH-AWD). Now in its fourth generation, this pioneering AWD system has the ability to transfer power between the left and right wheels, in addition to the normal front-and-rear distribution. This torque vectoring capability allows for tremendous grip, mitigates understeer and whips the TLX around corners. It’s both fun and confidence-inspiring. It also provides the TLX with something its rear- and all-wheel-drive competitors cannot match. The available adaptive dampers are less of a must-buy, but their ability to stiffen the suspension for sharpened handling or soften it to ensure a smooth ride certainly makes them worth considering. The stiffness of the base suspension is effectively in between the adaptive setup’s Normal and Sport settings.

Other updates for 2021 include the return of a more sophisticated double wishbone front suspension, which further improves grip as well as benefitting steering feel and response. The steering itself is also quicker and receives a variable-gear-ratio to make it even quicker as speeds increase and/or you engage Sport mode. We weren’t fans of either the Normal or Sport steering settings when driving on our mountain road test route: Normal isn’t quick enough, Sport is too stiff and neither has enough feedback. Sometimes choice isn’t better.

As for the engine, it delivers the sort of low-end punch expected in a segment that almost exclusively comes standard with 2.0-liter turbo-fours. Its output is greater than most, however, and it possesses the same sort of mechanical snarl at upper rpm that has long been an Acura/Honda hallmark. The 10-speed automatic does a fine job of smoothly changing amongst its many gears, but it’s clearly not a performance-minded transmission. When in Sport mode, it doesn’t downshift as readily when braking as those of other carmakers and it’s far too quick to upshift into fifth or sixth while driving enthusiastically. We ended up using the paddle shifters, but that’s often not necessary with competitors.

What more can I read about the Acura TLX?

Our first drive review of the new TLX, including more in-depth information about its engineering and design. 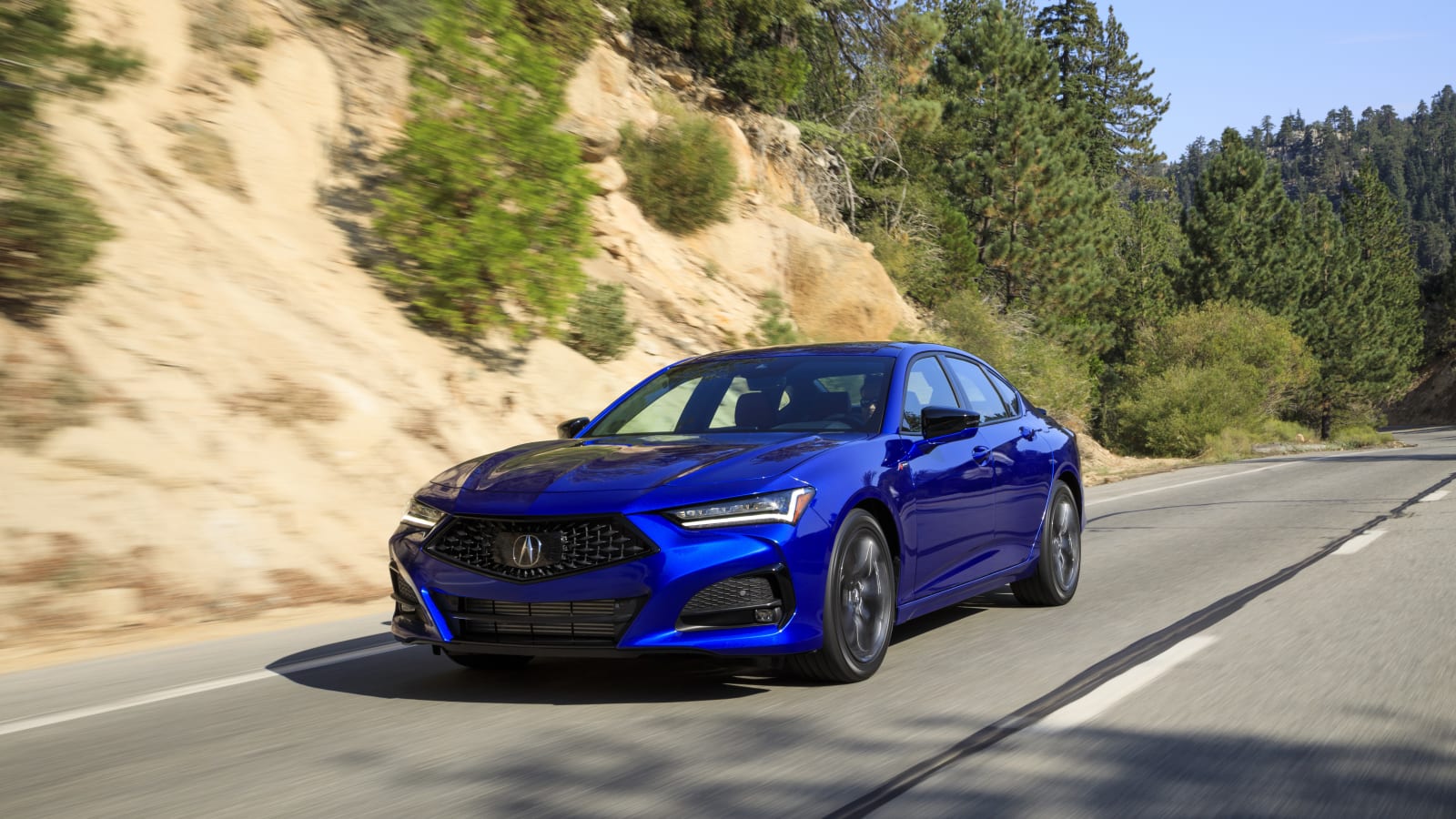 We find out how much fits in the TLX’s 13.5-cubic-foot trunk. 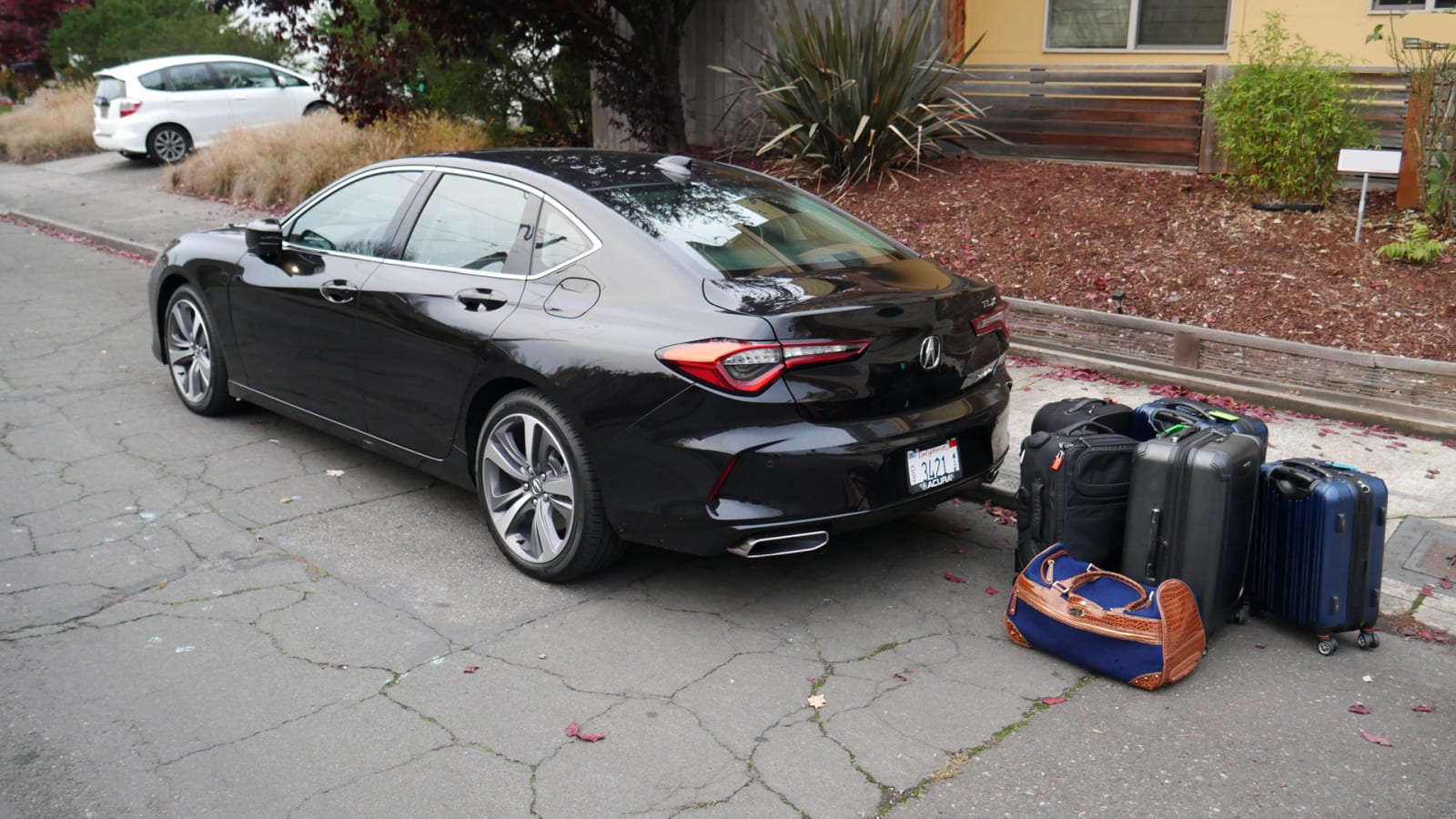 Pricing for the 2021 TLX starts at $38,525, including the $1,025 destination charge. There are then three “packages,” but for all intents and purposes, they are akin to the trim levels offered by other car makers. It’s not like you can mix and match them, nor are there additional options beyond SH-AWD, which can be added to any of them for $2,000.

All of the packages thereafter add blind-spot and rear cross-traffic warning, parking sensors, integrated navigation, an upgraded Panasonic/ELS sound system (be it 13 speakers with the Technology package or 17 with the others), GPS-linked climate control, leather upholstery and ambient lighting. With the exception of its foglights and ventilated front seats that are shared with the Advance package, the A-Spec largely adds unique, sportier appearance upgrades. The Advance additions include the adaptive suspension, a head-up display, extra driver’s seat adjustments, heated rear seats and steering wheel and real wood trim.

What are its safety features?

The TLX had not been crash tested by a third party at the time of this writing.