Travel virtually though cities worldwide with the 'Drive & Listen' app

Maybe you’re one of the few who finds the BMW X6 to be more attractive than the X5. Well, form in the car world comes with compromises to function in many cases. Opting for the “coupe” version of this BMW crossover pair is one of those cases. BMW claims the X6 (including the X6 M Competition model pictured here) has 27.4 cubic-feet of space behind the second row (slightly better than the previous generation X6), which is 6.5 cubes fewer than an X5.

When you look at it that way, the X6’s compromise looks relatively minor. But as is the case with just about every luggage test we perform, numbers don’t tell the whole story. The X6 loses some of its utility by imposing a high load floor and an angled rear hatch line that doesn’t look conducive to stacking boxy suitcases. The X6 also lacks the X5’s handy two-piece hatch with the bottom edge folding out for easy loading or a quick seat. BMW tries to make up for this in the X6 with a voluminous underfloor storage compartment, but it’s mainly just useful for odds and ends. Let’s get to testing. 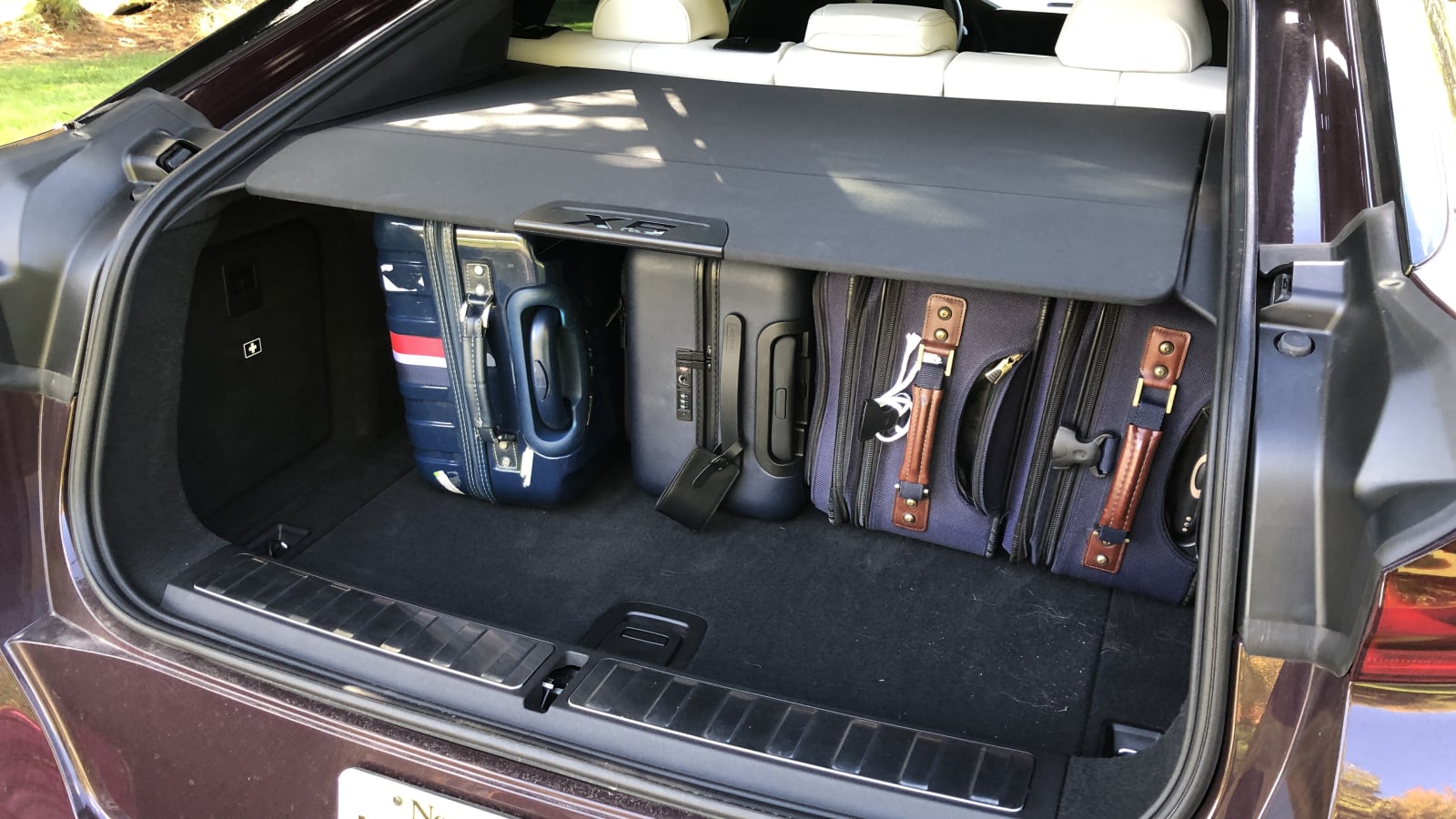 To start, we chucked in the three carry-on suitcases and the one medium-sized suitcase. All four of these fit without issue, leaving an abundance of space in front of them for other odds and ends. You can put the cargo shade down over them, too. We tried to stick one of the full-size suitcases in front, but the wheels proved to be too large for the hatch to close. However, a slightly smaller suitcase could fit in front there. We’ll give some kudos to BMW for making the closing height halfway decent with this body shape. It’s slightly better than expected. 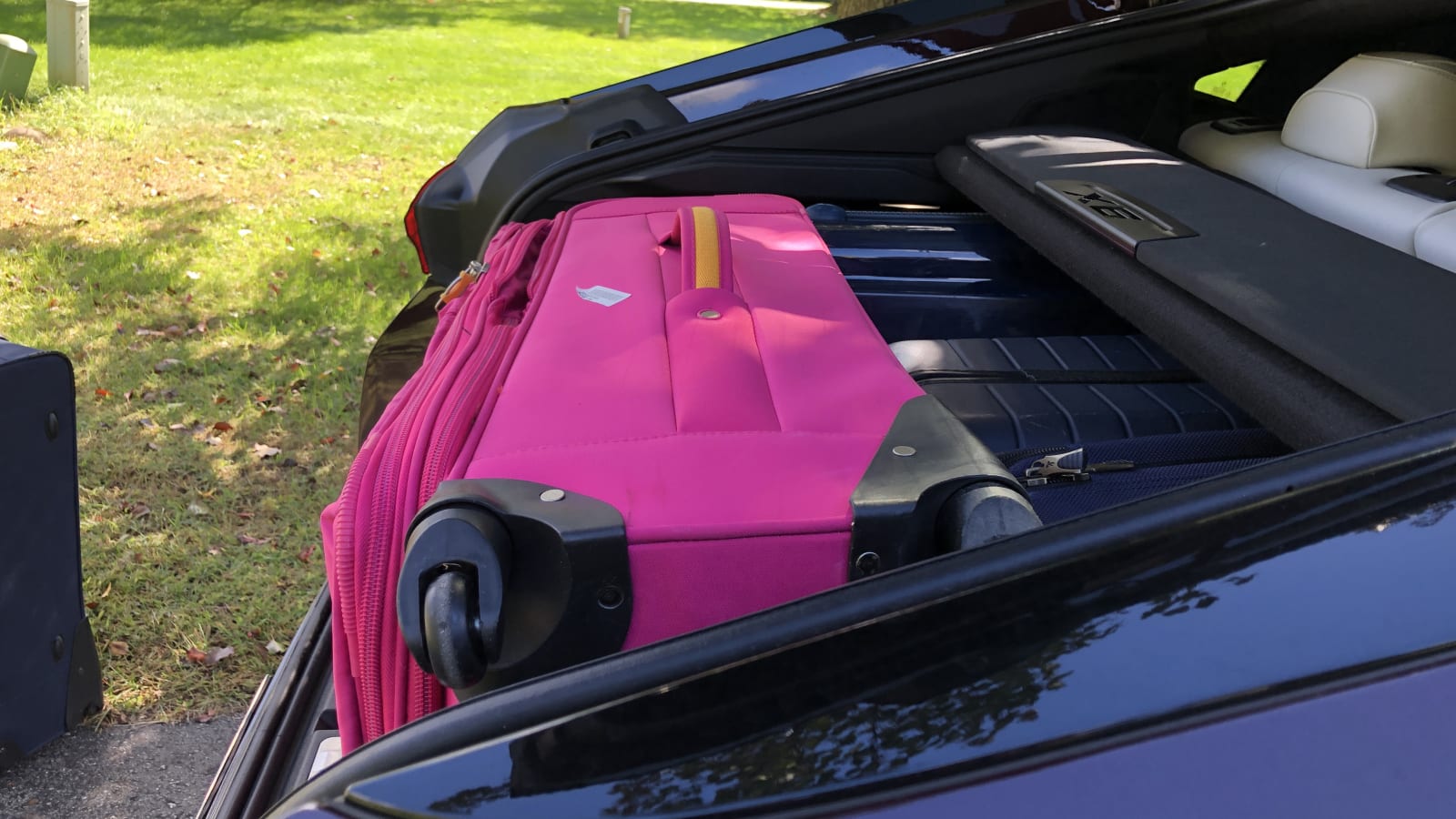 Configuration number two is below. You’ll see that two carry-on suitcases can be stacked and still fit under the cargo shade. Not only that, but a full-size suitcase comfortably fits next to them. This leaves the front open for the last carry-on suitcase with a tiny space remaining. In that space, we squeezed in the fancy bag (22L x 8.8W x 12D). The hatch closes without issue. 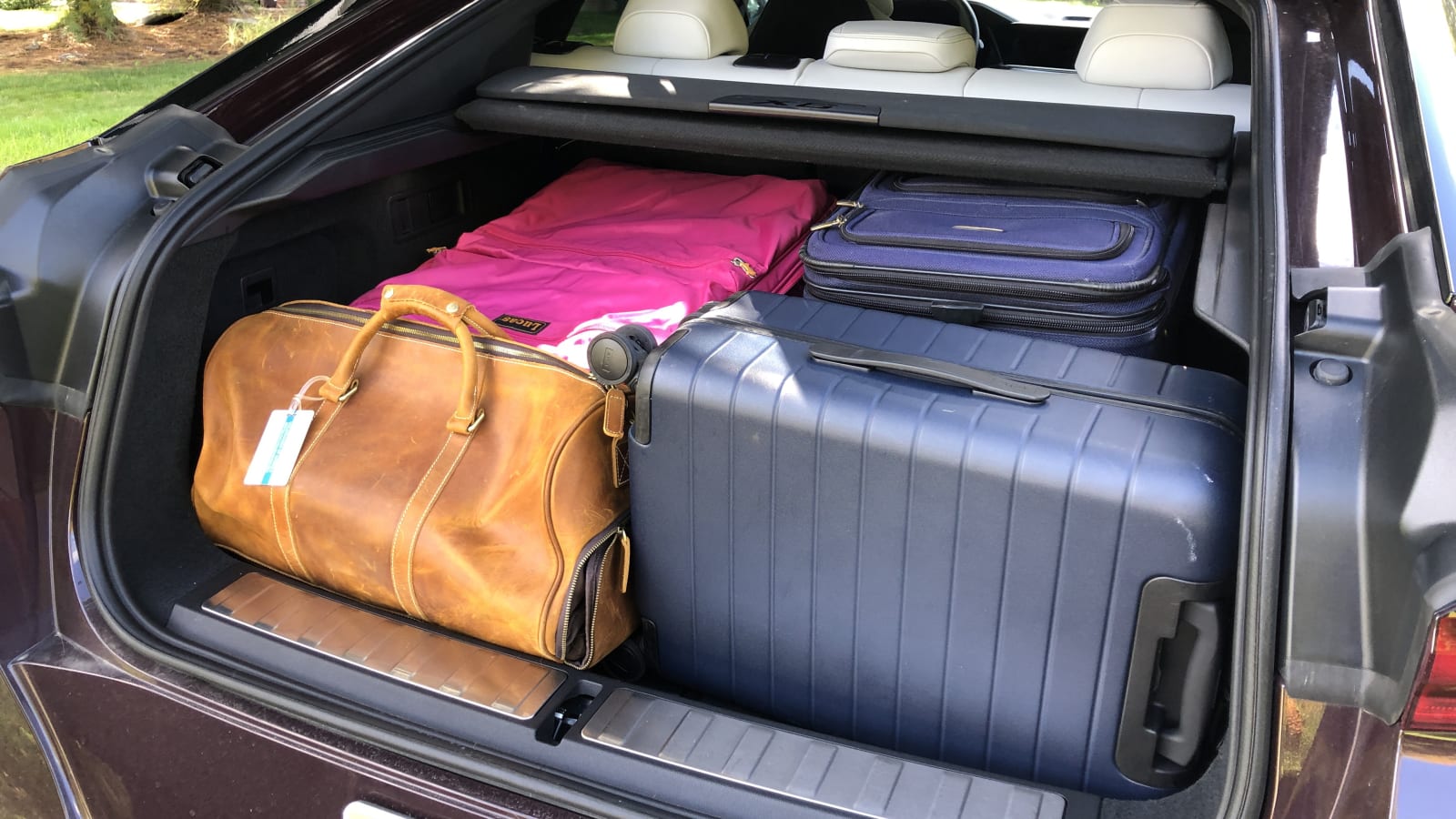 But then we decided to remove that cargo shade to see what maximum capacity looks like. With it gone, you can stack the second full-size suitcase on top of the other. However, this intrudes on the fancy bag’s previous space too much, squeezing it out. We moved that to sit on top of the stacked carry-on suitcases, and voila, the hatch closes. It’s tight, as you can see below, but it does work. Put anything larger than the fancy bag on top of the double stacked carry-ons, and it’s a no-go. 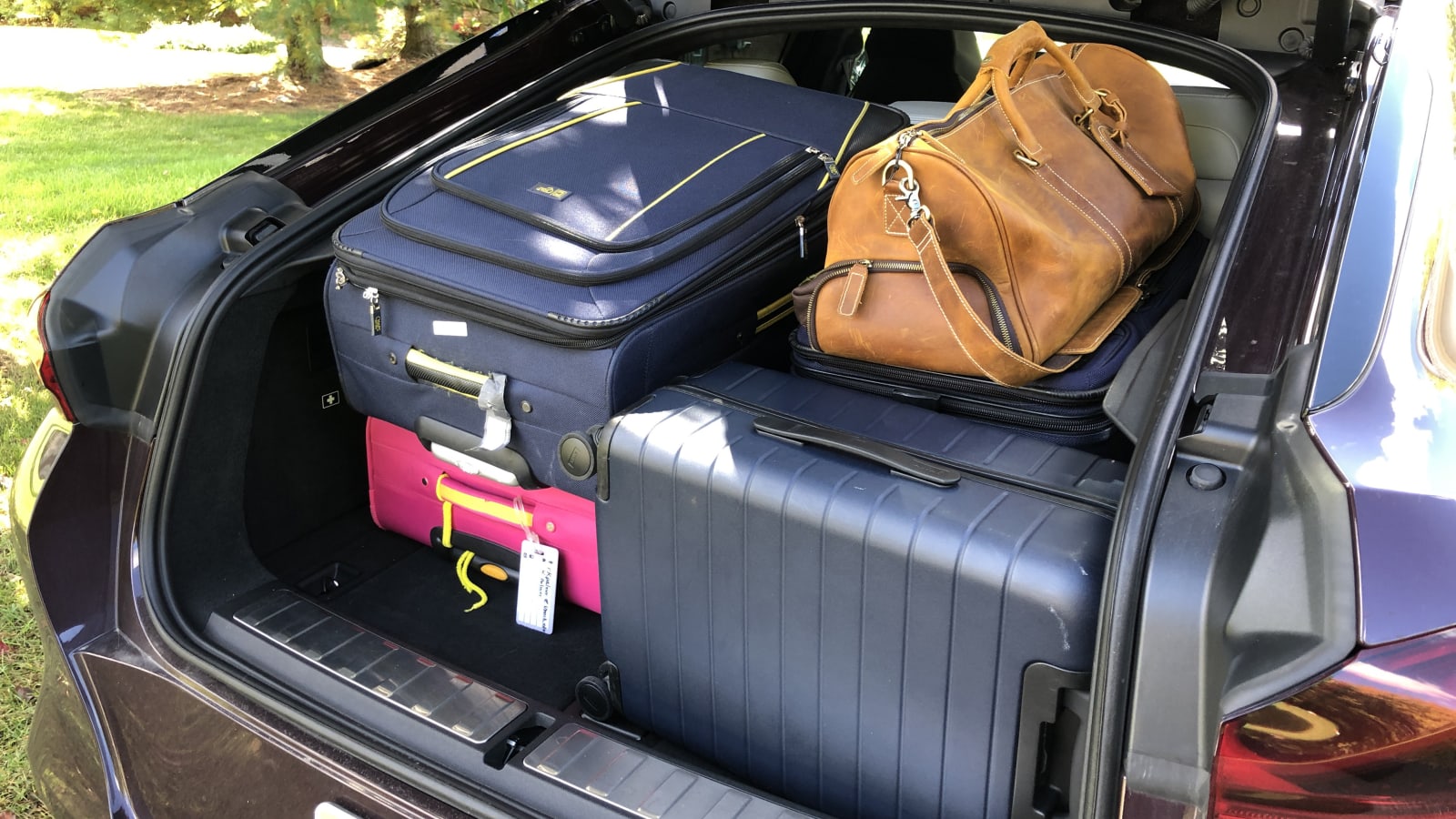 If that still isn’t enough, the rear seats fold down 60/40 style from pull-tabs in the rear hatch or on the seatbacks themselves. They don’t go all the way flat, but much more space opens up. In total, you get 59.6 cubic-feet behind the first row. The deficit to the X5’s cargo space grows here, as it’s 12.7 cubes smaller. Chalk that up to the faster roof line coming back to bite utility. 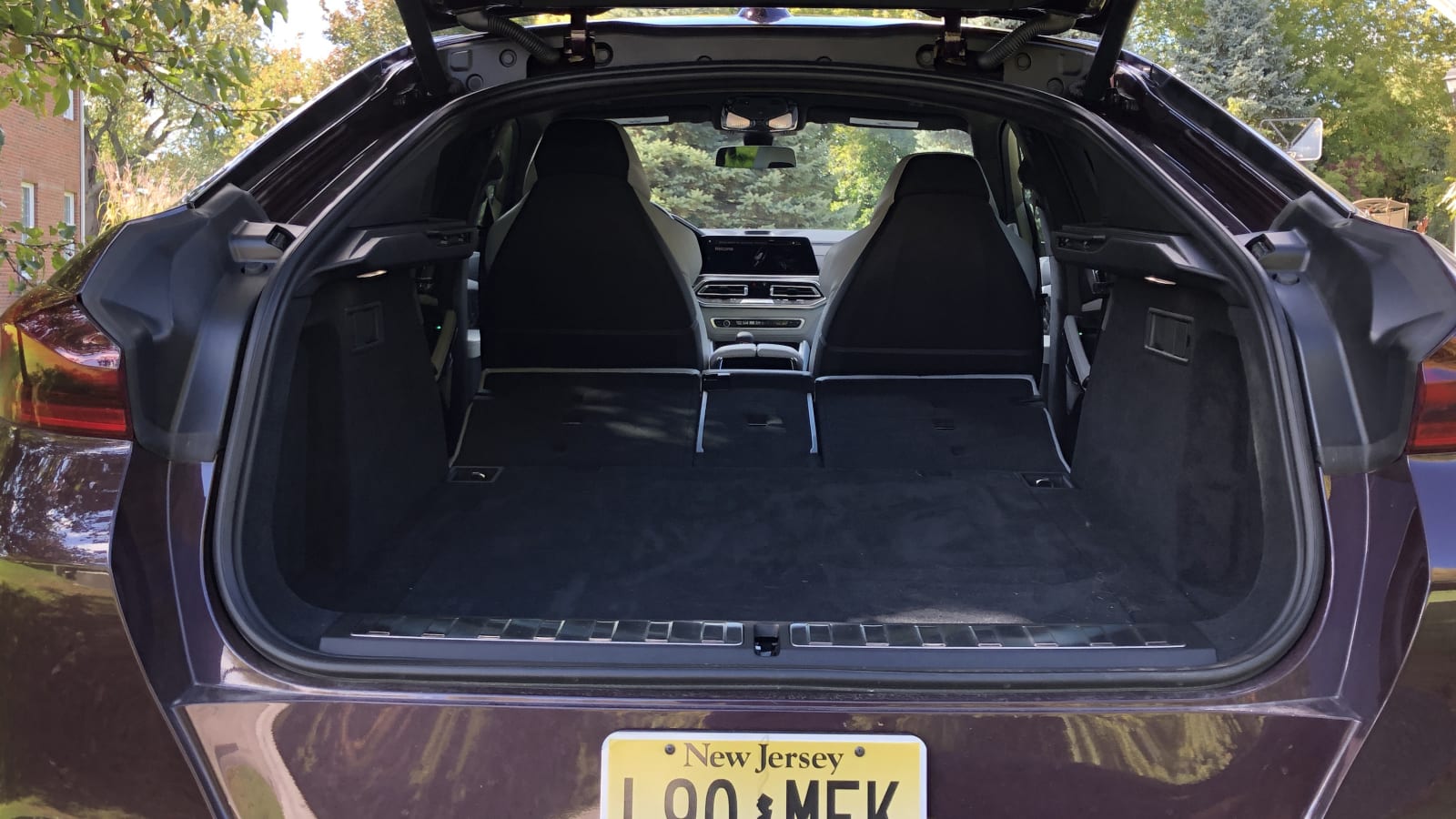 As a whole, though, the X6 comports itself well in this test. There weren’t any major fails, and the slicked-back roof line doesn’t hurt cargo capacity as much as it might look at first glance. The most annoying thing about it is the load floor height. Lifting heavy items or suitcases all the way up into this car won’t be enjoyable, and it’s especially annoying when we know how much easier the X5 makes it.