Tesla Semi — remember it from 2017? It's delayed again

Tesla allegedly charged some of its customers twice for their car

MALIBU, Calif. — About half a century ago, a power company fleet manager wandered into a Subaru dealership in northern Japan. Searching for a vehicle for servicing electrical lines across the region’s mountainous and snowy terrain, the manager eventually talked Subaru into building the world’s first four-wheel-drive wagon.

That wagon begat generations of surprisingly capable successors, and it could be argued that one of them, the lifted AWD wagon known as the 1994 Outback, kicked off the modern CUV craze. Fast forward to today and the current Subaru Outback is bigger and more crossover than ever, catering to outdoorsy families who recognize how useful its distinctive capabilities can be for their adventures. Still, there are some outdoorsy families who like traveling further out back into the hinterlands than others. They’re the folks who have already been lifting their Outbacks further and putting more aggressive rubber on them. The new 2022 Subaru Outback Wilderness is for them.

Beyond just a trim level, the Outback Wilderness is the first offering in a new Subaru sub-brand. It will be to overlanders and vanlifers what STI is to canyon-carving speed demons. Right away, it’s apparent that the Wilderness is more rugged than a standard-issue Outback but, crucially, it’s much more than an appearance package.

The Outback Wilderness increases ground clearance over the Outback by 0.8 inches, from 8.7 to 9.5. That’s seriously tall. Along with it comes more suspension travel and a slightly wider track thanks to exclusive matte black 17 x 7.0 alloys. The tough-looking 225/65-R17 Yokohama Geolandar All-Terrains that accompany them even sport raised white letters as a throwback to the original Outback.

Along with the suspension, redesigned bumpers help the Wilderness travel further off the beaten path. The approach angle improves by 1.4 degrees to an even 20, the ramp breakover angle increases by 1.8 degrees to 21.2, and the departure angle grows by 1.9 degrees to 23.6. None of these additions are enough to make it much of a rock crawler (Jeep’s Cherokee and Grand Cherokee are still better, as is the Ford Bronco Sport), but they are nevertheless significant increases over the regular Outback and further builds its off-roading advantage over more soft-roading crossovers like the Honda CR-V and basic Toyota RAV4. In addition, bumper corners are beveled to help slip by obstructions while turning.

Wilderness models build upon Onyx models, which means the turbocharged 2.4-liter boxer comes standard. The delivery of its 260 horsepower at 5,600 rpm and 277 lb-ft of torque at 2,000 rpm through a CVT smooth and lag-free, and there’s no reason not to expect the same here. Although the output remains unchanged, Wilderness drivers may notice more low-end torque, a result of an increased final drive ratio from 4.11:1 to 4.44:1. Subaru says this allows the vehicle to climb grades up to 40% on a gravel surface. As a result, fuel economy does suffer a bit, though, dropping to 22 mpg city and 26 mpg highway (versus 23 mpg city and 30 mpg highway). The all-terrain tires and higher ride height almost certainly contribute to that drop as well. 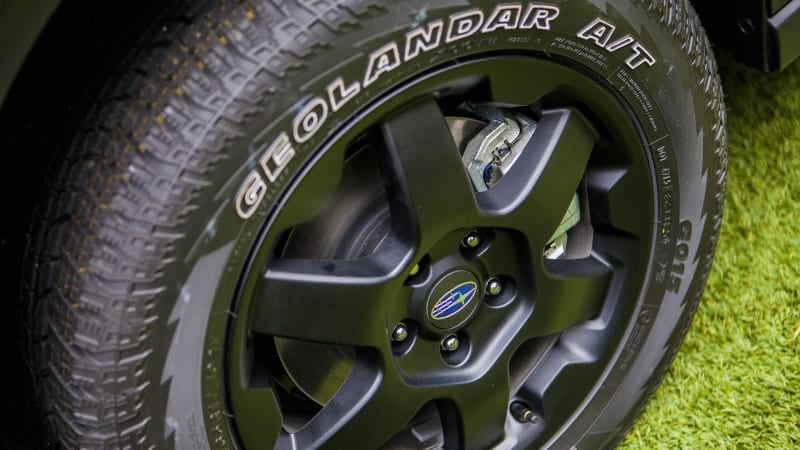 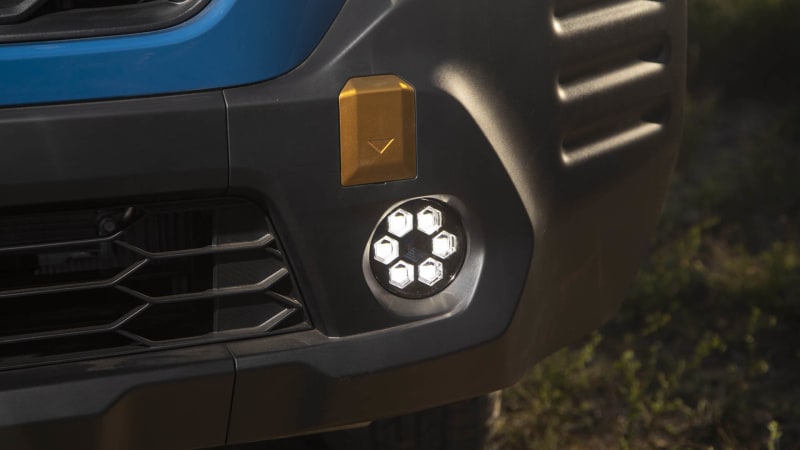 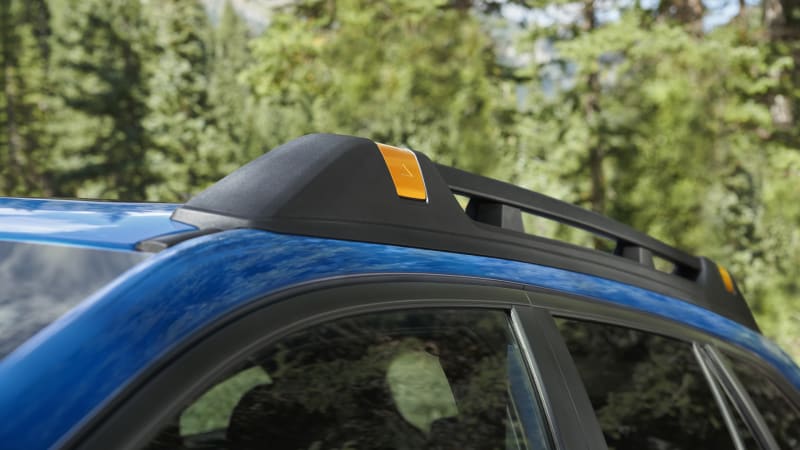 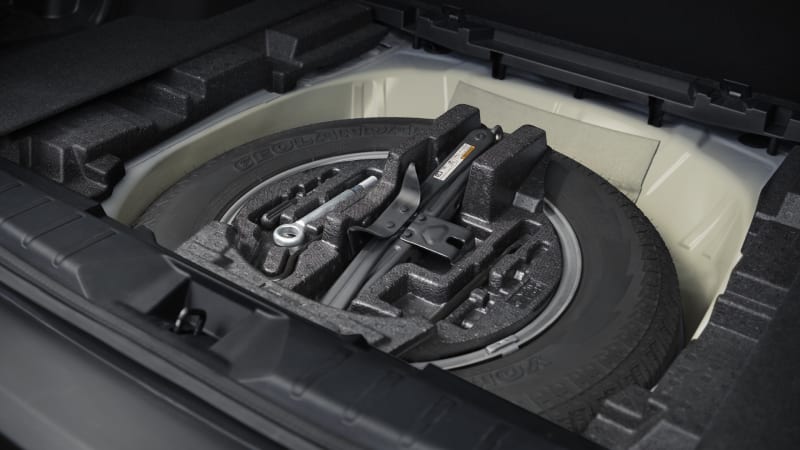 To really get owners off the grid, the roof rack system is a sturdier, fixed ladder frame architecture that replaces the “Swing-n-Place” one. Notably, it allows for a static weight of 700 pounds, which can support accessories like a roof-mounted tent. And in case you get a flat tire away from civilization, a full-size spare resides under the cargo area, not a space saver.

The Wilderness comes with an upgraded plastic and aluminum underbody cover to protect the engine. However, if you want to try your hand at rock strewn trails, Subaru will also offer optional skid plates to protect the engine, transmission, fuel tank, and differential (see gallery) made of aluminum or steel, depending on the part. Prices aren’t final, but a Subaru spokesperson told us that the entire set should come in at around $500 not including installation.

Additionally, a slightly improved X-Mode system is exclusive to the Outback Wilderness (and presumably other models’ future Wilderness variants). Typically this system — which assists in low-speed situations like climbing uneven surface grades, controlling hill descent and traversing low-traction surfaces — would disengage at around 25 mph. Wilderness models have a higher speed setting that operates beyond that cutoff, and X-Mode can switch back and forth between the two for smoother off-road driving without interruption in power delivery.

Some of the Wilderness models’ visual cues will assist in trekking through the back country as well. For example, the matte black strip on the hood prevents glare. Hexagonal LED fog lights are said to be very powerful, and match the hexagonal pattern in the exclusive grille. Copper-colored plates call out anchor points and tie-downs on the roof rack.

Wilderness models also receive an exclusive color, Geyser Blue, said to be inspired by a mixture of Subaru’s trademark World Rally Blue on sports models and green to represent nature. It will be the flagship color, available on future Wilderness spinoffs as well. Other Outback colors are available on the Wilderness, except for Abyss Blue and Crimson Red. More aggressive side cladding, blacked-out window trim and exclusive badging round out the exterior touches.

Outdoors-oriented upgrades continue in the cabin as well. Water-repellent upholstery sheathes the seats (the Wilderness logo is embossed in the headrests, naturally). The headliner is finished in a darker material, Subaru says, so contact made with bikes or other dirty equipment are less likely to result in noticeable smudges. The rear seat backs boast a waterproof material as well, and the cargo area features a waterproof tray spanning the loading floor, so feel free to toss in all the wet camping gear you want. The floor mats are also heavy-duty rubbery ones that display a Wilderness logo.

The Wilderness interior is further distinguished by the same copper-colored accents that appear outside, including around the steering wheel and shifter, as well as stitching. Brushed aluminum pedals give the footwell a sporty feel, and most of the interior pieces that would normally be chromed are instead gunmetal gray.

Here on the West Coast, we’ve noticed a distinct uptick in the number of lifted Subarus prowling the streets. Whether Outbacks, Crosstreks, or even the occasional Loyale, there’s a trend emerging. One advantage of ordering up a factory-tuned vehicle, though, is the fact that safety sensors like Subaru’s Eyesight system, which includes lane centering and adaptive cruise, has been calibrated specifically to compensate for the new height.

Pricing hasn’t been announced yet, but a premium over the Onyx’s $35,145 is expected. Subaru has always been popular with nature lovers, and its customers are a loyal bunch. With the popularity of overlanding expanding what people are willing to do with their cars, Subaru is smart and well-positioned to capture a slice of that market. After all, the company that created the off-road wagon segment should be able to bring back some buyers who would otherwise be browsing Craigslist for a used Land Cruiser or Westy Vanagons.