2022 Nissan Pathfinder vs. Pilot, Highlander, Telluride and more | How they compare on paper

The three-row crossover segment is downright bursting with options, and many of them are really good ones. Nissan’s previous-generation Pathfinder would find itself toward the bottom of our favorites list, but now that the totally new 2022 Nissan Pathfinder is out, it’s time for a fresh look at Nissan’s family-oriented crossover.

This comparison is limited in scope for the time being, because Nissan is holding back on providing a number of vital interior dimensions like legroom and headroom. However, we do have the vast majority of specs, so it’s worth taking an initial look.

Our comparison chart below includes the Pathfinder’s closest competitors from Japan and South Korea. Of course, you can also cross-shop the Pathfinder with others like the Ford Explorer, Chevrolet Traverse and Volkswagen Atlas, but for simplicity and readability’s sake (plus we researched what people actually tend to research the Pathfinder against), we’re limiting it to these six others that the Pathfinder most closely matches up with.

Take a look at the chart, then read on for our analysis. 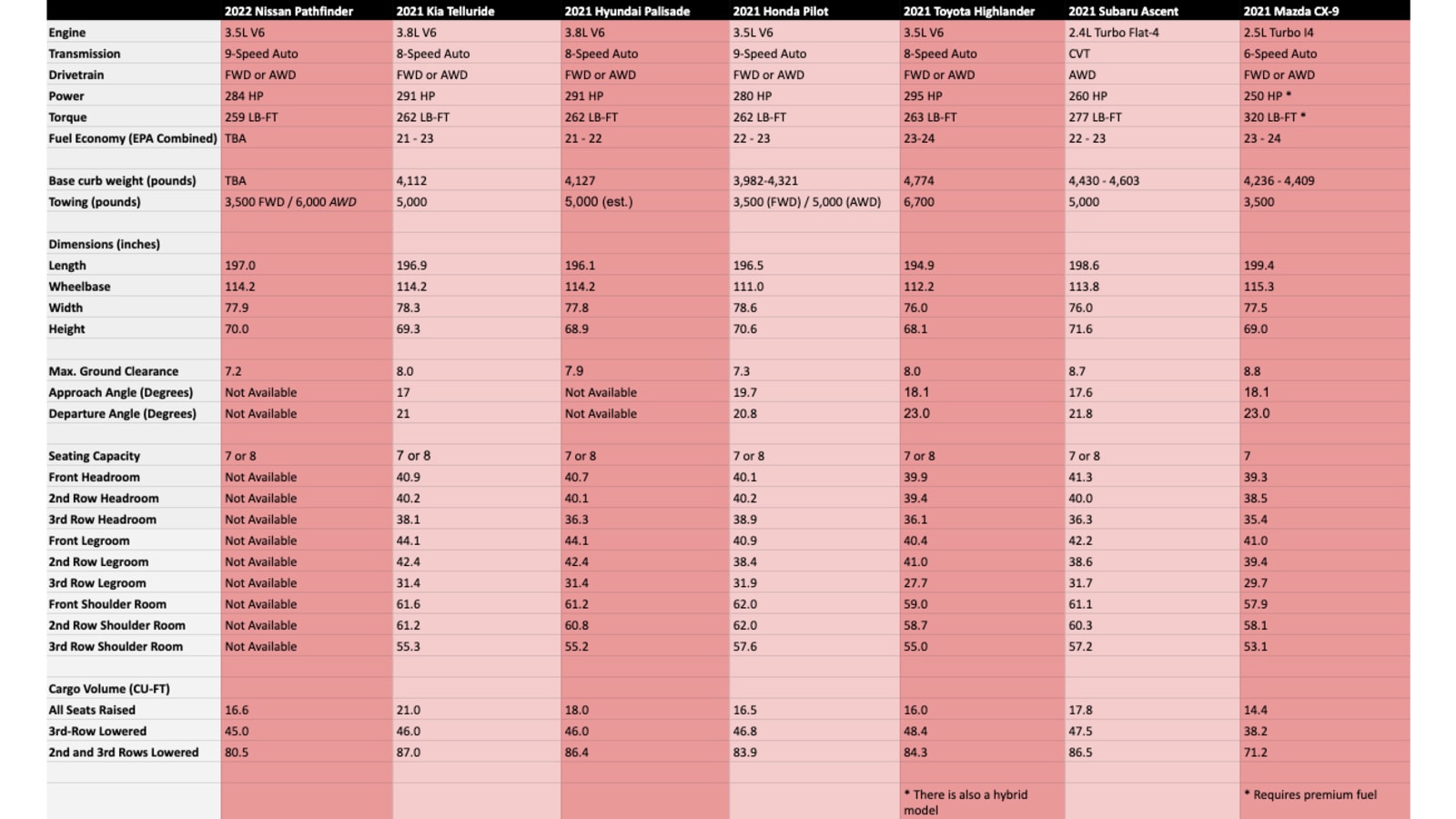 Nissan decided to stick with its trusty 3.5-liter V6 for duty in this generation of Pathfinder, the same as was in the previous generation. At 284 horsepower and 259 pound-feet of torque, it’s simply average in this segment. Most of the others hover just around or above 290 horsepower, so the difference is negligible. However, the turbocharged Mazda CX-9 does stick out as the torque monster of the bunch, producing 320 pound-feet of torque, which is about 60 pound-feet more than most of the crossovers in this comparo.

The change we’re happiest to see in the Pathfinder is its ditching of the CVT for a traditional nine-speed automatic. Most of the others in this class use an eight- or nine-speed auto, and tend to be far more enjoyable to drive because of it. This should improve the behind-the-wheel experience of the Pathfinder similarly. With the extreme homogeneity between products, fuel economy differences are negligible. We suspect the Pathfinder (EPA ratings are currently unavailable) will achieve similar results as the 22-23 mpg combined it did before, putting it right on par with others.

Towing is one area where the Pathfinder takes a big win. Its 6,000-pound maximum capacity is way higher than the others in this spec comparo. However, we’ll note that a Ford Explorer tops out at 5,600 pounds, and the new Jeep Grand Cherokee L can handle as much as 7,200 pounds with its 5.7-liter V8. Fuel economy suffers accordingly. 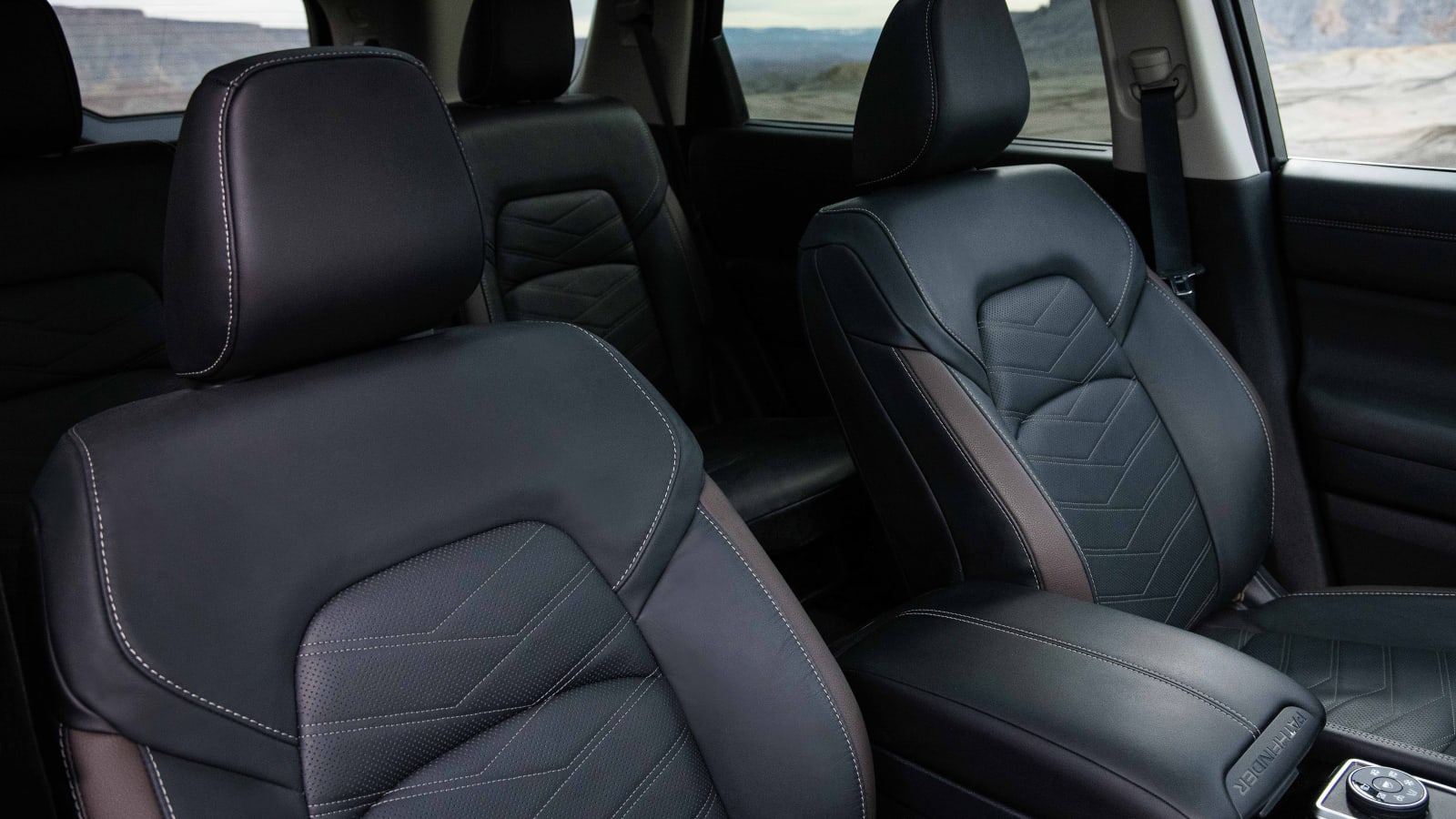 Nissan still hasn’t provided most of the important interior specs that we need for a full comparison, but we can take some educated guesses. The Pathfinder is still working with an updated version of its previous platform, and it’s keeping the same 114.2-inch wheelbase as before. A repackaging job could certainly find more space, but Nissan is still dealing with similar dimensions. Second-row legroom was 41.7 inches, and third-row legroom was 30.7 inches previously. Assuming this doesn’t change much in the new Pathfinder, that makes it smaller than the Telluride/Palisade twins and average versus the rest of the field. Some minor improvements could see it become above average in space, but we’ll need to wait for final numbers to come to any grand conclusions.

The Pathfinder’s biggest weakness versus the field is in cargo volume. It’s below average across the board in all seating configurations. Only the Mazda CX-9 is significantly worse than the Nissan in this case. 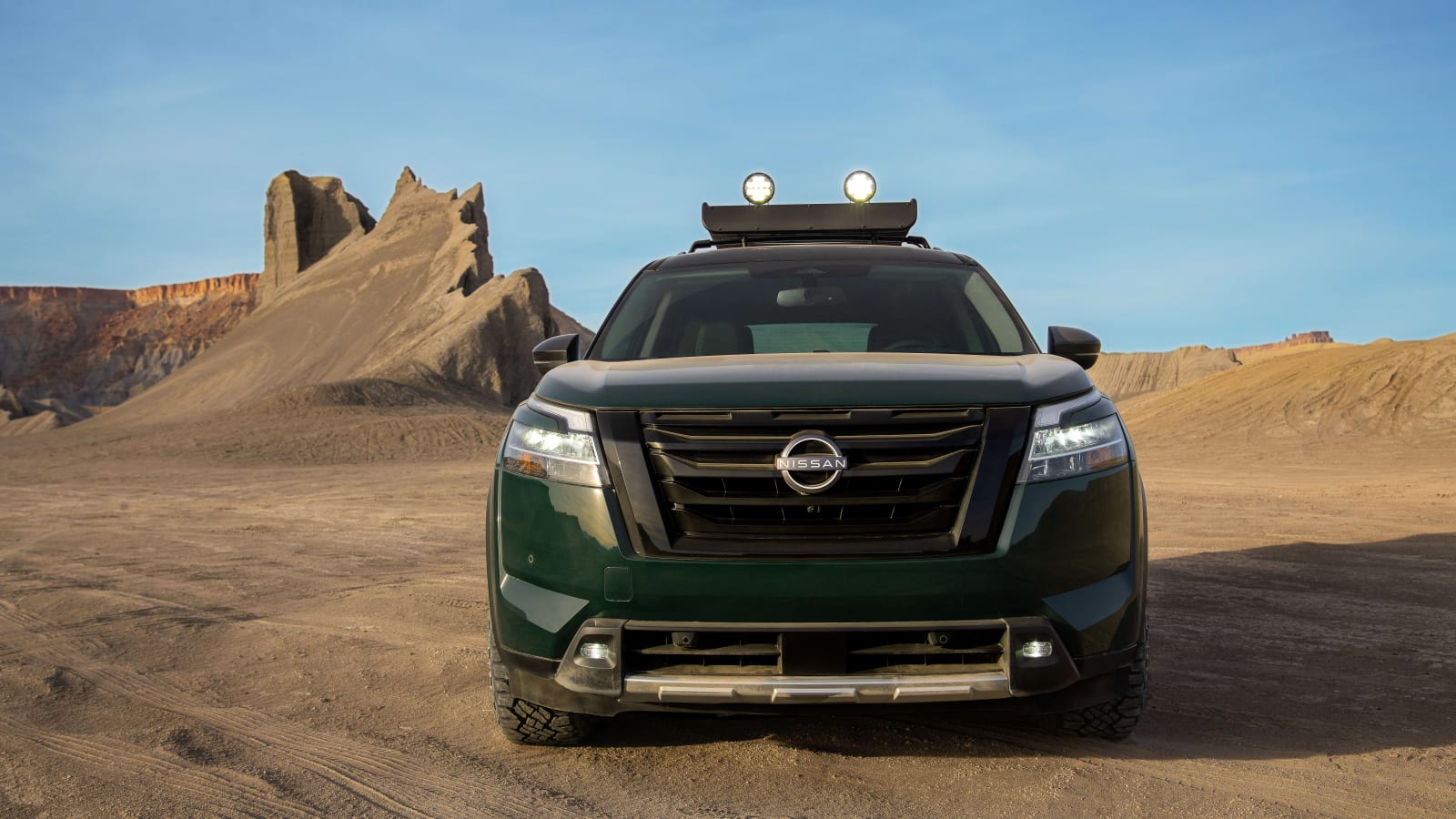 Pathfinder was synonymous with rugged, off-road performance at one point in its life. Those days are long gone, though, because the Pathfinder is a road-focused unibody crossover now. The appearance of a semi-butch SUV is coming back for this generation, but it’s mostly for looks. Ground clearance is up by just under two tenths of an inch to 7.2 inches. That means it has less ground clearance than all the competitors in this spec comparo. Most others in this class offer about 8 inches or more.

Nissan did implement a new all-wheel-drive system (a direct coupling design) for this year that should be slightly better off-road, as it no longer requires front-wheel slip to send power rearward. There’s also a terrain-mode selector that adjusts the traction control and stability control settings for the environment. Regardless, we don’t expect the Pathfinder will be any better-suited to light off-roading than much of the competition.

How their interiors compare

Nissan is showing us interior photos of the most-expensive Platinum trim for now, and it’s a huge upgrade over the outgoing crossover. That said, the competition is brutally tough. Both the Telluride and Palisade are verging on luxury in their highest specs. The Mazda CX-9 is very premium inside, and even the Highlander in its top trim is looking ritzy. Nissan’s Pathfinder does look nicer than the fully-decked out Pilot, but it’s no massive victory. Nissan is definitely keeping pace and staying relatively competitive, but the wide array of other supremely nice interiors available are tough to win over.

How they compare in photos

And lastly, here’s what all of the vehicles in this comparo look like in detail.