Say hello to the new 2022 Nissan Pathfinder. It’s the latest evolution of Nissan’s three-row crossover, and it comes with a host of new reasons to like it.

The first is design. Nissan did away with the soft, car-like styling of the outgoing Pathfinder and reinvented it with this blocky, rough-and-tumble look. The front end’s resemblance to the recently-launched Nissan Armada is immediately apparent with the wide, black grille and U-shaped outline. It’s V-Motion on steroids. The whole front end looks tall and imposing with its largely flat hood falling into the flatter face. It’s subtle, but you can make out a small homage to the first-generation Pathfinder with its three-slot hood. We’re suspect of the headlight design — the headlights themselves look normal, but the LED running lights remind us of furrowing eyebrows. It’s a bit weird in photos, but we’ll withhold final judgment until seeing the car in person.

All the rougher edges are tempered by a number of premium touches. There’s chrome spattered throughout, and glossy black trim bits aplenty.. The slick, horizontal LED taillights look great, and the large Pathfinder text across the tailgate is a nice touch. Moving the license plate location into the bottom of the bumper facilitated this new rear design, and it looks much more cohesive and better than before. Nissan’s upright stance and shape carries backward to great effect here, too. It looks tough without suggesting anything more than basic light off-roading capabilities, which is just about right for the unibody Pathfinder. 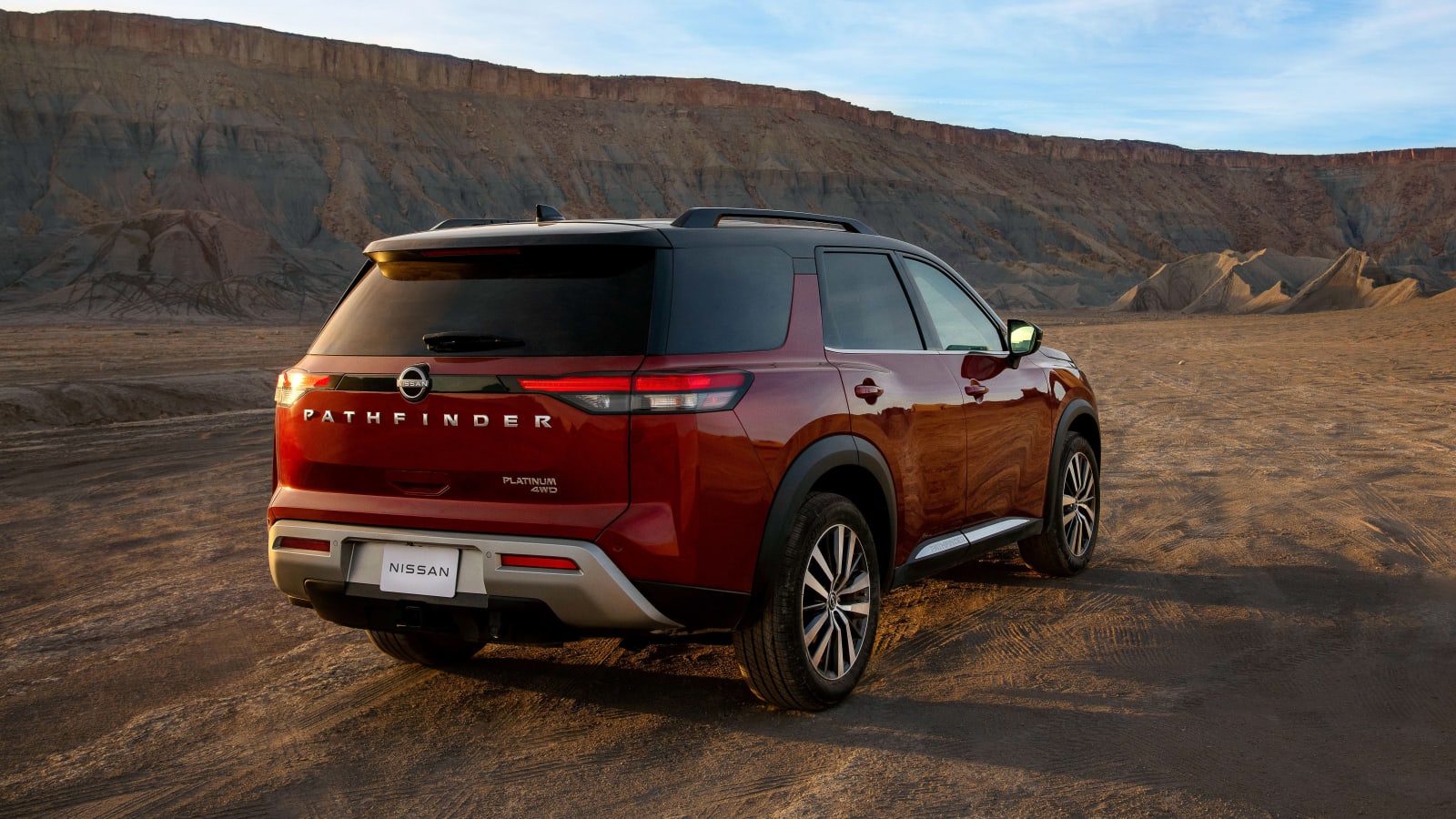 And yes, it’s still unibody. The outgoing Pathfinder’s platform was revised and modified for duty in this 2022 model. Nissan’s 3.5-liter V6 carries over unchanged with 284 horsepower and 259 pound-feet of torque, but there’s one big powertrain change we’ll all be thankful for: no more CVT. Instead, the Pathfinder will shift via a new nine-speed automatic transmission supplied by ZF. We’ve had misgivings with the ZF nine-speed auto in other vehicles before, so let’s hope the one in the Pathfinder is satisfactory. Front-wheel drive is still standard, but a new all-wheel drive system is available. It’s a new direct coupling design, so it doesn’t need to sense front wheel slip to begin sending torque rearward. Of which, 50% of torque can go to the rear wheels, and Nissan says its off-road performance is better with the new design. Ground clearance is only up by about two tenths of an inch (now 7.2 inches), though, so don’t get any rock crawling ideas in your head.

Towing is still mighty impressive for the class at a maximum of 6,000 pounds. Nissan is also introducing a new Trailer Sway Control feature that comes standard. The last big, mechanical change is a new electric power steering system that’s tuned to be quicker and make the car feel like it’s more agile. 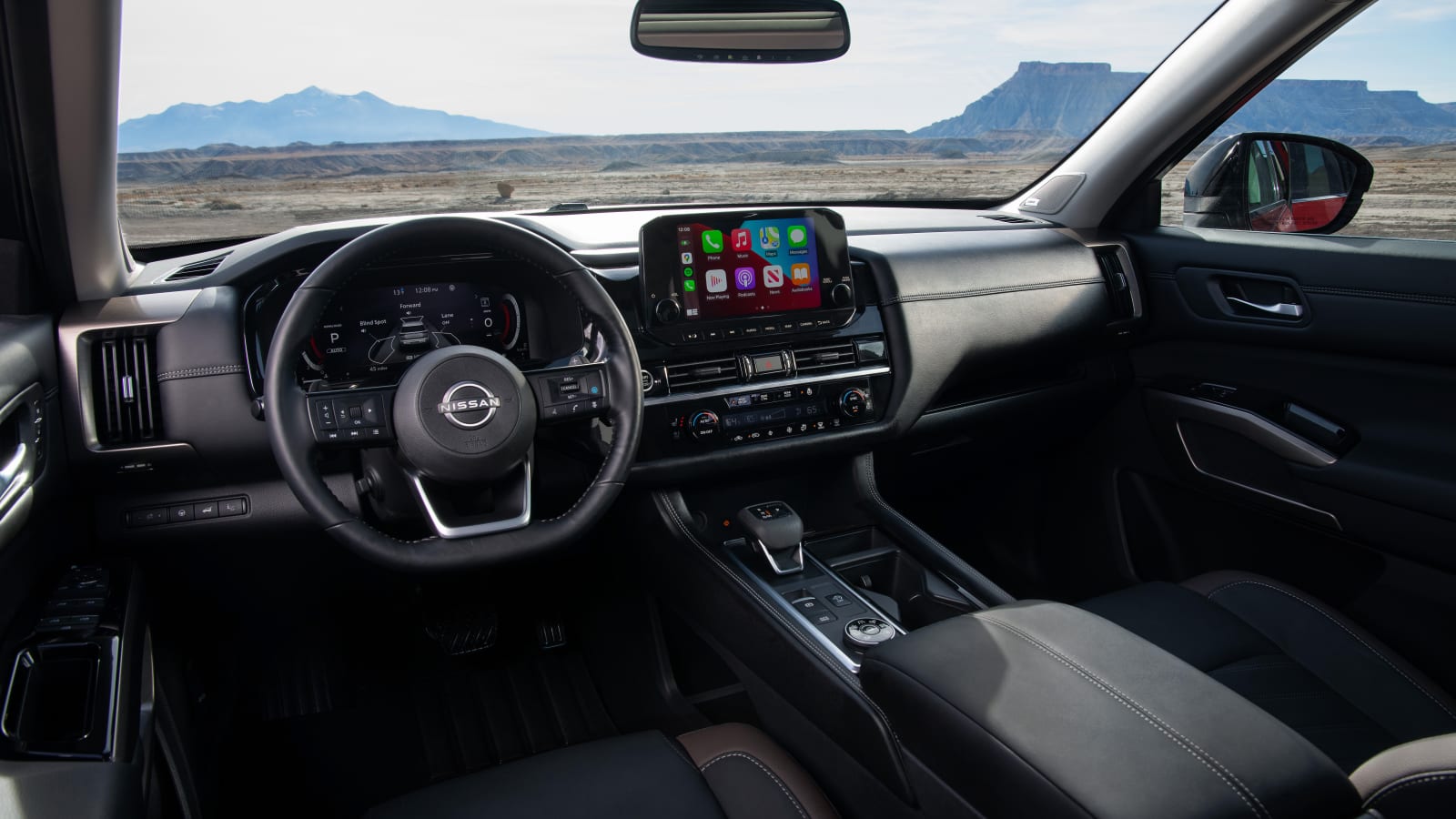 Just like the Rogue took huge leaps forward with its interior, the Pathfinder similarly impresses us. It looks nothing like the outgoing Pathfinder inside, which is a good thing. Nissan’s latest interior design language is applied, so all the nicer and more premium-looking parts and controls we’re starting to grow accustomed to are seen here. Seven interior “environments” will be offered with different combinations of trim and seat finishes. Ambient lighting is also on deck to make it feel even more upscale.

The same, weird shifter from the Rogue finds duty here — Nissan says it allows for the “bridge” center console design that opens up storage space underneath the console. An eight-inch touchscreen that runs Apple CarPlay and Android Auto is standard. A nine-inch unit that’s capable of wireless CarPlay (but only wired Android Auto) is available. The top trim Pathfinder finds itself with a fully digital 12.3-inch instrument cluster, while all other trims have analog gauges supplemented by a seven-inch central screen. A 10.8-inch head-up display is also available.

All this tech brings the Pathfinder thoroughly up to date with the competition, but there are some utility updates to note, as well. An eight-passenger configuration is standard, but Nissan is offering captain’s chars in the second row as an option for the first time. There will be a “no-tools-required” center console between the seats, and they even retain Nissan’s one touch EZ Flex release tech that moves the seats out of the way quickly and conveniently for third-row access. Cargo space is a zero-sum game. It’s marginally up with the third row in use, but slightly down with the third row stored versus the outgoing Pathfinder. That puts it toward the back-to-mid pack compared to other three-row crossovers out there. 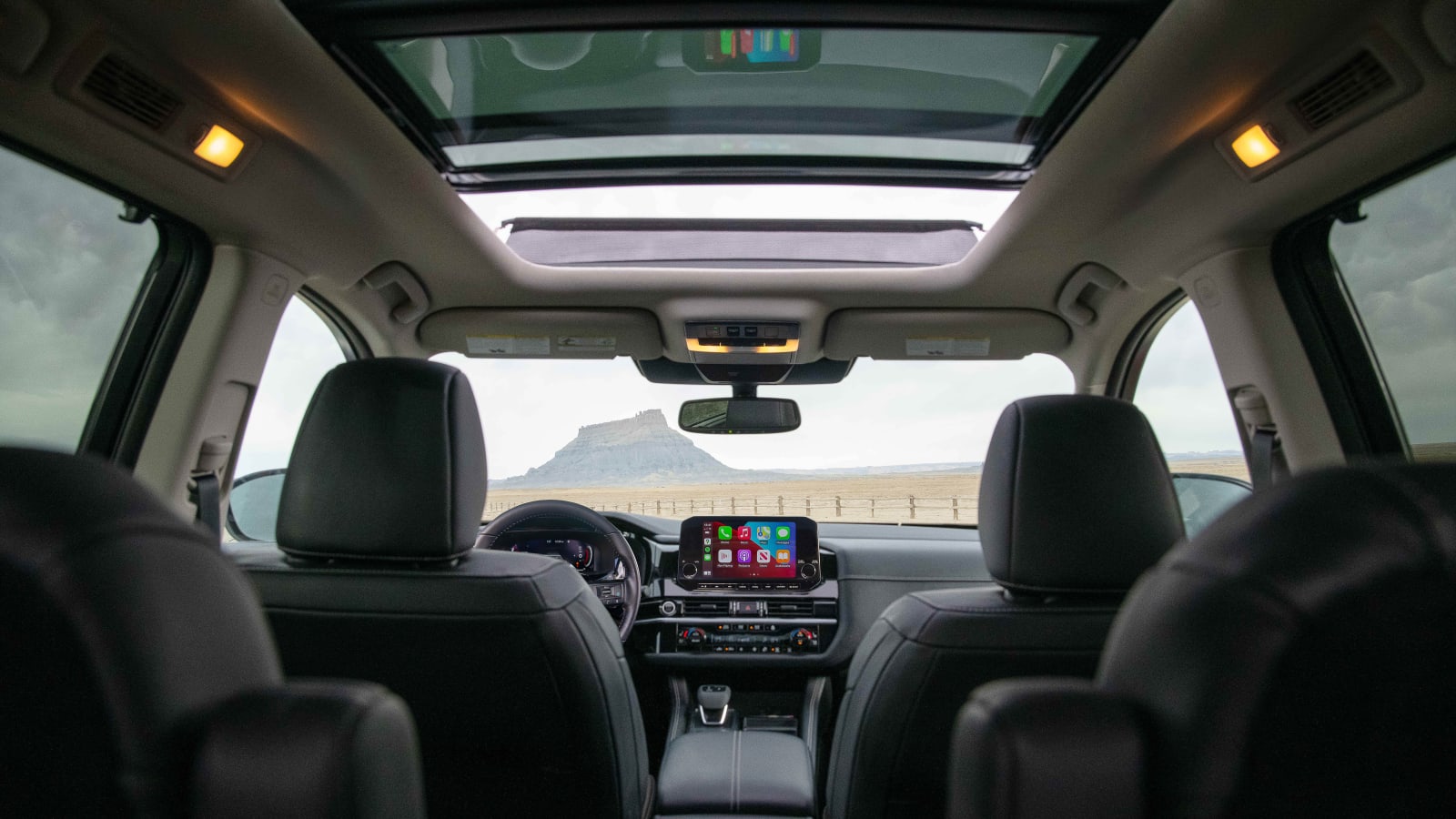 As for driver assistance features, you can have the best that Nissan offers with the 2022 Pathfinder. Pro-Pilot Assist with its smart adaptive cruise and excellent lane-centering is available. The latest Pro-Pilot Assist with Navi-Link comes on the top trim and adds navigation map data to its brain, so it can automatically speed up and slow down for freeway interchanges/exits. Even base Pathfinder’s will come with a large suite of driver assistance systems.

Pricing isn’t available at this time, but Nissan says the 2022 Pathfinder will go on sale in summer this year.