2022 Nissan Frontier vs. Midsize Pickups | How they compare on paper 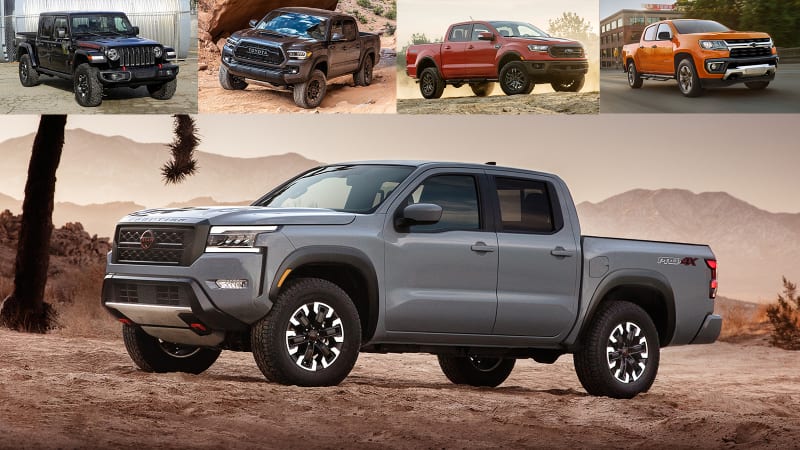 The 2022 Nissan Frontier is arriving into a midsize pickup truck market that’s hotter than it has been in years, arguably decades. And it’s taking an interesting approach with just one engine option and a platform derived from its ancient predecessor. We won’t know exactly how it fares until we get a chance to drive it for ourselves, but Nissan did provide us with quite a few juicy technical specs, and you know what that means: it’s time to compare the numbers with the competition.

We’ve rounded up basically all the small pickup players here. We’ve got the Frontier’s homegrown rival, the Toyota Tacoma, as well as the current crop from America, the Ford Ranger, Chevy Colorado and Jeep Gladiator. We’ve got all the raw numbers in the spreadsheet below. Following that you’ll find highlights and analysis of each category including powertrains, size and capability, and pricing.

The Nissan has abandoned the four-cylinder engine altogether for this generation, opting for a standard 3.8-liter V6, the largest displacement engine of the group. The only other automaker to offer a single engine is Ford with the Ranger’s turbocharged four-cylinder. Both of these trucks lay claim to bests in class for engines. The Frontier makes the most horsepower, and the Ranger has the most torque for a gas engine. The Ranger also gets to claim the best combined fuel economy for a gas engine. The Chevy Colorado deserves some mention, though, as its V6 makes nearly as much power and torque as the Nissan.

If, for whatever reason, you prefer a naturally aspirated four-cylinder, only Toyota and Chevy still offer one. The Chevy’s offers the most power and torque, and it’s also more efficient than the Toyota engine. The Chevy can also be paired with four-wheel drive, whereas the four-cylinder Tacoma is only available with two-wheel drive.

The Colorado and Gladiator are unique in offering diesel engines, and the Jeep has the more impressive one. A turbocharged V6, it makes substantially more power and torque all while delivering superior combined fuel economy. It even pulls this off while being paired with four-wheel drive only. The Colorado does squeak out a couple extra mpg on the highway with two-wheel-drive compared to the Gladiator, though.

If you’re a devotee of the manual transmission, your only remaining manual options reside with Toyota and Jeep. They each offer six-speed manuals with their gas V6s. Both trucks only offer it with four-wheel drive, but you can have it with either the extended cab or crew cab on the Tacoma.

Of course some of the most talked about specs on any truck are the ones about towing and hauling, which makes sense since that’s why trucks exist. The towing champion is the Jeep Gladiator, but just barely. The Colorado is only 50 pounds behind it, and the Ranger is only 100 pounds behind the Colorado. The Ranger does have a bonus in that every version has the same 7,500-pound tow rating. On all of the other trucks, the maximum tow rating doesn’t apply to all models. When buying a truck, make sure you check your specific example’s rating. It can vary depending on engine, drivetrain and body configuration. At the bottom of the towing list is the new Frontier, closely followed by the Tacoma, which can tow only 80 more pounds than the Frontier.

The Ranger walks away as the payload master, and it manages to top the next-highest Gladiator by 160 pounds. The Colorado actually has the lowest payload, but it’s not far behind the Frontier or Tacoma. Again, like with towing capacities, payload varies based on engine, drivetrain, trim and cab configuration. So check the numbers for your specific model before planning on a big hauling project.

The term “midsize” has been increasingly used to described this segment of pickups that was once described as “compact.” Certainly on the outside, the Nissan Frontier is closer to the “compact” end of the spectrum, very closely followed by the Ford Ranger. The Tacoma and Colorado are close to each other, and are a couple inches longer than the Frontier and Ranger. The biggest is certainly the Gladiator. Technically, the Frontier, Tacoma and Colorado have longer variants than the Gladiator, but those are the relatively uncommon crew cab and long bed combinations.

The size of the Chevy and Jeep do pay off inside. They have the most spacious cabs, and if you care about your rear passengers, you’ll want to go with the Jeep. The Toyota offers the most cramped accommodations for both extended and crew cab configurations. Nissan hasn’t released interior dimensions yet, but considering the truck’s wheelbase has remained the same and the width has increased by 0.5 inches, we don’t anticipate major gains. For at least some reference, the outgoing Frontier’s rear legroom is listed at 33.6 inches for the crew cab. That’s less than all but the Tacoma. Again, though, we don’t know the official dimensions for the ’21 truck.

Nissan hasn’t provided pricing for the Frontier, so it’s a mystery where it will land. For now, the Ford Ranger has the lowest base price, which is quite impressive considering it comes with an engine that’s comparable with other company’s optional engines. Right behind it is the Chevy, followed by the Toyota and then the Jeep.

The Jeep has a particularly high price tag, but some of that is due to the somewhat restricted options. All Gladiators come standard with four-wheel drive, the V6 engine and the crew cab arrangement. The other trucks’ base prices are for two-wheel-drive, extended cab configurations.