The new and revamped 2022 Nissan Frontier is here and ready to rock the boat in the midsize pickup segment. It brings eye-catching styling, a new V6 engine (that actually debuted in the old truck) and all the updated tech amenities you’d expect to find in a brand new truck today.

Let’s start with design, because this truck sure is a looker. There’s no light evolution going on here. This is a full-on revolution, and Nissan killed it. The PRO-4X off-road model you’re looking at here has some resemblance to a Tacoma TRD product, but it’s still safely Nissan’s truck. Designers say they were inspired by the “rough and rugged” Hardbody of the 1980s and 1990s. It’s no retro copycat, but the idea is there in its high shouldered fenders, tall face and flat hood. Any indication of friendliness is gone, and that was the intention.

The grille is wide, but it’s a reasonable height and size. Nissan’s double LED DRL and headlight design looks superb. However, it’s the absence of any lower bumper that exposes the big all-terrain tires and massive skid plate that really completes the look. Combine this with the red tow hooks, and the PRO-4X looks about as mean as a Chevy Colorado ZR2 does — do note that the ZR2 will be much more capable off-road. 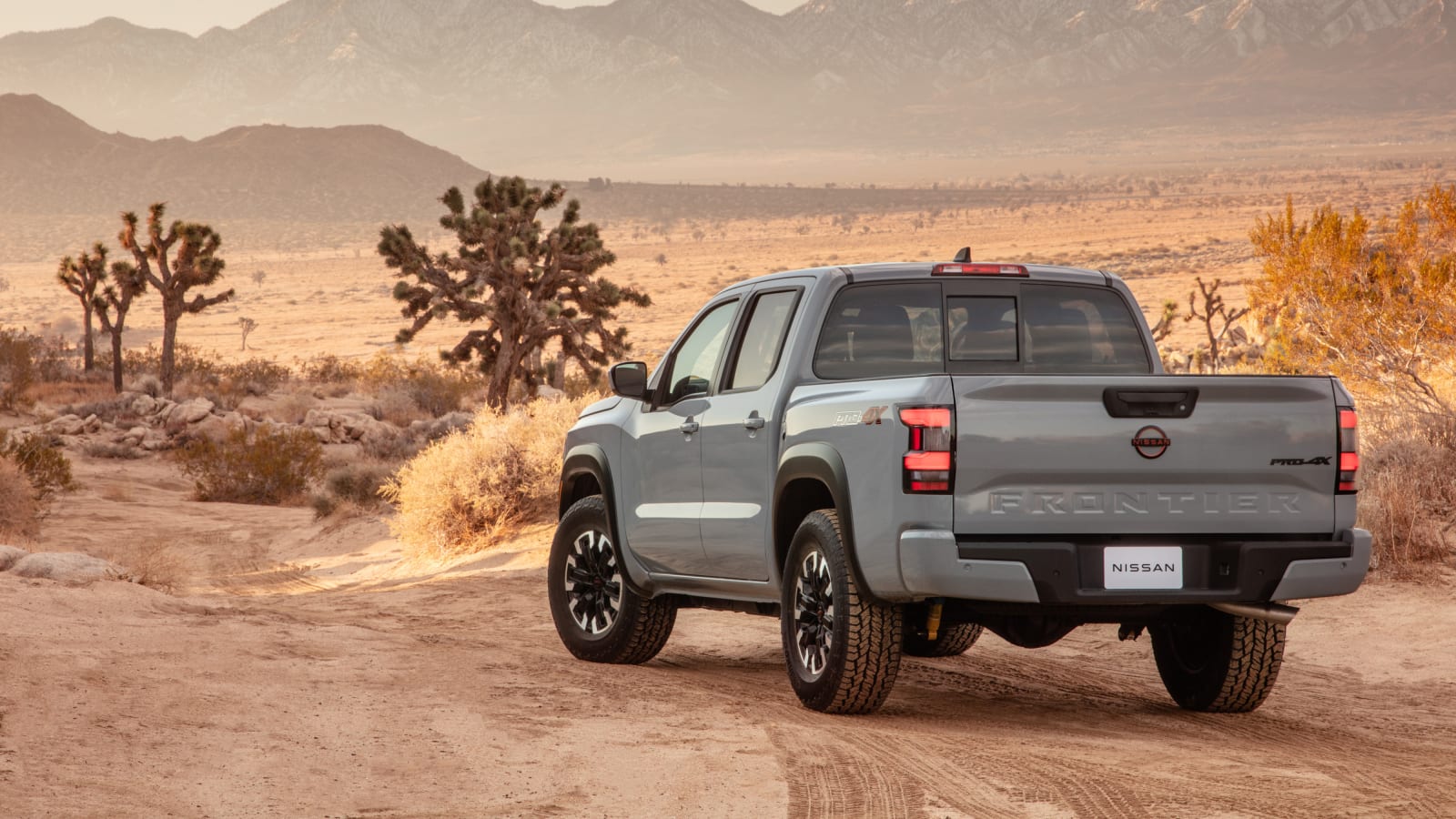 As is the case with many pickups these days, the model name gets stamped into the rear tailgate in huge letters. When it comes to overall dimensions, though, this midsize truck isn’t as huge as others. The standard wheelbase of 126 inches hasn’t changed from one generation to the next. However, the overall length of the standard truck did balloon by five inches this year — Nissan says practically all of that is in the nose of the truck, which helps give it that imposing stance. That makes it nearly as long (or as long) as most of the other midsize trucks. We’ll also note that Nissan is still offering a long wheelbase version that stretches the gap by 13.8 inches. Cab configurations include the base King Cab and the roomier Crew Cab. An updated hydraulic steering system that offers a quicker rack than before was implemented to keep it feeling small and agile.

We’ve known what would be under the hood for a long while now. Nissan previously announced that the 3.8-liter V6 it introduced as a last-second update for the 2020 Frontier was destined for the next-gen truck, and it made good on that promise. The engine makes 310 horsepower and 281 pound-feet of torque. In case you were curious about the possibility of a base four-cylinder, Nissan quashed talk of that with minimal demand being the reasoning. A nine-speed automatic transmission is the only one available — it’s the same transmission as the Titan uses. Rear-wheel drive is standard, and four-wheel drive is optional. A new trailer sway control system is standard, and in its max towing configuration (rear-wheel drive S or SV trims) it can tow up to 6,720 pounds. That’s less than the Ford Ranger, Jeep Gladiator and Chevy/GMC twins can manage at their best — it nearly matches the Tacoma’s best, but is definitely on the way-low side of its class.

Supporting all that weight and new engine is an updated version of the outgoing Frontier’s frame. This truck chassis has been in use since the Frontier was totally new for the 2005 model year, meaning it’s about to go into its 18th year of duty. Nissan says it has continually updated the platform from the start, and updated it again for this generation. A larger front stabilizer bar, addition of a rear stabilizer bar and new jounce dampers for 2022 should all aid ride and handling. For more details on what’s new and Nissan’s rationale for sticking with it, check out this explainer post.

As the photos depict, there will be a PRO-4X model available. The package nets you an electronic locking differential, Bilstein off-road-tuned shock absorbers, a number of underbody skid plates, front tow hooks, all-terrain tires and a comprehensive appearance package both inside and out that includes graphics and red accents aplenty. Nissan is also adding a two-wheel-drive off-road package that’s new this year called PRO-X. This package includes most of the PRO-4X equipment, but it does drop the locking differential and skid plates. 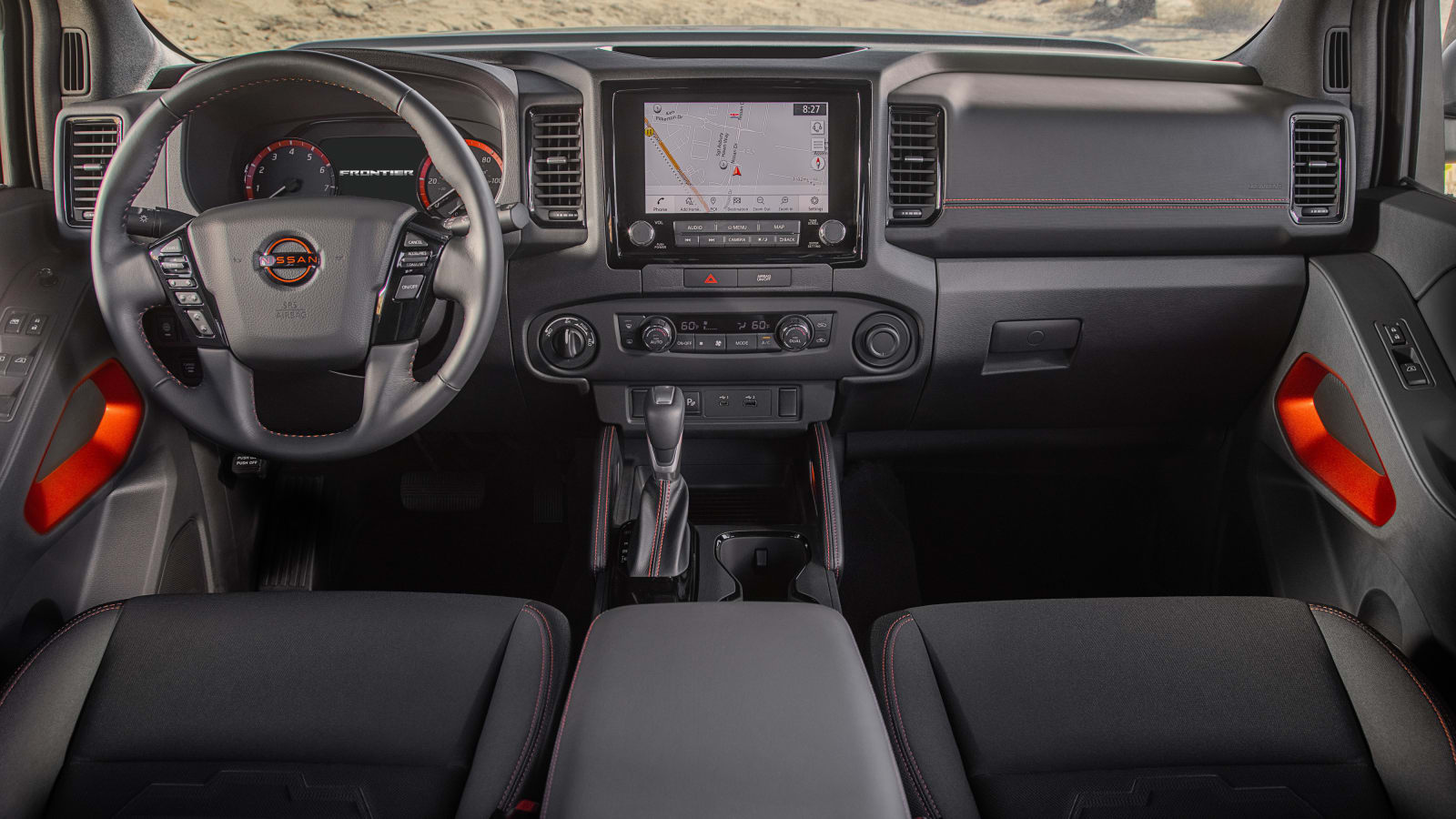 The interior is where Nissan’s last-gen Frontier suffered the most at the end of its life. Consider the problems handled with the new Frontier. It’s a wholesale redesign, and the Frontier is finally competitive with all the other midsizers in tech and style. An eight-inch infotainment system running Nissan’s latest software is standard, and so is Apple CarPlay and Android Auto. You can upgrade to a nine-inch screen optionally. A seven-inch screen sits in between the analog gauges on all trims, and there’s a WiFi hotspot option available on PRO-4X models. USB A and C(!) ports are available to plug in to, plus there’s an available wireless phone charger. Two 110-volt outlets and two 12-volt outlets round out the array of power sources. Of note for those seeking comfort: Nissan is using its Zero Gravity seats as the standard buckets. There’s much more insulation than before, and Nissan also used laminated glass for the front doors.

The Frontier has finally entered the modern era, and it appears much better for it. Predictably, it’s gaining a suite of standard driver assistance features including automatic emergency braking (front and rear), blind-spot warning, rear cross traffic alert, lane departure warning and auto high beams. Adaptive cruise control is optional, but ProPilot Assist won’t be, because Nissan hasn’t switched from hydraulic to electric power steering yet. Nissan also found a way to repurpose its 360-degree camera for an Off-Road Mode function, giving you a live feed of the obstacles in your immediate surroundings. It works when you have the four-wheel drive system in 4LO and are moving at speeds under 6 mph. Off-road specs like ground clearance, approach/departure angles aren’t available yet.

There will be four total trims available for 2022: S, SV, PRO-X and PRO-4X. We still haven’t seen photos of a non-PRO-4X, but we’re told it has a new body-color grille. The absence of a luxury-oriented SL model is also notable, meaning you’ll need to get the PRO-X or PRO-4X if you want all the goodies. Nissan says the 2022 Frontier will go on sale in summer this year, and pricing will be available closer to the on-sale date.