The 2022 Nissan Altima isn’t the first midsize sedan we’d recommend, but even so, the Altima is a really solid option that offers a couple marquee features to set it apart from the pack. For example, the Altima can be had with Nissan’s high-tech variable-compression ratio turbo engine or all-wheel drive. Yes, the Toyota Camry and Subaru Legacy both offer all-wheel drive, too, but a third all-wheel-drive sedan option is nothing to complain about. The Altima’s exterior design counts for something, as it’s aiming for a sportier look than others. We like it a lot, and even three years on from this generation’s debut, it’s still a handsome four-door.

There’s even a legitimately sporty option — the SR — for someone who wants an Altima with a sharper edge. This ups the handling chops of the Altima to bring it closer in line with the industry-leading Honda Accord. Still, its continuously variable transmission is a crutch that the Altima can’t quite get over, especially when you compare it to cars with traditionally geared transmissions that result in them being far more engaging to drive (they’re more normal, too). All that said, the Altima delivers the same basic elements as its competitors, including an abundance of space both in the rear seat and trunk, a smooth ride, and vital entertainment and safety tech. It therefore checks a lot of boxes and remains a respectable option in an otherwise dwindling sedan segment.

The one notable new item is the addition of a Midnight Edition package for the SR 2.5 trim, which you’ll see pictured in gray above. This adds dark trim and moldings, a gloss black painted grille and spoiler, LED fog lights, black painted mirrors with LED turn signal indicators, and a Satin black Midnight Edition badge outside, plus gloss black 19-inch aluminum-alloy wheels. 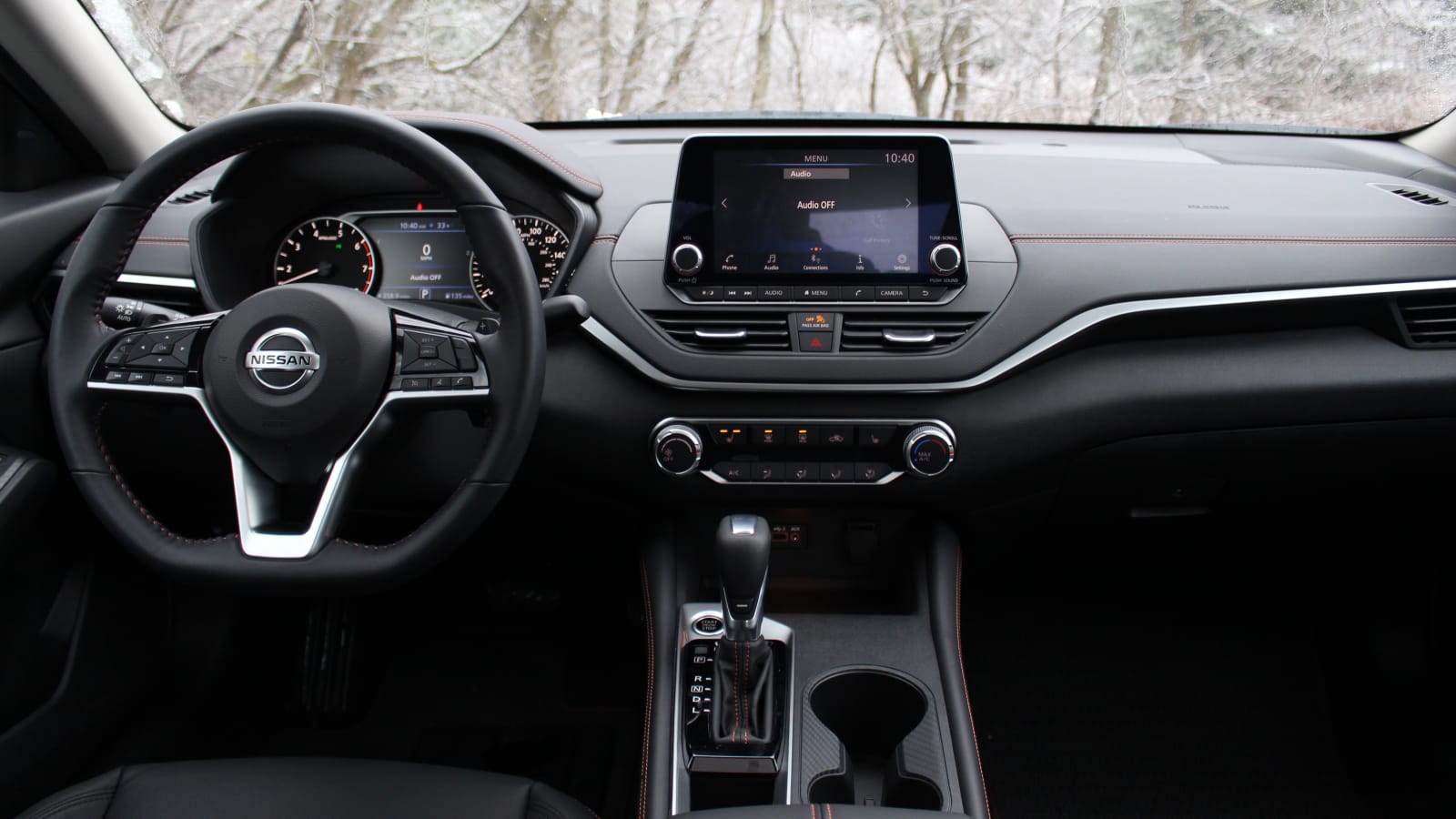 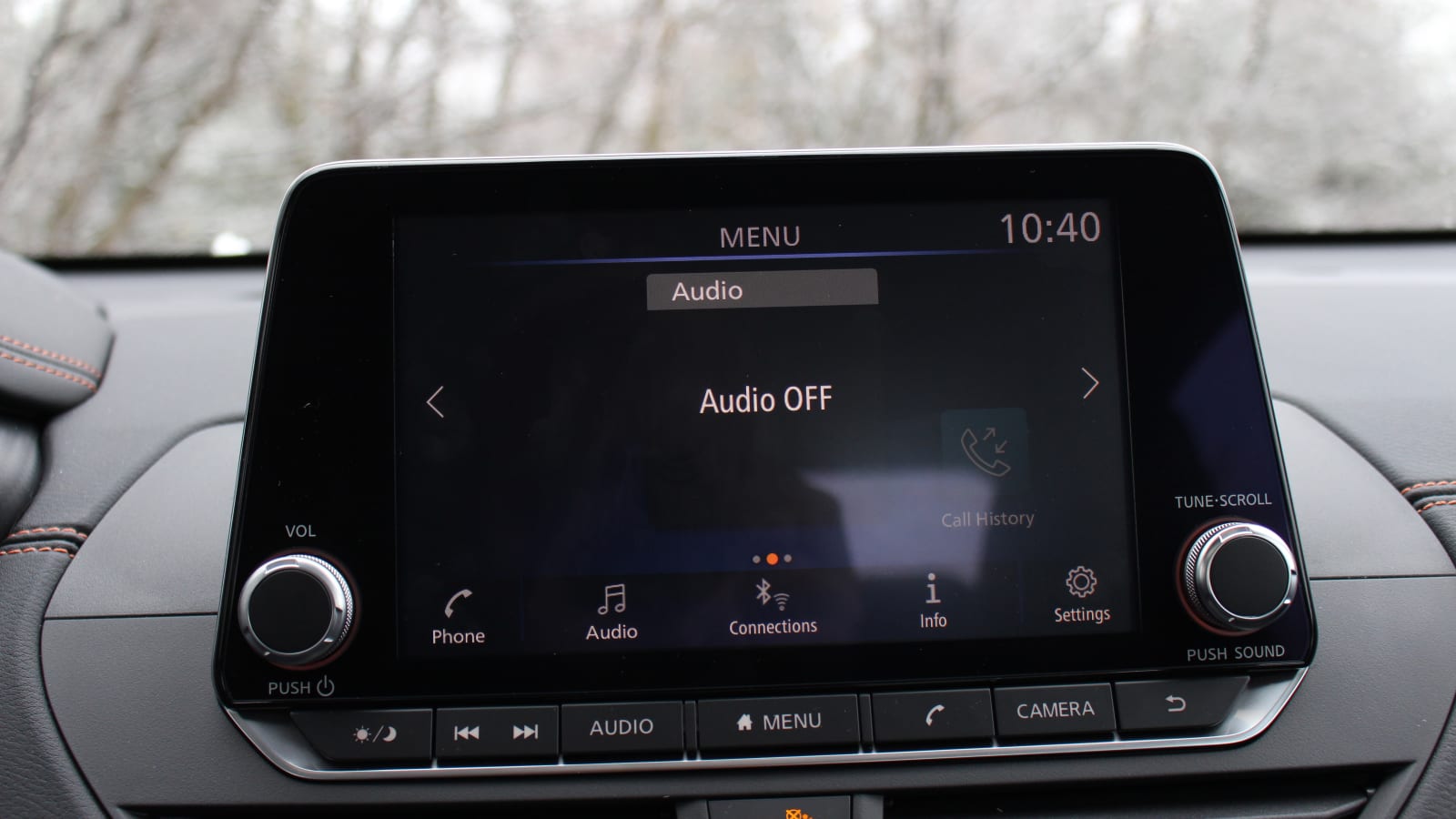 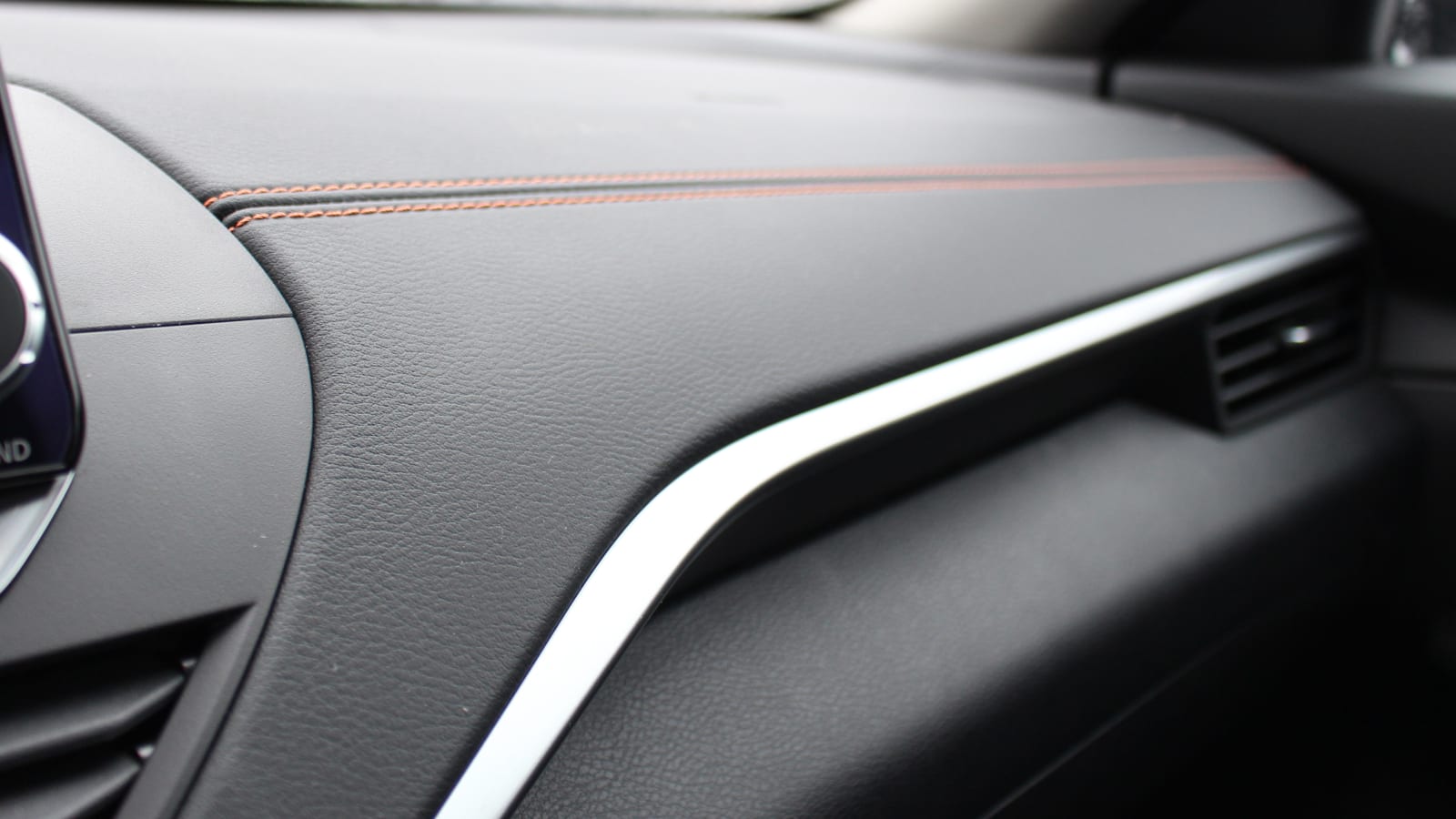 What are the Altima’s interior and in-car technology like?

The interior is appealing to a degree, especially in the premium Platinum trim, with interesting and quality materials. The flat-bottom leather-wrapped steering wheel looks good and feels better in your hands, while the leather seats feature contrast stitching that is replicated on the dash and door panels. The instrument binnacle is covered in a soft-touch material, as are the tops of the doors, while other interior surfaces are hard plastic that looks soft. The only detail that stands out in a bad way is some unconvincing wood-look plastic in upper trims. And as handsome as the interior is, we have found those of the Honda Accord, Hyundai Sonata and Toyota Camry to be stronger overall.

In terms of its in-car technology, USB-A, USB-C, aux and 12V ports are easily accessible in the center console’s phone cubby, beneath an infotainment screen mounted atop the dash. Apple CarPlay and Android Auto (neither wireless) are also standard. The car has a fairly simple interface for infotainment and navigation, and the layout of the 8-inch touchscreen is configurable. The available nine-speaker Bose audio system is middling for a premium option. We like that there are still physical menu buttons to make navigating the touchscreen audio controls easier. Ditto the HVAC controls clustered together in a bank of old-school physical buttons and knobs, rather than integrated or partially integrated in the infotainment screen. There’s also a traditional shifter rather than convoluted push-button setup, though it’s a little too easy to accidentally pull the shifter back into Low instead of Drive — it requires more nuance and attention to the pull than it otherwise should. 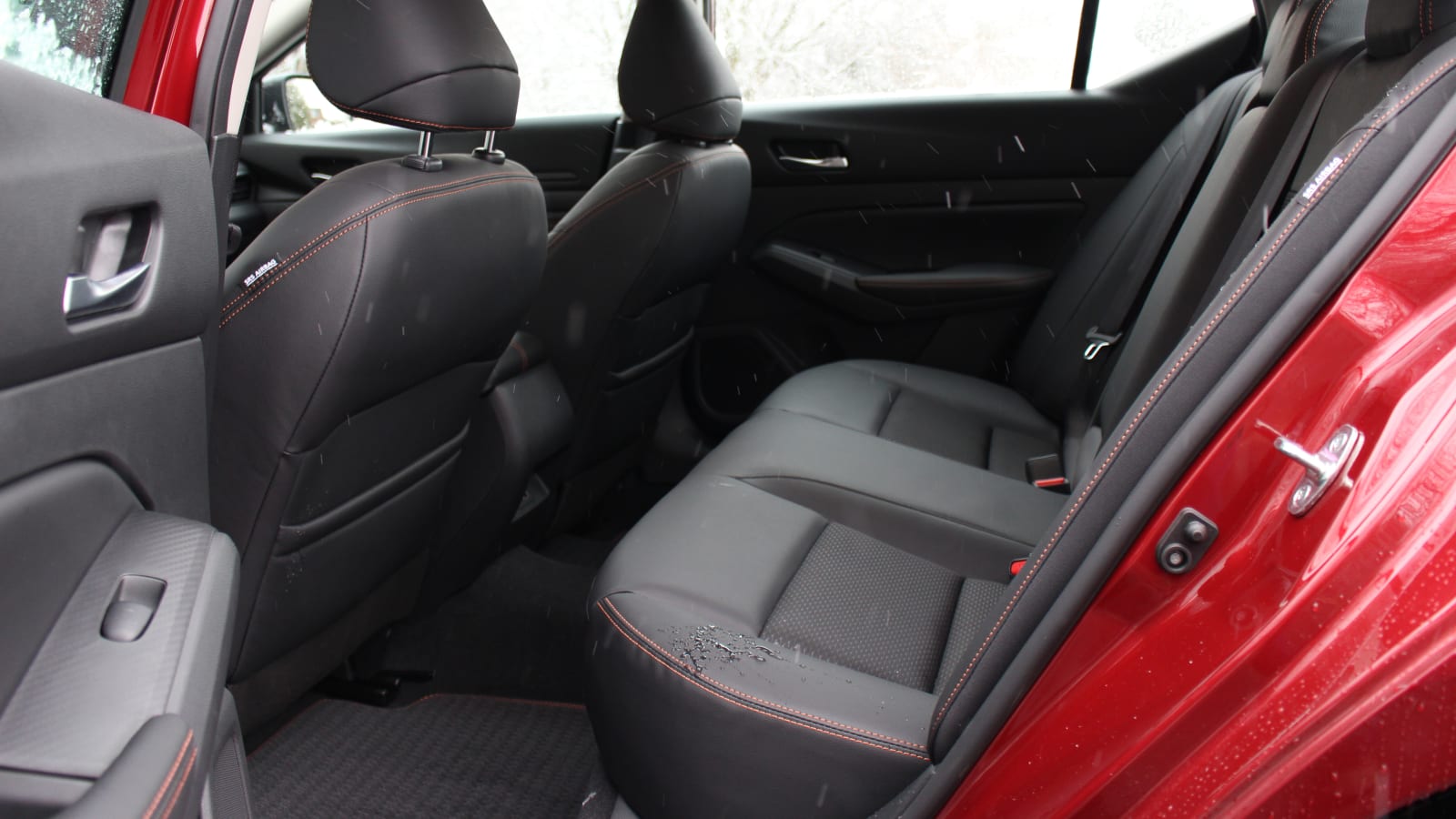 How big is the Altima?

The Altima feels small to drive but is roomy inside. It is 193 inches long, 73 inches wide and 57 inches tall, with a 111-inch wheelbase. Each of those dimensions is within an inch of the Accord and Camry. Altima’s curb weight ranges from 3,244 to 3,492 pounds, a little more than the weight range of the Accord, and a little less than the Camry.

Head- and legroom are sufficient for 6-footers sitting front and back, which is impressive, but actually now typical for midsize sedans. Parents should note that the Altima’s fixed headrests may frustrate when trying to secure a child seat. As always, we’d recommend bringing the child seat along during a test drive.

At an accommodating 15.4 cubic feet, Altima’s trunk space is a fraction more than Camry’s, but the Accord and Hyundai Sonata both trump it in the 16-cubic-foot range. Comparisons aside, the Altima’s trunk is still quite cavernous. What are the Altima’s fuel economy and performance specs?

The Altima has two engine choices, both of which are paired to a continuously variable transmission. The first is a naturally-aspirated 2.5-liter inline-four peaking at 188 horsepower and 180 pound-feet of torque with front-wheel drive. Optional all-wheel drive lowers output to 182 hp and 178 lb-ft. Fuel economy for the 2.5-liter S trim (FWD) is 28 mpg city, 39 mpg highway and 32 mpg combined, and falls to 27/37/31 in SR, SV and SL trims. With AWD, it’s 26/36/30, and the heavier SR and Platinum trims bring each of those numbers down to 25/35/29.

The SR trim comes standard with the 2.5, but gets the option of Infiniti’s innovative turbocharged variable-compression 2.0-liter inline-four VC-Turbo, with 248 horsepower and 273 pound-feet of torque (when run with premium fuel). Those figures drop to 236 horsepower and 267 pound-feet when pumped full of regular. Fuel economy stands at 25/34/29. We saw it outperform the highway figure with as much as 40 mpg over long distances of steady state cruising. The Altima delivers reasonably dynamic acceleration from the combination of the 2.5-liter four and the continuously variable transmission, a technology Nissan has been using for decades now and that works better than some other CVTs out there. That said, it’s still sluggish from a start, requiring a little wait before the revs are up and said acceleration can be felt. On the road, the Altima comports itself well with increased roll stiffness and decreased longitudinal stiffness, resulting in more responsive cornering and a good ride. The SR model offers a firmer suspension tune, and it’s verging on fun-to-drive on a winding road. A Honda Accord is still a superior driver than the Altima SR, but don’t count the Nissan out as a total bore.

The electric power steering system is our least favorite element. On center, it’s completely anesthetized and has what feels like too much play when driving casually around town. As such, it makes the Altima feel distant and uninvolving. Effort and response ticks up should you find yourself on a curving road, especially in the SR model, but the Altima’s competitors manage to provide a stronger car-to-driver connection at all times. We also found the steering to be a challenge at times on windy highways, as the on-center effort makes corrections difficult to gauge. It was hard to keep the car in the middle of the lane as a matter of second nature, with the electronic lane-departure nanny frequently buzzing (it’s far too intrusive) to let us know we had drifted.

What other Nissan Altima reviews can I read?

Our editors in Michigan test the base four-cylinder paired with all-wheel drive and the top-of-the-line Platinum trim level. 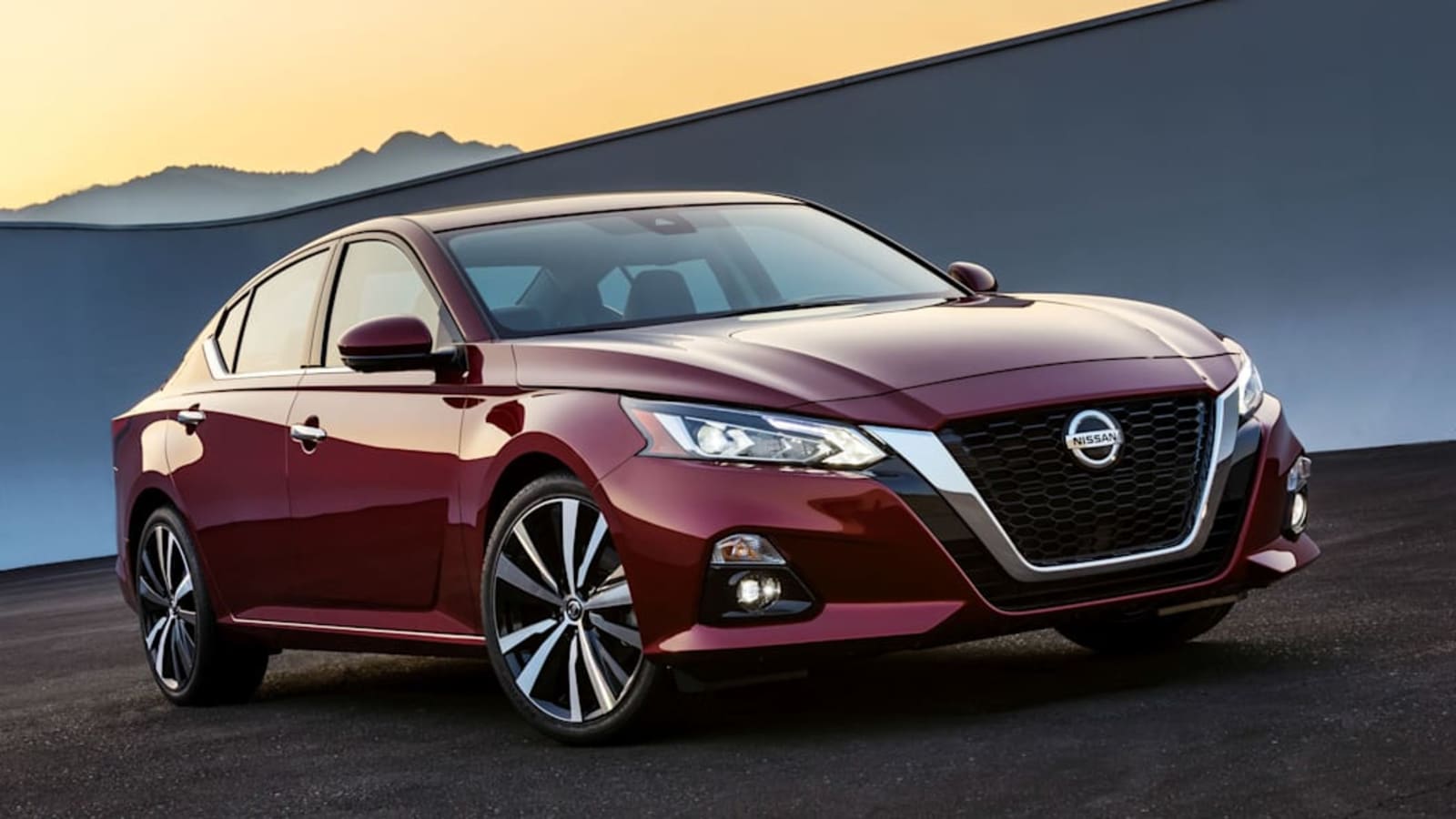 First impressions from when the current Altima was introduced, including more in-depth information about its design and engineering. 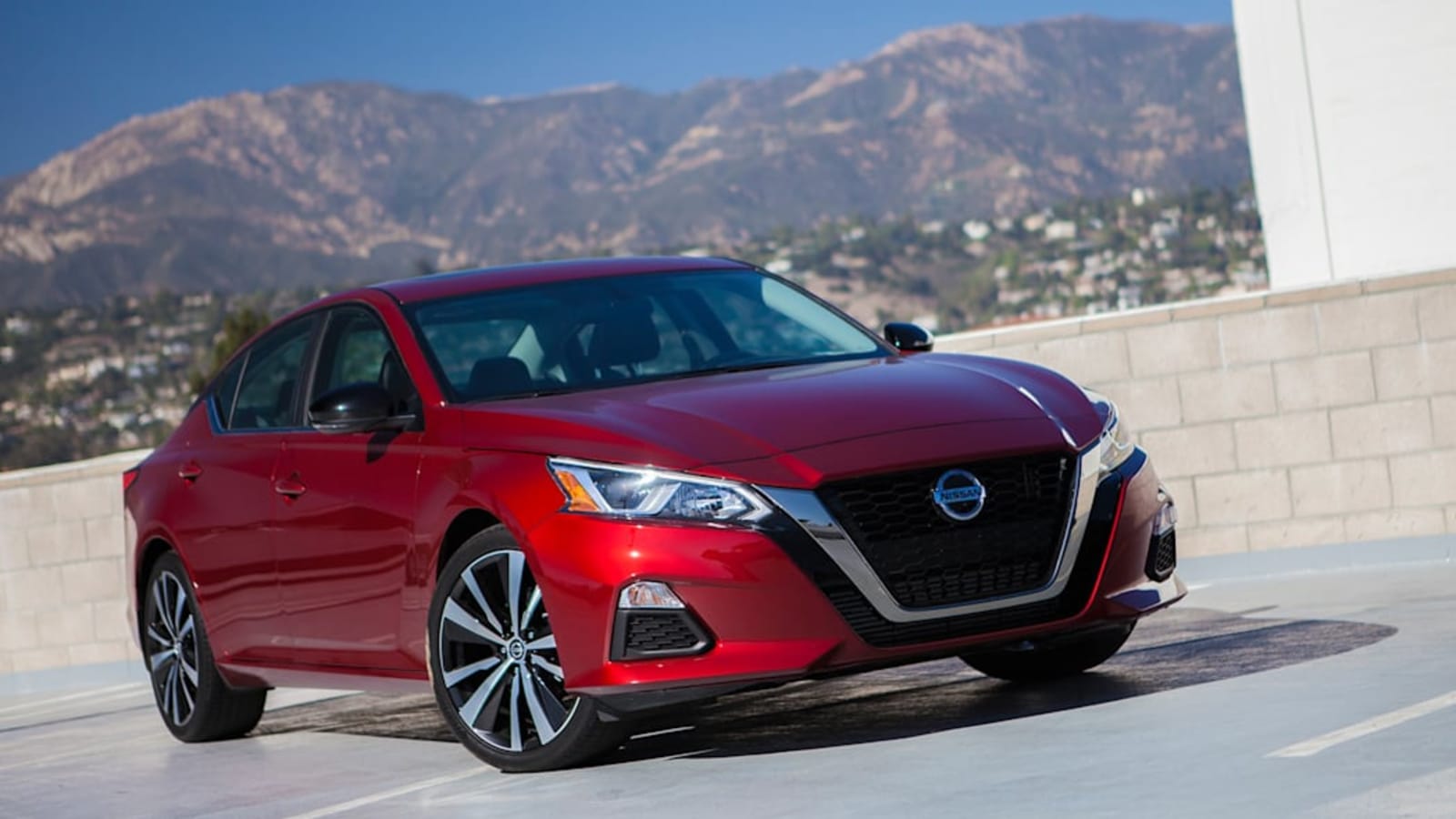 A closer look at the Altima equipped with all-wheel drive. 2021 Toyota Camry AWD vs. Nissan Altima AWD and Subaru Legacy | How they compare on paper

See how the Altima’s specs and dimensions compare to the other two midsize sedans available with all-wheel drive. 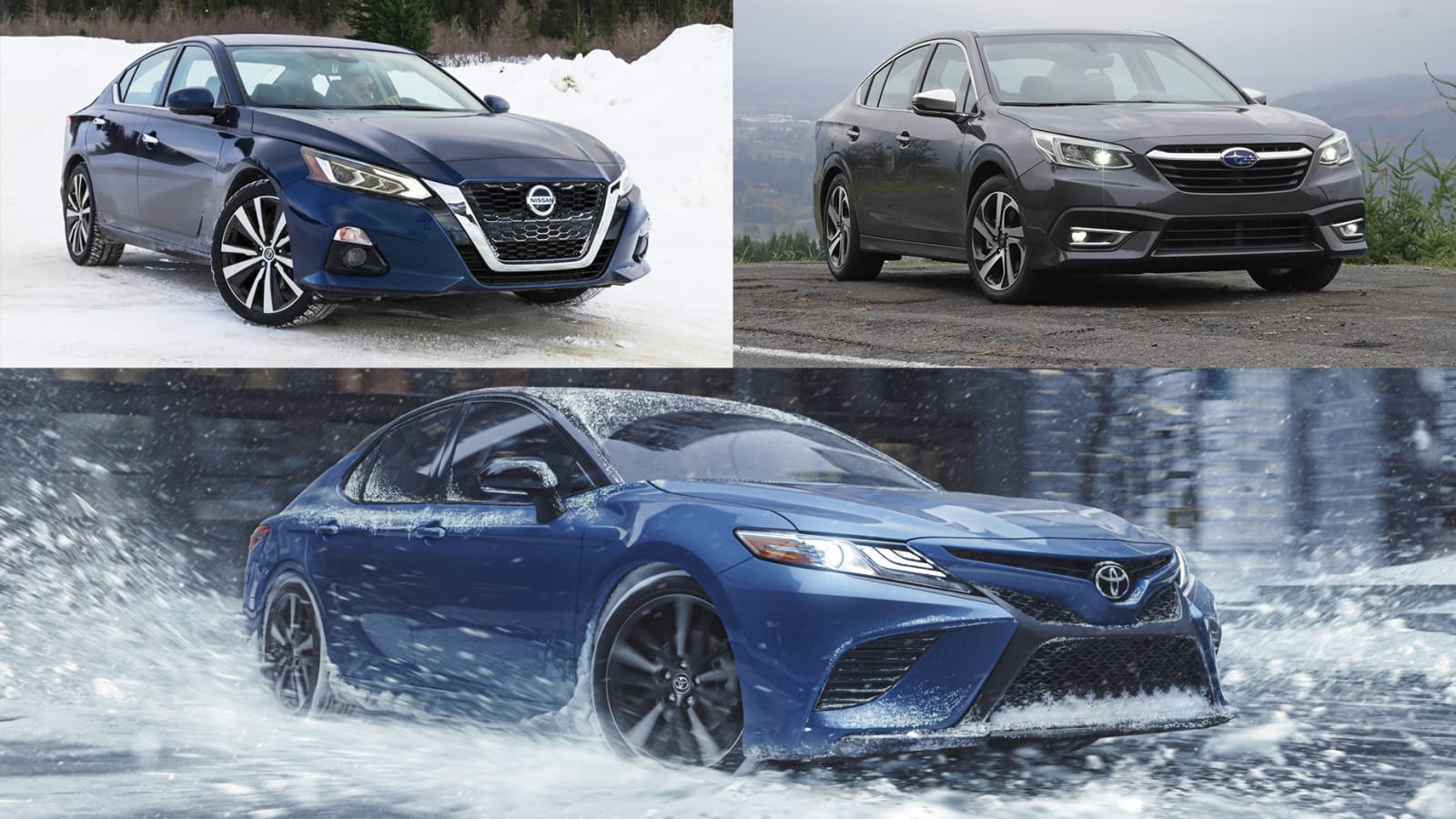 How much is the 2022 Altima price and what features are available?

Stepping up to the sporty SR trim offers a better value and adds a batch of standard features, including 19-inch alloy wheels, paddle shifters, LED headlights (standard starting on the SV trim), a blackened V-Motion grille, sport-tuned suspension, and the additional driver-assist technologies. Most important, it’s the only trim that offers the VC-Turbo engine as an option.

Trim pricing as follows, all prices including a $1,025 destination fee:

You can see a complete breakdown of 2022 Nissan Altima features, specs and local pricing here on Autoblog.

What are the Altima’s safety ratings and driver assistance features?

Forward collision warning and automatic emergency braking are standard on all models, as is a driver attention monitor. A wide suite of assist features can be had as an option even on the base S model that includes blind-spot and rear cross-traffic warning, rear parking sensors and reverse automatic emergency braking (a rare feature). Stepping up to SV makes all of those features standard equipment. The full range of Nissan’s ProPilot Assist, which includes adaptive cruise control and lane centering is standard on SL and Platinum trims, but not available on lower models.

The Insurance Institute for Highway Safety gives the 2022 Nissan Altima its highest rating of “Good” in all crash tests and named it a Top Safety Pick+. The government also rated the Altima highly in its crash tests, with five out of five stars overall and for side impact and rollover risk, and four stars for frontal crash protection.