Mercedes-Benz EQS reveals its powertrain and battery secrets in detail

Mitsubishi is auctioning its entire UK heritage fleet with no reserve

Win a car | The best giveaways this week, including a Tesla Model S

We’ve considered the Mitsubishi Eclipse Cross a better-than-expected option in a mostly uninspiring vehicular segment ever since it was introduced for the 2018 model year. It’s sized and priced somewhere between subcompact and compact crossovers, making it an in-betweener that may attract some buyers due to its distinctive positioning. And it’s been given a pretty comprehensive refresh for the 2022 model year that erases a few of our complaints and makes it more compelling, especially against subcompact crossover models like the Honda HR-V and Toyota C-HR.

In an odd bit of launch timing that we figure was probably shaken up by a certain global pandemic, there’s no 2021 edition. The 2022 Mitsubishi Eclipse Cross isn’t a total redesign — it rides on the same platform and is powered by the same engine and transmission as before — but the exterior design has been given a serious makeover while the interior gets some nice ergonomic upgrades that will make it easier to live with on a daily basis.

On the outside, the updates are focused on the very tips of the little crossover. A redesigned front fascia further separates the light clusters into upper LED driving lights and lower stacked headlights and fog lamps. Mitsubishi’s Dynamic Shield grille design features chrome swooshes that flank a blacked-out diamond-pattern mesh in the center. There’s a definite human-esque look to the face of the Eclipse Cross, and in person the overall appearance is aggressive and interesting. 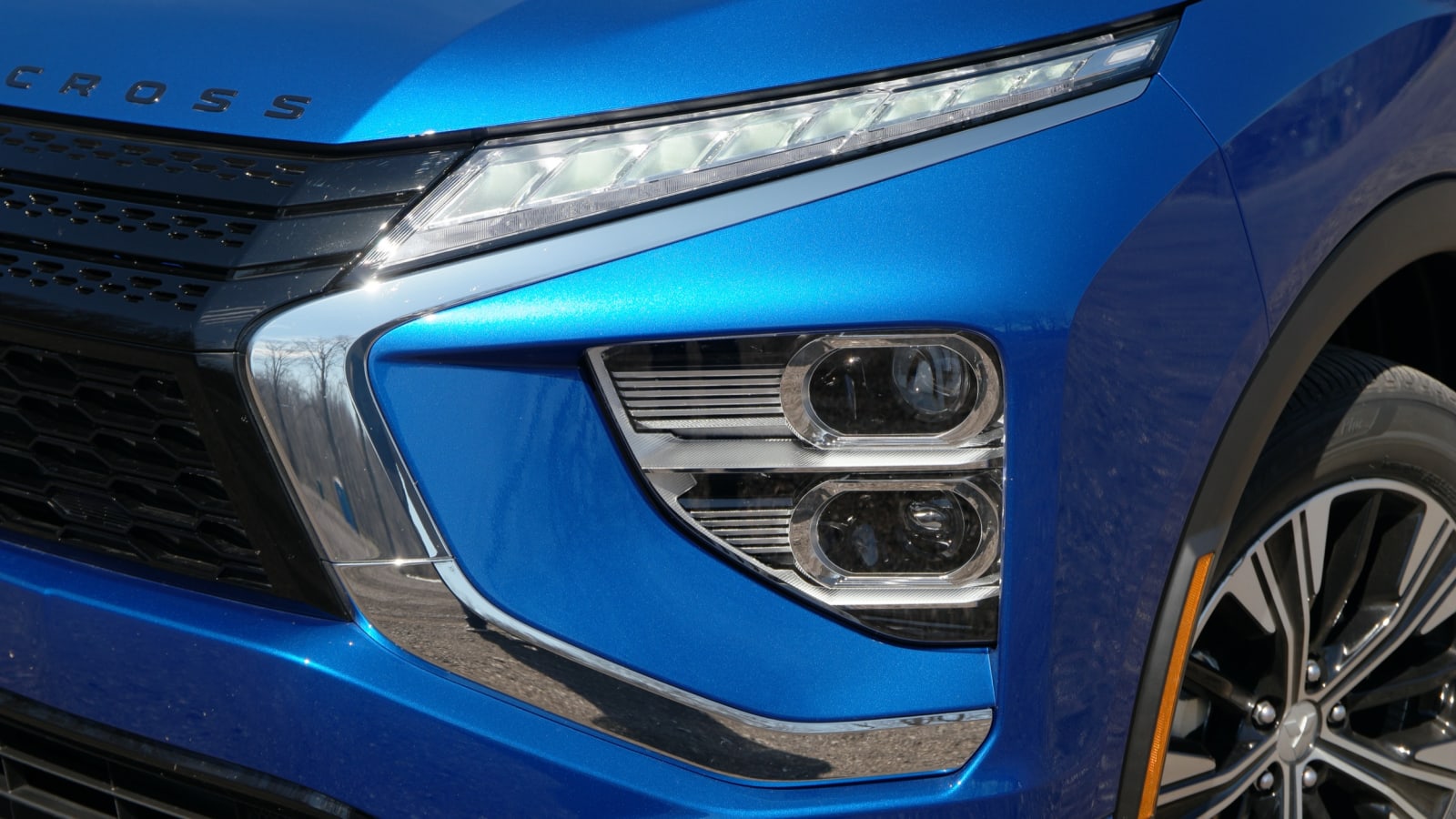 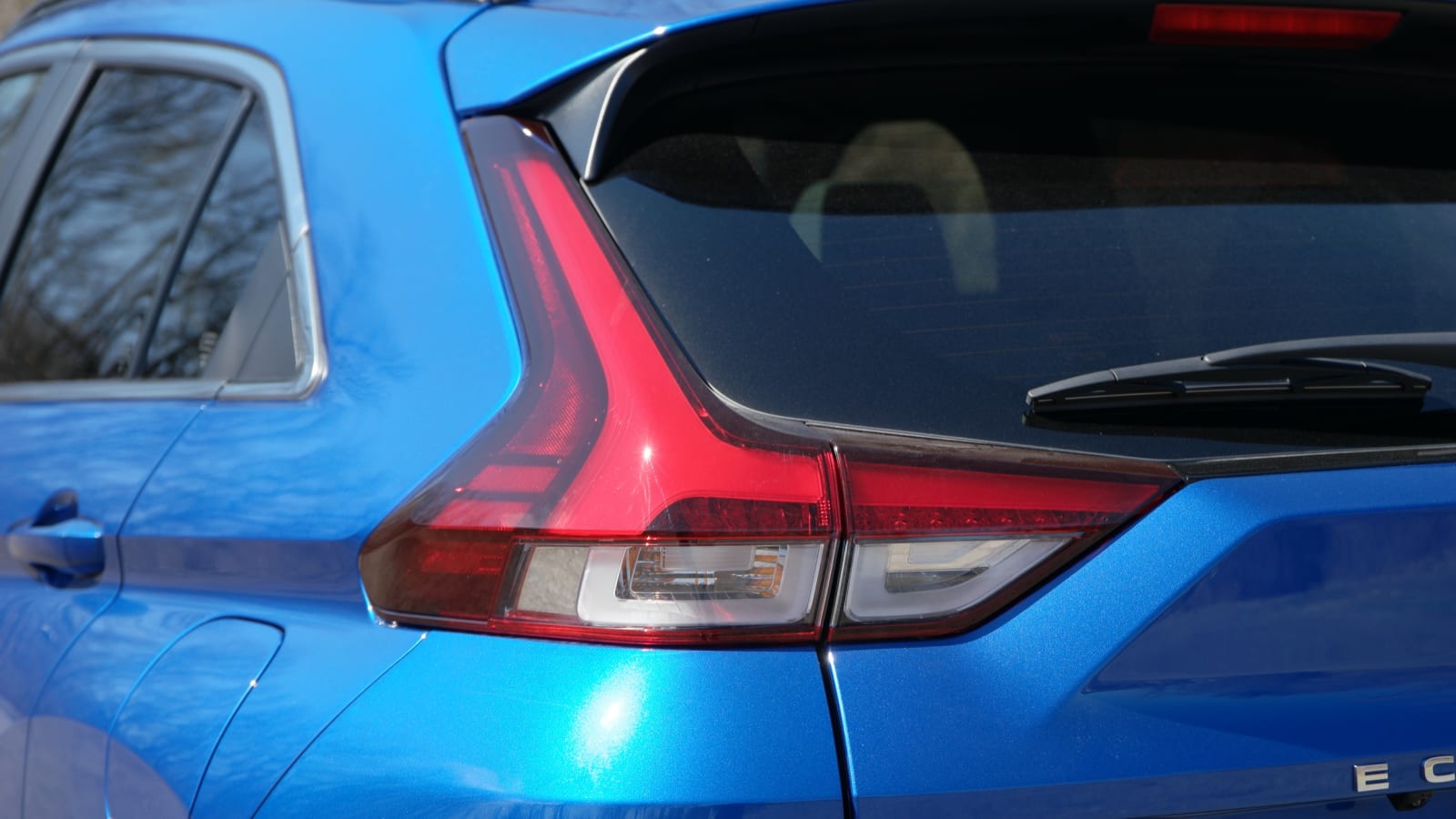 The rear received an even bigger makeover than the front. Gone is the two-piece rear glass that was bisected by a faux spoiler-shaped panel with full-width taillights, and in its place is a much more conventional hatchback with a larger single-piece window. The 2022 Eclipse Cross is a significant 5.5 inches longer than the 2020 model, and four of those were tacked on the back end. That makes for a bump in cargo capacity to 23.4 cubic feet (up 0.8 over the 2020 version) with the rear seat in place and 50.1 (an increase of 1.2 cubic feet) with the second row folded. It also adds 11% more floor area for long and/or wide items.

While the added space is a welcome improvement, the reconfiguration of the Eclipse Cross’s dashboard and center console may be even more useful. The infotainment screen, which measures 7 inches on the base ES model and 8 inches on everything else, was moved a couple inches closer to the driver. That allowed Mitsubishi to remove the unloved, Lexus-like console-mounted touchpad and instead rely solely on touchscreen inputs, which in turn freed up space for better cupholders.

Models equipped with the larger screen include Apple CarPlay and Android Auto, and a TomTom-based navigation system is also included on SE and SEL trims. A column-mounted flip-up head-up display remains available. We found the interior trim and textures to be of reasonably quality considering the car’s price point. There aren’t any obvious cost-cutting measures to be found, and some options, like a heated steering wheel and rear seats, are unexpected. Another praiseworthy addition for 2022: physical knobs for volume and tuning. 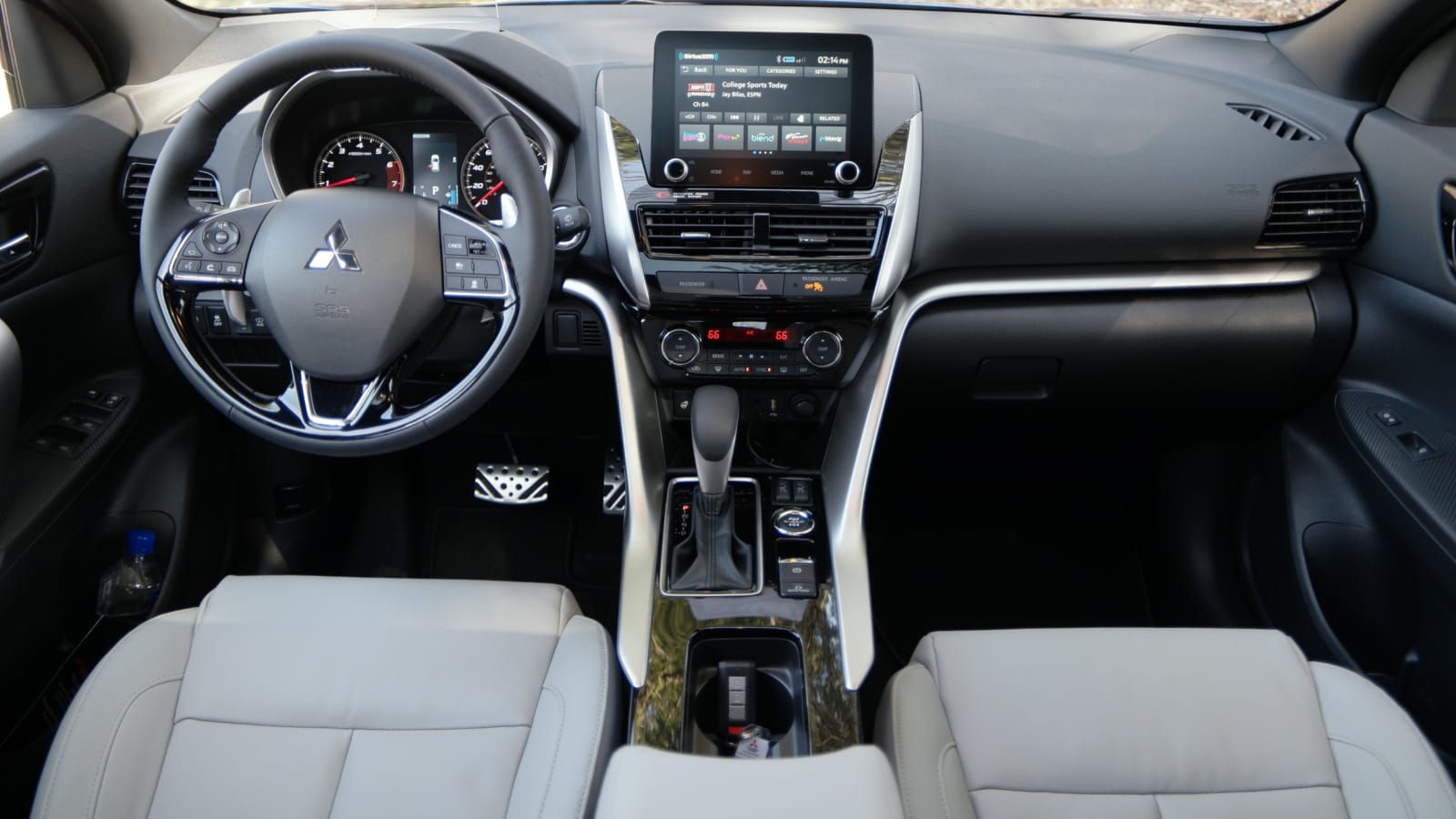 As we mentioned at the outset, the Eclipse Cross is uniquely sized, with a wheelbase that’s longer than a Honda CR-V but a overall length that’s shorter. There’s plenty of legroom for four passengers but less headroom than the majority of its competitors. The sliding rear seat is useful for maximizing space for passengers, cargo, or somewhere in between. In the real world, there’s enough room for a couple or small family to enjoy a weekend getaway with all their luggage in tow if they aren’t heavy packers.

We’ve never really considered the Eclipse Cross to be particularly sporty, but its 1.5-liter turbocharged four-cylinder engine’s 152 horsepower and, more important, 184 pound-feet of torque move the little ‘ute with greater verve than most of the subcompact crossover segment. An immediate, foot-to-the-floor launch is enough to leave all four wheels gripping for traction on loose surfaces as the continuously variable automatic transmission puts the engine in the sweet spot of its mid-range powerband.

The Eclipse Cross isn’t exactly quick, but it never feels slow, either. And that turbocharged engine means it won’t feel gutless at high elevations like the naturally aspirated Honda HR-V and Subaru Crosstrek. CVTs aren’t exactly desirable for driving dynamics, but at least the Mitsubishi’s doesn’t force the engine to whine at uncomfortable volumes like the Honda’s, aided in no small part by the Eclipse Cross’s additional 57 lb-ft of torque over the HR-V. A pair of column-mounted paddle shifters work well enough if the driver wants to row through eight preprogrammed ratios. 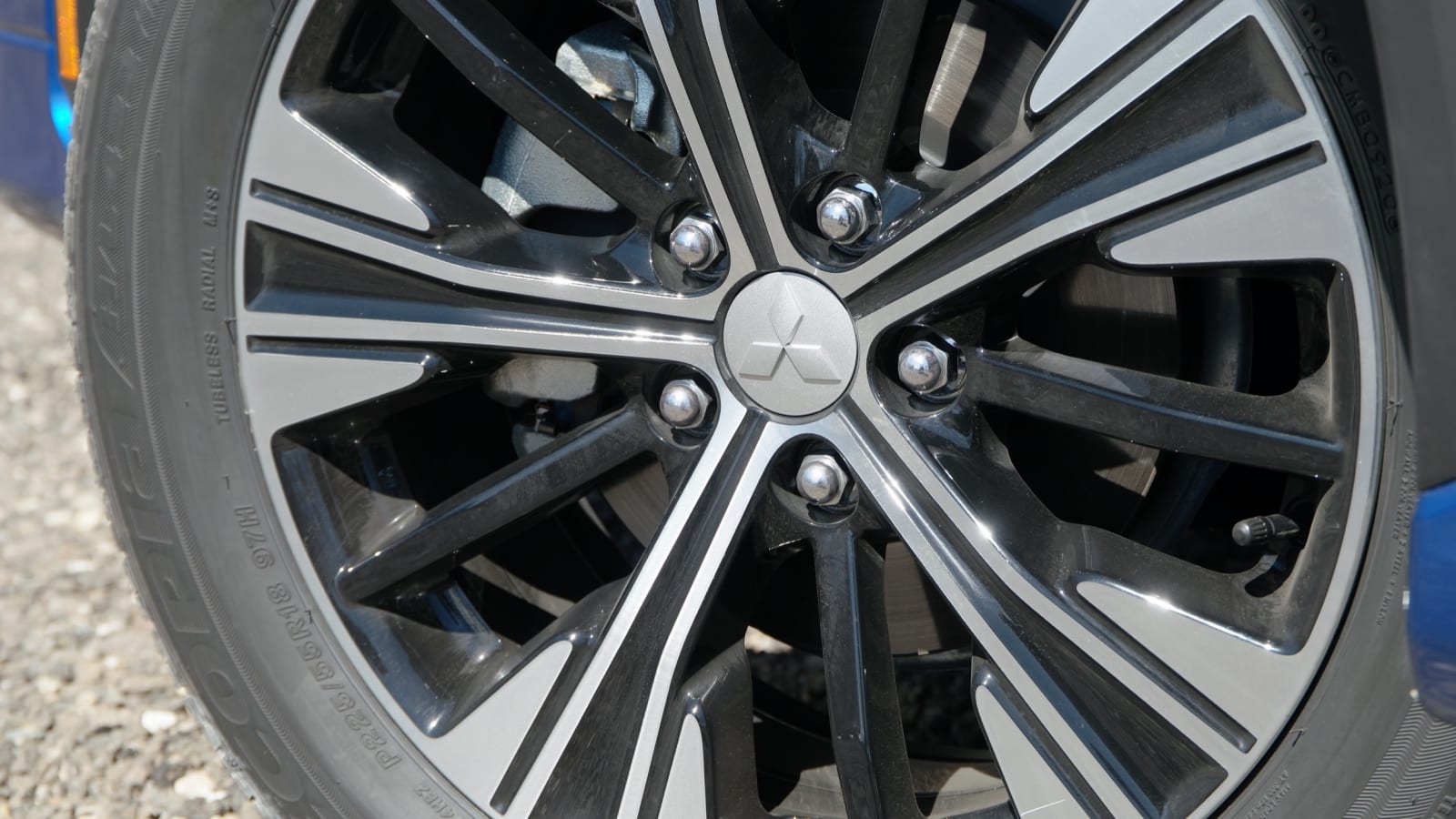 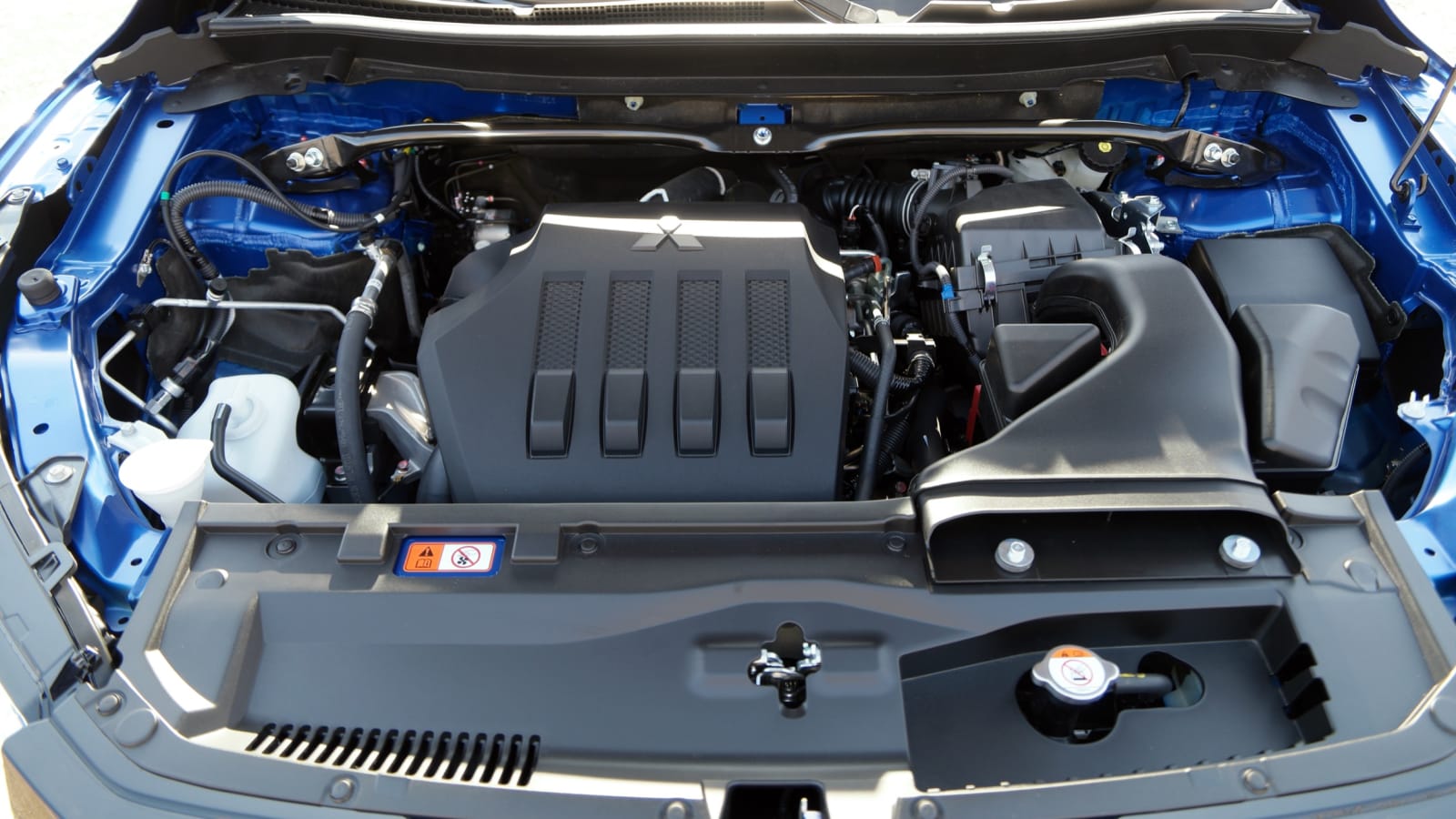 That engine is a carryover, but the Eclipse Cross’s suspension has been tweaked for 2022. Springs and shocks were retuned, with larger shafts and updated bounce and rebound calibrations. A more rigid rear suspension cross member stiffens the chassis further.

Even with the added stiffness, the Eclipse Cross is tuned on the comfortable side, as you would expect. There’s a fair amount of body roll, but we’d guess owners will take that tradeoff in favor of a cushy ride that soaks up even large bumps and potholes without drama. Steering is as light and overboosted as is typical for subcompact and compact crossover contenders, but at least it feels precise and quick enough with fewer than three turns lock-to-lock.

So far, so good. But things aren’t all rosy in Eclipse Cross land. Fuel economy isn’t great, with most front-wheel-drive models achieving 25 mpg city, 28 highway and 26 combined. Those with all-wheel drive get 25 mpg city, 26 highway and 25 combined. The base ES model nudges those numbers up by one across the board, likely because of its small 16-inch wheels. That’s still several mpg short of many competitors, though it’s also fair to point out we complain that those same competitors are too slow and have more irritating transmission programming. Pick your poison, we guess.

There’s also an issue of back seat ingress and egress. Due to the rapidly sloping roofline, entry through the rear door sometimes requires interesting contortions for tall people.

Finally, while hitting a reasonable base price of $25,190 (including a $1,195 destination fee) is nice, the active-safety features on that base ES are limited to forward-collision mitigation and lane departure warning. Buyers have to pass the LE and go to the SE to gain blind-spot warning and rear cross-traffic alert. Skip SEL and go straight to the Touring Package to add forward-collision mitigation with high-speed braking and pedestrian detection plus adaptive cruise control. While not uncommon, it’s certainly better when safety equipment isn’t bundled with other high-cost options that buyers may not be able to afford. 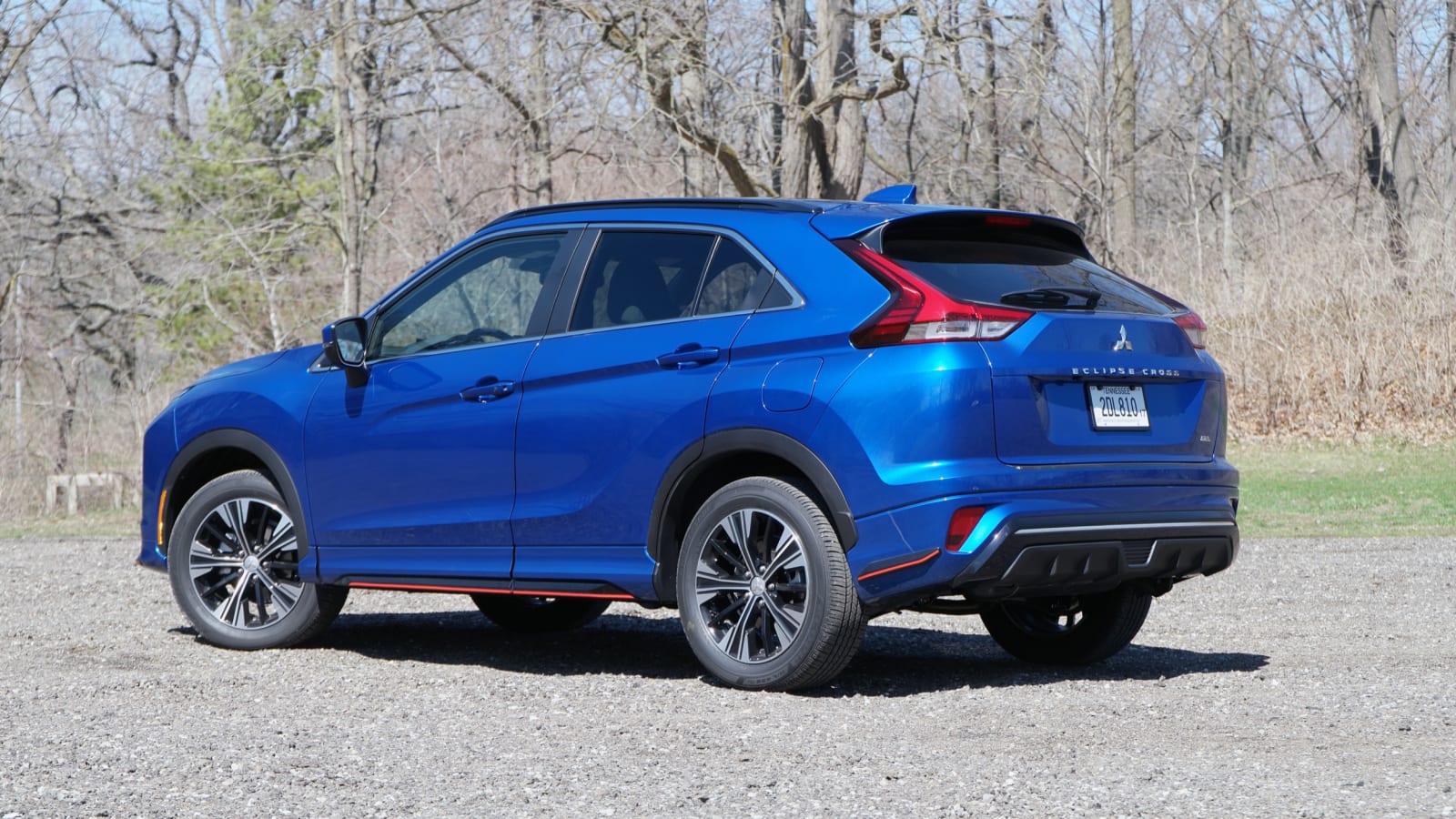 All of that said, even a fully loaded 2022 Eclipse Cross SEL with the Touring Package and Mitsubishi’s well-regarded Super All-Wheel Control all-wheel-drive system is reasonably priced at $32,675 out the door. And Mitsubishi’s generous 10-year or 100,000-mile standard powertrain warranty provides peace of mind.

Add it all up and the refreshed 2022 Eclipse Cross is certainly worth a look for buyers shopping for a small crossover. It’s demonstrably though incrementally improved over the previous version and, well, still a better-than-expected option in its segment.