The Lexus NX is one of the more recent additions to the Lexus lineup, having made its debut for the 2015 model year. In that time, it’s only received a couple of facelifts. Now, the small crossover is getting its first full redesign in the form of the 2022 Lexus NX. And while it may look evolutionary, it offers a load of new and welcome features.

The new NX is now built on the TNGA-K platform, which also underpins the Toyota RAV4 and Camry and the Lexus ES among other small to midsize models. Lexus says it’s structurally more rigid and offers a lower center of gravity. Fitted to this platform is a plethora of powertrains. The NX 250 gets a naturally aspirated 2.5-liter four-cylinder making 203 horsepower and 184 pound-feet of torque. It’s available with front- or all-wheel drive. The NX 350h hybrid gets the same engine but with a couple of electric motors. That gives it all-wheel drive as well as 239 horsepower. The regular NX 350 gets a turbocharged 2.4-liter four-cylinder making 275 horsepower and 317 pound-feet of torque, plus all-wheel drive. Topping the range is the NX 450h+ with the RAV4 Prime’s 2.5-liter four-cylinder and larger electric motors making 302 horsepower. It’s also only available with all-wheel drive and has a 36-mile electric range. The non-hybrid powertrains now come with an eight-speed automatic, but the hybrids continue to use CVTs.

All of these new mechanical updates fit under a fresh but familiar-looking shell. It’s short and taut with many curves and creases, but it’s generally smoothed and softened compared to the previous model. The most distinct change is at the rear where the NX adopts a full-width taillight like the IS and UX. It also features the brand’s name spelled out in letters just below the taillight. 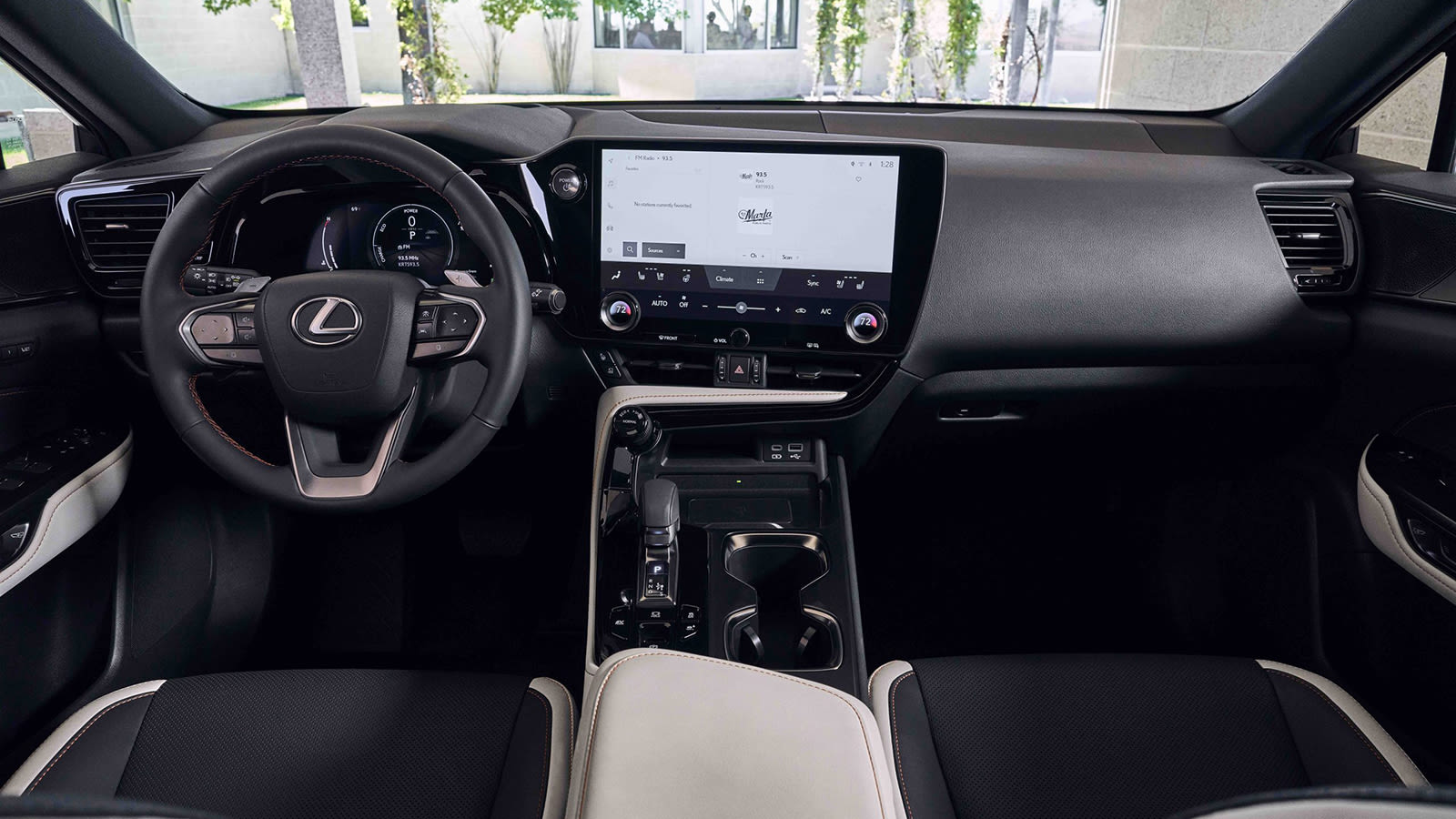 The inside is more significantly updated, and the focal point is undoubtedly the new infotainment system. The old touchpad and mouse designs are dead, and the NX will be the first to use this new touchscreen system. It was developed by a division at Toyota’s North American headquarters, and seems much more intuitive, though we’ll have to reserve final judgment until we try it ourselves. It uses either a 9.8-inch screen or optional 14-inch unit. The latter incorporates dedicated touch buttons for comfort controls and physical temperature dials blended into it. The smaller screen uses all physical controls for comfort functions. Both have a physical volume knob, too.

The infotainment screen is fitted to a panel that blends into the instrument display, which itself features a 7-inch screen. The dash, doors and console all have flowing planes that intersect with each other, as seems to be common among Toyota products. Plenty of up-to-date technology is packaged in here, too. Sixty-four-color ambient lighting is available, along with wireless charging and a 10-inch head-up display. There’s also wireless Apple CarPlay and Android Auto, integrated music streaming services such as Apple Music, a digital phone key, user profiles for car settings, digital rearview mirror, plus an AI assistant that responds to natural speech commands.

One of the more unusual bits of technology are the electronic door handles. While they aren’t a new technology in and of themselves, they’re combined with a safety feature to prevent you from opening a door into an oncoming cyclist or car. In combination with the blind-spot system, it will notice if a vehicle is coming, alert you, and keep the door from opening until the vehicle has passed. Though, in the event that it malfunctions or gets a false warning, it can be overridden with additional presses from the inside, and the inside button can be pulled via a tab to physically unlatch the car if power is lost.

The new Lexus NX goes on sale in the third quarter of this year. Pricing hasn’t been announced, but we would expect it to have a similar base price as the outgoing one, which is around $38,000.