2022 Honda Civic Sedan vs. other compacts | How they compare on paper

Here are all 11 generations of the Honda Civic

Toyota shows how hydrogen technology could save the exhaust note

Toyota has two all-new 8-passenger SUVs in the works, and one's a Lexus

Honda just blessed the world with a new Civic. Well, at least part of a Civic. The 2022 Honda Civic sedan debuted, but we’re still waiting on the Hatchback, Si and Type R variants to come down the road. Regardless, we know most of the important details about the 11th generation Civic now, so it’s time to do some comparing.

We chose a collection of the most popular compact sedans out there to compare it to, including the Mazda3, Toyota Corolla, Volkswagen Jetta, Hyundai Elantra and Nissan Sentra. There are more, but we’ll keep it to just six for now. Below, you’ll find the comparison chart with all the numbers. 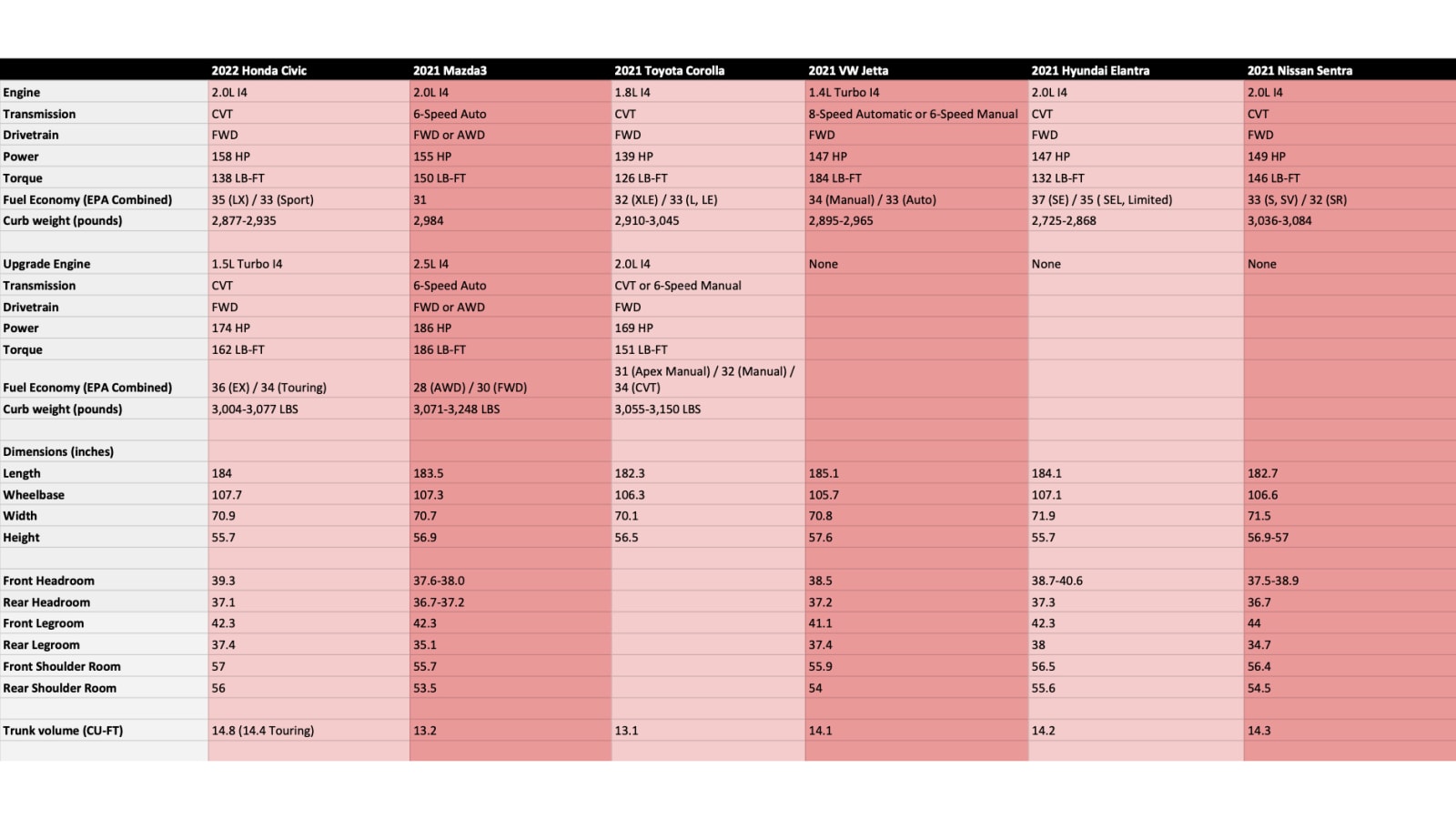 The 2022 Honda Civic gets entirely carryover engines for the new model. That means the 2.0-liter four-cylinder and 1.5-liter turbocharged four-cylinder options are back. Just like before, the 1.5-turbo is the upgrade engine that both makes more power and returns better fuel economy.

Rated at 158 horsepower, the Civic’s base 2.0-liter is more powerful than every last one of its competitors’ standard engines. It’s obviously no barnburner, but it’s a great place to start. Volkswagen wins the torque war with its boosted base engine at 184 pound-feet of torque, and the ability to option it with a manual transmission also makes it attractive for someone who likes to do their own shifting.

Unfortunately, Honda dropped the manual from the sedan a short time ago, and it isn’t making a return in the redesigned car. That means your only transmission choice is a CVT (re-tuned for 2022). The CVT is the most popular transmission of choice in this class for its ability to help achieve excellent fuel economy, but if you really don’t want a CVT, both the Mazda3 and Jetta offer traditional automatic transmission options. Hyundai has the best fuel economy of all these cars, maxing out an impressive 37 mpg. Honda is a close second with the Civic’s 36 mpg maximum, and the rest are a couple mpg or more below that.

We didn’t include dedicated performance options in this comparison like the Elantra N Line, Jetta GLI or Mazda3 Turbo, just because those would match up best to the Si that will eventually arrive. That said, if you want a little more pep, Honda’s 1.5-turbo is comparable to the Corolla with its 2.0-liter, or the Mazda3 with its 2.5-liter four-cylinder. Mazda wins for the most power and torque on tap here. Plus, Mazda offers all-wheel drive with the 3, something none of these other six make available. The Subaru Impreza is standard with all-wheel drive, too, in case that’s one of your must-have features in this class. Honda takes the fuel economy crown for these higher power options by a good margin. 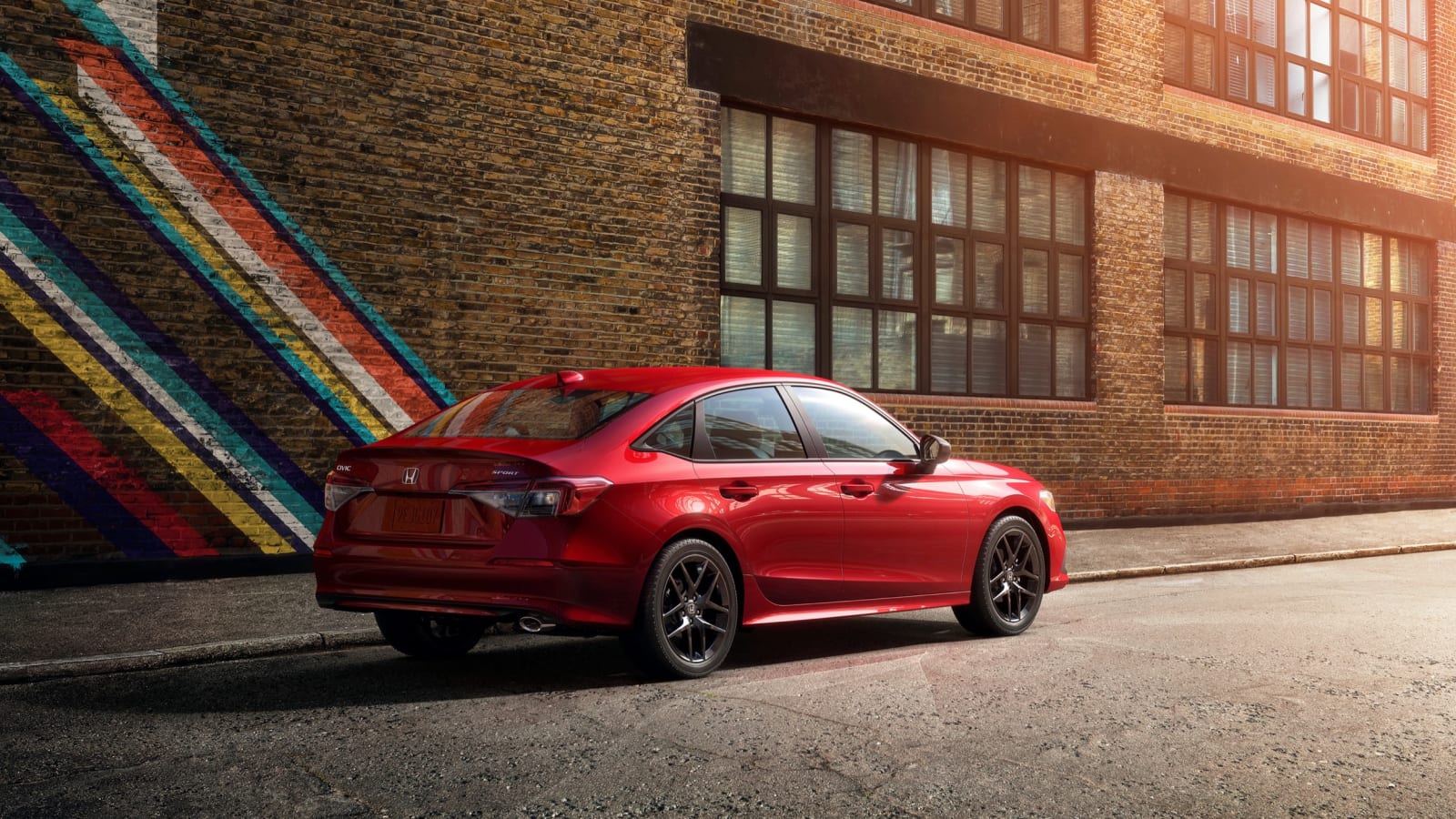 Before we dive into how the new Civic compares to the competition, we’ll explain how this new generation is different from the old. Total size growth is minimal, but the Civic is still bigger this year than it was before. Overall length us up by 1.3 inches, and wheelbase is up by 1.4 inches. That translates to very little change inside. Legroom in front and back are identical to the previous Civic, and cargo capacity is actually down to 14.8 cubes versus the 15.1 cubes it maxed out at before.There’s an extra inch of rear shoulder room, but it must be packaging related, because the car is no wider for 2022. Unfortunately, weight is the big loser here. The new Civic weighs 106 pounds more than before in its base form. When you compare the loaded-up 2022 Touring to its 2021 Touring counterpart (both 1.5-turbo-equipped), the new Civic is 114 pounds heavier.

Versus the score of competitors, the Civic is on the larger side. Both the Jetta and Elantra are technically longer, but just barely so. Strangely, Toyota provides no interior dimensions for the Corolla sedan. We had little to no complaints about how spacious the back seat of the last Civic was, so keeping it the same this year works. However, competitors like the Elantra and Jetta have gone and matched or bettered the Civic in rear legroom. All three of those will serve backseat passengers well. It’s when you get into a Mazda3 or Sentra that the rear could begin to feel a bit cramped. Those couple are still deserving of their compact car status, whereas the new Civic hardly seems compact in any seat.

Another big plus for the Civic is its spacious trunk. And even though its size went down this year, it’s still the second-biggest in this class. Only the Kia Forte listed at 15.3 cubic-feet (not included in this comparison) can beat it for quoted volume. 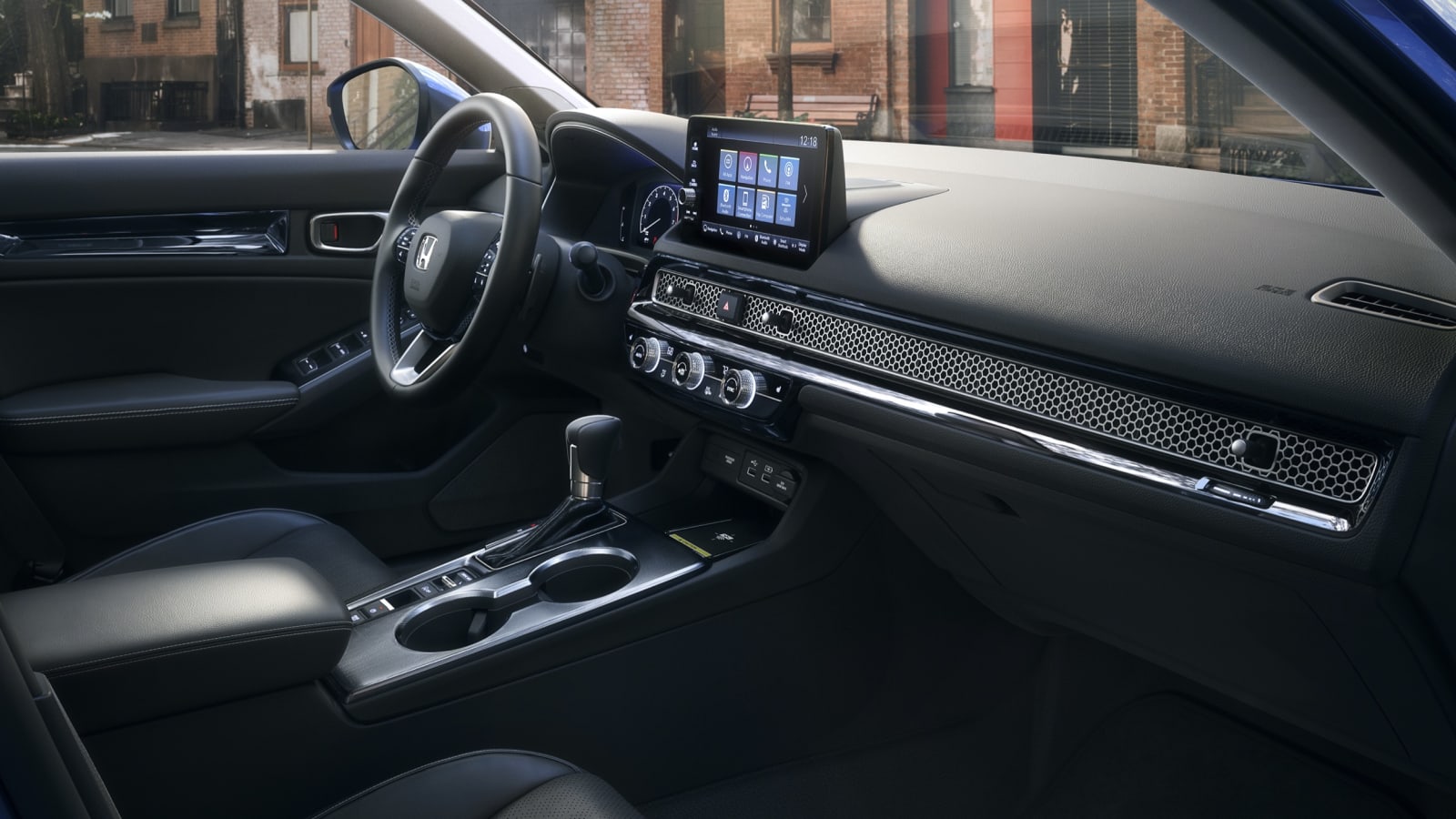 The biggest improvement in this year’s Civic is undoubtedly its interior design. We haven’t sat in it yet, but we’re already impressed at the clever, horizontal air vent integration, use of technology and continued excellence in ergonomics and utility. Mazda still wins any argument when it comes to interior quality and luxuriousness in this segment, but Honda is creeping up as a very close second.

For some visual comparison, we’ve compiled interior shots for all six of these models into a gallery below that you can scroll through. Let us know which you like best in the comments.