Watch the Road Zipper move concrete barriers like they're weightless

2023 Toyota bZ4X gets year of free charging at EVgo stations

There I sat, or rather, there I gently glided sideways in the 2022 Cadillac CT4-V Blackwing. Woodward Avenue only had an inch of snow covering its surface, and this Cadillac was equipped with Michelin Pilot Alpin winter tires, but it hardly mattered. The CT4-V Blackwing rides on GM’s Alpha platform, the same as the Chevrolet Camaro, and at this moment, the Caddy was embracing its inner Camaro.

As soon as I made this connection, I caught up to a wild Camaro SS that seemed to be having an even tougher time accelerating. The 0-10 mph time I just cracked off was eons slower than this CT4’s quarter mile time in the dry, and there may have been more sideways movement than forward movement, but at least I was moving.

Still, as much as I was willing it to be, this Cadillac will never be an all-season daily driver.

In every occasion outside of a freak snow squall, the CT4-V Blackwing is a charmer to the Nth degree. It’s during the winter that its high-output 3.6-liter twin-turbo V6, notchy six-speed manual and rear-wheel drive turn from massive benefits into crippling factors. As much as the Blackwing makes you want to sell off all your other assets to put it in the driveway, make sure you keep a winter beater around for snow days. Another few tenths of an inch, and this Cadillac — a future king of Woodward in the warm months — would have been stranded on America’s first paved road. 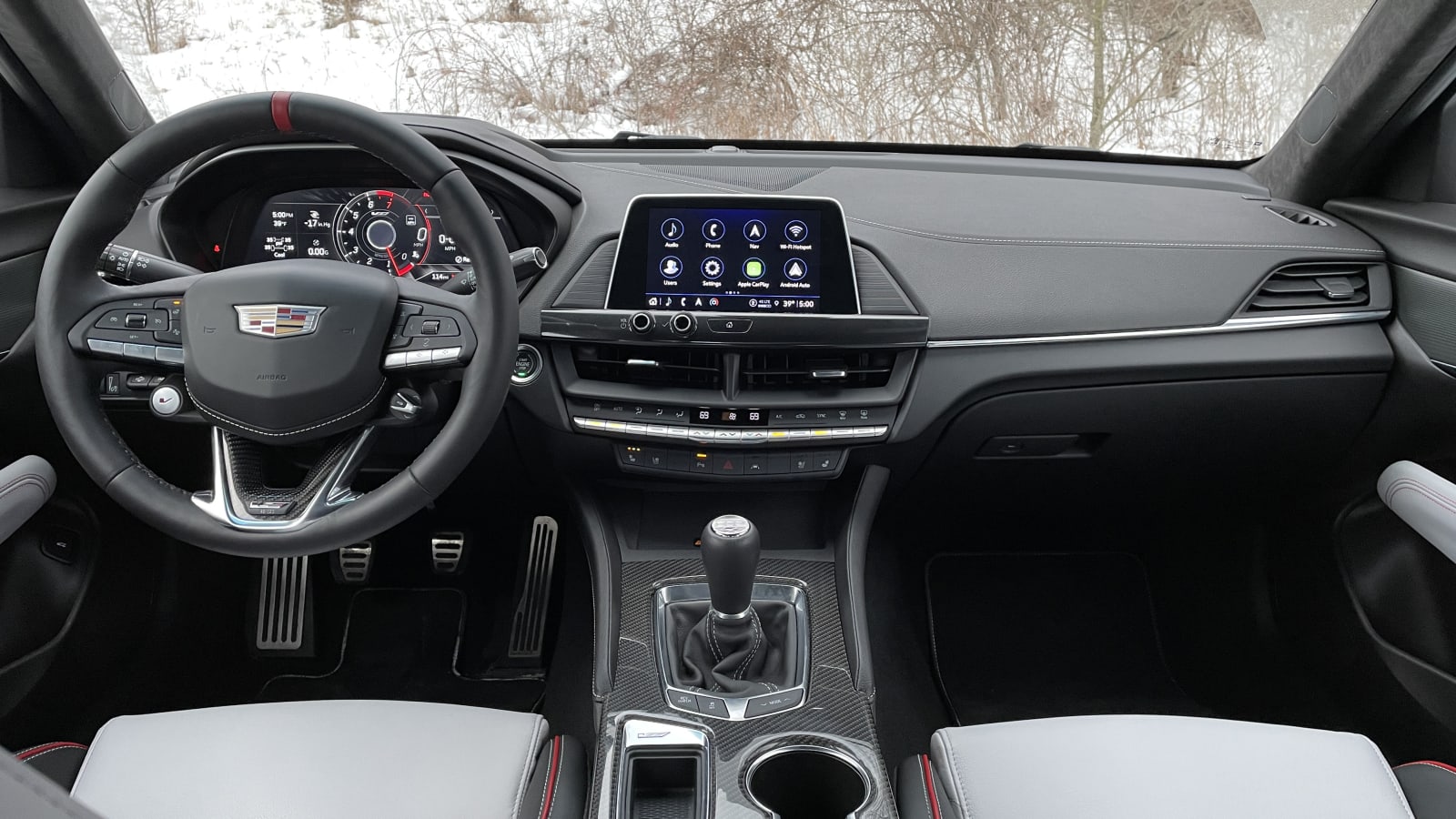 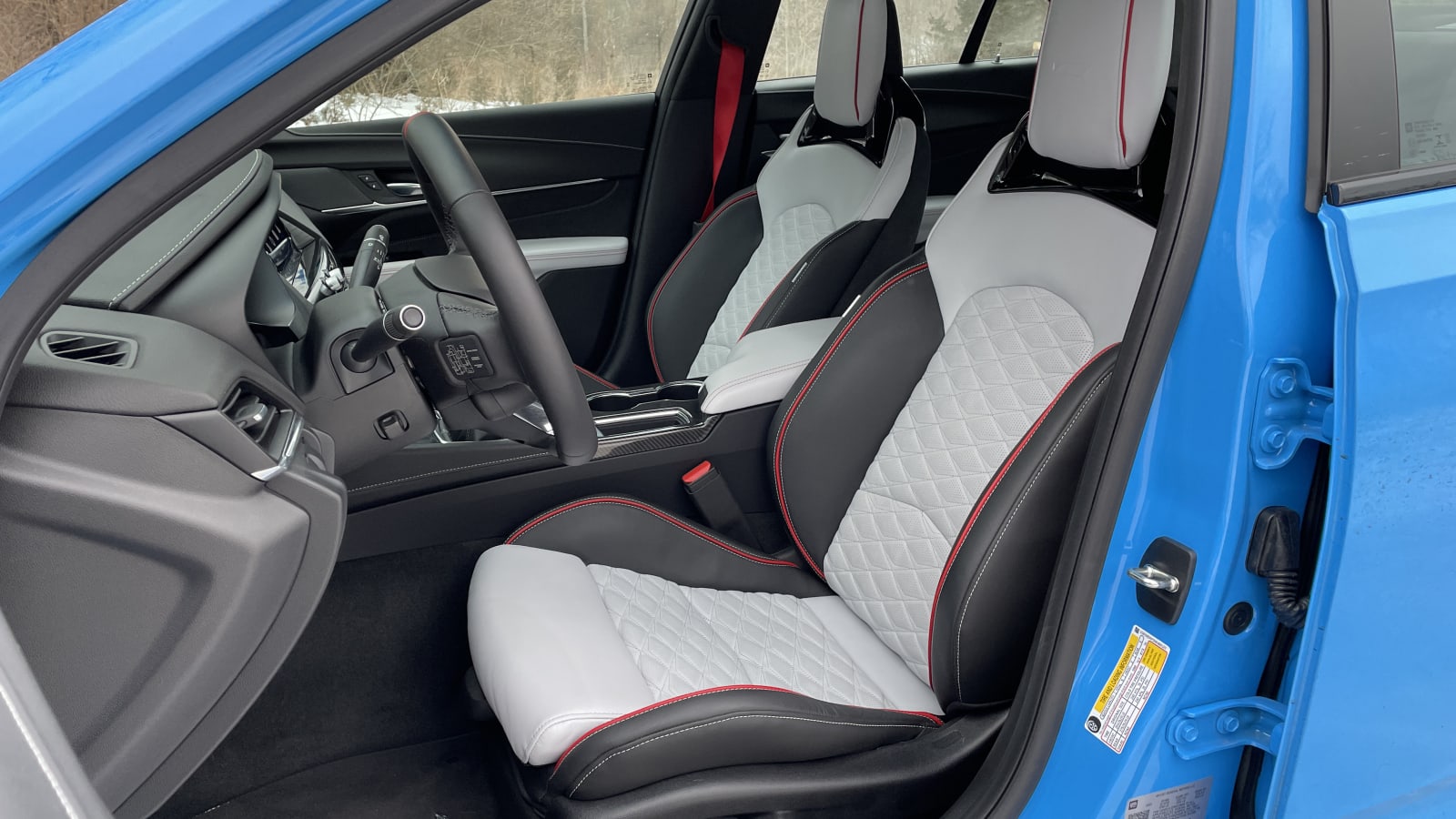 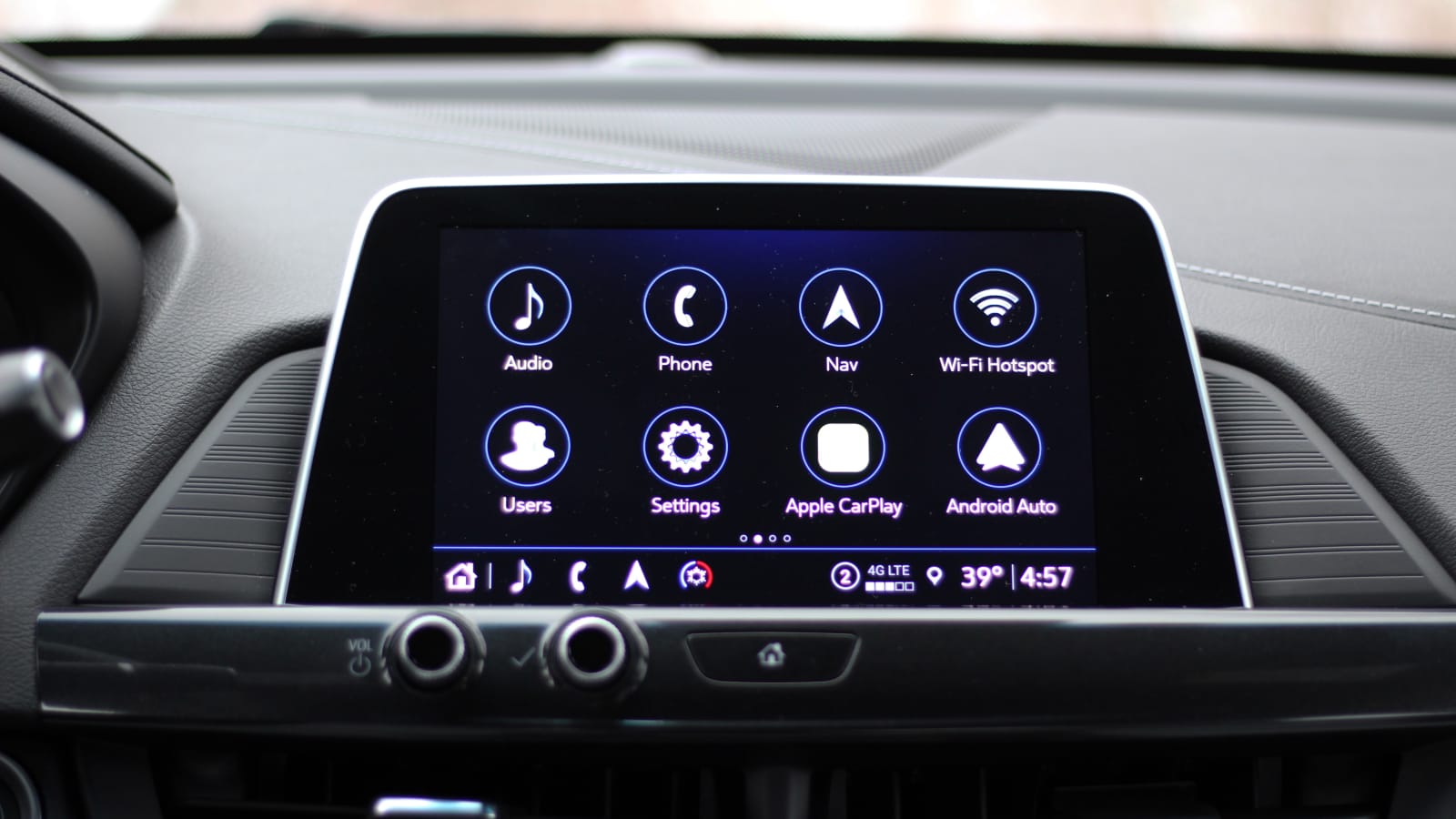 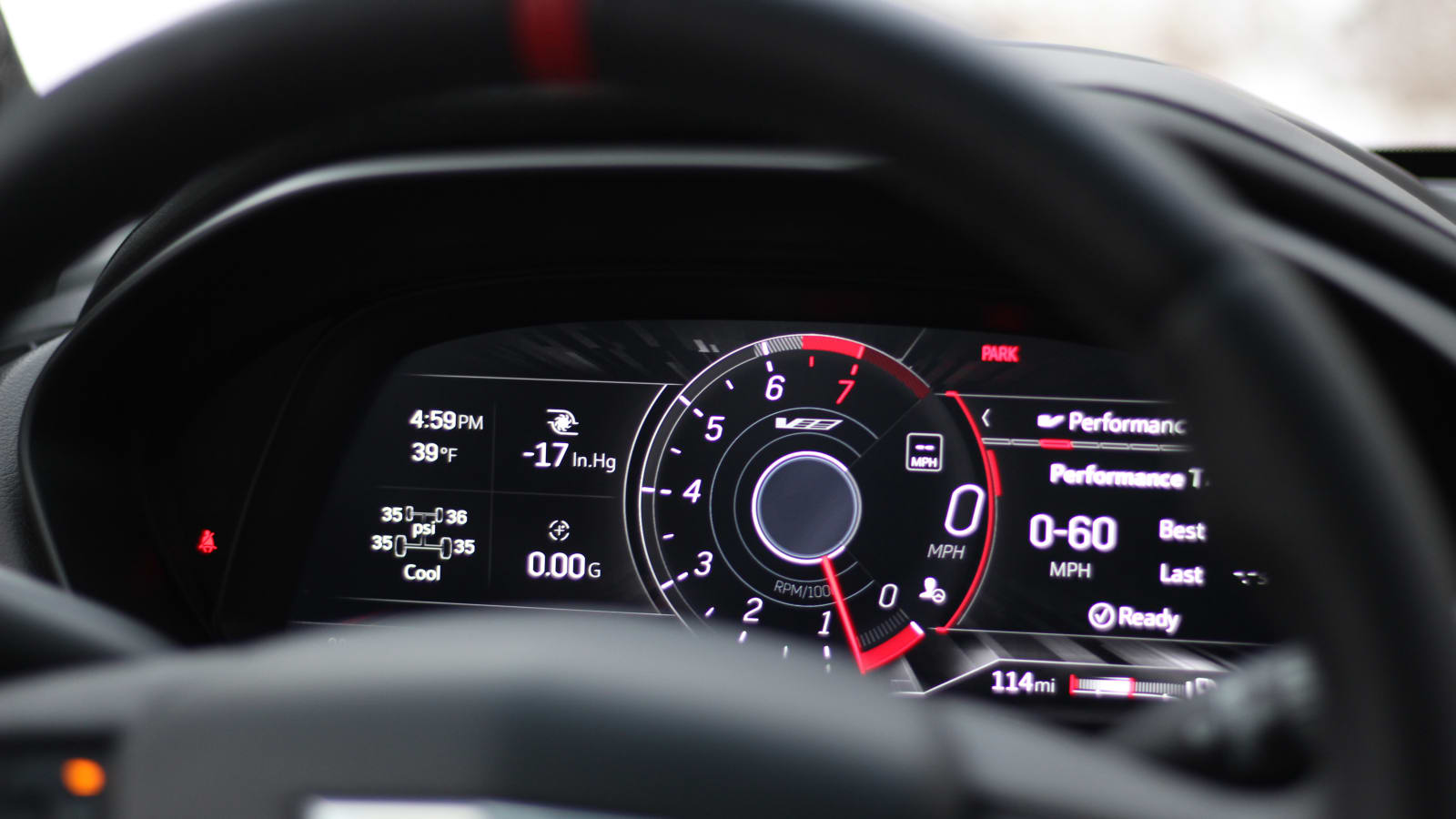 The CT4-V Blackwing’s allure begins right when you slip into the heavily-bolstered highly-designed sport seats to find yourself in a luxurious but highly-functional interior. Cadillac has long taken guff for subpar luxury interiors versus the Germans, but the CT4-V Blackwing comes closer to being a BMW M3’s or Audi RS5’s equal. The one misgiving is the relatively tiny infotainment touchscreen perched upon the dash. Its screen quality is worse than just its small size, and it’s not befitting of the interior’s upscale look. It’s also not consistent with the digital gauge cluster, which is of a higher quality and cycles through its various display modes with elegant fluidity.

That complaint aside, the rest of the interior is smartly designed with excellent ergonomics. The seating position is a touch higher than an M3 or M2, but it’s good for visibility and getting your body in line relative to the pedals and shifter. Push both the light clutch pedal and the stiff brake pedal in to start, and the V6 rumbles to life, shaking nearby glass if you start it in its loudest exhaust mode. The car remembers and retains what mode you shut it off in, so be sure to swap it into “Tour” for a quiet startup. Otherwise, let’er rip in full loud, and it’ll be just the right substitute for caffeine. 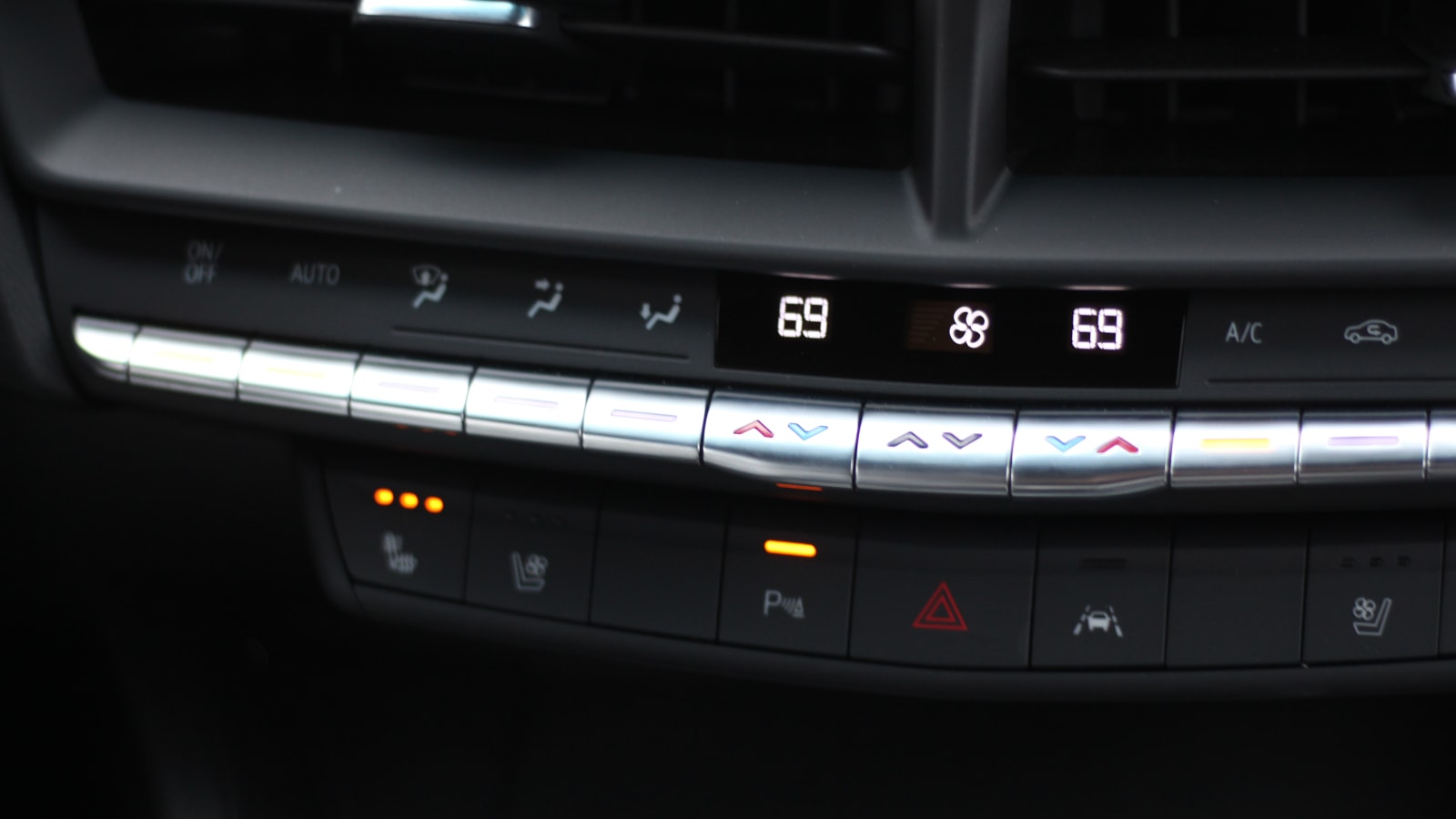 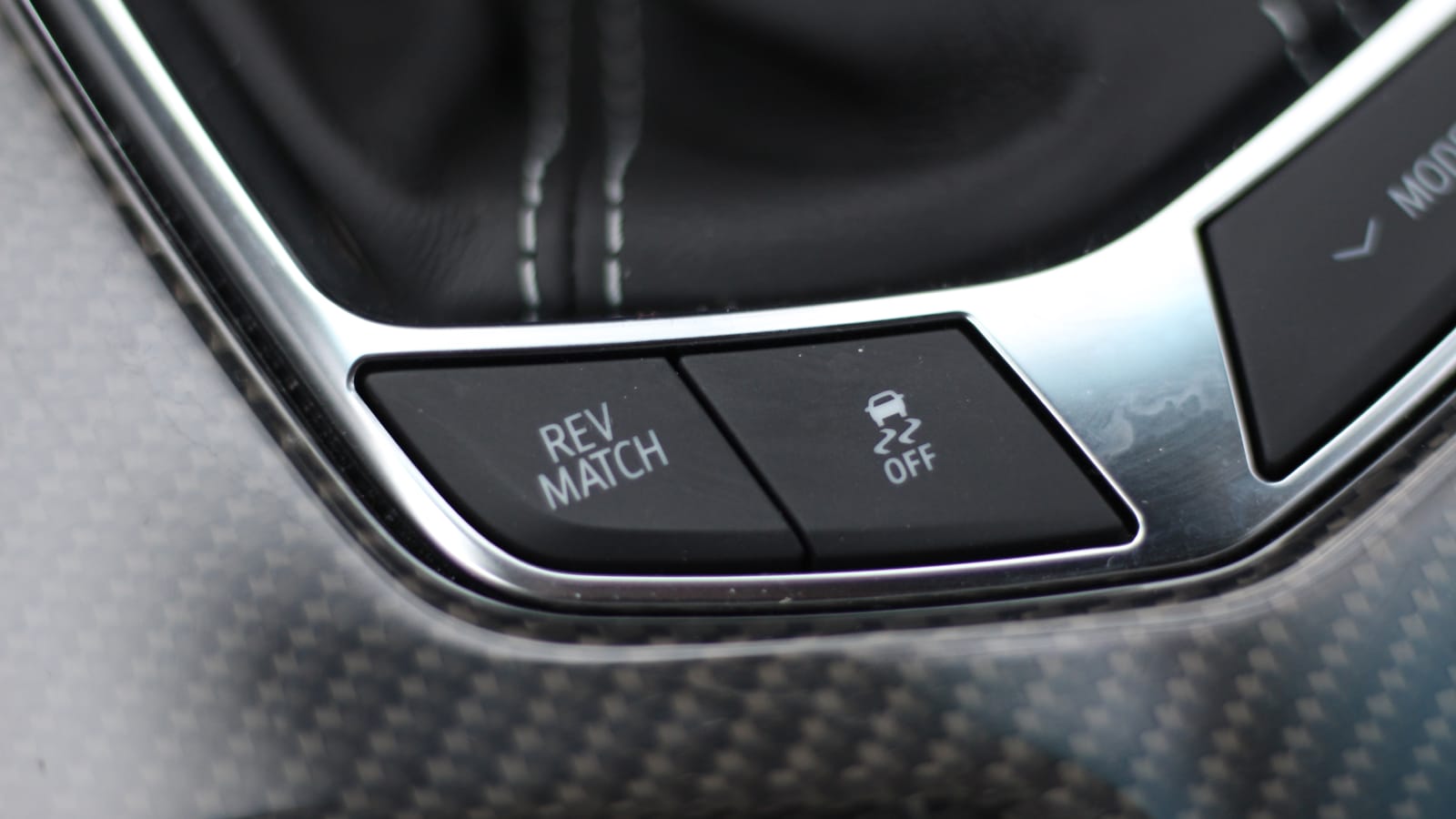 Unlike the horrendous-to-use ATS-V’s CUE center stack controls, the CT4 uses a simple and user-friendly row of buttons to operate its vital controls. Drive mode switching is done via a rather unceremonious toggle behind the gear lever, and the rev match feature is found next to it. GM’s implementation of its Performance Traction Management system is the best yet, too, but more on that a bit later.

These mechanical-related elements being organized so well makes focusing on the drive that much easier. There are no gimmicks or bizarre party tricks to be found. It’s just you and what has to be the best chassis in the sport sedan world these days. 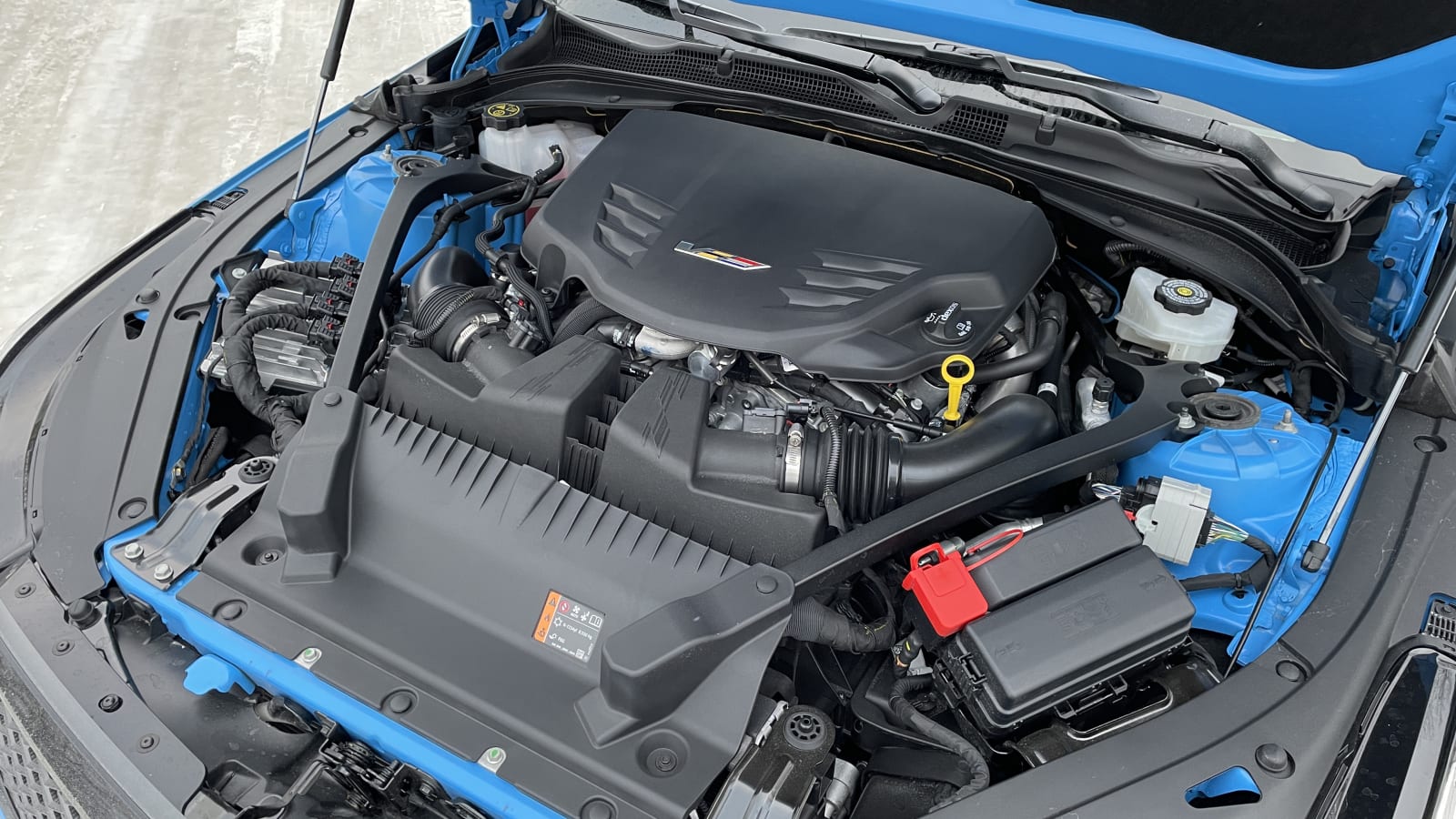 Before even arriving at the good roads, this CT4-V Blackwing is an engaging driver. The gear lever travels through its gates with a satisfying weight, providing positive feedback with each shift — the new M3/M4 shifter wishes it was this good. Let the computer handle rev matching when you’re just tootling around town, and the exhaust rewards with a bassy rumbling on the overrun with each downshift, provided you have the exhaust in its loud mode. There’s no waiting around for torque leaving a light or at any point when leaning into the throttle. The beefy 472 horsepower and 445 pound-feet of torque from the big 3.6-liter twin-turbo V6 is on tap and ready to be fully or partially unleashed at a moment’s notice. Fuel economy might be abysmal — I averaged 14.6 mpg after 500 miles of driving — but there is never a dull moment.

The seemingly magical Magnetic Ride Control suspension is the cherry on top for daily driving use. Despite being a track-ready high-performance sport sedan, the ride is plush and forgiving in full soft mode. It’s refreshing to drive a car that can be as capable as it is on track, but also have it realize that it still needs to be driven on America’s crumbling roads. The largest available wheels are only 18 inches in diameter, so the ample sidewall is likely helping out here. 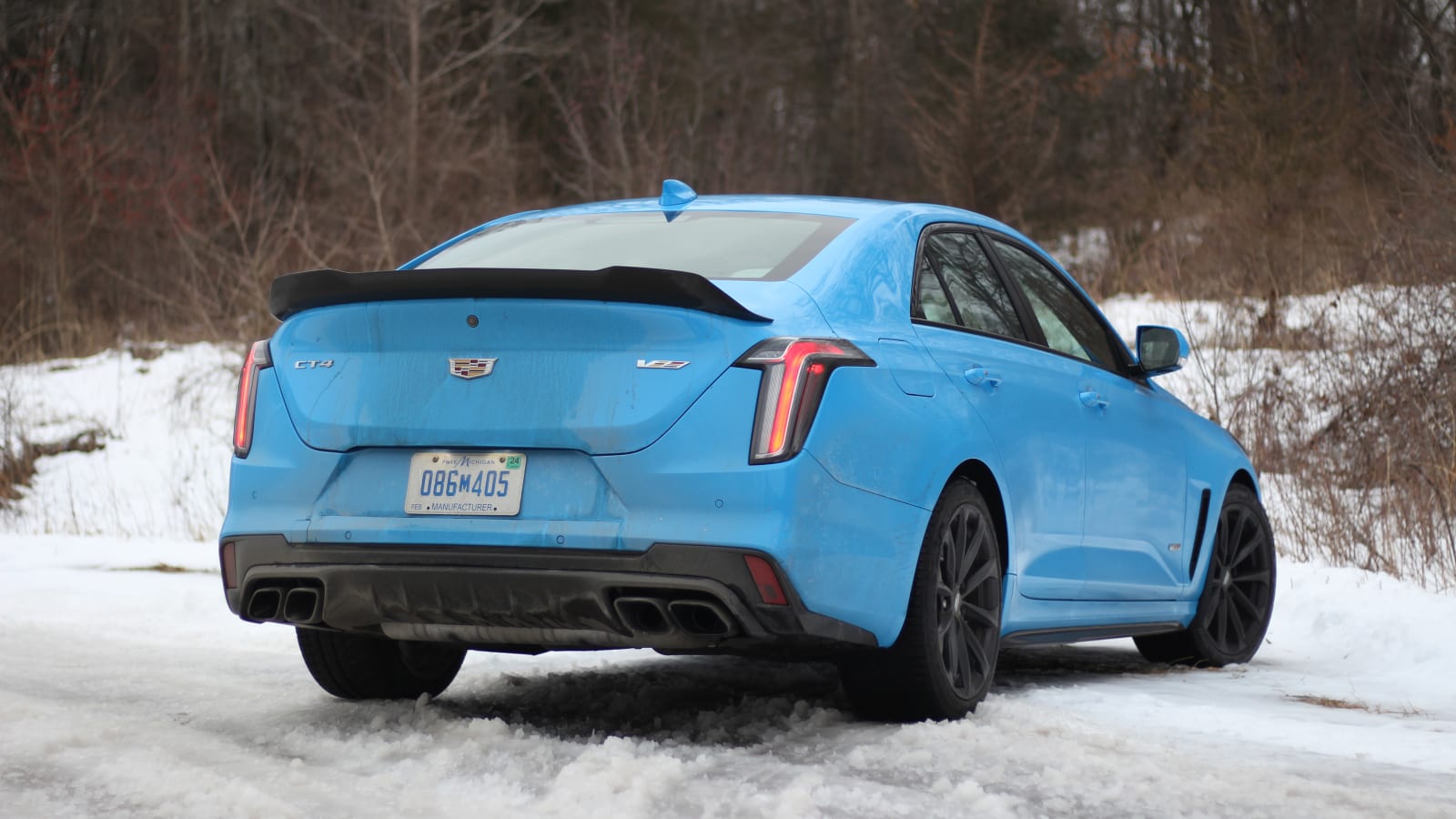 The docile and friendly sedan quickly turns into a monster when you want it to, but even in full attack, the CT4-V Blackwing makes driving easy. Since it’s winter here in Michigan, all the roads are covered in either melting snow water or a thick layer of slick salt. Neither are conducive to rear-wheel-drive cars with nearly 500 horsepower. That said, GM’s Performance Traction Management (PTM) makes driving easier in these conditions.

Toggling over to PTM Wet Mode lets the car know what surface it’s on, and after only a few corners, it’s clear that this traction control is one of the most predictable and helpful to use systems on a sopping-wet road. It’s smart enough to reel you in right at the limit of where the rear end would start sliding out, no matter how ham-fisted you are, then it gradually allows more power to the rear wheels as you straighten the wheel out. Corner after corner, it’s ensuring both the safest and speediest acceleration out, and it’s doing so in conditions that you might assume would turn this car into a terrifying mess. Swap it to PTM Dry in the salt-covered areas of the road, and the CT4 feeds more power earlier to the rear wheels. It dances around with a little uncertainty on occasion, but the added freedom is more fun, even if it’s a little dicey at times, requiring more of a feather foot than a heavy one. 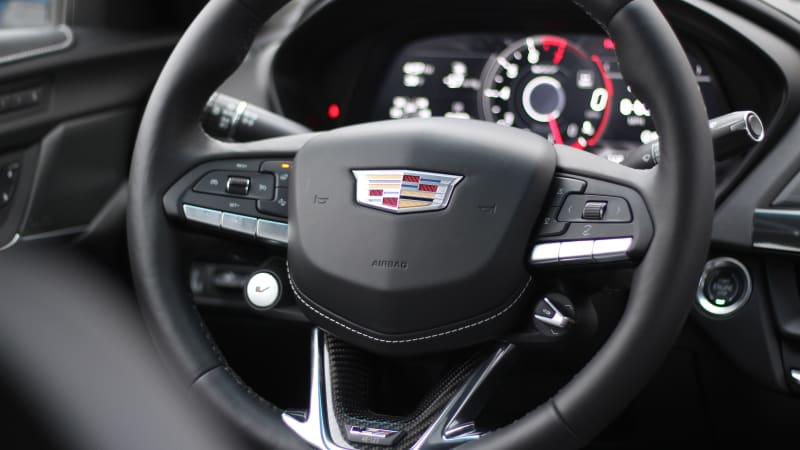 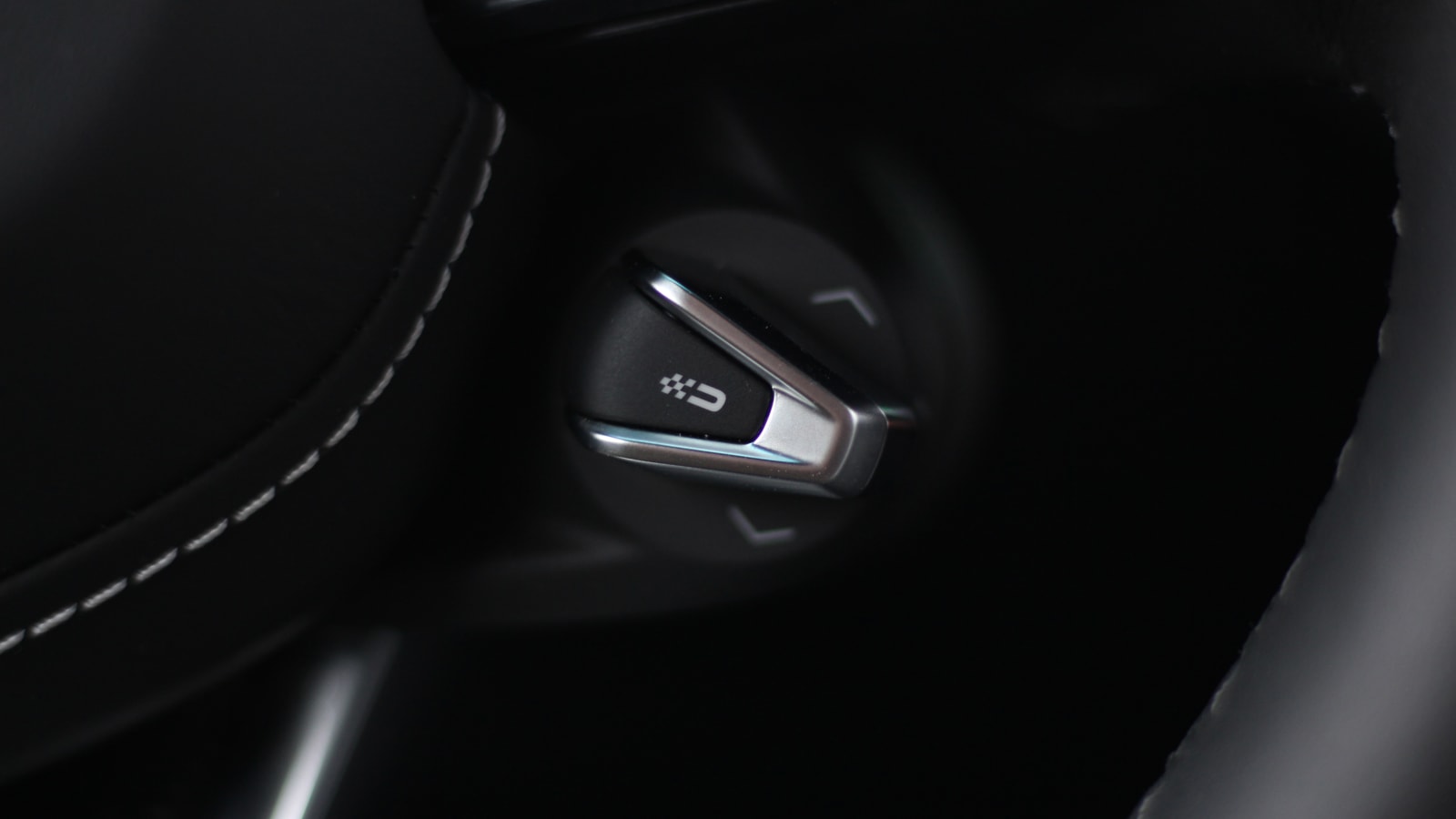 Perhaps even more key to the experience with PTM is the newfound ease of use. Instead of being hidden behind a number of drive mode and traction control button presses, PTM is just a toggle away on the steering wheel. This should drastically increase the system’s use, which is great, because owners should absolutely be taking advantage of it.

None of the above would be worthwhile if the chassis and other surrounding factors weren’t sublime, so thankfully, they are. This Cadillac’s steering is weighted perfectly in its heaviest setting — it telegraphs exactly what I’d expect from its wide tires. And then there are the brakes! Cadillac killed it with a super-stiff brake pedal that inspires confidence in hauling this sedan to a stop, but is also easy to modulate in traffic when you don’t want heavy braking force. One complaint: The 3,860-pound curb weight is relatively light for today’s standards, but the Blackwing doesn’t hide it as well as the BMW M3 does when you’re diving into and transitioning between corners. 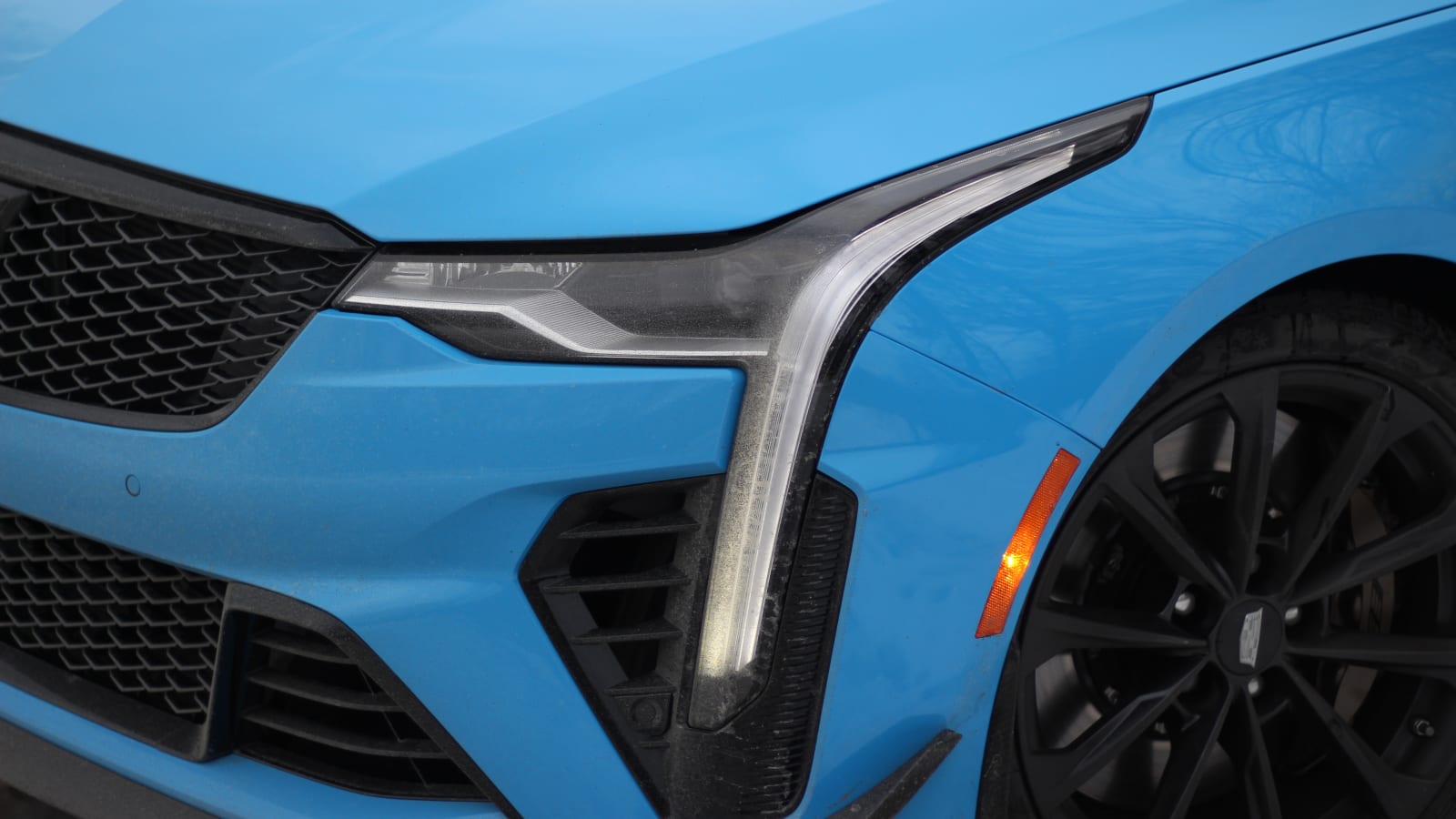 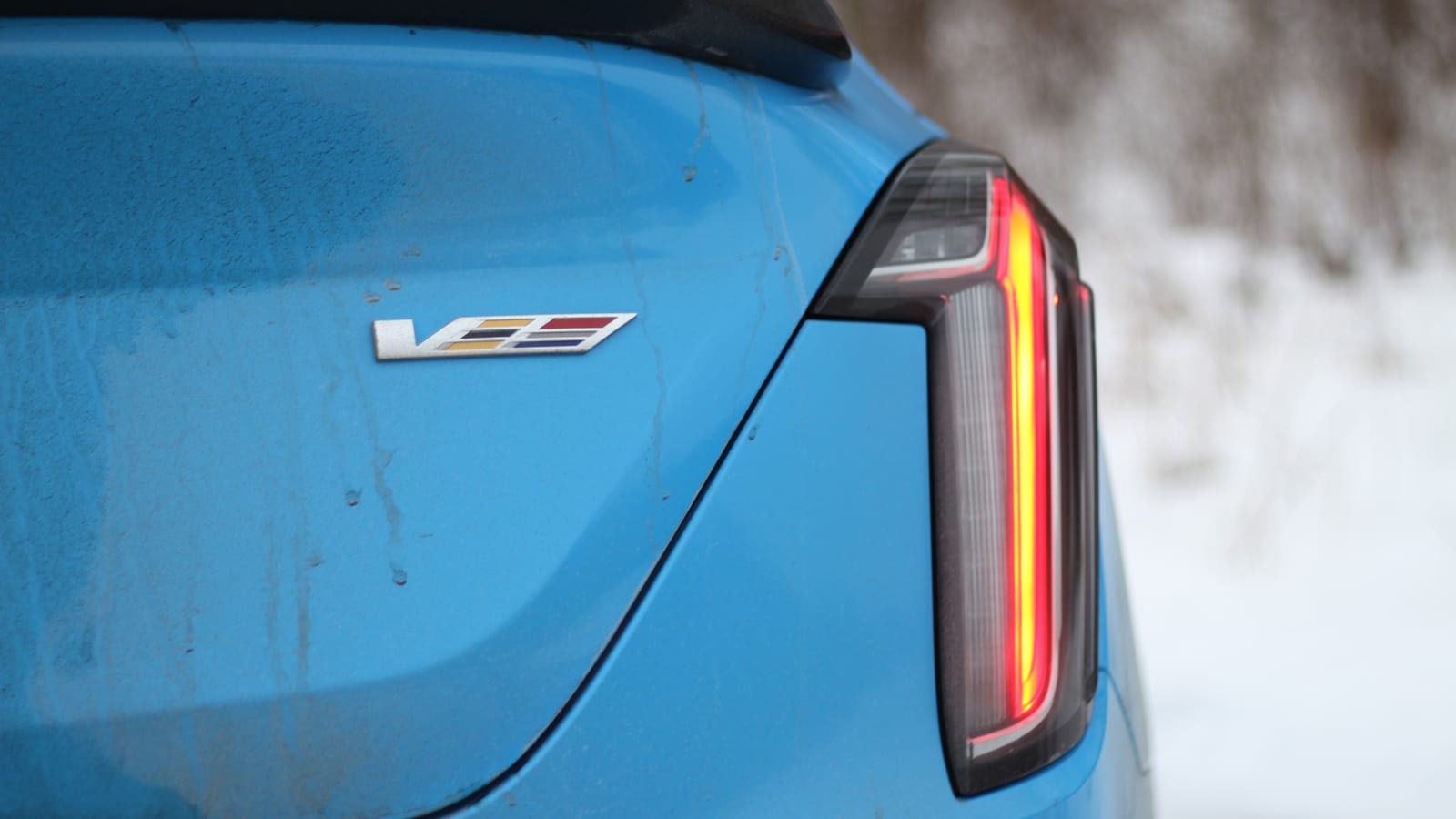 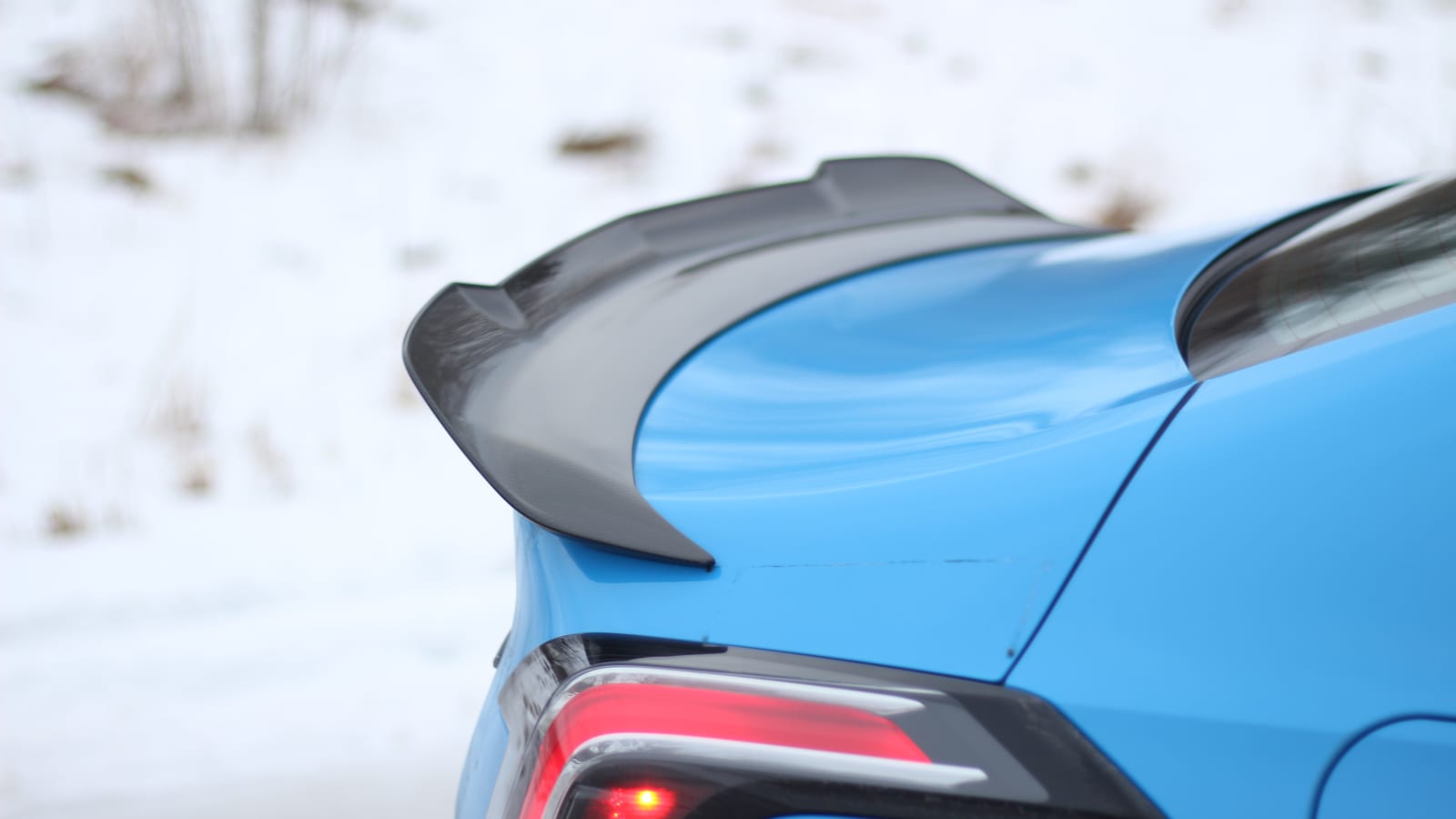 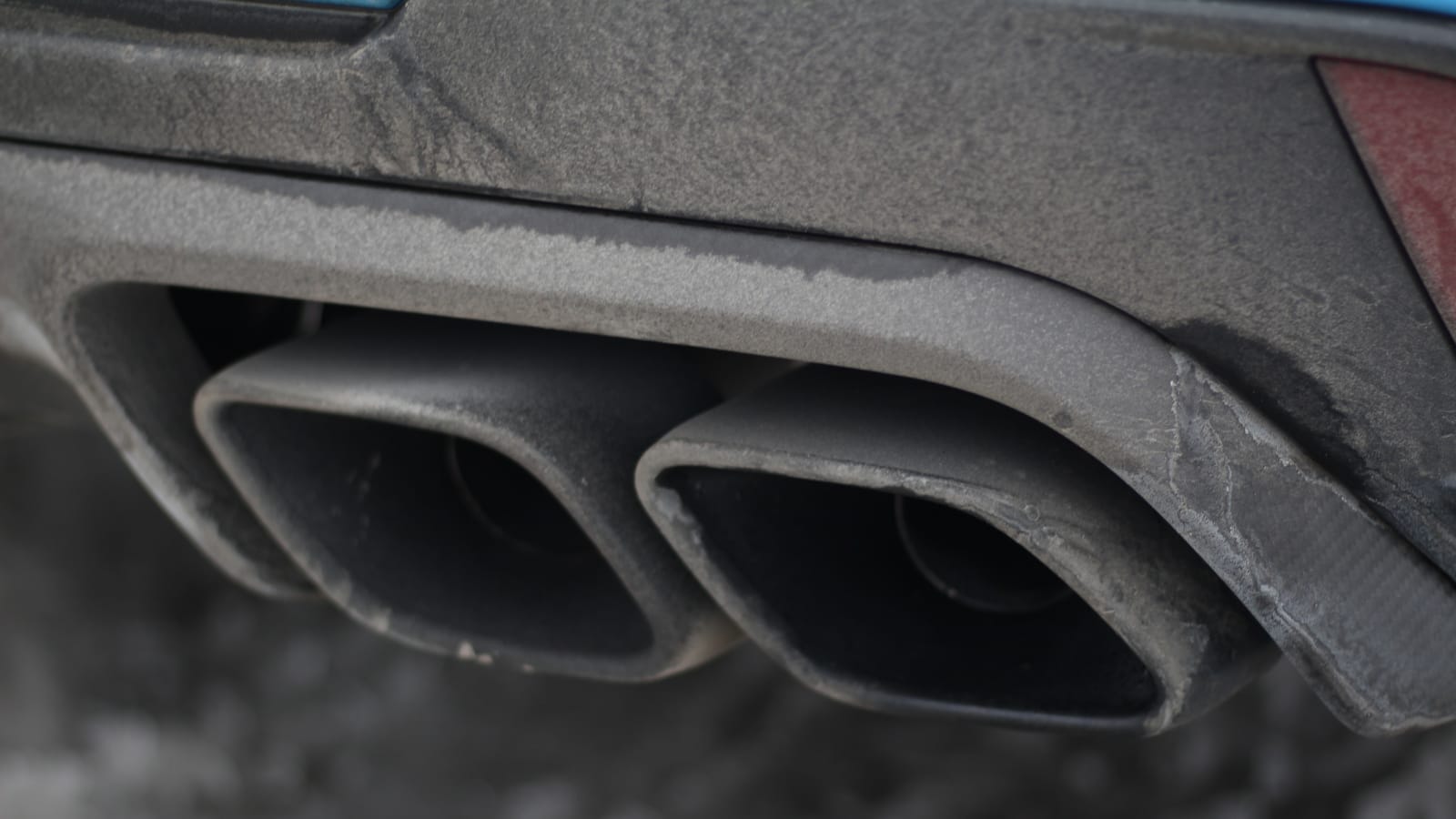 And while this engine isn’t short of motive force in the least bit, it’s not the most emotive powertrain available in this class. BMW’s inline-six revs higher and harder, and it sounds substantially better than the Caddy, too. But don’t get me wrong. The sound at this car’s 6,400 rpm redline is music to a car enthusiast’s ears, and the theatrical firecracker effect on the overrun at high rpm is hilarious fun. It’s a seriously gnarly V6, but that doesn’t change the fact that more entertaining engines exist.

No other sedan in this segment is a more satisfying performance machine than the CT4-V Blackwing, though. It combines all the elements — outside of snow driving — that are sure to make enthusiasts happy, and it does it in a package with nearly zero downsides. Even the price is amicable, as it starts at $59,990. That’s more in line with BMW M2 pricing than it is M3 pricing, and you get an extra set of doors over the M2. After options, my test car totaled $77,035, and I’d delete $4,350 of that total without a second thought to drop the unnecessary carbon fiber exterior trim bits. The rest are necessary to up the interior’s ambiance to a proper luxury car level, as it’s legitimately competitive with the Germans when you give it the epic tri-color sport seats, red seat belts and extra tech packages.

Our Associate Editor, Byron Hurd, loved driving the CT4-V Blackwing so much at the First Drive that he went out and bought one, and I thoroughly applaud said purchase. This is a Cadillac to remember for the ages, and anybody who pulls the trigger is in for a delightful driving treat.