The 2022 Acura MDX is Acura’s latest, completely redesigned model in what’s shaping up to be a rekindling of the Japanese luxury brand. Acura smacked us across the face (in a good way) with the luxurious and sporty TLX last year, and now it’s trying to do the same with its three-row family crossover.

2020 saw the MDX become Acura’s best-selling model of all time, surpassing 1 million total sales. Granted, it’s been around since the turn of the century, but there’s no underselling how important the MDX is to Acura. Enthusiasts like ourselves are far more intrigued by the performance cars, but the MDX is where Acura is printing its money. However, its cash cow status hasn’t restrained Acura from transforming the new MDX into a crossover that’s likeable to both enthusiasts and the public at large. That’s the Acura we remember and love.

The 2022 MDX rewrites its story with a new “light truck” platform that’s exclusive to Acura … for the time being. When we asked what this platform’s future might be, an Acura spokesperson told us that “this platform will underpin other models in our company portfolio, but we’re not speaking to that at this time.” Most likely, Acura is referring to the next-generation Pilot (along with the Passport and Ridgeline), considering that every previous MDX has been related to Honda’s three-row crossover.

For now, however, this new platform facilitates the MDX’s longer dash-to-axle ratio (4 inches greater than before), which gives it proportions similar to rear-drive-based competition from Europe and elsewhere. It also results in greater cabin space, better handling and new technologies, but we need to address the design first.

The transformation is substantial, as the 2022 MDX is both wider and longer than its predecessor. Where there was slop and slouch before, there is none today. Its upright face, mesmerizing grille, big wheels and sharp lighting elements make the MDX stand out in the crossover crowd. This redesign takes the MDX from being one of the least fetching options in the segment to standing tall as one of the most stylish. Big styling wins haven’t always been easy for Acura to come by over the last 10-plus years, but chalk this one up as another feather in the cap following the dashing new TLX.

The new MDX platform contributed to these good looks, but it also brings a splash of utility. The third row sees the biggest gains, as adults or teens are far more likely to fit comfortably in the way back. Acura added 2.4 inches of legroom and found a touch more headroom despite raising the seat bottom by 2 inches. Cargo space in all seating configurations also goes up by minor amounts. Acura says that this extra space was opened up by switching from a coilover to a separate strut and spring rear suspension design.

The MDX may no longer be mechanically related to Honda’s Odyssey, but its novel second-row seats do borrow a page from Honda’s minivan playbook. You can sit three-across (seven-person maximum capacity), fold the center seat down for a massive center console, or completely remove the middle seat to leave yourself with a pair of quasi captain’s chairs. Every other competitor makes you choose whether you want a three-person bench or two-person captain’s chairs at the dealership. 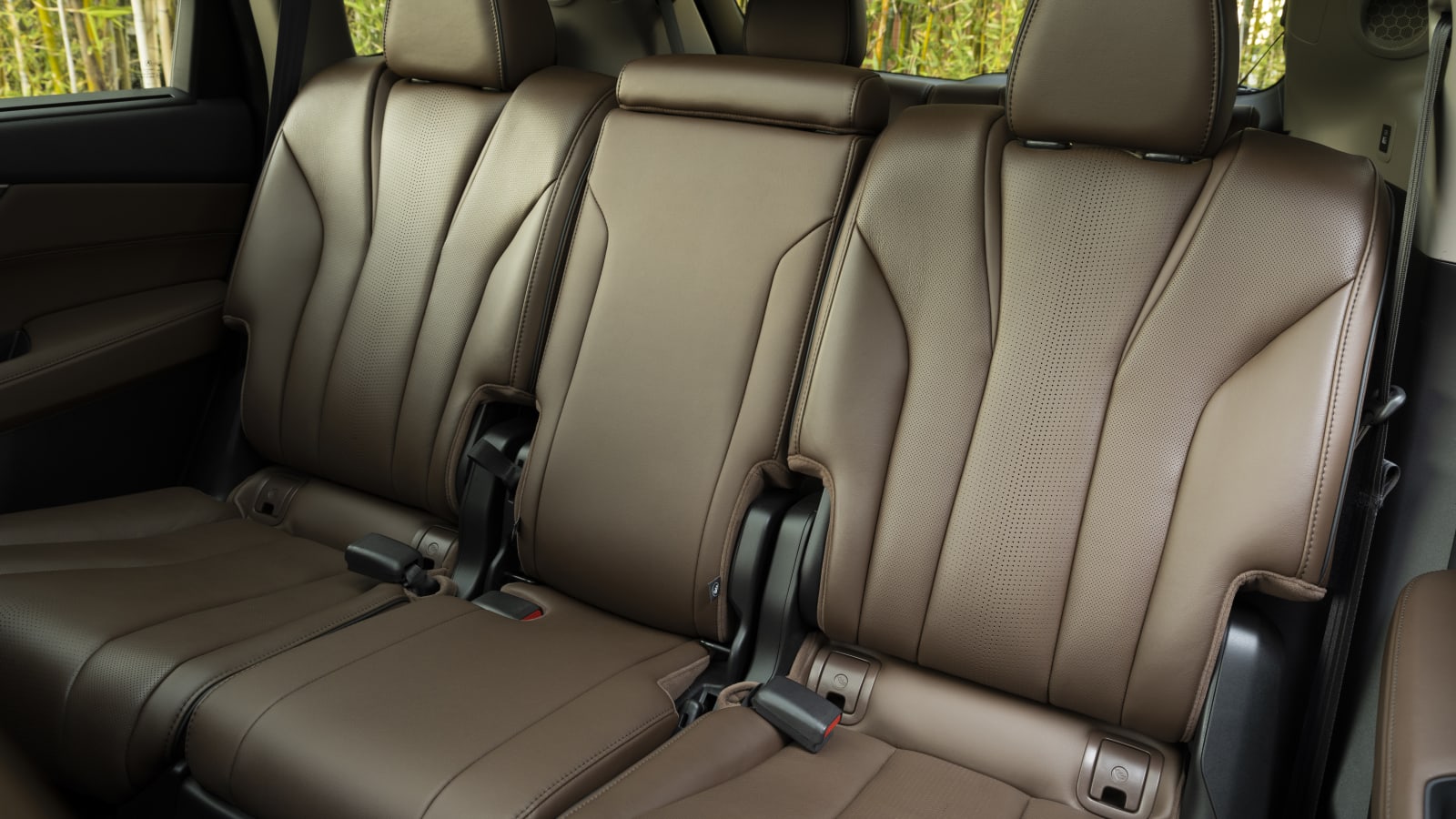 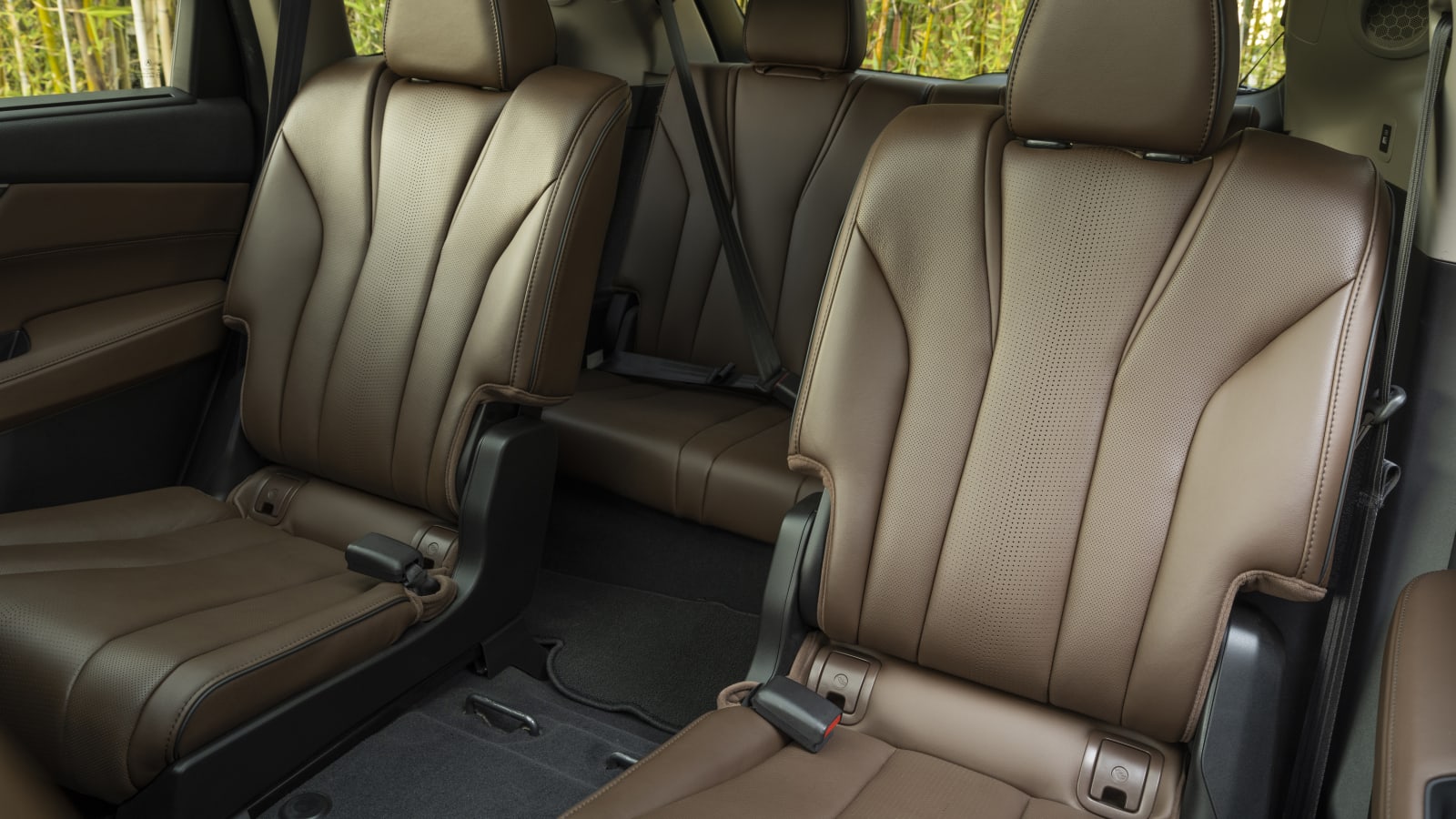 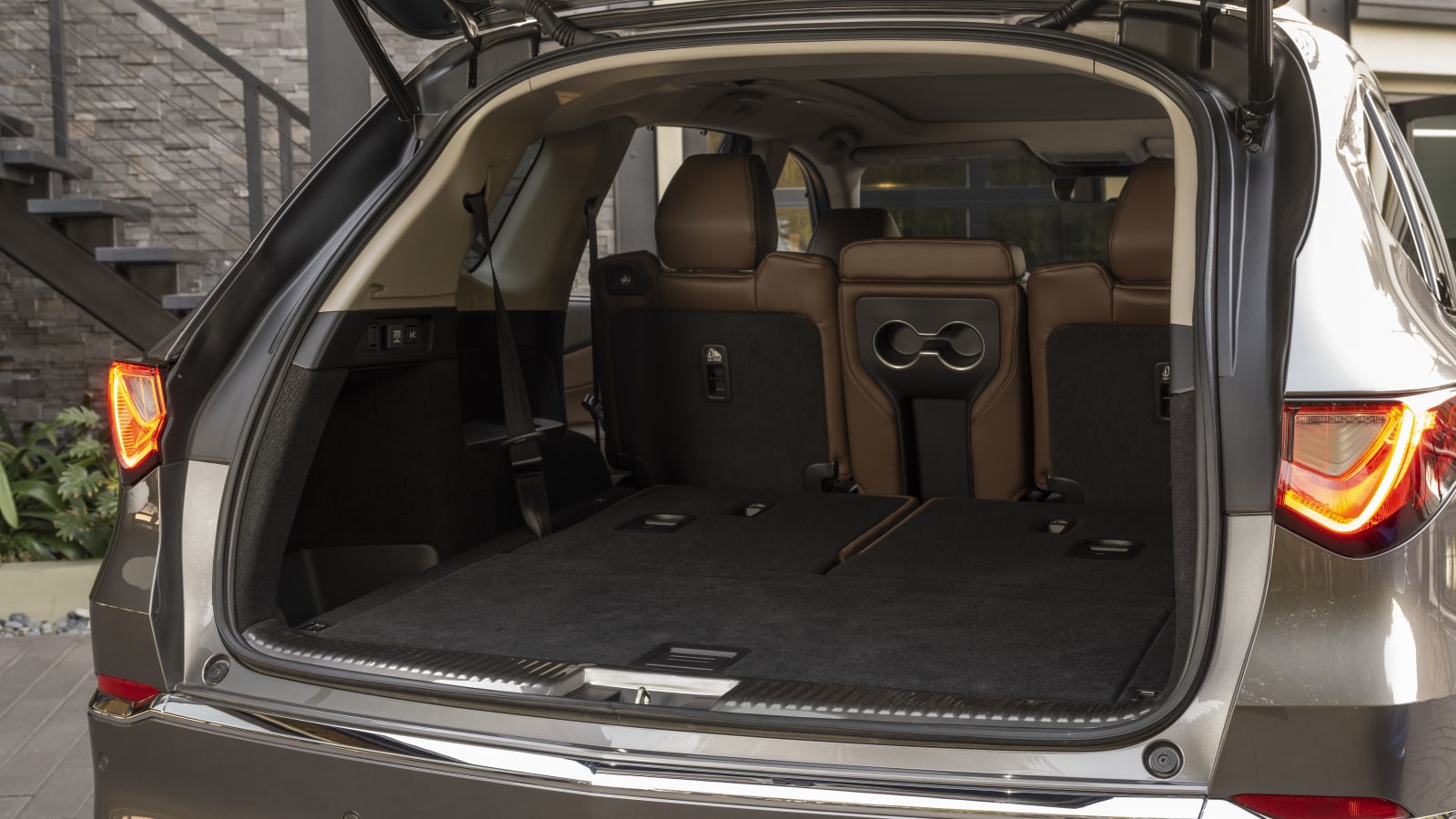 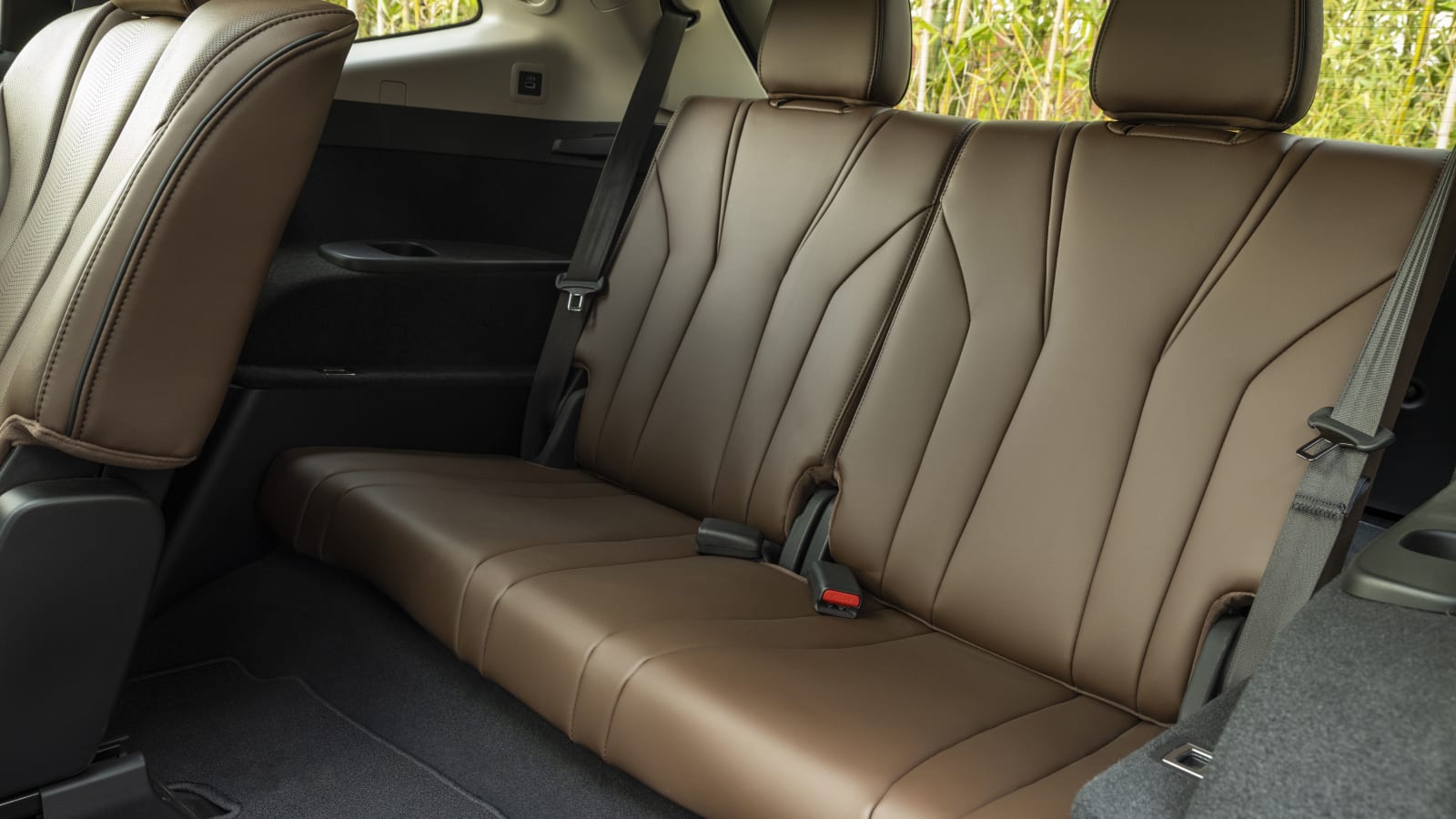 So yes, the MDX is a better crossover for the family, but even more impressive is what it brings to the table for the driver. Acura is not deviating from what’s worked in the past with the base engine. It’s still the 3.5-liter naturally aspirated V6 that makes 290 horsepower and 267 pound-feet of torque — no 2.0-liter turbo to be found here. The transmission is new, though, and it makes a substantial difference in how this MDX drives. Acura went from a nine-speed automatic to a new 10-speed automatic, and it implemented a lower first gear for better performance. That gives this 4,500-pound crossover (with SH-AWD) far better pull off the line and at low speeds than we were expecting. It requires a lot of shifting to get the job done (you’re at the top of third gear by 60 mph), but Acura successfully used gearing to make the MDX feel more potent than the numbers suggest it would be. Plus, it’s above average when you toss it into manual shifting mode, responding eagerly to inputs from the nicely shaped paddles.

An MDX Type S with the 3.0-liter turbocharged V6 (355 horsepower and 354 pound-feet of torque) is coming in the summer, so if you desire more power, we suggest waiting. Acura also left the door open for a return to hybrid power in this generation of MDX, but we don’t know any details about it or when it might be coming.

Our biggest disappointment concerning the powertrain is the total lack of fuel economy improvement. It’s actually down 1 mpg in the combined rating for both front- and all-wheel drive layouts. Acura blames the car’s new styling for this loss in efficiency. Engineers tried their best to claw MPGs back through greater use of aluminum for body parts and newly integrated active grille shutters (reduces aerodynamic drag), but it still wasn’t enough to stay neutral from one generation to the next. 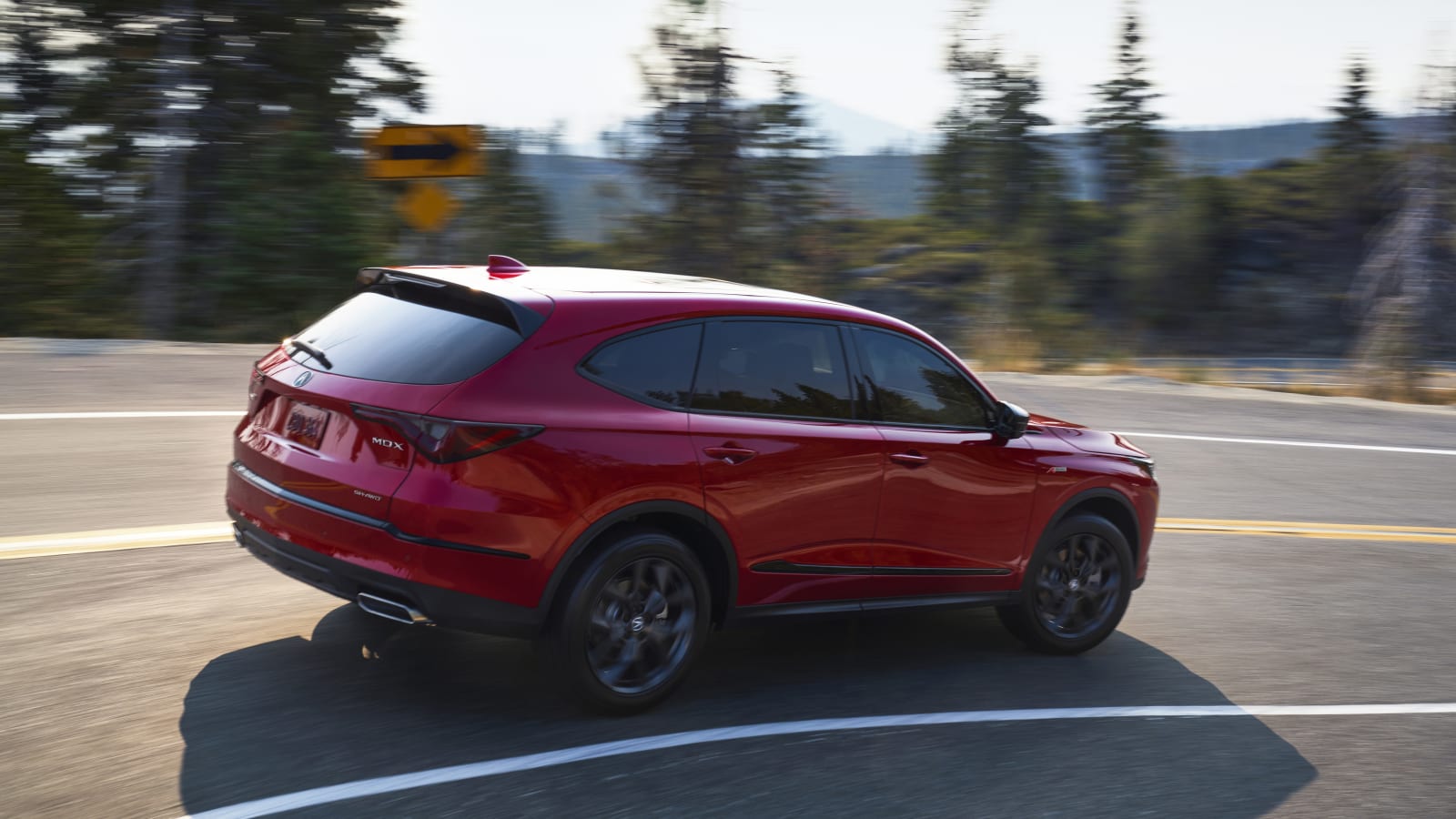 Where the MDX’s drive shines brightest is when you start to push it on a twisty road. That new platform it’s riding on is substantially stiffer than before. Plus, Acura is plunging headfirst into implementing independent double wishbone suspension design on its cars (most recently used in the new TLX). In the MDX’s case (and other cars), it improves ride quality and provides a larger and more consistent tire contact patch in corners. The structural changes contribute to a greater sense of nimbleness and stability to the chassis you wouldn’t expect in a vehicle its size. Hauling a three-row crossover through winding, hilly roads can be tiring, or just plain awkward and uncomfortable. In the MDX, it’s genuinely fun going back and forth. The confidence it instills in you to keep trying to extract more in corners and push harder is not the norm for this segment.

The only way to get the MDX feeling out of sorts is in 90-degree corners or especially tight roundabouts where weight becomes the dominant factor. Less abrupt curves highlight and play to the MDX’s strength. Acura’s SH-AWD has been bloody brilliant in every MDX since being introduced for the second generation, and this latest version once again brings its torque-vectoring magic. Up to 70% of torque can be sent to the rear wheels, and up to 100% of that available torque can be apportioned to either rear wheel. You can physically feel this torque vectoring at work as you feed in more and more throttle through corners. Every Acura with SH-AWD handles far better for it, and the MDX is no exception — it’s well worth the $2,000 upgrade over a front-drive model, even if you live somewhere that doesn’t experience winter weather. 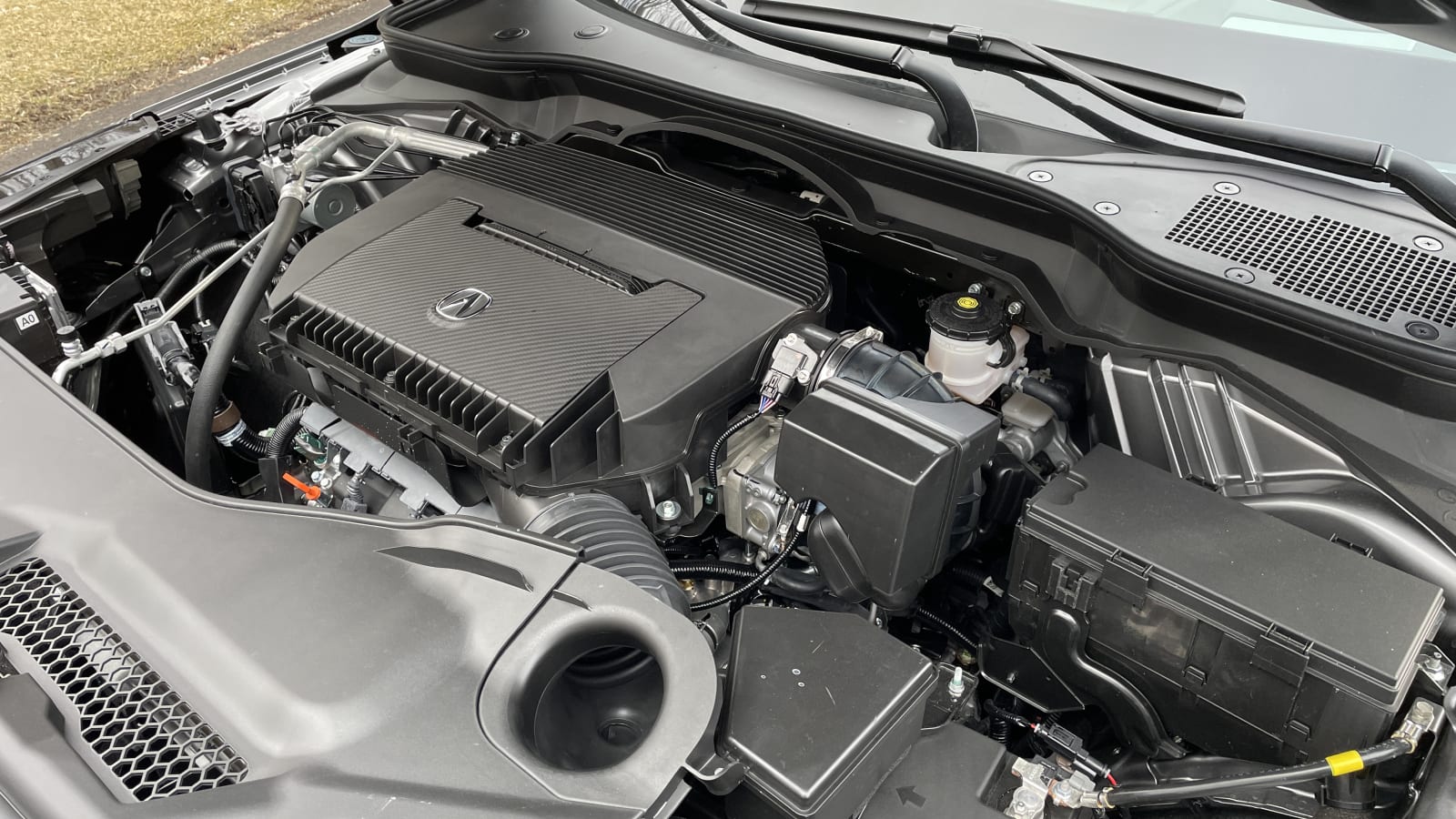 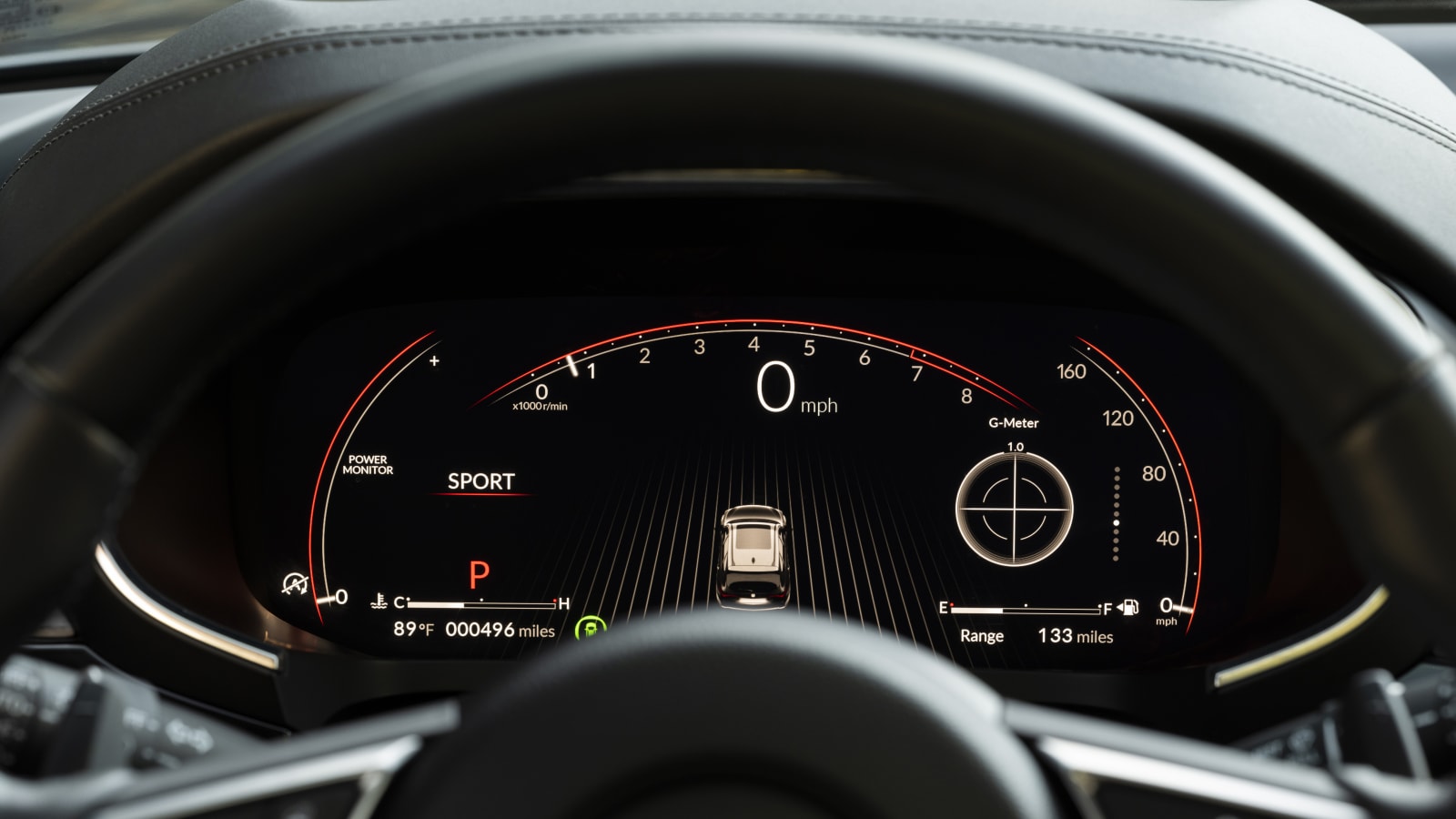 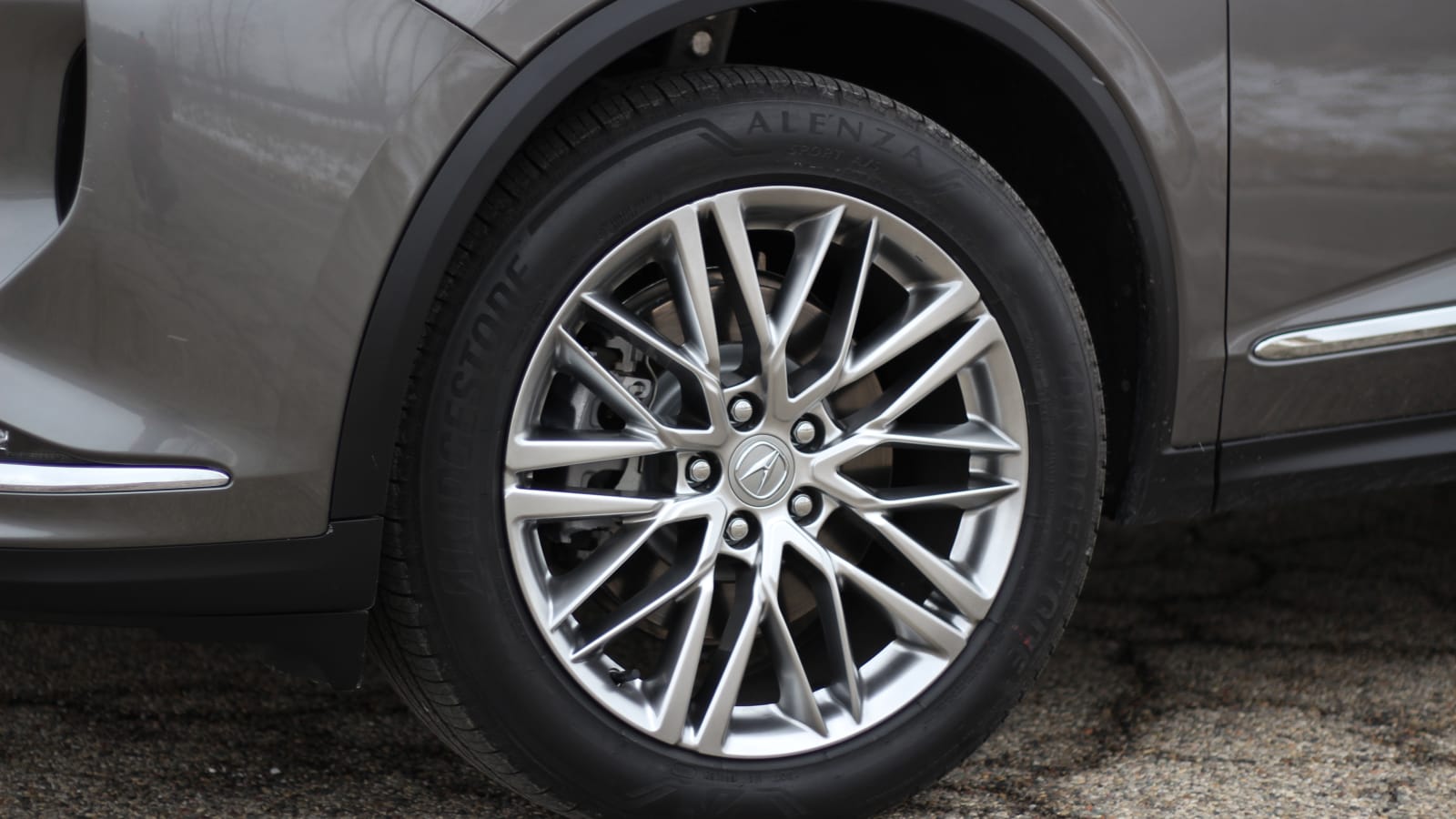 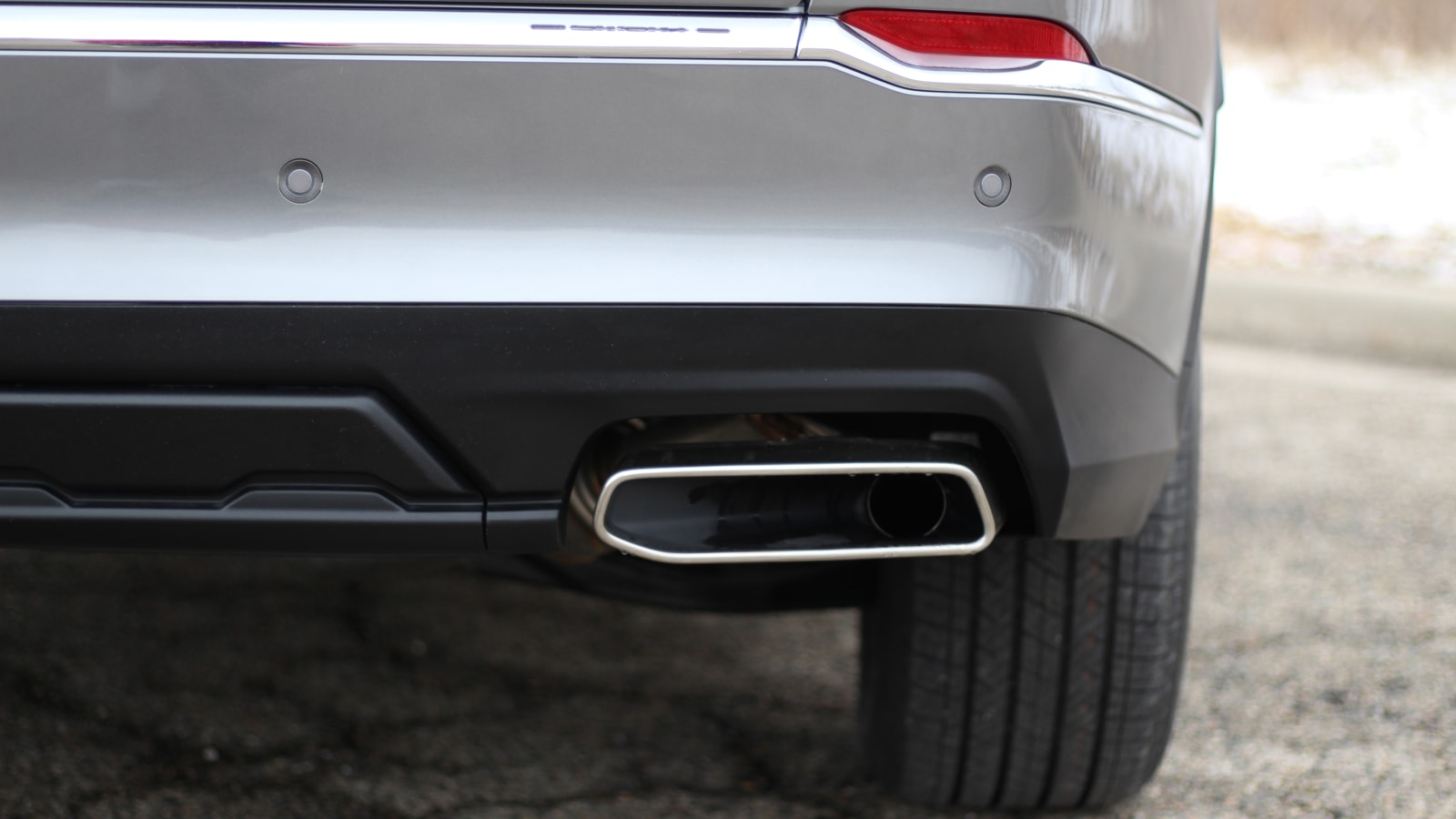 Adaptive dampers are not available like they are in the RDX and TLX, but the fixed dampers are dialed in nicely. Switching the NSX-inspired mode dial into Sport improves the variable-ratio steering with a little more weight (not too much) and directs more power to the rear wheels. Overall, the handling is on par or better than most of the competition, which isn’t an easy feat considering crossovers like the Audi Q7, Cadillac XT6 and Lincoln Aviator are all potential alternatives. Keep in mind, we haven’t even driven the Type S yet.

Thankfully, Acura hasn’t neglected ride quality and usability in the name of performance. The MDX soaks up poor city streets and bad roads with the best of them. It’s remarkably comfortable to just peaceably cruise around in. That V6 is unobtrusive until you step on it, and only then it makes the typically-satisfying Honda growl. There’s a modicum of wind noise that intrudes at highway speeds, but the cabin is generally serene.

We’re left with one big nit to pick about how the MDX drives: the brakes. It’s a new brake-by-wire system with an electric brake booster. Acura nailed the tuning with the TLX’s similar system — it has a stiff pedal that’s sports car-like in feel. In the MDX, they have the vague, mushy feeling of an old hybrid’s poorly tuned regenerative brakes. There has to be some middle ground that would be appropriate for a crossover but still in keeping with the performance-car spirit Acura is going for.

That spirit is at least seen inside where Acura’s latest, NSX-inspired interior design stands in stark contrast to the outgoing MDX, which was never cutting edge in terms of design or luxury.

The new cabin clearly clearly shares visual DNA with the RDX and TLX designs, but it’s a more expansive, elevated take that skews more towards luxury than sport. Materials quality also sees a significant jump upmarket. Sure, a Mercedes-Benz, BMW or Audi will still outclass the MDX, but Acura isn’t very far behind anymore, and all the German competitors are significantly more expensive.

Acura promises that if you see a material that looks like wood or metal, it’s genuine. Fancy LED ambient lighting can be customized with tons of different themes. The seats are both pretty (nice piping and patterns in the leather) and comfortable. Its 12.3-inch infotainment system is loaded with features, and the available ELS Studio audio system will bump with the best of them. The MDX also marks Acura’s first application of a fully digital instrument cluster, and it’s a good one. You can choose between a couple base layouts for the 12.3-inch screen, but those can be changed/customized even further via the drive mode dial — each mode has its own layout. One of the two Sport mode layouts is reminiscent of the S2000 with its horizontal tachometer arcing across the top of the screen in the same fashion as Honda’s iconic sports car.

When the Type S eventually drops this summer, the new MDX lineup will be a formidable force. Pricing for the standard MDX starts at $47,925 and ranges up to $61,675 for our top-of-the-line Advance. Those who want an MDX with a sportier look can go for an A-Spec (black trim, available red leather) at $58,125 — it comes with a majority of the optional luxury and tech niceties, which is why it’s nearly as expensive as the top trim. Unlike much of the higher priced competition, Acura comes standard with nearly all its driver assistance features, an impressive array that includes both full-speed adaptive cruise and lane-centering. It’s just one of the many items on the list that makes the MDX add up to a super capable family hauler that won’t break the bank, or your soul, from behind the wheel.