Though the full-size sedan class continues to shrink, Toyota is committed to bringing its best with the 2021 Toyota Avalon. Already one of the top choices after its redesign two years ago, the 2021 Avalon improves with even more variety. It adds all-wheel-drive as an option to a lineup that already includes V6, hybrid and high-performance TRD options. And regardless of the model, the Avalon will provide you with loads of space, a surprisingly engaging driving experience, plenty of comfort, and a cabin that can rival those of real luxury brands.

This level of competence isn’t likely needed in a segment that has only two real competitors left, the aging Chrysler 300 and Nissan Maxima, but it is highly welcome. And when ordered in a high trim level, it makes a strong case against larger entry-level luxury sedans like the mechanically related Lexus ES. 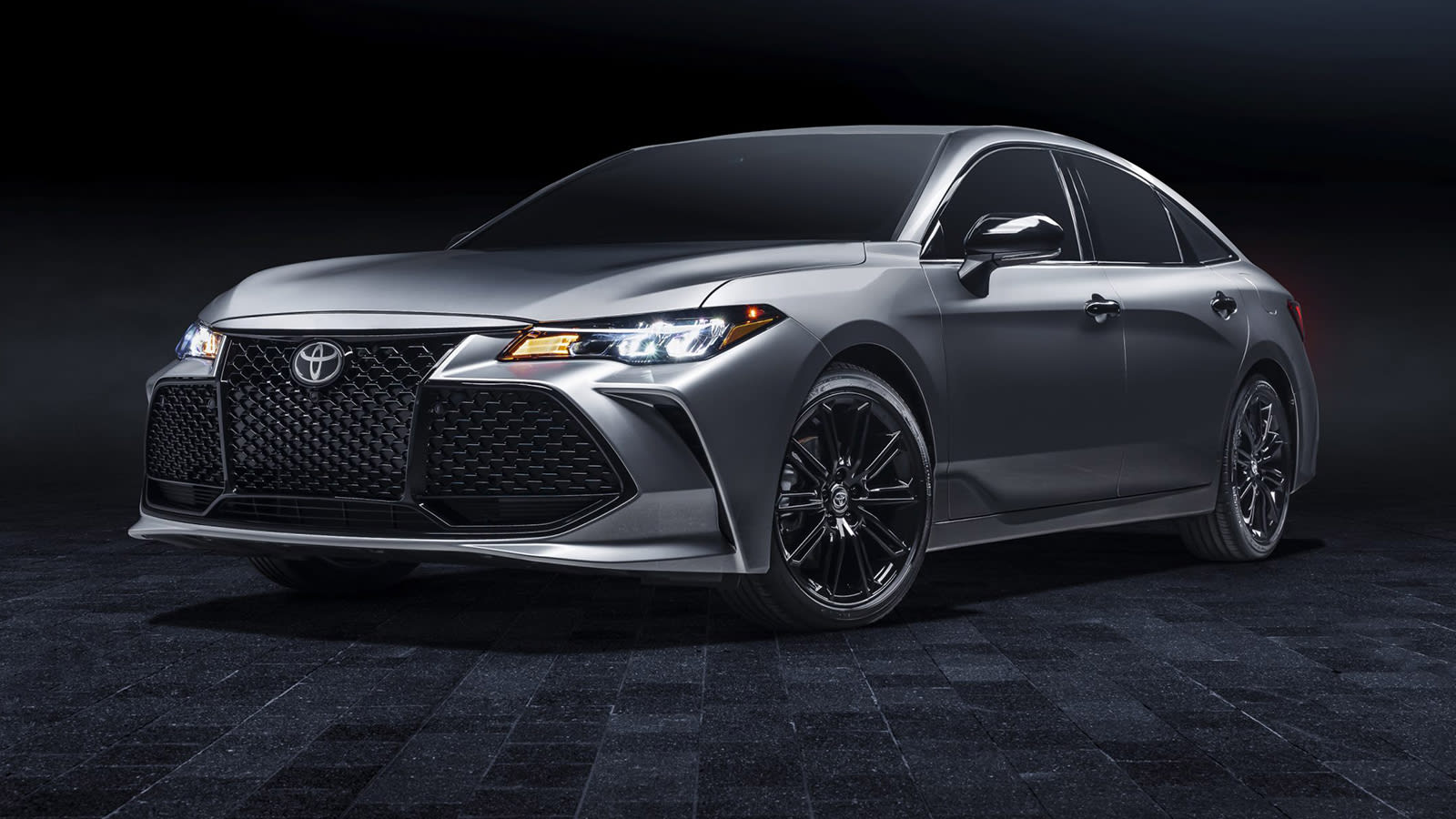 The 2021 Avalon gets a number of significant, if not earth-shattering changes over the previous year. The biggest is the addition of optional all-wheel-drive, which is exclusively paired to an also-new 205-horsepower naturally aspirated four-cylinder engine. Front-drive cars remain available with either a 301-horsepower V6 or 215-horsepower hybrid powertrain that gets a lighter lithium-ion battery pack for 2021. 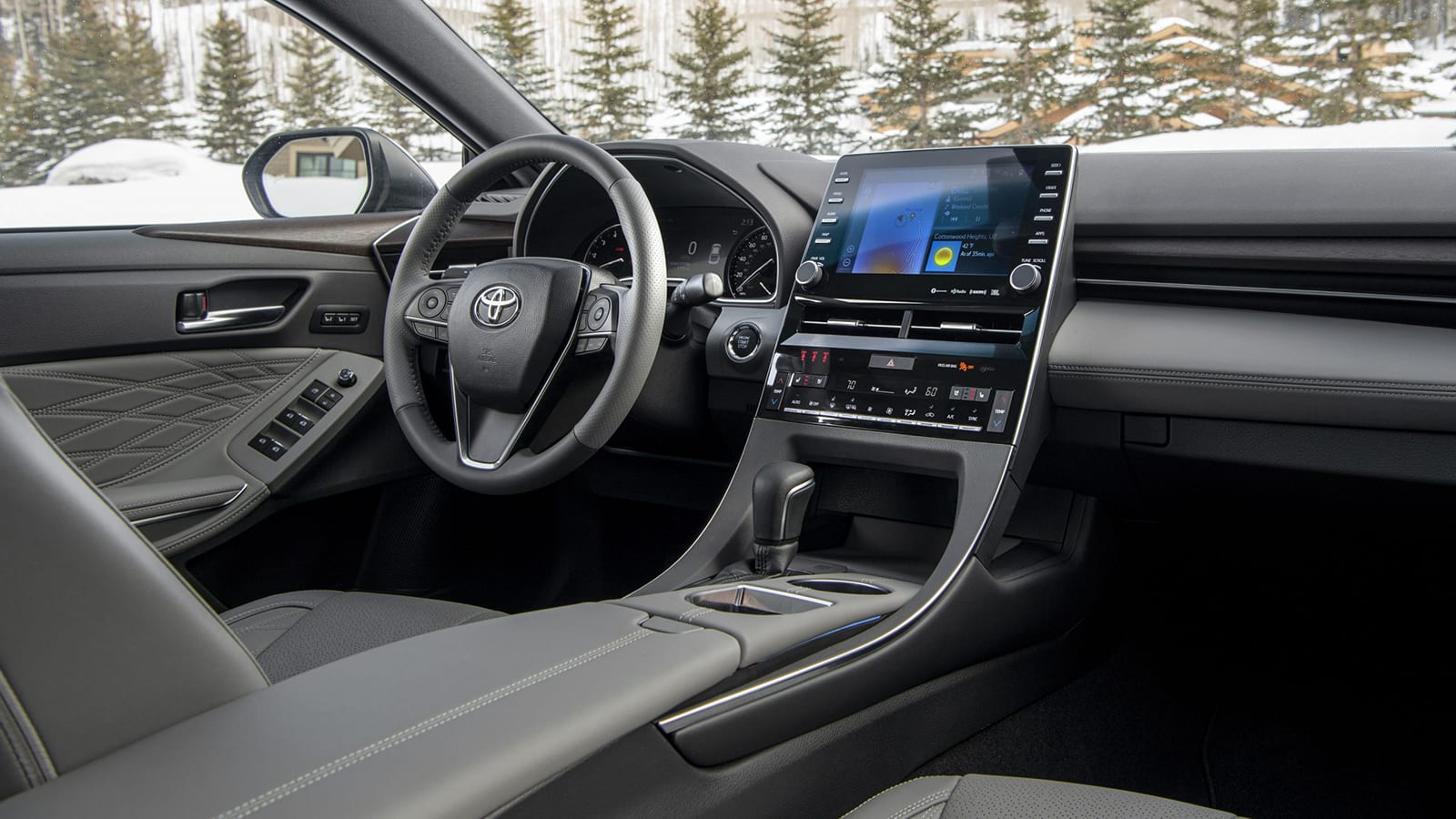 The Avalon’s full redesign for 2019 brought a higher-quality interior with a considerably different look than what you’ll find in a Camry. Together, this goes a long way in justifying the Avalon’s higher price. A tall, rectilinear center stack rises forth from the center console and seems to hover away from the rest of the dash like a free-standing tower. It’s kinda cool and avoids the tacked-on iPad look many dislike, while still benefiting from the reduced visual bulk and elevated sightline that design allows. The area behind it is architectural in appearance, neatly integrates the air vents, and showcases different materials. Most of the interior materials are high-grade plastics, but high trim models such as the Touring receive incredibly soft leather as well as real, open-pore wood trim. Equipped as such, the Avalon feels like a full-fledged luxury car. The TRD meanwhile looks quite sporty with its black and red interior. Unfortunately, the seats don’t receive any additional bolstering, so the extra cornering ability will have you bracing yourself to stay in place.

Wide, expansive seats are comfortable to sit on for long periods of time, and the driving position is perfect for eating up highway miles with ease. Visibility is fantastic with no major negatives to make note of. Heated and cooled seats are available depending on which trim you opt for, as is a heated steering wheel.

The aforementioned center tower itself features unique-to-Avalon switchgear that maintains Toyota’s long standing preference for keeping the climate control system separate from the infotainment (kudos). The latest Toyota Entune 3.0 system comes standard with a 9-inch touchscreen, WiFi, a selection of USB ports including two USB-C variants, satellite radio, Amazon Alexa integration, Apple CarPlay and Android Auto. Toyota still hasn’t hopped onboard the fully digital gauge cluster game with the Avalon, but it does have a generous 7-inch display that splits the gauge set. The Limited and Touring each get a 10-inch head-up display, too. 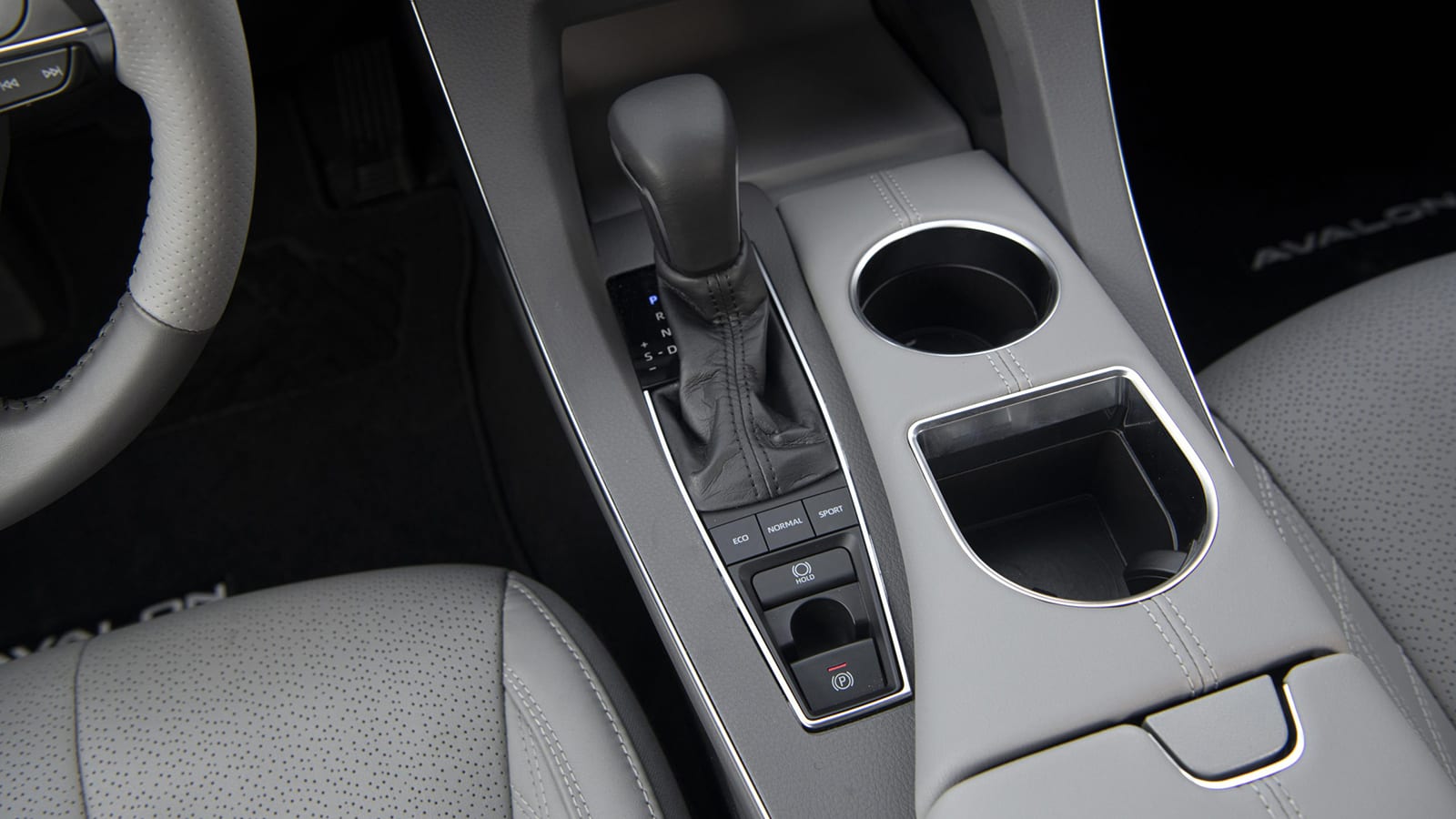 How big is the Avalon?

The 2021 Toyota Avalon is quite a large one, and that’s one of the reasons it succeeds. At 195.9 inches in length, it’s actually longer than the three-row Highlander. With the length comes an attractive, long hood and a true presence on the road. Passengers in back can spread out with 40.3 inches of legroom, and the trunk has a sizable 16 cu-ft of cargo space. That’s good for the segment, but there’s no denying that a crossover will be capable of providing more cargo space.

There’s just as much space for your stuff with the Avalon Hybrid, as the cargo volume figure sticks to 16 cu-ft. Past hybrid sedans always lost trunk space because of the battery pack. Good job, Toyota. The trunk shape is useful, too, making it easy to get larger suitcases and bags into the rear. 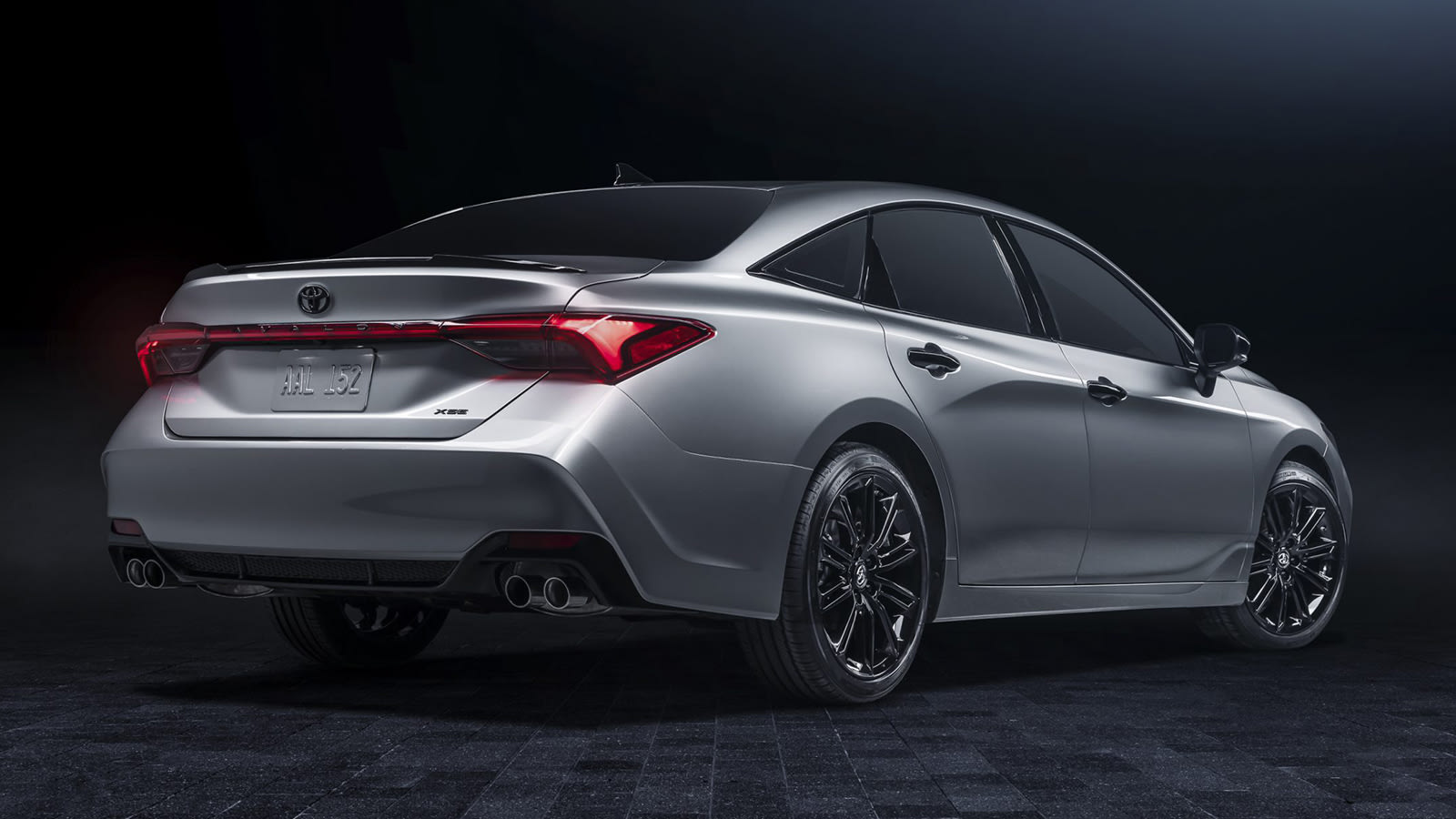 What are the Avalon’s fuel economy and performance specs?

The 2021 Toyota Avalon comes standard with a 3.5-liter V6, an eight-speed automatic transmission and front-wheel drive. This engine produces 301 horsepower and 267 pound-feet of torque. Fuel economy for the XLE trim is 26 mpg combined, whereas the XSE Nightshade, Limited, TRD and Touring trims all earn 25 mpg combined ratings.

The Avalon Hybrid powertrain consists of a 2.5-liter four-cylinder and a pair of electric motors. The combined system output is 215 horsepower, but it feels a bit stronger than the numbers suggest. Fuel economy is sensational for a full-size sedan (or any, for that matter), as the XLE trim accomplishes 44 mpg combined — the XSE and Limited are both rated for 43 mpg combined.

Opting for all-wheel-drive means you also get a 2.5-liter four-cylinder, but without the electric bits. It makes 205 horsepower and 185 pound-feet of torque, which isn’t a lot for a full-size sedan. It gets an eight-speed automatic like the V6 model. Unsurprisingly, fuel economy numbers slide in between the V6 and the hybrid with 28 mpg in combined driving. 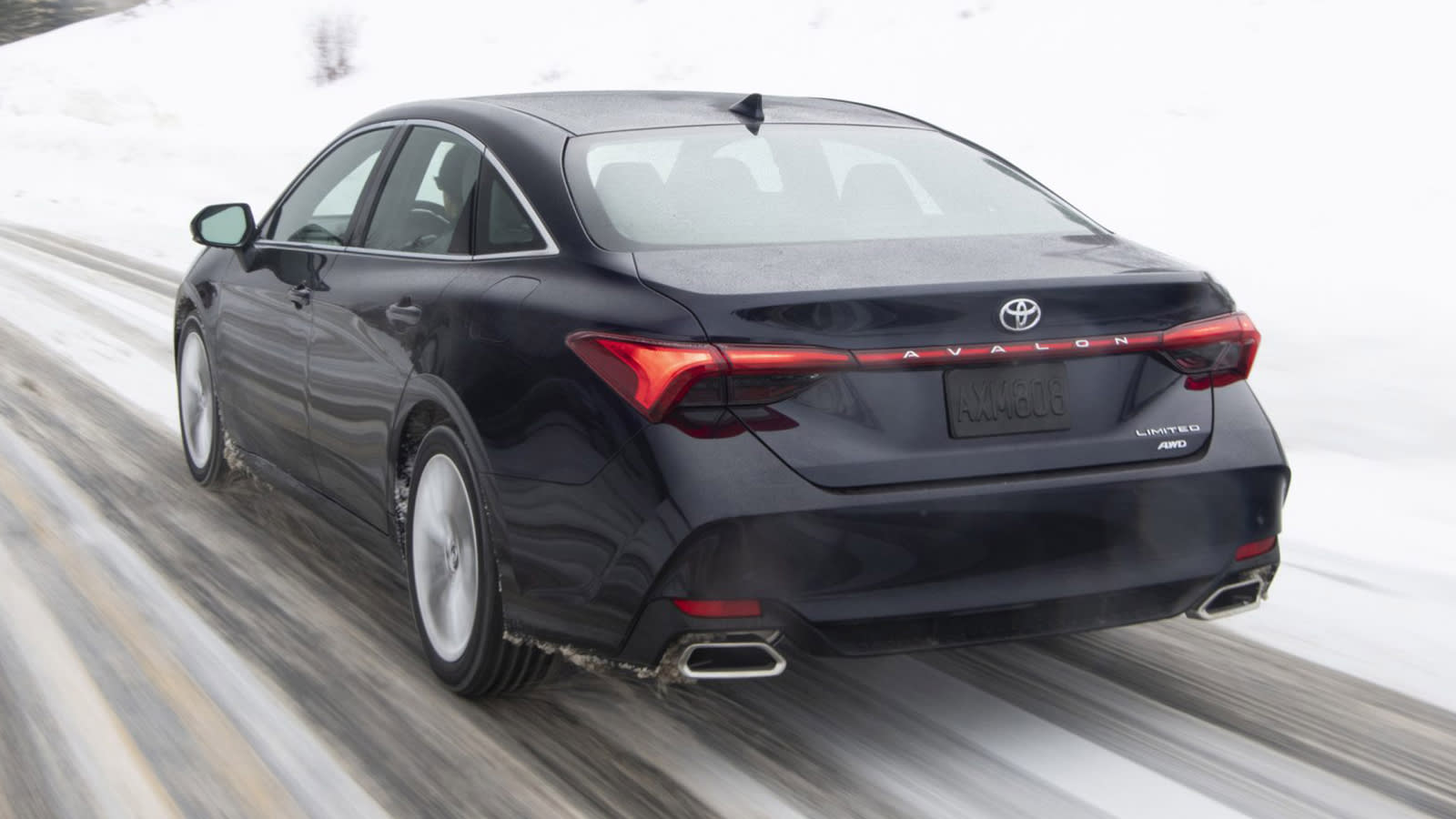 Each of the four trim levels has different tuning of the MacPherson strut front and multi-link rear suspension. Handling precision has improved for the XLE and Limited compared to past Avalons, but comfort remains the priority, and the suspension setup yields a softer ride. It’s still supple as always, but now body motions are kept nicely in check. The most comfortable variants are the XLE and Limited, whereas the XSE receives stiffer springs and sway bars that make it feel a little sportier, but all versions are reasonably engaging and responsive, while providing a smooth, comfortable ride. The TRD variant feels like a sports car in comparison to the cushy standard models, though the ride suffers quite a bit to deliver its surprisingly handling ability.

Similar to the hybrid, the four-cylinder in the all-wheel-drive model feels perfectly sufficient for the big sedan. Thanks to more sound insulation than the Camry the engine comes from, it also feels fairly refined. The all-wheel-drive doesn’t really change the handling characteristics much from the front-drive models, but should aid traction in inclement weather.

What Toyota Avalon reviews can I read?

Our impressions of the new all-wheel-drive Avalon, which also gets a non-hybrid four-cylinder. 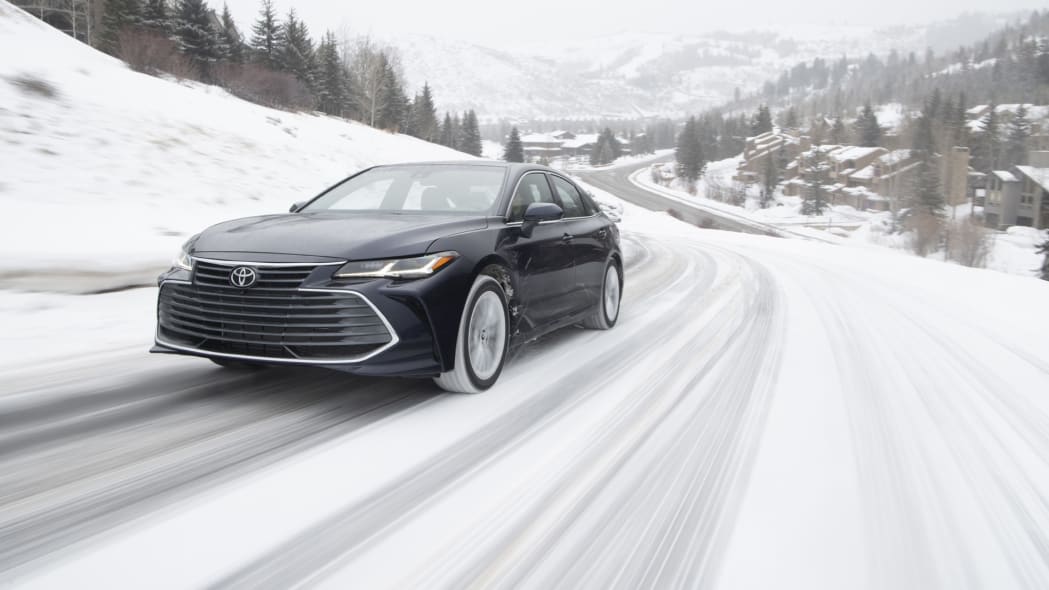 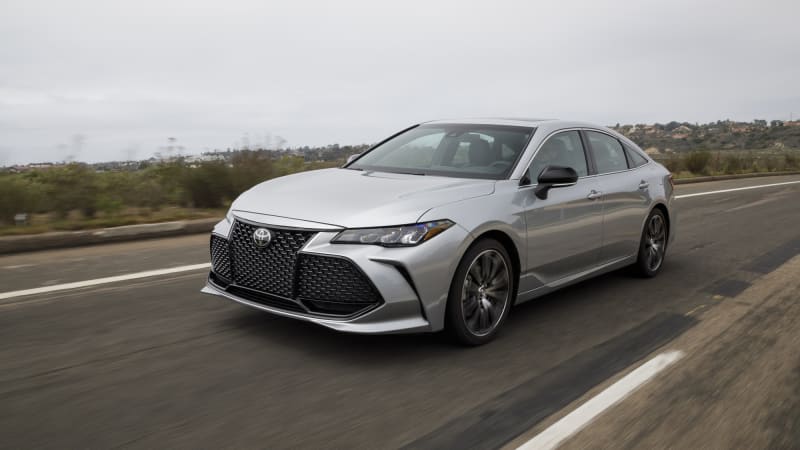 Don’t ask why. Toyota made a TRD version of the Avalon, and we drove it like a sports car. 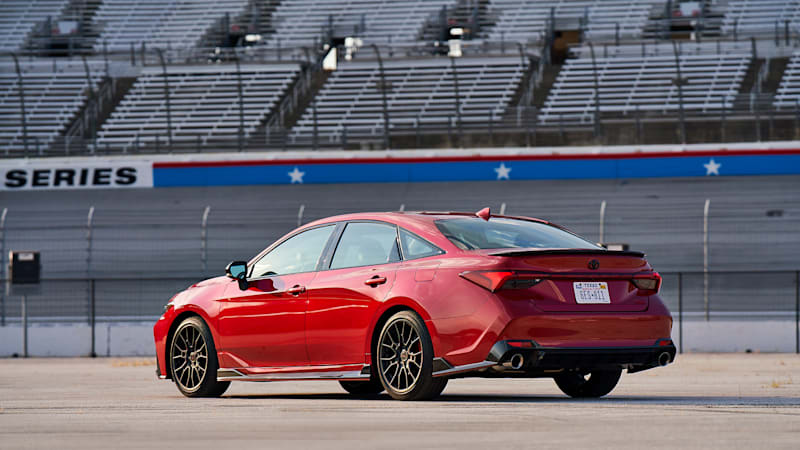 2019 Toyota Avalon vs. full-size sedans: How they compare on paper

There aren’t many full-size sedans left, but you can see how the Avalon compares to its contemporaries here. 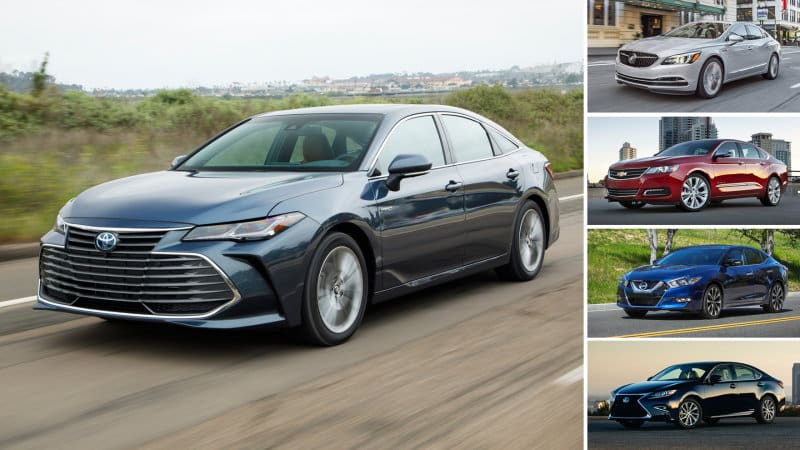 How much is the 2021 Toyota Avalon and what features are available?

Pricing for the 2021 Toyota Avalon starts at $37,080, including the $955 destination charge. The base price stretches all the way up to $44,355 for a Hybrid Limited, so it never reaches stratospheric levels.

For a full breakdown of features, specs and local pricing for each 2020 Avalon trim level, check out this page here on Autoblog. 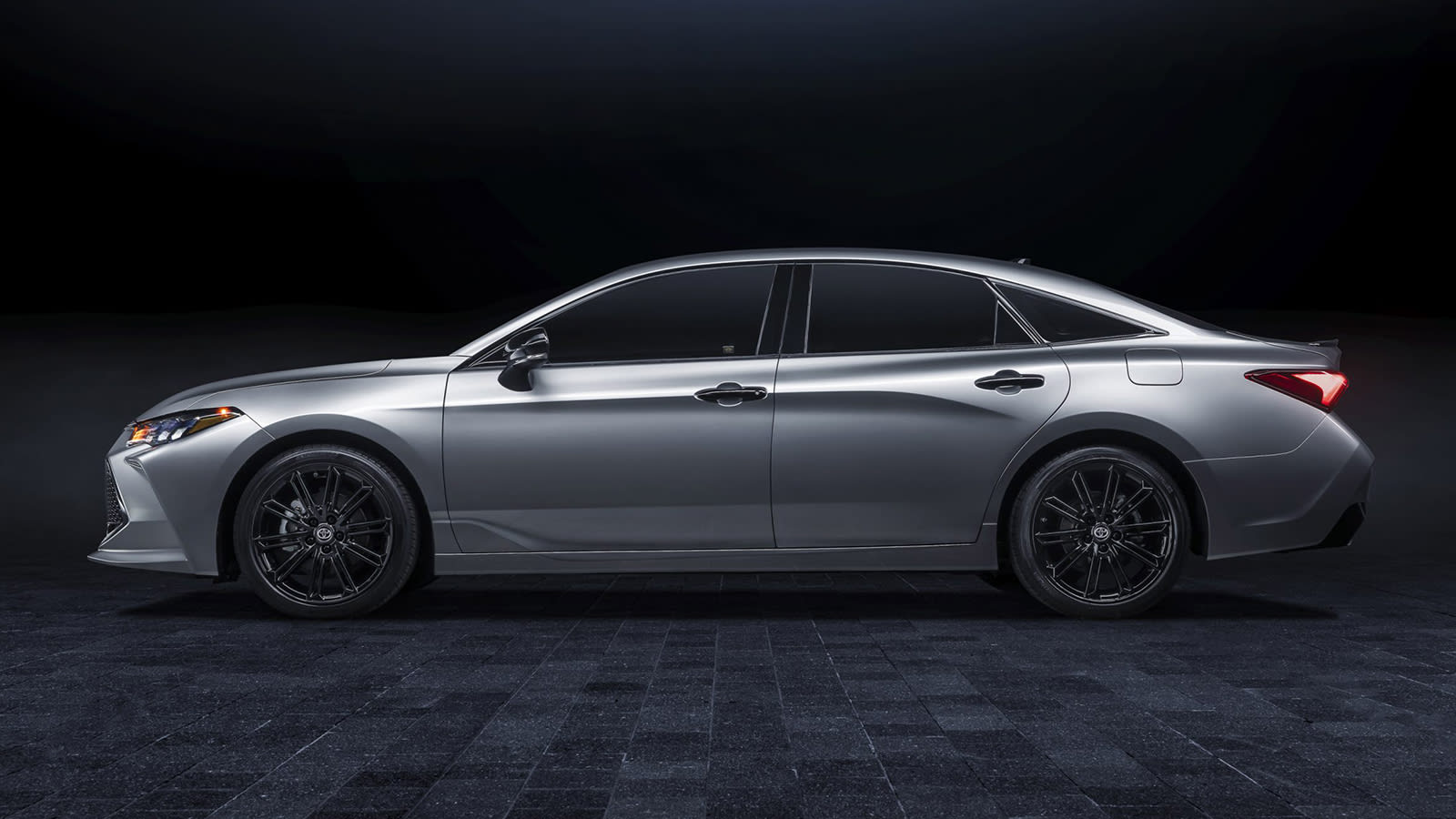 What are the Avalon’s safety ratings and driver assistance features?

The Toyota Avalon received a Top Safety Pick+ award from the Insurance Institute for Highway Safety last year, but no longer gets the rating. This is not because the 2021 is less safe, but because the IIHS made its requirements for the award stricter. As such, its standard LED reflector lights’ “Poor” rating precludes it from either Top Safety Pick commendation. However, the other ratings for the Avalon are excellent. The optional LED projector headlights got the highest “Good” rating from the IIHS. All versions of the car crashed commendably, receiving the highest possible scores in crashworthiness. Not only that, but the standard vehicle-to-vehicle crash prevention system received top marks, as did access to the LATCH child seat anchors. In government NHTSA testing, the Avalon also scored a five-star rating, performing well in all of its crash tests. Some of the specific tests (front driver, passenger side and rollover tests) returned four-star ratings, but every other crash scenario scored a perfect five stars.